Checked-in to the hotel and out again, in search of pizza, hehe. What? We've had one too many Laaps and seaweed snack! 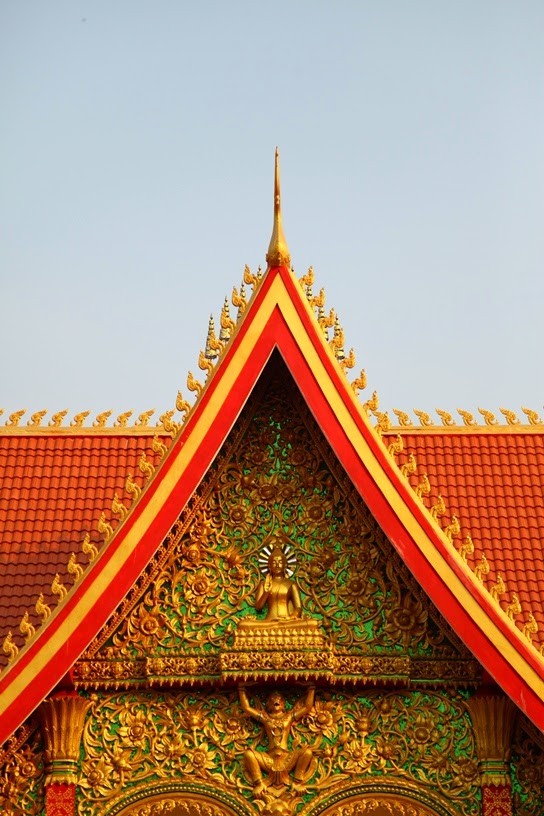 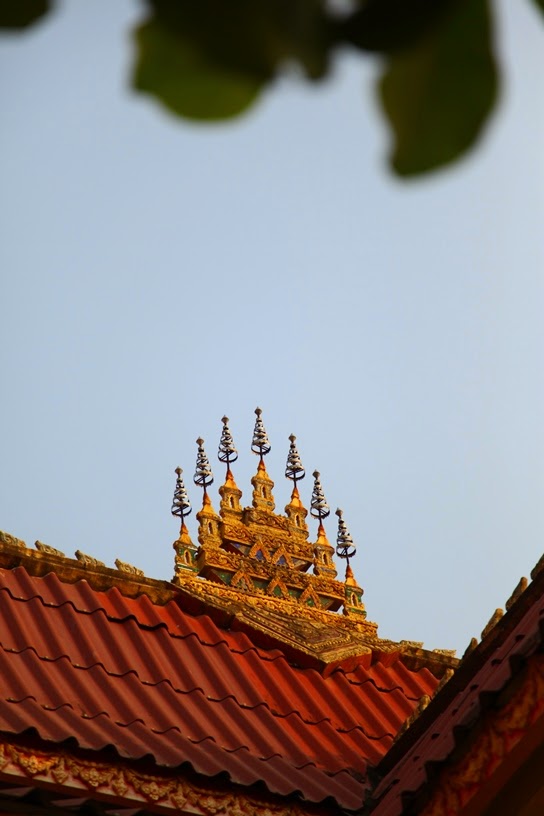 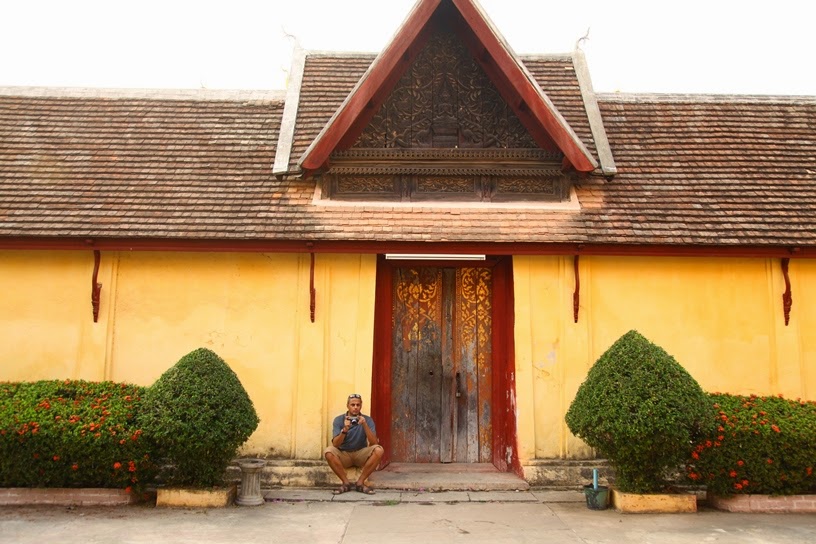 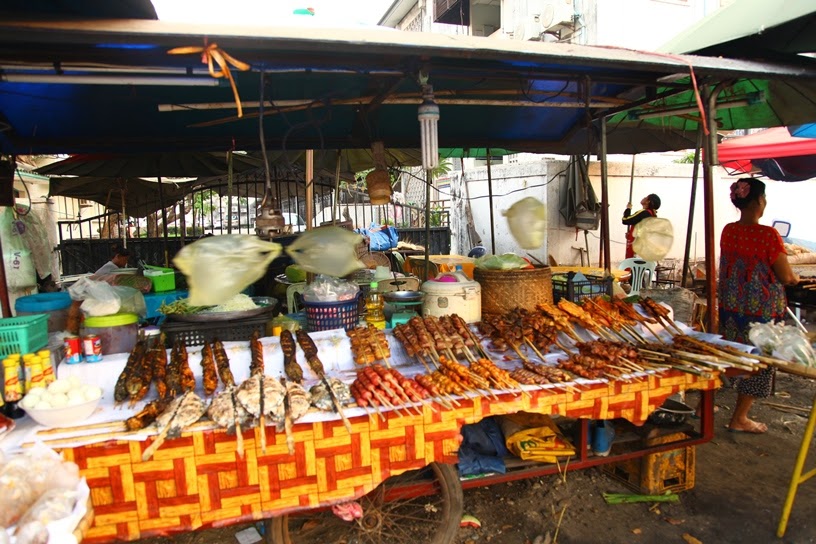 Just as warm, if not warmer than Luang Prabang - Vientiane has about 10 times more the population of LP. We explored the streets which eventually led us to a park where a night market is being set up.

It is undeniably THE place to be in the evenings. Locals of all age and sizes, some decked in exercise gear, wandered in the park. From a distance, a loud boom box blared with thumping dance music and a female's voice shouting in tune to the beats.

A large group of Laotian are gathered around three people on a makeshift stage (table tops) where they try to imitate the exercise moves of the instructors. It was fun to watch 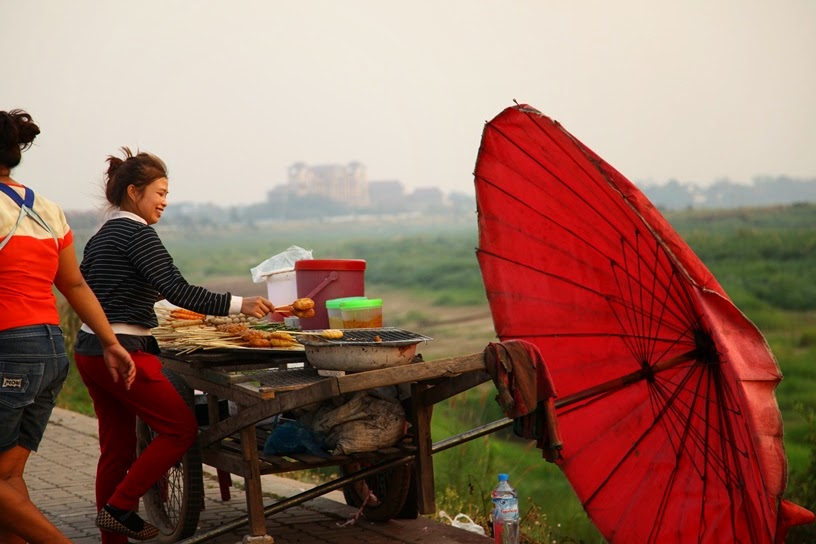 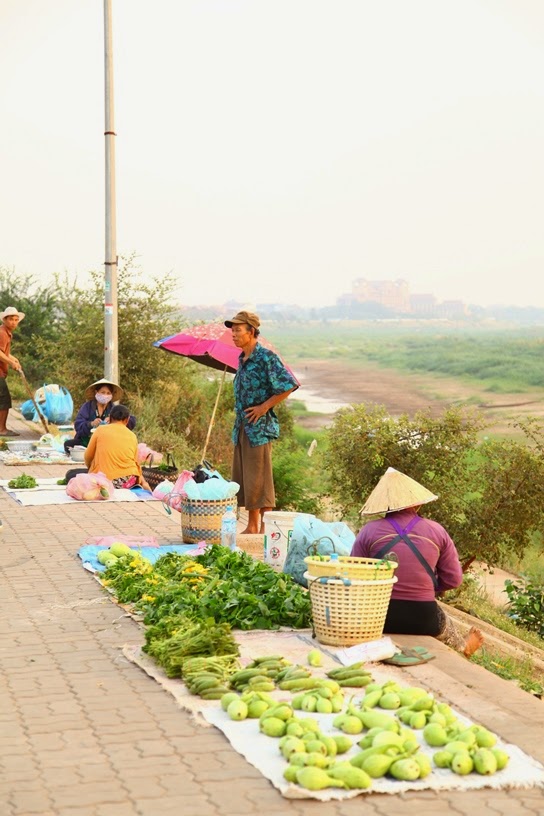 Our guide picked us up at 8:30 the next morning for a treat of wats all day long! 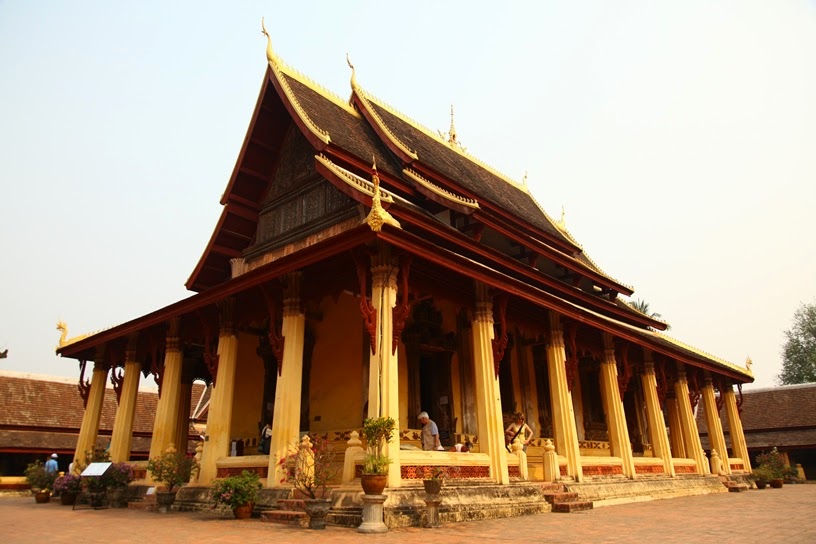 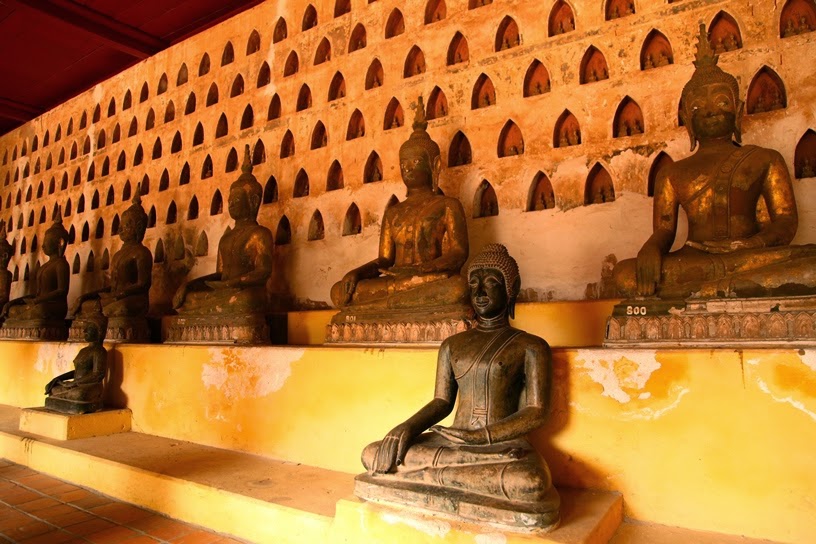 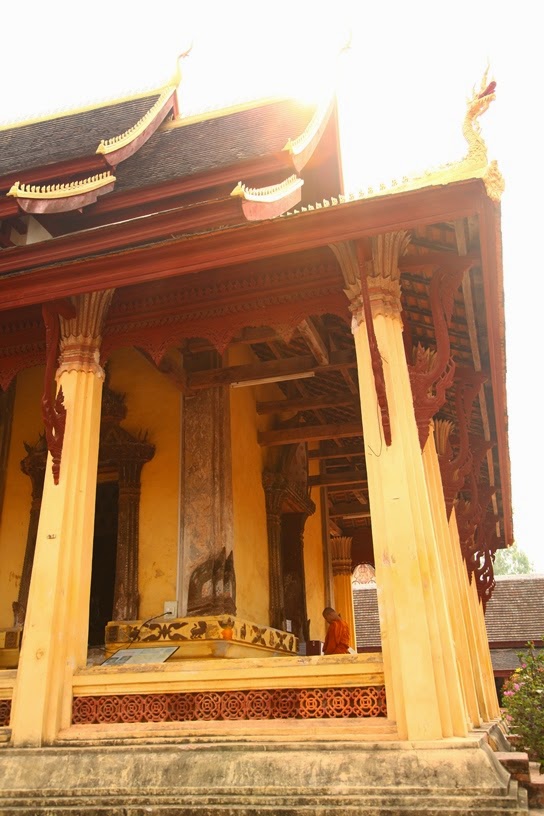 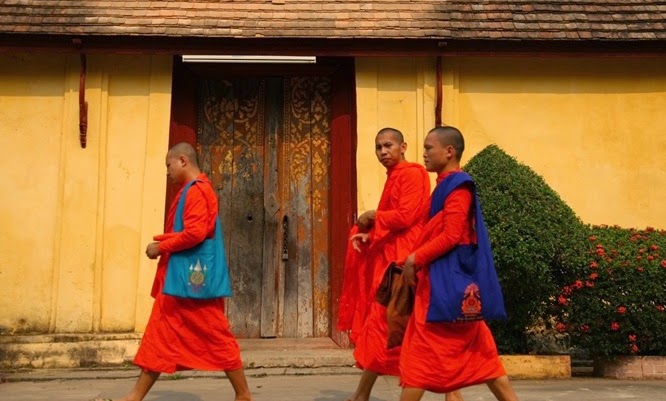 Swiftly followed by The Patuxay, Laos' answer to the Arc de Triomphe: 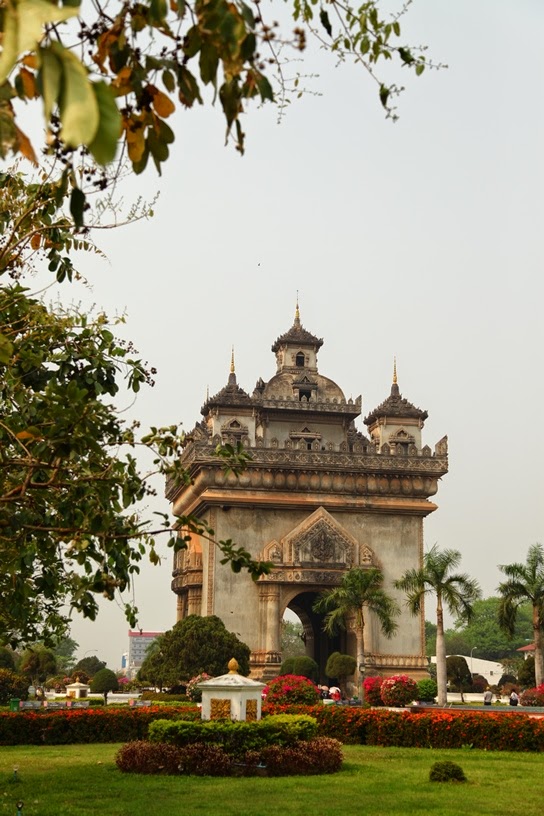 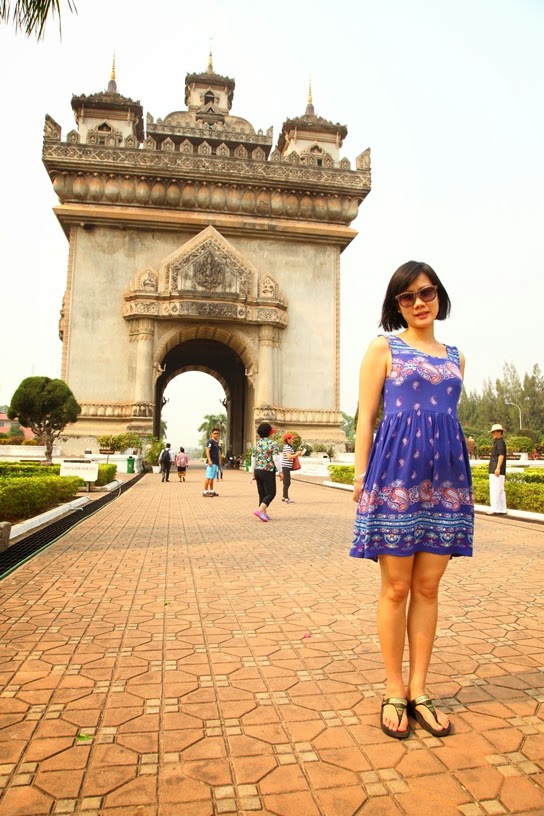 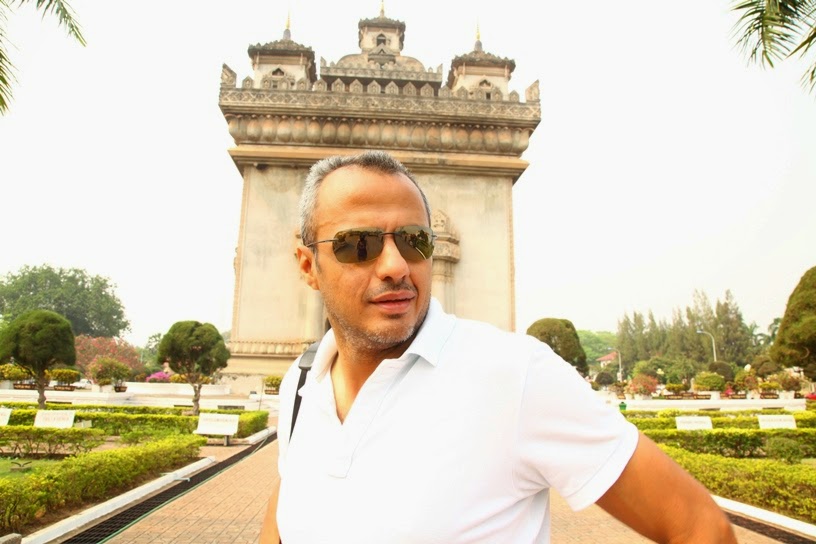 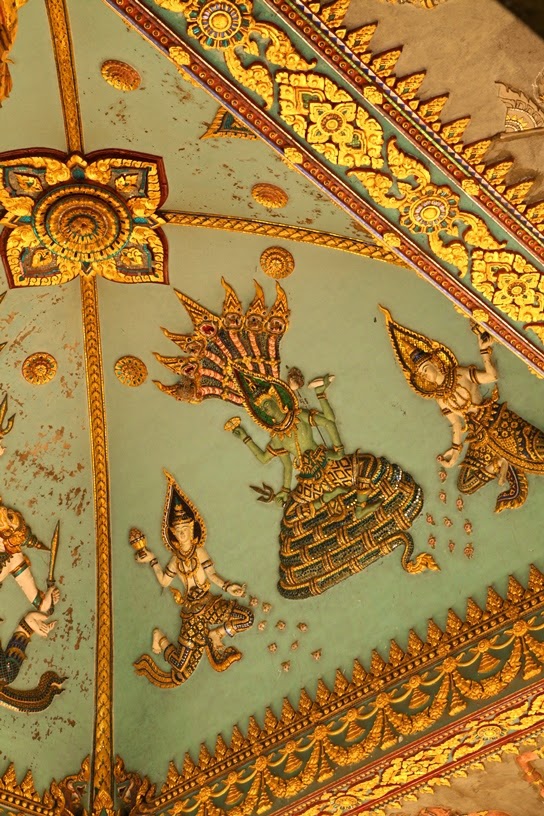 With less than $1, you can climb up to the top of the Patuxay. Throughout, numerous souvenir shops were set up, and graffiti filled the walls. 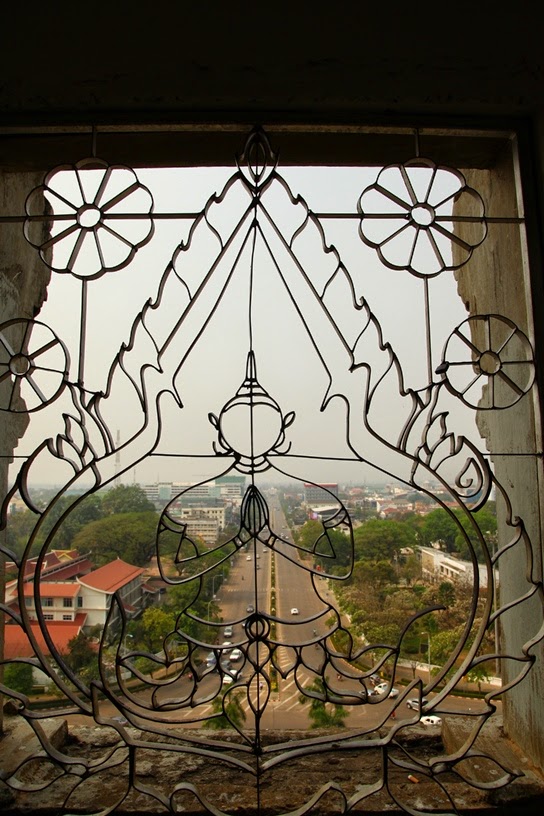 On the way to the Pha That Luang temple-


Every time we got into our van, we heaved a sigh of relief. We were quite tempted to quickly finish off the Wats so we could park ourselves in a comfortable air-conditioned cafe. What a life! 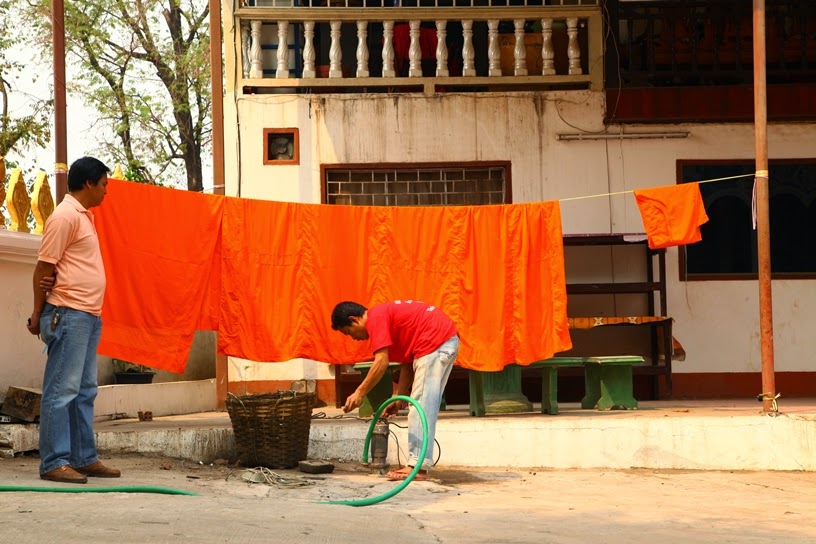 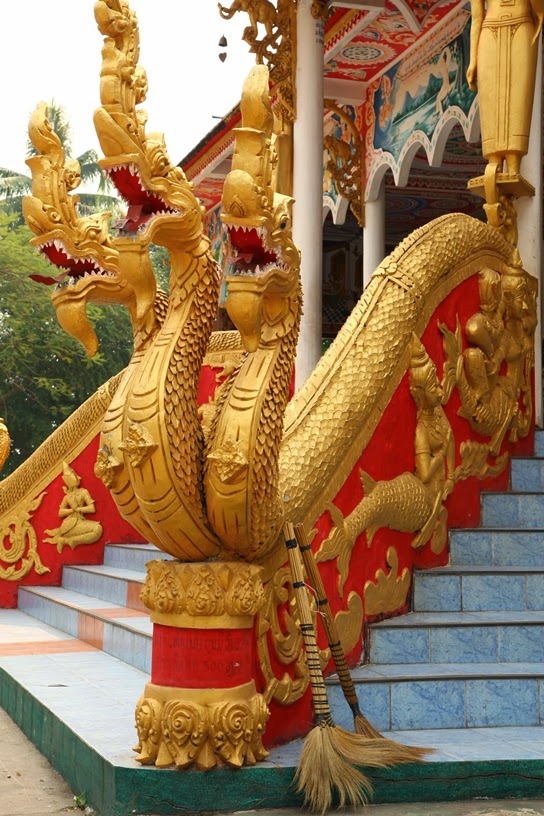 The Magical Dragons and the Enchanting Brooms 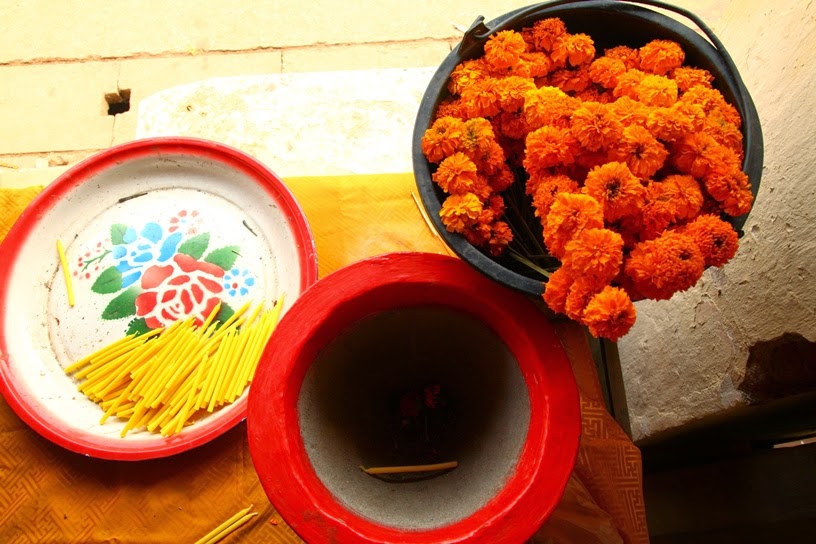 Offerings of incense sticks and flowers.

Pha That Luang, the icon and pride of Laos: 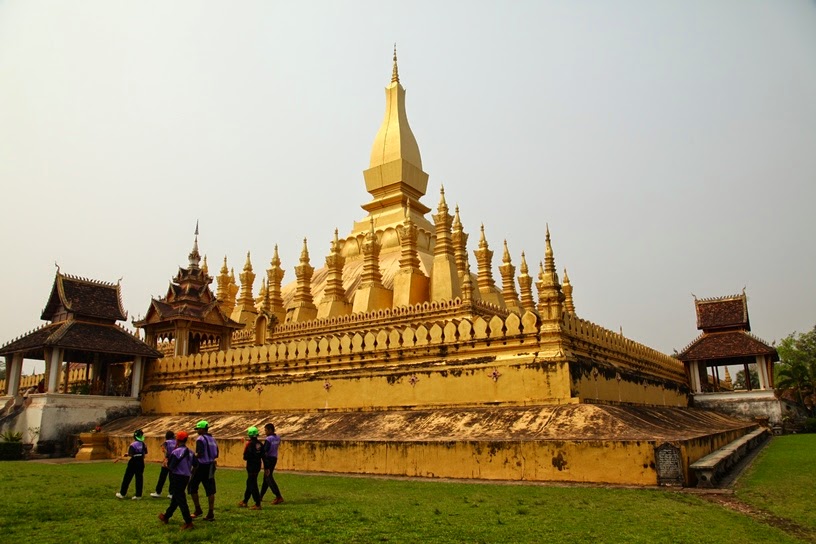 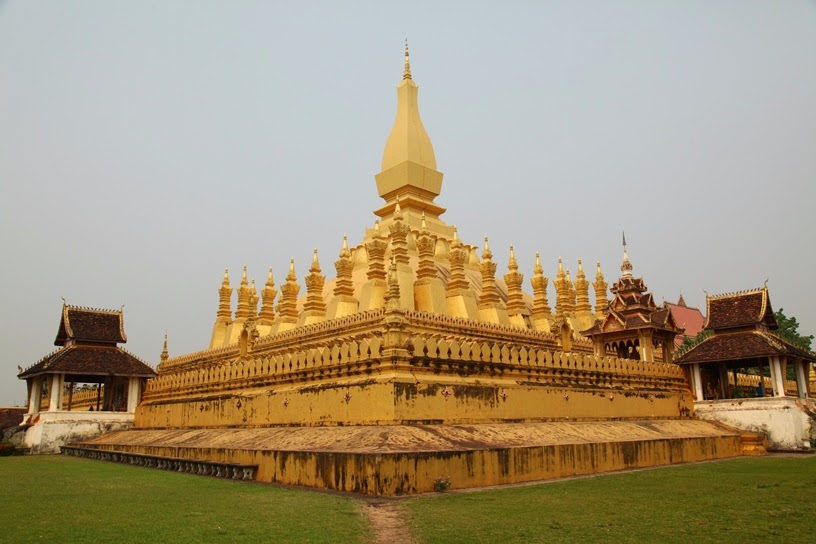 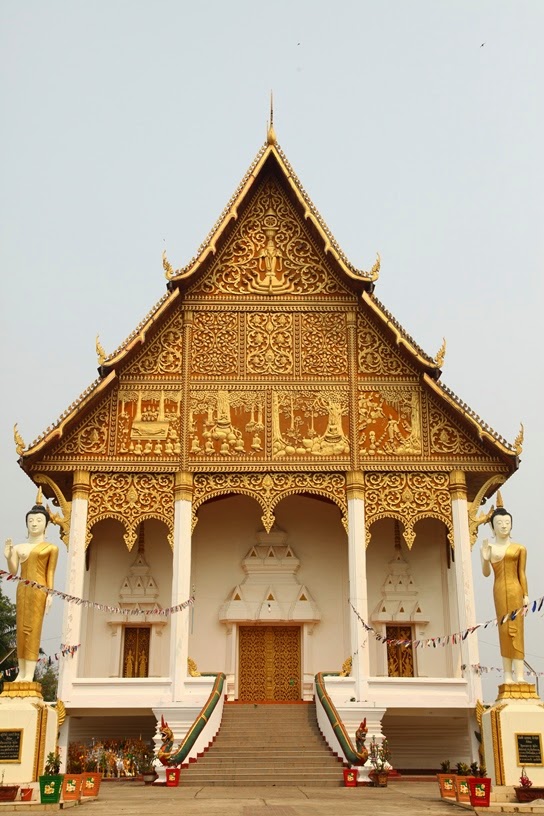 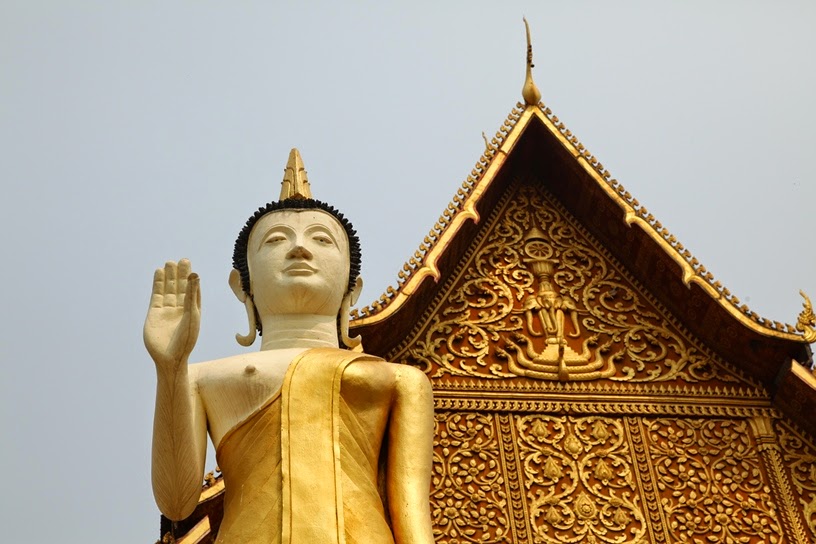 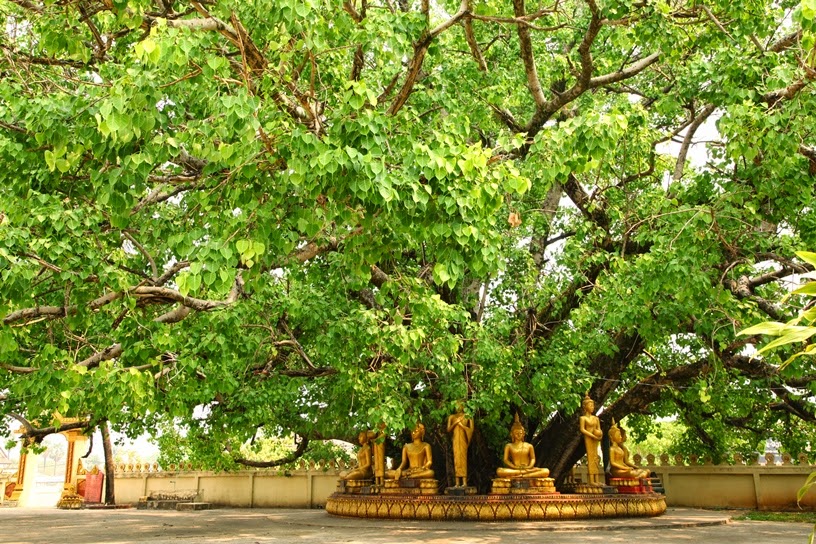 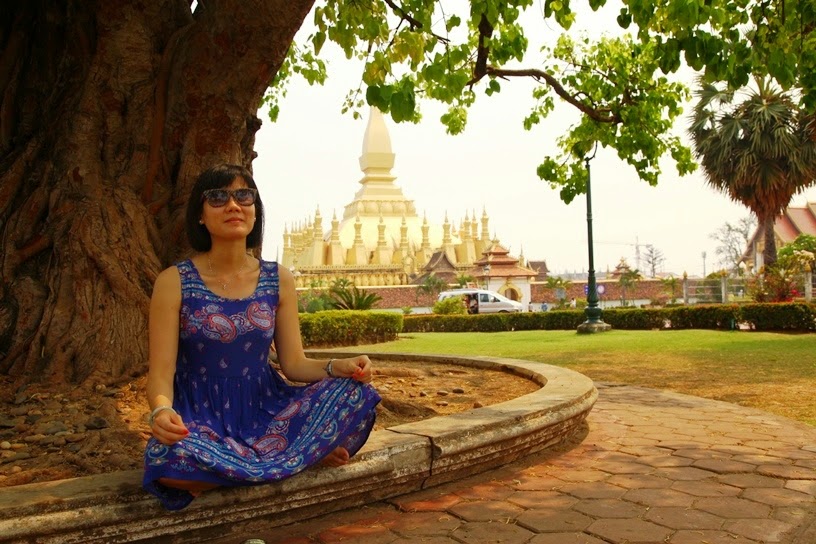 Enlighten was not me under a Bodhi tree.


To be completely honest, I wasn't quite as bowled over with the Wats as I had with other temples. I mean, don't get me wrong, some of the humbler temples have more personality to them. Shwedagon Pagoda in Yangon almost took my breath away, with the majestic jewel-studded stupa and best of all, there is a constant activity: local people bringing lotus flowers and offering a prayer - I just don't see that scene as much in Laos: the involvement of the local people. There were more backpackers than all of the incense sticks put together.

That isn't just for the temples; even for the rest of the attractions, there is a feeling of detachment - as though these are merely placed for the enjoyment of the tourists.

And finally, the Buddha park. 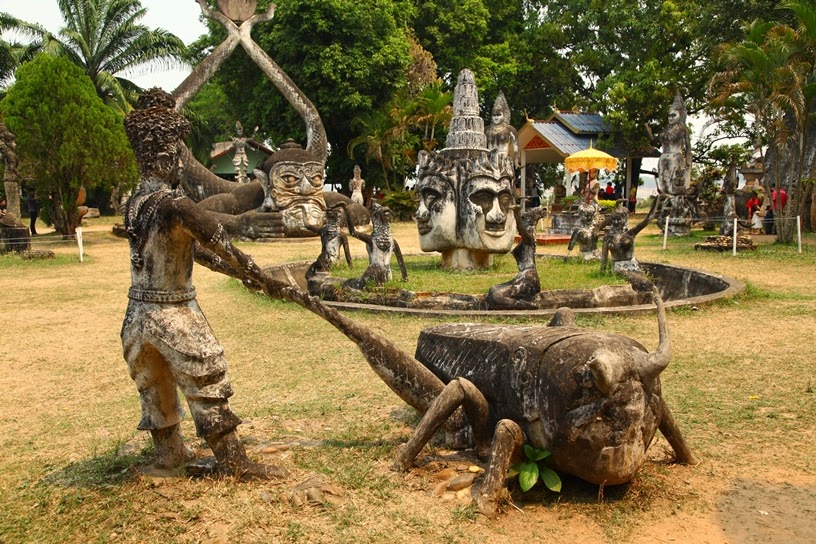 The Buddha pulling the nasty cricket monster's leg and thus saving the world from its evil. 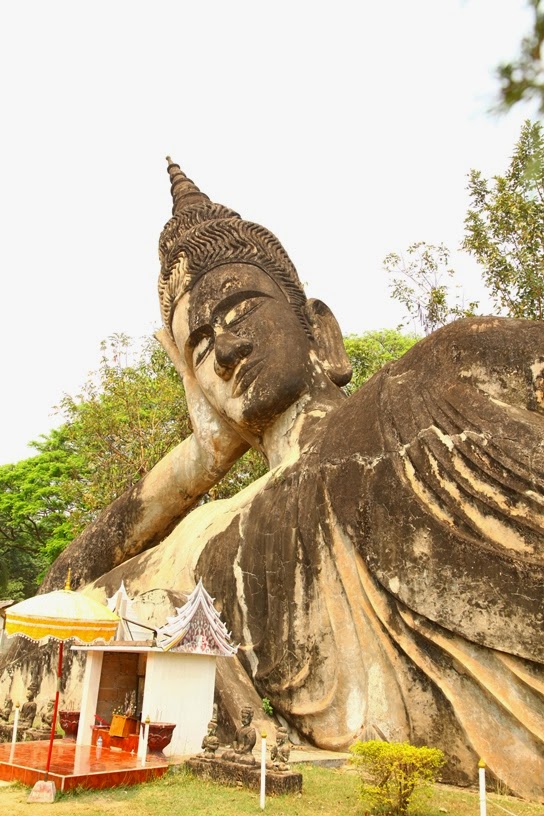 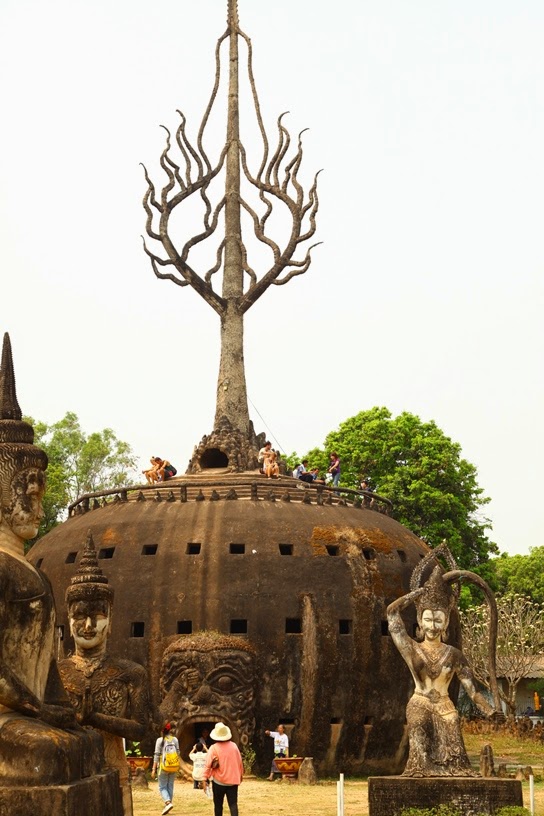 And that, and this medium-cooked chocolate cake (molten lava cake) wraps up the Laos adventure. It was so good, we went twice for the desserts! 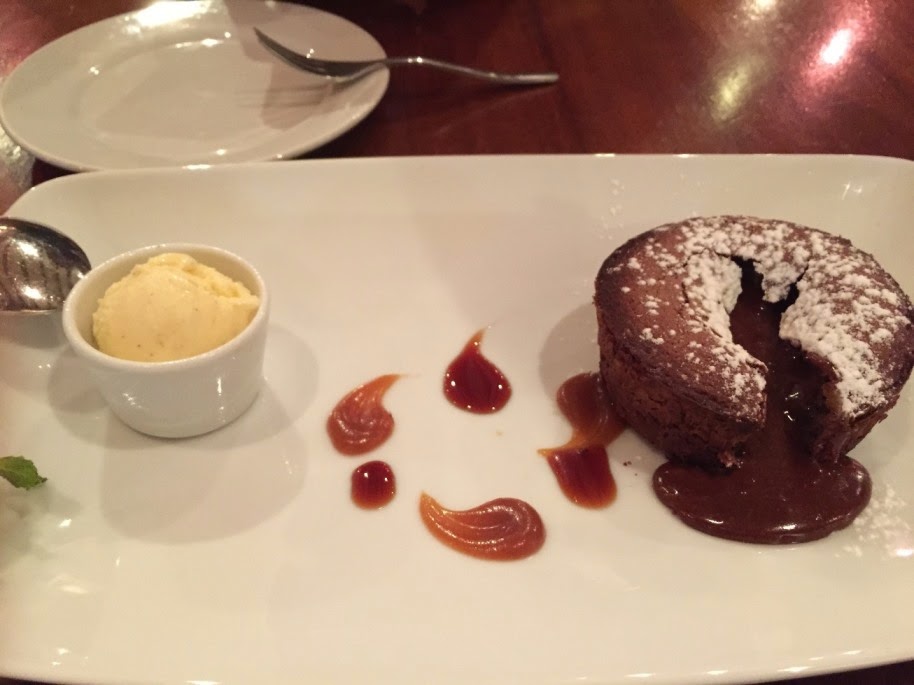