I was going to have a week-long break for the Eid holidays - so we were brainstorming how and where we should spend it. Europe remains a favourite during the summer (what's there not to like??) - but I reckoned one week is too brief to properly enjoy and fully utilise the time there (what with jet lag and all). We debated Philippines for a bit - for a spot of diving, though it isn't at the top of my bucket list.

After throwing ideas back and forth (over a few months, mind you), we finally settled on Turkey. Both feeling quite excited as we've not been, and so exotic!

.....So.... the obvious subsequent events to take place is a multitude of dangerous incidents bound to change our minds, right? And that, is precisely what happened. Deja vu!

Case 1: Planned a fun weekend in Phuket. Red shirt protests happened just the week before our trip. Curfew announced at parts of Thailand. We stubbornly proceeded. Everything was normal in the touristy part of Phuket. Holiday fun, check.

Case 2: Bought tickets to Hong Kong for a few days. Coincides with Occupy Central. Luckily, it was a peaceful protest and other than some roadblocks, nothing else hampered our trip.

Case 3: Turkey. She upped it a few notches for us though. A month before our trip, there was a bombing in Istanbul where 11 people died - claimed by ISIS. Then, just days prior to our departure for Istanbul, another ISIS bombing was reported at the Ataturk airport. Messages poured in from friends who asked us to reconsider the trip. Mum was best of the lot - instead of the usual barrage of nags, she reminded to go shopping for souvenirs, and specifically to purchase hand-painted plates for myself, hehe.

Despite all of the bad rep surrounding Turkey, we made up our minds to visit. And we are really, really glad that we made the final call. 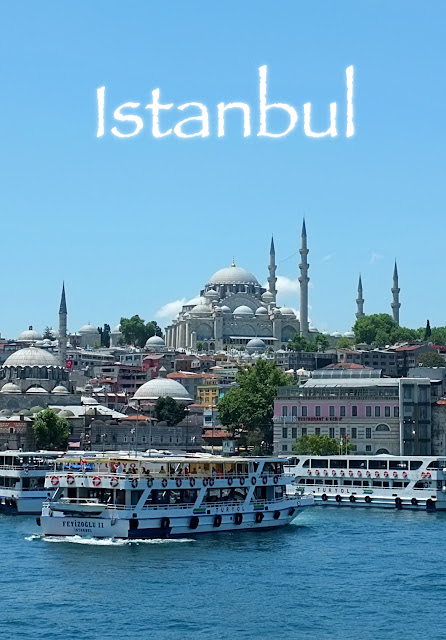 Turkey is one of the most beautiful countries I've visited. More accurately, it is unlike any other city I've been to. The diversity of its food, the grandeur of its monuments, the friendliness of its people, the beautiful handicrafts... I could go on and on.

When we first arrived, we were surprised to see how empty the city is. Not that we were complaining. Long queues to the Hagia Sophia? Didn't happen to us. Jostling with the crowd in Grand Bazaar? Shopkeepers were practically shoving freebies into our hands to get their first sale of the day. It's great for us shoppers, but it's also sad to see the locals having a hard time to get by. Saying all that, I do wonder if it was all for show? Make a sob story and bank in on the sympathy of the tourists. I guess I'll never know.

The slow tourism was a temporary respite. Soon after the Eid, the streets were filled with people again, with an almost tangible festive cheer in the air. We realize later, that the locals usually leave the country for a holiday overseas over Eid.

Anyway, jibber-jabber aside, I am here to give you some nifty tips 'n' tricks. Your holidays in Istanbul won't ever be the same again! *wink wink*


Itinerary
Our itinerary of 8 days are made up of 4D in Istanbul, 3D in Cappadocia, and one final night on the Asian side of Istanbul - Beyoğlu.

From Kuala Lumpur, I flew in to the Sabiha Gökçen International airport via Abu Dhabi (that rascal actually tricked me into thinking he is flying through Dubai and suddenly plopped on the seat beside me at the gate in Abu Dhabi! <3)

Dresscode
Before the trip, I searched on the Interwebz for some clues as to how to dress. Some were most conservative, advising to cover up; whereas some were more liberal - dress like how you will in any other European cities, they said.

Well, I beg to differ. In, say, Paris or London, I could put on a pair of shorts and a tank top - nobody bats an eye. In Istanbul, as far as major cities go, the local Turks are dressed conservatively. Some with headscarves, mostly in long skirts or pants and covered up. The only instances of shorts or sleeveless tops are worn by foreigners - and even then, they are the minority.

Digressing, we were on a food excursion to Asitane, somewhere on the outskirts of the city. To get there, we had to pass though residential area and the quieter neighbourhoods. On that day, I decided I will wear shorts (I had been wearing long dresses the past few days, but after noticing some people wearing shorts, I thought I'll be more comfortable in the summer heat). Throughout the walk, I started to become acutely aware of how my exposed legs were drawing attention (I actually thought I heard an old, geezy man letting out a sigh). Feeling increasingly conscious, I withdrew an emergency scarf from my bag and transformed it into a makeshift knee-length skirt.

My advice, go conservative. Respect the local culture and cover up! This means, wear something that reaches your knee at the very least, and a sleeveless top as your maximum exposed limbs. Cleavage - don't even go there!

To enter the mosques, you need to be fully covered - long sleeves, long pants, the whole works - and a headscarf to cover your hair. No biggie if this slips your mind, cause at the entrance of the mosque, scarves and long robes are provided at no extra charge for visitors.

These are some of the thoughtful little things I like about Istanbul. A far cry to Milan: we were queueing to enter the Piazza Duomo, I got a bit of a rude shock when I was told that my dress was too short (a couple of inches above the knee) and was refused entry. A bunch of opportunists then shoved an armload of colourful scarves in my face, hoping to cash in on my need (but we did not enter eventually).

Our trip was free and easy: we do try to plan our routes so we don't double up too much. It is not an easy feat, what with the various foodie spots we were keen to go! 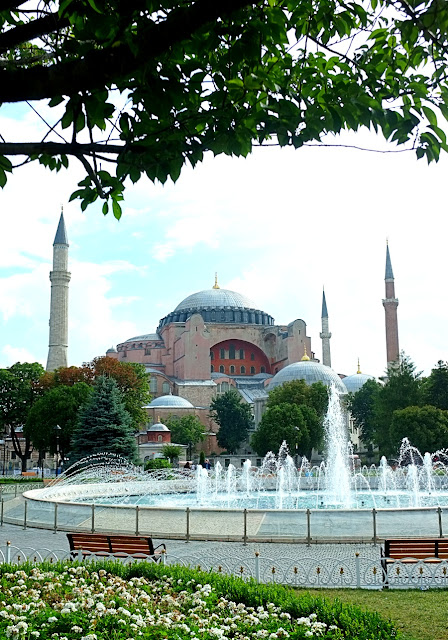 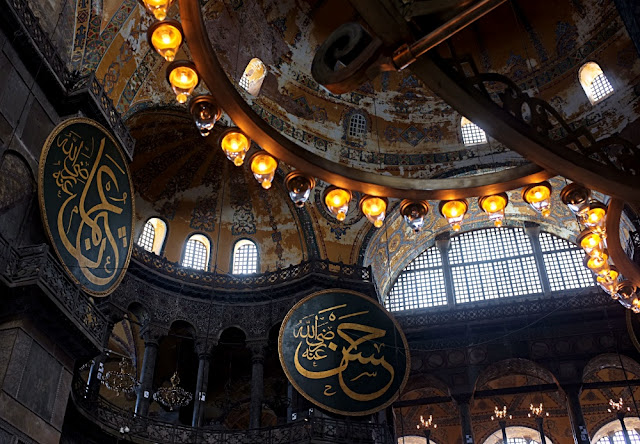 The majestic Hagia Sophia. I stepped in and felt my jaw drop to the ground. And this with an entire wall covered in scaffoldings - the awe that would have inspired otherwise... 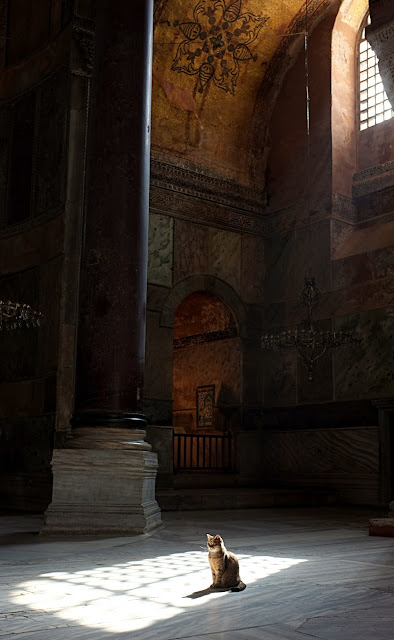 Strays lead a good life here. Bowls of cat food and water are put out for these ungrateful creatures. Dogs too, wander freely, even though it is a predominantly Muslim country. Something you'll never in Malaysia, sadly. Quite a mystery it is, with the vast number of strays in the city, we've not come across poop! (Paris, learn!) 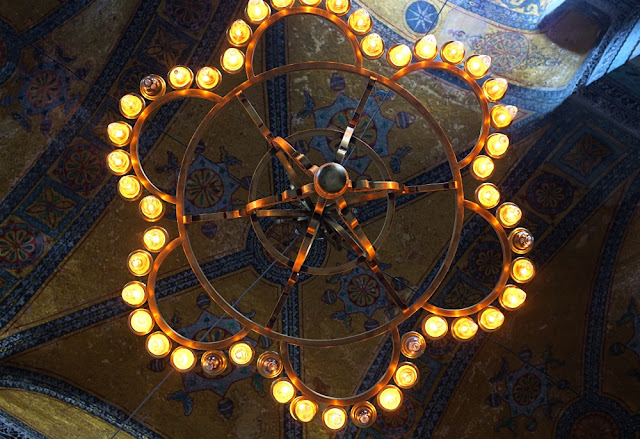 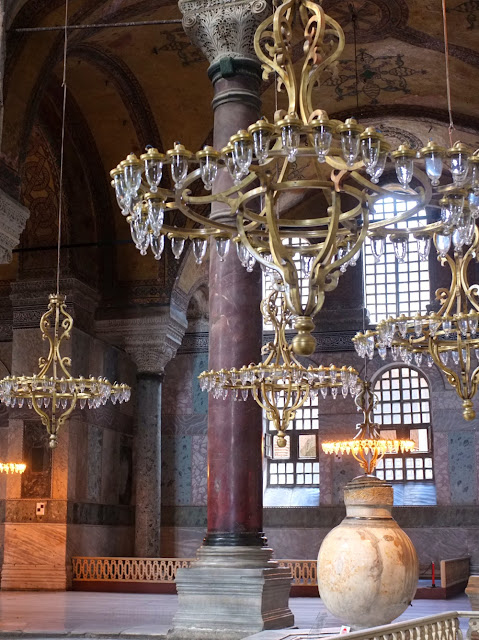 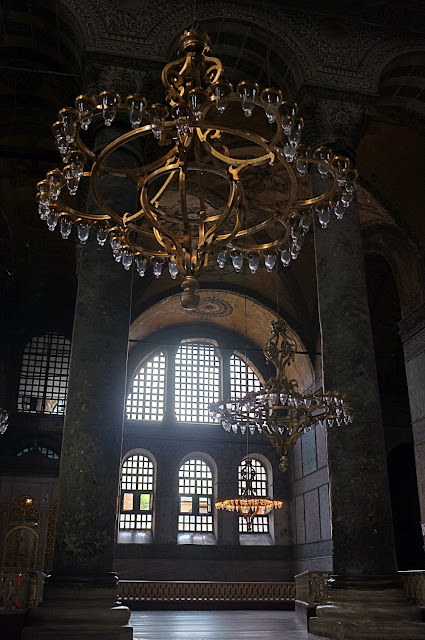 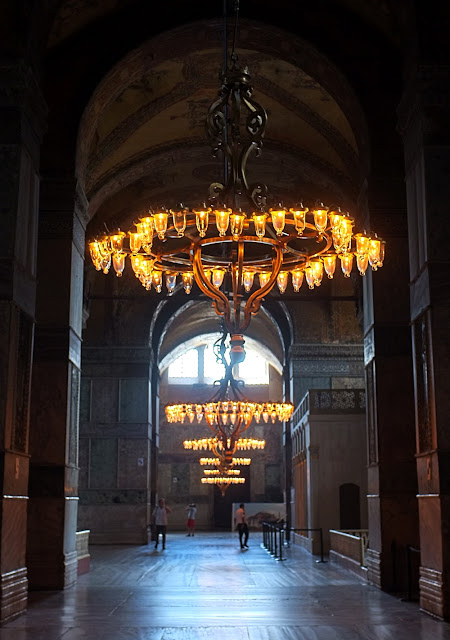 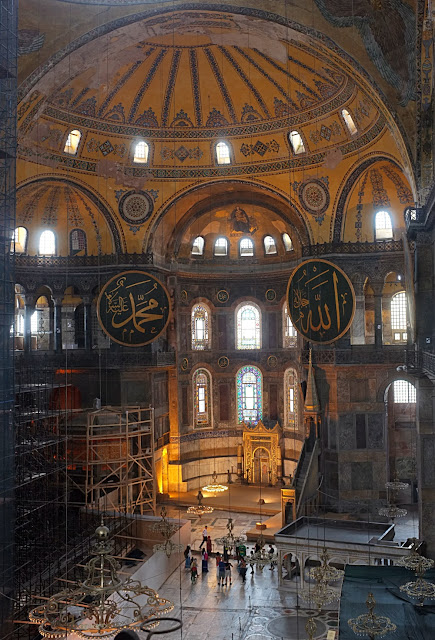 And the Hagia Sophia at dusk... 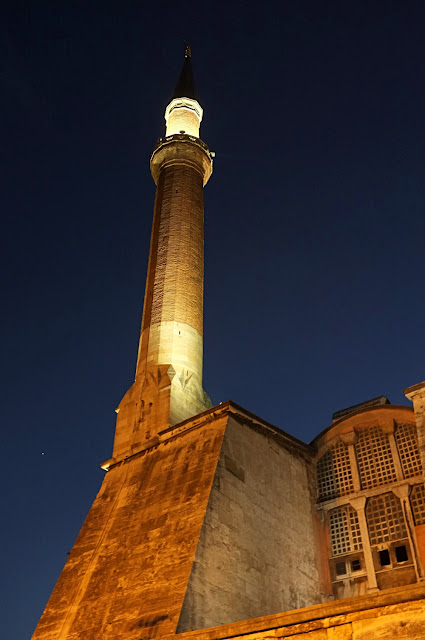 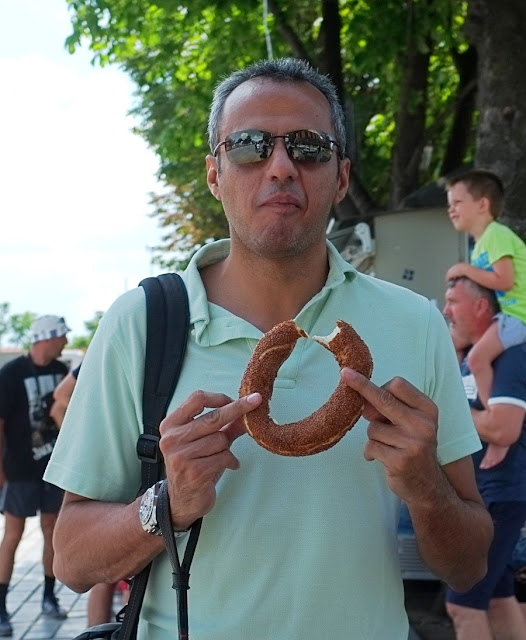 Chomping on a simit - a Turkish bagel with sesame seeds - from a street side peddler. Various snacks are being sold by peddlers: roasted chestnuts, grilled whole corn (my fave!) and other baked goods. 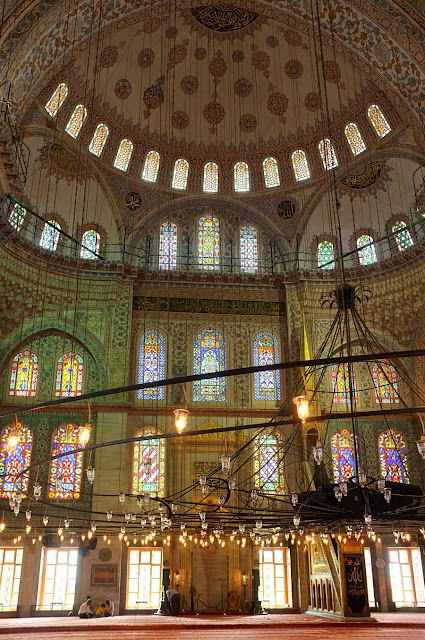 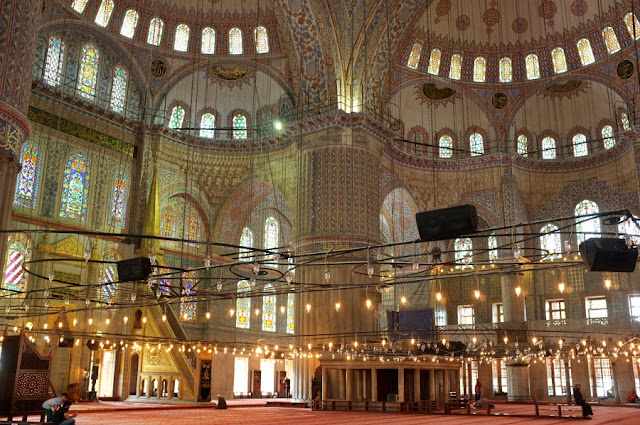 The tall ceiling but low chandeliers are quite a sight. I can only imagine the hall filled with men in white robes. 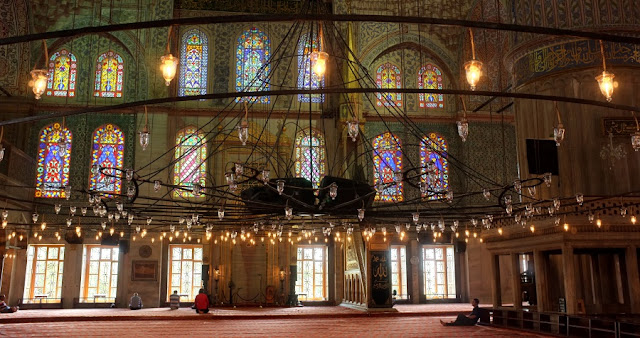 And moving on to the Topkapi Palace.

We spent a good few hours exploring the palace/museum - do go and visit! My favourite is the kitchen quarters - studying how preparations were made, and the changing wares used through the times.

An epic quote from the palace: "During the Ramazan, the royal family refrained from using gold wares. Instead, yellow plates are used due to their resemblance to gold". 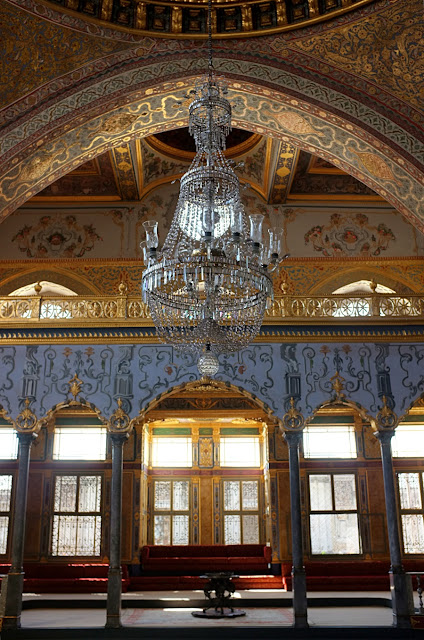 The Harem - such luxury! 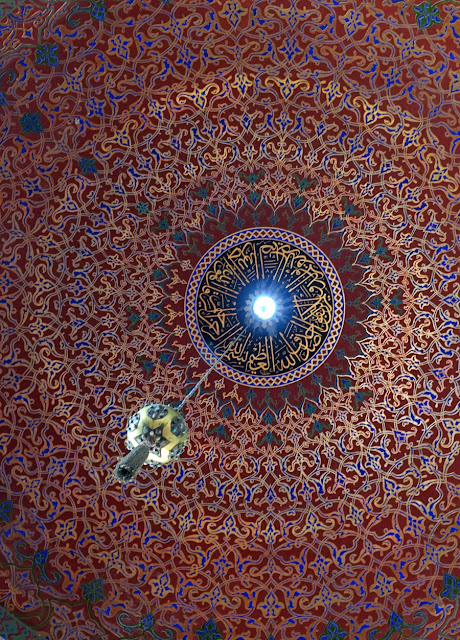 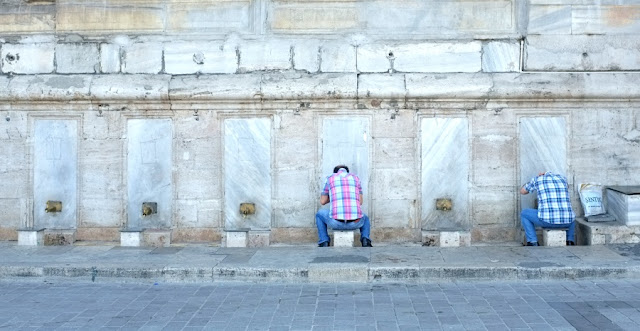 Next stop: The Grand Bazaar. I am in love with this market!!!

Markets are my absolute favourite haunts in any city. Of course, not all of them are pleasant. Some can be downright nasty, while some a total ripoff before you even step in. In Vietnam, we were harassed and practically bullied into buying goods! I've had some shopkeepers who had rattled to me in Vietnamese when I said I'll come back later. In contrast, Laos, the people are friendly without being pushy. European markets are more relaxed, some of the sellers look like they can't be too bothered whether you purchase or not!

The Grand Bazaar (and some photos may be from the Spice Bazaar) is a feast for the eyes, ears and nose. Intricate and high quality handicrafts, I have to say. I go all mad over the hand-painted ceramic bowls and plates! I bought 2 plates and a bowl - wish I had gotten more now! Then there is the copper coffee pots, pepper grinder, colourful glass lamps, ceramic wares, a billion types of spices, sweets... plenty to keep you busy poking your nose in! 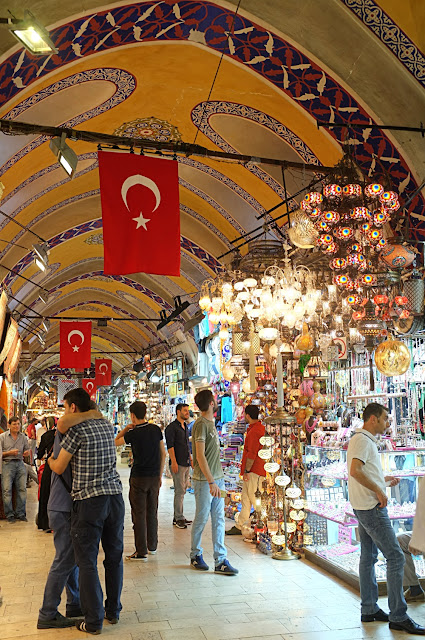 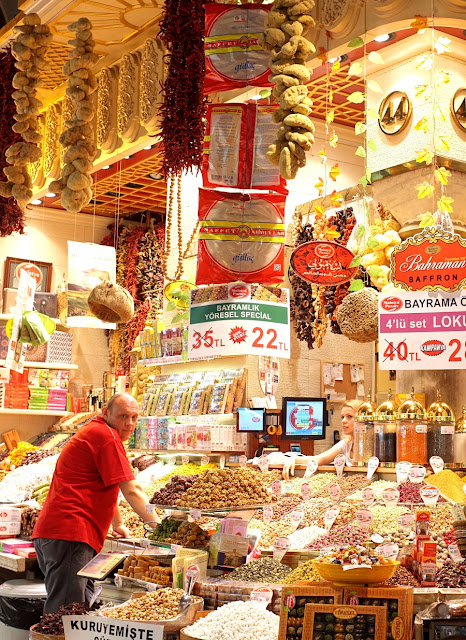 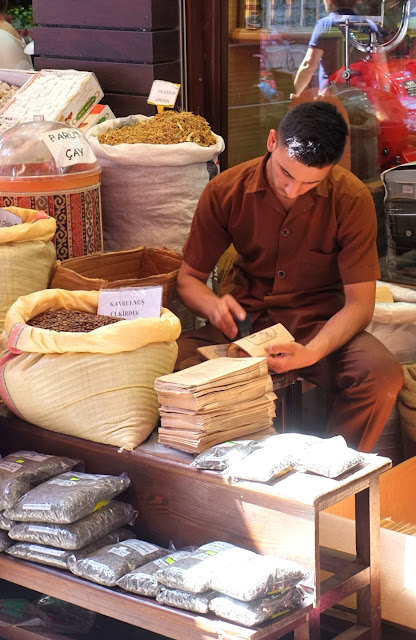 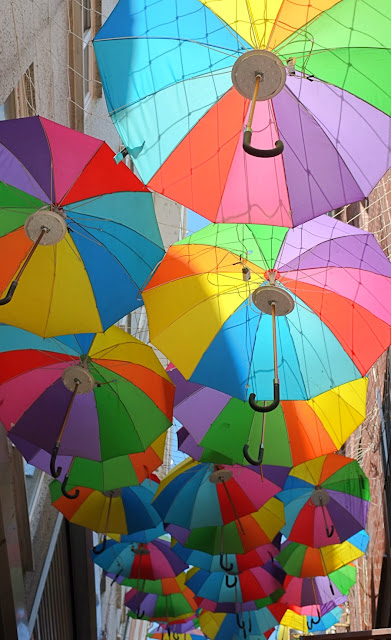 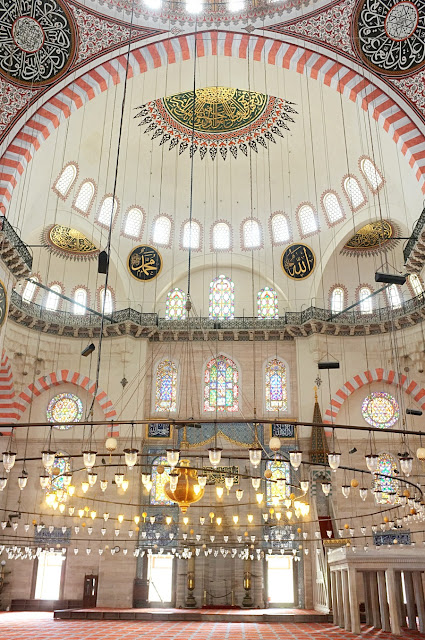 This mosque seems to be more low-key compared to the Blue Mosque. We sat for a bit at the tourists' section (the praying area for Muslims is a separate section), while enjoying the cool breeze.

Speaking of weather: the summer is warm, but not humid. In the shade, the breeze is a delight. But the sun is harsh, and can be uncomfortable. Pack a hat and slap on sunscreen! 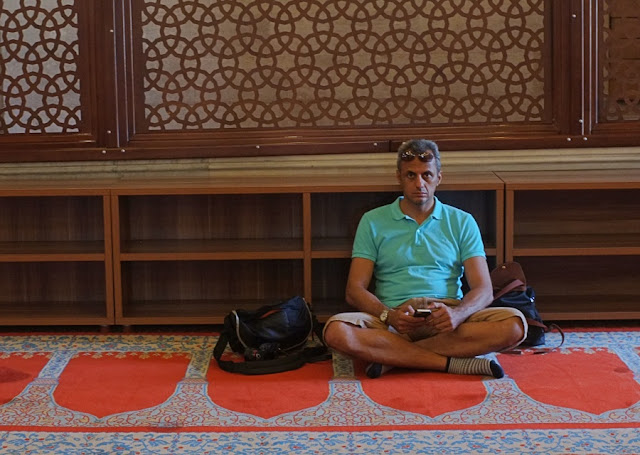 All covered up for the mosques: 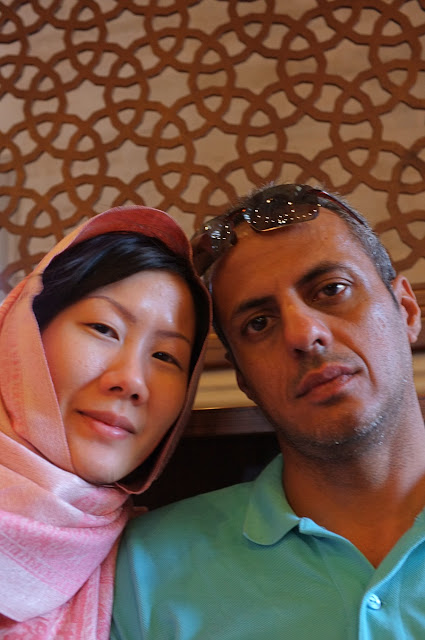 Exploring the Taksim Square in Beyoğlu. The streets are vibrant: live music, food vendors, decadent sweet shops (which we frequently popped in), antics of the ice-cream sellers..... there is constantly something going on! 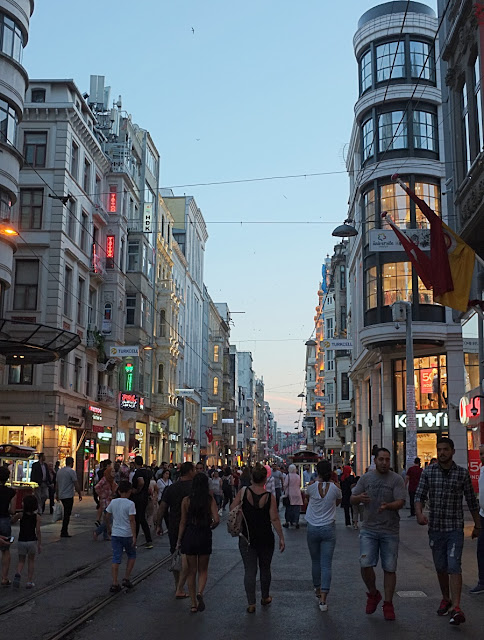 We also did the Bhosphorus cruise, heh. I know, it all sounds very touristy, but hear me out on this. Some of the sights aren't possible to view through land, just like this photo below.

On the cruise, we were ushered to the top deck with at least 30 other tourists, including small children.  We had to quickly grab our plastic chairs and parked them strategically for best viewing point (without having raindrops splashing on us, oh yeah, it rained). Loud, dance music blasted on the boat (strongly reminded me of the Andaman's Green Ocean, which blasted Indian dance hits, hehe) and occasionally, the tour guide speaks over the PA system in Turkish. Too funny! 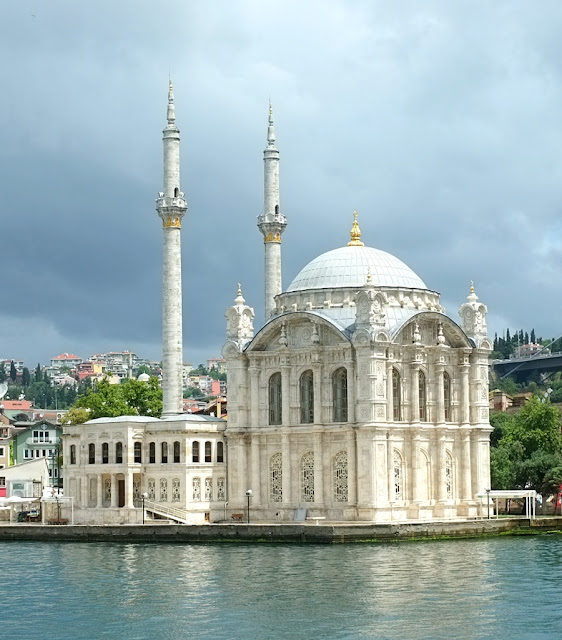 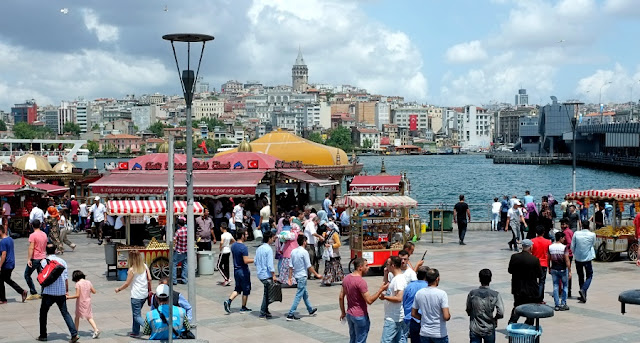 Aaaand, there you go. By now I'm betting you're exclaiming, but there are no food photos! Blasphemy!

Indeed, that's cos Turkish food deserves a post of its own. That'll be up next!