Miri: Weekend of Swine and Booze

The entire Internet was drowning in numerous websites, all covering different ways to get from Bandar Sri Begawan (BSB), across the Malaysia-Brunei border, and into Miri, Sarawak.

Any information from Kuala Belait to Miri by bus, however, seemed to be strictly top secret.
(Kuala Belait, or KB, is the last township North West of Brunei before the Malaysian border).

We wanted to depart from KB as it'll be faster to drive directly into the town, then hop onto a bus to Miri from there. Things would have been less complicated if we could drive the car into Malaysia, but the Brunei-registered car needs to carry a Vehicle Import Permit - which then requires all sort of paperwork, and nobody likes paperwork.

Bus to Miri from Kuala Belait

Bus departs twice a day from the main bus terminal in Kuala Belait @ 9:30am and 3:30pm. Tickets are BND$15 one way. We did not book these tickets in advance.

The bus from KB is the same PHLS express (a bus service company) from BSB (departs at 7:00am and 1:00pm). So it took the bus approximately 2.5 hours from BSB to KB (plus a stop in Seria town). Driving from BSB to KB only took us slightly over an hour.

Whoa, that is a fair bit of abbreviations! Ok, here's a table to simplify things.


The 7am bus from Bandar Sri Begawan will arrive at 9:30am in Kuala Belait, then Miri at 11am, and so on.

We'd wrongly assume that buses depart frequently from Kuala Belait, and so, arrived KB at 12:30pm.... only to find out the next bus is at 3:30pm. With 3 more hours to kill, we checked for places to eat in KB. We drove to a popular duck rice only to find out that they've sold out. The shop next to it said they're closing (at 1pm on a Saturday??), and so we drove back to the main square on KB.

We scavenged for food on the main street and popped into a Chinese eatery for some pork! 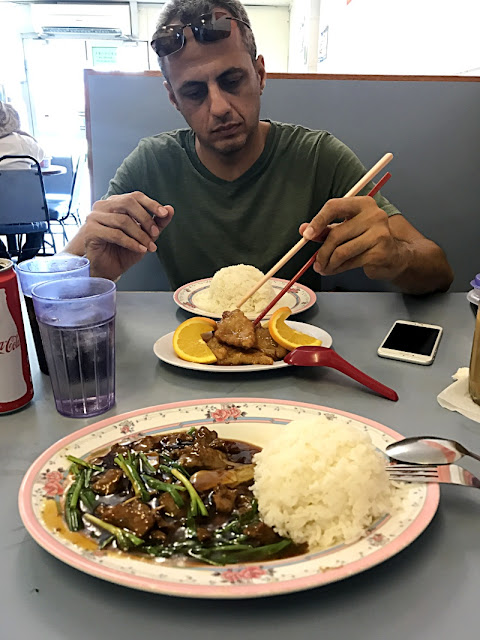 Well, orange pork chops for him, and beef with ginger and spring onion for me. Food was decent, but the coffee was gag-inducingly diluted! Sorry, but I didn't take note of the shop's name! It was a few shops after a Chinese eatery that sells pastries.

By 3pm, we were already back at the bus terminal. Only 3 people were waiting to board the same bus. Our ride pulled into the bus terminal at 3:15pm, with only a handful of seats occupied. The bus attendant took our passports, and processed our payments. Off we go!

It was a pretty drive, with lush rainforest flanking the roads. From KB, it took 30-40 minutes to the Brunei immigration checkpoint.

You could tell when you're in Malaysian land, the difference is stark. The greenery is now replaced by palm oil plantations... concrete buildings got denser, and the river is just...... inky.


Hello Sarawak! We arrived Miri at 5:20pm (got hold up at the Malaysian immigration because of one passenger - we were told the bus usually arrives at 5pm).

As soon as our bus pulled into the bus terminal, a horde of people started clamouring at the bus entrance. I remember idly commenting to Vinnie that this must be the next group of passengers heading back to Brunei.

Well, I was wrong. Those were the taxi drivers! They charge a flat rate of MYR20 to the city centre, for a 7-8 minutes drive. Ridiculously expensive, but there are no Uber service available yet here.

We were booked into Imperial Hotel (because I read somewhere online that it's right next to the Imperial Mall, the biggest mall in Miri). Decent selection of shops, a little better than Brunei's best mall, but only took us a few hours to get our shopping done.

A quick google brought us to Ming Cafe for a night of booze and pork ribs. Hehe, we're not big drinkers, but it is one novelty to cross the border and to redeem one's horns and forked tail.

The music is really loud here though, so expect to shout to be heard. Their food is yummy and value for money, too! 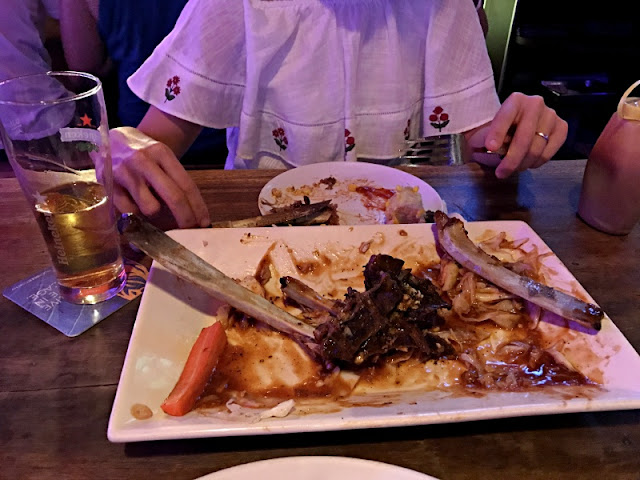 A friend from Miri, Jocelyn, recommended the 28 Food Centre for Sarawak laksa. This is just opposite our hotel. 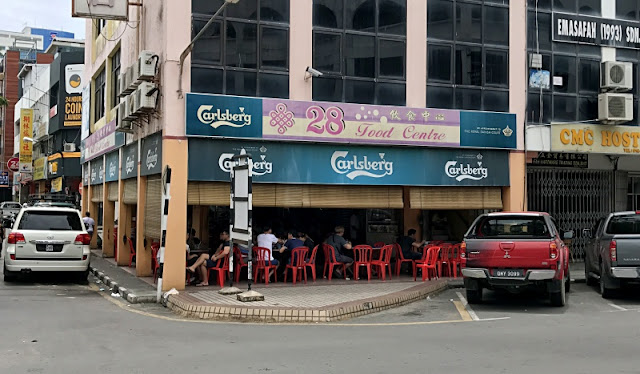 We were there at 10am, and already the shop was packed! There are three stalls operating in the kopitiam - Sarawak laksa, kolo mee and a chicken rice stall which hasn't started operating yet). We shared a table with a nice guy, turned out he's a medical doctor from Kuching. He told us that good Sarawak laksa and kolo mee are ubiquitous in Kuching, but in Miri, this is the only one he frequents. After his comment, I only realized all good stalls proclaim to be from Kuching, much like this Sarawak Laksa. 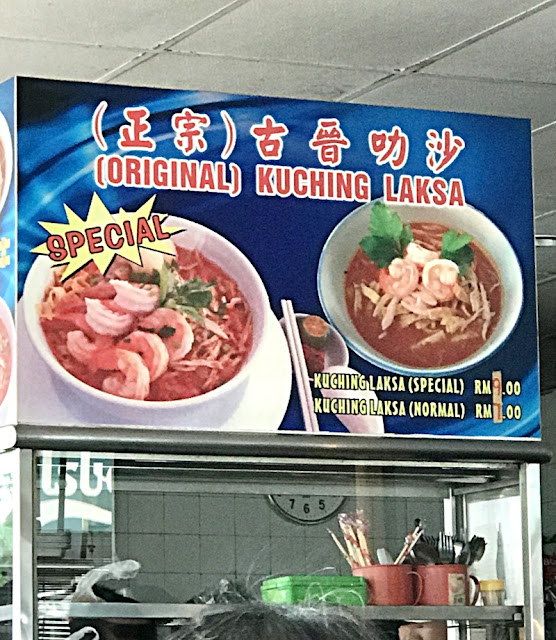 We both opted for the regular Sarawak Laksa. The special bowl boasts a few extra prawns and fish balls. Since both of us are not wild about fish balls, regular it is. 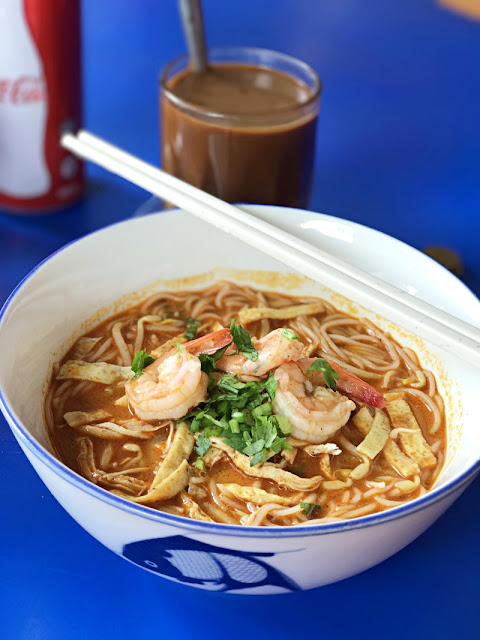 A squeeze of lime and some sambal were added to the broth. The prawns were seductively displayed, de-veined and de-shelled. I prodded my chopsticks on them and could tell they were cooked perfectly. None of that tough, overcooked, rubbery texture. A bite of the noodles, these were al dente and chewy.

Oh my. I was mindblown.

It is a rich, flavourful broth of chicken and prawn, with coconut milk. Every slurp sweeps me into contentment. It is THAT good.

Oh, and the coffee at this kopitiam is also pretty decent. 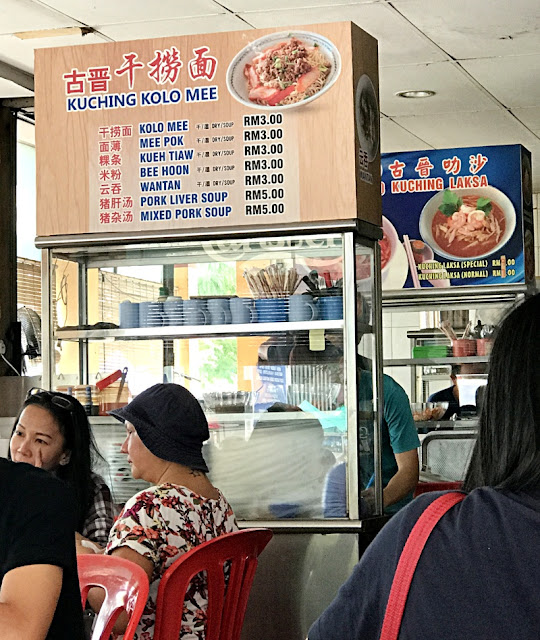 We came back again for lunch. I debated briefly if I should go for the laksa again, before deciding on the kolo mee. 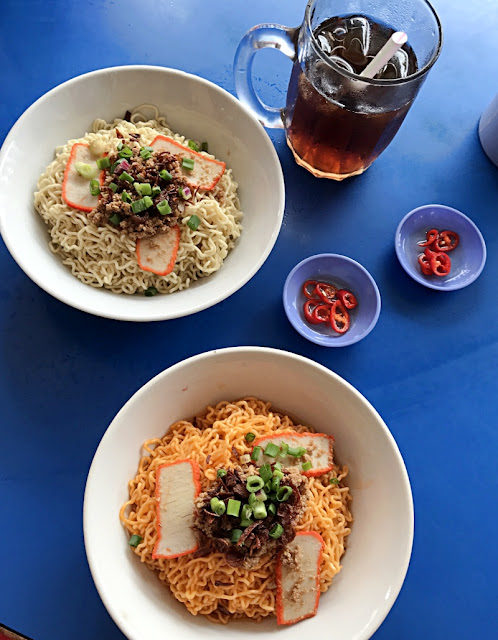 I should just have the Sarawak laksa! While the kolo mee isn't bad (nice springy noodles), the ratio of noodles to toppings were way off. The three charsiew slices and some minced meat were all there is, drowned in a mountain of kolo noodles. The noodles are nice, and springy though.

We have turned into hard-to-please kolo mee snobs, I guess, as we have found ourselves a good kolo mee rendezvous in Brunei (which I should blog at some point) and so, the lost chance of a Sarawak laksa meal is staggering.....

By the way, compare this photo and the one displayed on the stall. Massive difference!

For transfer to the bus station, we took one of the many taxis parked by Imperial Mall. There are two buses that depart from Miri for Brunei every day - at 8:15am and 3:45pm.

The taxi charged us the same flat rate of RM20 to the bus station. As soon as we arrived, a number of touts approached us, but they got disinterested and dispersed when we said we were heading for Kuala Belait, hehe. They did point us in the right direction, though. The Brunei-bound ticket counter is on the furthest end. Tickets are RM38 one way. 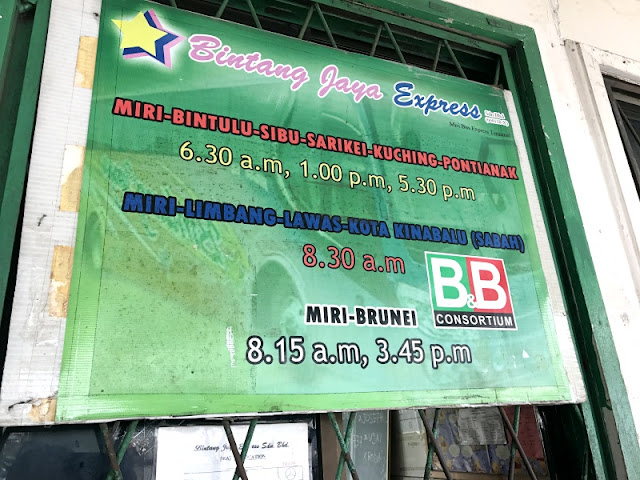 We got our tickets at 3:10pm and could board the bus immediately - the bus was already waiting in the station, so there was no need to wait in the heat ;) We departed on time (bus was 80% occupied on presumably the busiest slot of the week), but there was heavy traffic at the immigration, being a Sunday evening and all. It was almost 6pm by the time we were dropped off in Kuala Belait.

Now I need to go back and have that second bowl of Sarawak laksa.

Posted by Su Yin at March 19, 2017
Email ThisBlogThis!Share to TwitterShare to FacebookShare to Pinterest
Labels: Around the world - South East Asia, Food-Local Slurps