The best decision I've ever made since coming to Houston!!

At first when the guys planned to visit Six Flags, I was a bit apprehensive because I'm not fond of being dropped vertically and didn't like the feeling of swooping from high elevation, feels like I've left my stomach up there somewhere.

Even when I was in Disneyland, where the rides are much tamer, I was very nervous. So imagine what it felt like when we reached (after close to 3 hours drive) and see this from across the almost empty parking lot (before 10am, we departed at 6am in the morning!). 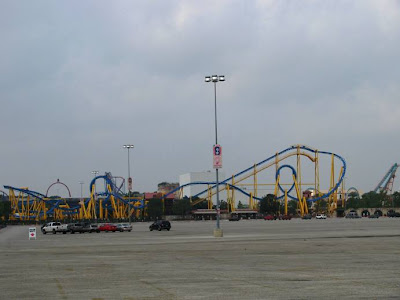 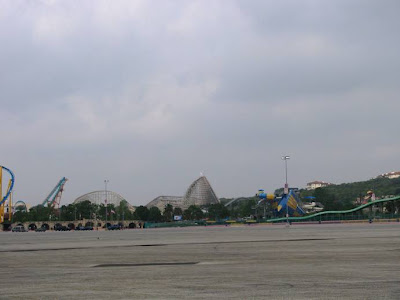 Wanted to get the photos stitched but didn't know how to and didn't have the proper software to do so. lol. But you get the idea what the rides are like. Certainly not fairy tale nor baby rides. 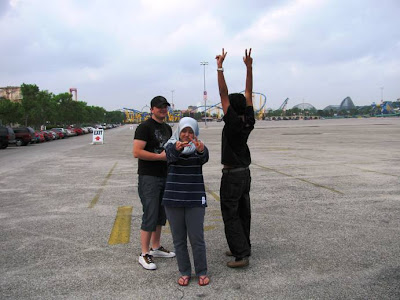 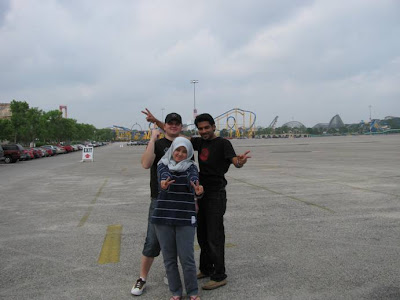 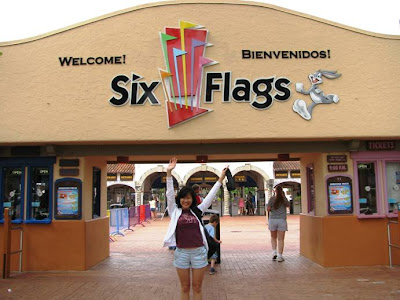 Weather forecast for the day is good, part cloudy but no rain forecasted. And throughout the day, it was just nicely warm, sometimes a bit too warm but in the afternoon, it became a bit cloudy which was perfect, when we tried out the water rides in our bathing suits.

I didn't take any pictures at all throughout the day as I had the camera securely stowed in the locker. Obviously I wouldn't want my camera to slip out during any of the inverted rides.

Since it was still pretty early in the morning, I wasn't feeling brave at all. The most adventurous ride that I allow myself to sit on was Bugs Bunny Water Fall or something like that. It was more like sitting on this canoe-ish ride and the highest drop was about 2 storeys high. Then I dragged the others to the kiddie rides like this aeroplane ride called Romp Bomp A Stomp, low speed and at most also drop 2 feet? lolz. The others who were more adrenaline junkies were rolling their eyes lol. Then Lukasz even feign sleep when the camera was taking pictures of us muahahahhah.

After 3-4 kiddie rides, they finally dragged me to this ride called Poltergeist. It looks quite small with tight twists and turns. Although I was hesitant, the others just went on ahead for the queue lol, so, I had to follow suit. You have no idea how nervous I felt waiting in the line... The wait was very short until I find myself on the ride much too soon.

Before anyone was ready for it, we were suddenly accelerated forwards at an incredible speed! Then everything else was a blur, turns, drops. Worst part was I wasn't ready even at the very beginning, I was looking down at my shoes and when all I was jerked forward and twisted and turned around, I could barely lift my head up because of all the centripetal force, dammit! hahhahahha But it was really good fun. When the ride ended, all of us were laughing and shouting. The other 3 checked on me to see if I am still breathing :p 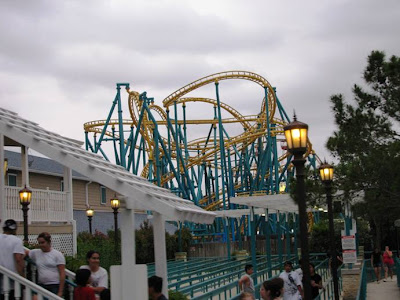 After that ride, the others were history..... The rides are really really fun. Unlike Disneyland, where all the rides are more amusing than thrilling. Six Flags kinda puts more effort on the rides and makes them really extreme whereas Disneyland concentrates more on the experience itself, the environment, ambience etc. I love Disneyland, but I love the Six Flags ride thrills :p

But there were rides that all of us disliked! Lol... the type that looks harmless and doesn't seem to be thrilling, but makes you dizzy as hell! There was this ride where countless swings are built on the outer part of this round construction. You sit on the swings and then this round thing starts turning and your swing kinds of turns round and round and round with it. Damn thing got us so dizzy that we only felt much better after lunchtime! lol. 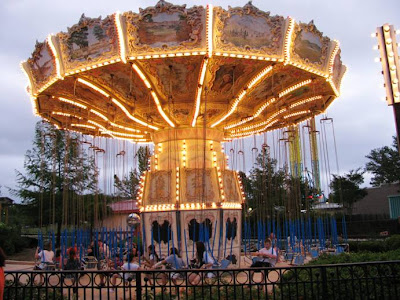 After lunch, we changed into our bathing suits and explored the water theme park. We went on the large circular river thingy where you kinda park your butt on the large floating rings and let the current sort of bring you around. Well, it was not a relaxing period for us as Lukasz and Shangar tried their very best to topple and capsize Shifa and I. That was where I got the bruise on my right knee! I tried to topple Lukasz but he was too fat and I only manage to push him forward than to do any damage on him.

I gotta say that some of my favourite rides were Superman : 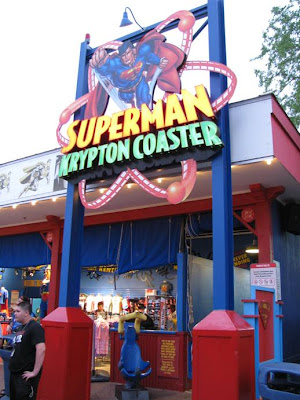 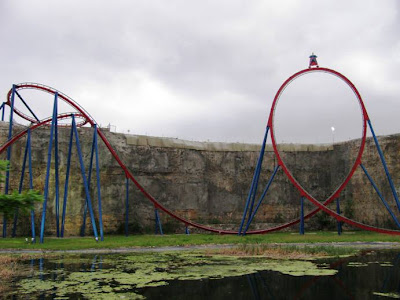 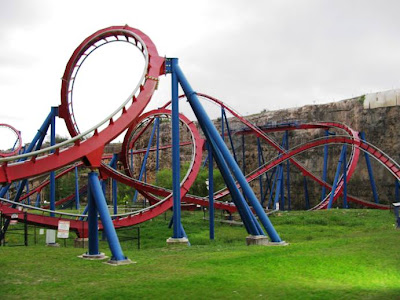 It was the first ride the others zipped to right after our water rides. Dang it! This time, the wait was much more horrible than the one at Poltergeist. This ride is bigger and looks more intimidating and is rated Maximum thrill by Six Flags. Needless to say I survived and am becoming more of an adrenaline junkie! The wait is horrible but once on the ride itself, it's really a great feeling :)

oh oh oh.... also that period when the ride kind of slowly drags you upwards and as you look down you realise you are more than 15 storeys high before plummeting high speed towards the grounds.... is just so..... mind-boggling...

Then there was Rattler: 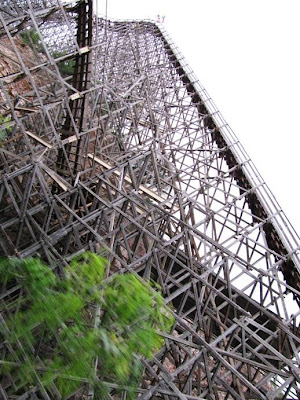 The bumpiest ride ever. This darn thing is called the rattler because the coaster rattles and shakes so badly against the tracks that when you scream, you kinda go - aaa-aaa-aaa-aaa! One of the funniest moment was after a particularly bumpy turn, I found Shifa's left leg kinda tangled with my right. lol. 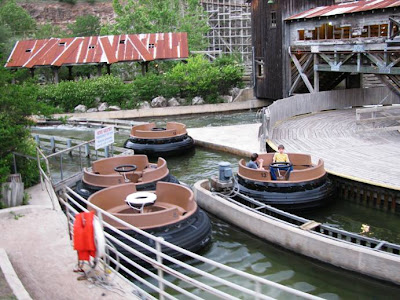 White water rapids... the ride we went on twice and got us all wet lol! 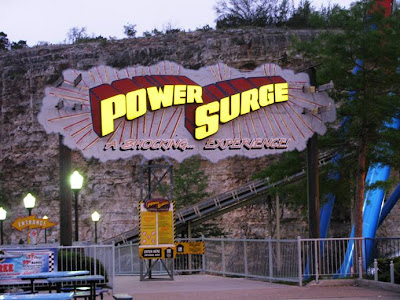 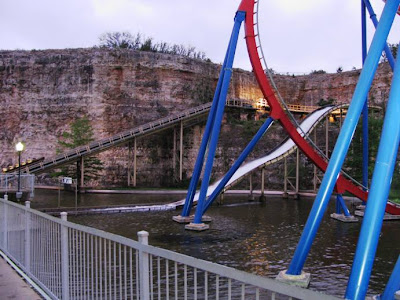 The Power Surge... the ride that got us fooled! Got splashed wet without warning....

The last ride that we got on was the Boomerang. I was darn tired and more than anything I just want to stop with the fast-paced ride and just sit back and laugh about the day. Of course.... I won't be released just like that as I was again tagging along with the others who wanted to try this one. I tried to explain to them that I didn't want to go on this ride, but Shangar tried to argue with me. Once he started that, I terus say ok, I'll go on it. Lol... Because it was close to getting dark and I badly wanted to at least get some pictures of some of the rides before dark and I felt like if I am going to argue this with Shangar then it's going to take some time, so I just decided to go on the ride and get it done with. 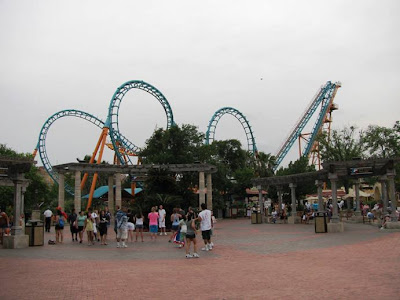 In my humble opinion, this is the worst ride ever. Not worst as in lousy, but worst as in SCARY. First we got on the ride then we were pulled up backwards very slowly.... so at one time we were like tilting forward at this angle looking down from almost 20 storey high. Then we were just released like that and there was I think 2 corkscrews or so until we stop on the way up. Then we were being pulled up again, slowly of course before being released and going through the same horrible turns again! 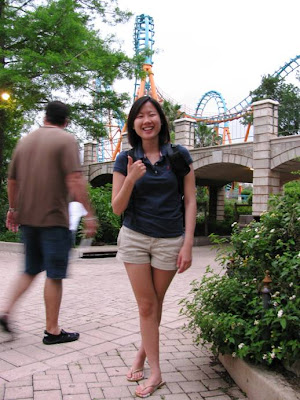 After a quick change, we got on the train ride to take some pictures and then played at the booths. 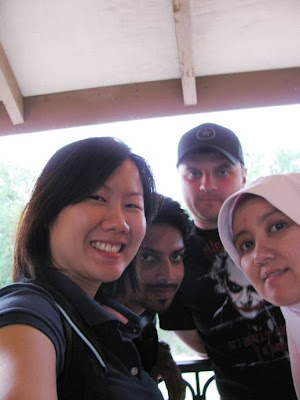 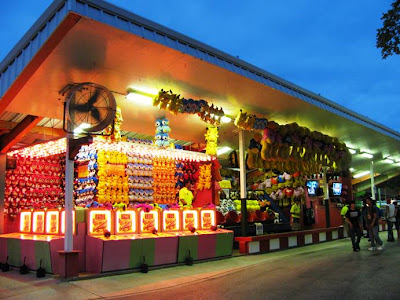 I got myself a graduation keychain at the giftshop :p
It says - I love Thrill Rides - Six Flags :D 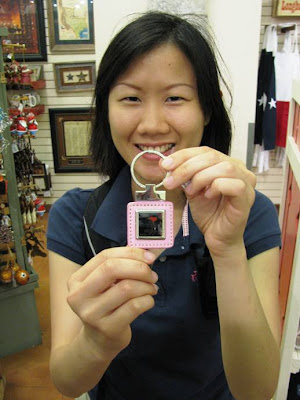 
We decided to have dinner at the Riverwalk. We were there once when the group organized a trip to San Antonio, but that time, we didn't get to enjoy the night view of it which is supposed to be really pretty. 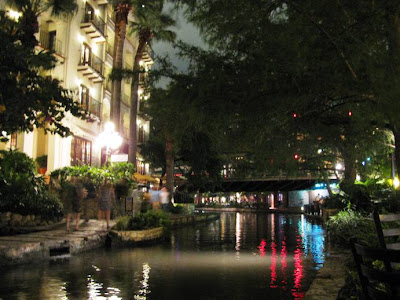 We went through a lot of trouble to get to this place! Climbing over fences, trespassing over construction sites...lol. But we were too hungry to care and didn't want to make a huge turn around when our path was block by a construction board. 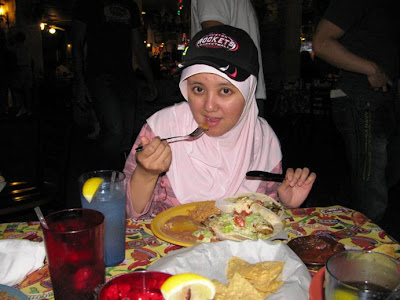 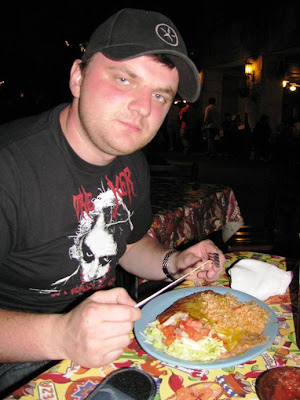 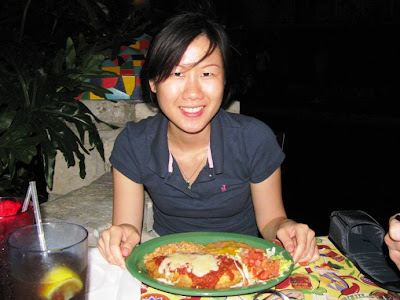 My dinner of Chile Rellenos. 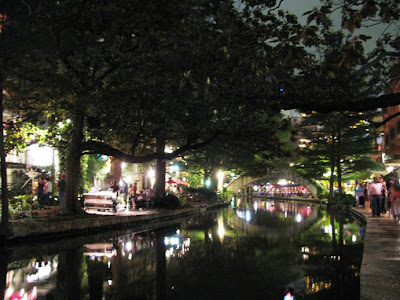 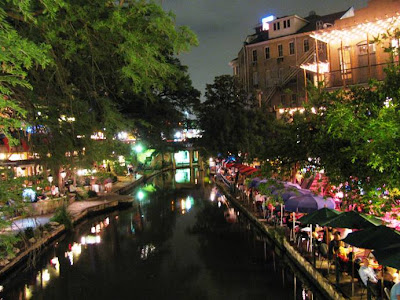 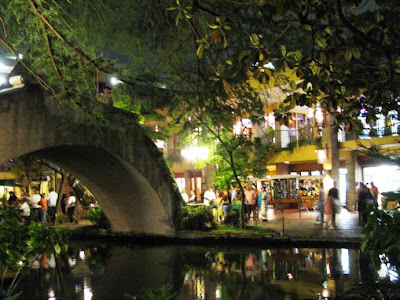 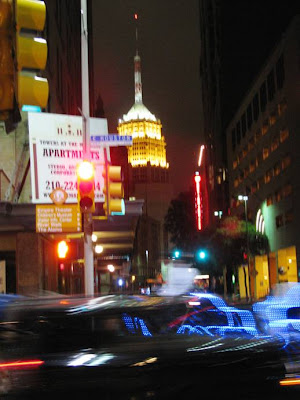 We ended up leaving San Antonio close to midnight. That means we only reached Houston/Westheimer at 2:30am... It was a good thing that we all get to kind of sleep late the next day... Shopping day! Spent $200 on stuff for myself... but that'll be irrelevant to blog about in this post :D