More driving ensued on our 3rd day settling into Namibia. We were both really tempted to spend a few more nights in the National Park, but alas, the lodges were fully booked and we were lucky enough as it is to secure one night at the last minute!

The drive from the park till up north was estimated to take 5-6 hours, so we set out bright and early. after a scrumptious buffet breakfast at the Etosha lodge (pork sausages, toasts, eggs and the elusive FRUITS!!). We expected to reach at 4pm or so.... Oh boy, were we horribly wrong! The roads started out nicely graveled and straight, we could do the maximum legal speed, 120km/h. Then 3 hours in, the condition of the road deteriorated. There were road works in progress and we had to cut down our speed to 60km/h. It gets worse, the roads got narrower with loose stones and really bumpy, we were doing 20km/h at some points! 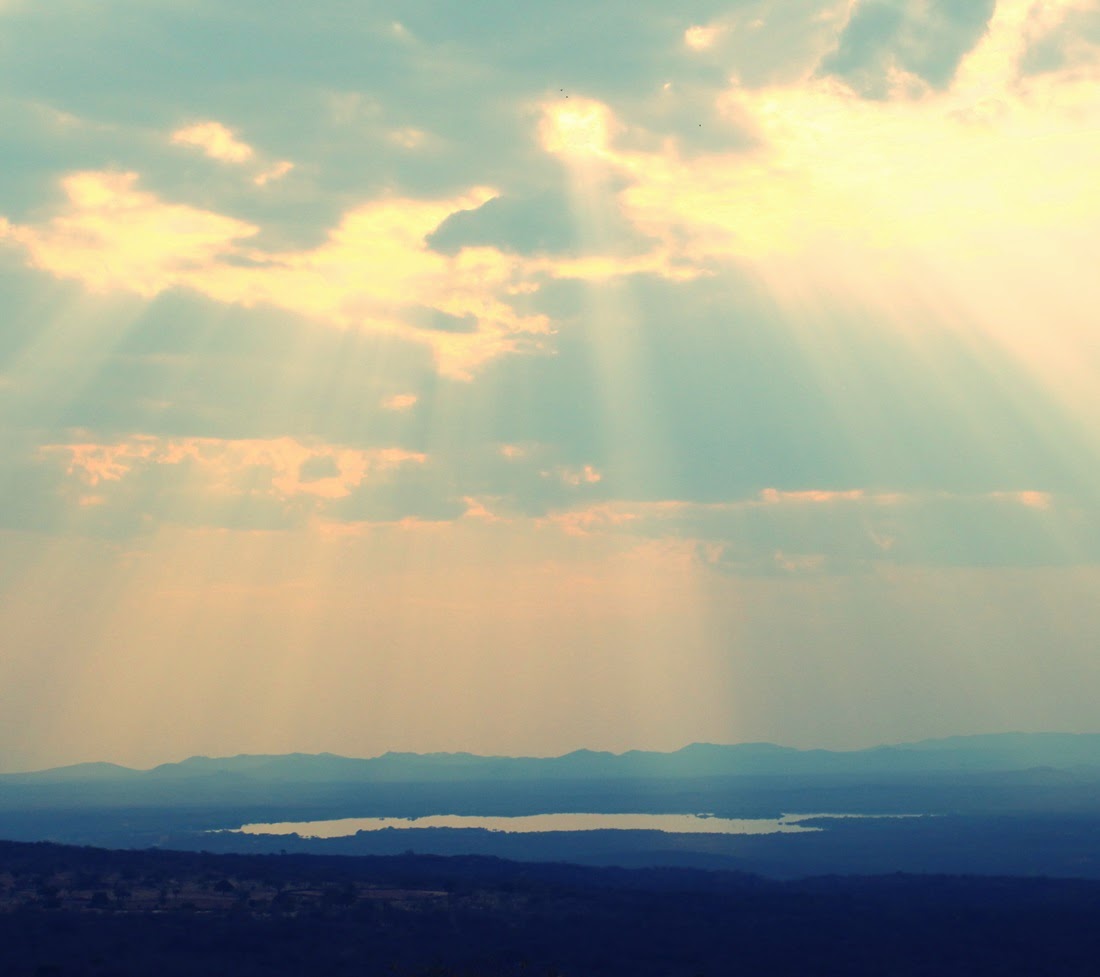 The Kunene River viewed a distant away (3 hours' drive away, to be exact).

We arrived just as it was about to get dark, with no sign of other vehicles along the way. It would have been a right mess if the car were to break down during that journey! Still, it was well worth it. Kunene River is one of my favourite places during our holiday. 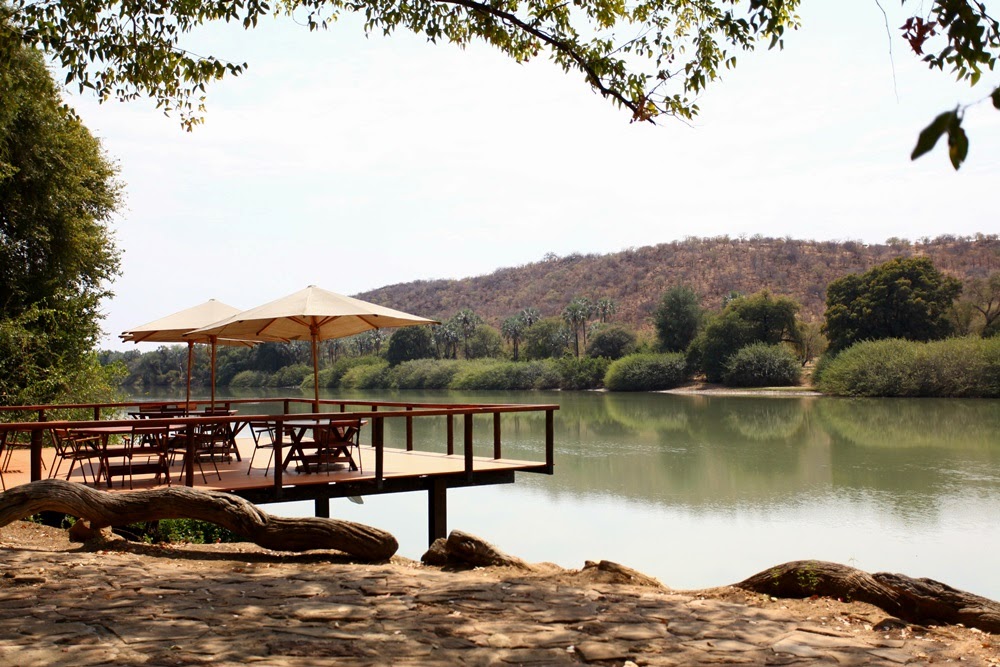 The restaurant that overlooks the crocodile-infested river.


We spent 2 nights at the Kunene River Lodge. There are plenty of activities available for guests - bird watching, hiking up to a scenic waterfall, sunset cruise and of course, a visit to a local Himba tribe family. 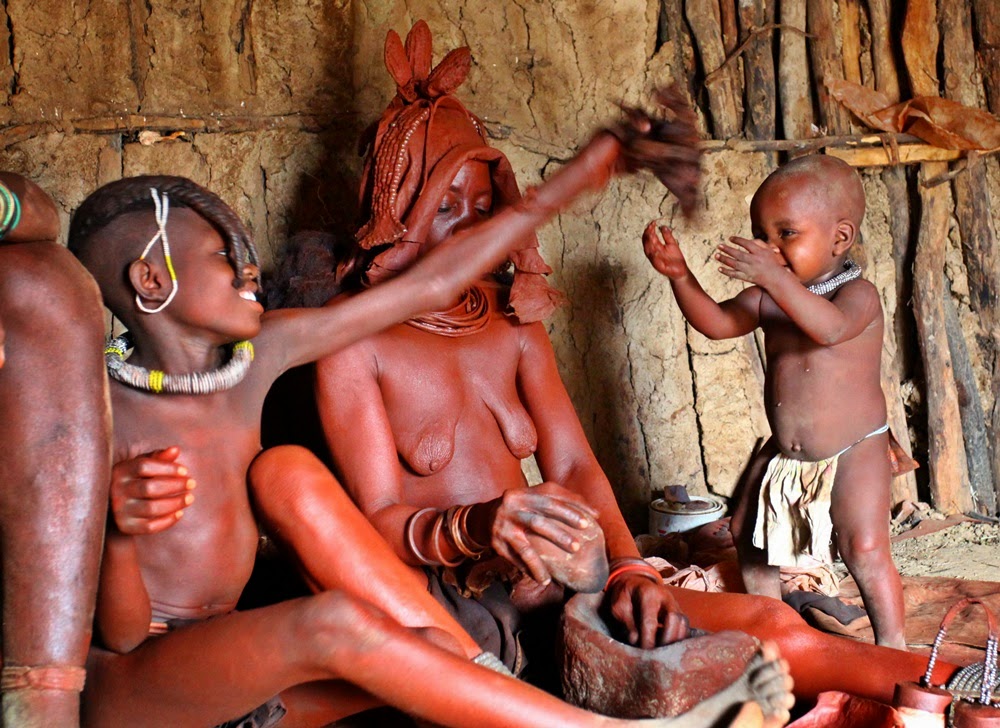 It was pleasant enough on the local tour, it didn't feel too touristy. We were a small group (us two and another couple). We were shown their ways of living, ducked into their little clay hut and felt the texture of the grounded orange-brown sandstone (which is blended into a paste and applied to the skin) between our fingers. 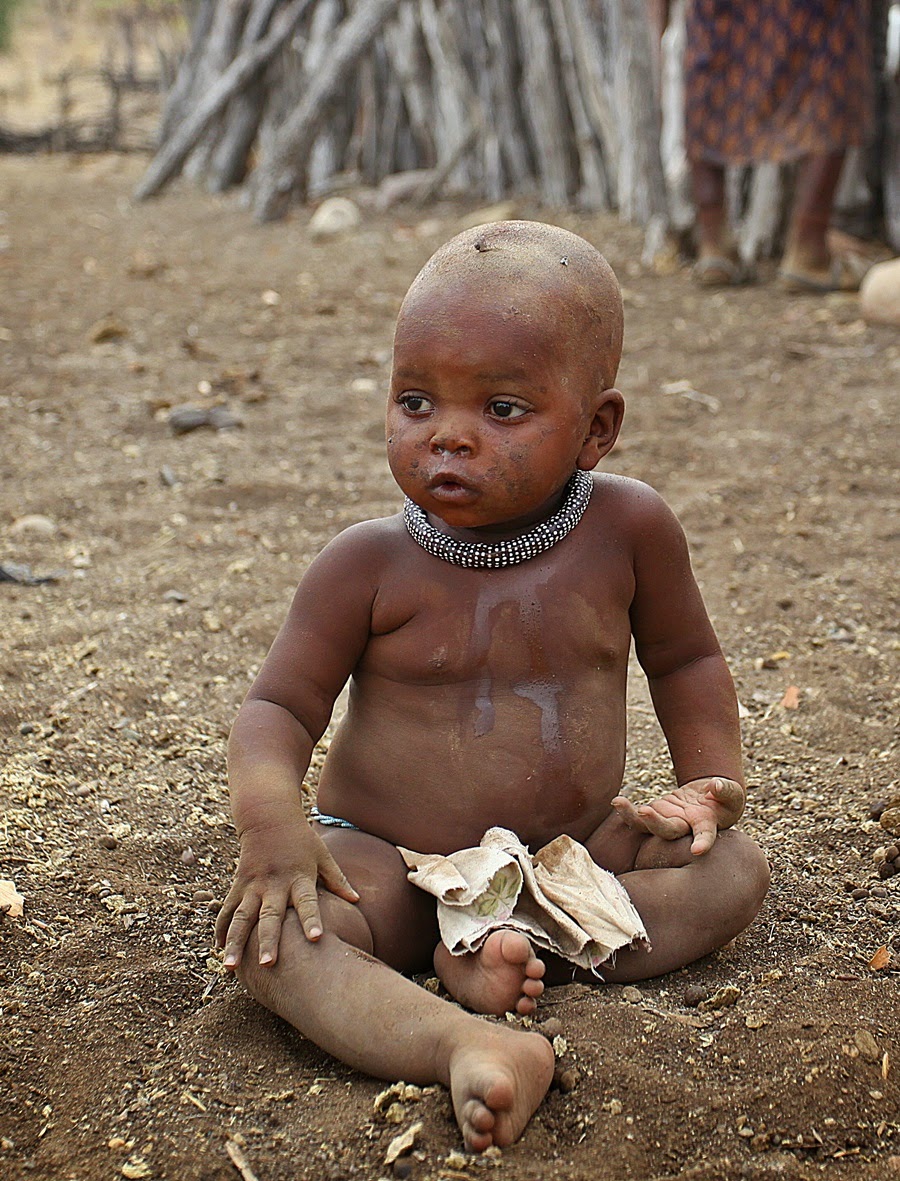 Their baby boy (who can be seen here slobbered in his own mucus) is sick, and as it is not a norm to get a doctor, the parents have a holy fire lighted up instead. 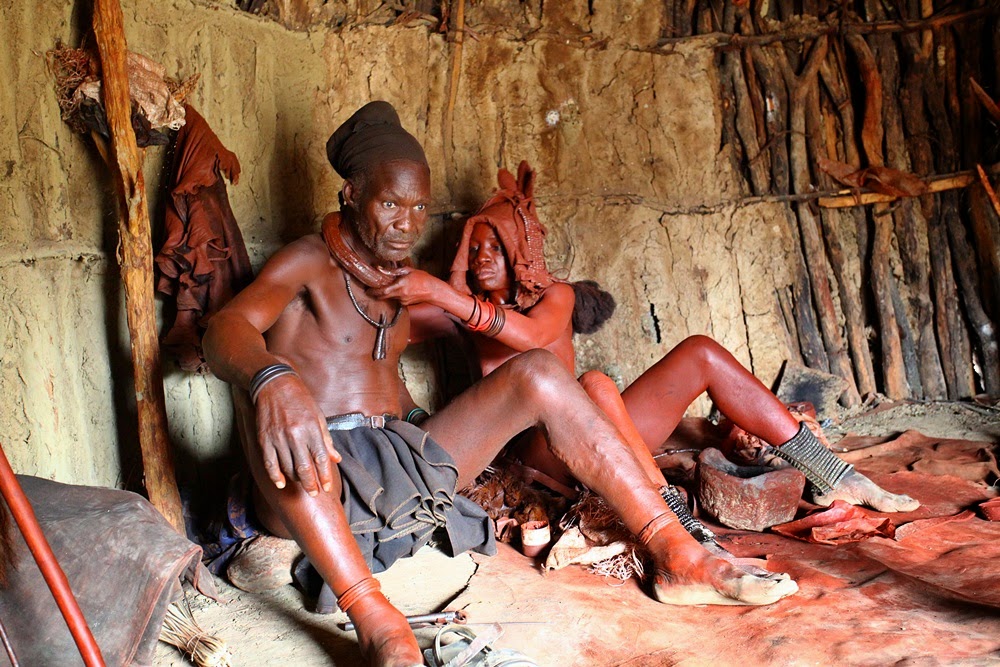 The man of the family after smoking a joint - hehe. 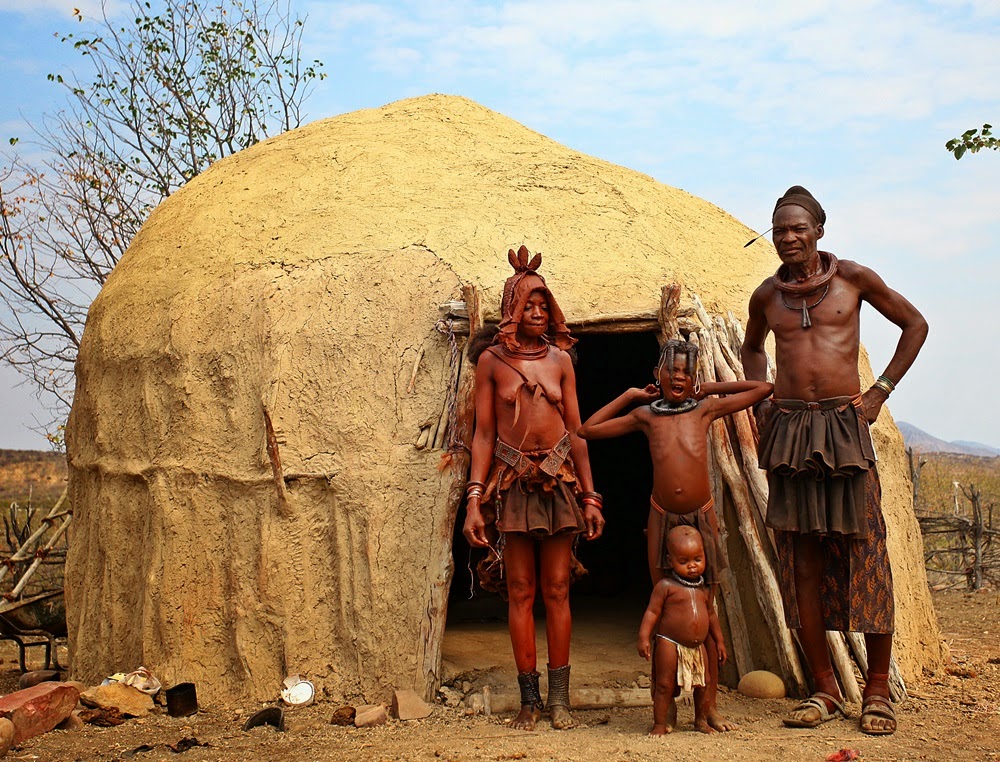 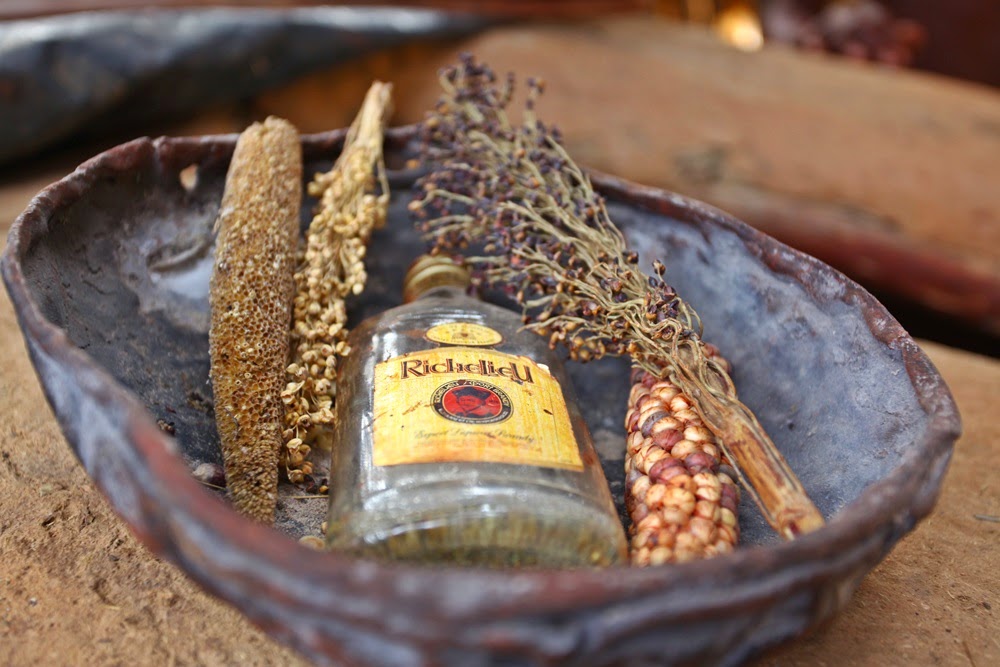 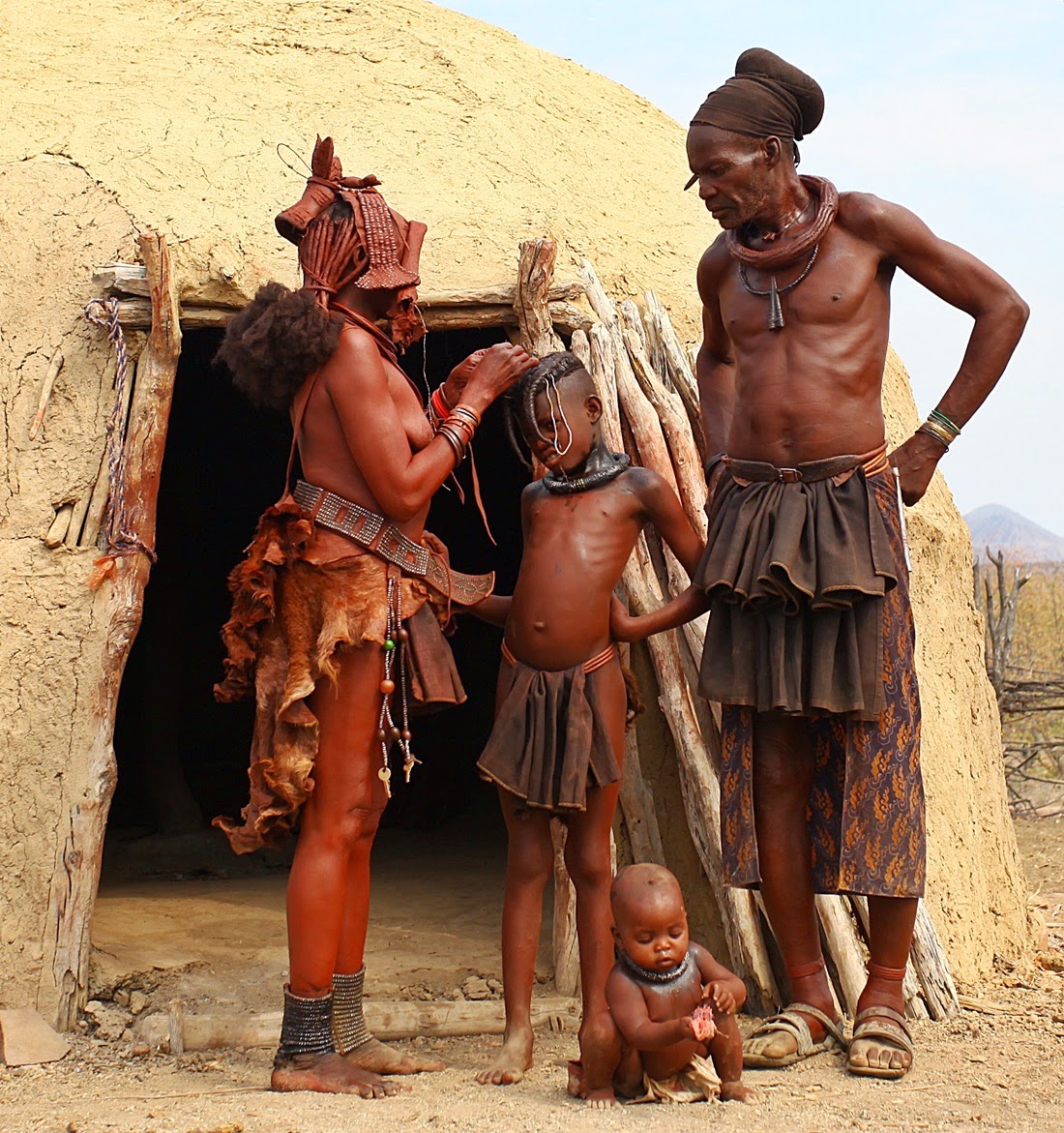 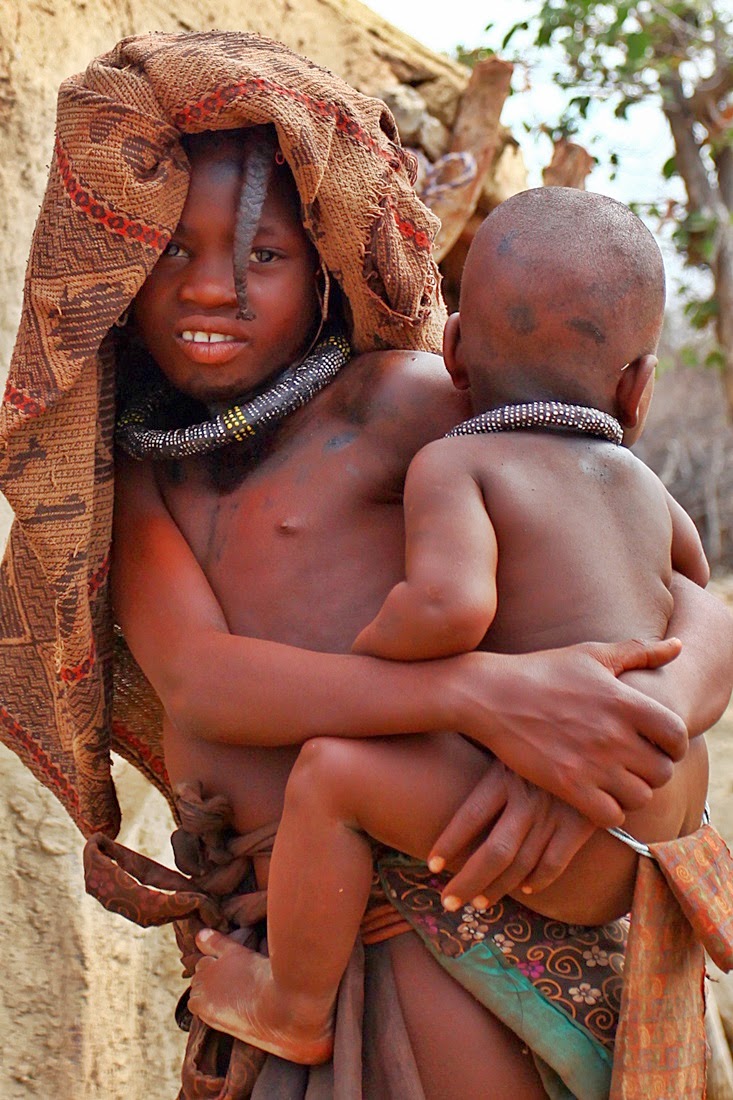 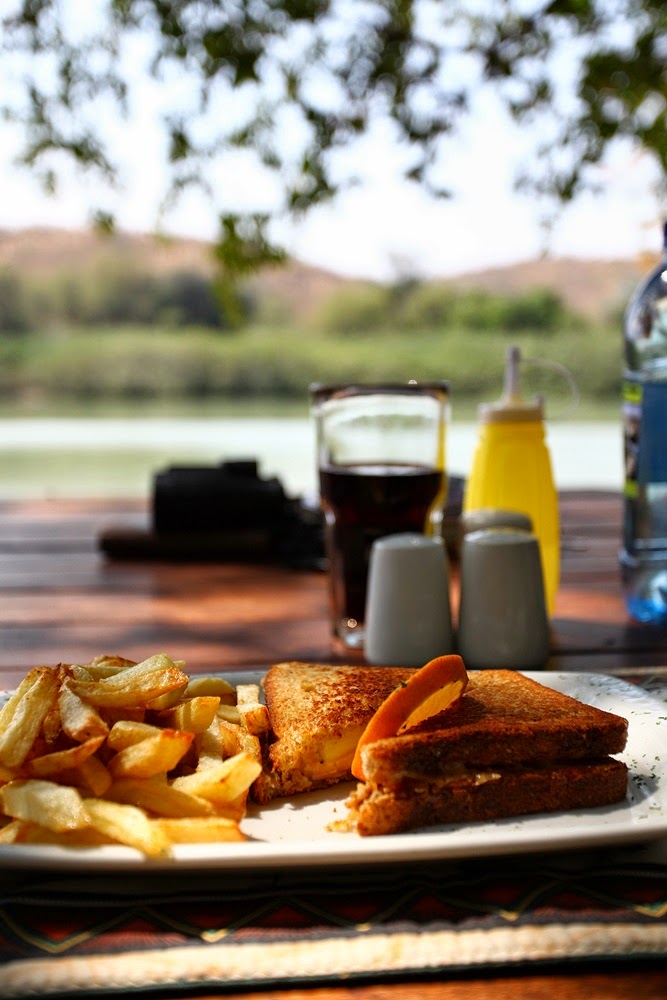 After an informative morning, we were starved. Only options for lunch were sandwiches....... These and steaks make up almost 99% of our meals in Namibia! 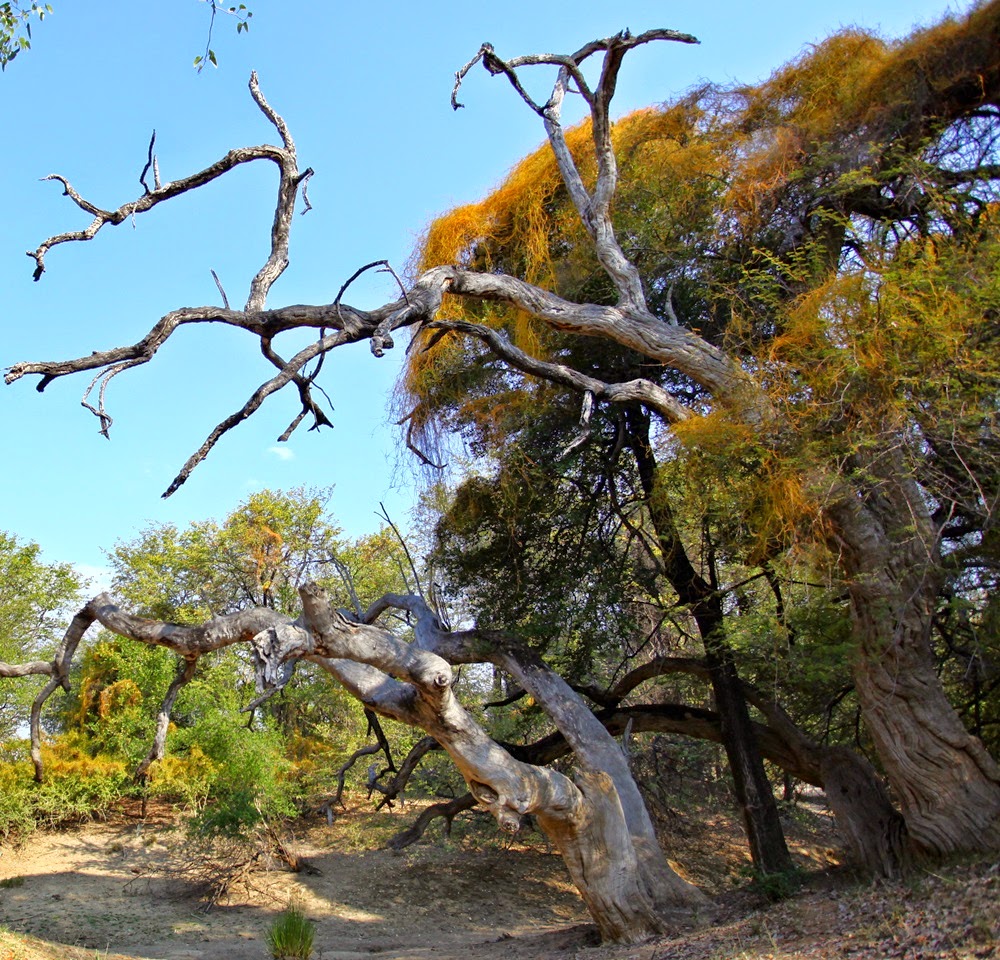 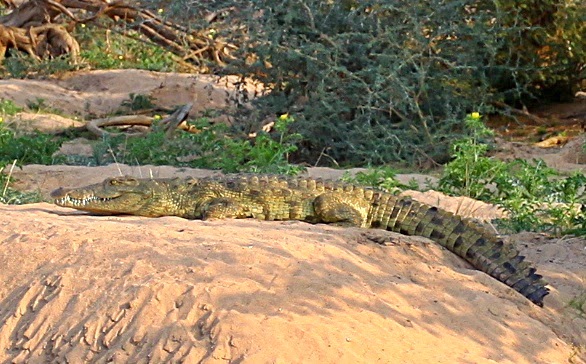 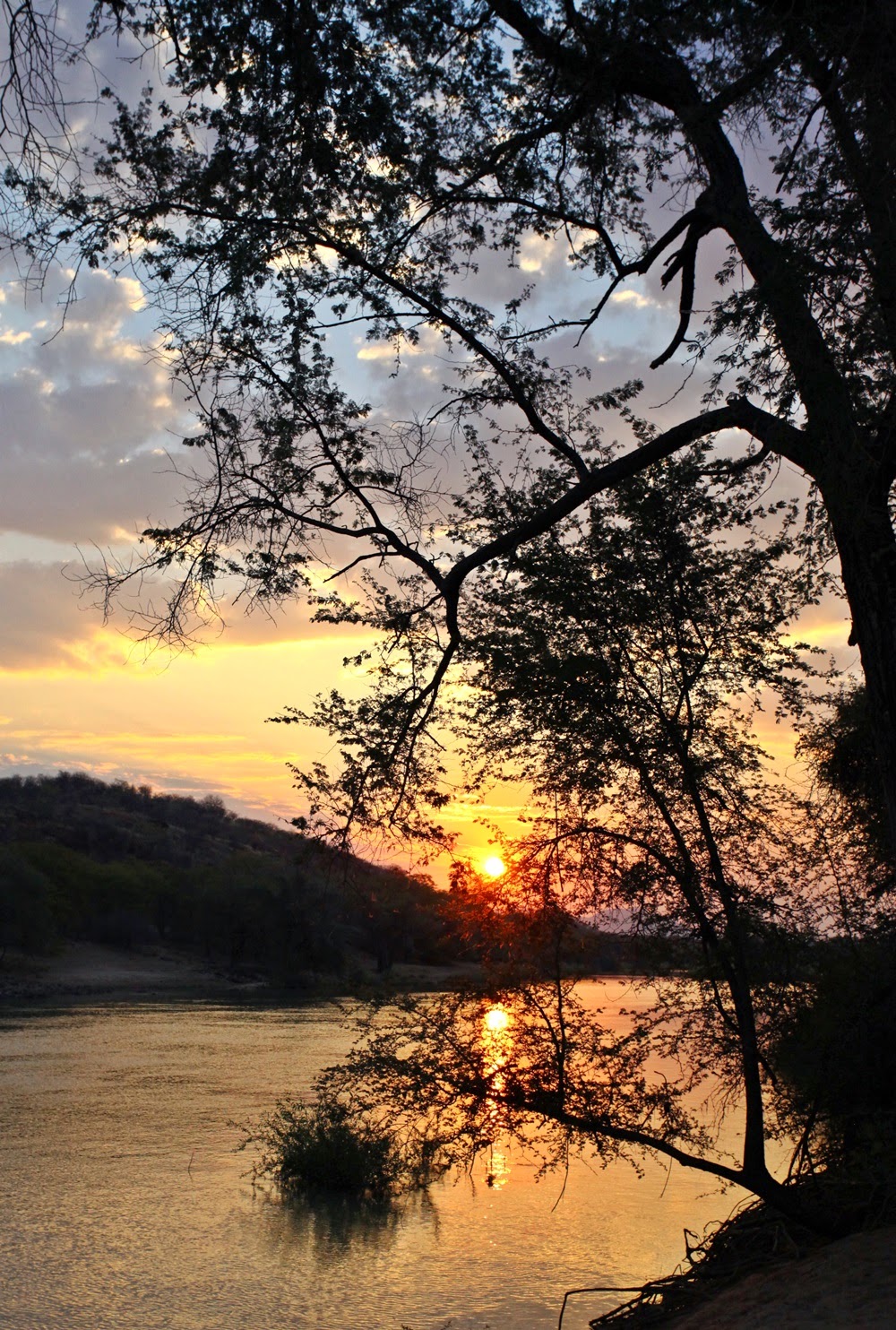 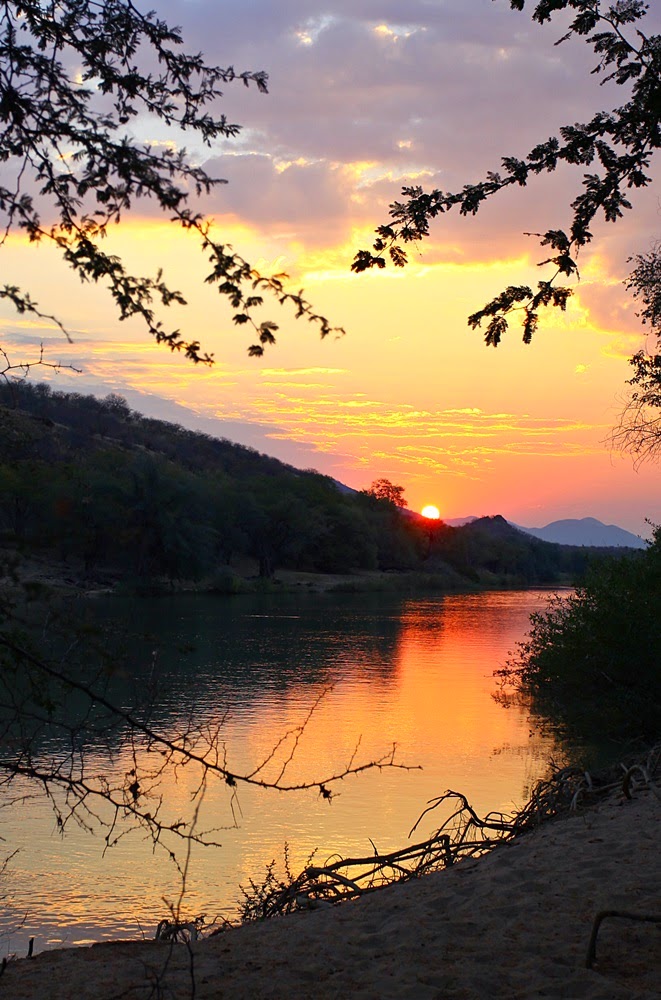 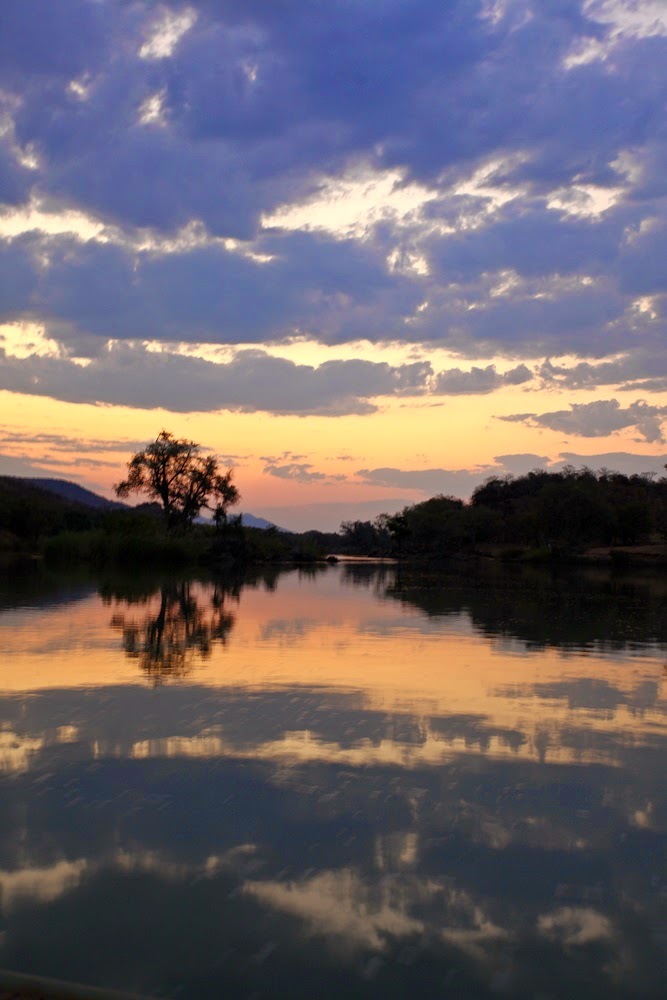 It's a shame we only spent 2 nights in Kunene. It's a long drive to get there and also plenty to do, very relaxing too, if I might add!

And thus, the driving resumes.

3 hours later, we made a pit stop in Opuwo town.

What a festive rendezvous! It is a hobnotch of a town - it seemed that people from all walks of life congregate here. There is the Himba tribe people (breasts exposed and all) strolling in town, the elaborately dressed women in heavily-textured and colourful dresses, complete with horn-like headdress, the more modern Namibian women in their short, black dresses with a stylish handbag. It just felt to me like a more liberal and relaxed town.

A most interesting place, to say the least. 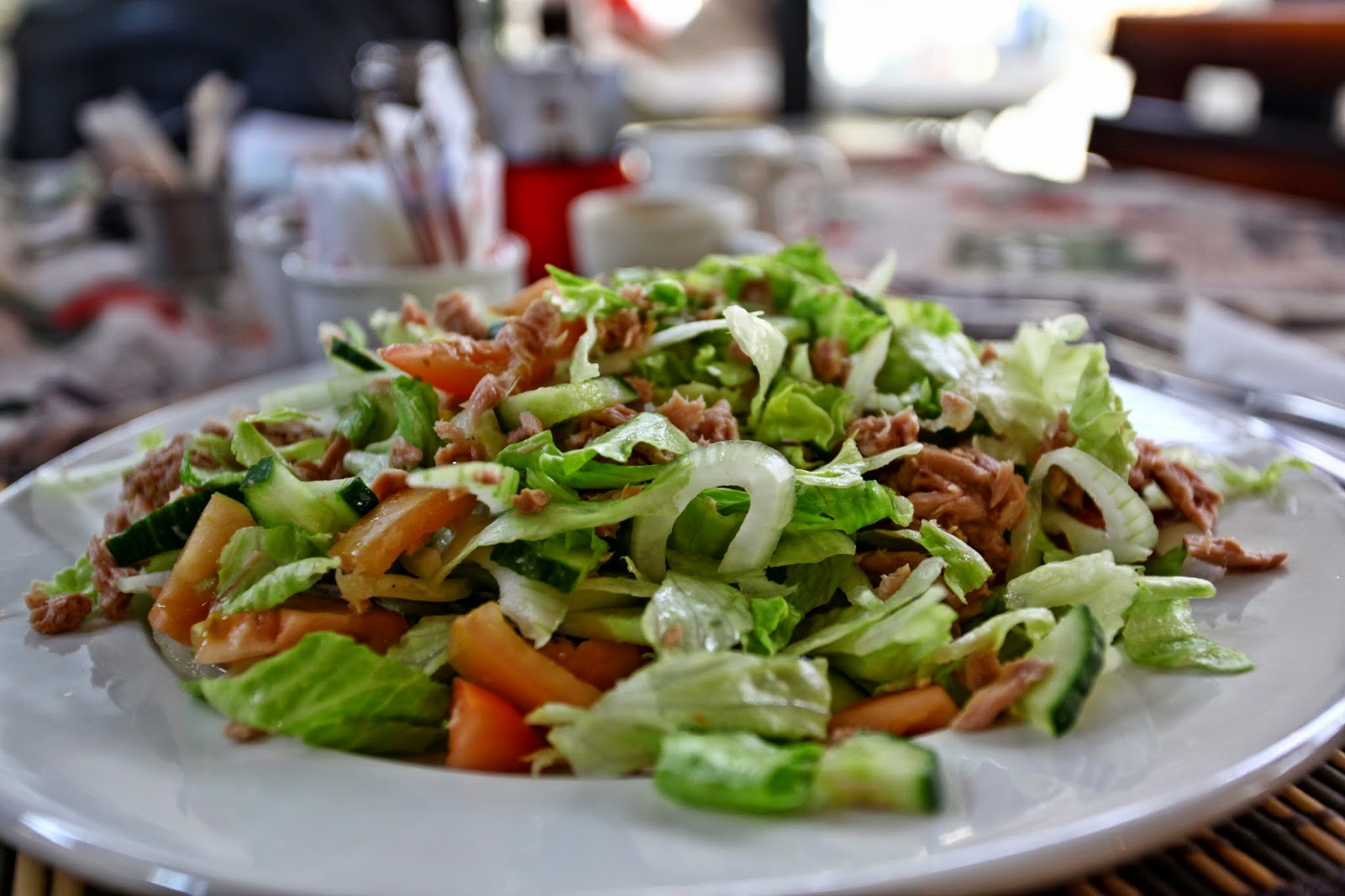 The nice lady, (Hilda I think her name) suggested for us to stop by at a nice restaurant in Opuwo which serves pizza. I was craving for anything non-carnivorous and ordered a plate of salad! The tuna was from a can but the crunch of the salad leaves

We continued on into Damaraland and V was driving when he suddenly exclaimed and cursed loudy. A white-banded snake with its head coiled up high! Whoa.

As we drove past, the scenes changed from vast desert into rolling hills and seriously trippy roads. We arrived Palmwag early - checked in and even managed to take some shots of the sun setting.

It was a chilly night- I was wrapped up like a bak zhang, woolly socks and all. I fell asleep with my bum pressing on my hands to warm them up and did not move an inch throughout the night because of the cold. Result? Hands were numb with pins and needles when I got up, and my back was aching from the awkward angle I was sleeping!

But that wasn't the most interesting event of the night. I was rudely awaken at 11pm (fell asleep at 9.... Yep....) by a loud rustling, and hard thumping on the gravel from behind the wall at the headboard. I lay there, frozen like a log, not knowing what to do and kinda freaking out as well.

The tearing of roots can be heard and more shuffling of heavy footing. I tapped Vinnie and woke him up. He went out to investigate, with me following closely behind.  It was an elephant! 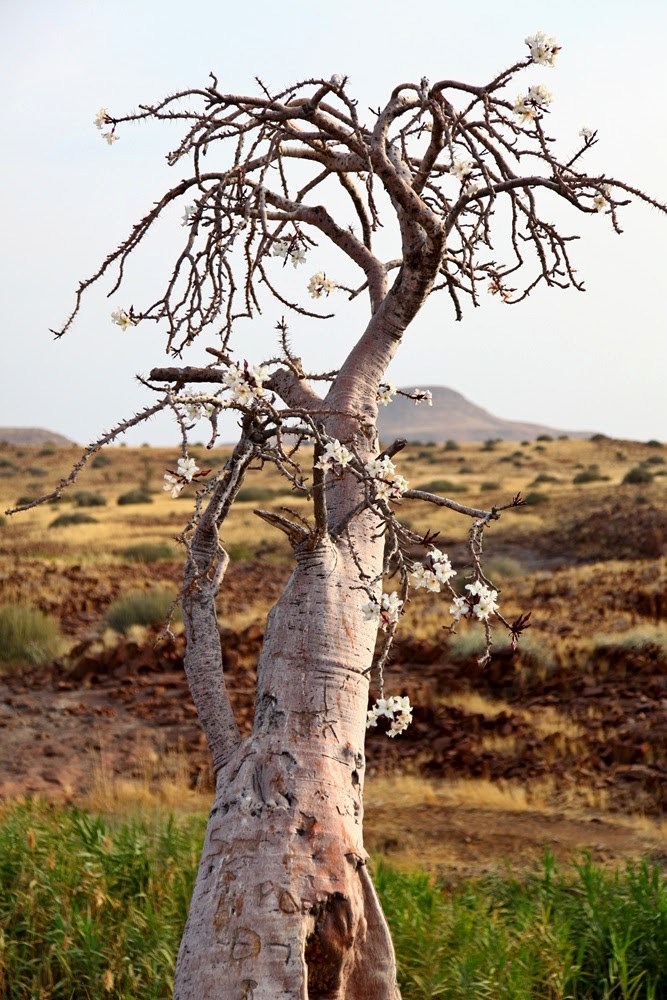 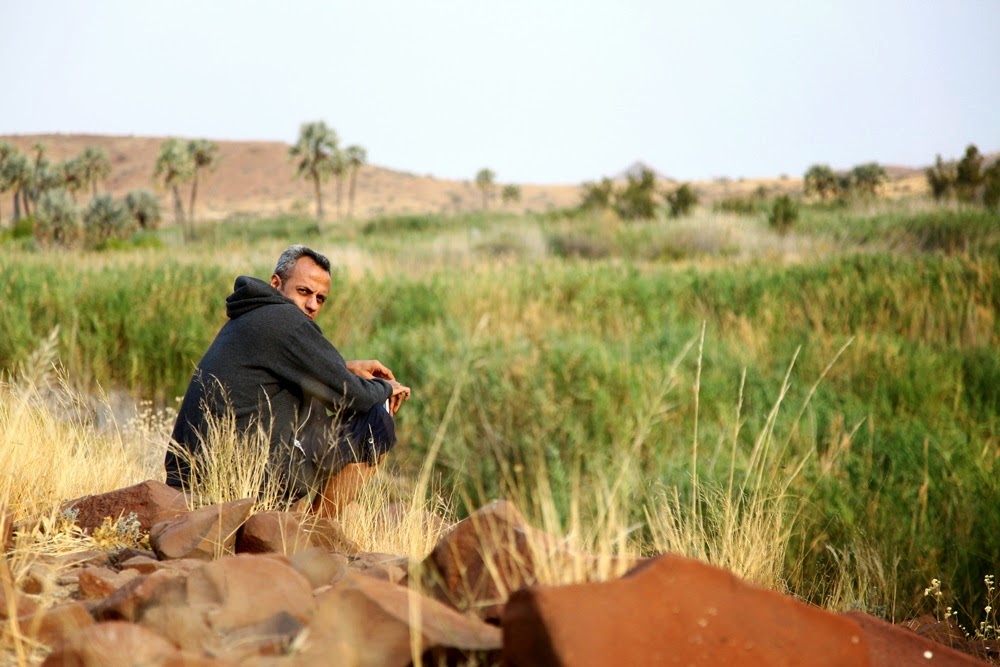 I stood there, gawking for the entire 30-40 minutes of it. Watching as the elephant took a few long strides and covered the distant to the next lodge (it was empty) and started terrorizing the bushes.

The next morning, we were greeted with a rude surprise. As we checked out, the receptionist requested for payment twice the amount we thought we were paying. It came up to over $200 for that lodge (didn't even have heater!). Flabbergasted, we asked why weren't we told of this and apparently the price she quoted yesterday was per pax! We weren't happy and the bored-looking female didn't make it easier. We've stayed at the Etosha lodges, and they were really nice, at only $80 a night. The lodge in Palmwag was below the Etosha in terms of comfort and amenities, so we were greatly disappointed by what we felt was a rip-off.

A cultural viewing on the way to the Brandberg Mountain. This lady was shaping ostrich eggs and making a bracelet out of them. 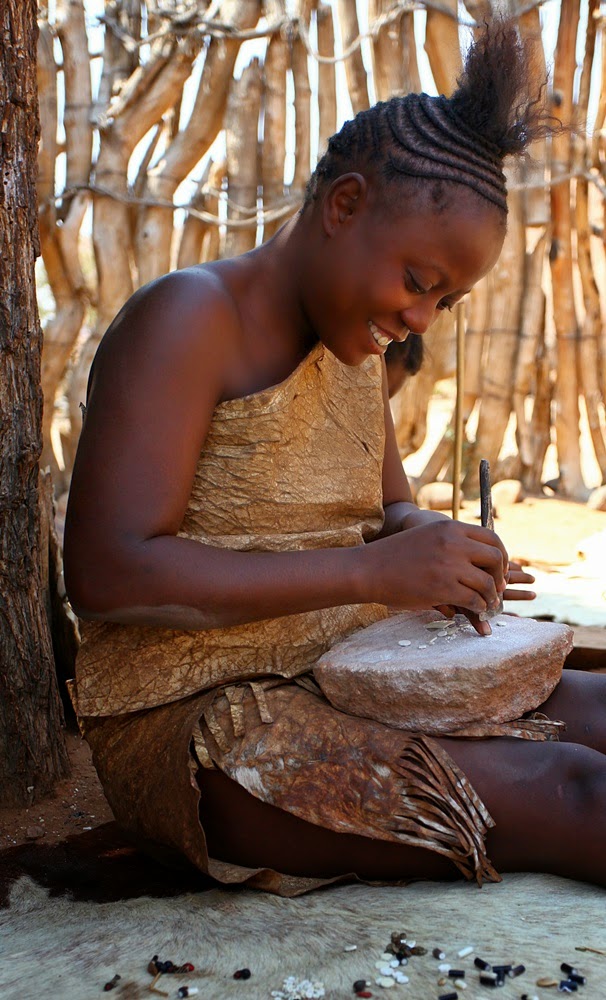 A short stop by the Twyfelfontein to check out some ancient graffiti on rocks. 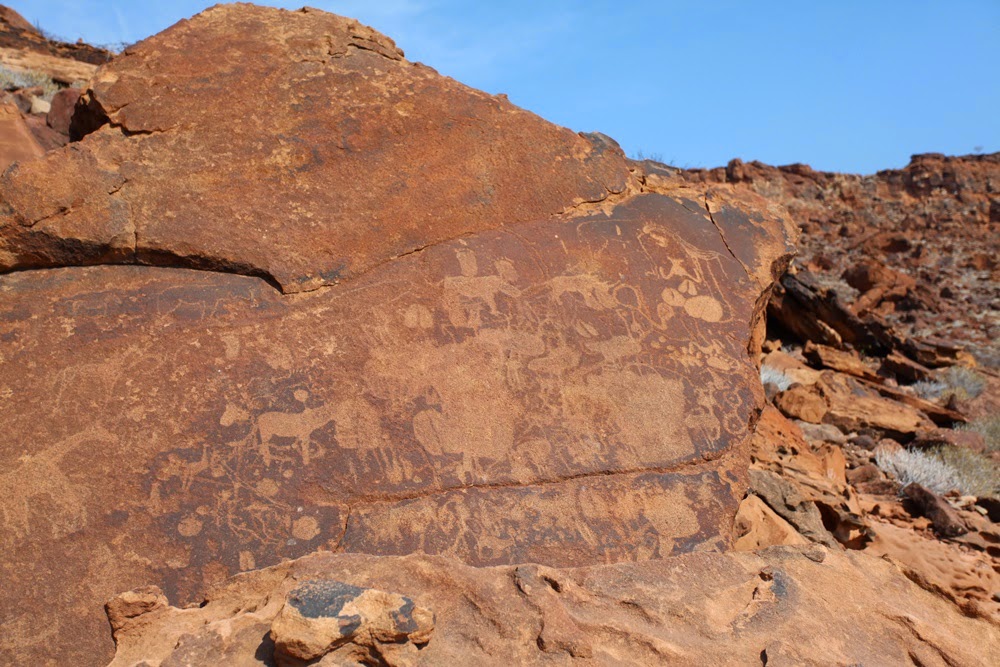 See if you can make out the giraffes, crooked-tailed lion, zebras, rhinos and ostriches!


On the drive out to the Brandberge mountains, I inadvertently fell sick... Again. I don't know what's wrong with the weather, or if it could simple be the dust but this is about the second time I've gotten sick on this trip alone! I started sneezing and sniffling non-stop ... :(

Checked in, so-so place. Square building with uninspiring decor and basic facilities. They seemed to have invested a lot in this elaborately carved wooden front door (elephant with foliage in background) but inside, it is almost a B&B. 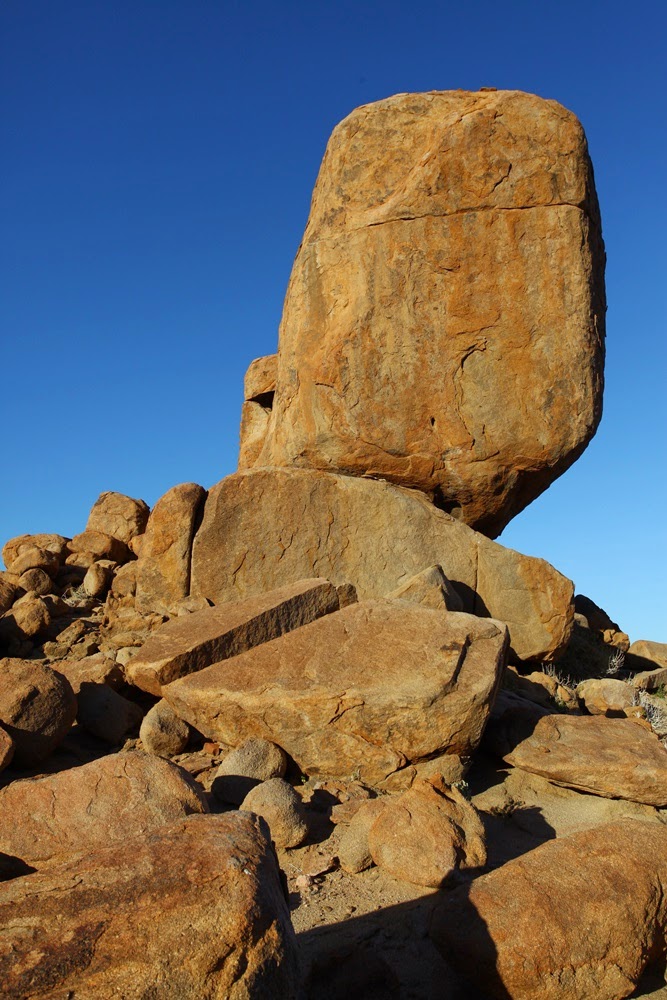 I was still feeling under the weather but didn't want to miss out on exploring the country. So we set out together on a walk, looking for birds. After a while I got tired and wanted to head back. Poor V. He suggested we go for a drive instead, and check out some game action (we've earlier seen some ostriches and wanted to see more). There isn't much game activity going on and I felt bad for V as he had really wanted to do Etosha but we had to scrap the plan off due to time constraints.

But whaddya know, just when we were checking out some birds and doing a leisurely drive, V spotted not one, but four cheetahs! I had to pick my jaws up afterwards but there are no words to describe how awesome it is to expect to see "regular" game only to be surpassed in expectations when the cheetahs were spotted!

One cheetah in particular (I'll call him Curious George) seemed particularly bewildered by our appearance. He trotted over but stopped a distance away and checked us out. V toyed with him a little, we reversed and George came bounding and stopped again when we halted. 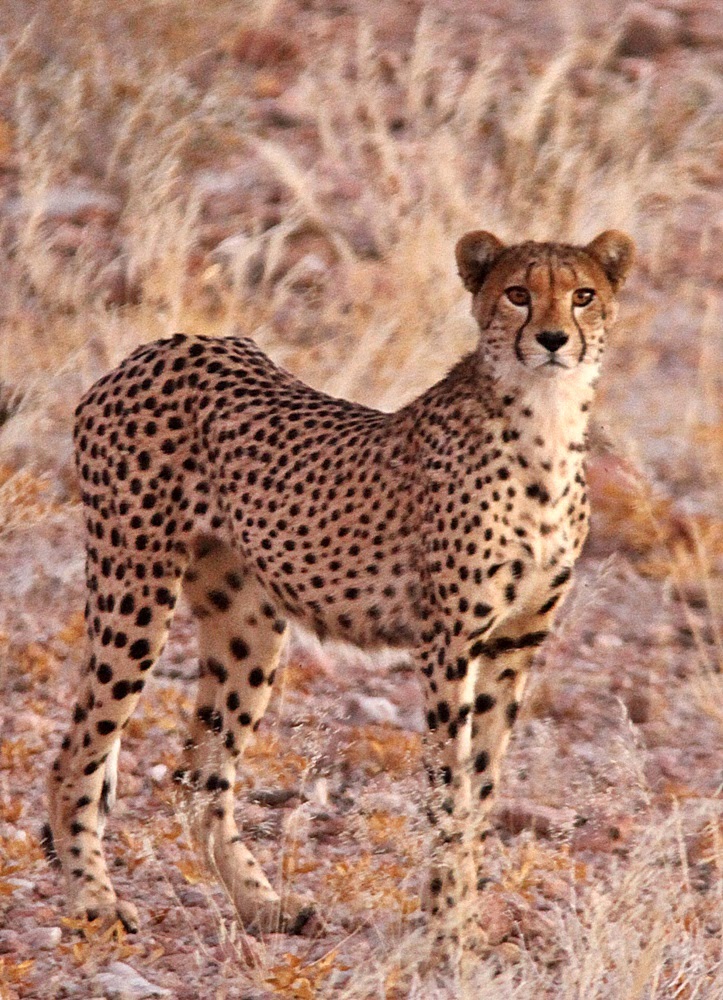 Curious George and his disapproving look at our lack edibility.

We continued doing this until George was less than 10 meters away!! He started circling us to satisfy his curiosity.... I suppose he is deciding if we/the car is edible. V  got some really good shots of him. I got a little scared over the intimacy but V assured me that cheetahs are completely tame. .... Er, m'kay....

Posted by Su Yin at October 12, 2014
Email ThisBlogThis!Share to TwitterShare to FacebookShare to Pinterest
Labels: Around the world - Africa