I am back! That was a long commercial break, got back from a holiday to Hanoi with the parents (phew!), a short getaway to the bustling city of Hong Kong... but that's a story for another day. Let's move on to the last instalment of my adventures in Namibia!

From the Brandberg mountains (after a night of food and enjoying the singing of the Brandberg people), we drove south towards the coast for another type of experience altogether. Where the desert meets the sea - the Skeleton Coast Park. The change of scenery is almost dramatic. One moment you're cruising past a savanna and the next, a desert with sand dunes..... Then bam! We see the coast. Whoaaaa. 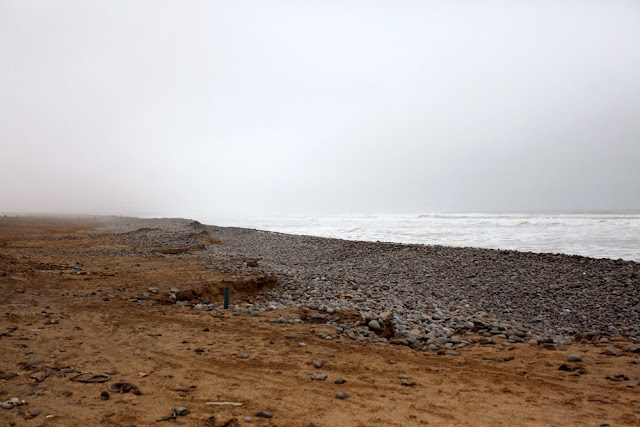 The sun is barely visible, frequently hiding behind thick clouds and mist. The coast is largely known for its hot and cold air currents. When met, they form a thick fog over barren rocks and treacherous jutting coasts. Ships were unable to navigate in the fog and ultimately, crashed and washed ashore. Some wrecks still remain along the coast, while others are almost completely destroyed.

It is a most desolate looking place: unhospitable conditions, desert as far as the eye can see, all gloom and doom - befitting of its morbid moniker. 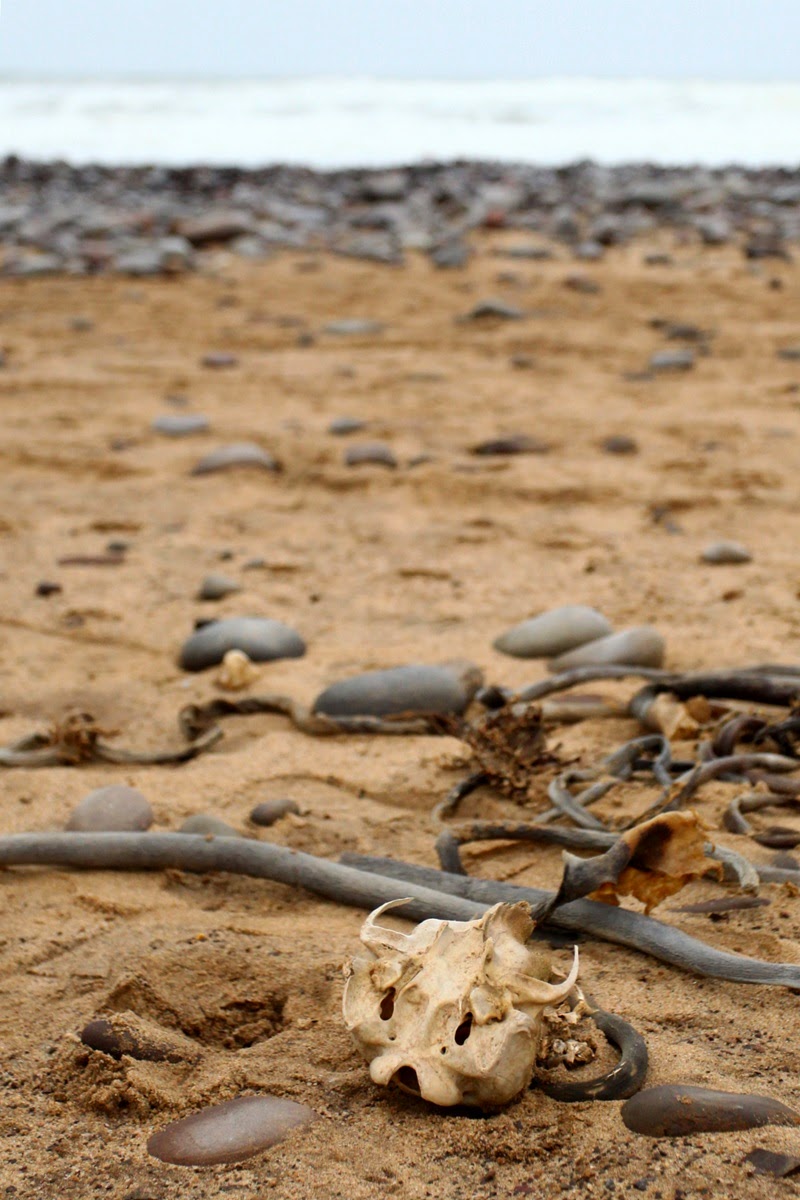 Nothing to see here, move along. 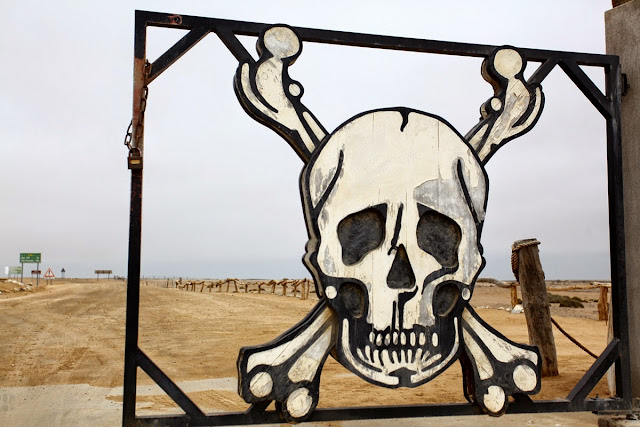 A brooding, mysterious sort of place - beautiful, in an eerie sort of way. On one side of the road, the barren desert stretches on for miles, with the occasional shrub dotting the sand. Then on the other spectrum, the ferocious waves slam against the rocky coast in a wild and unforgiving manner. As if the sound of the crashing waves weren't ominous enough, the chills from strong wind and the lack of sun seal the deal. 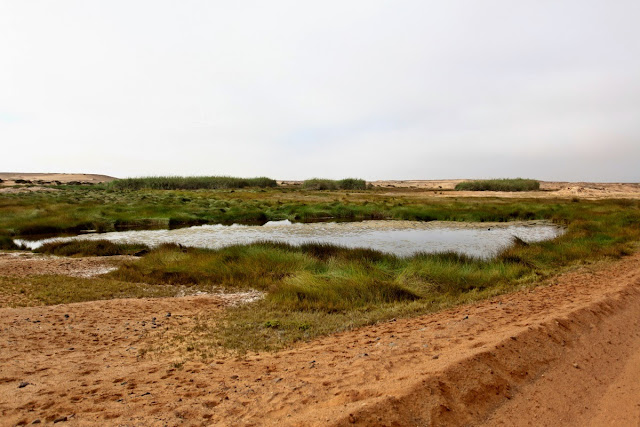 And just as surprisingly, we stumbled upon this oasis in the middle of nowhere. Flourishing green grasses lined the lake, complete with paddling little ducks and gemsbok galore. (This shot was taken day after, gemboks have cleared the place!).

We checked into Terrace Bay at 4pm and just had enough time for a quick snooze (both of us still recovering from fever and miscellaneous sickness, fatigue) before we headed out for dinner. The restaurant at the Terrace Bay hotel was jam-packed! At 8pm, all tables were occupied. We had to make do with seats at the bar till a couple finished and vacated their table. Dinner options were steak and fish - no brainer for which I went for... I was getting quite weary of steaks by then and any chance to devour seafood is a blessing!

The restaurant decor kept us occupied while we wait for our food to arrive - walls are covered in what seemed like graffiti at first, turned out to be drawings and testimonials from past visitors. There are also pictures of people reeling in 50kg megafishes that decorate the bar... crazy. But that is the sort of crowd you get in Terrace Bay - large, chunky fishing enthusiasts sporting cargo vests. 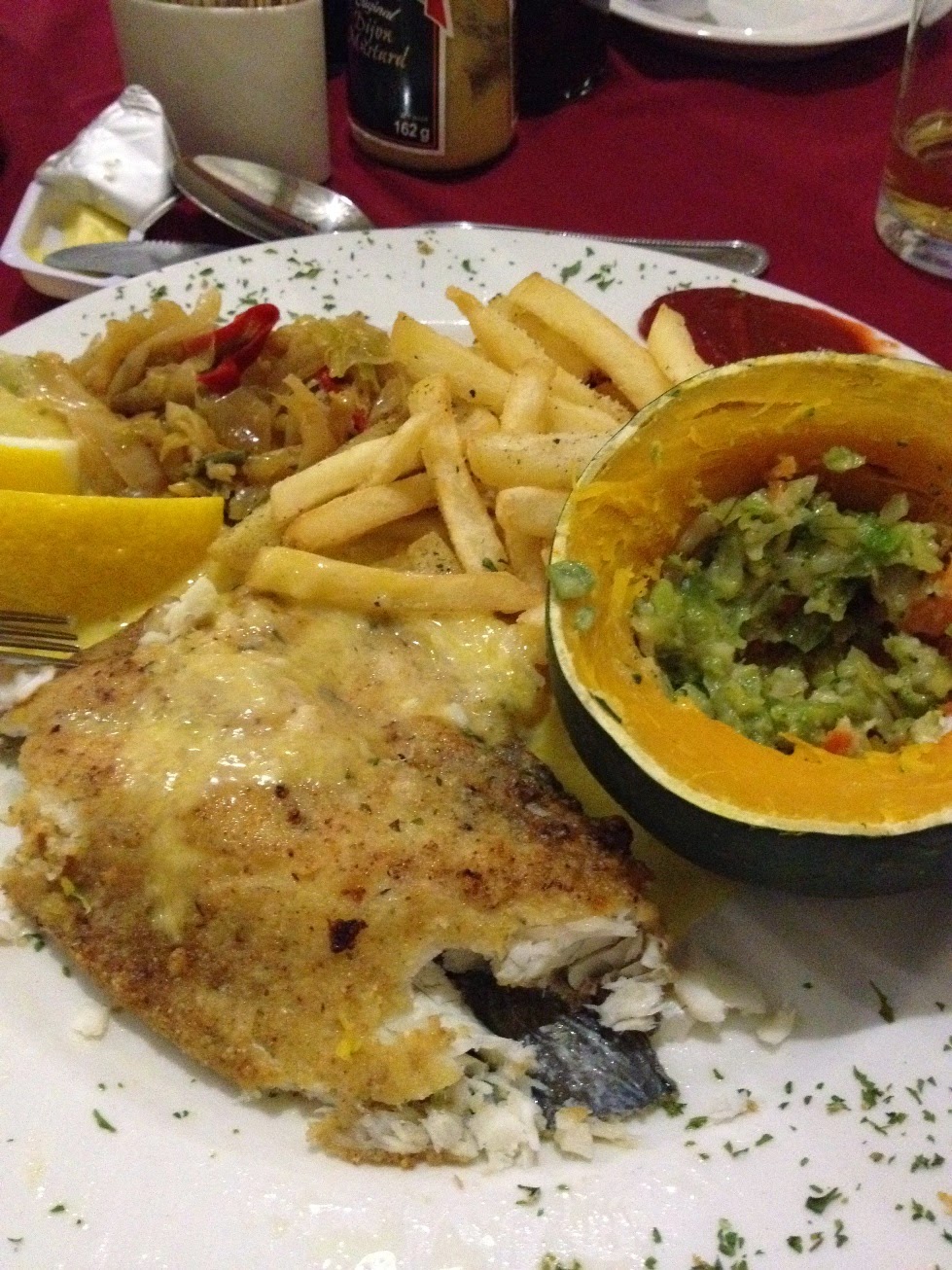 Ordered a catch of the day with pumpkin salad and fries. By now I can't remember clearly what the food was like (trust me, that in itself is quite strange. Unless it had been a mediocre meal!) but I recall many protruding bones that attempted to choke me.


We checked out early again the next day to continue on towards Swakopmund (there isn't much to do in Terrace Bay, except for driving and idly looking out the window). It is a really scenic stretch of coast, with our drive pleasantly interrupted by poking our noses at wrecks.

As we exit Skeleton Coast Park, the vegetation gradually changed and the general atmosphere got a little more cheery. Colourful vegetation of red, yellow and green hues with blue skies make a stark contrast to the Gloom & Doom we just left behind. Oh! And just an hour into the drive, our rear tyre punctured. There wasn't any explosion or any warning except this weird, slushing kind of noise and only saw what happened when I peered into the side mirror. 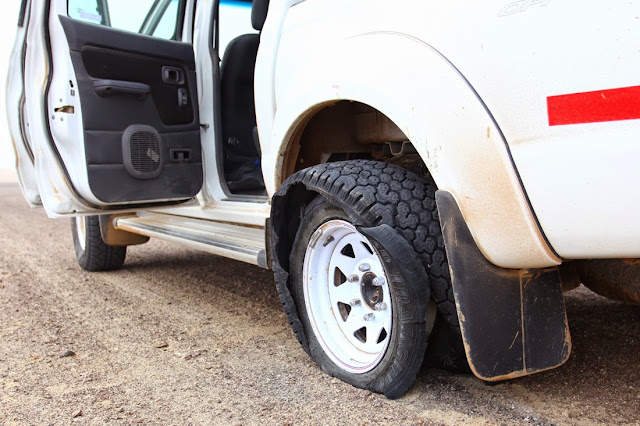 While both of us (ahem, ok fine, me mostly watching) got the tools out to fix the puncture, a very nice local Namibian man pulled over behind us and helped us out! I have a profound respect for guys like him, getting down and dirty without expecting anything in return. What a gem of a heart :) 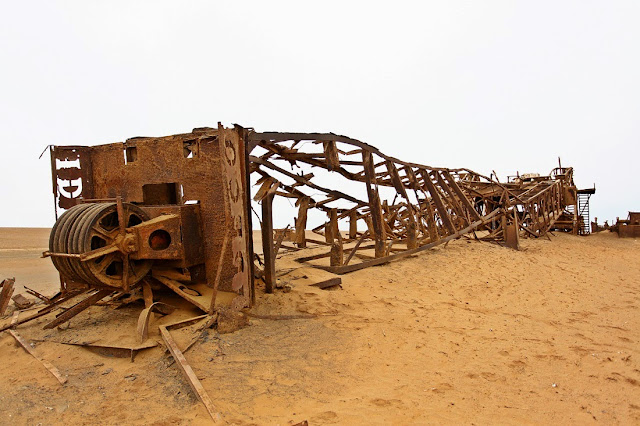 There are about 3 visible wrecks and a collapsed ex-oil rig for your viewing pleasures, should you ever feel tired or bored from the drive. 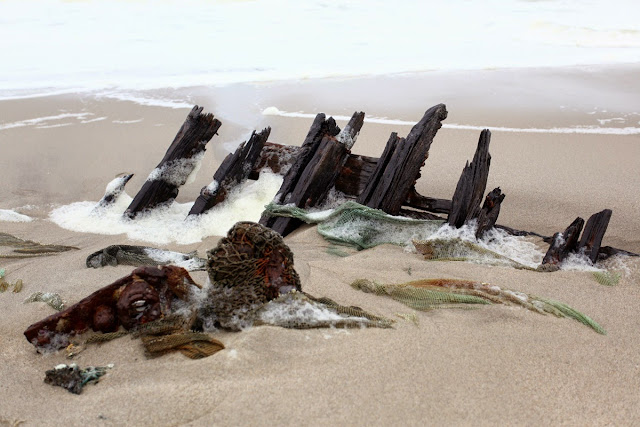 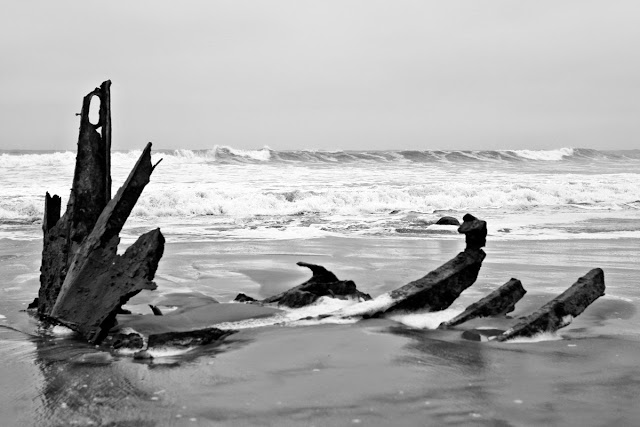 The story behind this photo: The image I had in mind in capturing the wrecks were that of the waves rushing in and as it breaks, creating a white foam around the skeletal frame. But as the waves sped in towards me, with the foam frothing and bubbling and all.... I dashed off, squealing like a little piglet.

Ahem, so, no, I ddin't quite get the shot I wanted, but this is hardly worth the spooks to get into!

So you were laughing at the photos of the puny wrecks I've posted, eh.... wait till you see this: 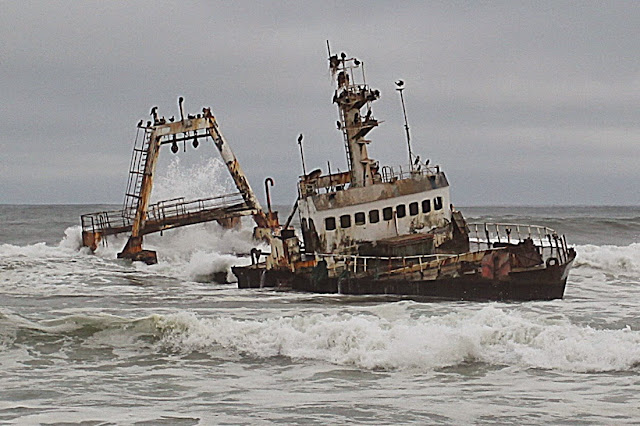 The big Daddeh of wrecks, complete with ominous crows.


It took about 4-5 hours getting to Swakopmund, including all the scenic stops and a bite in Hentiesbay. A small town for mainly fishing hobbyists where thousands of people were coming in for the long weekend fair. The star event is the fishing competition. Imagine the amount of fishing going on just this weekend!

We arrived Swakopmund by 3, almost 4pm. Swakopmund is the second biggest town after the capital, Windhoek. A charming town by the coast with unforgiving waves. As it gets dark early during the winter, we quickly headed out after checking in (to Sam's Giardino - more about this later) and explored parts of the town. It is fairly well-stocked with pretty much all the amenities you'll ever need, including a very quaint-looking bookstore complete with a little cafe. Shame it was almost closing and I only had enough time to pick up a children's ABC Africa book for little Meagan. This town definitely looks like a place I wouldn't mind settling down.

We walked towards the jetty to have the restless, bubbling sea under us - it was very scary! Especially when the waves crashed into the pillar, sending seawater spraying 3-4 meters high! Dinner we decided to have at Sam's. Best decision ever made. The dinner was exquisite. Everything that came out from the kitchen was wiped clean by us. The architecture and interior design of the B&B were tasteful, high ceilings and thoughtfully laid out lounge area. Throw in a mastiff-like dog called Beetho, and we were massively won over.


The final rendezvous of our trip - one we've been looking forward to, is Sossusvlei. Needless to say, another early checkout and we hasten on a 4-hour drive to the Namib-Naukluft Park. On the way there, we detoured to a town called Solitaire for a quick bite (it has been a long drive!). A small town with a little gem of a bakery greets us. Vinnie got mad over the meat pies and bought at least 5 or 6 of them while I munch serenely on my shortbread-bun. 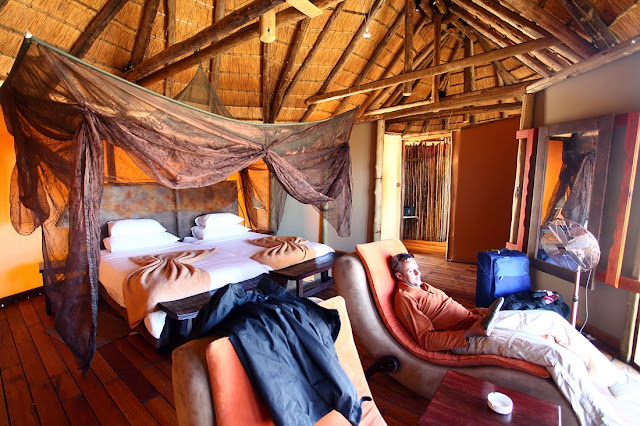 Our amazing lodge in all its grandeur. At $400 a night, it is very fancy but hardly worth the price! Meals were inclusive but they (steaks again) were average - the wonderful meal we had in Swakopmund was ten times better! The only reason we wanted to stay in the Sossusvlei Park lodge is so that we can stay within the confines of the park till sunset, and venture out before sunrise for the photo opportunities. Visitors who are not staying in the camping grounds or lodges must leave the park before sunset and can only make their way in through the gates at sunrise.

Anyway, bitching aside, we freshened up and packed our camera gears. Water bottles and 3 meat pies were stuffed into our backpacks too, just in case.

We drove towards the parking area, and then got into a shuttle 4WD truck (that can easily fit 10 passengers) towards Hidden Vlei. We could have driven in, but it is very sandy and would have been risky. Plus, we've had enough problems with the vehicle as it is, and just wanted to play safe this time (got charged $160 for the busted tyre).


There are a few Vleis (which means plains) in the vicinity, and we decided to start with the Hidden Vlei, and to leave the Dead Vlei for sunrise the next morning. So we trekked for 2km over sand dunes, the wind chilly but the sun strong on the back of our necks.

It. Is. Incredibly. Exhausting. To. Walk. Across. A. Desert.

For every step we took uphill, we slid backwards two steps because of the loose sand. Even though it was only 2km, it certainly wasn't quite a walk in the park! 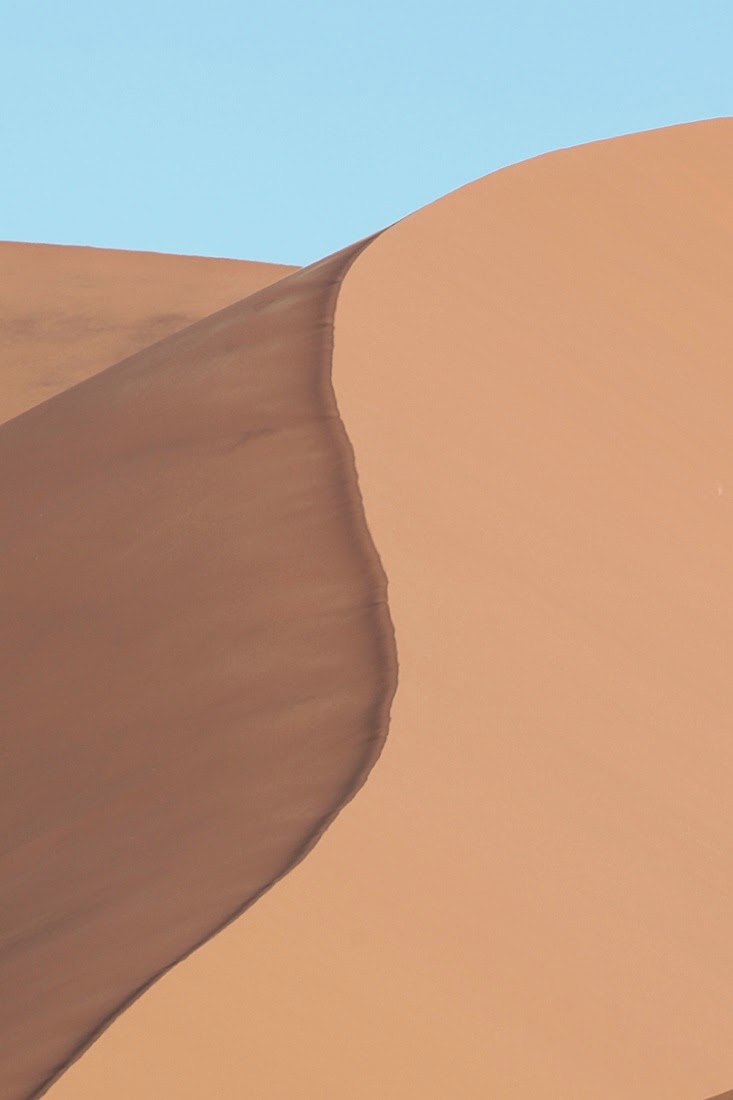 Still, we were spot on with Hidden Vlei - we were the only ones there! There weren't any dunes in the way of the setting sun too. Superb photo op without cumbersome tourists getting in the way, nothing more we can ask for. 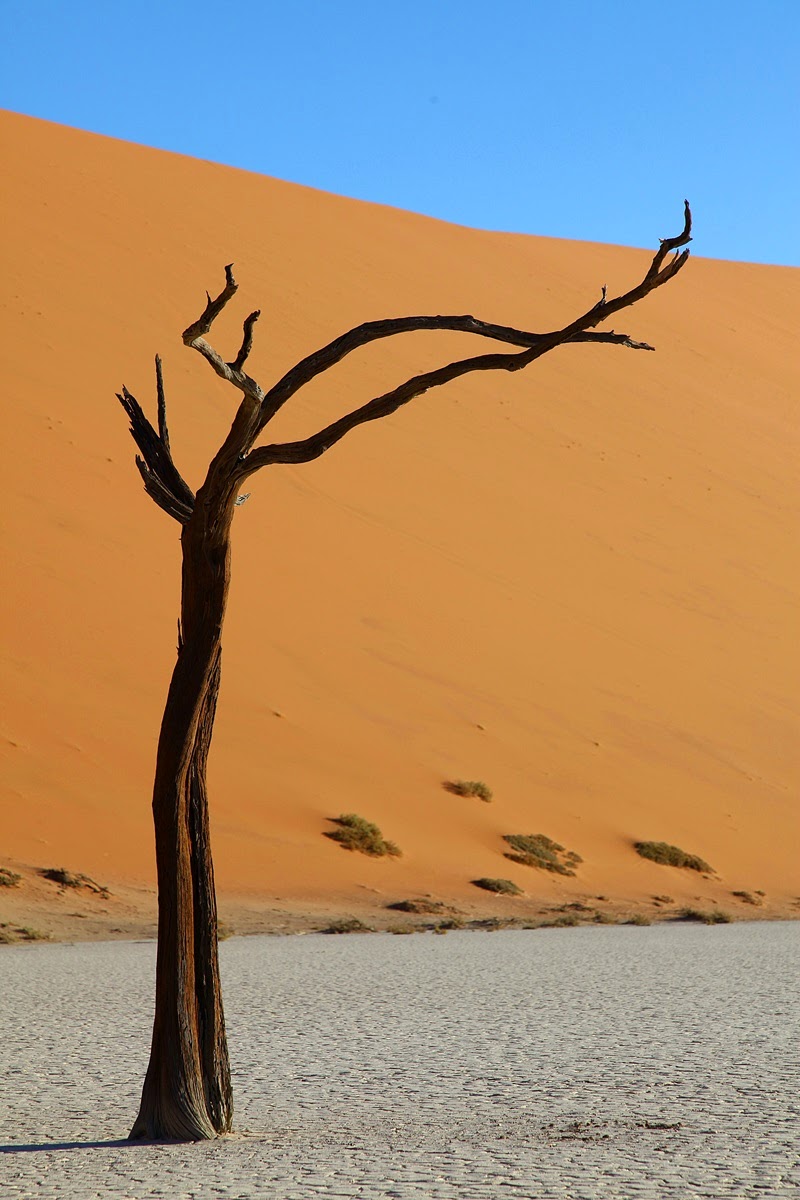 An intriguing sight: Dead acacia trees contrasting wonderfully with the almost-white plains against the rust-coloured sand dunes. We spent almost 2 hours wandering around the vlei, trying to get the perfect shot.

The plains are high in salt concentration, hence its colour. A river used to flow through the plains,  hence giving life to the now dead acacia trees. Over the years (maybe even thousands of them), the river dried up, leaving the withered trees in a most artistic fashion. 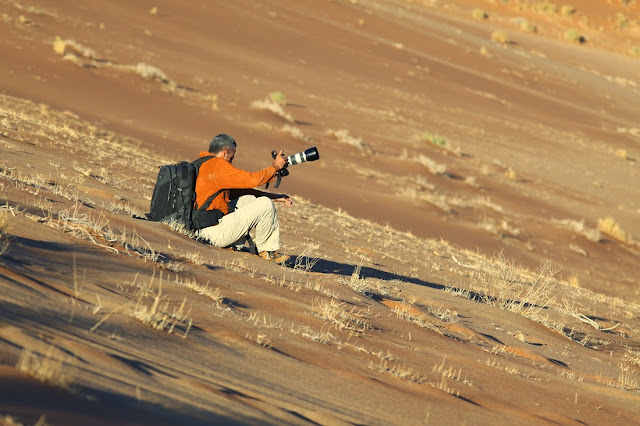 Our dear photographer is most certainly dressed for the occasion :) 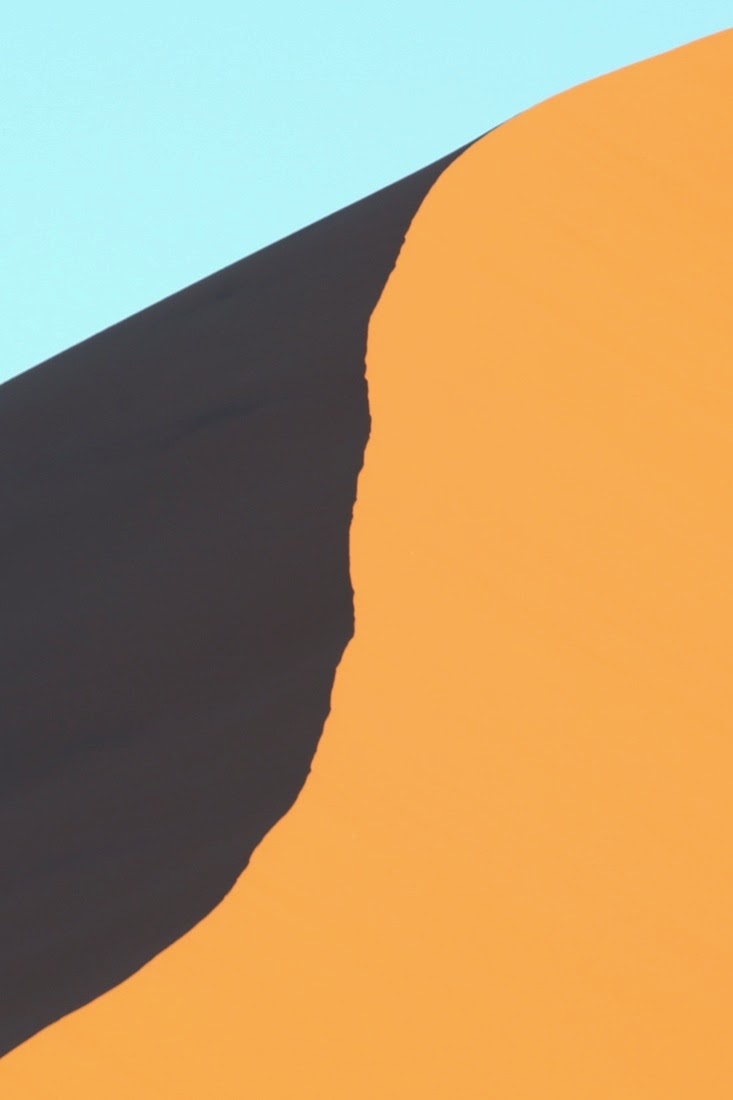 The orange and some close to blood-red dunes get their colour from the high iron content in sand. 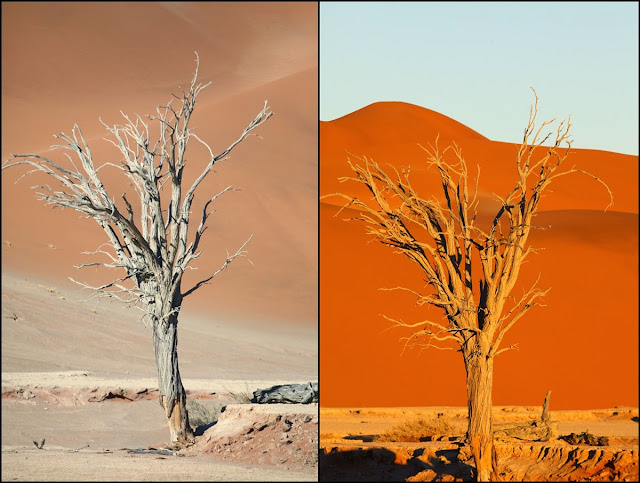 How much impact the magical hour gives to photos - a brilliant, fiery hue at sunset.

We were definitely the last ones to leave the park... saw a couple other cars making their way back to the lodge/campsite hastily too hehe. Of course we want to milk it for all its worth and indeed the sunset shots were worth it!

Knackered from the evening acrobatics, we settled in for an early night. As we sat on the verandah of our posh African lodge, my jaws drop at the star-filled sky. Oh, my. I've had some amazingly beautiful views of the night sky while onboard and on other isolated islands, but this has got to come out tops.

We were really blessed - thank our lucky stars (heh, couldn't resist), the night was so intensely dark that I could even see the stars on the horizon! THIS I've never experienced. No signs of the moon, no other interference of light, just velverty dark skies filled with the careless litter of millions upon millions of twinkling stars... 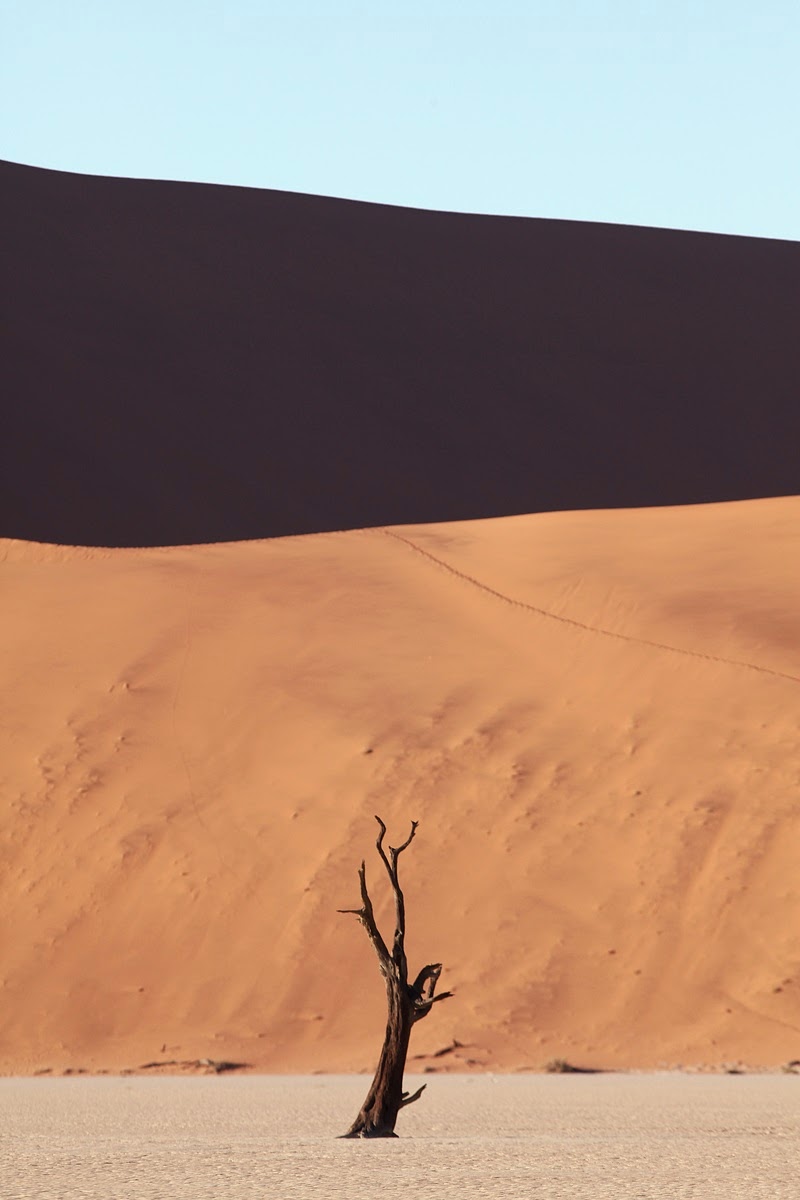 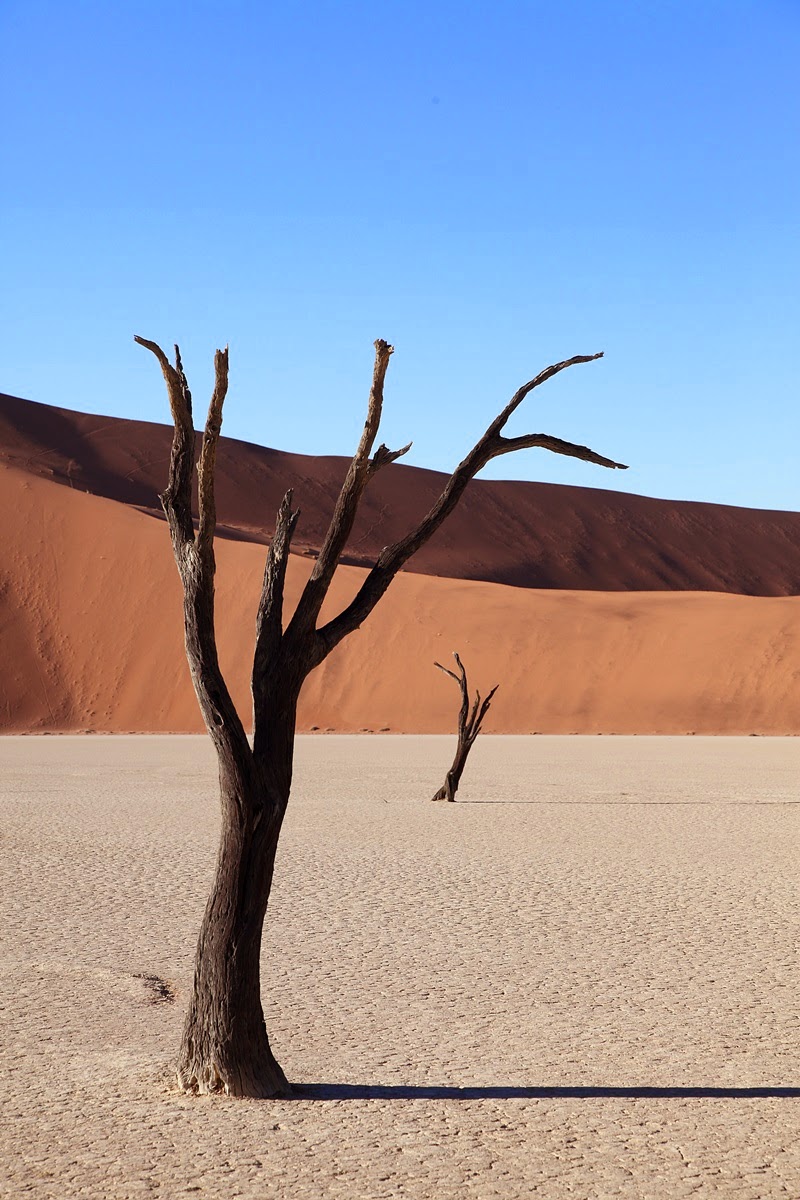 Really pleased with the photos I managed to get there and just like that, our 2-week holiday comes to an end.... I absolutely love Africa, the dry weather sucks, but the sights are out of this world. 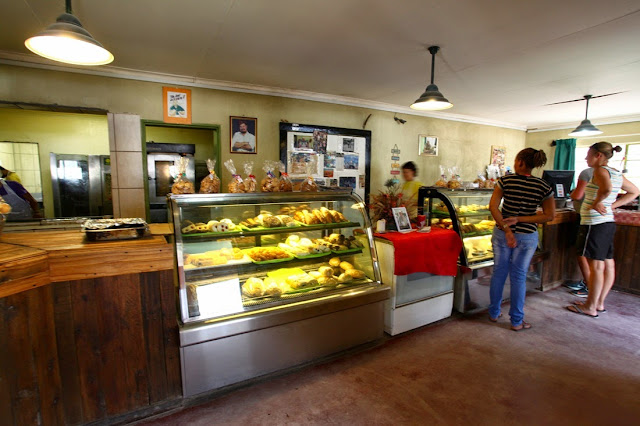 I shall conclude with a shot of V's meat pie addiction :)

Posted by Su Yin at November 17, 2014
Email ThisBlogThis!Share to TwitterShare to FacebookShare to Pinterest
Labels: Around the world - Africa
Location: Namibia