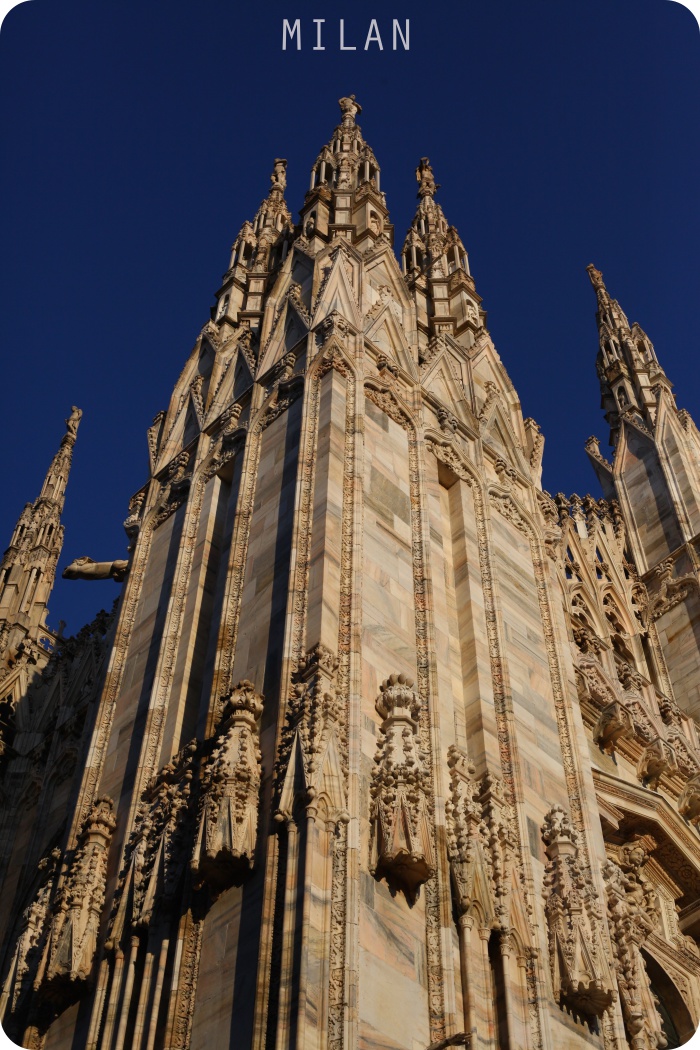 ...Can best be described in three words: Hot, hot, humid and hot! Ok, that was four. And fine, it was summer.

The heat was almost unbearable, at this time I also started my menstrual cycle (heh) which made me fatigued. Not a good start!

And what's up with laundry in Milan? Finding a Launderette was a chore of its own, we finally found one close to the hotel, but they only do shirts, coats and the likes, no intimissimi! I need clean underwear!

We arrived in the evening (after failing multiple times trying to get a cab that could fit us and our bags - we ended in two separate cabs...) and Vinnie googled for a recommended restaurant nearby which still took us a good 15 minutes' walk to .... a Chinese-Italian joint. 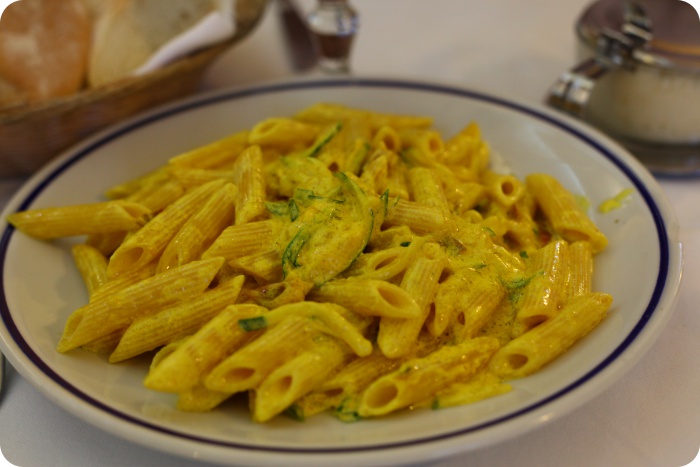 A skeptic at the start (dragon paintings, splashy Chinese ornaments) but I was won over quickly.

I ordered a saffron and zucchini penne - Wow, what a surprise it is. Simple but done to perfection. Penne is cooked al dente, and it's the first time I've had a saffron and zucchini combination, what a winner! Also a refreshing change: meals hover around €5 and are a hearty portion! We also ordered another plate of sausages - visually they look mediocre but were yummy!

First stop to the Piazza Duomo (possibly the biggest attraction in Milan) only to find out I was too skimpily dressed to go in. We have already bought tickets from the booth and had gone in the line! Conveniently, scarf peddlers waved overpriced shawls to cover my modesty. I refused to let them profit and instead we went shopping for clothes. 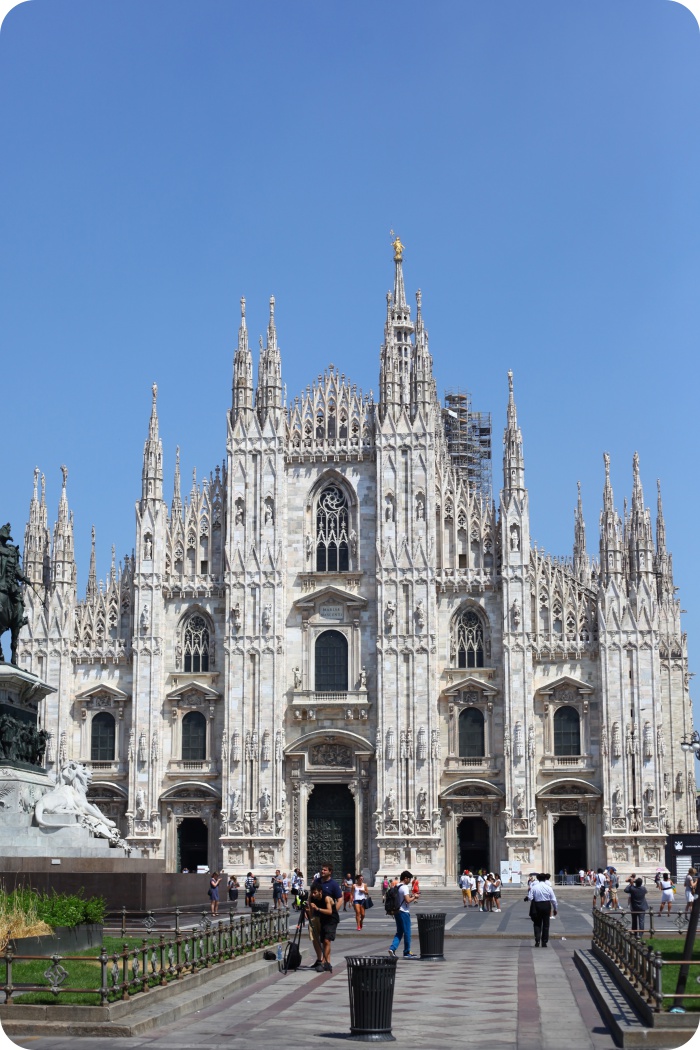 Funny though, we were in Milan for slightly more than 2 days but we could hardly find time to visit the Food Expo! We were scouring boutiques and malls - a shopping haven if nothing else. Besides, it gets too uncomfortably hot and humid to be outdoors.

We also found a great way to save on buying drinking water and hunting for toilets. We'll stroll into a luxury boutique and show interest in a few products (you look more like a serious buyer if you want to see something specific, a little research helps!), and gradually you'll be offered water. And the washroom, if you ask. 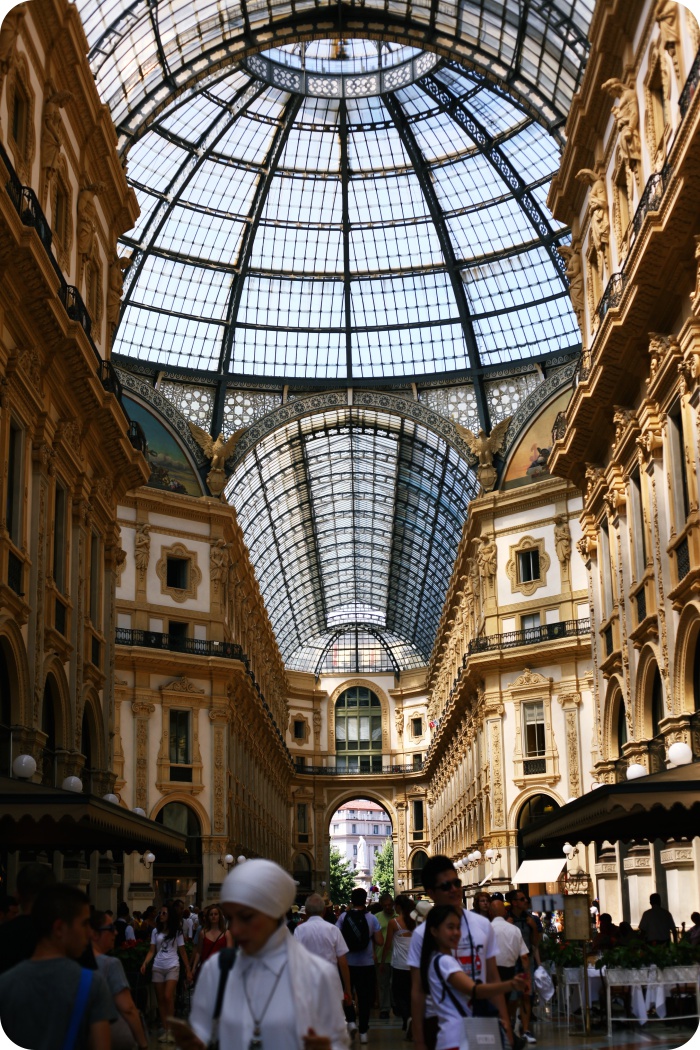 We had a brief debate about costs of meals between Italy and France. We find that in Italy, prices for meals are generally lower, but they don't ever seem to serve tap water and charge some €1-3 for a bottle of water. Which is a shame, considering the amount of waste the bottles of water generate. On top of that, there is also a charge for "location and seating liking" of approximately €2 per person!

France may be more expensive for meals, but there is no charge for seating (not that we encountered) and you can opt to have a caraffe d'eau (jug of water). So really, meals in both countries cost about the same in the end.

I am also completely in love with Italy's famed cuppa! Even at the hotel, where substandard coffee is the norm, the coffee is surprisingly delicious!

To visit Milan but not to try panzerotti is a blasphemy. 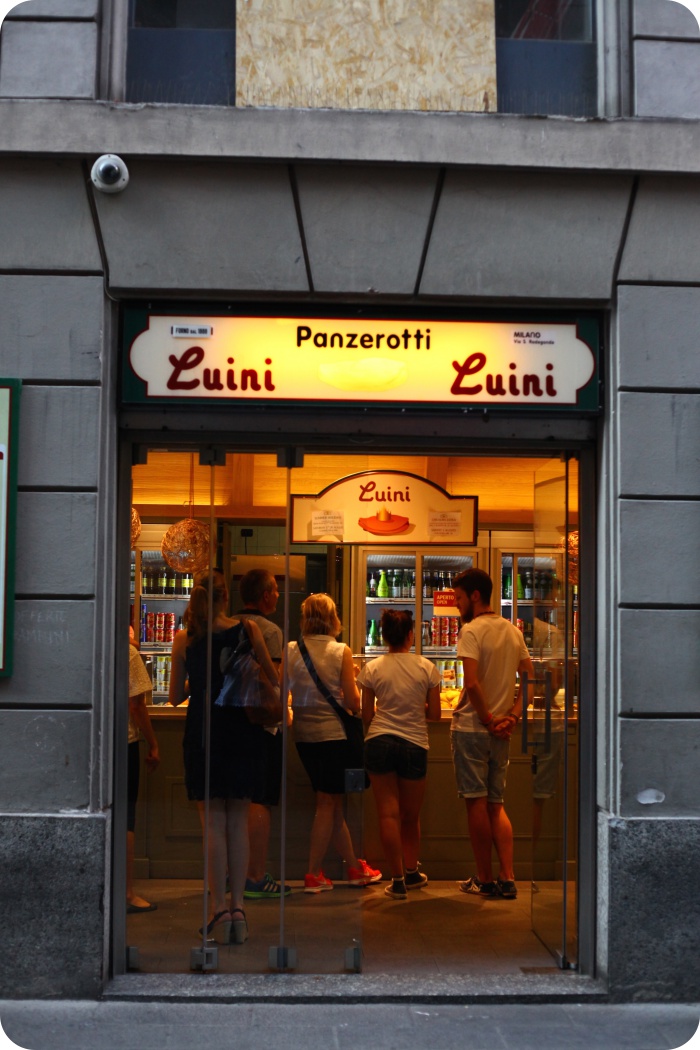 To be honest - I think they are over-rated! We didn't manage to get the baked variety and only had the fried ones - they taste greasy. The default panzerotti is with a tomato and cheese filling. They might have been nicer had they been baked. 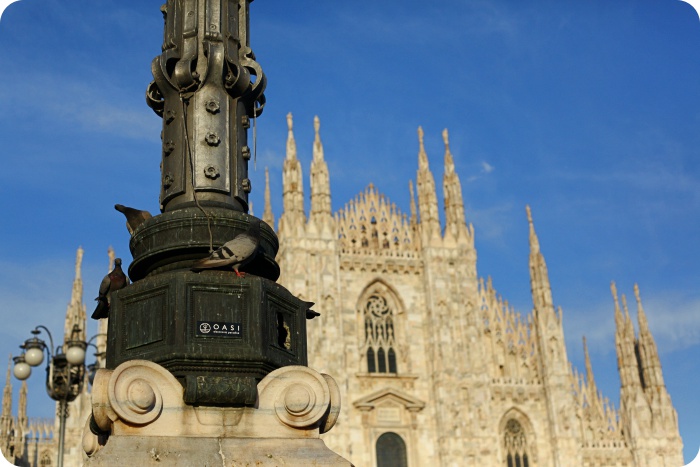 Not mush sightseeing, but plenty of eating! Behold, the pasta galore we have indulged in: 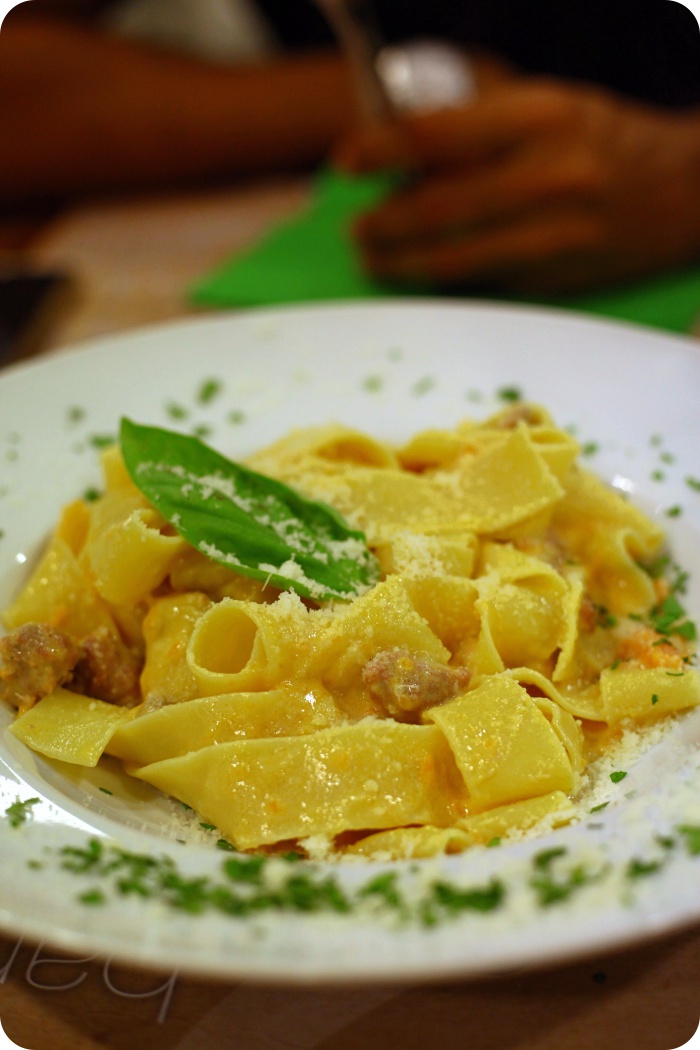 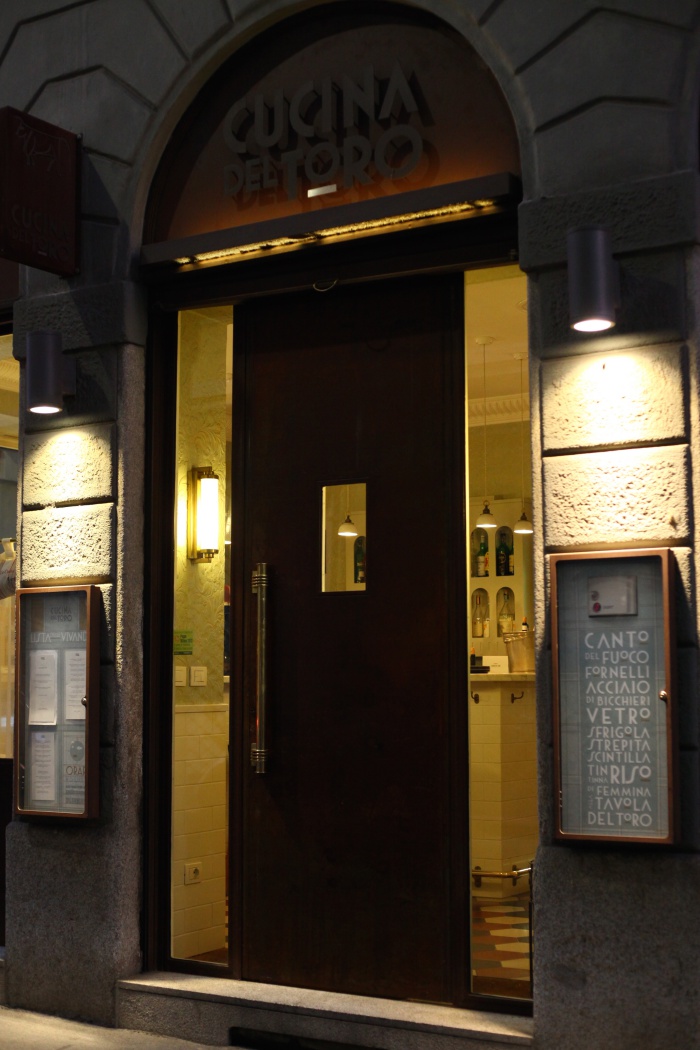 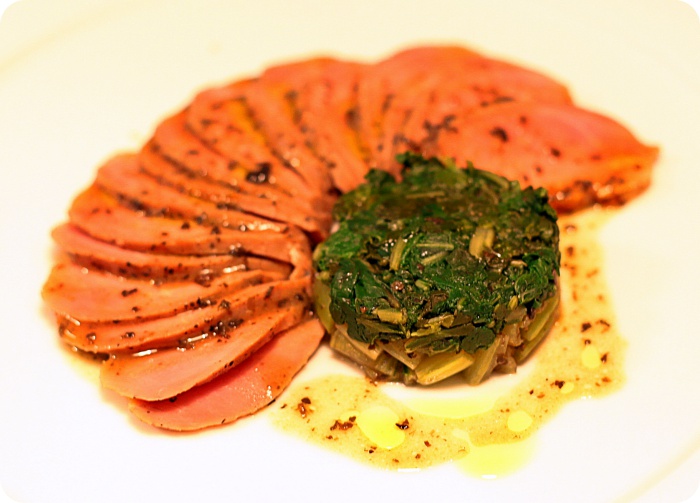 A squid ink pasta served with tomatoes and seasonal veg. 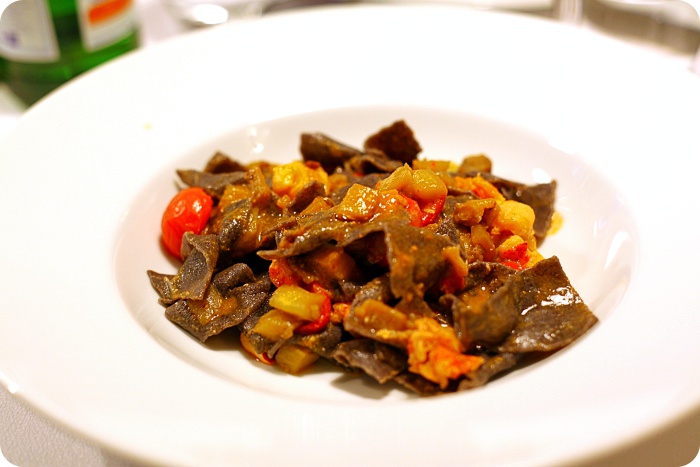 I find the pasta in this case to taste a little flour-y (if there is such a description!). 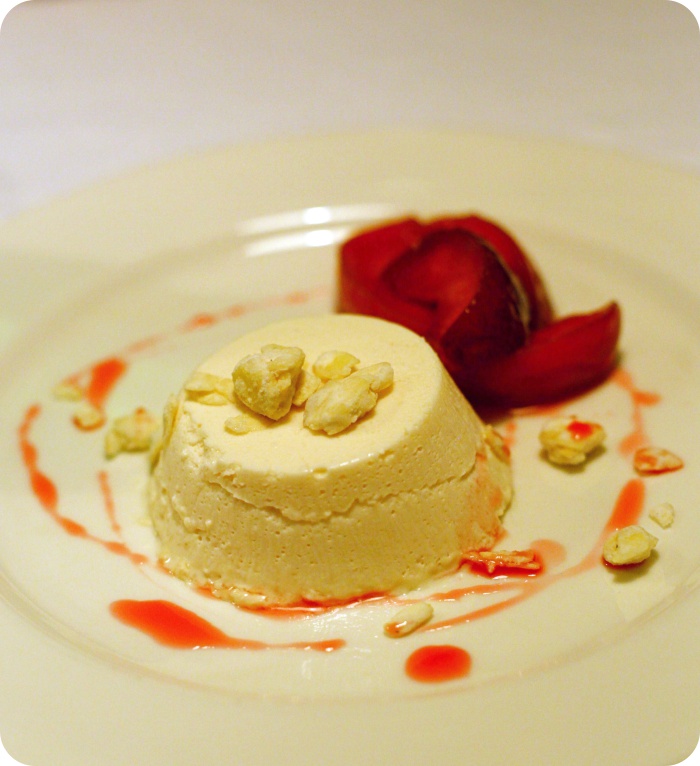 And of course, panna cotta.


A restaurant that I've picked from Trip Advisor (and also because the owner seems like a no-nonsense lad) requires reservation because it is very popular: 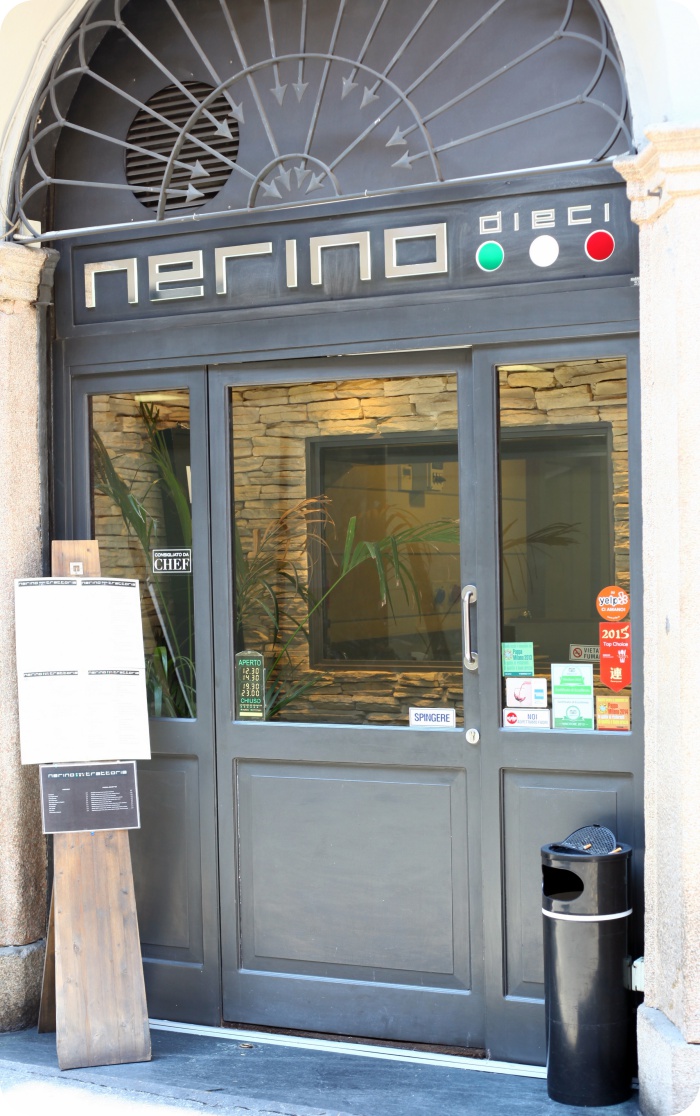 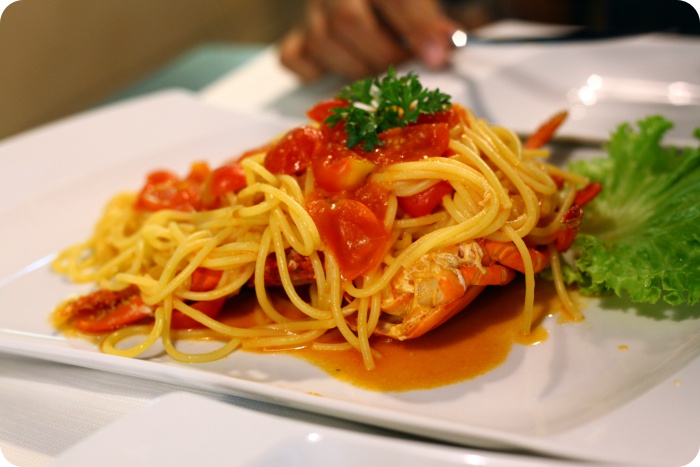 It wasn't that memorable, to be honest. Pasta was perfectly cooked, but I think that's a given in this country. I was disappointed they hadn't bothered to remove the lobster shell - so we made a huge mess trying to get every piece of lobster flesh out. 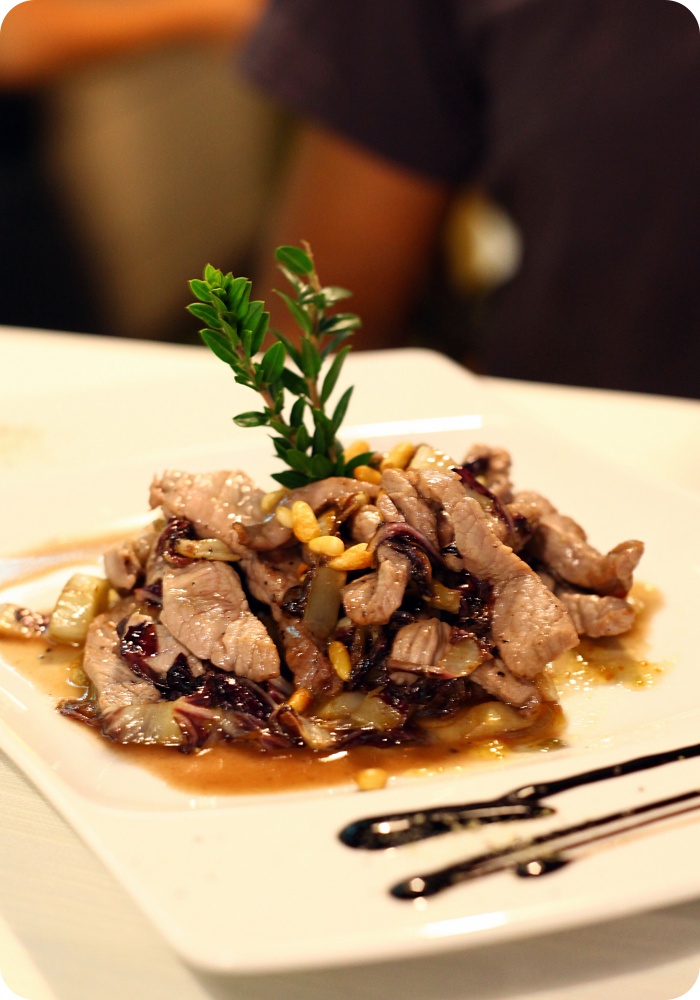 This was delicious though. Slices of tender beed with pine nuts and a reduction of balsamic vinegar - yums. 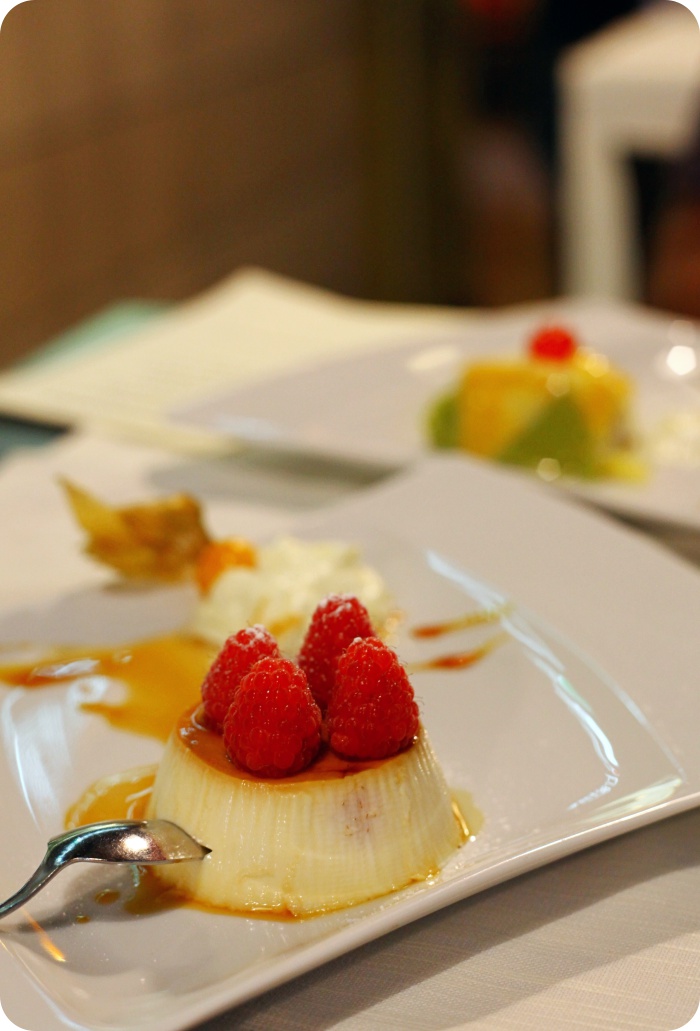 Another plus one for panna cotta!


Al Cantinone Trattoria is highly recommended, one of my favourite joints in Milan. 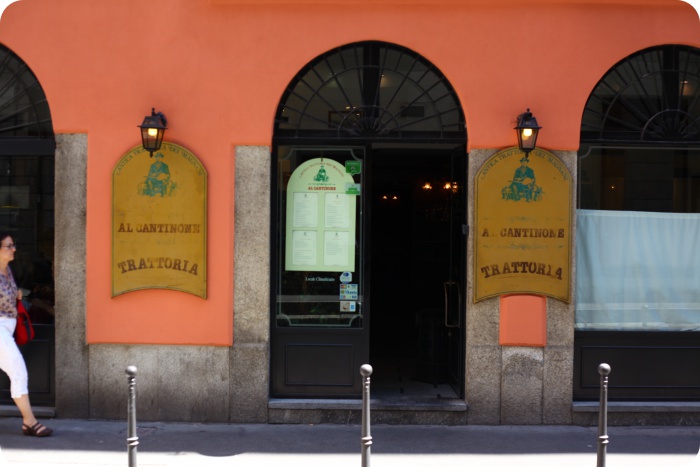 Because this is easily the best pasta I've had. Gnocchi with zucchini flowers and shrimps. Simply divine. 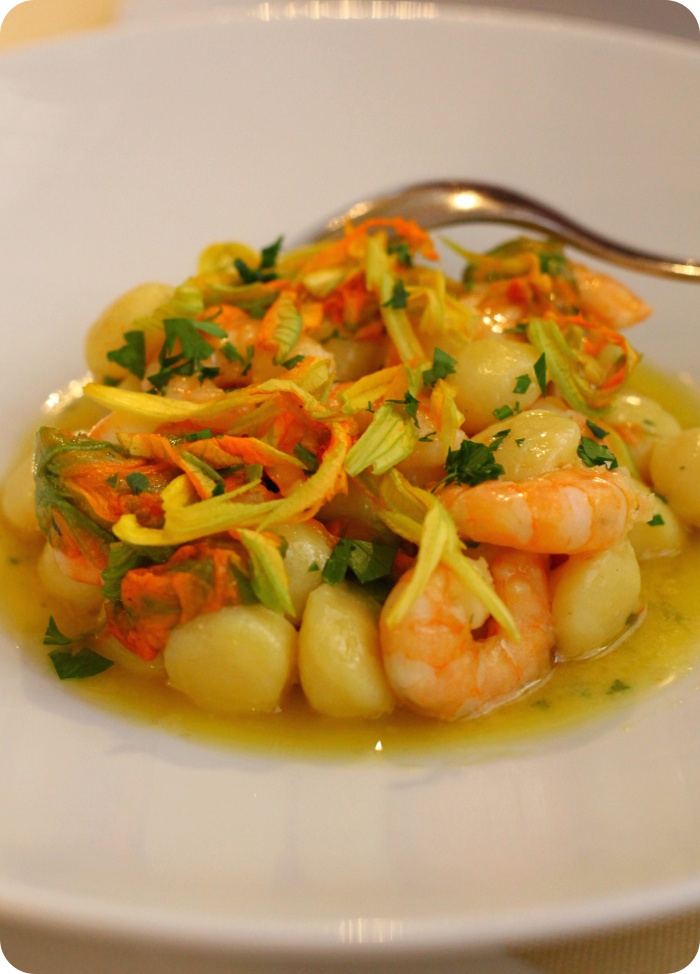 I don't ever remember liking gnocchi because they seem lack texture but Al Cantinone makes them beautifully and they go well with the slight crunch of zucchini flowers.

Then lamb with rosemary. 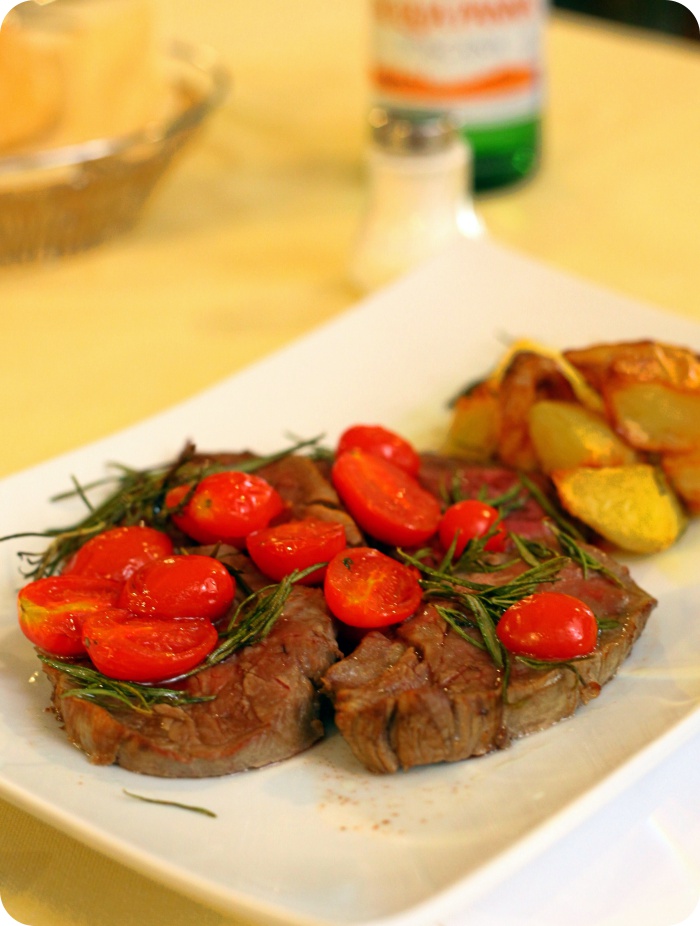 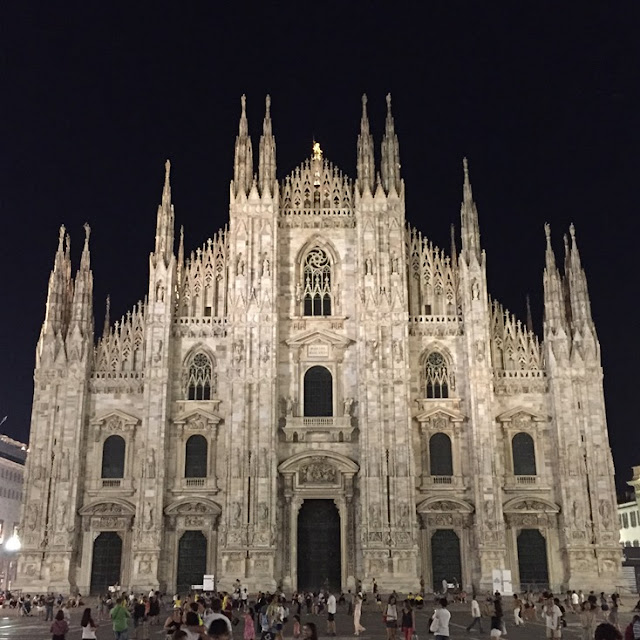 The inevitable outcome of spending two days in a shopping haven: splurging heavily on handbags.

I've not been the type to spend hundreds, much less thousands, of dollars on a piece of accessory. However, prior to the trip, I've scoured websites to check out if any handbags catch my fancy. Naturally, a deep desire started brewing and before long turned into an all-consuming fire: I MUST have a Chanel handbag.

The Chanel experience:
We walked into the swanky Chanel boutique close to 1pm and the place was full of shoppers (no prizes for guessing where they're from). All (only about 2-3 of them!) of the assistants were busy and we were left standing there, looking clueless. I asked the host if she could help me but she apologetically said she couldn't, as she is only a hostess. You aren't even allowed to handle the handbags on your own (as one customer learnt in a harsh way when the security guard asked her to not touch the bags without an assistant!). It was lunch time, half the staff were out, so we left and came back 2 hours later.

Second time lucky, we were attended to in a jiffy. I could only look at 3 handbags at any one time, due to some bull security reasons. It gets a little discomforting as other shoppers who are waiting for their turn with a shop assistant wanted to look at some of the bags I was trying. The SA I was with told them not to interfere as I was still deciding. Oh jeez. Talk about pressure!

In hindsight, that boutique in Milan is a little more strict than others. When we were back in Paris at another Chanel store, the assistant was very relaxed and easy-going, taking out more than 5 bags at a time for me to check them out.

I tried a few bags but it was almost an easy decision! I sort of know what I wanted but the real struggle was justifying that much money for a handbag! I finally caved in - the Chanel boy bag is every girl's dream - but I am turning 30 and I deserves it! :) :) 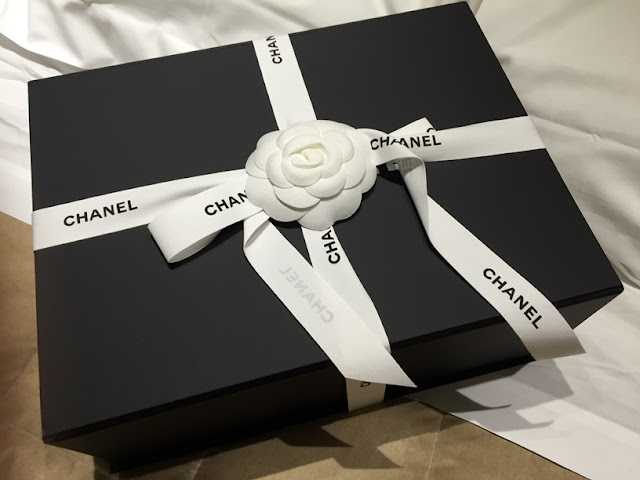 And finally, waltzing into shops with a Chanel shopping bag does get you more attention and TLC. At LV, we weren't offered just water, but coffee, Coke and the likes ;)

Posted by Su Yin at September 03, 2015
Email ThisBlogThis!Share to TwitterShare to FacebookShare to Pinterest
Labels: Around the world - Europe, Clicks, Food-Angmoh Chiak