Smack in the center of Turkey with a vast and rugged terrain is Kapadokya. The region strongly reminds us of the rough but ethereal beauty of Damaraland in Namibia. My biggest regret this trip was not packing in my DSLR as photo ops here are abundant!

The weather could have been better too. It was quite warm! On the bright side (heh), long daylight hours and it wasn't humid.

We took the flight from Istanbul's Ataturk airport to Nevsehir. Relatively short flight - just slightly over an hour. 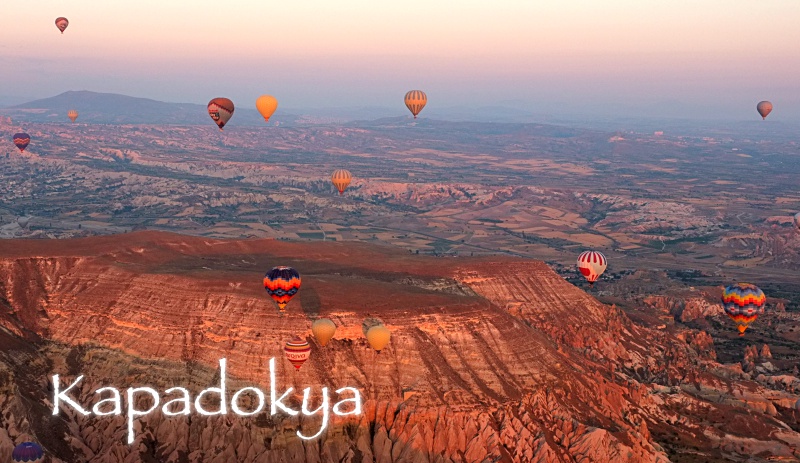 We got straight to business as soon as we dropped off our luggages at the hotel (Sultan Caves Hotel - they claimed to be a cave hotel, but it was a faux!) and rented mountain bikes to explore Kapadokya.

Hardy choice! It was tough riding on the mostly sandy terrain - no traction but that's, um, part of the fun! (that is, if you're into self-inflicted pain). Hardly surprising we were the only ones on MTBs - others, with more sense, were in ATVs, motorcycles and even horses, I kid you not.

Check out the landscape - funky phallic boulders (a lot of them look an awful lot like the menhirs Obelix transports!! Ah, fond memories of them Asterix comics), barren mountains.... all looking like a scene out of Ants.

Under the shade, it is quite pleasant. But the barren terrain means minimal protection from the sun and within 2-3 hours of riding, I was sweating buckets. The heat eventually got unbearable and increasingly uncomfortable to enjoy the scenery.

So we made a pit stop at a village - and discovered a little gem of an eatery. 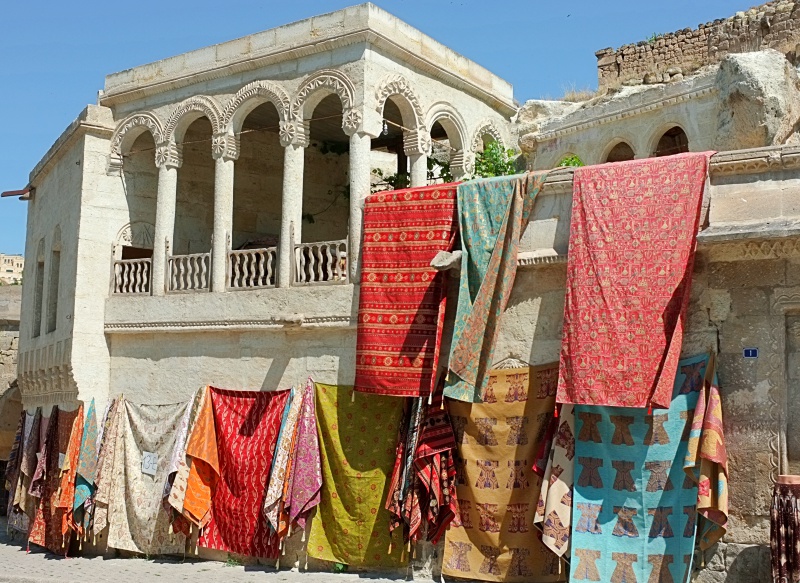 And just opposite the eatery was this view: 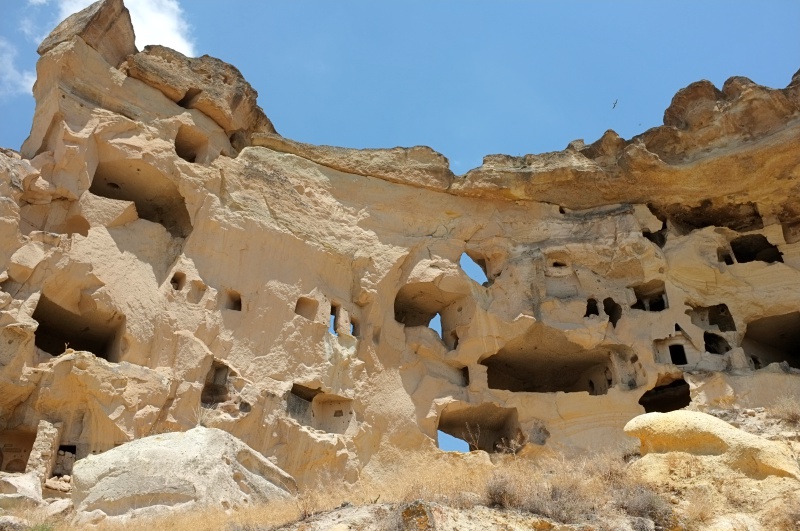 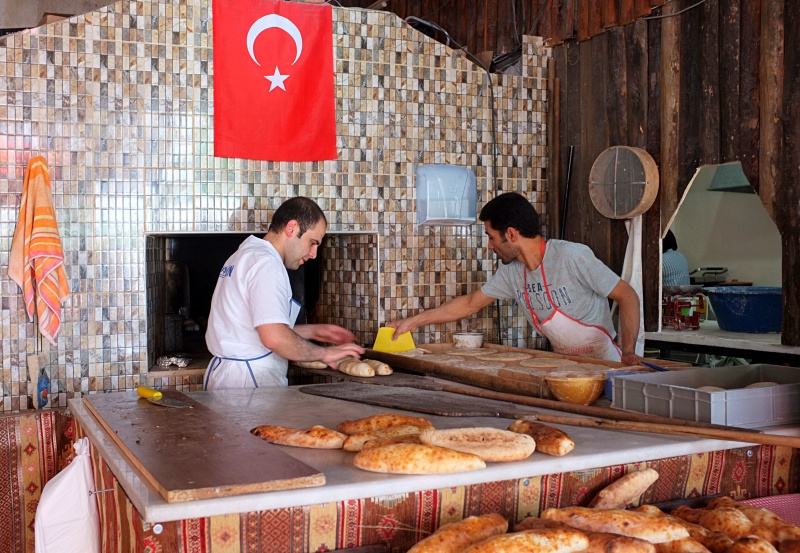 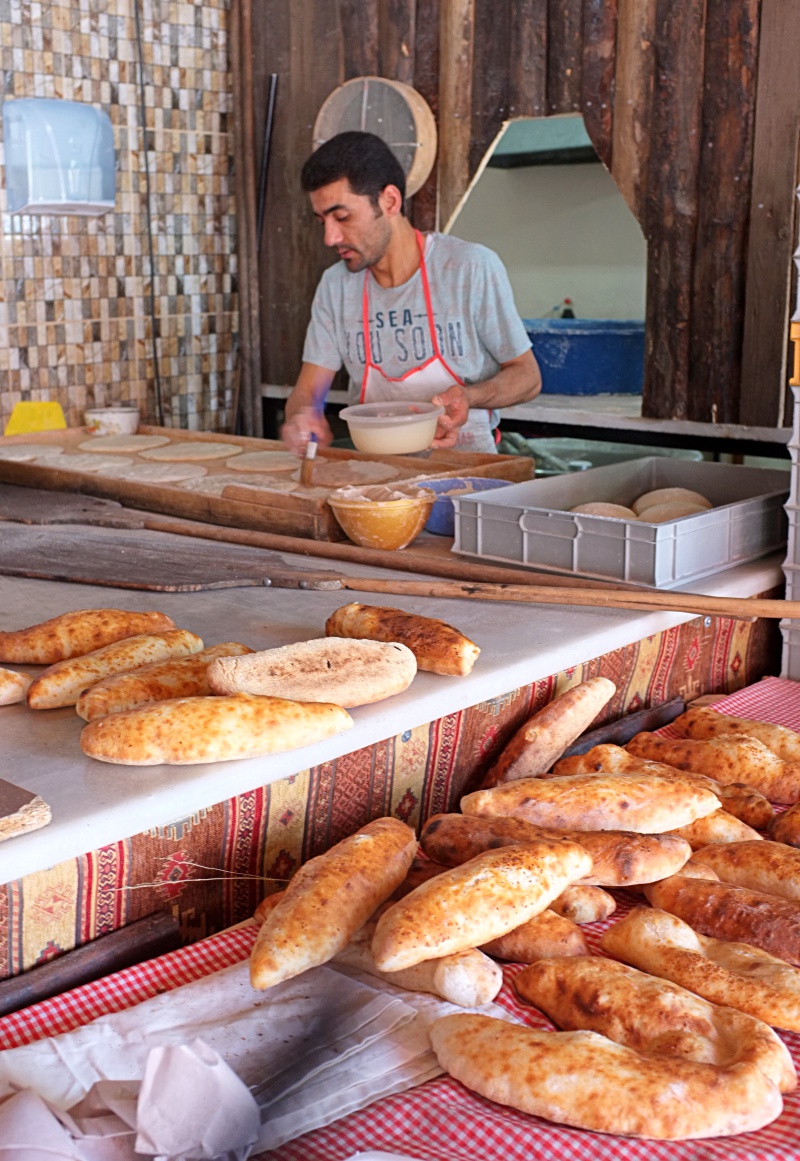 Those beautiful golden bread - fantastic! Pillow-soft on the inside, and just slightly chewy in texture. 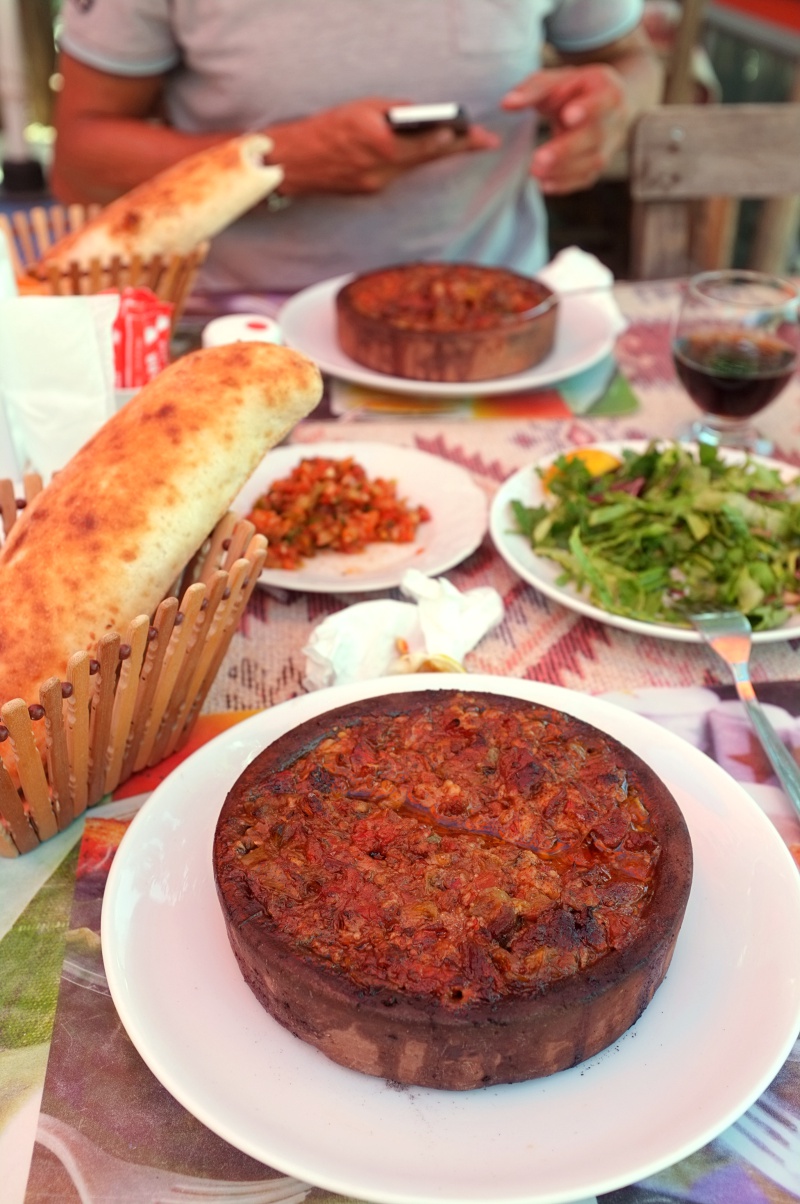 Then there was this roasted lamb thingie - with spices, tomatoes and the likes. It was a little on the greasy side, but hey, we were both starved after a monstrous workout.

After a couple more hours of baking in the sun, I called it quits, I know... shameful... - I had started to develop a mild headache. Vinnie continued on while I crashed in our faux cave hotel room.

Restaurant choices weren't exactly highly rated in the area, and we settled for the restaurant at our hotel, Seten. Because a quick search gave us above average reviews of the place. Huge mistake! It was easily the worst meal we've had in Turkey - incredibly sour entree of lemon fish of some sort, some very salty dishes and nonchalant service.

A number of guests from our hotel were picked up at 4am, and dropped off at the hot air balloon agency. After a quick registration and signing our lives away, we were ushered to take breakfast. Some rushed to the loo to get business out of the way, heh, no toilets in the balloon. Finally, we were asked to board the vans and for a 10-minute ride to the launching field. Honestly, the whole breakfast affair could have been scrapped and I could have gotten an extra 45 minutes of sleep... grumble grumble.

I was keen to capture shots of the sun rising but by the time we got to the launching field, it was a quarter past five...... It isn't looking well - sun rises at 5:30am in these parts!

I was starting to get just the slightest bit annoyed. The whole breakfast affair was unnecessary, in my opinion. And I started bugging our pilot, Kaan. I applied pressure on him, asking if we are able to take flight before the sun rises because I had signed up for the balloon ride for photos, and he confidently said of course. But I suspect he had to change the order of flights so we could take off first. We were initially scheduled to launch last but we eventually went second last. 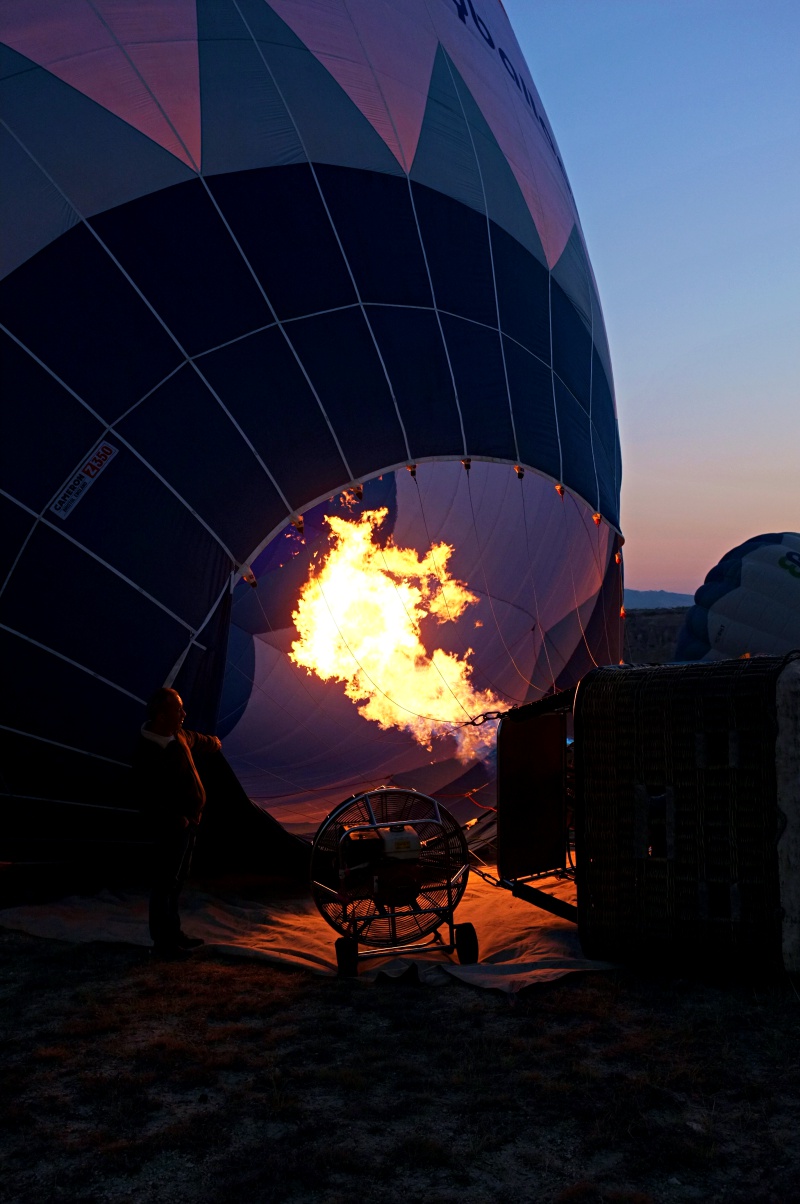 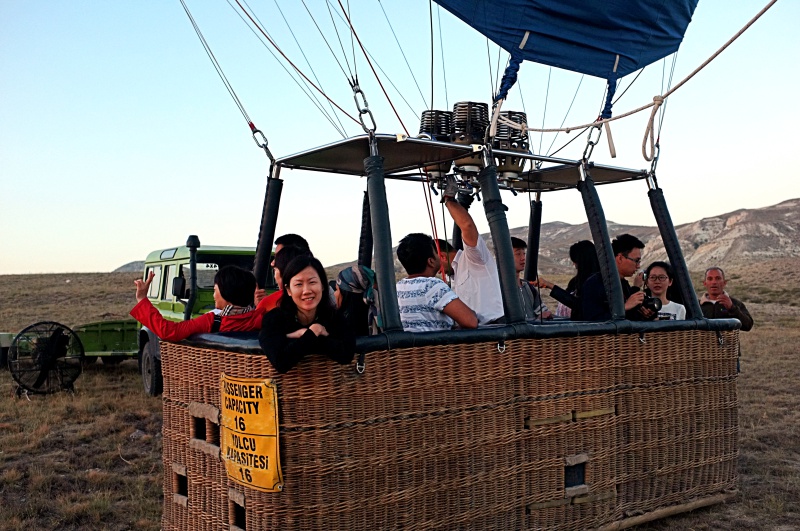 Hehe. I call this, the Asian basket.

Each hot air balloon basket has a capacity of 16 pax. The baskets are partitioned into 4 sections, with a maximum of 4 to each section. On that day, there were 12 of us (we were all Asians! Now, I wonder if they do a racial segmentation?!), so there will be 3 to each partition.

When the balloon was ready to load us in, I was assigned to a section with an Indian couple. As I started to clamber into the basket, the female said, "sorry, this is only for 2 pax". Me, already annoyed at the increasingly late departure, snarked, "oh? Got yourselves VIP seats?", and continued climbnig in through her displeasure while her boyfriend gave me an apologetic smile, hehe. 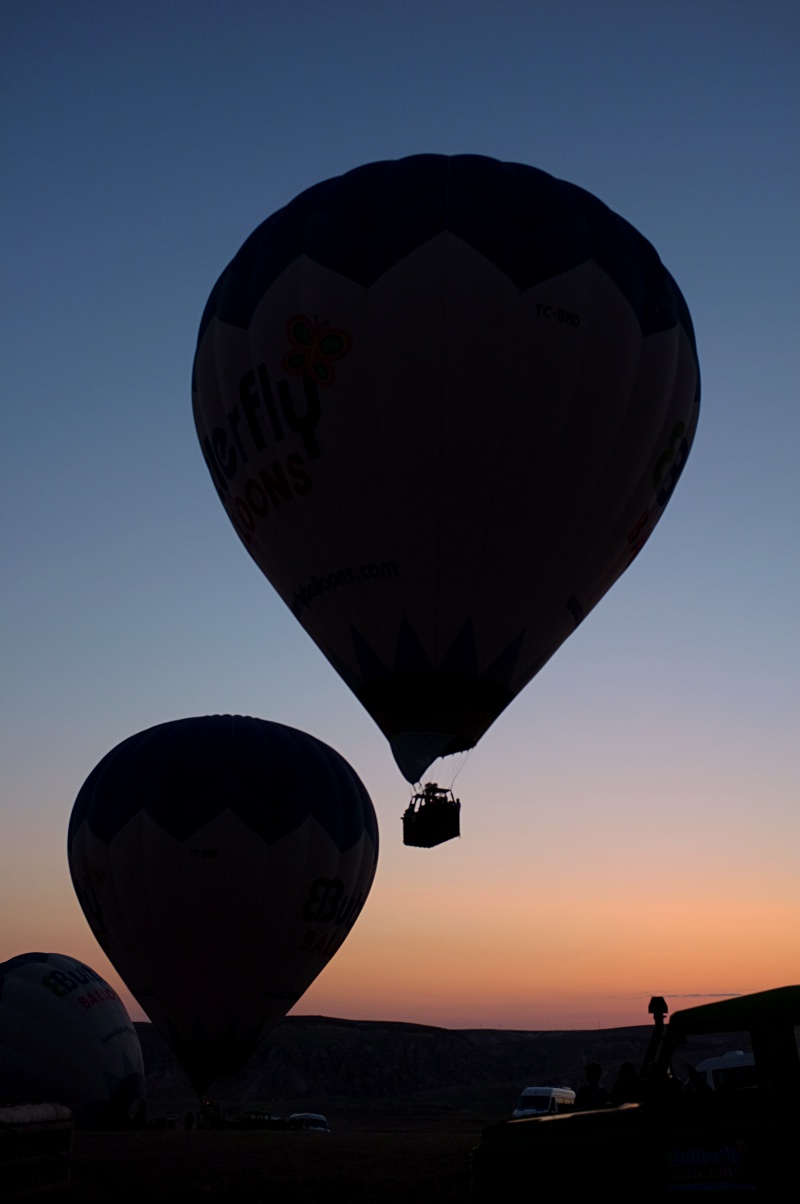 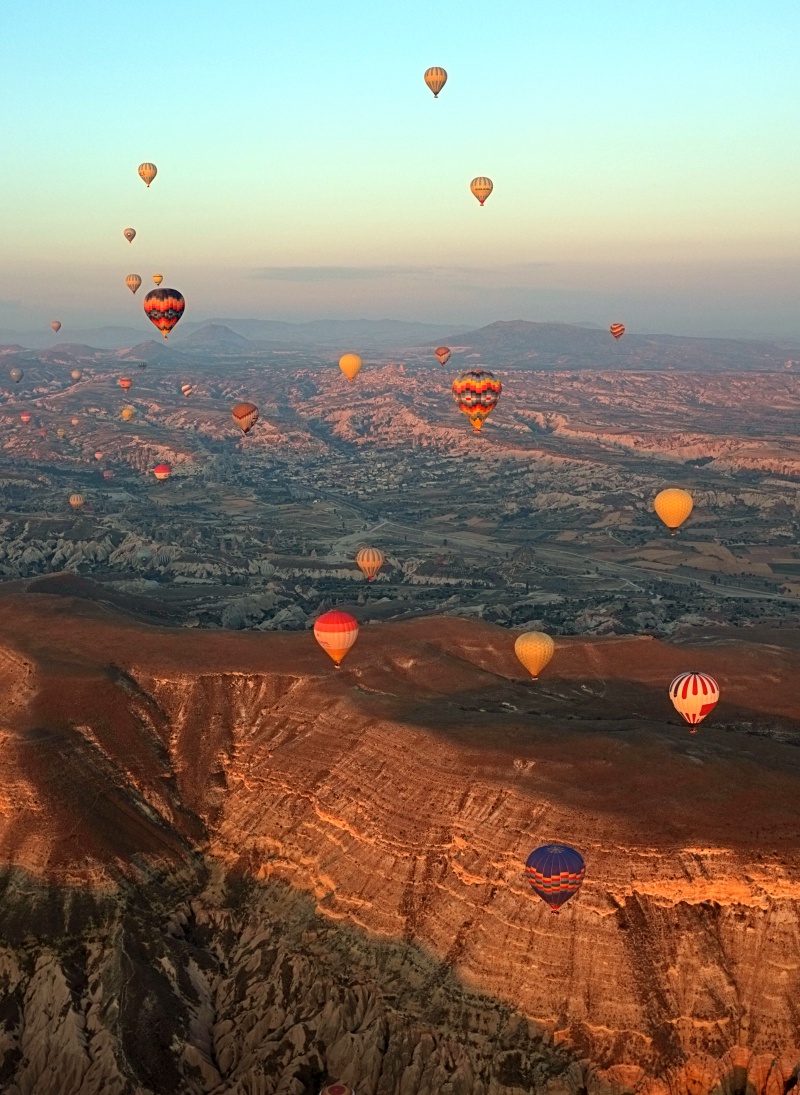 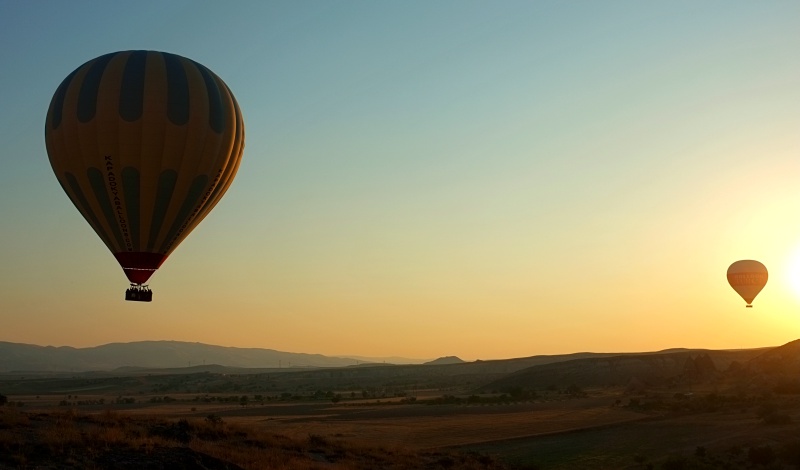 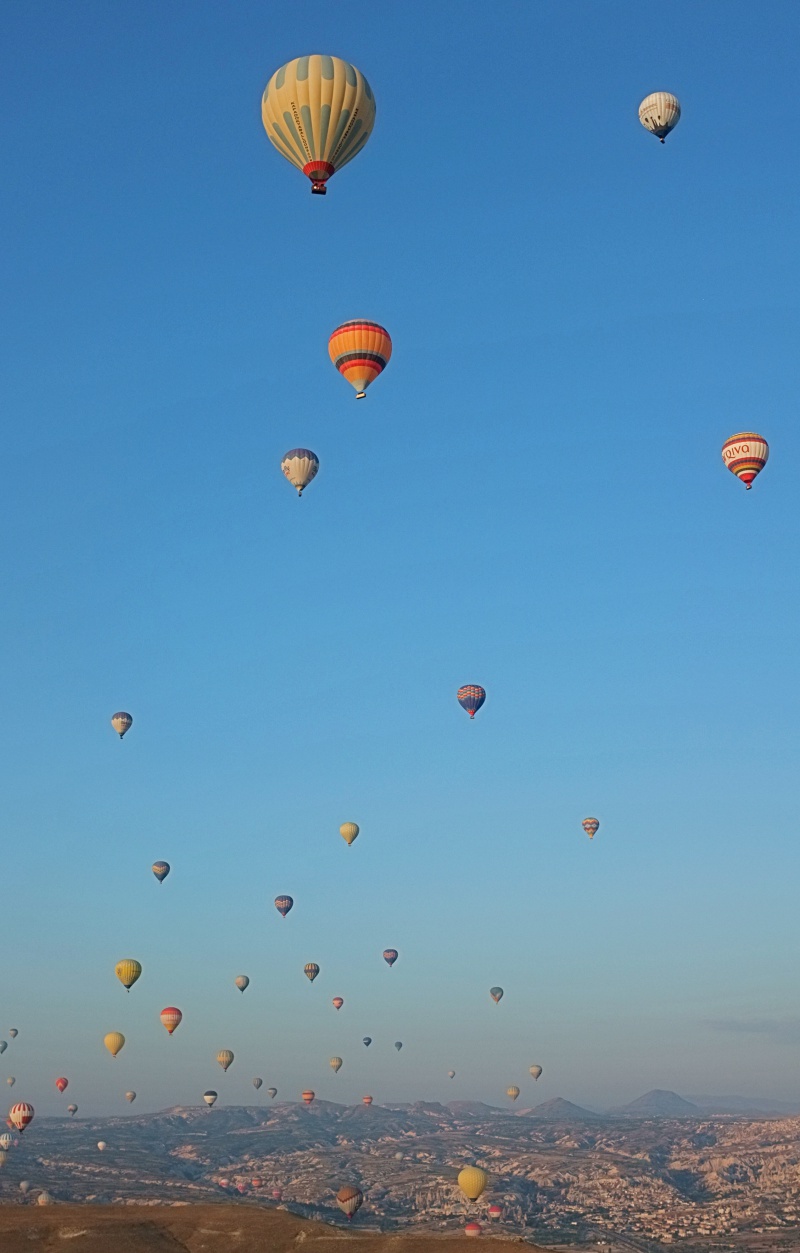 Totally mindblown with the scenery. 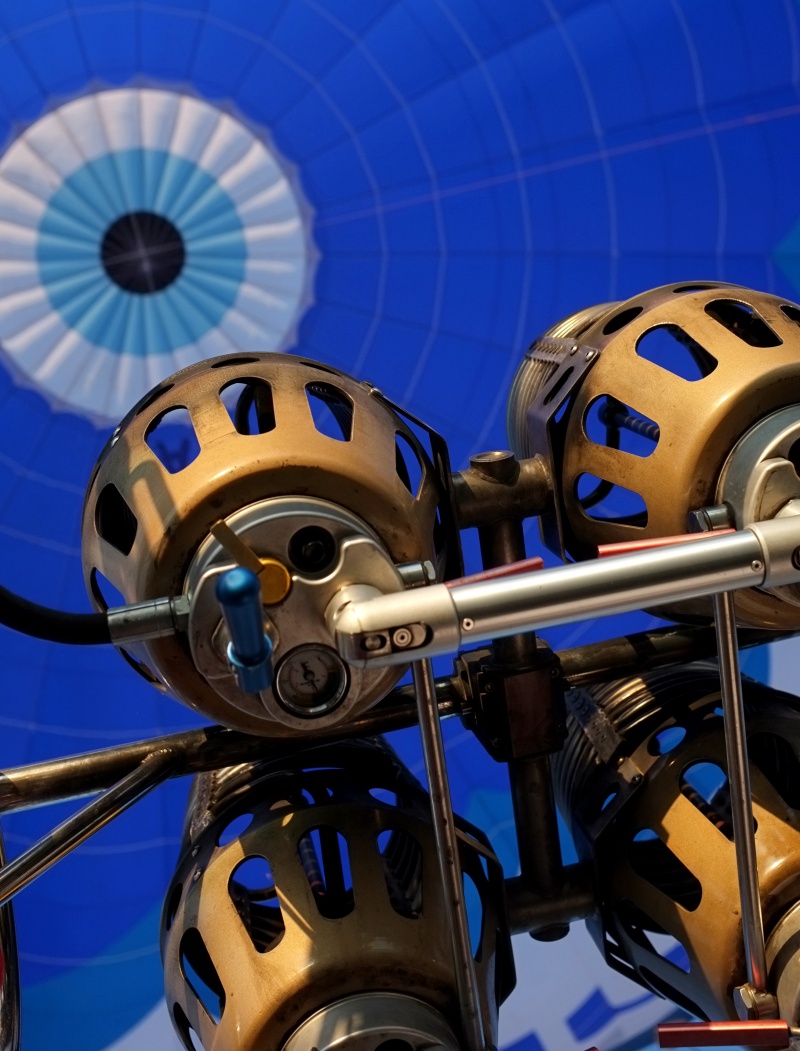 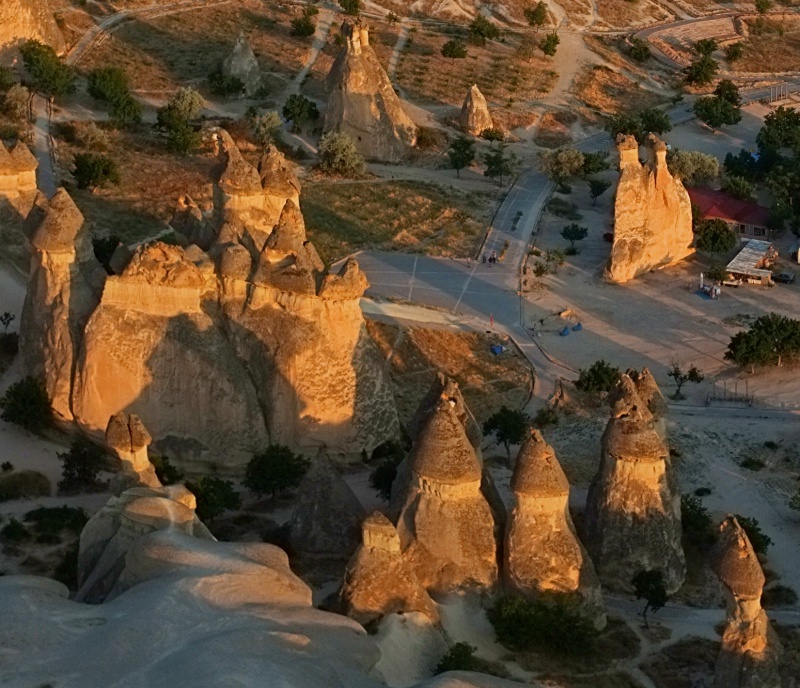 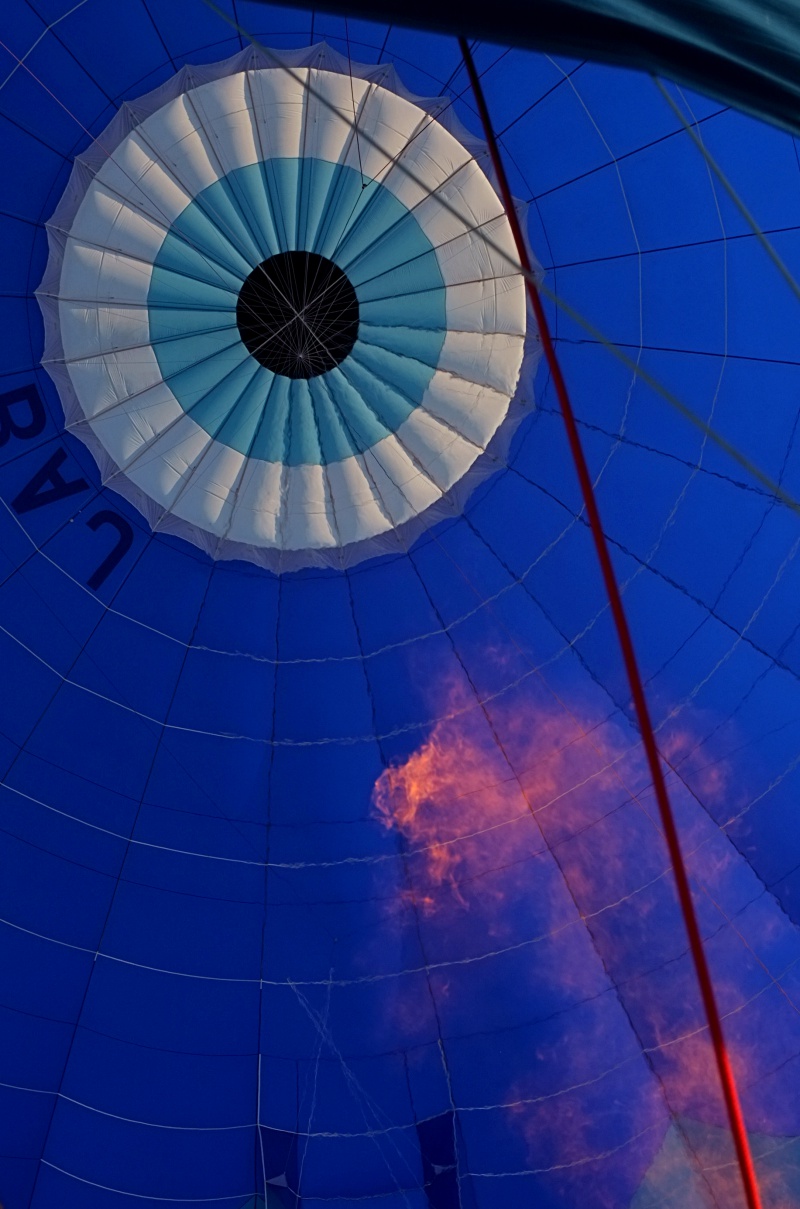 An hour of airborne later, we got ready for landing. I have to give credit to our pilot. He was extremely skillful, narrowly dodging cliffs and, get this, we landed RIGHT onto the trailer upon landing! That's some serious maneuvering there! 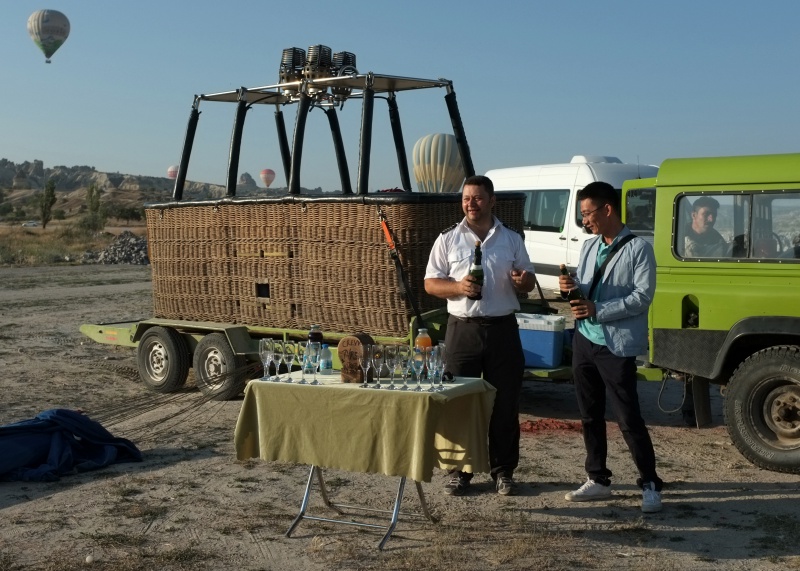 Breakfast champagne and snacks to celebrate our safe landing -- I suspect it was the champagne that eventually gave me a stomachache the whole evening... 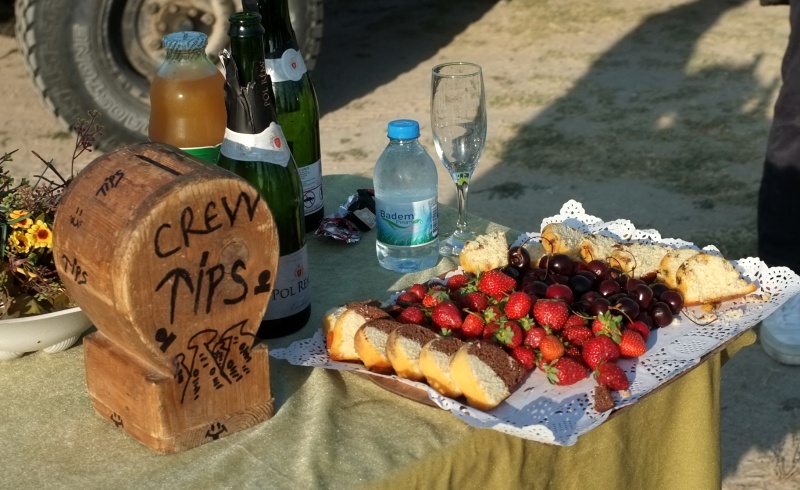 Even got a certificate from hitching a ride ;)

I got back to the hotel close to 8:30am, and crashed for an hour. In the midst of a stomach discomfort, we booked a day tour to visit the highlights of Kapadokya. My favourite was touring an underground city which was 7 levels below ground! The openings are narrow and can sometimes only fit one person, so people had to take turns going in and out!

It's like stepping into an air-conditioned room as soon as you enter the caves, a welcome respite from the heat. 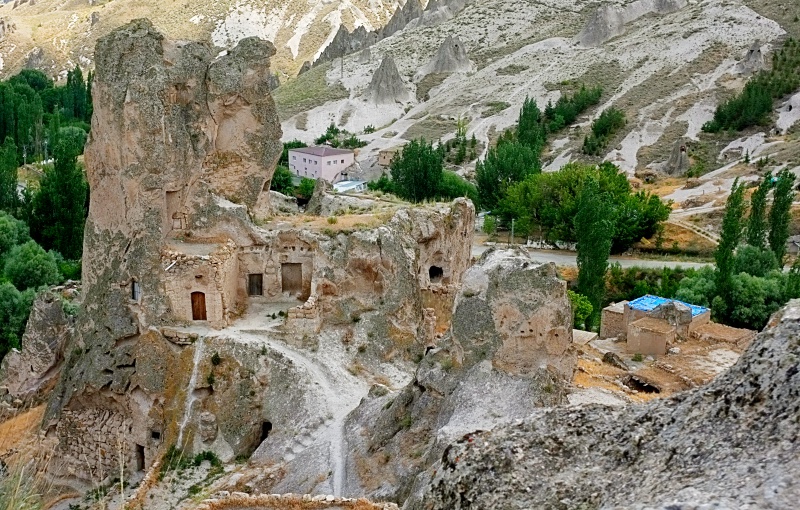 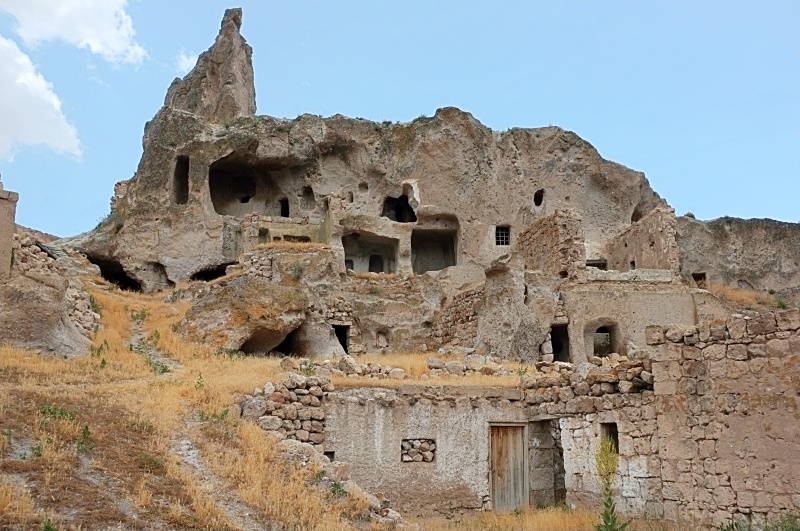 Stopped for lunch at this beautiful apple tree orchard: 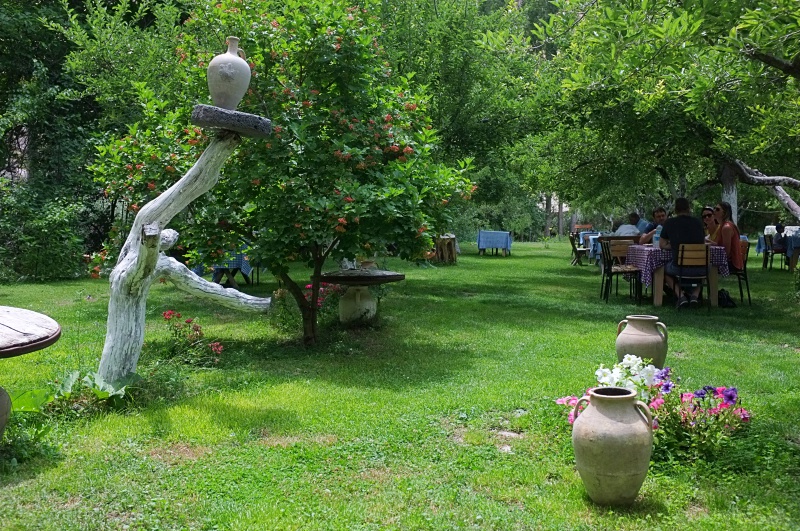 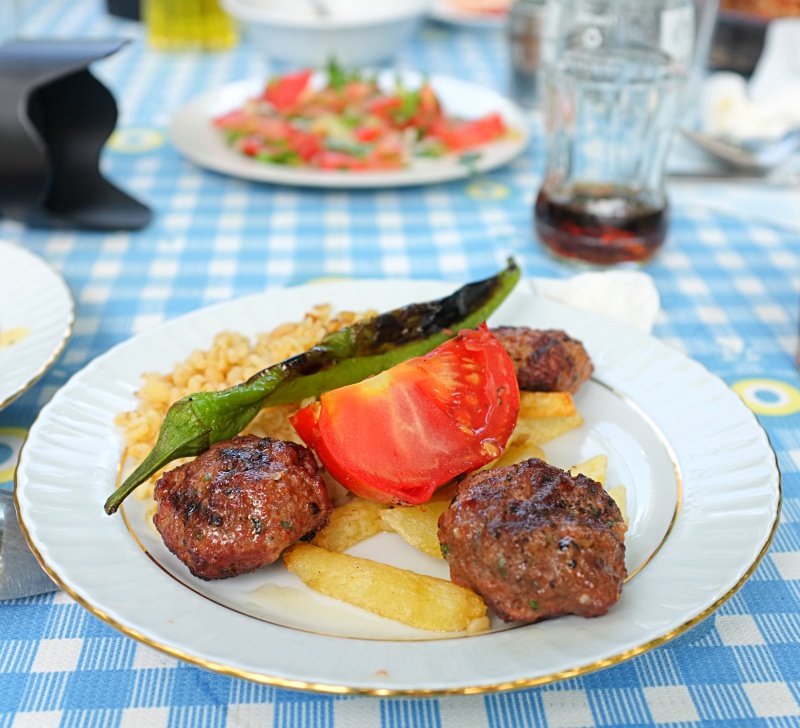 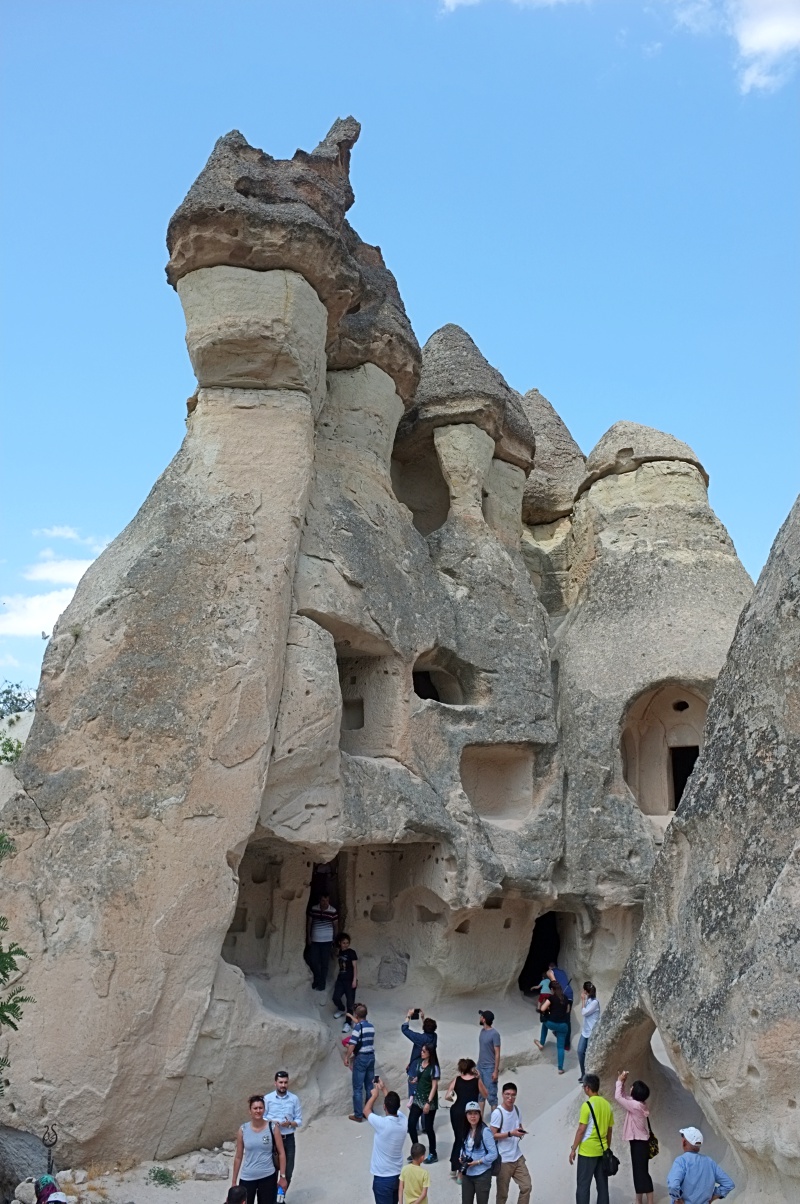 And that's the last of the Turkey series! Wish we could have explored more of Turkey but with the current circumstances, we were lucky to be able to fit a week in.