Macau: In A Day

Who'd ever think to explore a new country, all on a day trip?

I'm ashamed to admit, but that's what we did... Obviously there isn't enough time, especially if you got up at 10am, and then went on to queue for breakfast at the ADC instead of immediately proceeding to board the ferry to Macau.

And when I say "explore", I really meant "stuffing our faces".

Getting to Macau from Hong Kong

From Central MTR, go to the Hong Kong Macau ferry terminal. It was a bit tricky trying to locate the tickets office (even with the help of signs). You'll have to go up a few levels to find the counters.

Alternatively, it is possible also board the ferry from Kowloon in Tsim Sha Tsui. However,  the ferries leave every 30minutes, as opposed to the one from Central MTR - every 15 minutes. It does not sound like a large difference, but if tickets are sold out for the time slot you want, then the wait can be as arduous as 45mins-1 hour, just killing time at the ferry terminal!

The ferry ride takes about an hour, but also set aside some 15-20 minutes or so for tickets purchase and queueing at immigration.

Remember to bring along your passports!

We didn't need to exchange currency for the Macau Pataca.  The shops in Macau (both large and small establishments) are happy to take Hong Kong dollars because the rates are very close to the Pataca. Some places may also accept RMB.

We bought ferry tickets from Turbojet. At the boarding gate, seats were assigned based on a first come first served basis.

**On the return trip to Hong Kong (almost 10pm), tickets for the next two time slots were sold out. We found out some opportunist locals hoard the tickets, and then sell them at a slightly higher rate.

Free shuttle to the casino strip. At the Macau ferry terminal: simply ask the Information Centre after immigration for the free shuttle buses. There is a long row of buses that shuttle passengers to different casinos, for free. We took the one headed for The Venetian, becos all our food hunts are nestled here.

I think, for an eatery to be truly desirable and to create that viral longing - does not solely depend on its food. The vibe/ambience plays a huge part. This does not necessarily mean a fancy setting. It can be as memorable as a cafe by the beach, or even squatting by a large ditch and sucking on bloodied clams (you read that right... only in Malacca).

Which is why I usually steer away from eateries housed in malls. They lack any charisma, the experience is totally forgettable.

Those are precisely why our planned Macau food hunt failed. I was overly ambitious: I had initially arranged for the original Lord Stow's bakery in Coloane (south village of Macau), the pork chop bun shop called Tai Lei Loi Kei in Taipa village (western part of Macau), and then also wanted to see the Venetian.......

Instead of traveling all over Macau, we settled for their branches in the Venetian, heh. 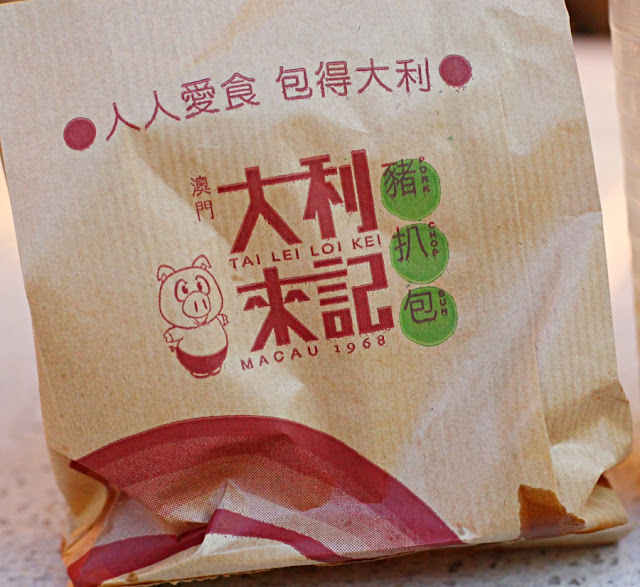 We thought we'd be one step ahead and order the pork chops WITH polo bao. Well, bad choice. The sweetness of the polo bao does not go well with the pork chops.

The pork chops, however, were really tender. One of the better pork chops I've had, for sure. 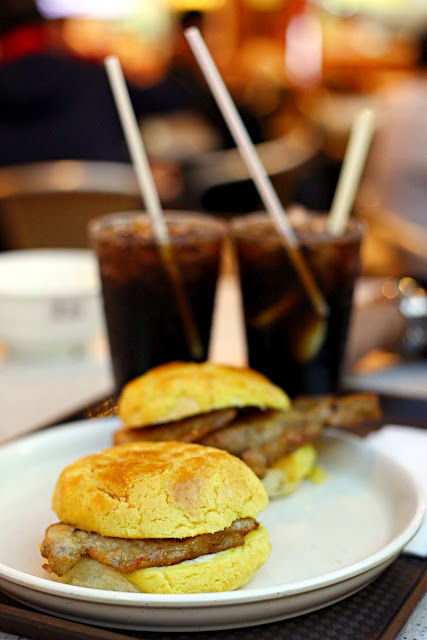 Now, THIS is the pork chop bun you want to have: 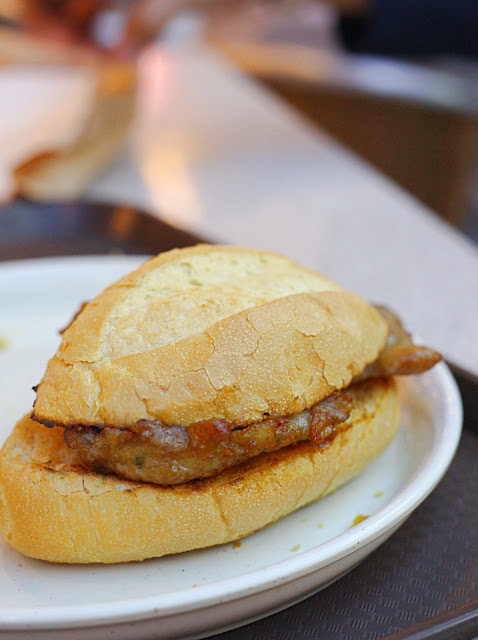 Vinnie went for a second serving, and opted instead for the pork chop bun (original). Sandwiched between mini baguette breads. It's the perfect marriage! The slightly chewy baguette goes wonderfully well with the pork chops.

Now, the moment we have all been waiting for. 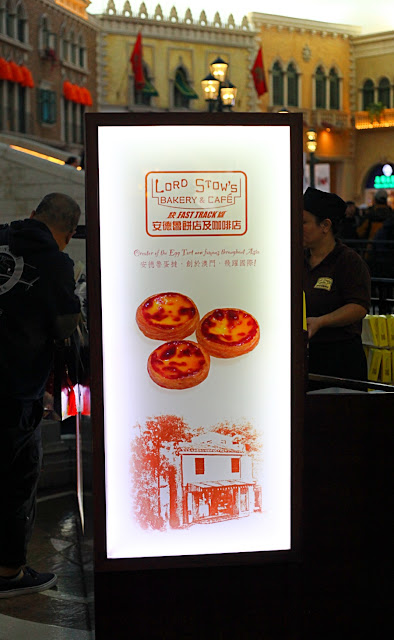 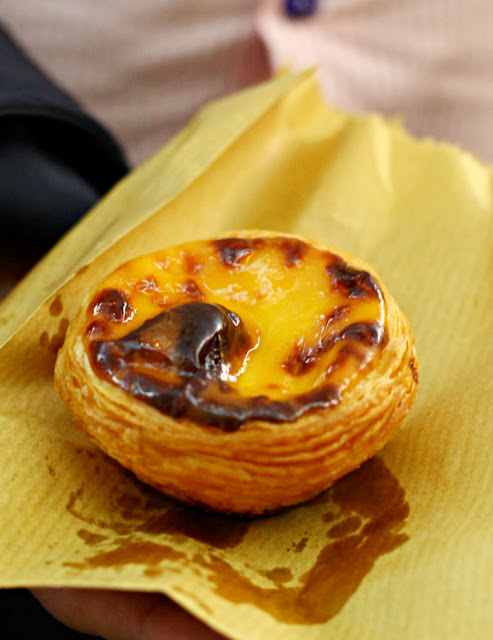 My expectations were high. I mean, these are supposed to be the best Portuguese egg tarts in Macau! Some say they are better than the egg tarts in Portugal!

They do not disappoint.

Oh my. The tarts are kept at a very warm temperature (50-60C?), and we struggle to hold and eat them! The flaky layers of puffed pastry make an orgasmic contrast with the soft egg custard filling. The custard is incredibly soft and gooey, they quiver at the slightest movement. 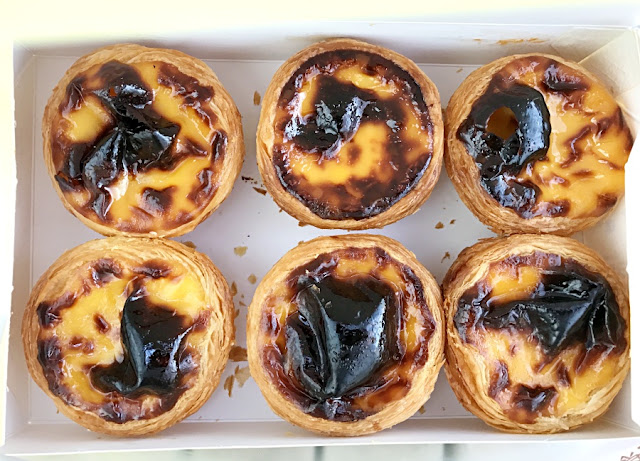 If you'd prefer to visit a proper Lord Stow Bakery (not in a mall), they also have one branch in Taipa Village.

The village is a real pleasure to take a walk in. Roads are small and totally pedestrian-friendly. Hardly any traffic, except for the occasional vehicle. 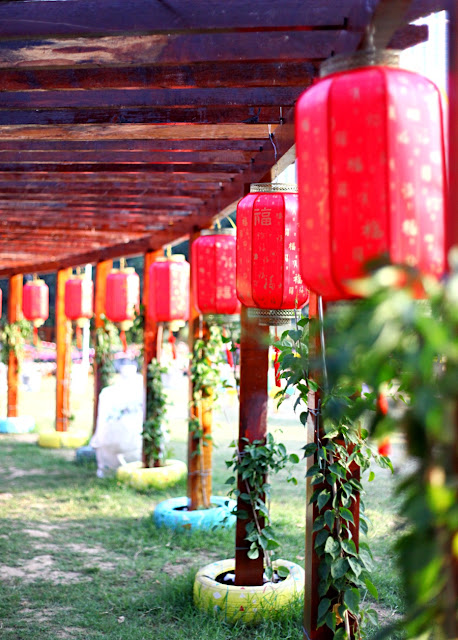 A park being dolled up for the upcoming Lunar New Year celebrations. 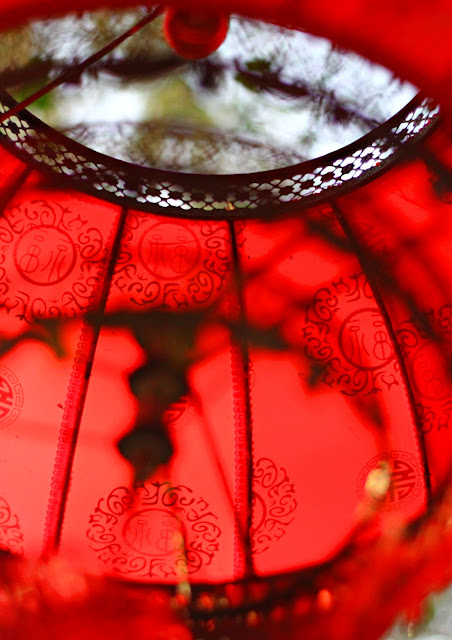 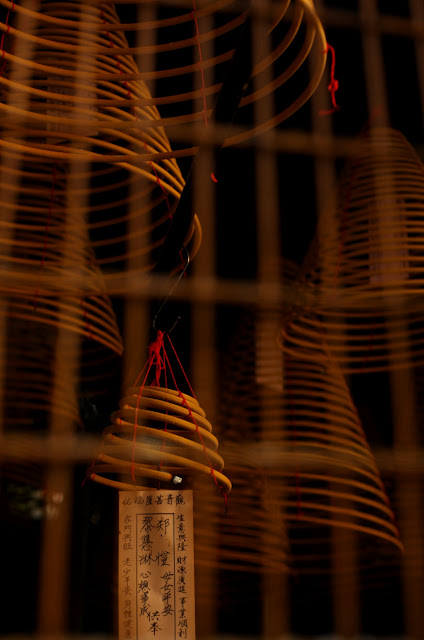 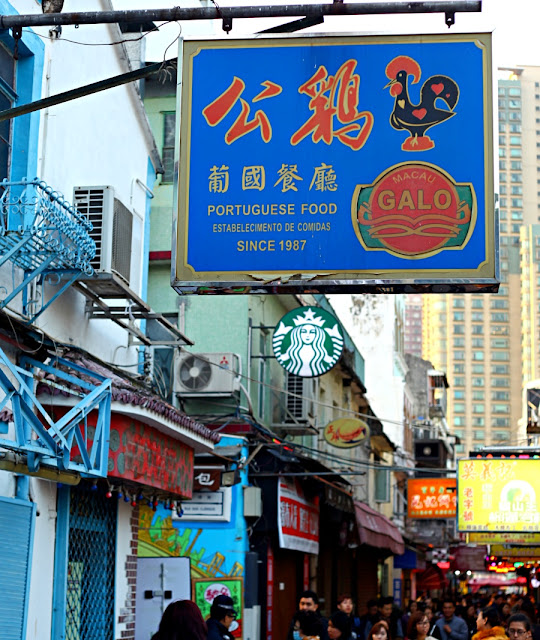 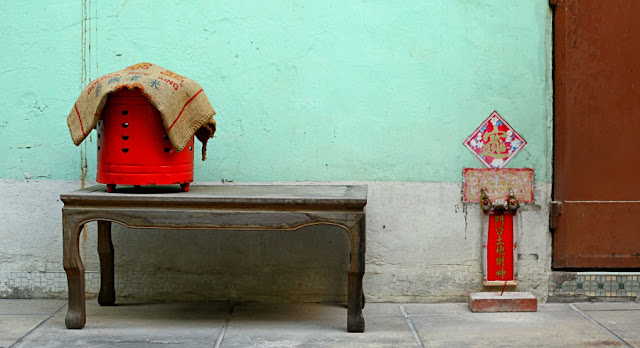 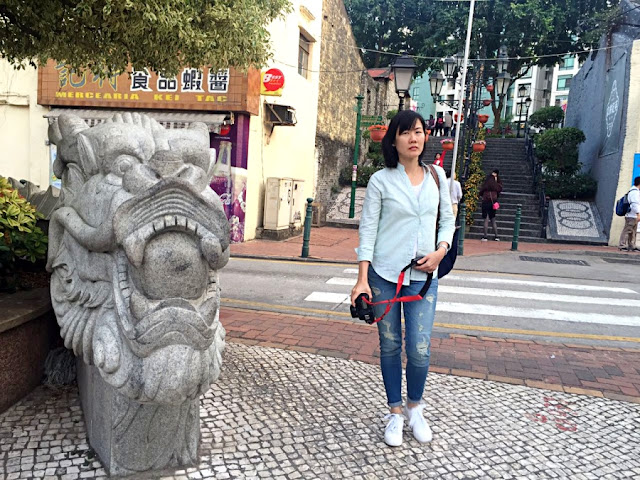 A bad-ass photo V took of me, heh.

And last (surely not least) on our Macau food hunt-

African chicken in Macau does strike as odd. But Macau was a Portuguese colony, along with parts of Africa. The African influence of spices, chilis and piri piris soon spread to Macau. We were told this African chicken goes through three types of preparation: roasting, deep-frying and grilling.

The chicken is slightly sweet to the palate, with a tomato paste, and piri piri sauce. And not remotely spicy. It is very tasty and I would highly recommend it. This does remind me of Mom's ayam ros from home. 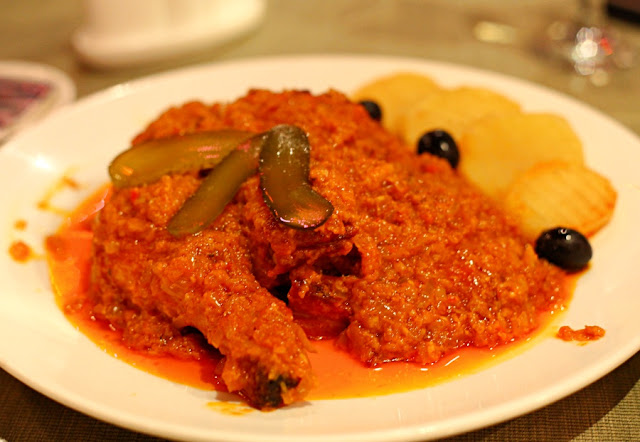 It's a damn shame we only have a day here, but we'll surely be back to explore Coloane and Senado Square. Plenty more to see and eat.

Posted by Su Yin at February 25, 2017
Email ThisBlogThis!Share to TwitterShare to FacebookShare to Pinterest
Labels: Around the world - Asia, Food-Oriental Oozes