Hong Kong: The Big Round Up

It is bustling, it is full of energy, it is efficient.... and it is a gastronomic heaven. I love the constant flurry of activity that surrounds the city. I love the diversity of the people here, and I love the city in winter. 15-18C. Think boots, chic coats and dapper jackets!

This is the round up of places we frequently go, (with some editions from the original list) and for good reasons (in no order of preference).

There are, however, no dim sum pick here. We've gone to a few highly rated dim sum restaurants, but have been underwhelmed all times. I'm still uncertain if that was because we  not know what to order, or Hong Kong dim sum isn't one of their stronger points...

This is easily our favourite and we would fly all the way to Hong Kong just so we can have this every meal, all day (ok, so I lied about the order of preference)... 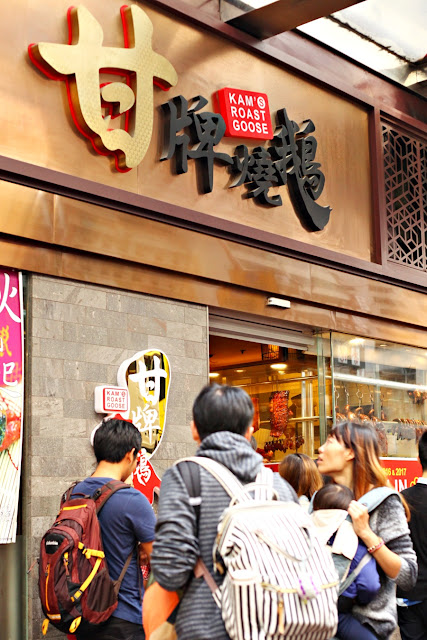 Queueing time for a table is 30-40 minutes - applies for most of the restaurants on this list here. Probably goes without saying.

We've tried numerous combinations on the menu: sausages, roast pork, roast goose.... and the choiciest item goes to the roast goose leg with rice, along with a plate of roast pork to share (if you're not too possessive).

Roast goose leg is charged at a slight premium, but it's totally worth it. More meat to bones ratio. Regular roast goose cut have lots of oddly-shaped and oddly-placed bones and it's just way too much work with chopsticks when all you want to do is gorge yourself silly. 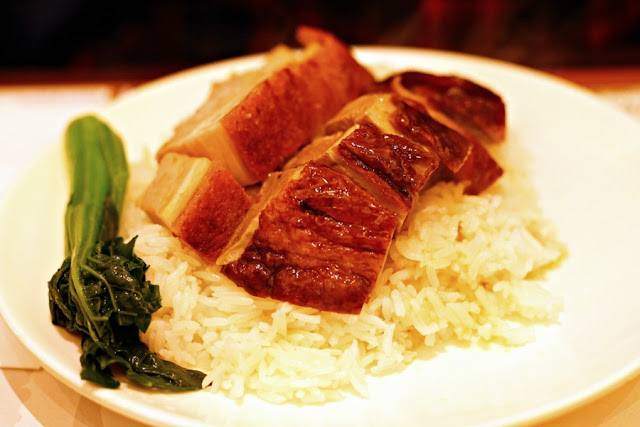 Ah... this photo is sending me happy, happy thoughts....

Oh, and don't be tempted to order the pork sausages - an absolute meh. Century eggs are decent, if you're into that kinda stuff (still a bit too alkaline to my liking - I think they're only acceptable in century porridge). 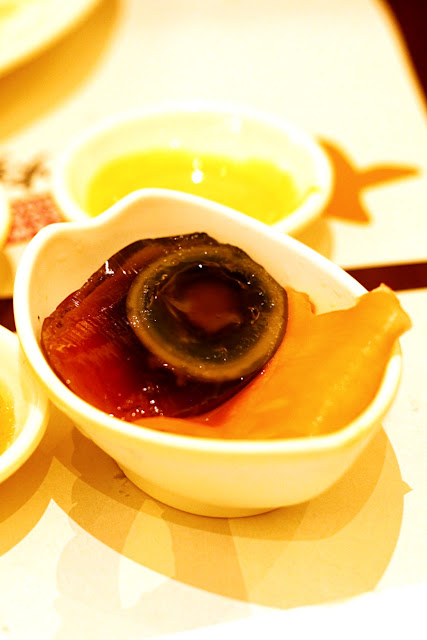 This is a new find for us - I was expecting the place to be a lot like Kam's, with practical seatings and attention on food. What we discovered in Little Bao was a pleasant surprise. Modern and youthful, with a gastropub vibe. The menu is a twist on old favourites.

We arrived at 8:30pm, but was asked to wait 40-50 minutes for seats. The eatery was chock full of people! We left our numbers and took to exploring the SoHo until we received a call from them. 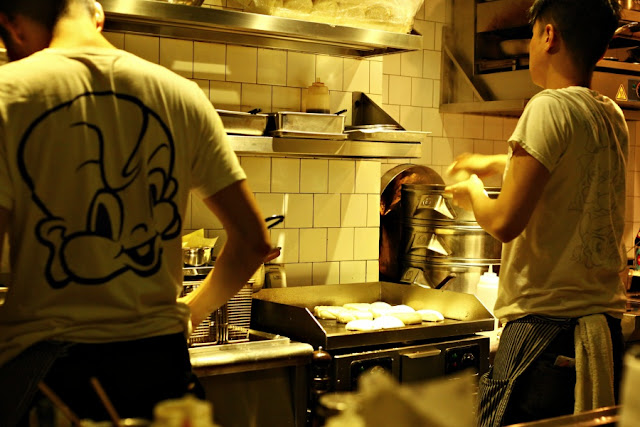 We got counter seats, yay. Service was prompt, but our orders took a while to arrive. 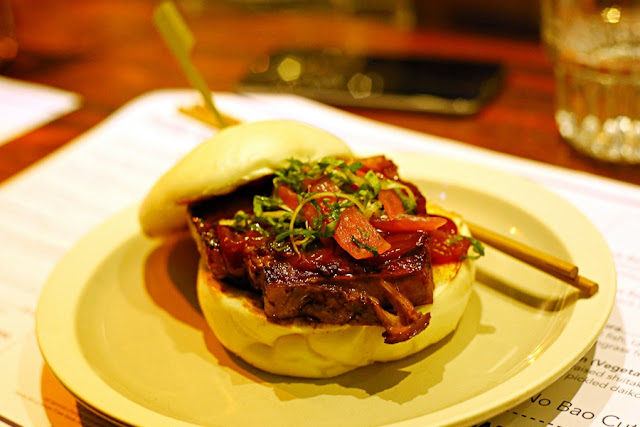 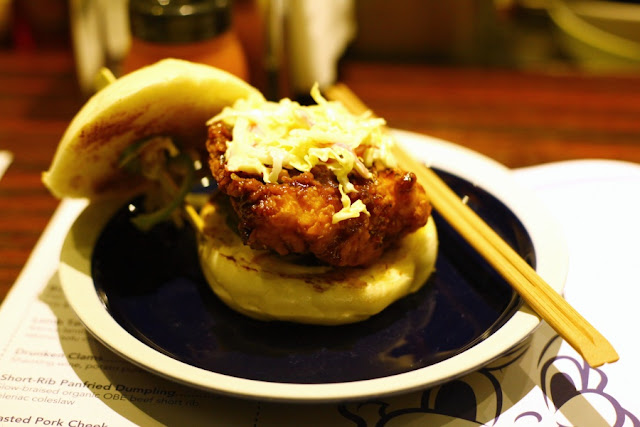 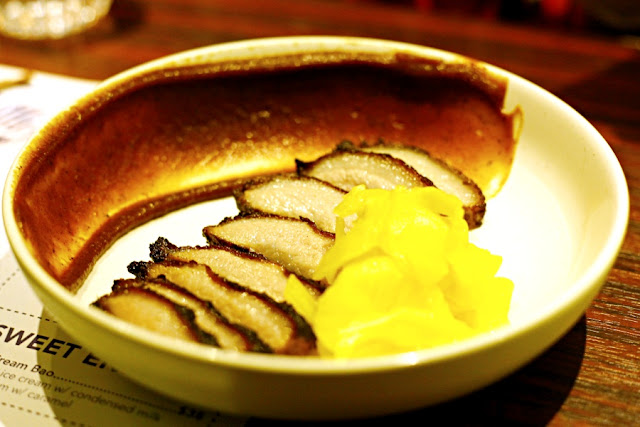 This. Is. Just. Orgasmic.


That first bite into a perfectly pan-fried crispy skin, followed by the tender meat and ended with an explosion of juicy layer of pork fat.


Kam Wah Cafe is unanimously voted as best place for Polo Bao, also called the pineapple bun. Despite its name, the bao does not contain pineapple. Instead, the criss-crossing design on top of the bun earned its moniker. 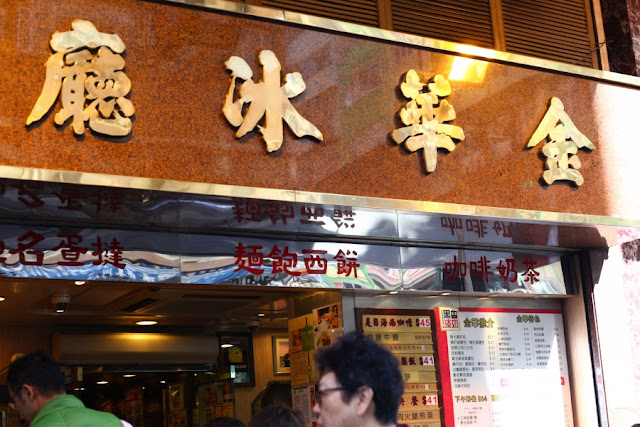 They have two shops side by side - we placed our order for 3 Polo Baos, one for me and two for V. Aaaaaand V had actually thought that the Polo Baos have some sort of filling inside (pork, no doubt) - so he was very disappointed to find out otherwise.

Me, I think they're really great, soft on the inside and decadent with butter; and the crust... oh my. They add a wonderful contrast to the spongy buns. Texture is sort of like crumble. They remind me of the char siew baos crust from Tim Ho Wan. 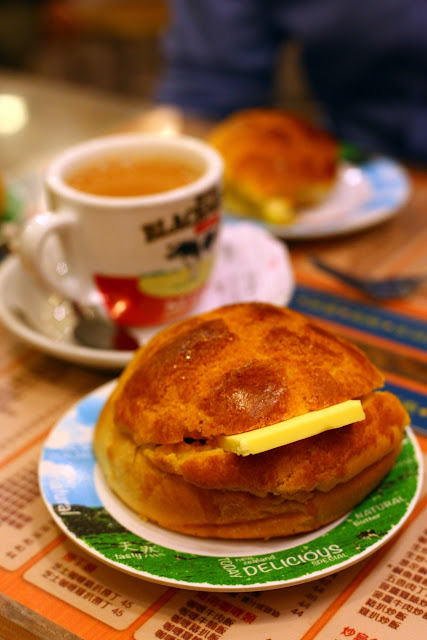 And washed down with the quintessential HongKi drink - yin yong.

Btw, this photo of butter sticking out of the polo bun looks almost indecent....

I have no idea how to pronounce or read this shop's name, but this search came up for a local eatery. 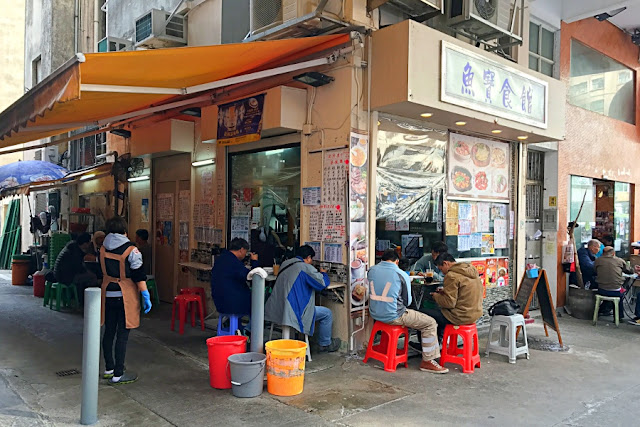 This was the store front of the address that I have in hand... but we can't be sure initially, as the addresses aren't clearly shown.

Still, the shop was almost full, that's surely a good sign as any. We signalled to the waitress, and she led us into ANOTHER eatery. 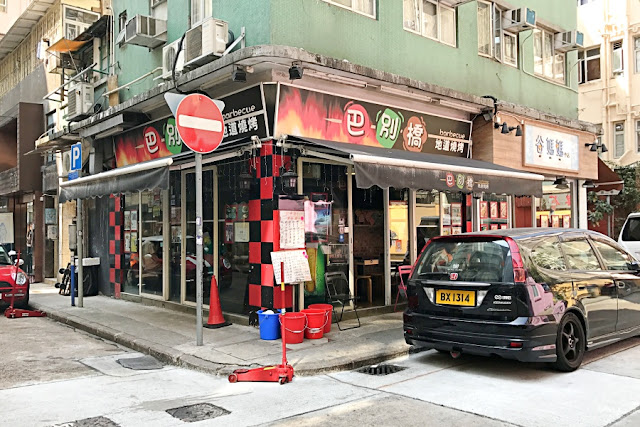 We suspected this second eatery, which looked more like a pub, is used during the day time to accommodate their growing customers.

The eatery is so local that there isn't an English menu.... and the servers only speak Cantonese. My Cantonese failed me here...... I wanted to order the highly recommended steamed minced pork with salted egg but for the life of me, I couldn't remember what "salted egg" is called in Cantonese! I should know this! Anyway, it is "ham dan"!!

Our server was very patient, though. She waited for me to struggle and sputter incomprehensible Cantonese. I tried to order a char siew dish with omelette - this wasn't so hard... cos char siew is universal ;) 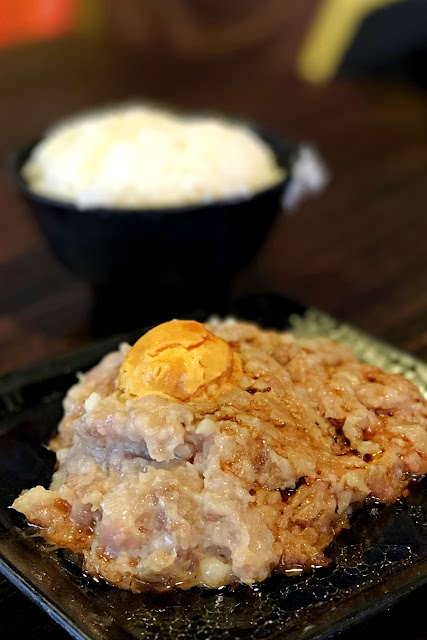 Steamed minced pork with salted egg yolk. Just a tad oily but this defines home-cooked comfort food! Simple and yet packed full with flavour. A bowl of rice is all that's needed to complete this divine image. 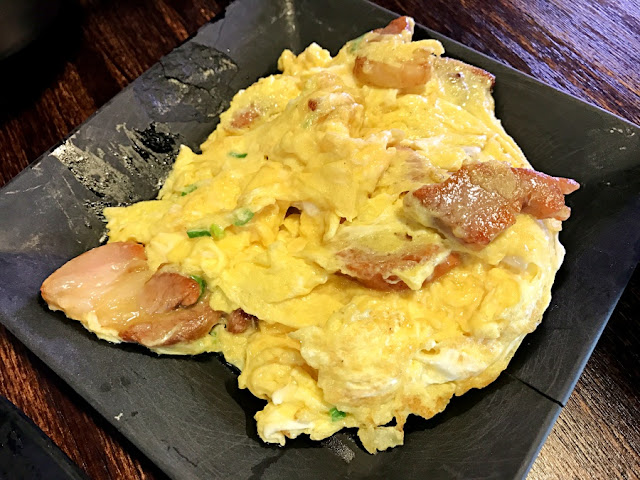 Char siew with omelette. This one didn't wow us so much. Interestingly the omelette and the steamed pork both have similar ingredients (pork and eggs), but very different preparations. 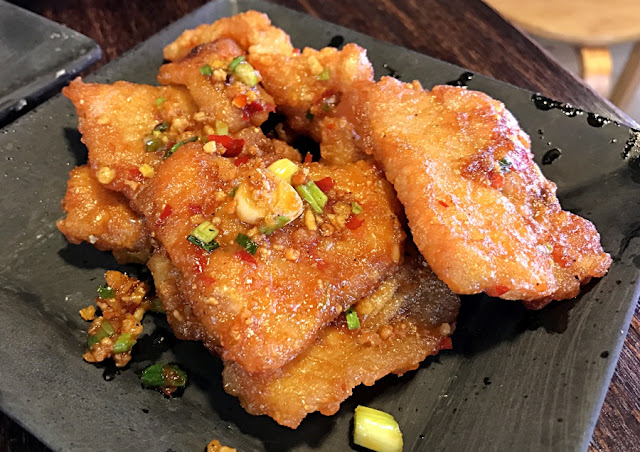 This is a spicy pork thingie that we spotted on another table and ordered, cos it looks good. We still don't know what it is called, hehe.


This needs no introduction. It's all over the Interwebz and appeared on every Hong Kong eating guide. 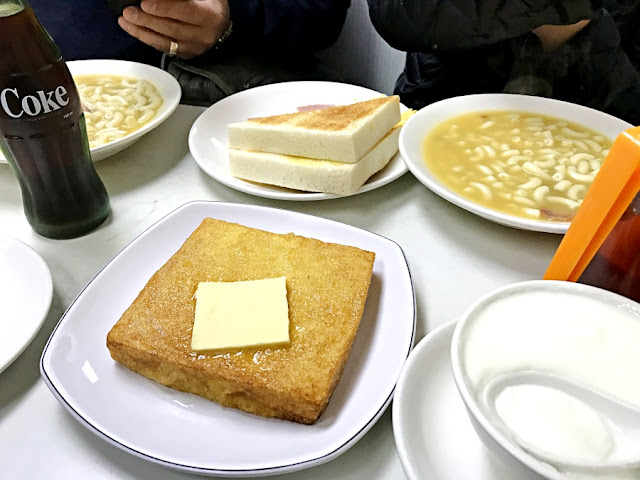 We paid homage to ADC every day when we were in Hong Kong. Incidentally, one of those times, we shared table with a Hong Konger whose father was a Malaysian. And there's definitely the Malaysian hospitality there cos she helped us to order some items and clarified a couple of misunderstandings with the impatient ADC staff ;) 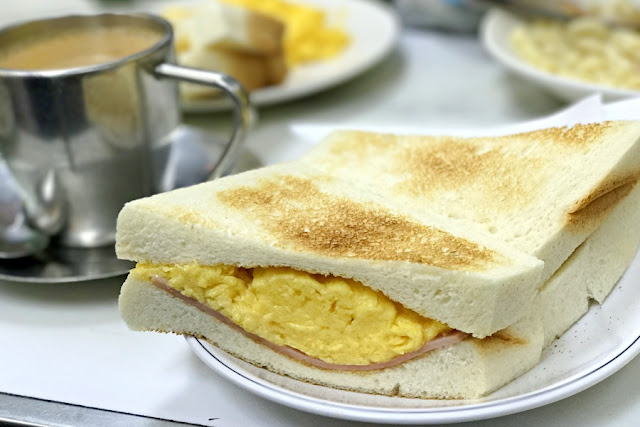 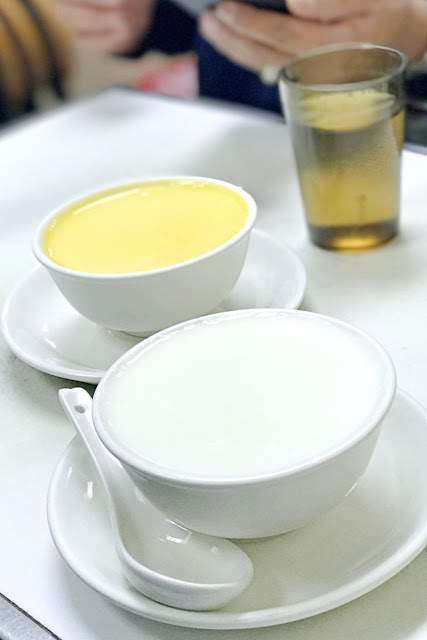 And you can't say you've been to ADC without trying their steamed milk pudding. Pick the one with egg whites, the almond steamed pudding did not catch our fancy. And choose warm cos the flavours are more defined when the pudding is warm! 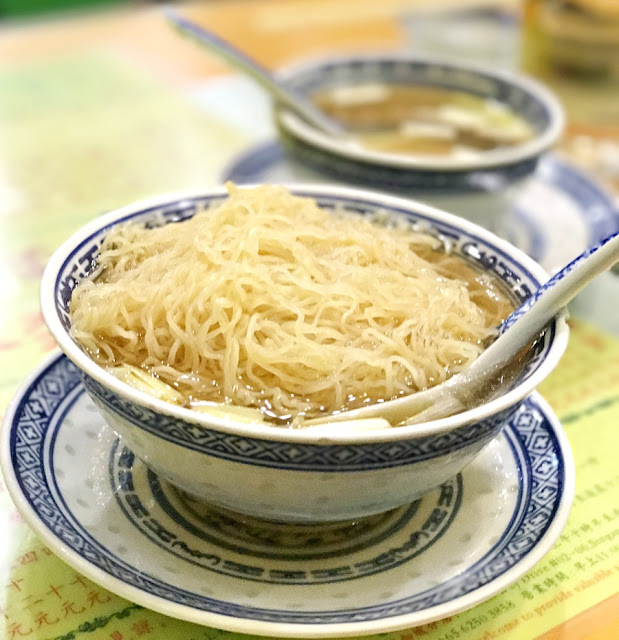 Mak's noodles eatery is just right next to the ADC. The noodles are the best I've ever had in my entire life. Light and springy, with a perfectly al dente texture. The soup and wantons are alright, though - so do manage your expectations.

Vinnie likes to order their dry noodles with spicy pork, which is really nice, if you're not into soupy noodles. Dry noodles come with a bowl of soup as well.