I can't honestly say I've always wanted to travel to Georgia, hehe - not that Georgia is short on breathtakingly beautiful destinations, mind you, but we've just been ignorant about this little-known country.

Why Georgia then? We were chatting about where we should head next for a holiday, and really just throwing out suggestions. Italy, Iran, Kazakhstan, Armenia, Georgia? - Oooh, hey. That resulted in frantic typing and googling. Our screens were filled with surreal photos of valleys, majestic snow-capped mountains and magnificent ruins. We ooh-ed and aah-ed, and by the end of it, totally convinced that we have been wanting to visit Georgia all our lives. We spent 2 weeks in Georgia (I had initially suggested a week each in Armenia and Georgia, but V insists that isn't enough time to explore Georgia). And to give credit to V, he has dedicated a significant chunk of his time to design our itinerary. We combed through websites after websites, got in touch with a Georgian guide and exchanged calls to fine tune our itinerary!

A few friends have asked to share our itinerary, so here goes:

I'll link them up once the posts are ready.


That's a tough question. There's no other country quite like it. Although it sits on West Asia, Georgia appears more European than Asian. An Orthodox Christian country, with motorists who drive possessed. We have met some truly welcoming and generous people in our trip. Always accommodating, always too much food on the table, genuinely friendly people who would have loved to chat with us, had there not been a language barrier.

The food is as complicated to describe: A hodgepodge of culture, not surprisingly, considering its geographical location on ancient crossroads of trading routes. Herbs and spices are used in excess for curing meats, flavouring stews and lending to a beautiful aroma and flavour. Bread is a staple, cha cha (vodka) or wine for breakfast is encouraged here.

Attire for women - it is best to dress conservatively. While there is that odd miniskirt or two, in general, the women are dressed modestly. I noticed the older women are dressed all in black, complete with a babushka (headscarf tied under the chin). When entering places of worship, it is necessary to cover your hair. Long skirts are permitted in churches, whereas pants are not. Fret not, there are wraparounds available at church entrances to cover yourself.

We felt very safe in the city, too. We chatted with our taxi driver, and he confirmed that crime rates are low. Police presence is strong in the city.

Now, I'm not an advocate of speedy tours around the city, but we were so excited to be in Georgia, we revved up and completed most sights of Tbilisi in a day. If you're short on time, it's manageable! Be warned, you'll have tired, jelly legs by the end of the day (which explains our relaxing and mostly chilling out the following day).

We stayed at Hotel Sololaki, an apartment unit turned into a hotel. The place was humongous, complete with a sitting area, a hallway leading to wardrobe and a balcony. We were warmly greeted with homemade Georgian wine.

Our walk started from Freedom Square (a mere 100m from where we stayed), and from there we made our way towards the Old Town, stopping for breakfast of kachapuri (baked dough with cheese filling) in between. 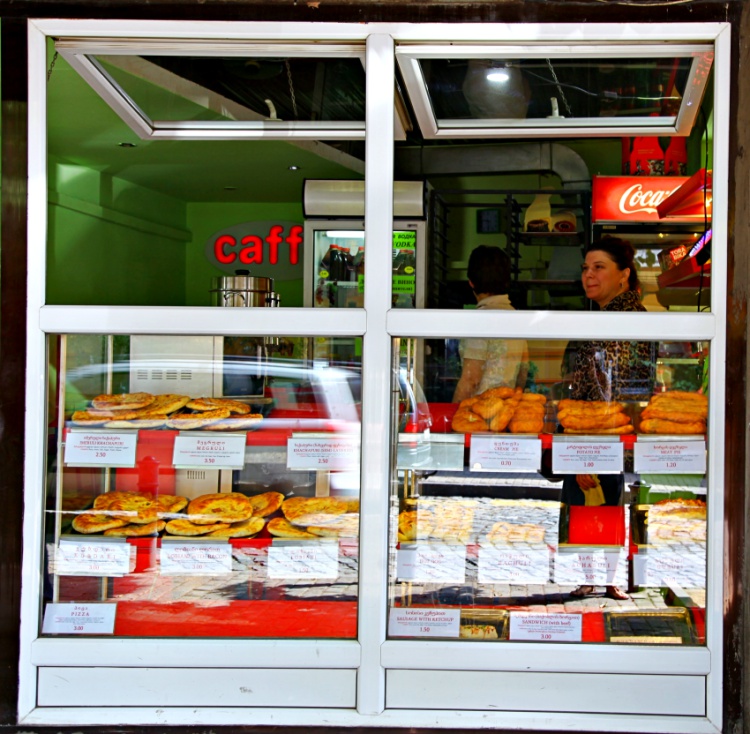 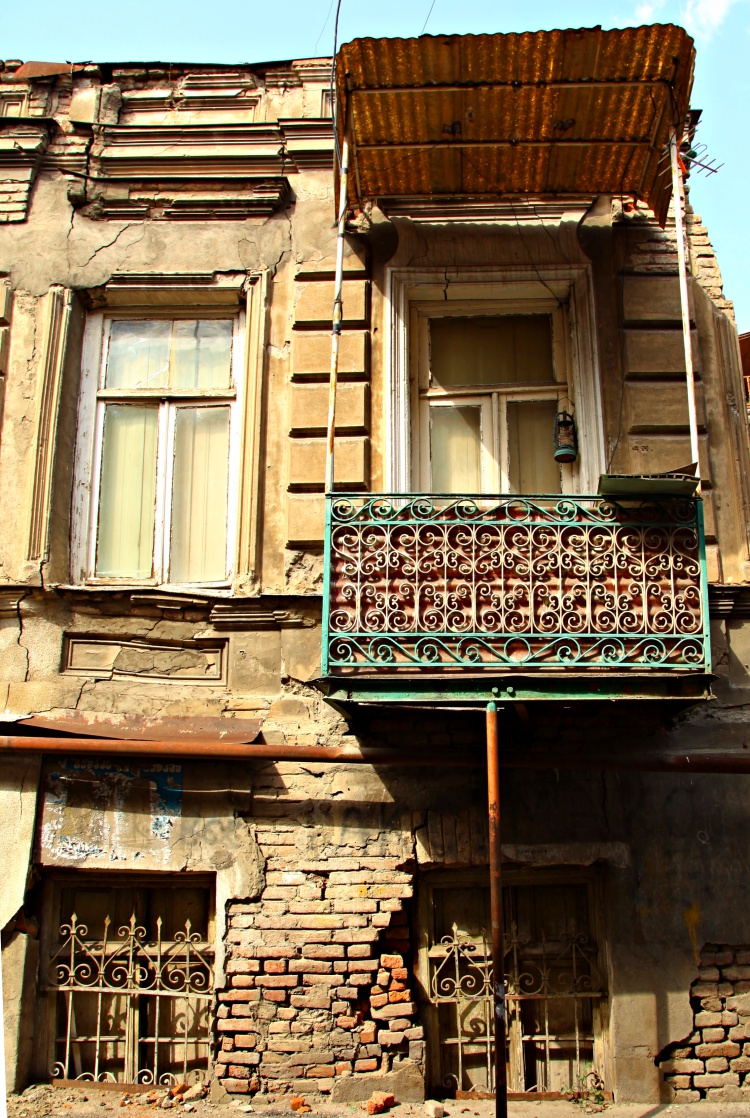 In addition to bakeries, churches are also found in abundance throughout the country. Georgia is the second country to formally adopt Christianity in the 5th century. 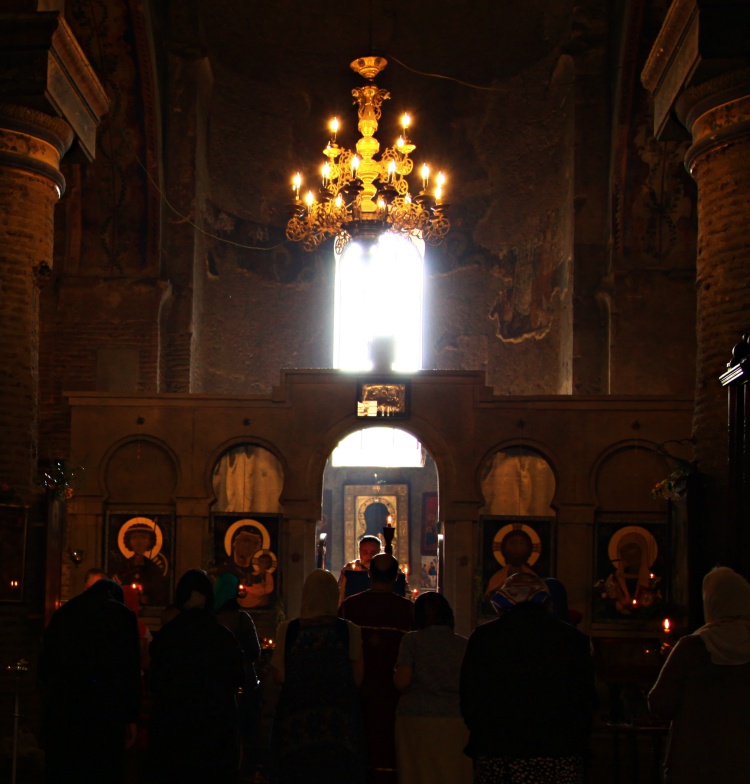 Inside one of the oldest church in Tbilisi, the Anchiskhati Basilica.

A Tbilisi fact - in 1795, the Persians invaded Tbilisi and had the entire city burnt. Sadly, most of the city is gone with some salvaged remains. 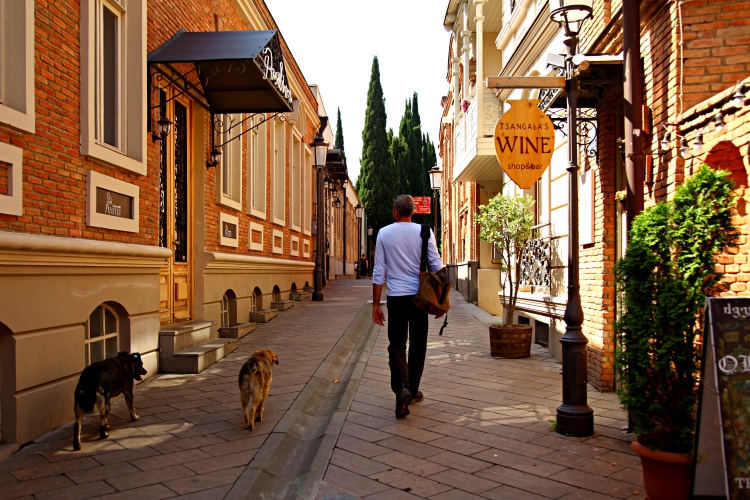 V managed to make some friends, surprise, surprise! Throughout Georgia, he's been exceedingly popular with numerous dogs and even horses. I blame his perfume, they were probably similar to doggie pheromones. 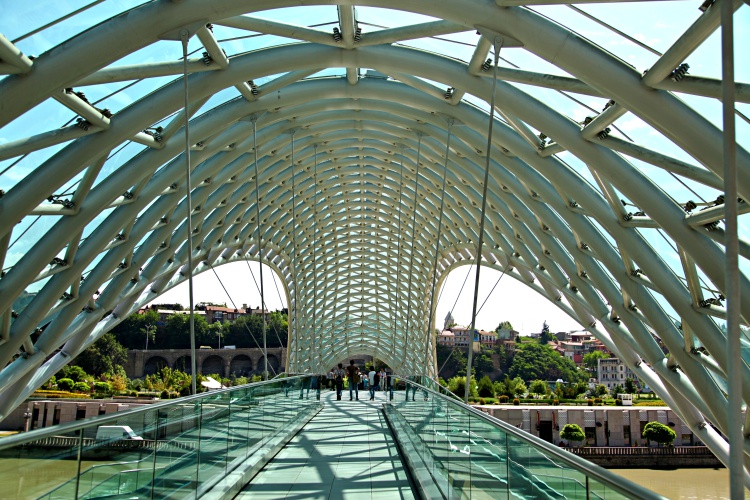 The Peace bridge, a modern addition over Mtkvari river, all glass and steel structure. 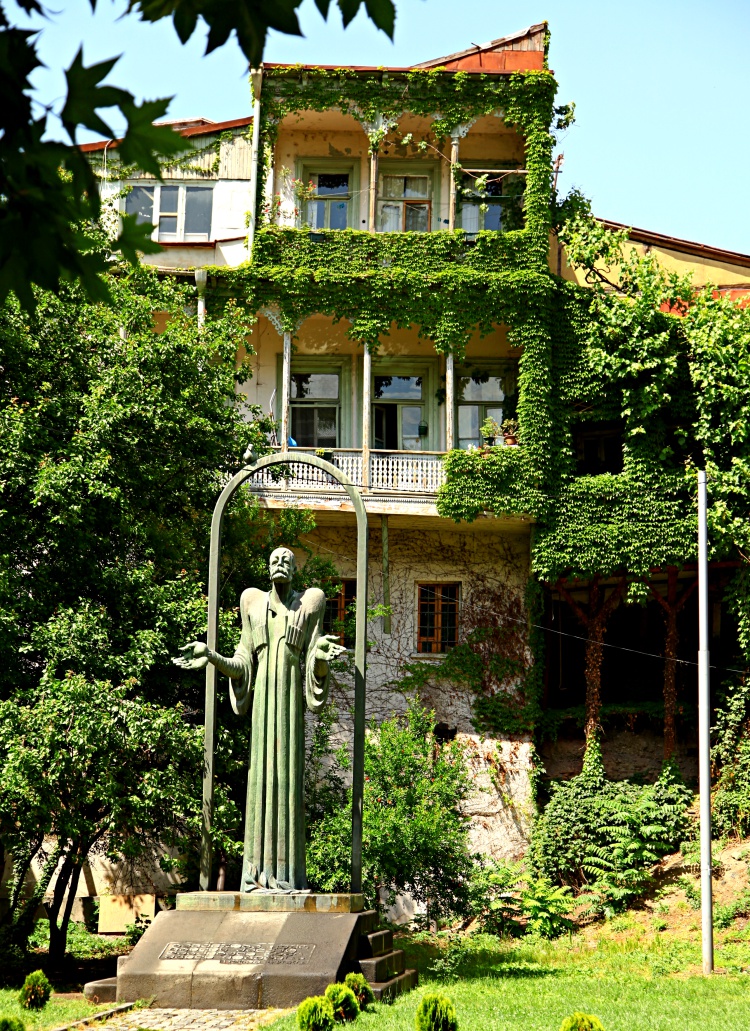 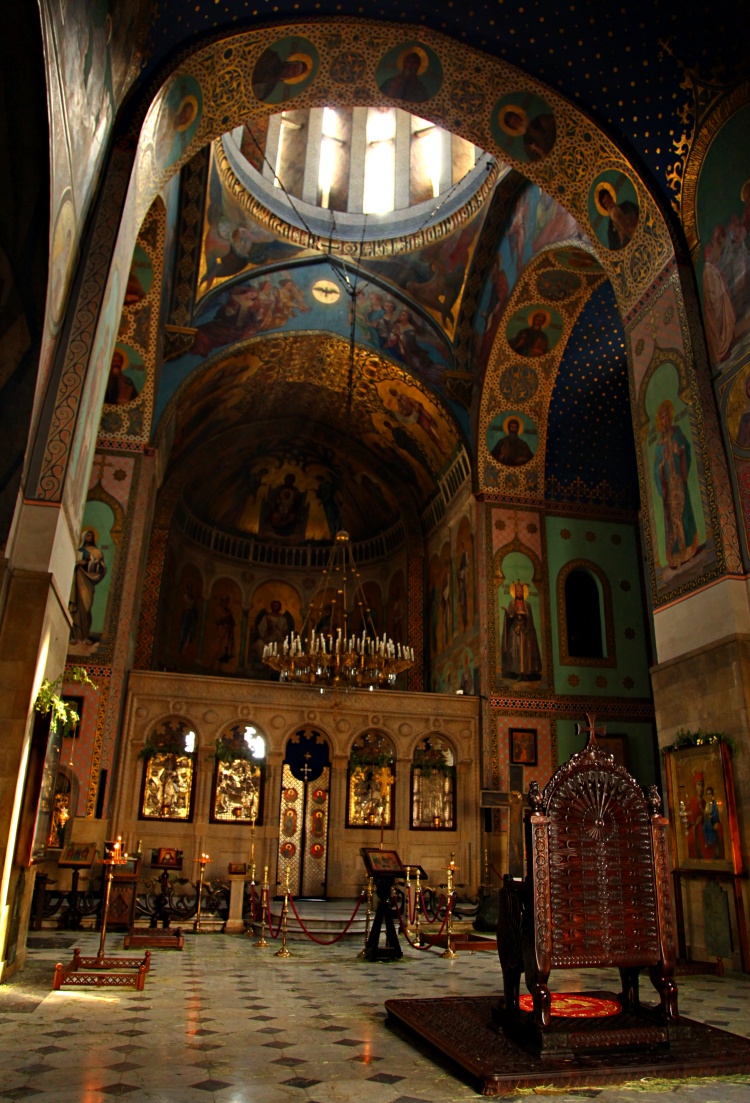 Sioni Cathedral, home to the sacred cross of St Nino 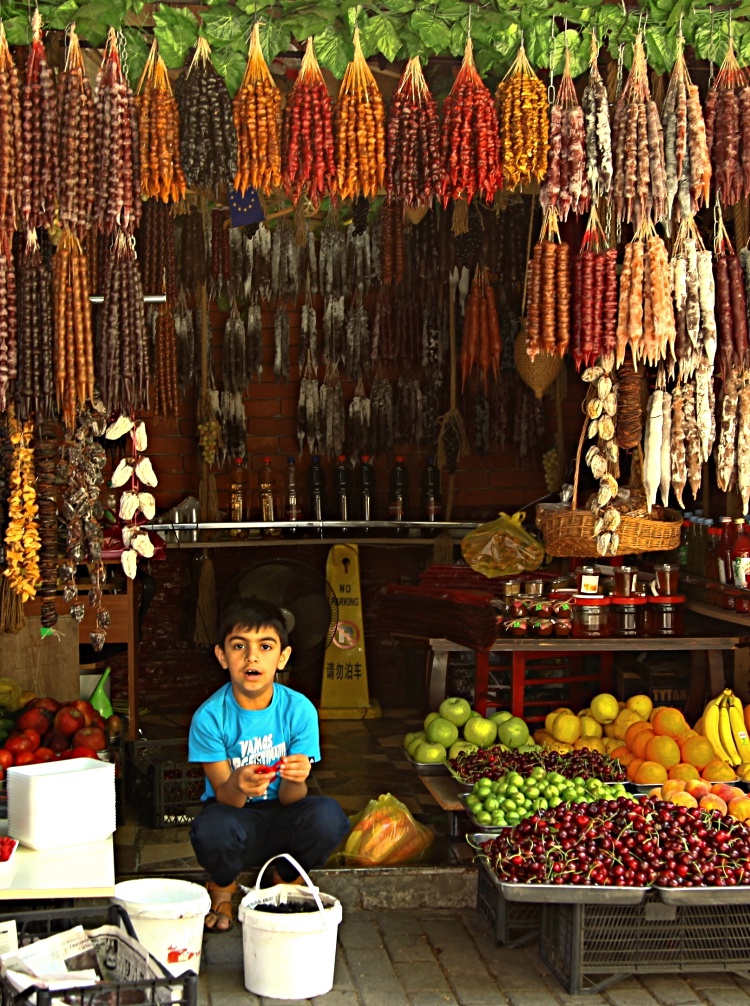 Those knobbly things hanging from top of shop - they look deceivingly like sausages, but they are not. Churchkelas are walnuts coated in layers of thick grape juice, dried out and sold as snacks. 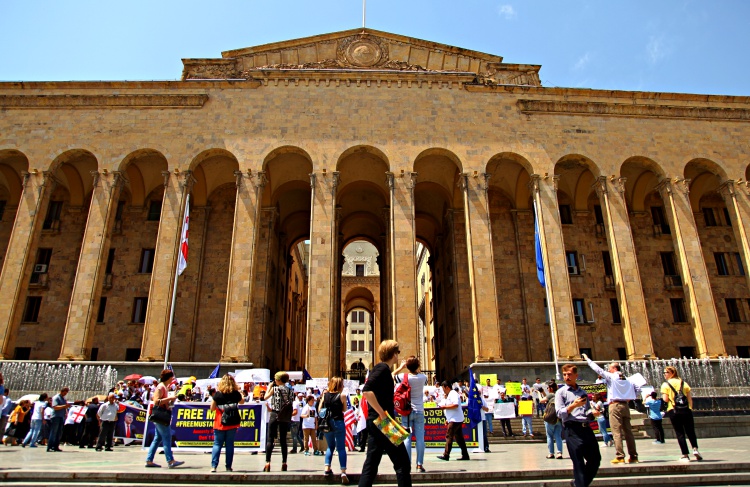 Outside the Parliament along Rustaveli Avenue, a protest was taking place to free a Georgian teacher, Mustafa Emre Cabuk, who was captured by the Turkish government although he was innocent.

Even here, a local took time to explain to us what the protest was about! 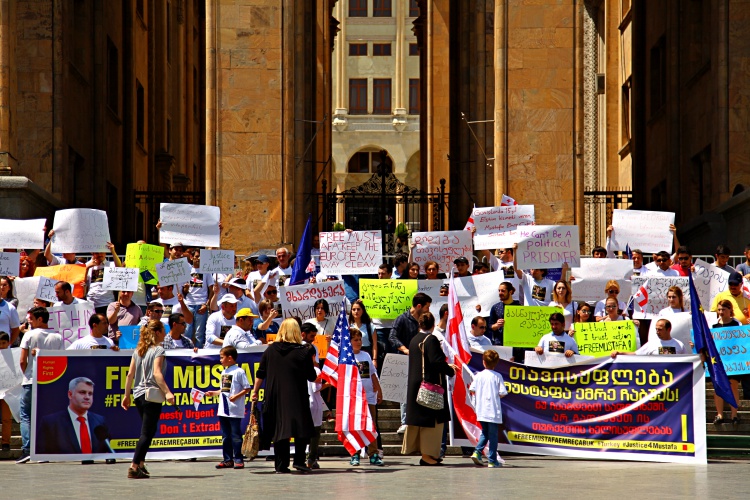 We used the metro to get around Tbilisi - each MetroMoney card is 2 GEL, and can be shared between a few people. What boggled me was how deep the subway was! I swear, judging by the depth and speed we were traveling down the escalator, the metro must be at least 8 or 9 storeys below ground.

Ok, that just prompted me to do a quick search: The Tbilisi metro station opened in 1966, is 60m underground and the escalators are 120m in length! 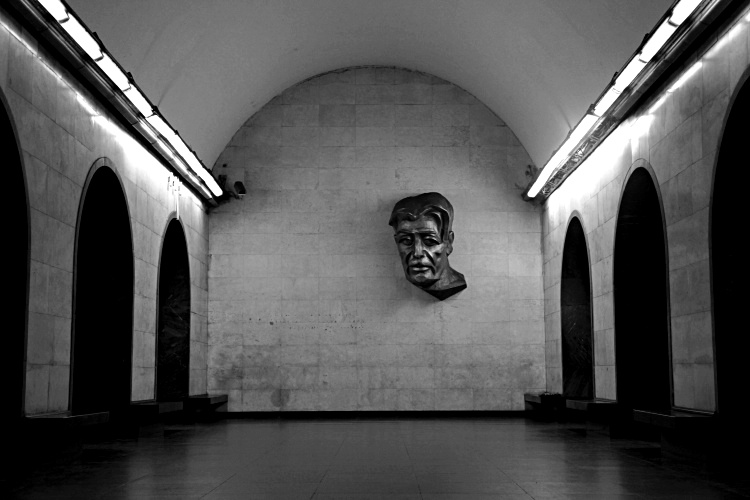 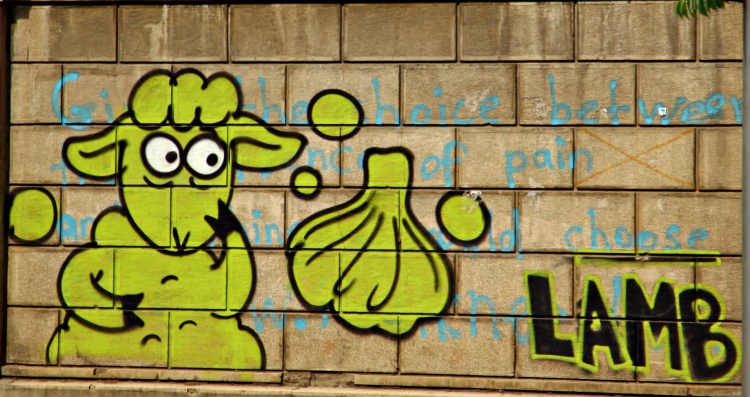 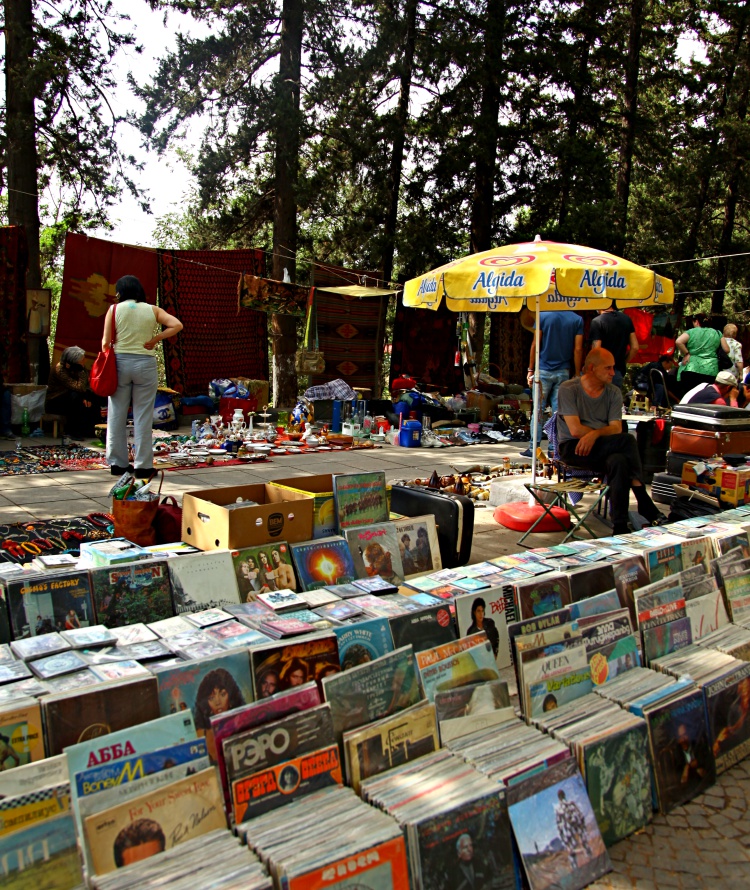 ... where I got a couple of Pirosmani-esque paintings on a wooden board, perfect for the kitchen!


Georgian books, remnants of Soviet era knick-knacks, drinking horns, paintings, and all manner of souvenirs can be found here. I'm not sure about haggling, but the painting that I bought were discounted because I purchased two of them. And besides, they weren't atrociously priced. 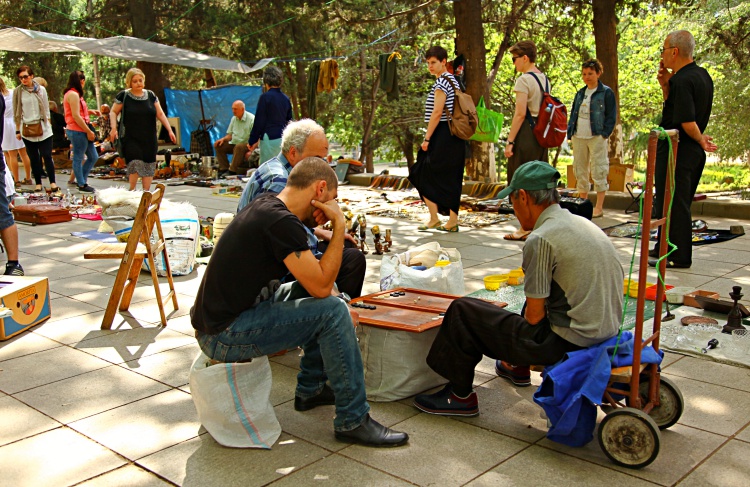 I love browsing through markets, both the dry and wet variety. In a wet market, the produce are in beautiful, vibrant colours which I love to photograph (V can vouch for that), while in a flea market, there's so much to see and a great chance to interact with the locals.

Between 2-3pm, it got increasingly warm, so we popped into the National Museum. We spent a good couple of hours there, poring over a whole floor documenting the Soviet Union rule.

By the time we were done, we were keen to photograph sunset over Tbilisi. We walked towards Tromba monastery, when a passer by warned us about vicious dogs in the area, and offered to drive us up towards the monastery. V was shrewd enough to reckon he was doing us in, and we politely declined his offer.

No dogs were seen along the way, although we do have to do a bit of trespassing and climbing over ledges, hehe.

The reward is great - 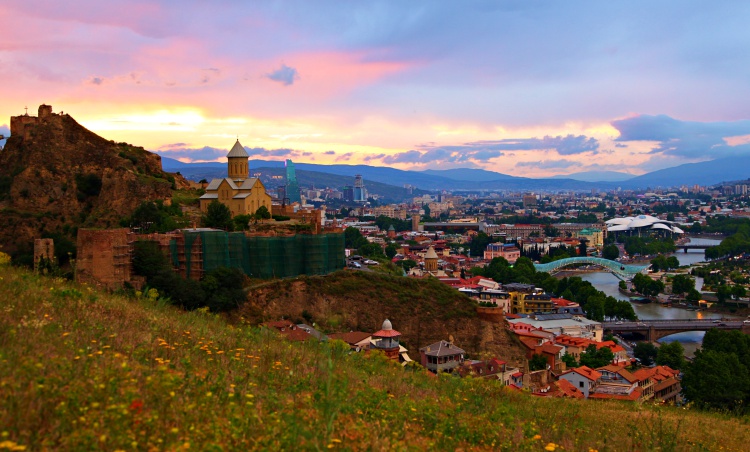 By dusk, the city lights turn on and transformed the city once again. 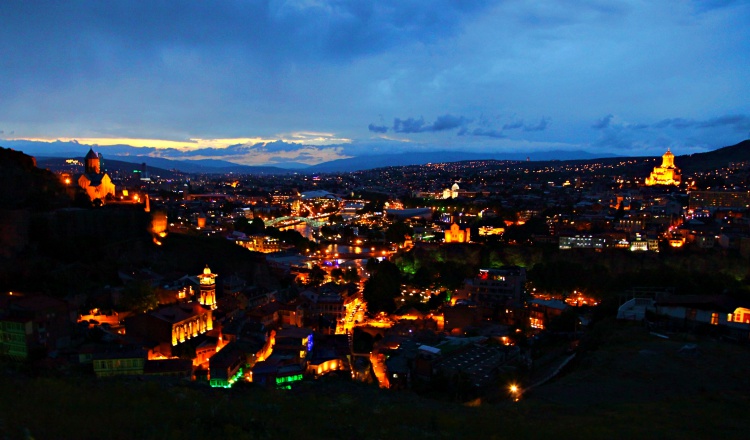 Photo is not crisp - did not have a tripod at this stage. 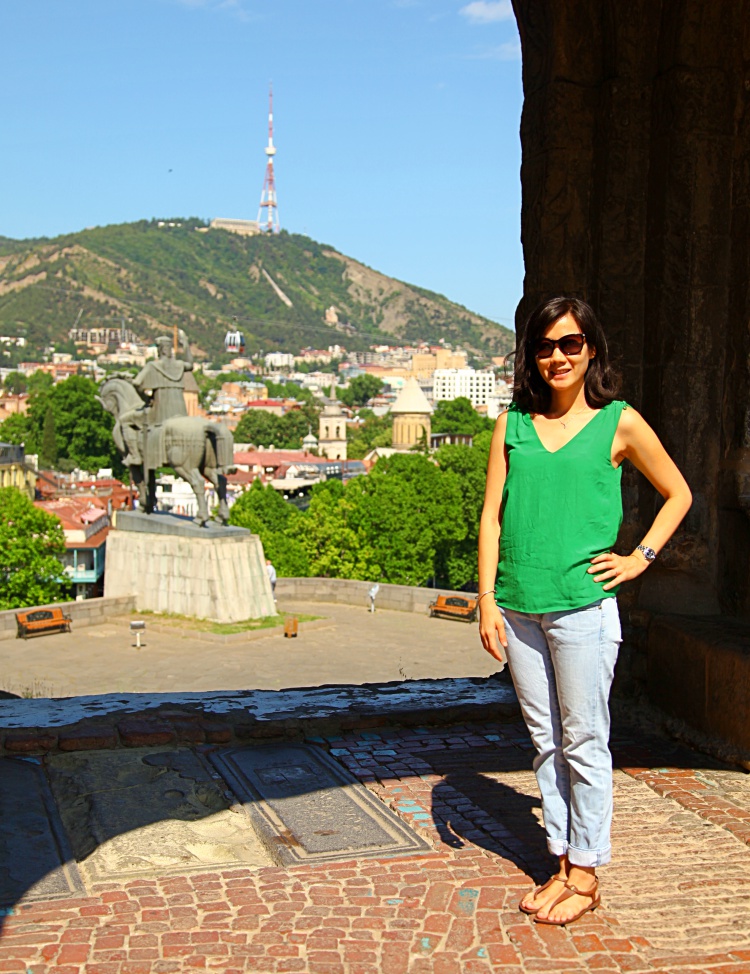 Probably the only photo of myself in this trip! 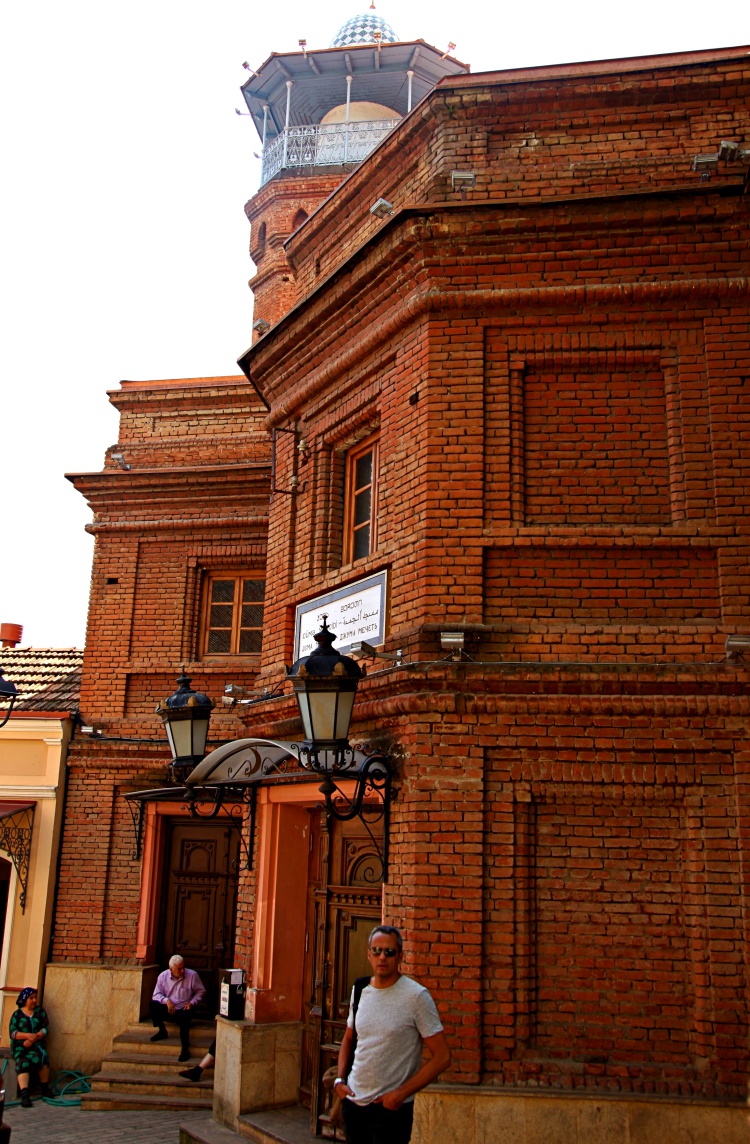 A mosque in Tbilisi, with a synagogue, and a church within close distance to each other. 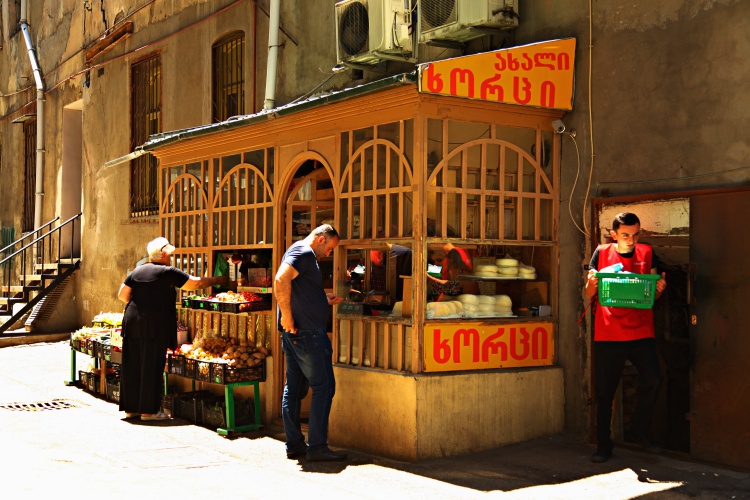 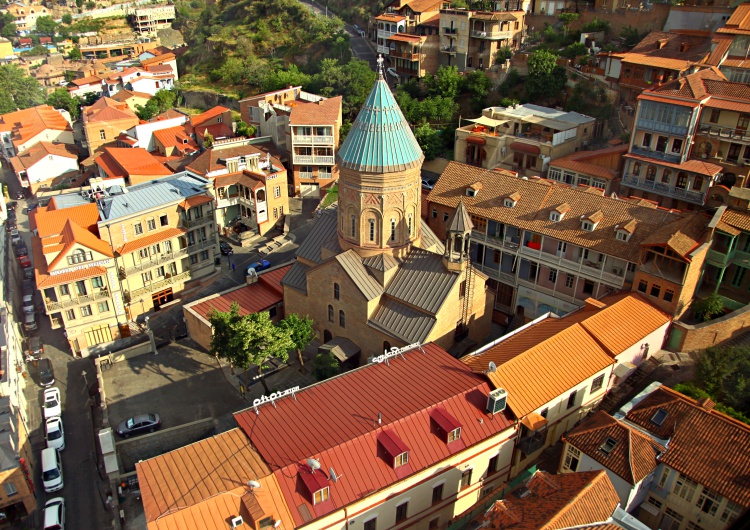 Cable car towards the Mother of Georgia and Narikala Fortress. 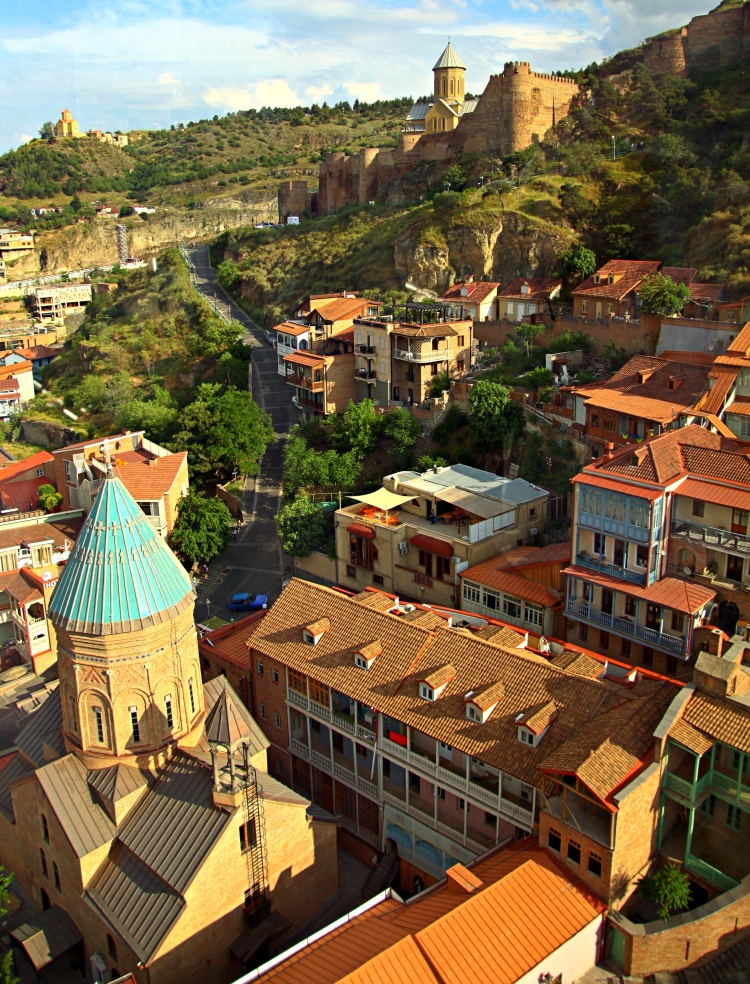 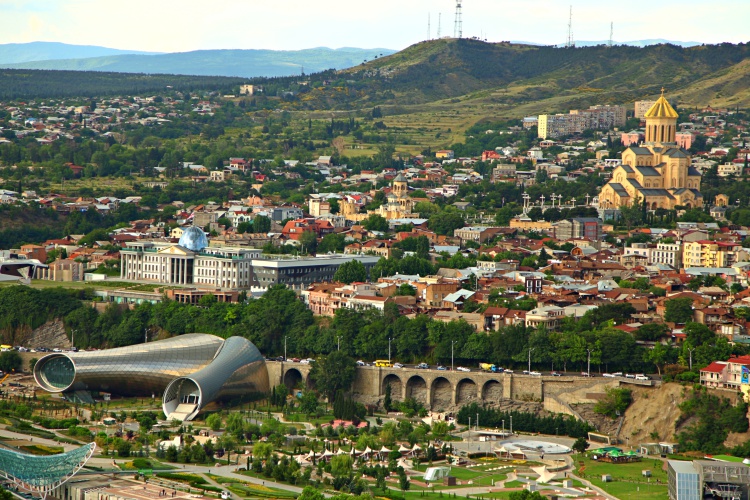 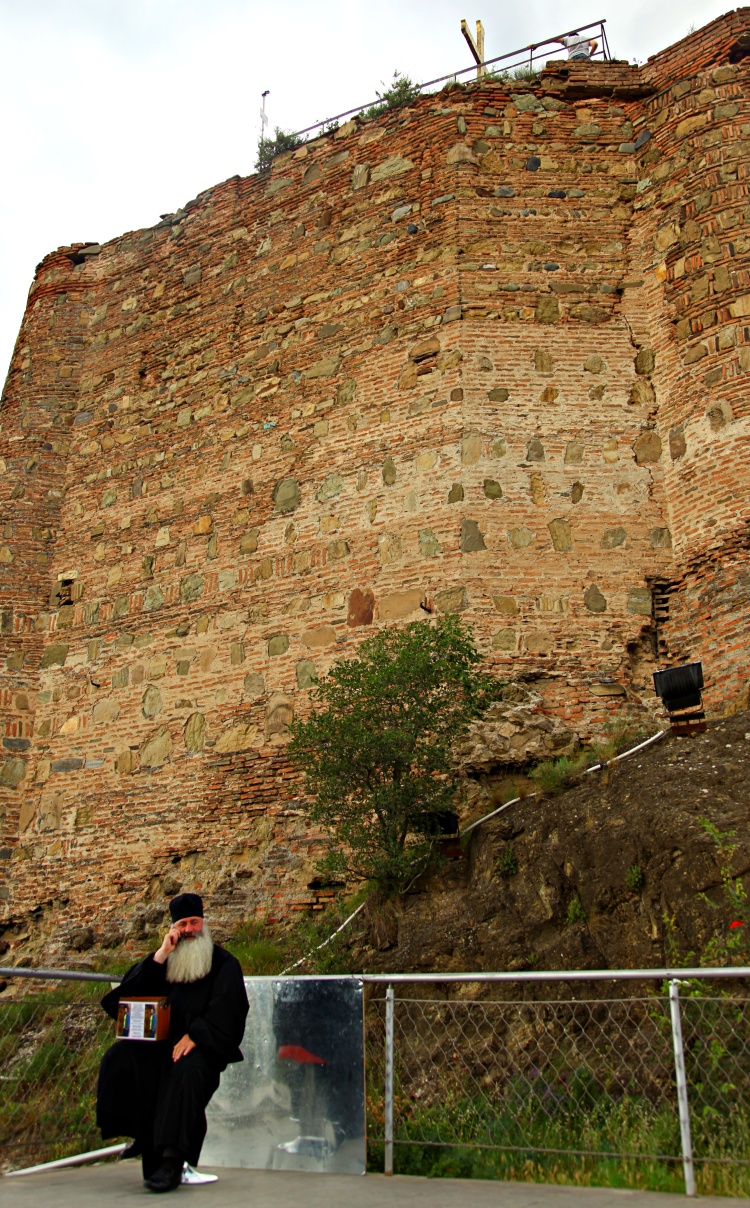 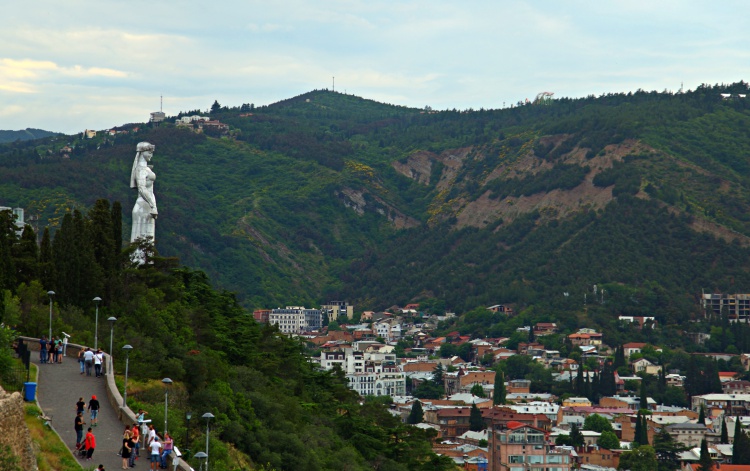 Statue of Mother Georgia, holding a bowl of wine on one hand, and a sword on the other. Its wine is symbolic for friends, and sword for foes. 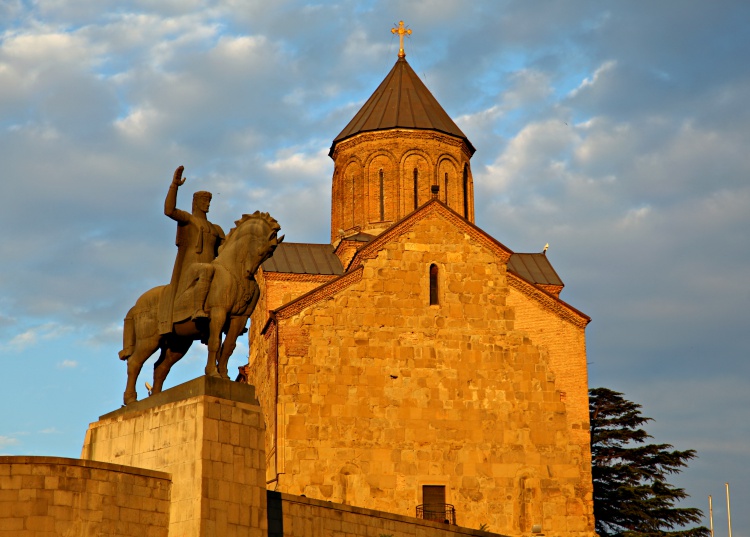 Monument of King Vakhtang Gorgasali, a former king of Iberia, with the Svetitskhoveli Cathedral in the background. 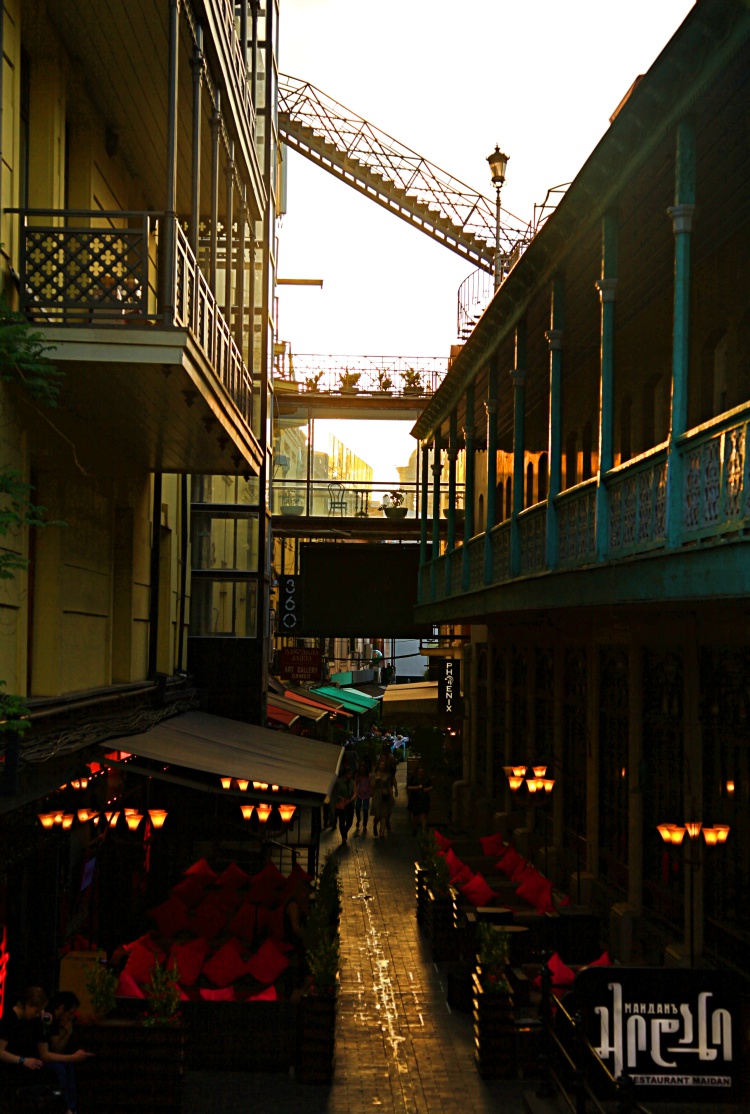 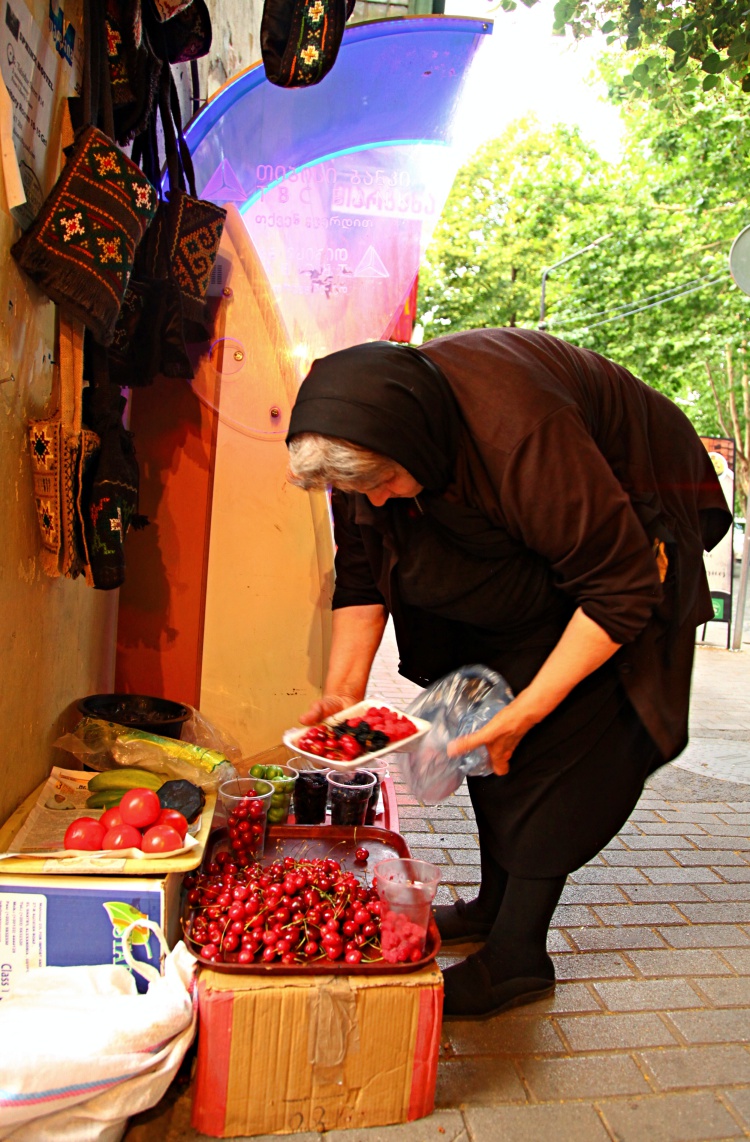 Abundance of summer fruits in anticipation of our long train ride tonight!


Next, our overnight train ride to Zugdidi, then to Svaneti, one of the most beautiful regions of Georgia!