Day V
Destination for the day: Sg. Lembing. Up even before the crack of dawn, 5:48am. When auntie came into the room, I was already three-quarters awake ‘cause I just got out of the bathroom after nature’s call. She told me there’s no need to take a bath as we will be climbing up some mountain there. Sg. Lembing is a small quiet town about 30 minutes’ ride from Buaya AND uncle and auntie’s hometown, they used to study in the same secondary school.

Was out of the house by 6.30am, minus Teen Hao and Wei Shan as they have tuition later that day. It was still dark outside and I was so darn sleepy… First stop was at the foot of a hill where there are stairs leading halfway up to the hill. Mind you, the way up was very steep and with the lack of sleep I nearly threw up at one point. There are roaches that live in the hill too.

Back down, we went for breakfast. The town is mostly made up of old people, where uncle told me that the old just sit around yam-cha-ing the whole day while their kids working elsewhere will sent them money so that they can yam-cha for the whole day. It was a pretty laidback town, where everything goes around slowly and the only entertainment available there was karaoke. We had curry mee, that’s one of their specialties there, except that their curry mee is slightly more spicy than the ones in Penang and you sort of choose your ingredients in the mee, Yong Tau Foo-style. I had stuffed brinjal, pork balls (as in meatballs-pork balls, not pork balls-pork balls), fish stuffed lady’s fingers and some other fried stuff.

We tapao-ed quite a number of delicacy, namely ‘nasi dagang’ (glutinous rice with curry), some kuehs with gula melaka). Then it was back home after that, just wanted to get some much-needed sleep. Don’t really feel well the whole time with BTY’s fast and sharp cornering. I was just sitting right behind him and I am beginning to think that I should have thrown up right on the back of his neck to pass the message to take turnings slowly. Darn him.

Auntie taught me how to make Tiramisu! She is so darn geng, she can cook practically everything and she can bake practically everything. First, she baked an inch thick sponge cake, which will later be divided into three layers for the layerings in the cake. Then she mixed 4 slabs of cream cheese with a packet of whipped cream with a mixer until the cheese becomes very soft and gooey. This will go in between the layers of the sponge cake. Then she made this flavouring using coffee liquor called Kahlűa boiled with hot water and then distributed evenly to the three layer of sponge cake mentioned above. The cake is then leave to set in the fridge, takes roughly a day for that. I’m so sure it’s going to be good! 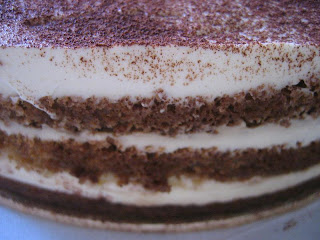 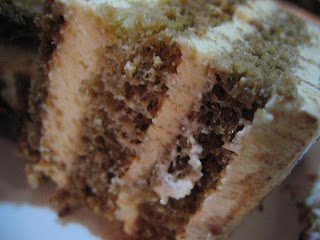 A piece of heaven

Night time had a simple dinner, fried fish with stir-fried mengkuang and stir-fried bean sprout leaves. At 10pm, TY and I went over to a friend of his, Le Seng, apparently also studying in USM (HBP) for Gimrummy. Hui Leng was also there (USM-Chem) and the four of us gambled until close to 4am. I won about 6 bucks whereas TY +1 or 2 bucks. I would love to get my hands on those mahjong tiles and just have them handy anytime. I think it’s fun just to pass time and spend time with friends. Definitely not a reason to earn money obviously.

After the gamble, we SHOULD have just gone back straight as we are, again SHOULD be getting up early tomorrow for Kemaman, a town in Terengganu. But, as it was a Saturday night, I assumed that we can catch some live actions and Ah Guas around Kuantan. We went to a few places but I was fairly disappointed as I only saw a handful of them, some were real old and fat, only a couple I saw could pass as having a voluptuous body. I had wanted to see some action going on, preferably in the back of a car or somewhat but I guess I was not lucky…

Posted by Giffo Hoots at May 21, 2007
Email ThisBlogThis!Share to TwitterShare to FacebookShare to Pinterest
Labels: Comfort-Homeliness, Food-Dessert Delish, Trips