Few days ago, I paid a visit to a wet market near the place I'm staying at in Penang. It was my first time there and I felt so out of place with my orange backpack and shorts amongst all the other aunties. I have planned on cooking again, this week and decided to buy fresher ingredients from the market than those packed ones from Tesco.
I first visited this old lady's stall. She totally ignored me! But I just poked around her veggies and eventually she lugged herself over to layan me. I wanted to make lotus root soup, and there were two kinds of lotus root sold there, one is white and clean-looking, and the other slightly brownish grey and dirty. The aunty told me that the clean one's from Cameron and the dirty one's from China. I picked the Cameron root, only to find out from TY later that it's those kind that people use to stir-fry stuff and not to make soup. 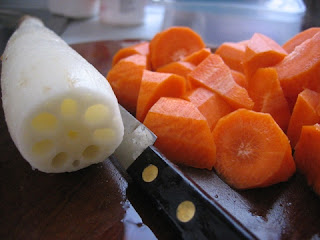 Wrong root.
I also took a look at the uncle selling chicken. I know I'm being very the sua ku, but it's so gross the way the uncle slits the chicken's throat and threw them into this tall pail with the other dying chickens. I have never bought chicken at a wet market, not to mention chicken to make soup (normally those uneatable parts of a chicken, ie chicken feet) 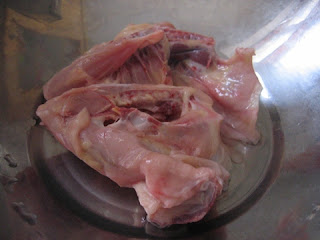 Not knowing what part of a chicken that I wanted to make my soup, I spluttered, "Er, ai kun th'ng eh." (Err, wan make soup wan) Lol... such a stupid thing to say... but that uncle not bad also okay... he even recommended to me which parts to buy at only 50 cents. It's probably those parts that the uncle has to throw out at the end of the day anyway...

p/s I know, my blog has become increasingly auntie
Posted by Giffo Hoots at October 05, 2007
Email ThisBlogThis!Share to TwitterShare to FacebookShare to Pinterest
Labels: Out of the Ordinary