26th March, 2008 at g-Hotel. Evan claimed that the event will be so boring that basically we're only supposed to sit and wait for the night to end. Oh well, it may be so some of the time, but it's my first time to g-Hotel! Have always heard of the simplistic, cool interior of the place, and couldn't wait to get there.


Reached there late (again) cos of u la tinyen, circa 8.20pm but it's not that bad as the big-shots are not there yet, with the vice-chancellor being the biggest shot. Was there with Chin Teng, he had to drive TY's car as I was wearing heels, couldn't manage the clutches with those pointy things.
Malam Anugerah does not have a theme (boring fact #1), but dress code is formal, and er, bersopan. Guys can wear batik or whatever shirt that looks presentable lah. Even with us arriving so late, we had to wait some more, hence the loads of volunteer models and unwilling photographers. 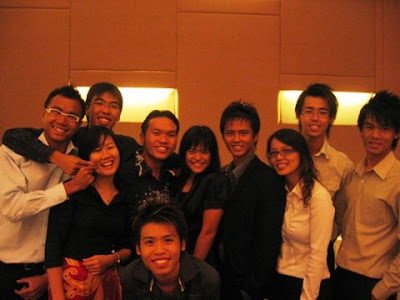 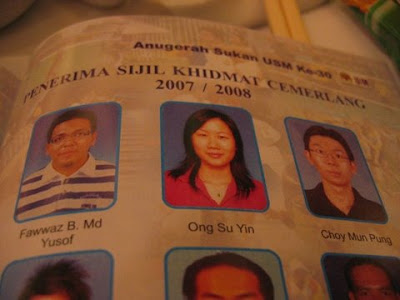 Yippee! I'm famous! :P but then so dumbo wan.... I had two pictures in the booklet, one for Anugerah Perkhidmatan and another for half colour cert. The other picture printed my name as Ong Su Yim. Cau Cieh's was worse; Khor Lau Lieh, muahaha!
Then with the girls... 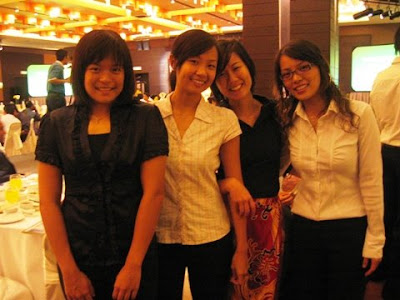 I wore a black top which my sister forgot to bring back to US and my mom's batik-ish sarung. Love it when I don't have to fork out a bundle of cash to look good :)
My expectations were high for the food~ but damn! Soooo disappointing. We had an eight-course meal (sounds auspicious) with sub-standard imitations. 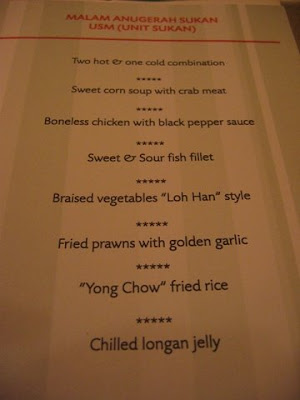 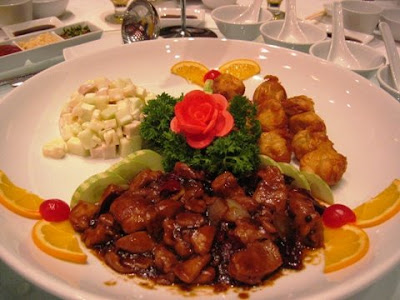 Two hot and 1 cold?.... Sien.... Even at Chinese restaurants, they serve at least 5 different types okie....
A bit too ovious what's hot and what's cold. There was this salad thingy, with honeydew cubes and ham, kung po chicken or somewhat and some deep fried shrimps. 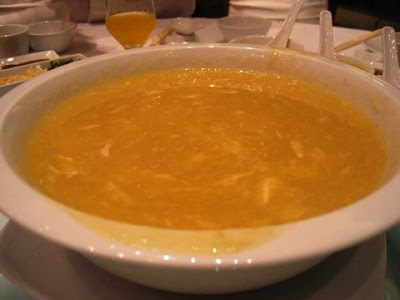 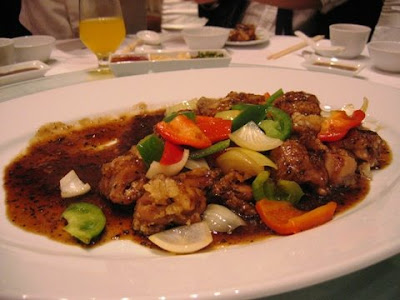 Boneless chicken with black pepper sauce. yuppee. The sauce was not bad lar, but one thing is that, the servers are like, not properly trained. They are not even able to scoop food professionally. And the food portion! My god... I think all those 8 courses will only fill an eighth of Kenneth's massive stomach. From the first course, those at my table are already making arrangements for supper. 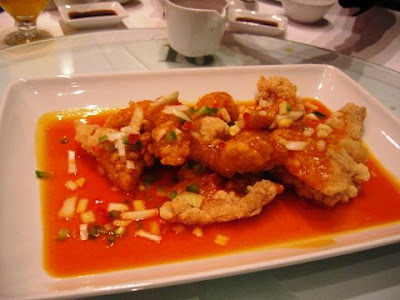 The fish tastes kinda yucky. I can actually smell the fishyness even through all that thick flour and deep fried and sauce. The fish meat is even pinkish. Sigh.
Next course was this broccoli braised lo han style, whatever that means but I did not take a pic of these: me, popo and evan went for a quick toilet break. So I replace the boring vegetable with an even more exciting picture ... ;) 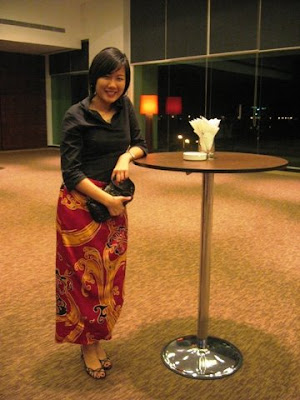 During the broccoli course right... That was also when they started calling out names of captains to take certs. Just as Evan was about to bite into a broc, I warned him, eat la, later pieces of the veg gets stuck to your teeth then you'd go up and give a big smile at the VC and you'll look real cool. That vainer then pushed his broc aside.
Then then hor, the server had given Po Koon this really huge broccoli, then we started teasing her to just eat la, can practise mar. lolz
Does this look like fried prawns in golden garlic? And what's with the bombastic description? Of course garlic is gold... what other colour can they come in? 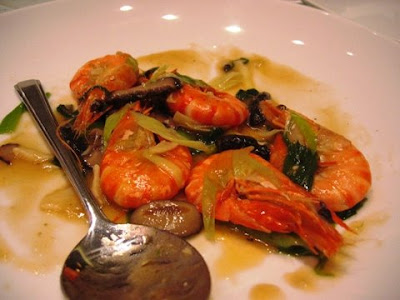 Yong Chow fried rice, whatever that is. 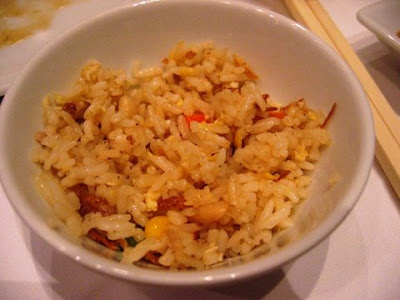 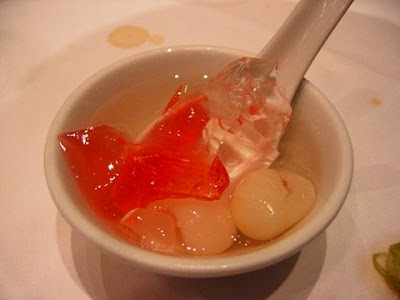 I had not yet taken the pics of me taking the certs up on stage, they're with Po Koon, but this is as close as it can get la I suppose. 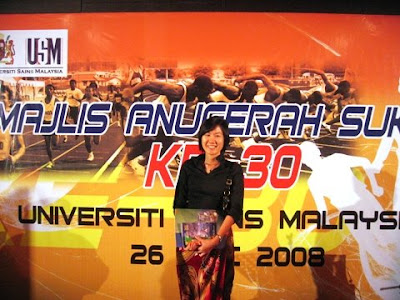 Soo Bee was also one of the nominees for Olahragawati. There were six nominees, 5 Chinese and 1 Malay girl. Well, you can guess la who took the award. Hmmph. But no matter, cos the award of all awards is the Purple Cert, which 3 got. 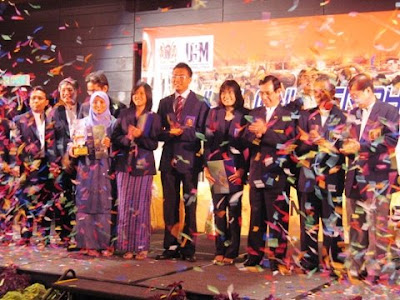 I think this pic really look nice cos it totally focuses on the 3 winners, Yuen Hoong (karate-do), Soo Bee and Tze Yang. This award totally beats the olahra-whatever-ti. 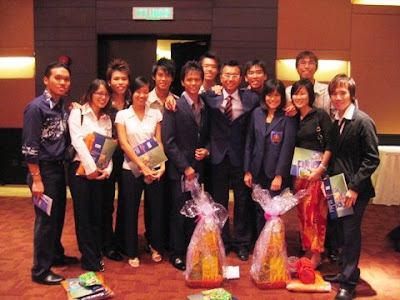 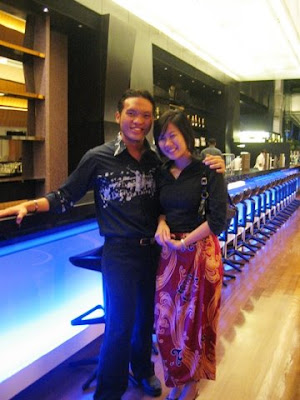 With Chern Chung and Abe 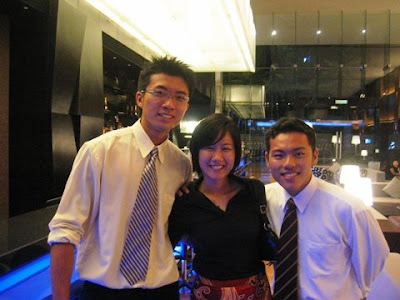 After the Anugerah night, it sort of gives you a sad feeling. All your hard work and contributions are recognised... in a piece of paper.
Posted by Giffo Hoots at March 27, 2008
Email ThisBlogThis!Share to TwitterShare to FacebookShare to Pinterest
Labels: Aqua Dynamics, Events