Promised I'd give TY a treat soon as I receive my first pay.

At The Ship Batu Ferringhi.

Called up the restaurant at noon on Saturday to make reservations for two. Told them we'd be there at 7pm.

Planned to go for a movie after dinner, so thought that we'd better head out early, around 6 so that we have enough time to collect our movie tickets and make it for our 7pm dinner. Headed out slightly later than planned, at 6.10 due to unforeseen circumstances. Traffic wasn't bad and we reached Gurney Plaza at 6.30ish. Dressed in a black (not little) dress with "complicated embroidery" little purse my aunt gave me "for work".

By the time we got those tickets safely with us, it was already 6.45pm. Didn't bother to make it on time anyway, cos customers' are always right! 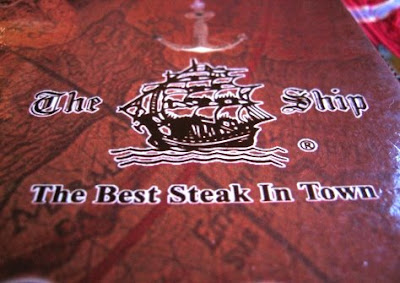 Got greeted by this naive looking host in a female sailor uniform. The uniform was a bad fit and she looked like she was confused as to why she was there. Told her about the reservation and she showed us to our seats.

We had a window seat.... with little or no view. The glass window overlooks some shoddy alley to the back of the 'restaurant', or should I say the stern? 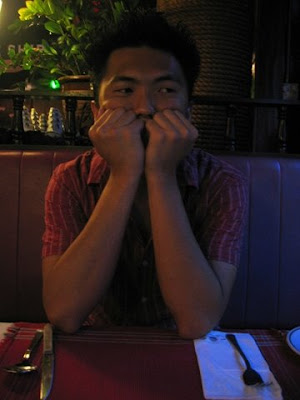 Told Mr. Bottomless to order whatever he wants. So long as he enjoys the meal and is properly filled.

A waiter came along to receive our orders and he too, seems lost and appears not to be local and have a bit of a trouble speaking English.

Notice some grammatical errors on the menu. I think I have and will never enjoy cooked oyster. That was my only complaint of this dish. Salmon was juicy, ham was average, thousand island complements the shrimps, crabmeat's totally crab meat- unlike those so-called crabmeat. 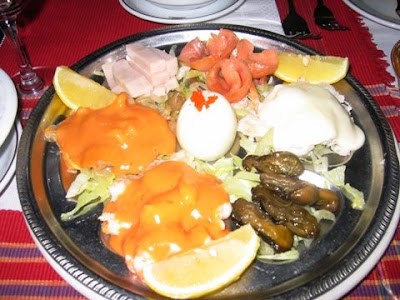 That's a hard-boiled egg right in the centre. 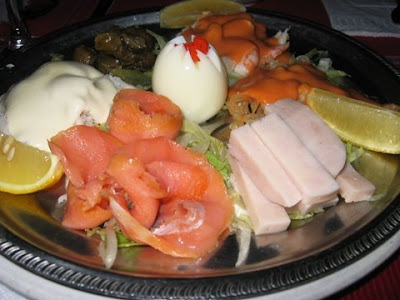 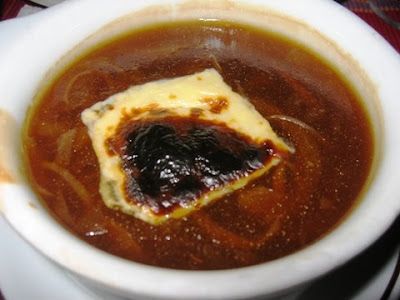 Totally wasn't up to expectation.... The melted cheese on top was burnt charcoal black that gives a burnt taste and it simply wasn't oomph enough... :( 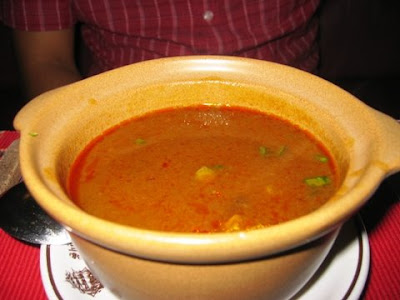 I'd say that I prefer this soup to mine. It had a slightly spicy taste, but it's not overwhelmingly hot, it's just nice.

Also a complementary salad from an ordered main course. 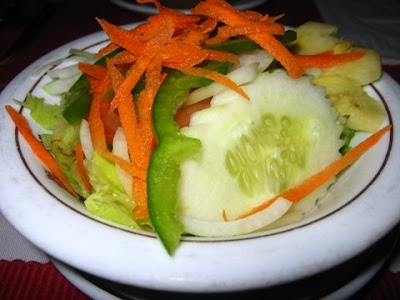 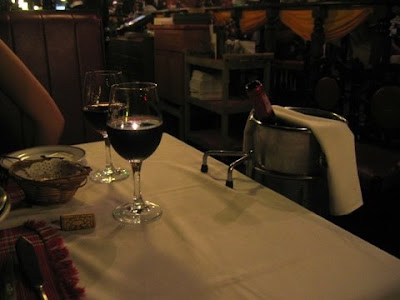 Requested red wine.... to go with our reds. 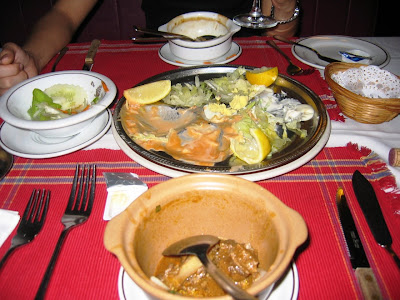 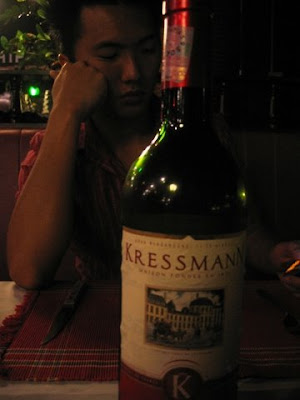 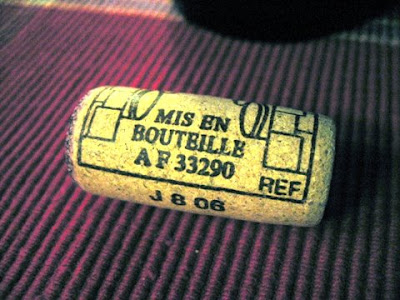 I'm not an expert in wine, but TY said that the wine is still relatively young. 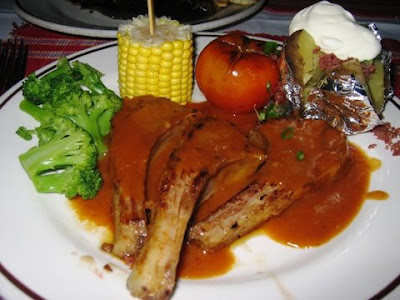 'A selected cut from the loin section, served with prime vegetables, corn on cob, baked potato and a bowl of salad' 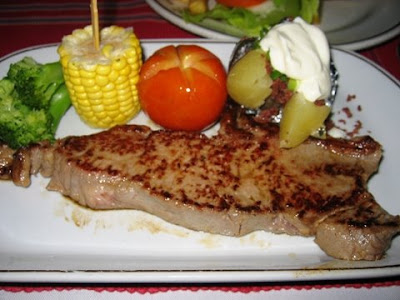 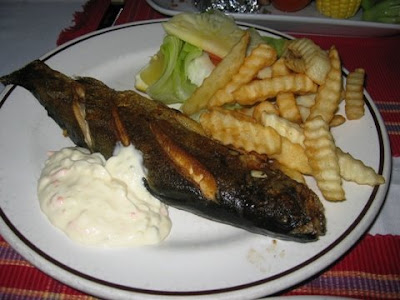 My favourite among these would be the steak. Cooked to a medium rare, it's very juicy and the meat's tender. My lamb was not bad too, just that the gravy is not quite something that I enjoy. The trout is probably the worst.... it's just like some any other ikan bakar. It's quite hard and has load of bones. Well.... sorry that I'm not quite a fish person... Though I would take salmon or dory any other time.

But the baked potatoes are great lar.... they're served with bacon bits, spring onion and sour cream. Yummers!

We sure did take our time with our meals.... 1 and a half hour later, we're still sitting with bulging bellies while sipping wine... Then how can we possibly stop eating before dessert?? 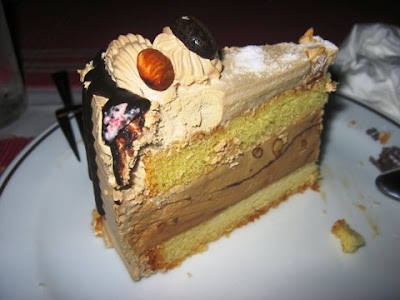 It was not the cake of my choice... I wanted chocolate, but they're out of that!... They only have strawberry ice-cream cake, while other options for dessert would be banana split or some other stuff covered in ice-cream.

Anyways, choices aside, the cake was quite good. Though at the time that the cake arrived, this senior staff of the ship came over to our table and made small talk. Had no choice but to layan him while our ice-cream cake slowly melt in front of us :P 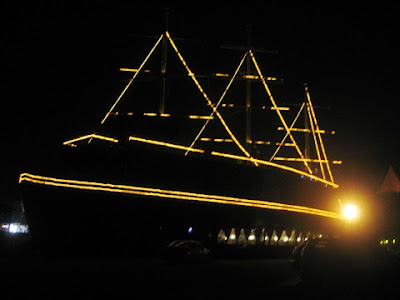 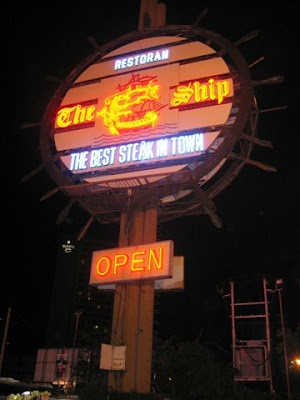 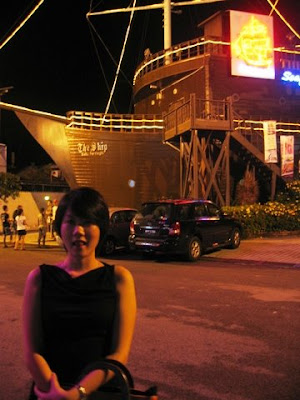 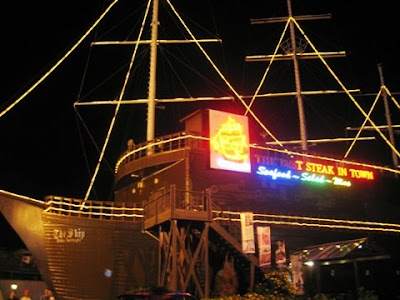