Since I was sponsored, why not? ;) But really, this night totally ruined my diet. But still, exciting! 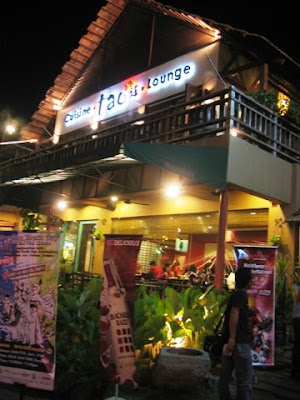 The decor there is cool, but I don't get why is it that they chose some Thai-inspired with Buddha statues decoration for a Japanese themed restaurant? 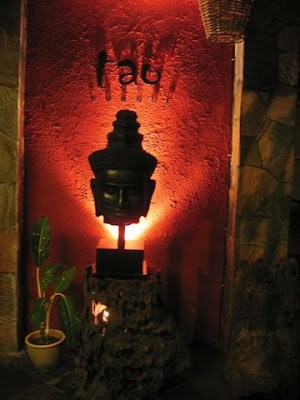 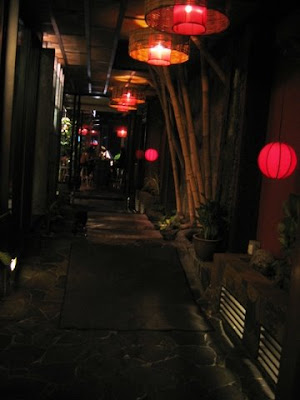 These are acceptable lor. Bamboo and lanterns with zen-like man-made pond. 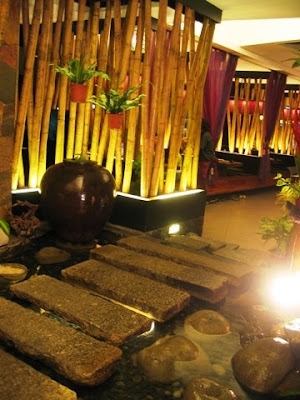 Anyways, we chose to dine buffet style. The difference between buffet and a la carte is that, by buffet, you pay RM45 exclusive of taxes and whatever shit. Prices as stated on the menu t

Papaya wrapped in salmon! The topic then moved on to papaya milk and its miraculous enhancement properties. 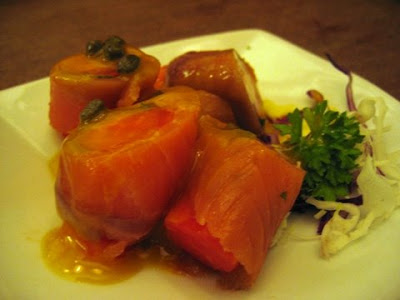 I did not really pay attention to the names, but I'll try to describe them as well as I can. This one here is chicken teriyaki kebab with garlic slices. 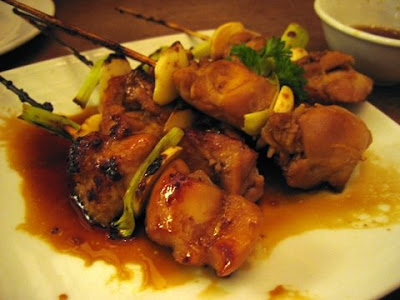 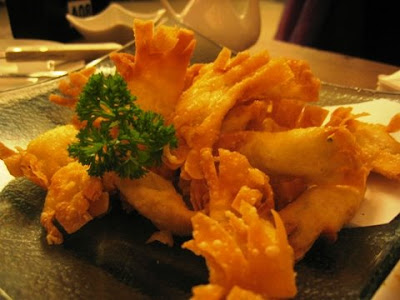 Scallops! With thick creamy, slightly spicy sauce. This I give 2 Yums. (5 being the ultimate) 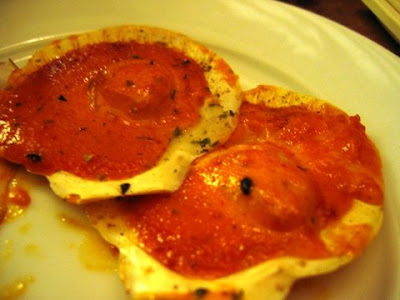 Edamame- one of my faves. I think we ordered like a total of 6 plates? But some batches that came were overcooked and too salty. 1 Yum. 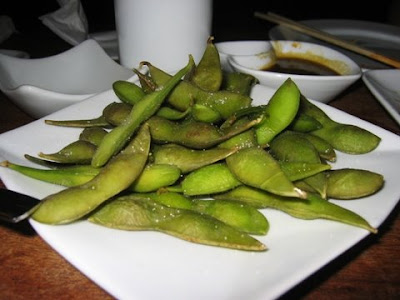 The dish that everyone craves for... But look at the portion! We never had enough and the serving takes an extremely long time to head to our table. Had a total of 5 plates of this. 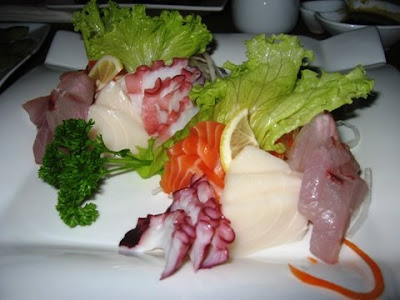 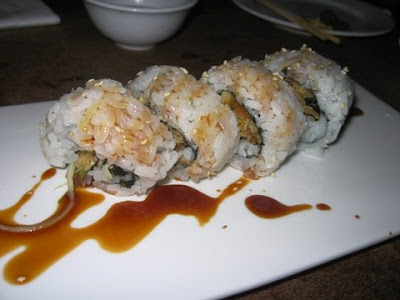 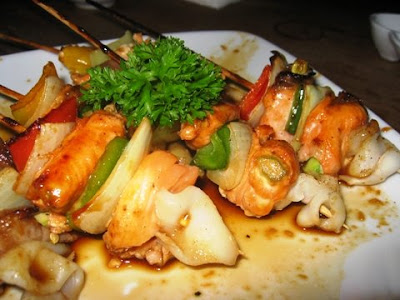 Baked Cod fish (?) in the same sauce as the mentioned scallops. 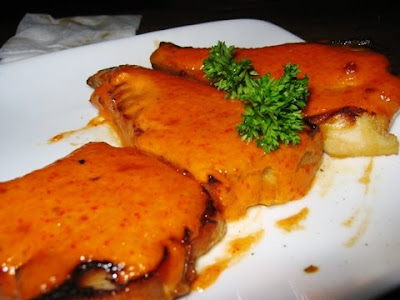 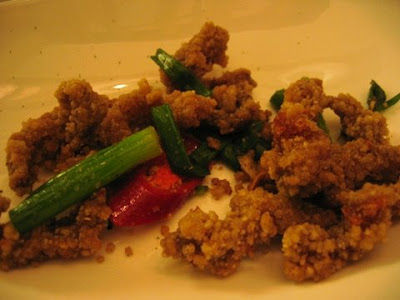 Assumed this is stir fried beef in some brown sauce... 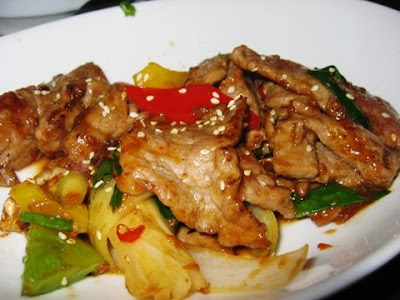 This one is really good too! Too bad I cant remember exactly what sort of fish it is. 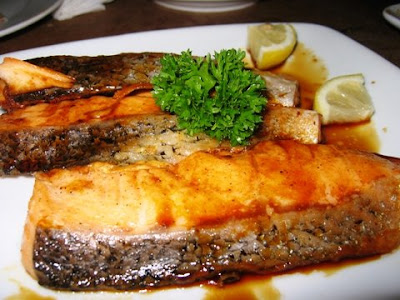 Kimchi squid. Didn't like this though. Anyway, why the hell is Kimchi doing in a Japanese restaurant? 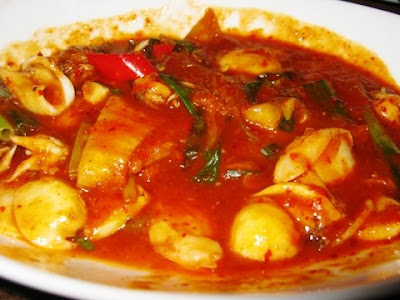 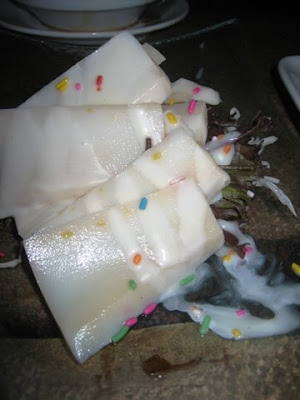 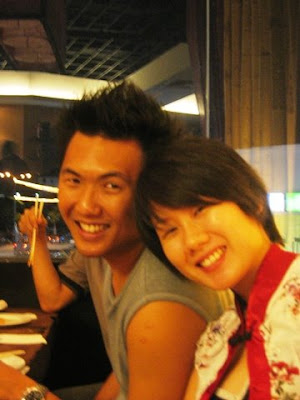 Oh oh oh! This one is really good, I think it's also cod fish and it's baked to perfection! Very soft and fluffy. 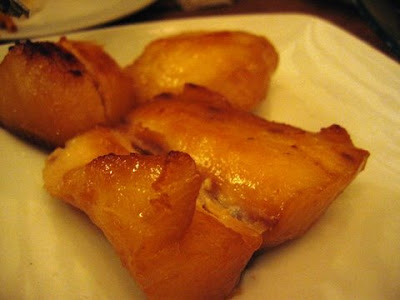 Then tempura! There are tiger prawns and also broccolis and sweet potatoes and carrots I think. Apparently tempura does not originate from Japan (contrary to popular belief) but from Portugese. 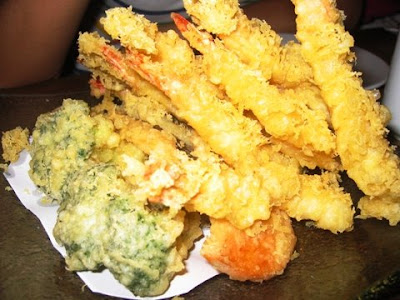 The bunch of bottomless pits. That's Kenny at the back from Vistana who got to know Jecilis who used to work there too. Lookie me kimono top, cute eh? :D 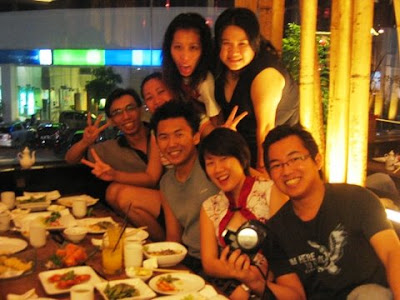 Then some sort of dim sum with meat fillings. At the point that this dish arrived, I was on the brink of exploding and I did not try this. 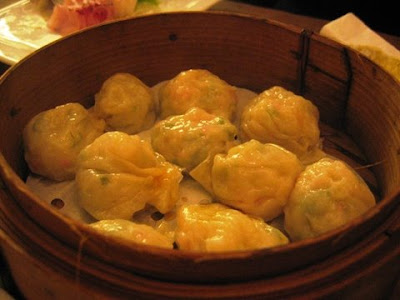 Syok eh! Although by the time this was all over, I was thinking that I might get sick of Japanese food... too bad that was not the case the day after. Anyway I think buffet concepts are very bad for people... After paying for a certain sum of money, you will want to justify that amount by gobbling and stuffing yourself, which is a no-no... especially so when you're hoping to lose some weight. 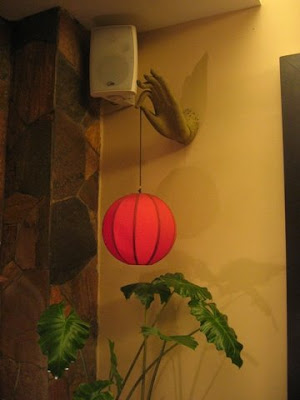 Never quite get the Buddha concept too. 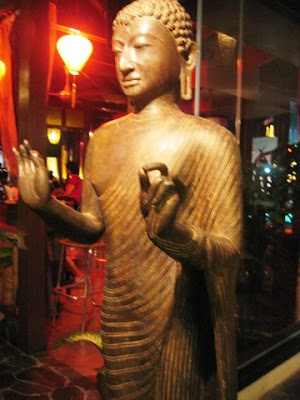 Will I do it again anyhow? Of course!