Ever since I started to work, a number of lifeguards kept on bugging me to treat them to eat. Not wanting to be a spoil sport, and after much postponement, finally all agreed to have it this weekend. Coincidentally, the Saturday was also Dad's birthday but apparently Mom and him already made plans to have 'senior citizens dinner' (Mom's choice of words) that very night.

The whole day was pouring cats and dogs and so very much comfortable to sleep in. Got up close to noon, but outside it was like 7pm, dark and brooding, with intermittent moderate and heavy rain. Got meself cheapo fried beehoon and that was my lunch whereas TY cabutted out later for class.

And how could I not have my precious evening naps? Took about 2 hours of that before TY came back...

Anyways, long story short, reached Teluk Kumbar after encountering many flooded roads and traffic jams circa half past eight. 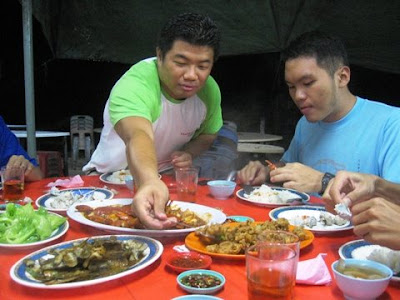 So there's the than, deep fried sotong, 2 veg dishes (yau mak and some cabbage I presume), herbal clams soup, those shell thingie you have to poke with toothpick....6 so far... the other 3? 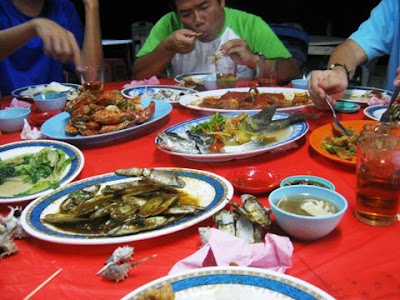 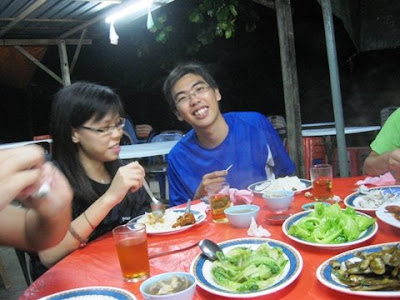 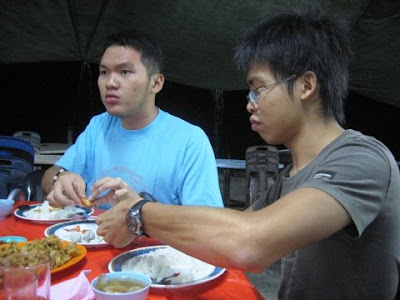 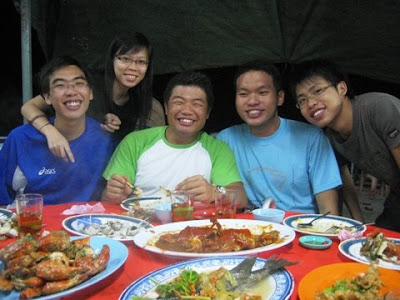 Upon invitation only! I very exclusive de.
About 13 bowls altogether later... we just sat back and gave instructions to the only undergrad to think of the next place to go after dinner.

Apparently, Kenneth wanted to boogie (lol) but didn't want to admit it. King of Boogie, Evan just boogie-ed the whole of last night but he was okay with another round off boogoe-ing. Whereas for Chin Teng, no need to say, confirm refuse. 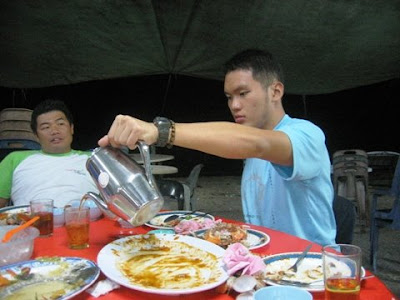 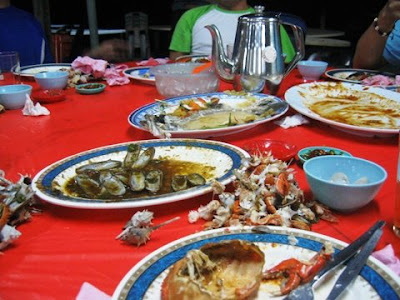 So we just spent some time listening to Evan's adventure in Sabah with the natives and the sky-high food prices. He also brought along some souvenirs for all of us. Beaded bracelets. 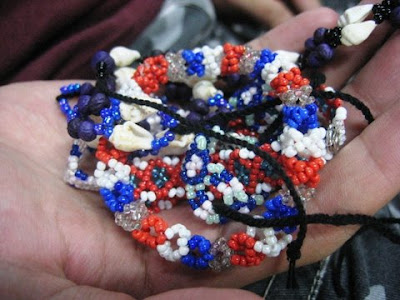 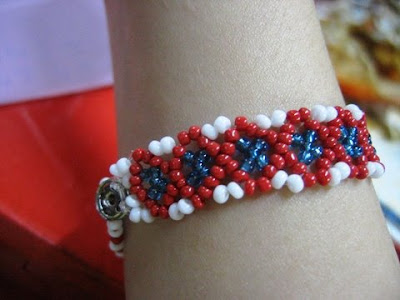 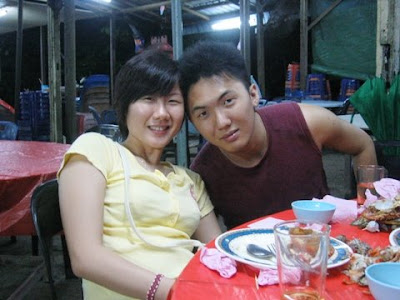 There was much debate whether to go to a place that serves alcohol or just have coffee. Last skali decided to go Old Town kopitiam at Bayan Baru, much to the disappointment of Soon Jiun. I think he very badly wanted to get wasted hahahha. 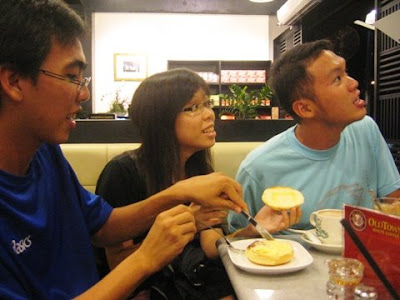 I actually am very full by the time we reached that place. But I could not resist the temptation to order a plate of French Toast. Successfully added another 2 inch to my waistline that night. 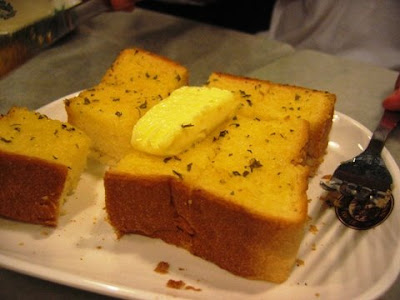 And my 'Enrich' hot chocolate drink. 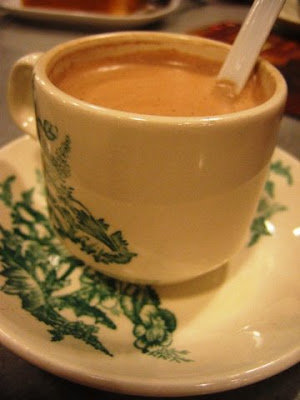 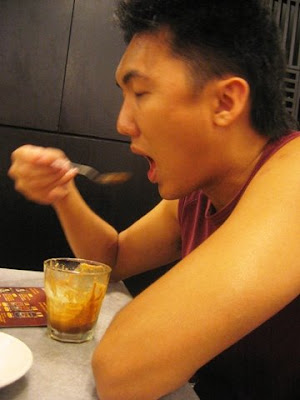 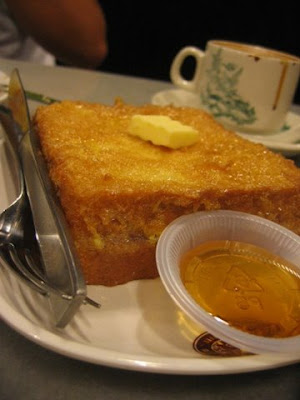 Enough cals to last for a couple of days. 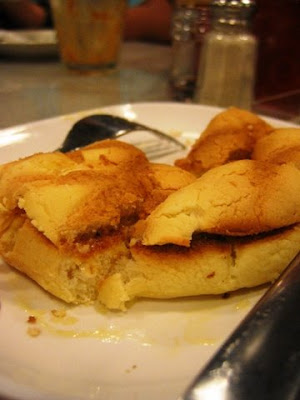 Old Town closes slightly after midnight. All of us were still restless and refused to go home. So I thought, why not have some more coffee back at our place with those Kuantan coconut biscuits that we brought back.

But Chin Teng made us an even better offer. Few weeks ago, he went to Langkawi for his Masters study trip or somewhat like that and along the way carted a few golden bottles of elixirs.

To make up for the fact that he couldn't join us any longer than Old Town, he presented us with a bottle of Bacardi Limon...

The remaining 5 (Ev, SJ, KK, TY and me) carted off our precious bottle to 7-11 for some extra goodies. Got a carton of orange juice, another of apple and a bottle of 7-Up. Oh, also a pack of ice cubes. 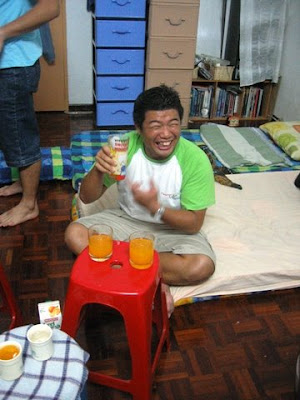 Lookie Kenneth's happy one line face. He's holding my Snoopy glass, a birthday gift from Wei Kiang back when I was in 2nd year I think... A cute fact: Sinful drink in an innocent-looking glass. Well, his glass was the giant among the other 4. Evan being very vain as I requested a photo of the two of them together. He proceeded to throw on his rainbreaker jacket and struck a pose. Vainpot.

I think it was one of those rare nights that I did not really control how much I drink. Because I do not have to worry about having to walk in a straight line, or puking all over a car. A few cups and I know for sure it's going to be a good night's sleep.

Played memory game with Evan (totally sucked at it when your brain's drenched in alcohol), had a good laugh about some slip-ups.

Kenneth looking like PauJingTien (Justice Pao), all lobster-y red and Soon Jiun, playing the Xbox. I think Kenneth has got no real skill at winning these games. He just jabs at all the buttons in 1 go. lol. 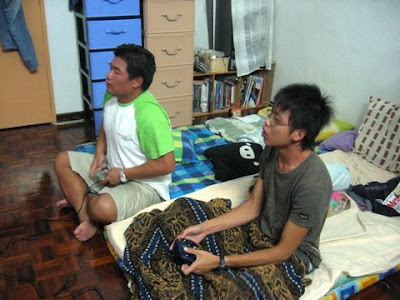