I insisted SCC & gang that I will treat them dinner before she leaves for Spain, and finally on the last weekend in KL, SCC made reservations at Jung Won Restaurant for a Korean dinner. She's been there a couple of times before and said the food is quite good, with a nice ambience.

Jung Won is situated somewhere off Jalan Ampang opposite a Sayfol International School. Jalan Ampang holds a number of Korean communities and is regularly referred to as 'Little Korea'. 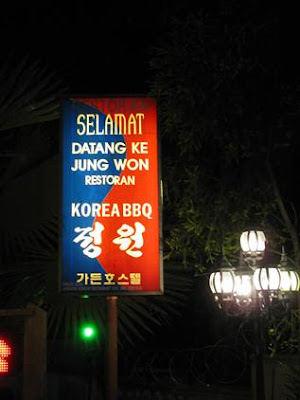 It was during a dinner with the others in a Japanese restaurant and SCC was telling us that Korean food is extremely pricey in Spain, costing 50 Euros for three dishes or so that I got the idea to bring them to have a Korean dinner.

The outdoor seating looks like a nice place to dine al fresco. Unfortunately, Angel and Ji Yee both have problems sitting on floor lol. So we had to opt for indoor dining :( And to think some of us went through the trouble of putting on long pants/jeans and spraying mosquito repellent because we thought we're sitting outdoors haha! 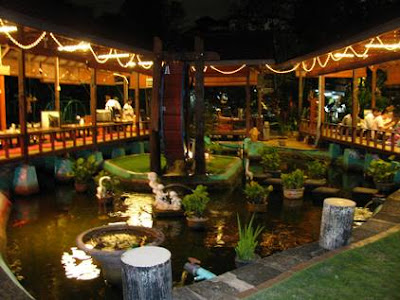 Compared to the outdoor seating, the indoor is a bit bleah lol. But you get comfortable with it after a while. Quaint decorative adorns the walls of the restaurant. By the way, yes, we were the only group dining inside the building hahaha. Later there was another family who poked their heads in from the doorway but retreated to the warm night outside. 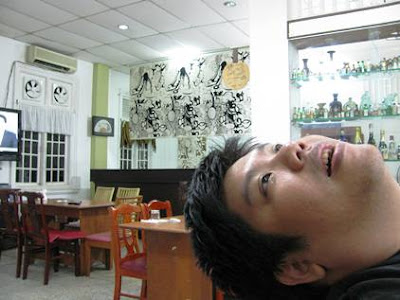 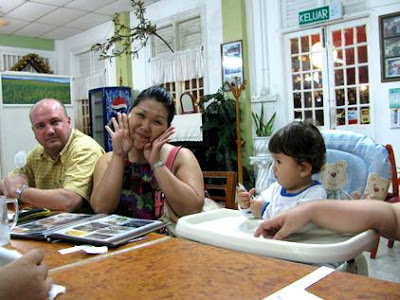 Why the mom act cute than the baby! 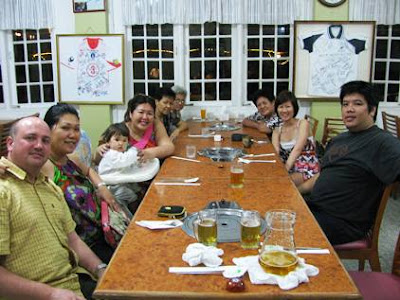 The large family gathering hehe. Oh, outfit of the day was a colourful, extremely low cut top that SCC got for me from Spain. Can't see too clearly, well, if you're lucky (or unlucky, depending on how you see it) I think there's another clearer shot of me in ze top :D

Usually it's pretty full and busy in Jung Won but we've picked a Sunday night for the dinner (because the next day we have a replacement holiday in honour of some Malaysian football team winning the Suzuki Cup after a 20 year draught or something like that. Big deal but don't matter, get holiday :D 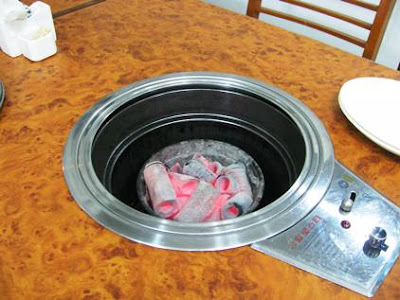 We ordered a number of items, mostly barbequed meat. The waiters later brought in plates of raw marinated meat and they were cooked over there electric-controlled charcoal pit. Pretty cool huh. Great taste minus all the hassle.

SCC and Angel are really hilarious when I took photos of them. I captured a shot and showed them (for quality control, some are really strict about this you know) and SCC said "My arms look so huge!" while Angel exclaimed "My belly!". Aiyoh pening. Thank goodness for digital cameras. 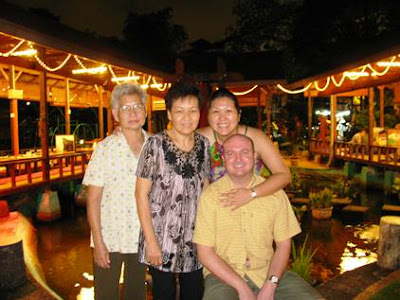 Even this shot also, initially SCC was sitting on a tree trunk in the foreground (the one Angel was sitting on in the pic) but when she saw my shot, she insisted Angel sit in front while she hides three-thirds of her body behind him hahahhha. I love digital cameras. 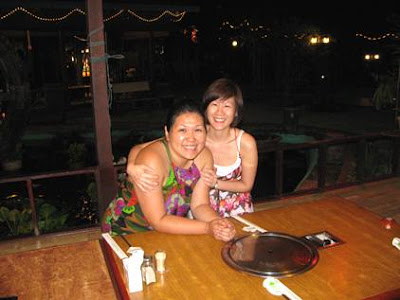 No extra points on guessing why I have my hands wrapped around SCC's hands hahahahha. There's only a small glimpse of the top SCC got me. If I were to wear them without an inner layer, my boobs would spill out at the slightest movement. 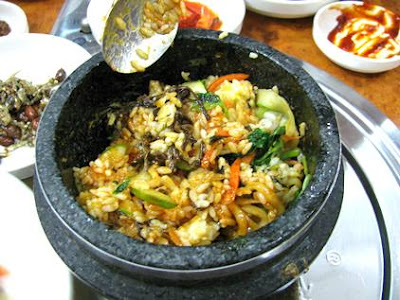 Bibimbap. Warm rice served in a bowl, with julienned seasoned vegetables and raw egg which is mixed together before eating. The word 'bibimbap' literally means mixed rice. Tried it and it was not bad, loved the colours and the different ingredients that make up the dish. 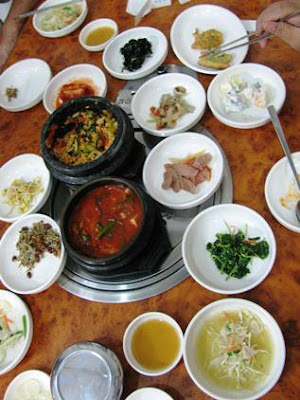 There has to be about a hundred of these banchan served. Ok, fine. maybe not a hundred but 11 sounds like a more reasonable figure. Among them are stir fried bean sprouts, the preserved cabbage kimchi, deep fried anchovies (they are really our ikan bilis. same fish, same taste lol), sliced sausages, and honeydew fruit salad I think. 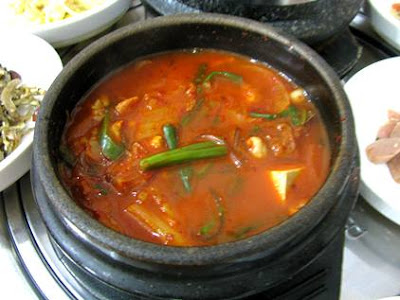 Ah, the kimchi soup. No doubt our pathetic kimchi instant noodles are a far cry from the real thing. Bright red and pretty spicy, this is one coveted soup during one of those rainy days. IMHO, best eaten with white rice. 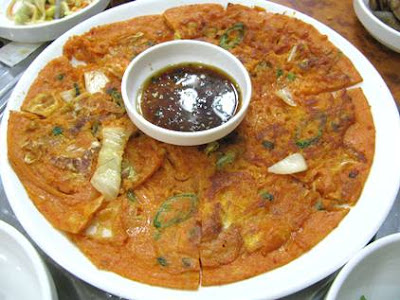 A flat Korean omelette which I don't know what it's called in its native language. Just only slightly spicy but has great flavours. Dipped in sauce (which I can barely recall now). Jeez I do give lousy comments. Cue to distract reader(s) with more food pictures. 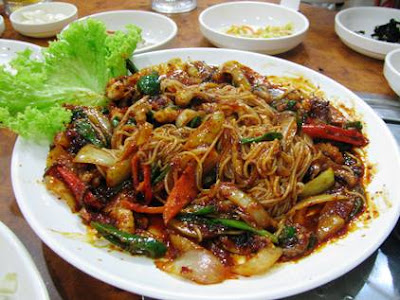 Spicy Korean kimchi noodles. One of the dishes that was snapped up faster than you can say 'kimchi'. There was more plates of meat which one of staff barbequed for us but I didn't photograph because, well, they look like meat -.- Ok I was too immersed with stuffing myself that I forgot. One thing worth to note though, the meat was perfectly BBQ-ed. Not overcook and just tender enough for the beef to melt in the mouth. 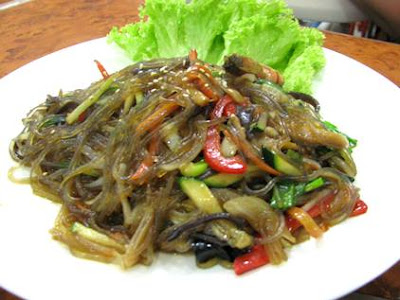 And knowing BKK, even with all the plates stacked on the table and after a few rounds of free refills of the banchans, he voiced out loud enough for everyone to hear that there's still room in his stomach for more hahaha. And the last dish to be brought to the table is this Korean stir-fried glass noodles. Very normal and too oily for my taste, this plate costs a whopping RM32.

What I think? Personally, the food served is pretty average, I guess we're (in this case, I) paying mostly for the ambience and service. PCC even commented that there's a place serving Korean food in Damansara that offers better taste. Bill came to a staggering RM370+ hahahaha and they did later serve us with some cut watermelons and barley drink I think. LOL.