Let's see, another round of reflection on the year that has whizzed by yet again. I felt like there hasn't been any sort of achievement that I would want to gloat about. Not quite in career advancement, emotionally, not quite sure.

I think overall, 2010 has been a pretty bad year, especially towards the end. Losing my beloved Ah Ma, while seeing her suffer, bedridden in the hospital has been the most heartbreaking experience I would ever have to endure. I don't indulge in too much detail lest I breakdown again. She has lived a long full life and all of us children and grandchildren have treated her with much love and care. I have a black and white picture of her in my purse and every time I look at her youthful looks (I think she was about 40-50 years old in the pic?) I am reminded to live my life to the fullest.

I also lost another dear friend, Wei Shan. Memories of her make me sad but I try not to dwell on things said and done.

It hasn't been all tears and mourning though. Early 2010 I underwent numerous training, at the gym and outdoor hiking until I eventually scaled the highest peak in South East Asia. The moment of exhilaration once we lift ourselves onto the top boulder was indescribable.

Traveling has been limited to neighbouring countries, like Singapore and Thailand. I would love to expand the horizon more and hope to travel to places like Hong Kong, New Zealand or even Australia.

That pretty sums up my year, with the bonus of a handful of makan places that have fast become favourites.

A busy New Year's Eve it has been. PCC invited a few of her friends over for late lunch and typically it's Ji Ee and SCC who's doing all the prep and cooking hehehe. 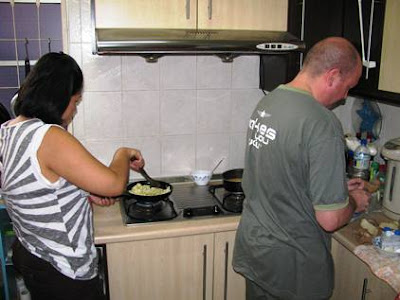 New meat in the kitchen: Angel.
Menu for the day: Spanish tortilla, paella, melon with jamòn, and tapas.

Let's start with a brief introduction of the Spanish tortilla, shall we?

Unlike the Mexican tortilla, which is more like a flat bread like where you see holding a wrap together, a Spanish tortilla is richer in texture and taste. 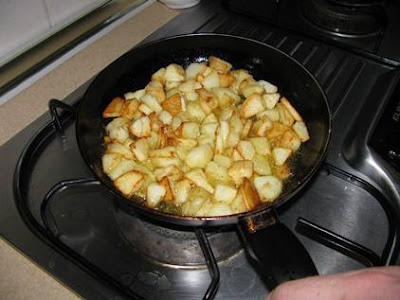 First potatoes are skinned and cut into small cubes before frying them in olive oil. The quality of the pan is extremely essential, I quote el maestro. Because the pan we have here is not quite non-stick, a lot of oil is added to the frying, which is supposed to be unnecessary.

When potatoes are soft, eggs are added and cooked for a bit till the bottom layer is firm before flipping the contents into a plate. Then the tortilla is slipped back into the pan to cook the other side. Repeat as necessary lol.

The one that I have been waiting for is the paella. First time I tried this was in El Cerdo which was the seafood paella and I wanted to see how that would compare. Well, SCC's version definitely beat them hands down! Though we did compromise with some of the ingredients, and swapped some for local ingredients but still great anyways... 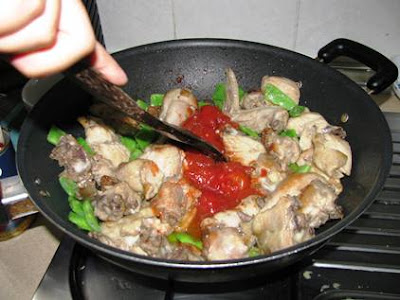 Chicken, honey beans, whole tomatoes, paprika, rosemary and saffron (if available) then cooked with rice. As paella usea Spanish short grain rice (some call it bomba - which holds its shape), so we opted for something more Asian hehehhe.

I think the paella is different from El Cerdo because SCC was trying to re-create the red Paella. Which is derived from the color. Well, you'll see.

And the simplest of all tapas:
Melon wrapped in jamòn strips. 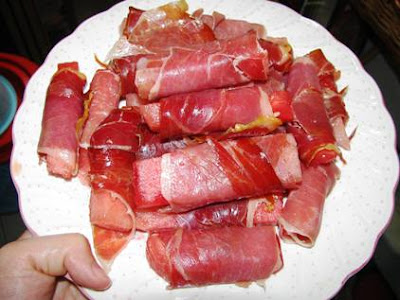 Jamòn is essentially cured ham, or rather like the Italian prosciutto. The ham SCC brought them all the way from Valencia, so the only preparation required is to cut the watermelon into wrap-able sizes and just gulung them in the jamòn strips! Even though I was suffering from extreme coughing but I couldn't help make an exception. The combination of the sweet melon and the salty jamòn is perfect. The ham is a tad chewy for my liking but it's worth a try.

And another tapas prepared- 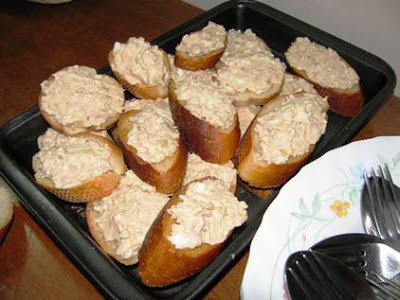 This is another cheat - so easy to prepare. Tuna from can mixed with potatoes, eggs and mayonnaise. Personally I think I would thoroughly enjoy it more with a bit of a Mexican twist - a handful of chopped onions, along a squeeze of lime juice, eh, eh ? ;) Hehehhee Oh and maybe another handful of chopped parsley mmmm! Heavenly with a simple piece of crackers. 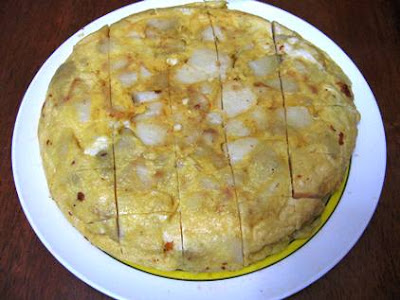 The resulting tortilla. The cooked taters lends the tortilla (well some call it omelette, and I couldn't agree more) a creamy texture... Double thumbs up! 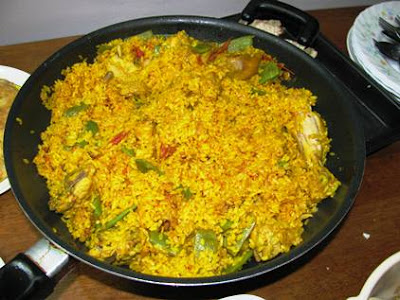 And the anticipated paella!

The paella is given a boost by the rosemary and all those herb giving the very bright colouring. But I suppose this isn't easy to cook, you got to have the right amount of water on top of the rice otherwise the rice would be too hard or too soft. Who wants to be my guinea pig? hehehhe.

And snapped Isabel bb. Everyone was feeding her with all sort of food that I couldn't help but wonder if she's ever going to lose all those baby fat! PCC even fed her with bits of the paella and chicken lol. 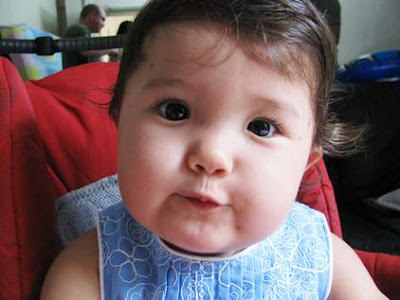 Chubiiii this is currently my laptop desktop background.

Took a nap after being completely drained in the kitchen. Got up and showered, time to doll up (well, doll up in my own terms hahahha) and celebrate the New Year with my close girlfriends.

MY picked me up close to 6 (after texting me saying that she would pick me up at 5:15 hahahhah but she has a very good (albeit long) reason for that.

Dinner at D'Empire Brasserie at Solaris Mont Kiara. I did a bit of googling on the place and it serves Italian food in a 'cozy' ambience. We shall see.

Firstly, we decided to order appetizers, then MY wanted to go to a nearby Digi store to check out the iPhone prices, so we asked the server if it's alright that we leave our table for maybe 20 minutes and she said we can't do that because the table is reserved next at 8pm.

MY was indignant because she was the one who made the reservations and she specifically asked the manager (who was the one who answered her call, poor guy hahahha) whether we could stay on till midnight for the NY Eve celebration and the manager was fine with it, as long as we didn't come late. After a quick check, which was all a misunderstanding, we made our way to the telco store hahahhaha. 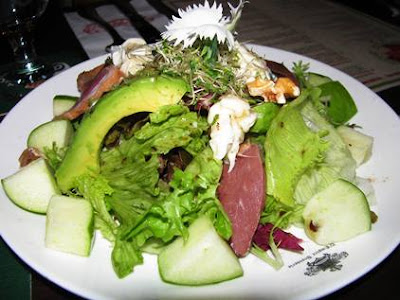 Looks very pretty aye. Love the assorted combination, only gripe I have is the serving which is really small compared to its price. Duck breast also chewy lor.

And well, being the atas crowd we are, we ordered something French to fit our social statuses LOL. 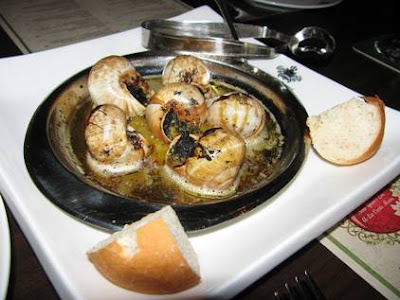 It just says that this dish uses unsalted butter but heck, the gravy sure is not! Extremely garlicky. Snail is nicely cooked but I find the surrounding garlic sauce a tad overwhelming even for a garlic lover like me. 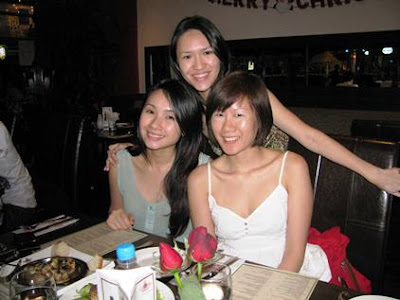 And to share the dinner with a vatful of gossips and giggles without skimping on sarcasm haha how I love these people. Flashback to 2009's New Year's Eve, was also with MY just the two of us romantic dinner and one of the best Italian meals I've ever had.

Later on, those two complained that I don't wear dresses hahahha. Well it completely depends on my mood but I hastily promised them that I would put on a dress the next time we hang out. I'm just praying it's not a paintball session pulak. Damn cialat. 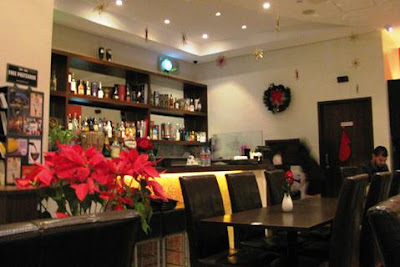 The interior of D'Empire. Another gripe I have about this place, the restaurant is not exactly large and when two patrons are sitting back to back on separate tables, the space for someone to pass through is just barely enough! I had to walk sideways, hold my breath and pull my stomach in to pass through. Yea. D'Empire, change chairs or lose a table or two! The cod fish is a recommended dish. Cod is cooked perfectly and the skin is deliciously crispy! But other than that, the mushroom glace is a bit of a disappointment.... And again, for the price we are paying, the serving size is rather small. How expensive can potatoes or broccoli get?

Oh yes, speaking of which, I really despise restaurants who charge/overcharge for plain water. I mean, they would probably use bottled mineral water then tag it at exorbitant prices of RM6 or RM10 per bottle but heck, when I said I want warm water, I don't mind tap water but don't come saying that we only serve mineral water! I think it's such a cheap way for restaurants to earn a few extra bucks. Boo! Just serve us a glass of water, make it free (cos it's freaking cheap, alright) and make customers happy. Win-win. How difficult can that be?
Grilled Rack of Lamb (RM65)
mint flavoured sauce with roasted potatoes and seasonal vegetables 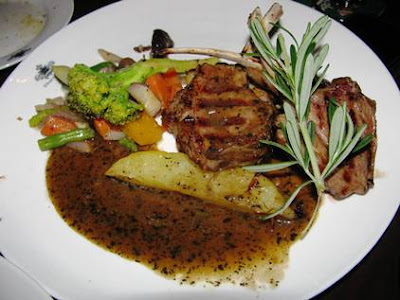 The 'mint-flavoured sauce' is so humble and mediocre that I didn't even realize it is mint sauce until I have finished the lamb, celebrated New Year's Eve, loaded a dump in the loo the next day and blogging about it at 5pm. At least for this lamb, the portion is a bit more worth it. Has about 4 pieces of lamb cutlets.

We were also trying our best to eat as slowly as we can hahahhaha because it was only about 9:30pm and were already finished with our main. 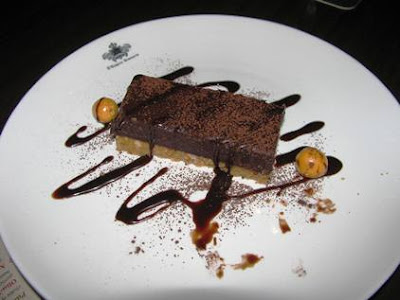 Dessert of Chocolate Mousse Truffle (RM15) or something like that. Didn't come with a description so I'll my best to offer my limited professional opinion of it haha.

The thick chocolate is pretty dense and lies on top of what I assume to be digestive biscuits. The base is not dense so when you cut the chocolate through, the loose base sort of falls apart so it gets a bit annoying to collect them all back on your choc. To me, it's just pretty blah and completely forgettable, unfortunately... Overall, the meals and dessert included feels like they have all been prepared in advance, brought out for whoever orders them, not the 'cooked just for you' type, if you know what I mean. 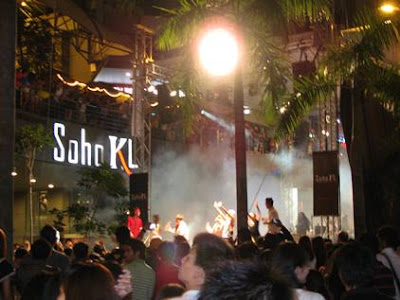 And in the background, a street party is already in full swing. Great crowd here, not too rowdy but sporting enough to dance in the middle of the road hahahha. 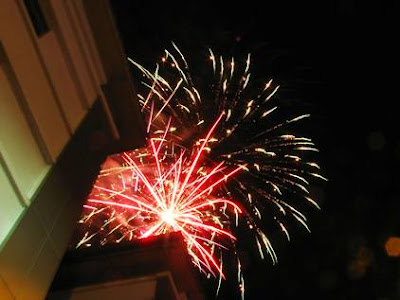 And a measly picture of the fireworks. No big deal.... just another year, right? 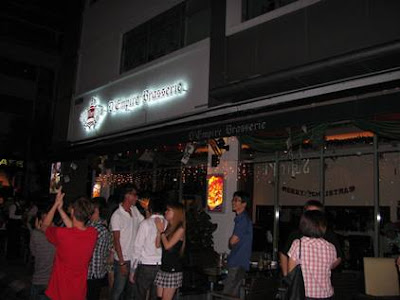 I don't typically make them, but in the spirit of 2011, let's just say that I vow to put in more hard work in my job, gain more control over my emotions, hopefully, and treat people I love with appreciation and love.
Out with the old, in with the new!
Posted by Giffo Hoots at January 01, 2011
Email ThisBlogThis!Share to TwitterShare to FacebookShare to Pinterest
Labels: Bookmarked, Comfort-Homeliness