It was such a chaotic day. Got up on time but by the time most of us were ready, it was supposed to be time that we left SP for Penang. Some more TY's contact lenses dropped and Pickles was gambolling over the room floor.

But no worries. Pretty much happy ending. I think. Reached Straits Quay close to 12:30pm, found a car park real easy (the place is not so commercialized yet ) and made a quick decision to try Agua (yea, yea, whatever ah gua jokes you have in mind, heard them sudah, so let's move on), which serves Mediterranean cuisine with influences from Middle East, Morocco, Spain, France and Italy. 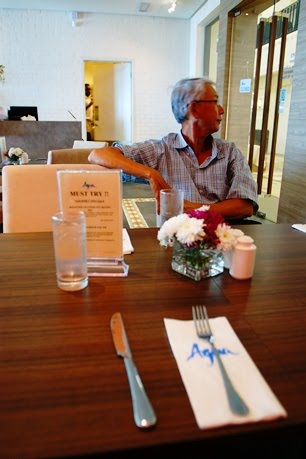 I love Straits Quay. It's clean (for now), the quaint colonial structure of the building is a refreshing sight to the usual squarish shopping malls. I already have my sights set on trying the Irish or German restaurants there once I get the chance. 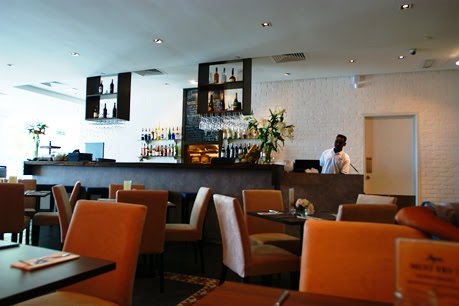 Our waiter is so attentive! He's always checking on us and when he asked TY how is his ginger ale (or whatever it's called), and TY replied that they might have put in lime juice instead of ginger, he politely scooped the glass from under TY's nose and zipped over to the bar to get TY the right drink. Efficient, I loike! And most pleasantly surprising of all, the restaurant does not apply service charges.

As this is an atas restaurant, the main courses would set you back at RM40-50 per entree. They also provide set lunches, which Mom and Dad took of each. 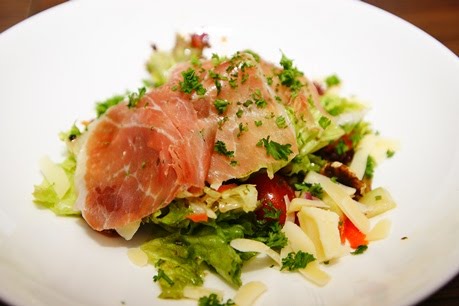 Dad's Salad Agua. Fresh market salad with Serrano ham, walnuts, cheese and house dressing. I must say that this is quite an acquired taste. The cheese emits a strong smell and Dad could take no more than a couple bites from it hehe.

So he and Mom exchanged appetizers. lol. 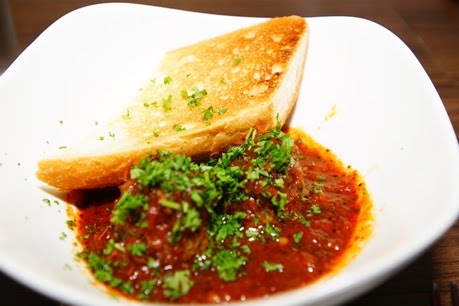 Mom's Albondigas. Spanish meatballs in piquante tomato sauce. It's a sort of safe dish to me, though it may just simply be that I don't have a chef's sensitive tongue :p Well, mom likes it.

TY and I both shared an appetizer, and the day's special because I didn't feel like having too much, which is normally the case when I will be traveling. 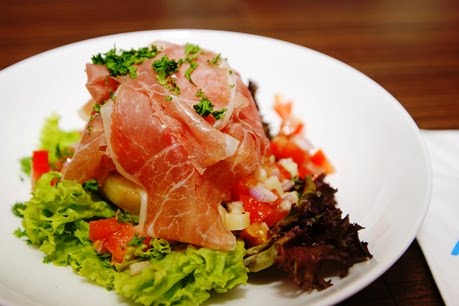 So I ordered an Artichoke Bottom topped with tomato, serrano ham and manchego cheese. Dressing is similar to Dad's Salad Agua but the greens they use are really fresh and I love the combination of the salty serrano ham with the crisp crunch of the salad leaves and the softness of the cheese and tomatoes. First time trying artichokes too! Not exactly blown away by its taste and texture, but so far so good... 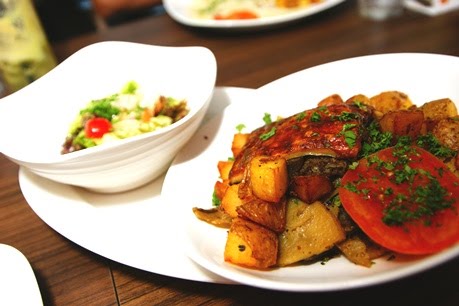 Without doubt, I honestly think that this is the best of the three main dishes we ordered that day (a bit of a spoiler, this being the first main to be introduced... oh well). I just love how rich the taste of the different herbs and spices together transforming the minced lamb. While we were eating, I was confused as to what other ingredients that makes up the dish but after blogging and going through the menu only did I realize they are aubergines -.- Yummy regardless.

Oh and I must gush over the fried potatoes! The name itself may sound icky but how can anyone not love the crispy outer layer of the potato and the soft, crumbling insides? :D 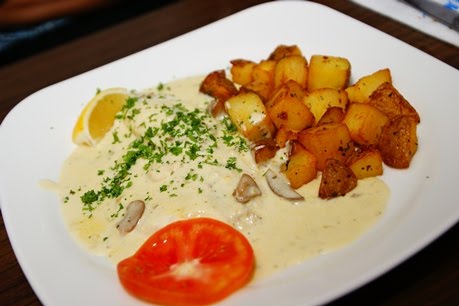 Dad's Fillet of Fish (typical dad) St Tropez, pan fried with herbs, garlic, white wine reduction and cream. Dad's comments were oklah heheheh typical dad! Resistant to changes from his usual meals. He must have felt like the whole lunch thingy is a waste of money on food he doesn't appreciate :p I tried some of his fish and I'd say the fish is quite fresh, and the cream sauce is quite rich too. 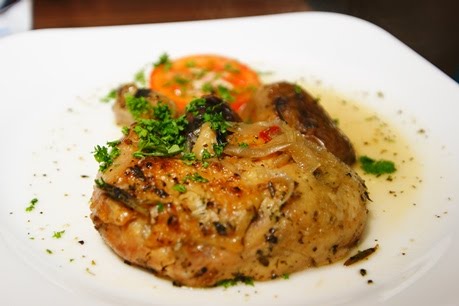 Mom's Andalucian Chicken. Baked chicken, with onions and red capsicum, white wine and served with potatoes. Again, not Mum's type too. Says that it just tastes like steamed chicken of sort. I think Agua is doing this on purpose. Lousy-fying the set lunch menus but upping the oomph on the special ala cartes. But I have to agree with Mum on the Andalucian chicken. Takde oomph. 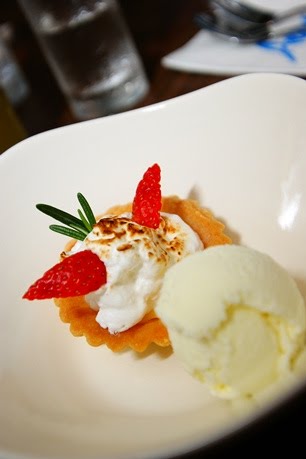 Don't you just loooove how they presented the desserts??

Lemon Meringue Pie. Individual Tart with Vanilla ice-cream. By the way, the waiter pronounced 'meringue' as 'merenge' kekekkke someone needs to extend their F&B in-house training! 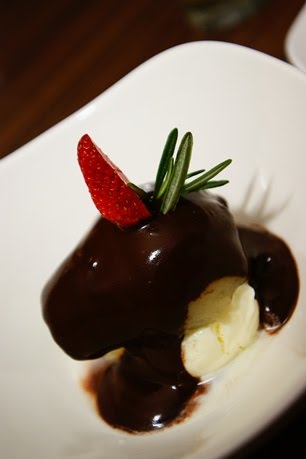 And I decided to order something I have not tried before. Oranges in Caramel with Red Wine Sauce. (with red wine, cinnamon and cloves). 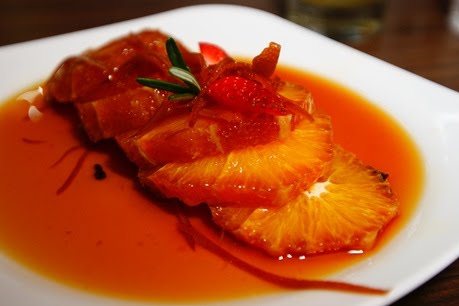 It's pretty and all but I don't quite like the overwhelming spices Agua used to create this. It's slightly bitter, sweet and the cinnamon/cloves is overpowering everything else. And you know what, I've come to a conclusion that I shall not visit another Middle Eastern/Greek-influenced restaurant again (I think). Especially the Middle Eastern part. I've tried them with an open heart, open mind and open mouth but I just can't seem to enjoy or even understand the 'culinary logic' in their tastes. Ah well, did I say happy ending? Only half true. 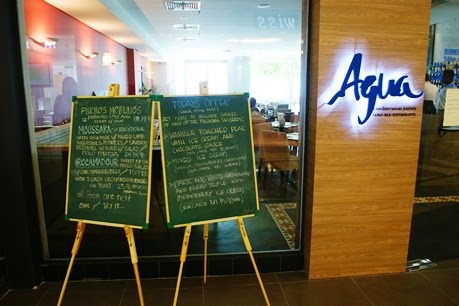 Bill came close to RM200 for the four of us, left a small tip for the waiter (what? I also need cari makan ohkayyyyy), only had enough time to bring Mum & Dad out on the quay for a glimpse and a shot before jostling back to the car. 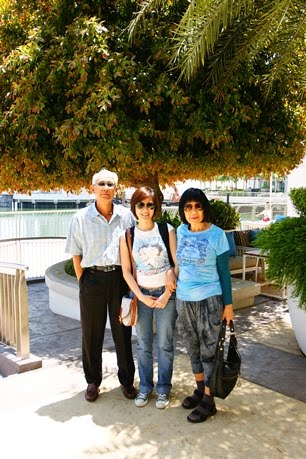 Oh, happy ending cos I managed to check into my flight on time.