Wah! Got so many things I need to blog about but not enough time! Sigh.... Admittedly, they are  predominantly gastronomic-related posts hehehe....

Back to business! Kong-ed out on the not-too-comfy beds at 2am. My roomie Phy couldn't stop talking! lol. In a cute way. I had my alarm set at 6:45am. Simply because I take longer time to get ready in the morning. 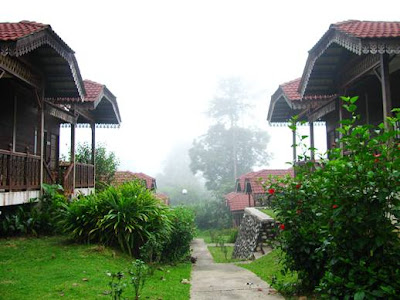 The morning air was crisp and foggy! I love foggy mornings hehehe... Brings back the good memories of Maxwell Hill. Sigh. 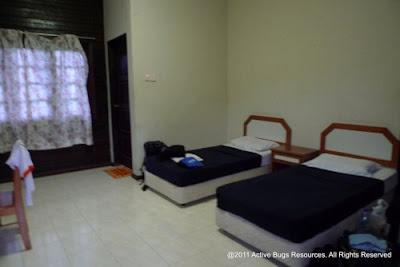 Oh. Another shot from Justin. It kinda looks fancy here in this wide angle shot la. But the beds in our room right, one has a Pooh bear mattress cover and this gross pink blanket lol. Mine was somewhat off-white though. lol. 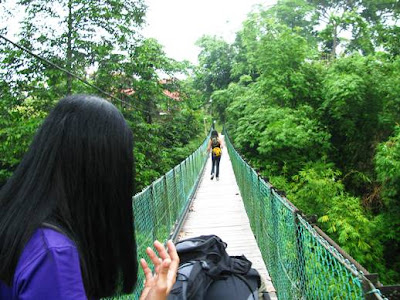 The ghostly image on the left is Mimi hehehe. And that's Phy scuttling as fast as she could across the canopy walkway that we have to cross every time we get to/back from the resort. 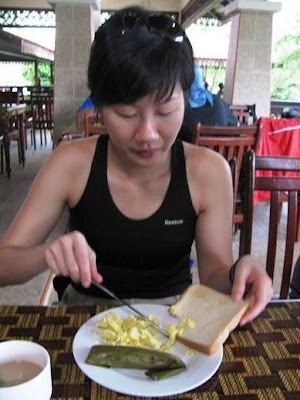 Breakfast at the Pesona resort lodge...  sucks, big time! lol. It appears that the owners have never had so many visitors and they kept running out of food. I simply had toasted bread with scrambled eggs (which the whole plate was gone within 5 minutes it was served) and this weird-looking pulut which all of us could go no further than two spoonfuls.

Day 2 itinerary: Trek and walk across the canopy walkway (which Taman Negara claims to be the longest in the world (which I kind of doubt its credibility), then hike up to the Bukit Terisik, get back to the resort for lunch, and off for rapid shooting LOL. 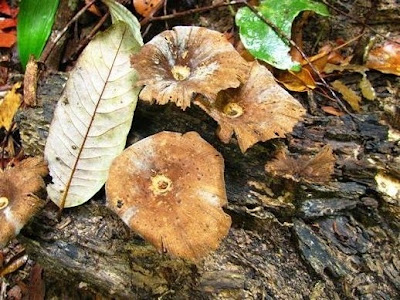 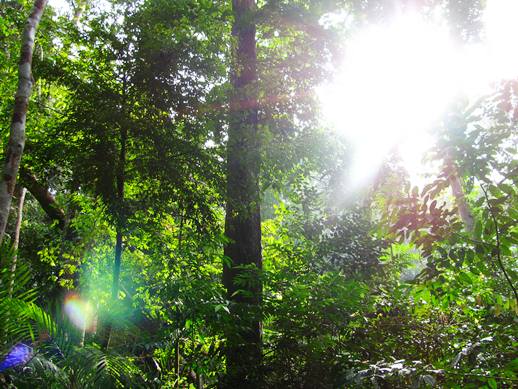 Nice not this shot! :D 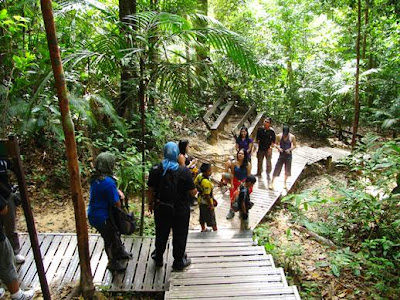 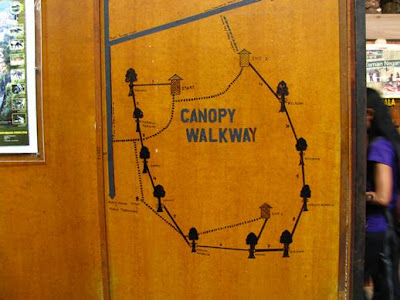 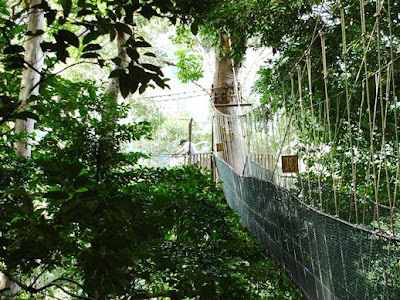 It was still early, and most fortunately we were scheduled to get on the walkway in the morning because, due to the limitations of  the number of people allowed at each station, more and more people were stuck at the entrance because they just weren't allowed on to the canopy walkway yet. 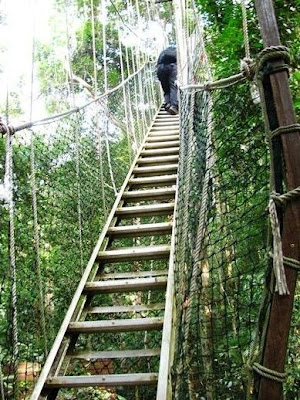 The walkway was pretty fun la coz of the company. But it could otherwise have been boring. I think I need my walking encyclopaedia aka Ah Huat to make it more interesting lol. 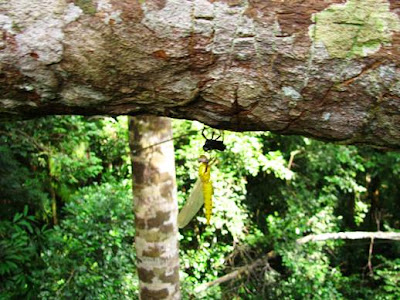 A large fluorescent dragonfly feeding on a dead dragonfly. Gross. Shot taken from Justin's cam too. When all of us completed the one-hour walk, we started on hiking and trekking through the 130 million years old tropical rainforest. How great it was to be able to hike again, after the long hiatus! How I missed the days when I trained for Mount Kinabalu... 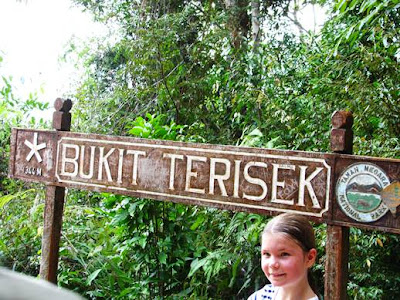 After a slow hour-and-half hike, we reached the peak of Bukit Terisek. We were awarded with this view... 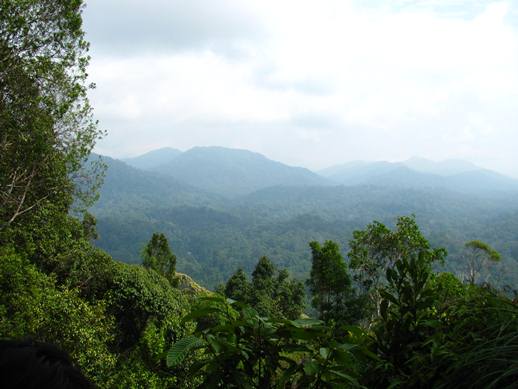 The tallest peak is the Mount Tahan. One of the toughest mountains to hike in Malaysia. Even tougher than the highest peak Kinabalu because you have to carry your own necessities/camp/tents/water etc and the entire hike is supposed to take about 4-5 days. Stim.

We made our way downhill again, which was a lot faster hehehe thanks to gravity and we were ferry-ed back to the floating restaurant by 12:30pm, just in time for lunch. 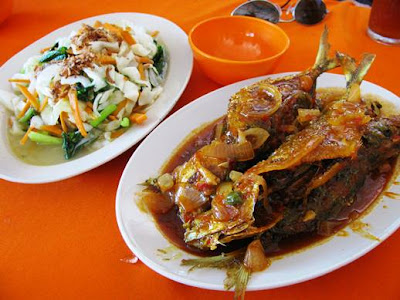 The lunch affair was by leaps and bounds better than the dinner the night before! Stir-fried mixed vegetables and this yummy sweet and sour deep fried fish with onions. It was oh-so-good surprisingly lol. 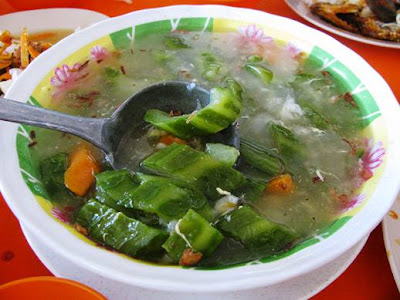 And they also served this soup of cucumber with tomatoes lol. It's not bad la really. But for me, I'm just happy with more fibre servings.

Since we have time to kill before the next activity, we decided to head back to the resort, and chillax first before heading for rapid shooting. Ended up talking some more to the chatterbox hehehe. Oh, and the walls at Pesona are thin! Mimi teased us that she could hear every word we were gossiping about! 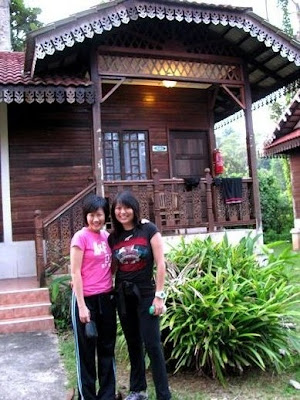 
After a quick change into our 'swimming' things, we were off in the boat again. We first went on a short visit at the orang asli settlement. We also witnessed how they create fire, which is an extremely important skill for the orang aslis if they wish to get married.

Then we got back to the boat for rapid shooting and I asked Justin, what rapid shooting is supposed to be about and he said, we are going against the rapids so ok lor and anyways we were all prepared to get wet.

But it was so lame! In truth, it is quite unlikely to get wet doing this rapid shooting. However, ALL of us got drenched at varying degrees, simply because a few kacau people who dip their hands into the river and got us all splashed from the waves! 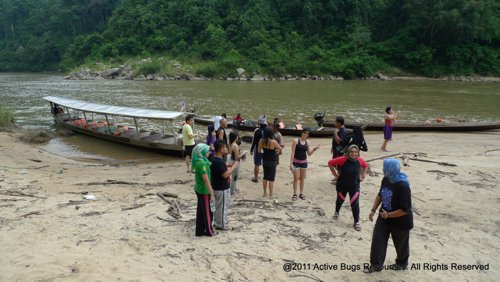 When we reached a riverbank which we nicknamed Tarzan (you'll see why later), we were all soaked! There was a couple in the same boat as us, but not part of our group who fell victims to our deeply ingrained wish to soak everyone else. Poor them hehehe. 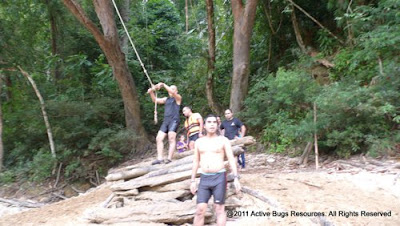 The Tarzan swing! You climb up onto these pile of wood, grab onto the rope and swing forwards before letting go and you are supposed to fall into the river. Problem was, the distance between the pile of wood to the river is a good 8 meters or so. I actually witnessed one of the kids from our group who fell flat on his tummy and cut his lip because he let go of the rope too soon! It was quite traumatizing for me to watch and I didn't want to go on the Tarzan rope until much persuasion. Well, it was fun la lol and I ended going on it twice :D


We left soon after and trooped back to the resort for a much needed scrubbing hehehe. Then it was back to the floating restaurant for dinner. The night's menu: chicken in soy sauce, stir-fried taugeh with tau fu pok and stir fried long beans with eggs. 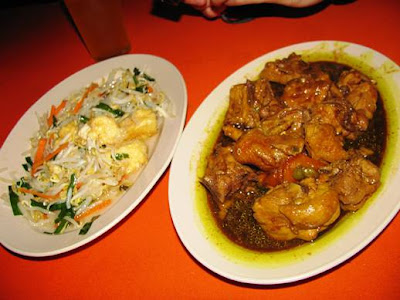 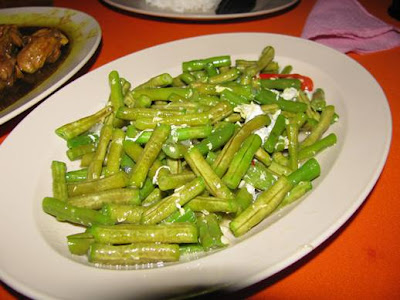 Initially some of us wanted to go on a 4WD ride through the forest in the hopes of viewing more wildlife. But we were told that sights of wildlife are not guaranteed and it was also kinda pricey, about RM30 per person for an hour  ride. So we decided to forgo that, and instead content ourselves by gathering our seats and tables from the resort and arranging them right in the centre of the walkway, and just eating and talking the night away. It was really pleasant. the night air was cool, and we had plenty to munch on hehehe.

The next morning, we were up early again, packed our things and were ready to leave the park by 9am. Took the looooong boat ride again but this time we were going downstream so it was faster than the time we were heading towards Taman Negara.

Downstream or not, it was still close to two-and-a-half hour's ride! By the time it was close to the second hour, one of the guys in our group asked the boatman to stop at one side of the riverbank so some of us could relieve ourselves.

And yours truly was one of them. In the jungle. Au naturale. :S Had to do it quick some more scared got orang asli popping out of nowhere lol some more paranoid got spirits or something! Some more got ants! Rofl. ok I shall not spare too much details, but rest assured that no ants were harmed in the process. I think.


Had lunch at the KNS cafe again (wait, I think it's called NKS) and before long, it was time to head back to the bustling city again... :( Someone in the group asked to stop for durians along the way, if we see any. But before that Justin brought us to this cendol place where they would usually go when they're biking! 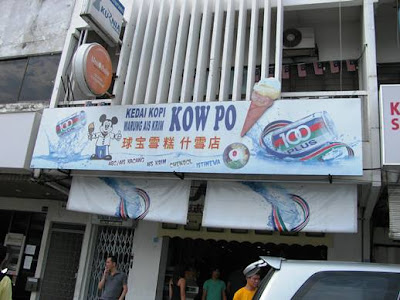 It's supposed to be a really popular place in Pahang. If it involves food, I'm keen! ;) 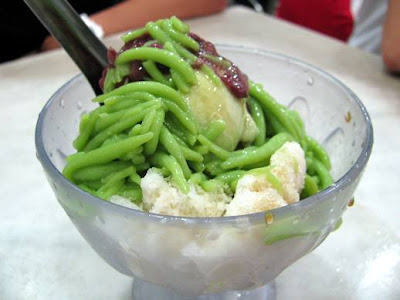 So I ordered this cendol and they included a scoop of pandan ice-cream. My verdict? I still think Penang Road serves better kick ass cendol! But Phy ordered a peanut ice-cream and I tried, it was really good! But I don't think this place is gonna induce any craving from me anytime soon... 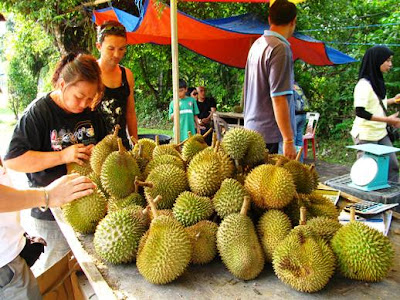 Found durians before getting out onto the highway! There was this huge sign that says Mu Sang King lol. It's like another breed of durian or something la. Anyways, I'm not really big on durians, but since everyone else in the ride I'm in are having it, I'd have to join 'em. 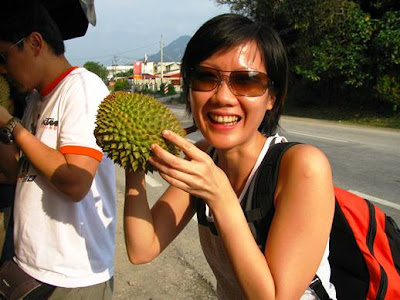 Justin forced to to take a shot with a durian lol. Don't ask why :p 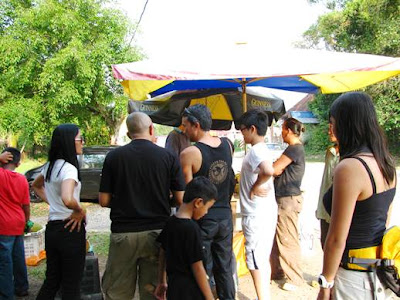 Finally reached KL sometime 6 or 7... Well, in any case, I can finally proudly tell tourists to Malaysia, what Taman Negara is all about, first hand ;)
Posted by Giffo Hoots at August 14, 2011
Email ThisBlogThis!Share to TwitterShare to FacebookShare to Pinterest
Labels: Sweaty Sticky Stinky, Trips