Knowing that I only have about 2 months left in KL, I knew that this is the only chance I will ever get to try out everything and anything at all - hence when Active Bugs invited me to Taman Negara, I thought, what the heck.

Never really had any inclination for Taman Negara, but it seems a bit silly to be a Malaysian and not knowing what the place holds. Worse still if some random foreigner approaches me and asks what's in Taman Negara and I can't answer hehehe.

Anyways, long story short, after a breakfast of McDonald's pancakes, hash brown and sub-standard coffee, then a two-hour drive later, and a second breakfast of roti kosong with 100 plus and another half hour's drive, we arrived Jerantut. 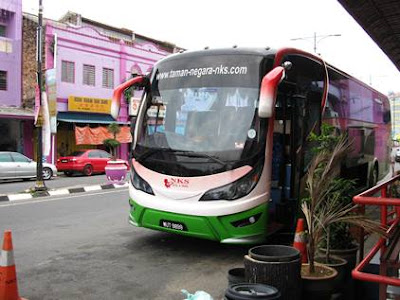 fg
After offloading our things from the cars, we headed into this double shop lot called NKS Hostel/Travel  (like, if you read fast enough, it's almost like KNS kekekke) which arranges transport and accommodation to Taman Negara. Here, we were told that the bus will only be taking us at around 2pm. 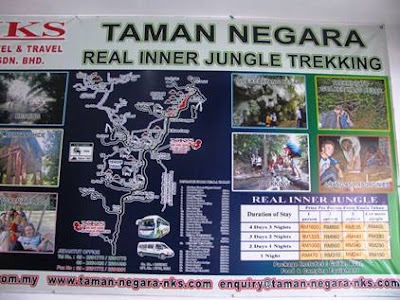 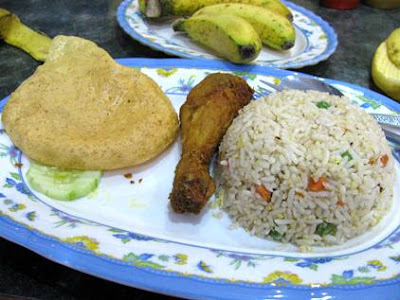 KNS also serves lunch - fried rice with fried chicken and fried pappadom. Doesn't look very appetizing here, but it was good! Cleaned the plate hehehhe. Oh there's free flow of bananas too but I only later found out that it was paid for lol. 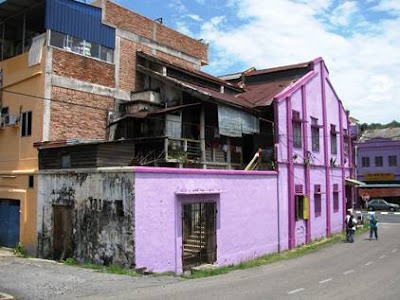 Random house/shop house by the street. 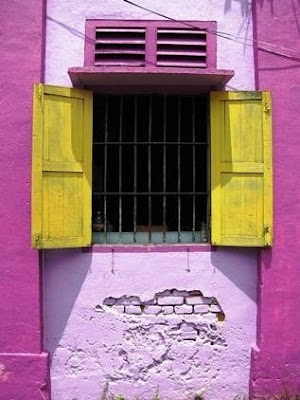 Finally, the bus picked us all up. Strangely, we locals made up only 20 percent of the group heading for Taman Negara. The others were ang mohs. The ride towards the river jetty took only about 15 minutes or so.

Presenting the teh-tarik-coloured Sungai Tembeling! Lol.... Initially I was sort of grossed out by its colour. But I only found out later the muddy brown wasn't exactly due to pollution, but upstream logging that mud-ifies the river. 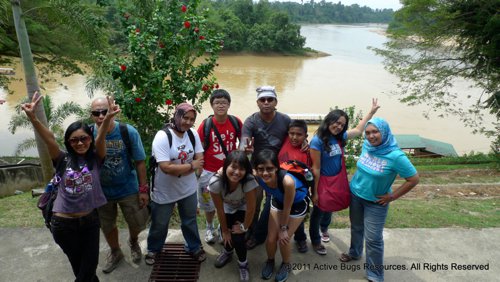 A group shot of the others! Great people there, Mimi and hubby Hisham, Soy, Sean, Phy, Sani, Cikgu Siti and Yani :) Some photos taken from Active Bugs :D 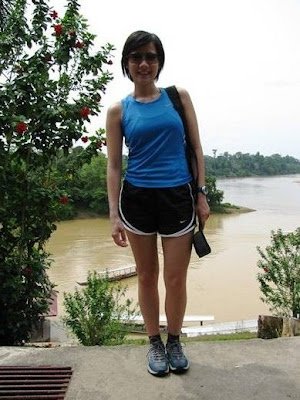 When the others saw me wearing this gear, they asked, going for marathon ah? Lol. 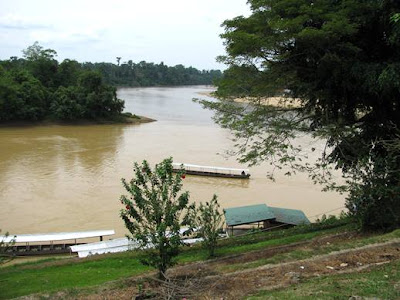 The guide who assigns everyone to their boats is kinda rude. Shouting like we all owe him a hefty sum of money. But that aside, the boat is pretty cool leh! The back support is slightly declined and they even lapik this cushion on the seats! As the boat heads upstream, the ride wasn't that fast but still a gentle breeze kept us all cool against the drone of the engine. I commented to Justin, that they should really consider serving piña colada or mojito hehehheheh. Could really use that since this being a 3-hour boat ride and all. 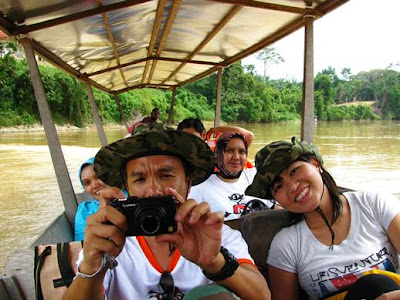 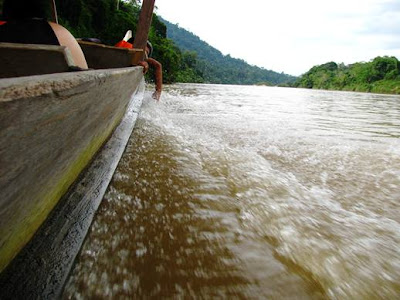 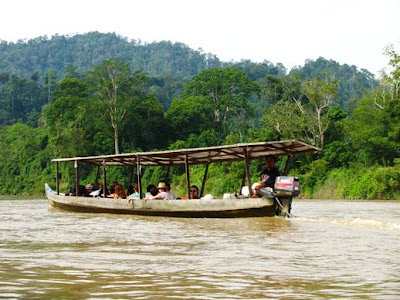 Amidst that excitement, tragedy struck. Ok, that was a bit exaggerating but it's still kinda unfortunate la. We noticed that our boat engine kept dying and our boatman had to restart it a few times. Until the boat behind us also overtook us.

After a few rounds of having to reignite the engine, the boatman from the other boat asked our boat to pull over while they sort of checked on the engine. Then they decided to move half of the occupants on our boat to the other one, including our things.

And I thought that was it, until they hooked a long line of rope from their boat to ours! Lol... boat towing pulak this. So after ten minutes or so of towing, finally the boatmen decided that our boat is too heavy and all of us ended up shifting and squeezing with the others to Boat #2! I think there was at least 32 of  us there on that boat. Boat #1 was ditched on the river bank.

At this point also, some mindless fler went and turned on his iPad and started playing games on it. Which I am fine with BUT he had the volume turned on full, no doubt. I hate it so much when I am out, trying to get away from the hustle and bustle of the city and these jerks have got to bring my peace crashing down. 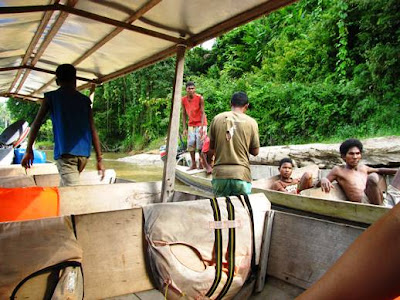 Some of the orang asli or aborigines that we bumped into along the way... Have never seen these people before. Apparently they are of the Batek tribe. 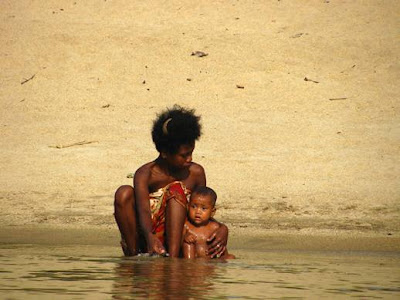 Our boat passing by this mother bathing her baby. Wonder how tough life must have been on them. They do not even have access to clean water, and instead have to resort to bathing their children in this teh tarik river... 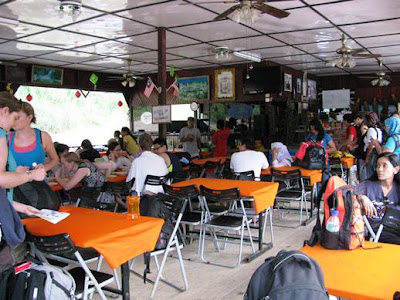 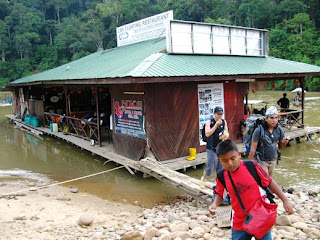 We had to walk and hike up a small hill for almost 5-10 minutes before reaching a tarred road, and from there a van and a 4WD picked us up for another 5-10 minutes ride to our resort... Heheheh some of us climbed into the back of the 4WD so that we can get the wind whipping at  our faces. The breeze from the surrounding forest is so cooling and refreshing. A far cry from the city air!

By that time, it was already close to 7pm. Justin advised us not to shower, and instead, drop our things at the room and head out for dinner back at the floating restaurant and then embark on a Night Walk of the jungle trail afterwards. 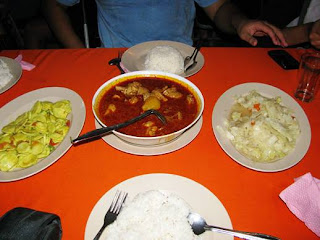 The not-so-appetizing dinner. 3 dishes shared between four of us. Curry chicken with taters, stir fried cabbage and this funky sliced fishball thing that is just weird. Rice was too hard and dry, and after dinner I experienced a mildly uncomfortable indigestion...

Night walk! The kiasu in me packed my trusty mozzie repellent (also a leech repellent), donned on a pair of long pants and tucked the ends neatly into my socks hehehhehe. Don't want those unpleasant leeches anywhere near me!

I didn't bring any torchlight but Phy was kind enough to lend me one of her extra. I wasn't really expecting much to see on this walk but I was quite shocked to see our first visitor! 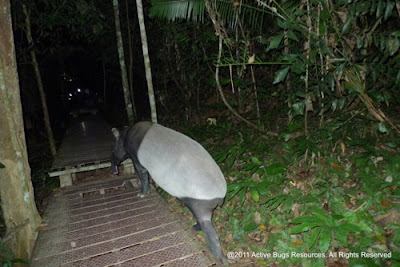 This ultra fat tapir! LOL. This fler got another friend also la. Initially I heard rustling somewhere behind a huge tree and suddenly these two just charged out of it hehehe. They're really huge! But they're harmless :) 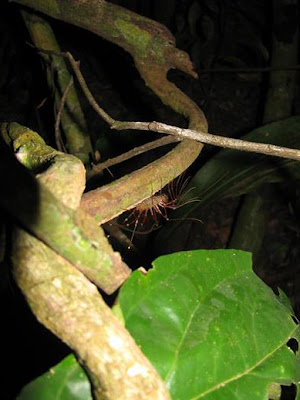 It's just too bad that Evan could not make it on this trip. Otherwise I think he'd go crazy over the range of insects the park provides. And I wish I could have some sort of info or revelation on these insects instead of just categorizing them into 'spiders' or 'centipede' lol. Evan would spurt the scientific names and count off its distinctive features plus characteristics.

I missed you Evan! 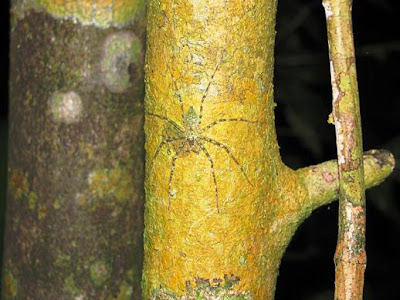 This spider that looked like it was smacked flat to the bark of a tree hehehe.... Pretty much that's all I took during the night walk.... oh we did see a few deers too, but in a distance. The guide would flash his very strong flashlights and somewhat blind the deers that they froze.

I was a bit sad though that the tourists were all noisy and had no respect whatsoever for the wildlife. Laughing and shouting zzz. Okie la, I'm really tired. Will continue the subsequent post after this :D