Right after a work stint in the North Sea, I spent a couple of days exploring the islands and fjords surrounding Florø. Small town Florø is also the westernmost town of Norway and the administrative town of the municipal Sogn og Fjordane. This is a region completely unfamiliar to me (even most Norwegians have not been), so asking around my Norwegian colleagues did not bear any fruit.

The tourist information center (Visit FjordKysten), on the other hand, are a helpful lot. Their replies were prompt and personalized. They also helped to draft an itinerary for me! And afterwards, a week after my trip, they emailed to check how my trip was.

I left early in the morning to catch the 8:30am express boat. The town was still quiet and wet from a shower the night before. The Norled express boat arrived 2-4 minutes later than scheduled but boy, I was bowled over by the sleekness of the boat. 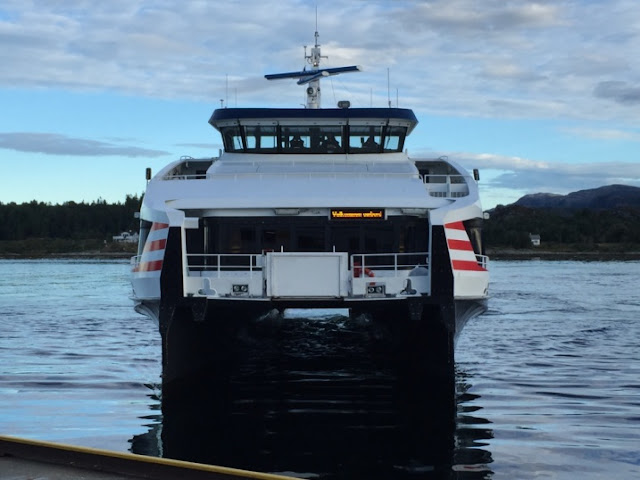 Boarding is fuss-free: a hydraulic gangway lowered smoothly onto the harbour. The gangway is sturdy and wide enough for wheelchair-bound passengers to board without much help from the crew. Great way to travel if you have large suitcases or a bicycle.
They also make trips to Bergen and Oslo. Loved the boat, super fast and comfortable with a little canteen onboard.

The layout of the boat makes perfect logic too, a large area for storing bags and bicycles greets you once you arrive onboard. You then purchase your tickets once you've sorted with your luggage - none of that pre-buying tickets on land and frantic searching of tickets when they are checked onboard. Tickets are only checked when passengers are getting off - with a handy barcode scanner. 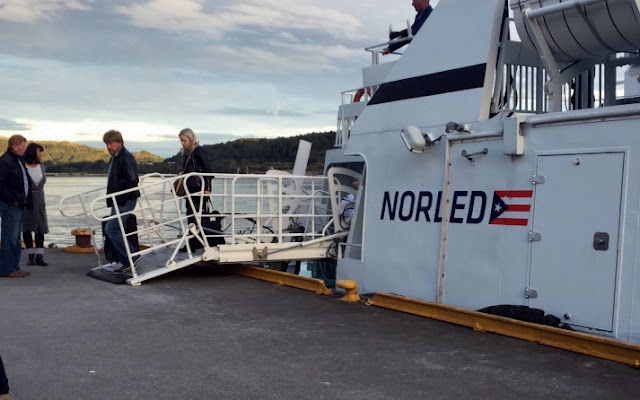 The journey to Askvoll took about 40mins, and there, another ferry was waiting for me (literally, just waiting for me to board. As soon as I was safely aboard, the gangway lifted). It's all pretty seamless, I just have to notify the Norled expressboat that I am heading to Værlandet so the ferry in Askvoll waits for me.

The second ferry was less shiny, and took a little more than an hour to Værlandet... I had a grand time sitting out on the top deck, with a great view of passing fjords and islands... until it got too chilly.

We chugged and arrived Værlandet just after 10am - it was beautiful with the sun just barely peeking. Temperature in low teens - couldn't ask for more!

A bike rental is available just at the harbour - manned by a very nice and friendly guy. I asked if I needed a bike lock but he smiled and say just leave it out by the roadside, no problem. Hired a cross-bike (some USD20 a day, if I remember correctly) and then popped into the small convenient store for some Noggie nosh - waffle and brown cheese, heh. 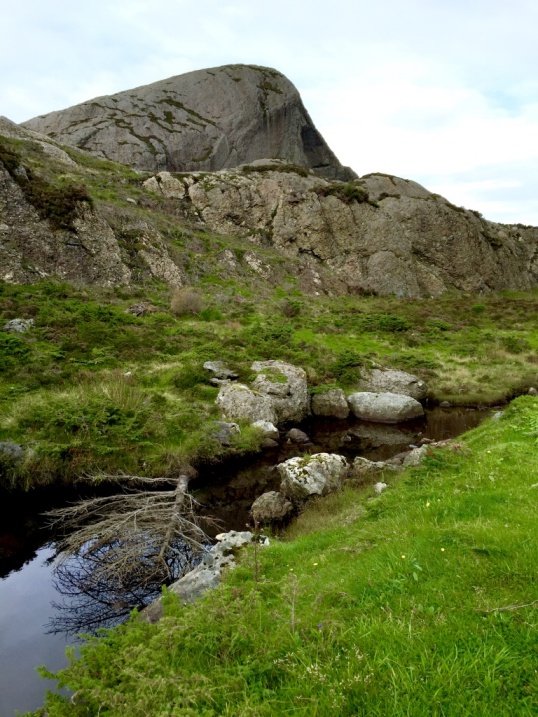 I can't remember the last time I was so excited to be out on a bicycle - on my own! Granted, much of that feeling has everything to do with being cooped in an enclosed vessel for 5 weeks at a time. That whoosh of crisp, fresh air and actually putting my legs to use - is bliss.

The roads are in a good condition  - would have been great if I had a road bike with me :-) (yes, I acknowledge the snob roadie talking). Barely any cars on the road, though I did attract a number of stares - foreigner on a bicycle. That's as touristy as it gets, just me. 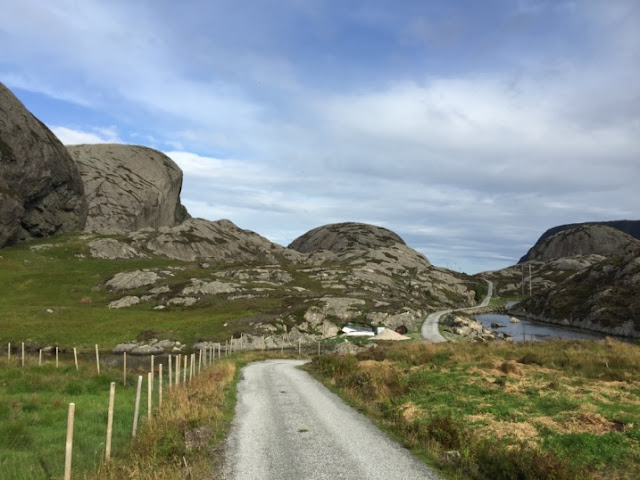 The day's ride started out sunny and gradually more clouds rolled in.... as long as it isn't raining, I'm a happy camper! 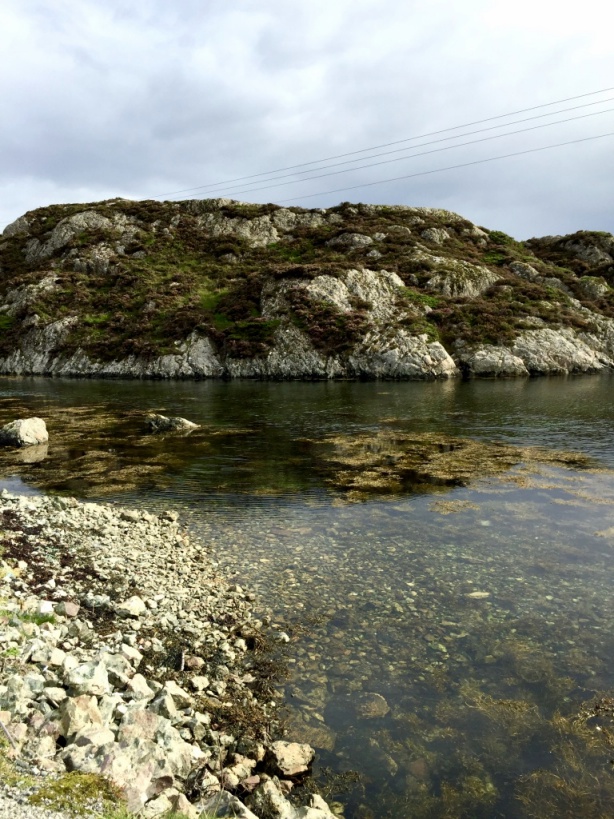 Never a dull moment with these stunning views - makes me wish that I live here!

Værlandet to Bulandet is surrounded by a number of small islands, and connected by a series of six bridges. It's darned intimidating cycling on the bridges with the waves beneath furiously crashing and breaking on jagged stones. Beautiful, but eerie at the same time. 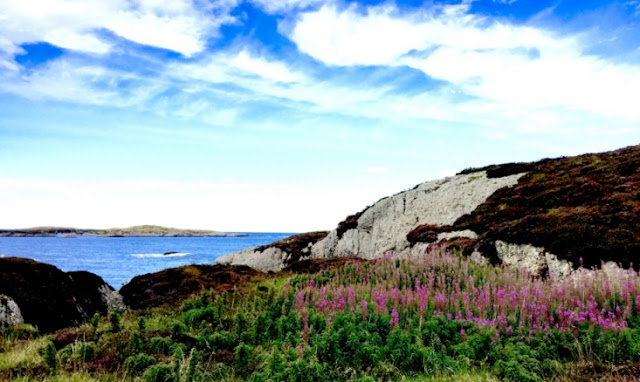 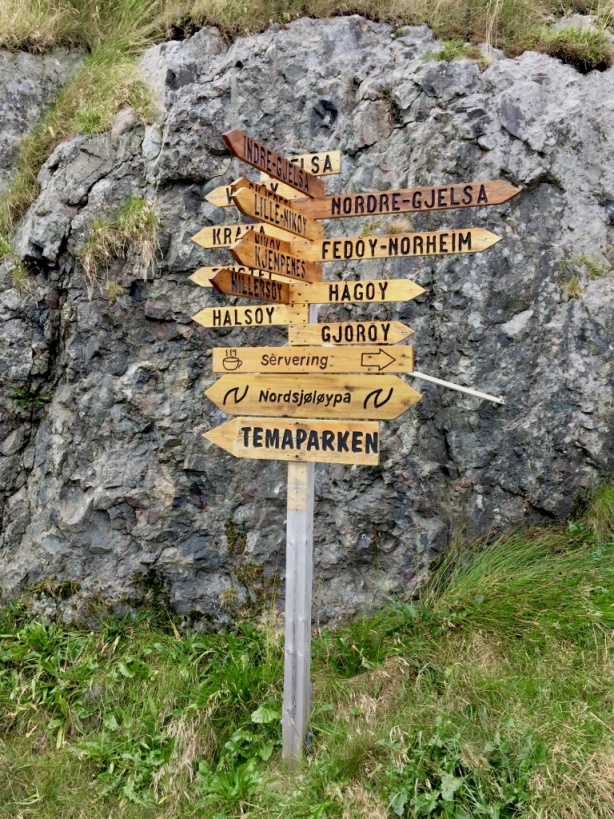 Can you pronounce these places correctly? ;-)

While it is a joy to trek these wonderful and beautifully kept parks (at no charge!), the same cannot be said for meals - they do and will burn a hole in your pocket! 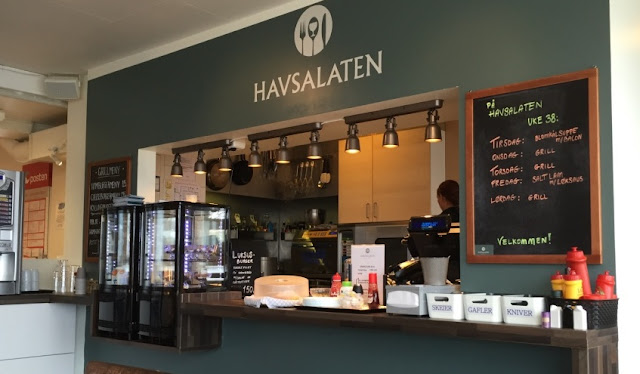 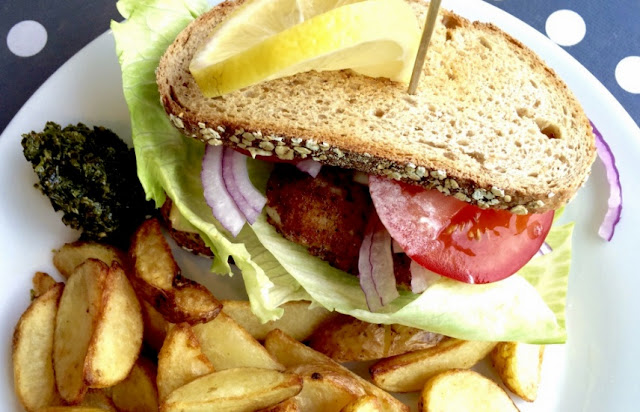 The Havsalaten cafe is nested within a grocery store in Bulandet, and has seats overlooking the waterways. I chose to sit indoors though, it was still too chilly for me to be sitting outside, and besides, I prefer to have my meal warm before it is finished.

The cafe also grows their own seaweed (the black-green glob on the left). I quite like it - was slightly crunchy with a touch of heat.

And then on the way back: 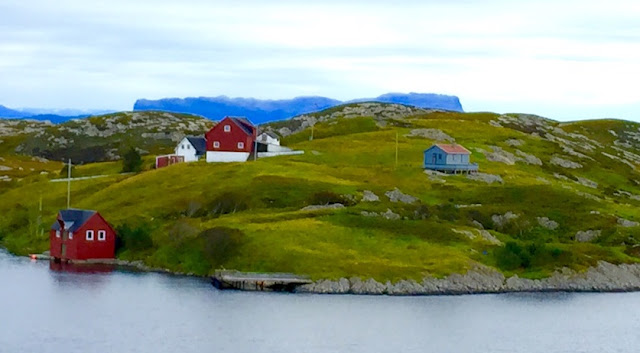 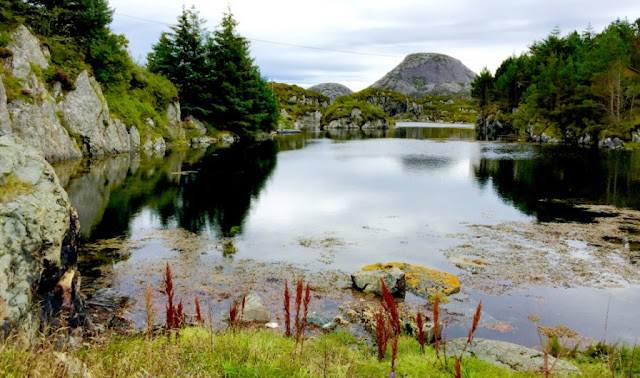 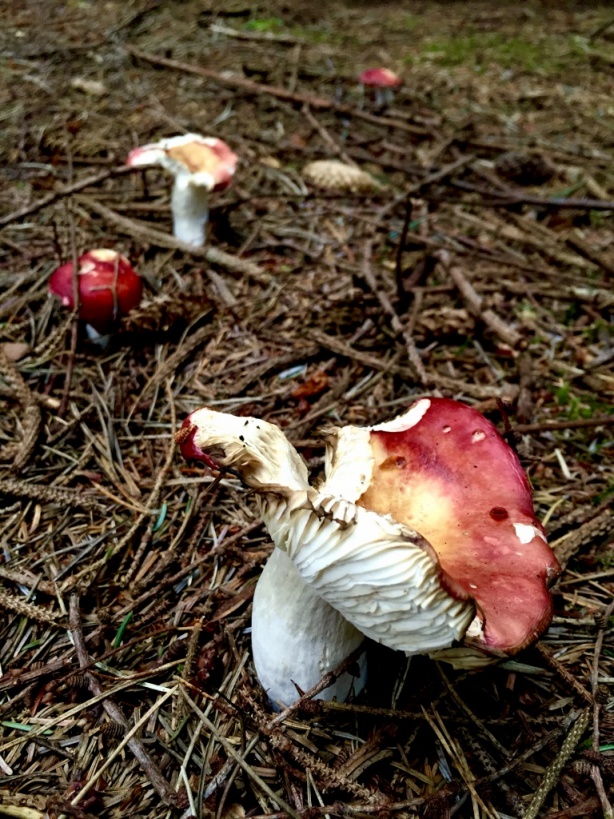 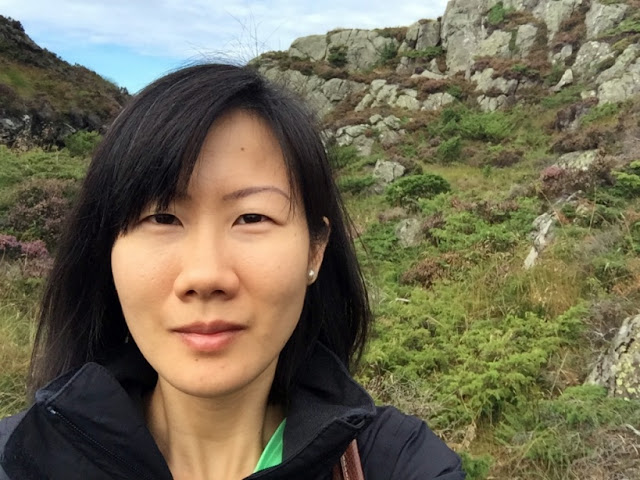 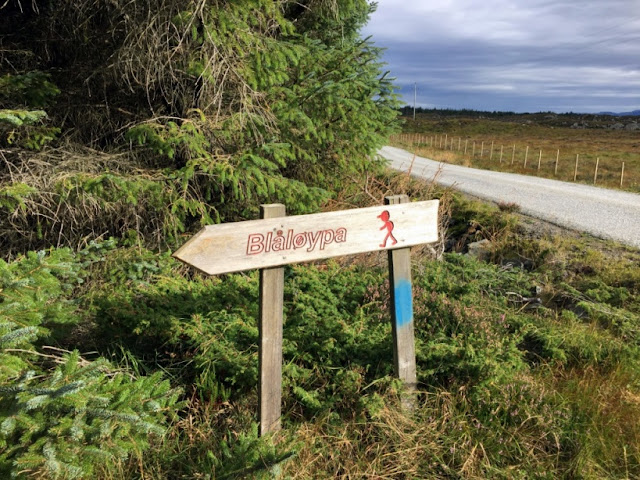 I just can't say how much I love the parks here - they are very well-maintained, clean with plenty of signs so you won't get lost. The ground is soft and mossy, cushioning and absorbing any noise. The forest is silent except for the rustling of leaves from the breeze and the occasional chirping. Not trying to paint a romantic scene here, but it is what it is! 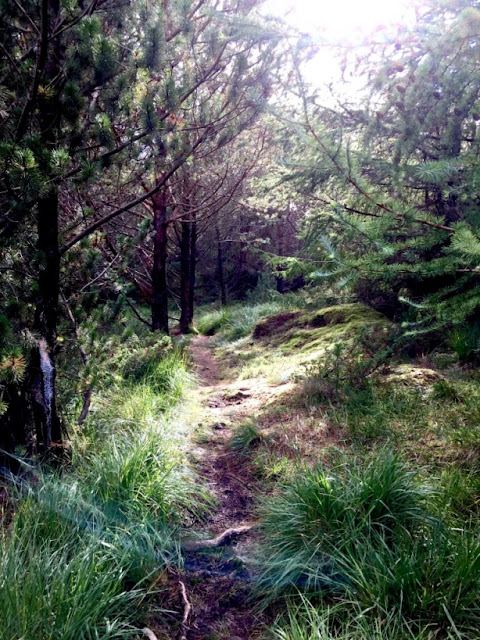 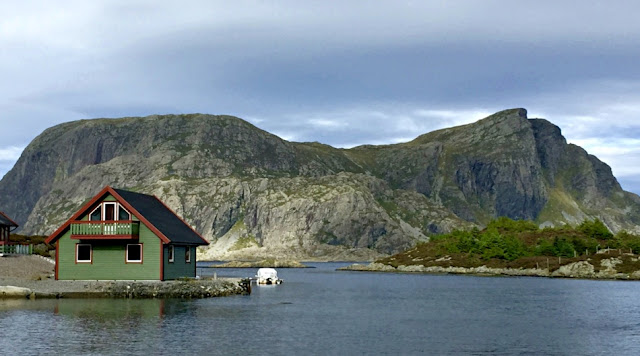 I loved the cycling, but I preferred the trekking into forests. It's a damn shame that I had to leave by 2ish to make it for the return ferry. I did milk all the time I could spend in Værlandet, though! I must have trekked 3 different trails (wanted to hike up the highest point in Værlandet but didn't have enough time), plus the round island cycling - a day most well spent.

Back to Askvoll where earlier in the day I spent a grand total of 2 minutes running from the expressboat to the ferry. I had 1.5 hours to spare till the returning expressboat arrives.

Askvoll is another small but picturesque island, with too many of expensive yachts around. 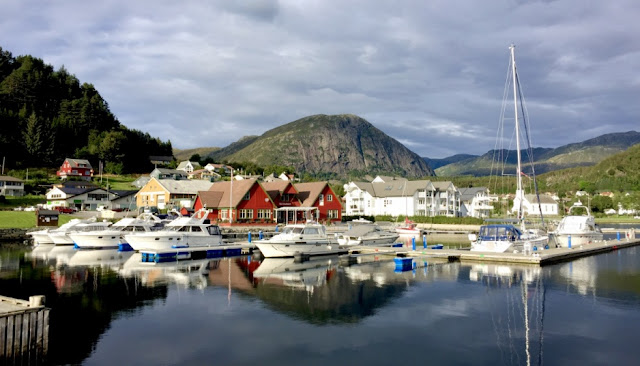 Here I found a few more trekking trails - the shortest one is 2km round trip. I started on the trek but wasn't sure if I could finish the loop in time for the ferry (couldn't possibly risk it as I have a flight the next day, and that was the last ferry for the day), so I aborted the trek and made a U-turn back (when in doubt, chicken out). The trek was most pretty though, and I was determined to return some day and finish it!

Back in Florø, finished a great day with a fish soup (I know it sounds gross but it's heavenly!) and a local brew- 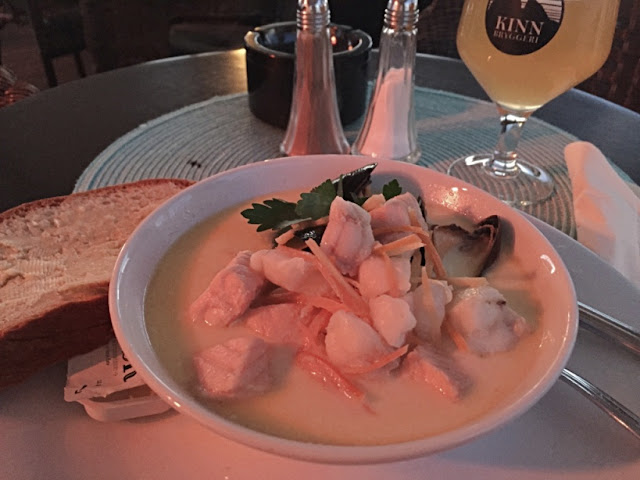 Fish cuts, mussels, scallops, squid and some root vegetables in a warm, creamy broth on a cold night. Now, what's there not to like?
Posted by Su Yin at December 11, 2015
Email ThisBlogThis!Share to TwitterShare to FacebookShare to Pinterest
Labels: Around the world - Europe, Sweaty Sticky Stinky
Location: Værlandet, Norway