On the second week of my first year at USM, I received a message from a senior, who was a PPMS (Pembimbing Pelajar Minggu SuaiKenal-I think) and knew of my interest in swimming. He suggested that I take up a certain Lifesaving Course. Encouraged by the sound of it, I went to the registration counter at the Library Foyer to sign myself up.
At the counter, sat a group of university students, a fair Chinese guy, with spectacles who I later got to know as Fook Seng, captain of the Lifeguard Corps; a dark but fit female in a smart white shirt, Pei Ting, one of the super lao pengs in the Corps, and finally, an even darker person, male, with a seemingly moody face. I approached the counter and announced that I would want to take up the course. The moody-faced guy answered, good, with almost like an arrogant relief as here was this person willingly signing up without having to waste any of their time persuading.
Little did I know that the moody-faced fella will eventually kao me and become my boyfriend in 2 years' time.
God.
Few first impressions that I had of him, were negative, to say the least. Arrogant and intimidating was what I would label him, during those few encounters. Sometimes he reminded me of a dark monkey, with his antics. And extremely hairly legs.
Fast forward two years, I have not only grown to know him, but to love and understand.
He has been an amazing person, one who would readily accept my flaws and turn them into my strengths, never hesitating to play the hero and rescue me from a tight spot. Sensitive to my moods, he makes the lamest jokes just to see the corners of my mouth turn upwards. I am so very blessed to have him in my life.
Of course, he's not the only one doing all the work. I have also been accepting his flaws like a sponge absorbing water. Like when he would use his little finger and dig the bats out of the cave while I'm eating right in front of him. Or when he would oversleep till the late hours of the noon when he is supposed to bring me out for lunch. Or when he would make monkey antics at a moment of grave seriousness. Or the way he would chew the food that I cook and give comments food critic-like. Not enough salt, or not enough liaw. Or the way he pretends everything is all right as I am practically exhaling fire and smoke. Or when he will bend down to type something on his laptop and then scratch his bum in the process. Hot, huh?
Yea. These are the few things that makes him so adorable *sarcasm*.
But, give and take right?
To have someone to talk to in the dead of the night, to have the most ridiculous of questions asked and to have him patiently answer. To be able to be myself around him, being able to feel safe and comfy.
Happy 1st Anniversary.
*****************************************
Update:
Celebrated in Queensbay (where else?) with dinner in Sakae Sushi. Been a long time since we ate there. Initially I wanted to try something new, at TGI Friday, but the bugger (see pic below) said his friends said the place not nice la, prefers sushi la...
Too much food on the table, did not took that many pictures (human and food alike), cos was feeling particularly annoyed after HE (refer to pic below) got annoyed that I couldn't make up my mind whether to eat dinner first or to shop first. 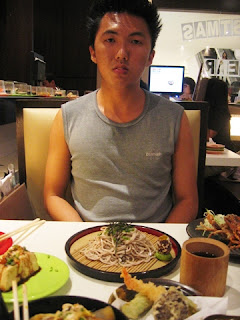 With his most bo kam muan face 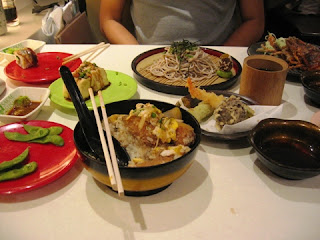 I gotta say, after so many times also, my favourite has to be the Don, salmon or chicken teriyaki. Always order that. Sometimes I can be most un-adventourous.

Shopping details! Bought a black satin-y spag top and a red cardigan from MNG. None were on sale though, but pretty much reasonably priced. Happy, happy, happy with purchases!

Posted by Giffo Hoots at December 02, 2007
Email ThisBlogThis!Share to TwitterShare to FacebookShare to Pinterest
Labels: Bookmarked