Grabbing the Bull by the (long) Horns

Shopping shopping! Have been doing loads of this every weekend, and sometimes indulge on weekdays too... Proud to say that I've not been spending every dollar on my own self, but for familes and friends back home... I think I'll need to put up a post on stuff that I've bought, so I shall skip the shopping details and move on to the main and important stuff :p

It's the last day of the rodeo and we cannot miss it! It's in a place called Reliant Stadium and it took us around 20 minutes to reach. By then, it was already 2pm. 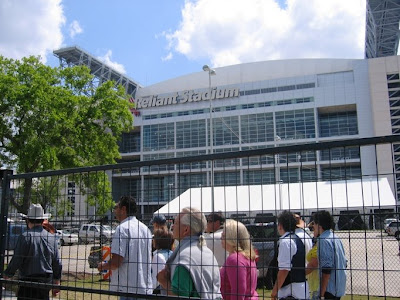 The Houston Livestock show and Rodeo is held every year and is apparently the biggest livestock show and rodeo in the world (I mean, who else would host something like that... so that's why it's the biggest?). There are many activities held in this roughly 20 days duration, barbeque competitions, cookouts, livestock judging, etc and etc.

Tickets to get in costs us $16 each, also entitles you to watch concert by 'special' artistes/bands. Each day different performers play for the night and at the very last day it so happens to be ZZ Top, a Texas rock group made up of 3, uh, senior men. 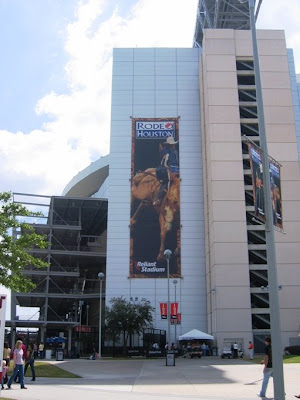 The weather was good, bit warm at 24C I think. A T-shirt is enough to be sufficiently clothed. 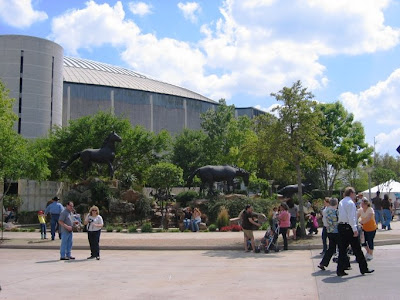 Got ourselves in and there were rows of stalls selling food, merchandises and of course, cowboy hats lol. I wanted to get one for myself, but I suppose I set my so-called requirements of one that is not too expensive and looks nice that I ended up not getting anything at all. Some of the girls got $1 hats but they were made of a material similar to foam and I decided not to get those, then I saw another $10 made of straw, but the look of the hat was sort of frumpy and doesn't justify the buy at all.. so... 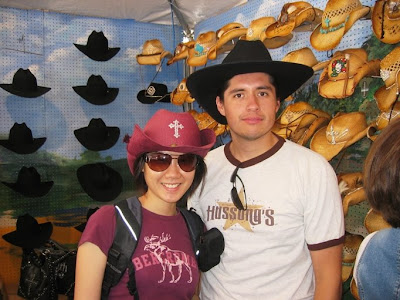 ... ma take picture with the more expensive ones lor :p . The pinkish hat with diamante cross I had on - $25.

Stuffed our faces with ice-cream.... 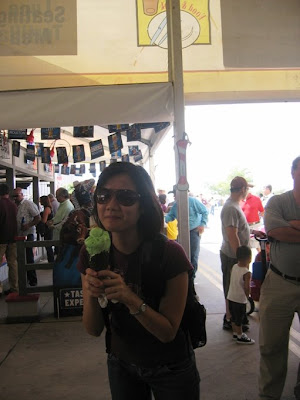 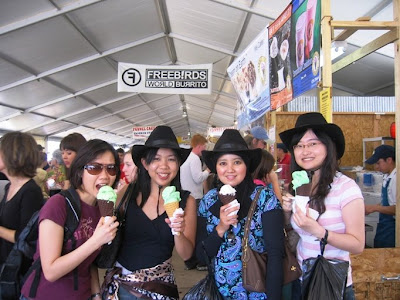 The $1 that the girls got... looks decent but the problem is I wanted one that I could keep!

Then we went into another building which had rows and rows of everything Texan being sold... longhorns, leather boots, jewelries... 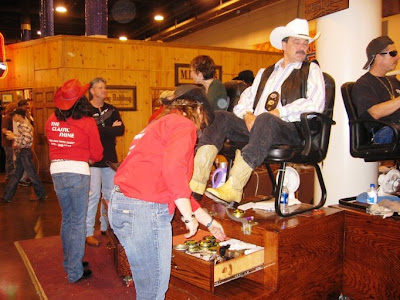 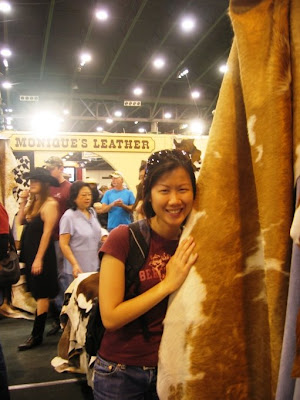 Poor skinned cow... I don't look too sympathetic though :s 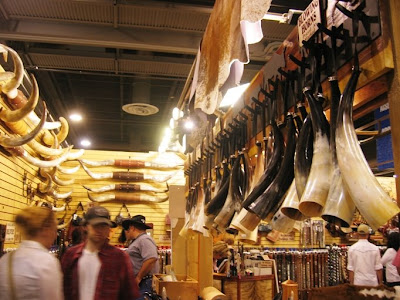 Before we could enter a separate stadium to watch the rodeo, we had to again flash our tickets and we could not bring in food or drinks... Such a pity... I had Jocelyn's unopened bottle of Coke, and my own mineral water all dunked into the trash can. 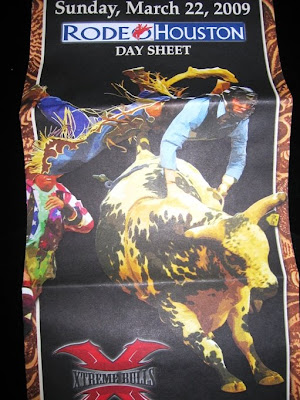 The rodeo was fun to watch, at first. You first get to see a parade of horses and horses-pulling-on-carriages parade before the show began. Then followed by courageous men holding on tightly to raging bulls as they charged back and forth. On average the men can hold on for 6-7 secs maybe? So the excitement is kind of short-lived, unlike the ones you have at an NBA game. So I got bored after a while... 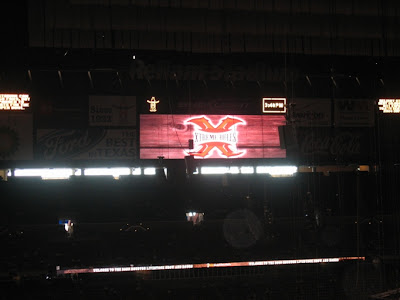 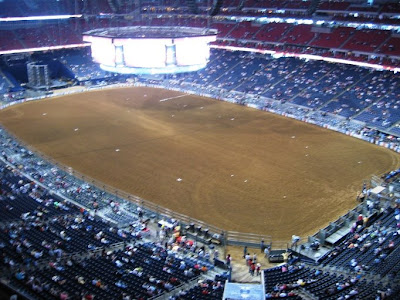 After the nth rodeo, Shifa, Jocelyn and I decided to walk around the stadium and hunt for food. I have actually brought sandwich for myself so I just tagged along looking for fries which Shifa craved.

We missed a few events after that which we only caught a glimpse of on the live tv telecast around the stadium. There was a cart race, some teenage catching cows, then there was another cute one, where kids (around 5-8 years old) clutch on to sheeps and the sheeps sprint across a distance of 20 meters. Hahahahha chubii! 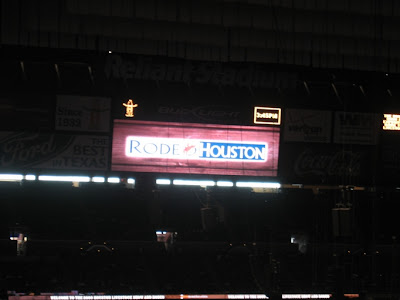 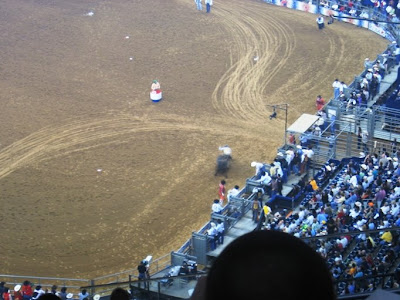 See that guy somewhere in the middle of the picture? It's a clown making a fool of himself. He is positioned in a painted barrel and makes dumb gestures to humor the crowd hahaha. When the bulls are released from the side of the stadium, after the rodeo-men (whatever its called) were thrown off, the bulls will sometimes charge at people or even towards the barrel. The clown will then pop into the barrel to hide hahahhah funny to watch. I commented to Shifa that the clown is being so dumb and she said, it's his job to be dumb. So I told Shifa that she should give a go at being a clown. 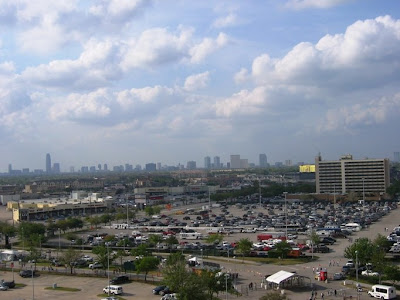 Taking a breather (not!), this picture was taken off the many outdoor area for smokers.
Then the old men concert began...

The whole stadium turned dark... to create a building suspense... then out of a corner a limo approached the stage in the centre. 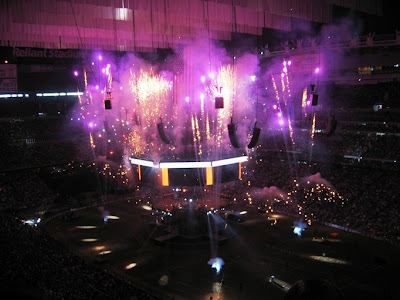 Then the 3 old men ma come out of the limo and start to sing their hearts out lor. 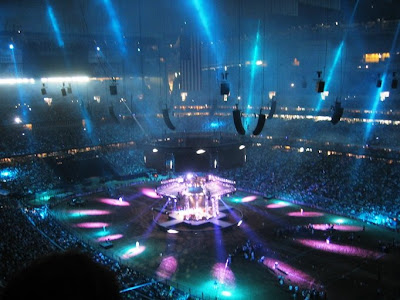 Impressive, but boring. Oh,I fell asleep with Shifa, not because they were old men, but because I find the songs a bit boring. 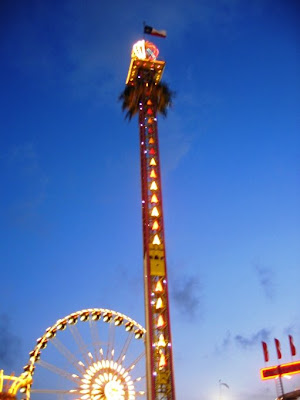 Concert ended close to 7pm (it felt longer than that), and we proceed to leave the stadium from the top. The crowd was unbelievably huge... We were walking 2 small steps every 6 secs or so. Plenty of the crowd were slightly high on booze and kept shouting and singing or cheering. Looks pretty dumb lol :p 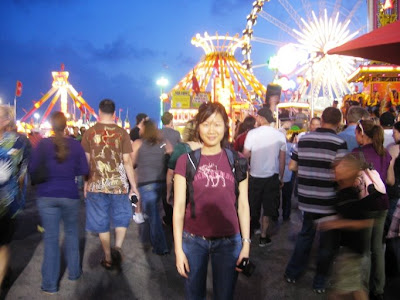 Me standing in a schematic manner, don't ask why. There was also a fair next to the stadium. Rides, ferris wheel, all those stuff. 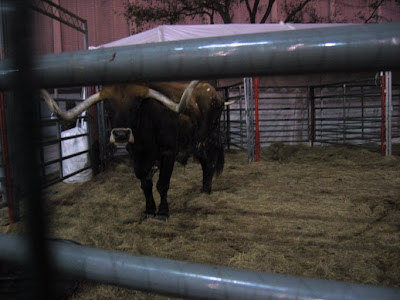 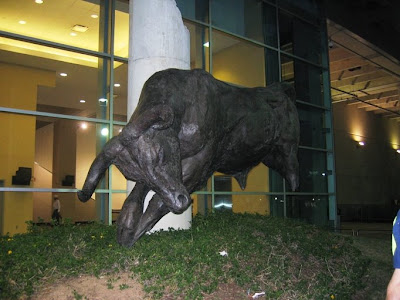 That's pretty much my Sunday lor, the previous day, Sat, the bunch of them went to Galveston beach... But I didn't go along because I wasn't feeling well and I regretted that... But it's alright, I'll be leaving for LA this April 9th! Better beaches and bitches there!

Shall end this post with a dog in balcony with innocent-tilted-head-pose just across Shifa's apt. 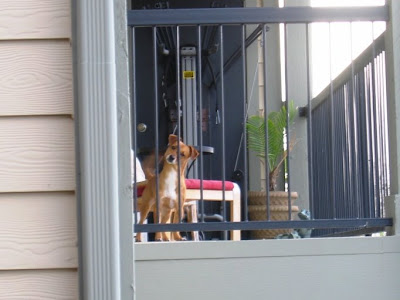 There was another white one, with the same pose, but it ran away before I could catch it on camera.
Picklesssss!!
Posted by Giffo Hoots at March 29, 2009
Email ThisBlogThis!Share to TwitterShare to FacebookShare to Pinterest
Labels: Houston, North America, Rodeo, Texas, U.S.A.