Woke up with heavy eye bags and after a quick shower, trudged downstairs for the breakfast spread. We had the options of ham, eggs, and sausages or fried rice and both me and TY opted for the whole protein breakfast. After paying BHT360 for snorkel equipments and boat ride, we got back to our room and got ready for a whole day out at the beach and snorkeling.


Obviously there are just too many breathtaking photographs which I can't include all in since blogger has the storage limit and I'm not about to bother linking to flickr or photobucket... Last skali I just took whichever ones I fancy from TY's camera because mine just doesn't seem to cut it :( 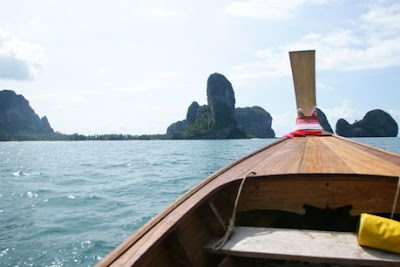 On this trip did I only start to realize that I actually have sea sickness. Especially so on the longboats! So damn rocky waseh pening kelapa @.@ You could immediately feel the effects of someone shifting his/her butt an inch to one side.

Krabi surely provide a sight that is rarely seen on the coasts of Malaysia. 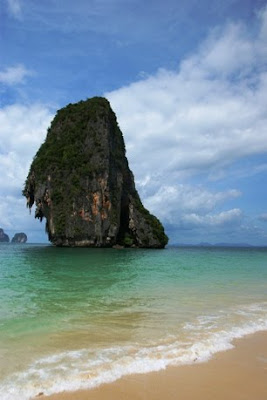 Our first island is the Phranang island. The sun blazes over us, I feel just like a human kebab roasting in the heat.

The Phranang cave isn't like any other cave. An altar is erected in honor of... I'll let you guess based on the picture. 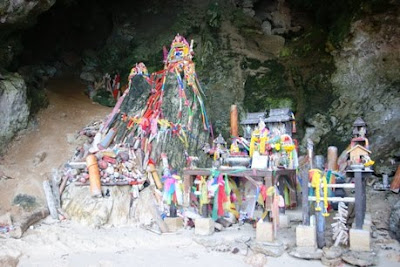 Yes. Penises. We girls were practically having a lot of fun picking out the different sizes of figurines to pose with while the guys stayed safely 10 feet away. Dugong was the best, asking Mrs Dugong not to touch anything when she wanted to take a photo with the altar rofl.

We had the option of exploring the cave but none of us were interested in using our time in the sun for some time in a cold, dark cave. So we found a spot some distance away, took off our clothes and just in time, a rain cloud rolled in and lazily rained over us pitiful people hahahah.

As it was only a passing rain, we weren't too worried but damn, the wind that came with it sure is cold! Before long we were all soaking in the sea for its warmth. Rain lasted for about 20 minutes before the sun peeks out again. I am pleased to say that that was the only encounter with bad weather throughout. I was told by a Thai expat friend that the range of dates we have picked falls on the monsoon season, the peak season for traveling to the West Coast is from October onwards. 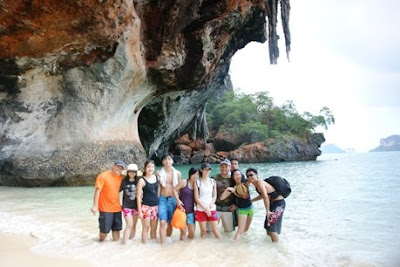 While frolicking in the sun, we found this rope hanging off a jutting rock. Yours truly actually managed to climb up, pictures as evidence :p 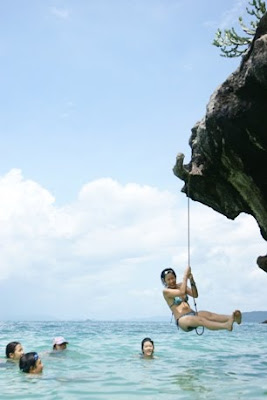 With my admiring fans all around rofl. I would love to put up more pictures of the surrounding view but I have to be extremely choosy in my choice of photos, so no :( After a bit, Jeff called us to move on to the next island. Not before stopping by this island called Chicken Island, which resembles, well, a chicken. Hmm.. not quite, I thought it looked more like a turkey. 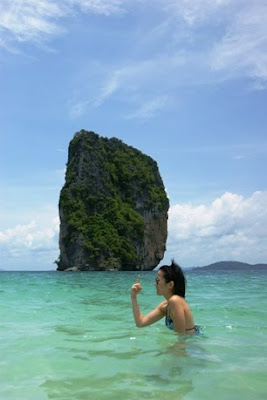 Fake or not doesn't stop us from camwhoring with it. 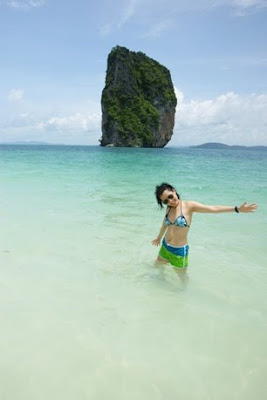 This is my favorite picture out of the entire album.


I think we spend the longest time on the Poda island (don't ask). Tried snorkeling there but the snorkeling mask seems faulty and water seems to be getting into it. Well either that or I still very much suck at using snorkeling gears. It was close to noon by then and my stomach was growling. Unable to contain my hunger, an ice-cream vendor (with an icepack strapped) passes by in an attempt to seduce me with his icy sticks.

An ice-cream cone is priced at a staggering 80 Baht (RM8). Hunger overwhelms and I gave in. Oh well, better poorer than having irreversible gastrointestinal related diseases (justify, justify!). 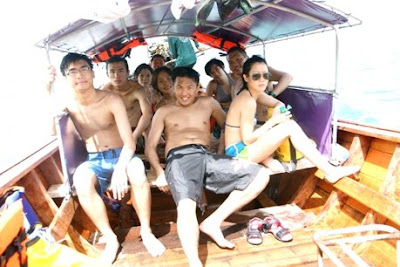 This is me looking like crap + moody + boh sim + seasickness. Could barely talk except for showing this lcly face hahahahhaha. Thank goodness for Mrs Dugong's hong iu which somewhat made the boat ride a little bit more bearable. TY who loves boat ride looked like he's having the time of his life. With a glittery tan. 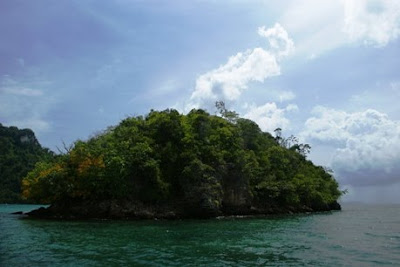 I believe this is one of the Tam Tam islands - three interconnecting islands which is possible to travel by foot to each of them when the tide is low enough.

Sun burnt, hungry, sticky with suntan oil and sunblocks, a hairy mess later, we got back to our hotels and cleaned up to get ready for a very late lunch. I'll call it tea because it's already around 5pm I think. 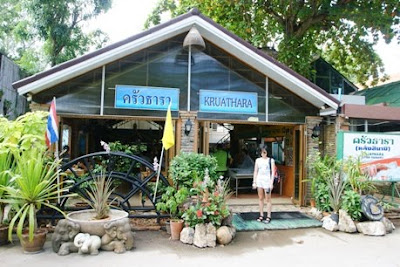 Famished, close to 7 dishes were ordered. 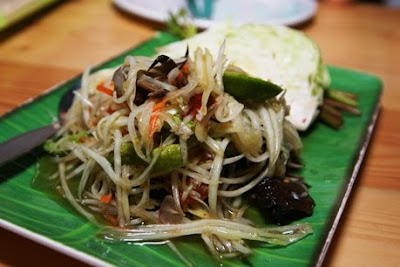 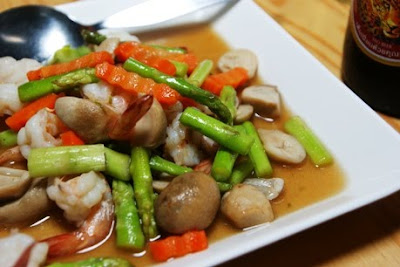 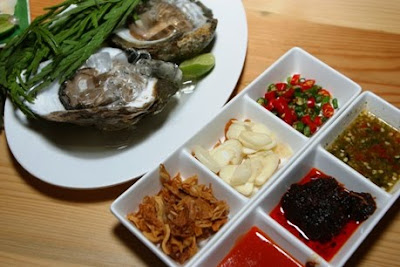 Big fat juice oysters yum yum. Considered an aphrodisiac but I'm just happy to be slurping them in, after a squeeze of lemon and a dribble of Thai green chili. There are 5 other dips provided, fried anchovies, garlic slices, chopped bird's eye chilis, chili ketchup, chili with chili oil and Thai green chili. Without a doubt, the Thai green chili has to be the best oyster companion, after lemon of course. 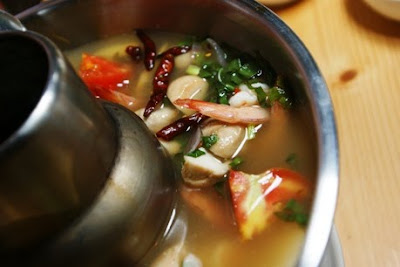 Tom yum gong - TY requested for a super hot tom yum. And they certainly delivered... though not quite as hot as the Keng Som fish (details later ;)) This tom yum comes in a clear broth but the fragrance of lemongrass whets the appetite for more. 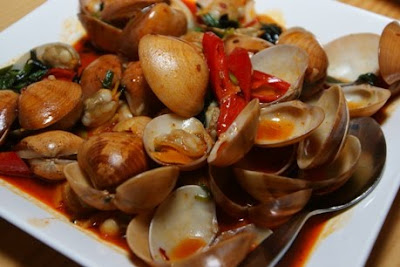 Our spicy lala. Gone within 5 minutes served at our table. Damn these Lifeguards. 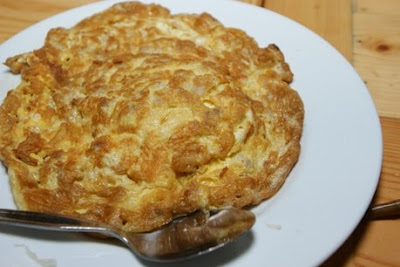 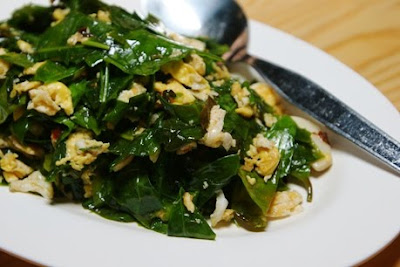 The Pa Miong (hope I somehow got it spelled correctly) which is a type of leafy bitter vegetable that is supposedly only available in Krabi / Thai. Cooked stir fried with eggs and I have no qualms about eating bitter vegs. Love this one. 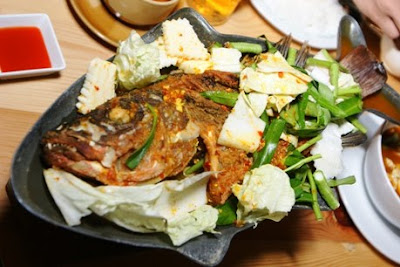 And the fish that made us all wept.


Keng Som fish. Which is literally Asam Pedas in Malay. The fish is first deep fried then braised in a sour and spicy broth. Every sip of this broth packs a punch! One of the many rare dishes that got me wiping my forehead from sweat and hissing between sips. Syok! 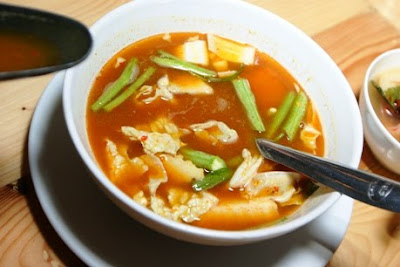 Killer keng som.... you have been warned! 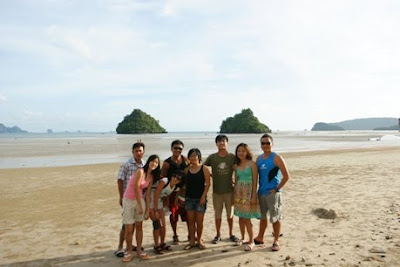 Walked over to the beach for a shot of the group with tetek in the background. Oh, Mrs Dugong wasn't able to join us for dinner because she didn't feel well. I think she was the only one besides me who had problems with the longboat.

Even after that humongous, er, tea, our Gecko Hunter still hiao want to find more food (deep fried, of course) at one of the stalls. 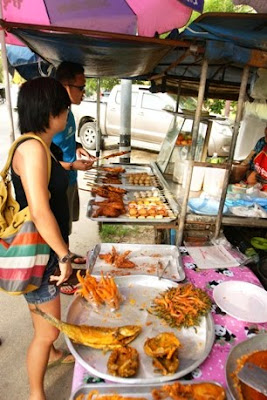 I especially liked the deep fried whole prawns (whole including head, tails and all). 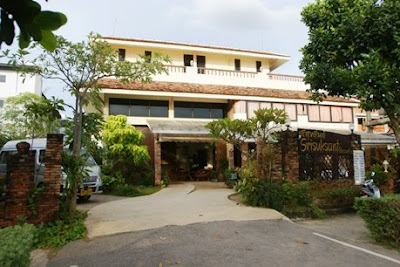 Finally a daylight photo of our hotel. Clean, great service. Oh, I have not mentioned about our little misfortune on our first night at the hotel. Digressing, before leaving on the first night we checked in, we left the air conditioning on to cool the room. When we got back, the room was as hot and stuffy as ever. Didn't help that TY has left to capture star trail shots. So I called the reception asking them to fix the air-conditioning. One of the staff came along and all he did was to move the vents one way to another and he left -.- Didn't help either that his English was poor and my Thai was limited to 2 words - Sawadeeka and Hong Nam.


A second call brought the same guy over, but this time he had this gas coolant or whatever it's called, I breathed a sigh of relief. Couldn't sleep in this humidity! After being stuck in the balcony for close to 20 minutes, the hotel staff came out and I thanked him profusely. Air from vent came out cool and breezy. Happy ending.

Ok, back to after that deep fried shrimp story. The plan was to go back to our hotel, take a rest and then we go out again for our much discussed and planned aloe vera massage. Jeff brought us to this place which Gecko Hunter reckoned is way over-priced. So we went on a hunt along the streets and found a road sign which seems to keep everyone happy. In we went along this dodgy looking alley... 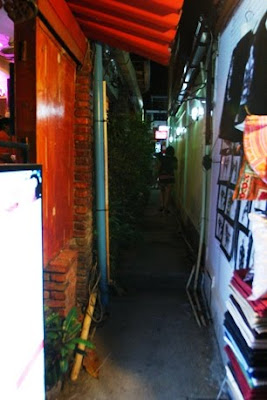 The spa lot charges 350 Baht (RM35) per hour for a combo of Thai massage with aloe vera. I was looking forward to this a lot but thanks to the lazy masseur that I received (which Horse observed to always checking the clock), my fairy tale massage crashed into the gates of hell beneath.

Her presses on my back is comparable to a cat treading on my skin. Jeez.... seriously geram thinking about it. I requested, twice for her to exert more power "Stronger, ya" and she nodded and proceeded with her meow meow paw massage. Sigh. 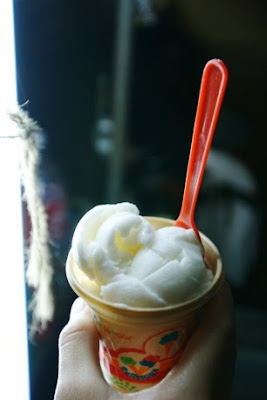 Coconut ice cream for supper afterwards. Still can't believe I got such a lousy massage from a Thai. Didn't even manage to crack my bones or whatever. Not with her kitty arms. 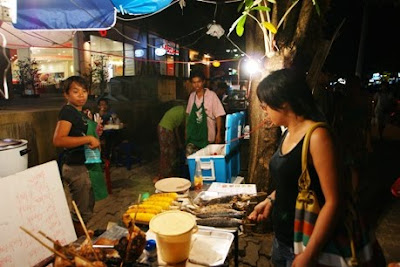 We walked back to the section where our banana shakes are sold and on a separate stall, ordered grilled fish and corn. 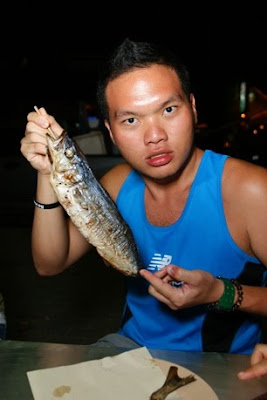 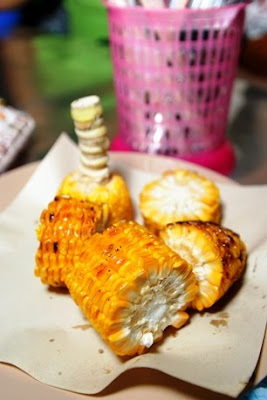 Grilled fish was ok, had fun forking out the meat. Grilled corn was extremely dry and hard.... Our banana shake stall was closed and we got our shakes from another stall, which made our shakes really diluted and practically used up a whole can of condensed milk for a drink.

Posted by Giffo Hoots at September 05, 2010
Email ThisBlogThis!Share to TwitterShare to FacebookShare to Pinterest
Labels: Around the world - South East Asia