10 of us gathered at the ungodly hour of 5:15am in front of the Sungai Dua McD. Jeff, our driver arrived some time before 6am and we begin the extremely long drive up across the borders and cutting towards the west coast.


Jeff is definitely a careful driver (if careful means driving at 80km/h). Anyways, 4 hours of careful driving later (okla, minus an hour or so at the duty free shop) we reached the Thai border. The weather is merciless, scorching hot sun roasting us all slowly. Thank goodness for ice cold coconut juice ;) 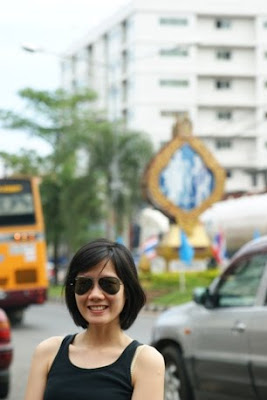 There was hardly any hassle passing through the immigration officers. When all of us gathered, InnJie asked if we had to pay RM1 to the officers. Shaking my head, Gecko Hunter pronounced loudly that the officers must have thought I was there regularly on 'service business' which earned him a kick in the shins. 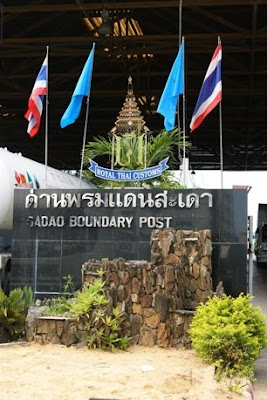 Another hour's drive brought us to a town called Phattalung. Here we lunched on my first ever so-called exotic meal.

Be warned, I am bound to gush about the great Thai food they make over here. 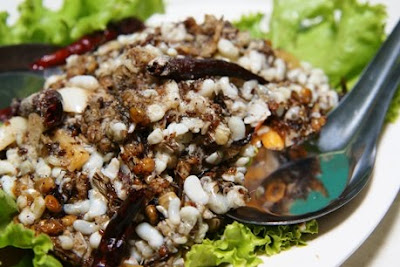 Those small white stuff you see? Ant larvae. A cacophony of eggs - the ant omelette. I was a little grossed out when I realized Gecko Hunter ordered and assured me that it tasted great. When the plate came, I just can't help looking at the bits of ant parts sticking out here and there. Took out a tiny larvae and braved myself anyways lol.

To be frank, the ants tasted really good. It's just the thought of eating ants that kind of grosses you out. There's hardly a comparison I can make of the flavor. Sourish and kinda crispy but soft in some munches lol. 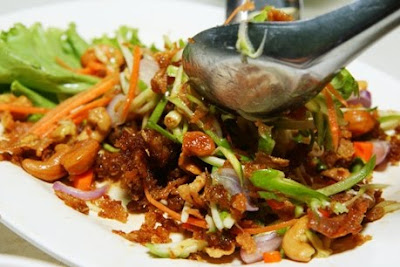 Catfish kerabu. Great balance of the 3 senses usually present in Thai salads - sour, spicy and sweet. Gone in a minute. 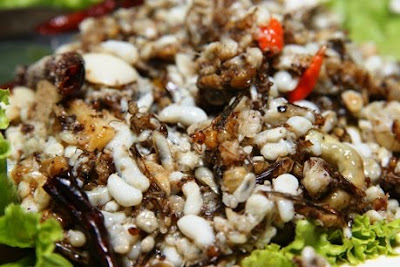 Another close-up of the fried ants dish. You can clearly see the segmented bodies of ze ants... 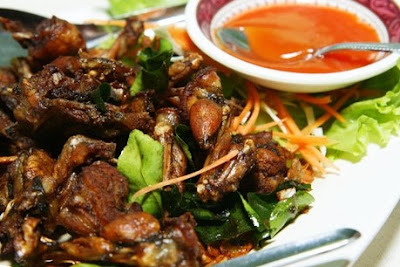 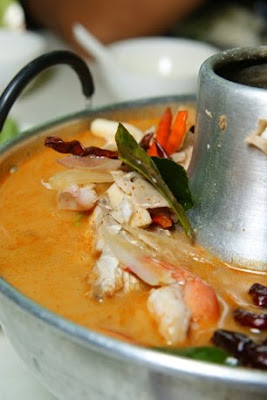 And the long awaited seafood tom yum. I was told that instead of the usual tom yum soup, this has evaporated milk added to its broth for a more milky texture and flavor. Not too spicy (which is a bit disappointing :p was hoping to get my tongue burnt) but by no means not delicious. 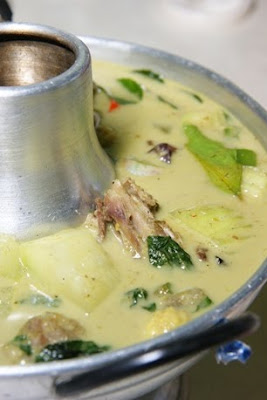 Ohhhh the green curry chicken takes the bomb! Perfection. By the way, I am commenting based on the moment when we were all starving and waiting to be fed. Now that I am down with a fever, looking back at these food photos is actually making me feel sick. Sigh. The irony of life. 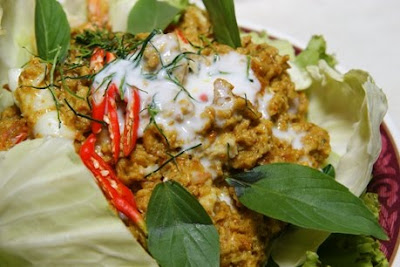 And finally the Thai version of the otak-otak. Can almost rival the Penang version. I'd still take the Penang one though :)

By then I think it was already close to 1pm. And we still have a long drive ahead of us. The roads only have 2 lanes per direction and well, like I said, 80km/h... Being a fidgety person, I had problems sitting still, so I had to occasionally fold my legs, flip my legs over towards TY, strech my legs out over the bags, lean against TY... well, you get the idea.

The road we use is pretty much on the outskirt side. A long straight road lined with plantation fields, littered with cows and also the occasional hills.

About an hour later, we reach the Le Khaokob Cave in Trang. 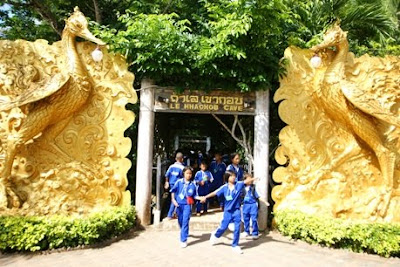 Just our luck that a school happened to organize its trip there. Lol. But other than having trouble maneuvering through the noisy midgets, we got the first boat out to the caves. 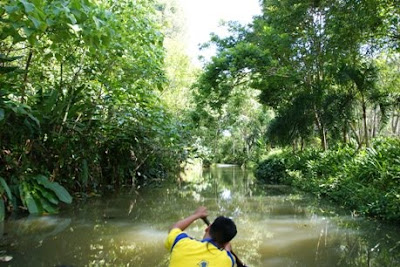 Gecko Hunter, Inn Jie, Sotong, TY and I were in the second boat to move out. The first boat has Horse, Drunkard, Dugong, Mrs Dugong and Kei Gor. Needless to say that our boat easily overtook the overweight boat.

The stalagtites are dangerously just above our heads and we have to do a lot of bending backward (in order to be able to view / avoid head damage at the same time). So yea, like I commented to Gecko Hunter, this is one of the rare moments that learning pilates has its benefits. 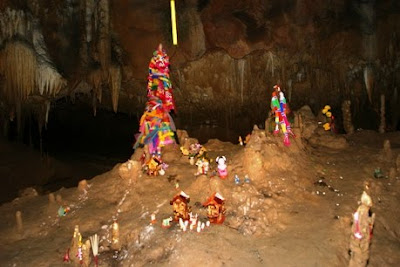 A shrine erected midway into a part of the cave. The guides who brought us in were always somehow to be in a hurry, telling us to be quick and all. I guess because it's a busy day and they didn't want the cave to be filled up with people. 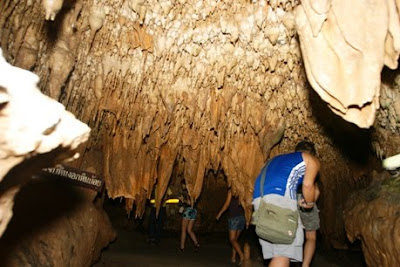 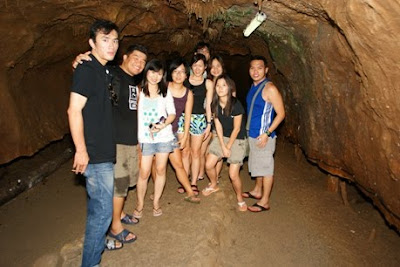 Towards the final leg of the cave tour, we were asked to remove our shoes. Confused, the guides then further asked us to lie down flat on our backs with our legs stretch out. Before long, the front guide did the same and laid his oar next to me (wetting me pants in the process). The real adventure comes when the ceiling of the cave started moving in on us as we drifted deeper into the cave. I swear, it's one of the most harrowing experiences I've ever had lol. Some stalagtites come as close as half a cm to the side of my face.

I recall having my palm over my sunglasses (hung on the collar of my shirt) to protect them. In the end I gave up and instead clutched them tightly and safely on my side. I had to practically melt myself into the boat to avoid some of the rocks lol... had my hand grazed too but it wasn't a biggie. 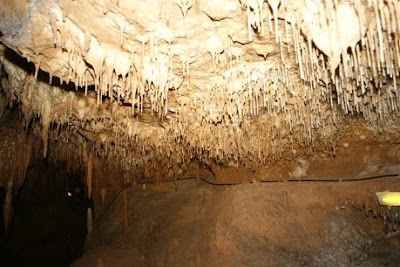 After all the excitement, Jeff brought us to this Hot Spring for a good soak. It's so relaxing (though it didn't calm the boiling TY) and I immediately feel the effects of the hot spring on my skin (yea right!). 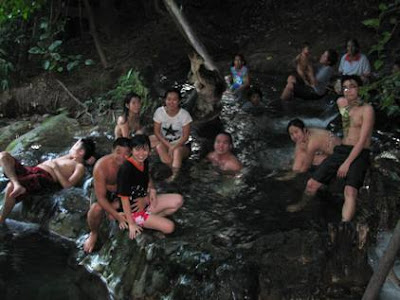 Finally, around 7:30pm Malaysian time or rather, 6:30pm Thai time, we reached the town of Aonang in Krabi. After the long ride, I wanted nothing more than a good shower and washing my hair. Seriously, I get a headache if I don't wash my hair for even a day. Call my drama but I'm not making it up!

We checked into this nice little hotel (pictures later on a brighter sunny day) which overlooks the beach, showered and got ready for dinner. Inn Jie suggested we go to McDonald's and I was like, what.... travel all the way here and eat fast food? Jeez... But somehow, the idea was supported by most in the group, so nothing I can say, though I would love to try out the street food. 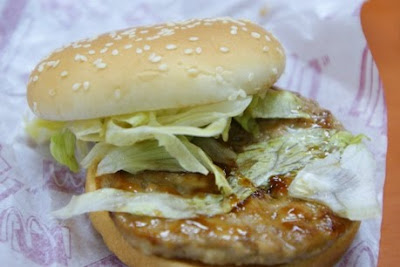 Some Samurai Pork Burger. Bleah. The picture pretty much speaks for itself. The worst is the fries. It is so omfgly salty. Salt is definitely cheaper on this side of the world. Ok, I should stop rambling on this piece of event. 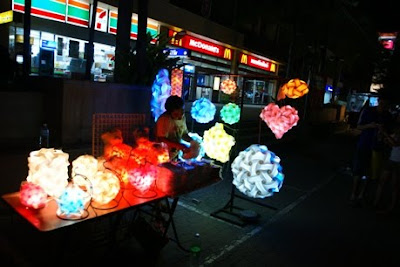 Some shots of the street stalls by the roadside. Had the most fortunate opportunity to down some much-needed fiber - banana shake. For only 20 Baht (MYR2), the blend is thick and practically comes with a money back guarantee of a smooth bowel movement the next morning. 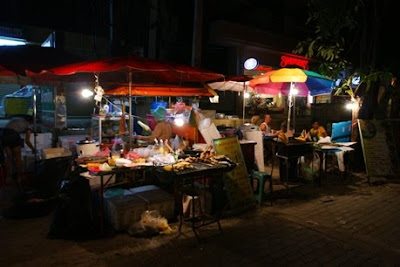 Took the tuk tuk back to the hotel for only 20 Baht per person. I love the ride, with the beach air hitting our faces. Got to bed (not so early) for some serious tanning sessions and island hopping!
Posted by Giffo Hoots at September 04, 2010
Email ThisBlogThis!Share to TwitterShare to FacebookShare to Pinterest
Labels: Around the world - South East Asia