Me and PCC officially labeled each other as 'bad influences'. Each and every single time we go out together, we end up spending too much money. Sigh. She accuses me of making her buy stuff while I, in defense, shall insist that she is the one who brings me to places with huge sales or eat expensive food!
So yea, this one time we were in Bangsar Village and she proudly stated that the reason she chose this place was because there's nothing much to shop for. So proud some more you know when she announced that. Then she asked me, want to eat first, or jalan first? Since we weren't hungry yet, we decided to go jalan first loh. First shop we entered was Peacocks... bad decision! Though great stuff they have here... and very affordable too! Alamak dilemma.... PCC ended purchasing three tops and me, a floral bag -.-
PCC, you ripping a huge, huge hole in my pocket!!
Uhhh..... so..... dinner. PCC has been eyeing this place for a bit now but hasn't had a chance to eat in.
One more thing, didn't have the sense to bring my camera along. So photos are taken with the phone camera and some of the pictures turn out to be really artistically blurry ;) 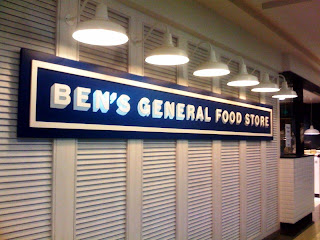 The name and the exterior.... totally had me thinking it's some sort of grocery store! Don't you think so? 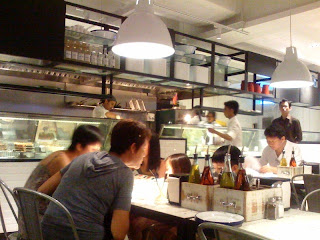 But the place is quite nice la. Simple and modern. The long rows of tables sort of reminds you of food courts, but in a good way. PCC and I were lucky to find seats with no one to squeeze with ..... for the first 20 minutes then later we were asked by the waiter to remove our shopping stuff on the neighbouring chairs to let a couple of guys sit. Hmmpf. 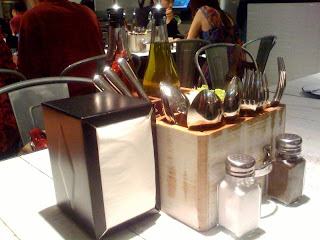 The place is supposed to be known for their salads and pizzas. Both PCC and I were contemplating whether to get two types of salad, or a salad and a pizza. We decided to opt for the latter option, and boy, thank goodness for that! 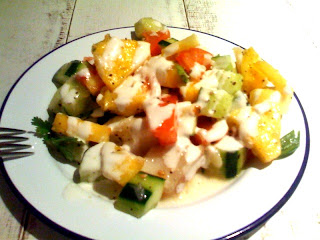 
The salad came in a small plate...  We had to rummage through the pile of vegetables only to stab out four (oh yes we counted! Use fingers on one hand cukup d) miserable chunks of the codfish lol. Salad is kinda blah... but I love the dressing though. 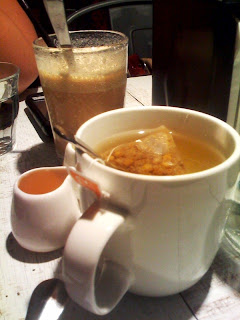 Our drinks came later than our appetiser -.- But that's because the salads are not made fresh upon order. They are pre-prepared in bulk, and displayed on top of the counter (though both PCC and I did not notice that when we came in). I had a chamomile tea (this was at the initial stage of my sore throat and eventually, a full blown package of flu, fever and phlegm-y cough) whereas PCC had iced coffee. 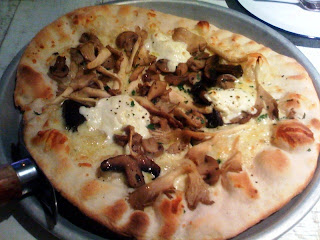 
The pizza came unsliced, though they do provide the pizza slicer or cutter or whatever you call it. Naturally I was given the tiresome task that PCC deemed to be below herself. As I struggled to slice the pizza with PCC unashamedly roaring in laughter away, our waiter strolled over and asked if we need any help lol. As I had already cut a few slices, albeit in a jagged way, he can only do so much. When he was done, he even said "Sorry Ma'm, there's nothing much I can do." Hahahahhahaha. Blardy ah you want to be smart is it? 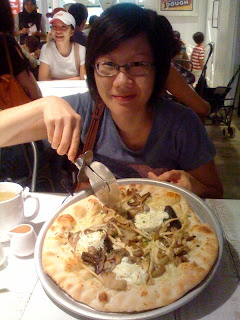 I love mushroom pizzas!! To bits! Ben's GFS pizzas are more like flat-ish bread, sort of like naan, but slightly crispier. I loikkkkeeeee! Such a joy to eat. Don't really fancy those thick crusts like eating bakery sausage pizza bread bun liddat. The funghi really heavenly. There are button mushrooms, portobello, even oyster mushrooms! Me thinks me can bake this loh, ingredients seem simple enough. What I didn't like about the pizza is the mascarpone which are just unceremoniously dumped on three spots on the pizza. Wish they could have spread them out a bit more so every bite you can have this and that. But no, one bite you take  is super dry, then another will be dripping with cheese and mushrooms are falling off.
Prices are reasonable, food is good too. Need to go back there and try more things! Heard they're opening a deli and grocer too (so in a way what the store perceives is right la).
Posted by Giffo Hoots at June 23, 2011
Email ThisBlogThis!Share to TwitterShare to FacebookShare to Pinterest
Labels: Food-Angmoh Chiak