After the much primmed and trimmed dinner at ilLido, we're getting down and dirty with roadside noodles.
This post backdates a month plus ago, after a heavy meal of pork ribs (which I am still contemplating whether to blog or not, because pictures ain't great), a couple of colleagues, Dawson, Jo and I decided to go for a second dinner. Yea, we waste no time. 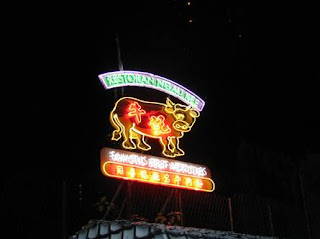 Little did I know about this hidden gem on a side of the road, just off Jalan Bukit Bintang. So it has been said that anyone born and bred in KL would know of this roadside stall.
The place was just made up of a stall where the noodles are prepared, along with tables and chairs for the patrons. It was set up by the side of a road, and propped by an abandoned shophouse. 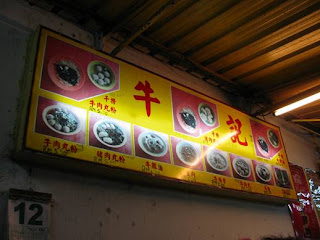 If you're easily grossed out by rats and all things that creep in the night, then you would want to give this a pass. Me, I'd try anything once. So Ngau Kee is famous for its beef noodles, but if you're in the mood for pork, no worries, they have that here as well. 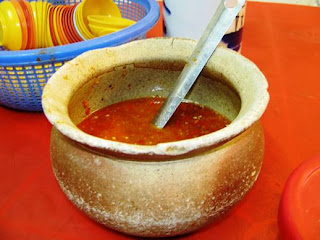 Homemade chilli of some special concoction (don't ask, and you shall not fret). Was quite spicy, that alone won me over :D 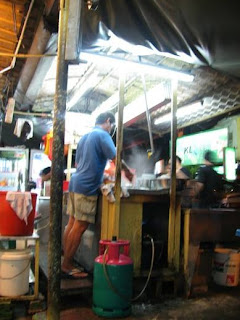 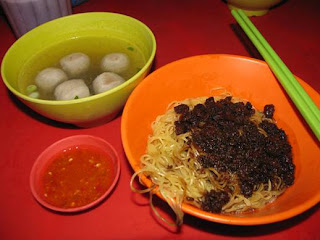 If I were to rate the food presentation, this would be like a negative 5 or something. A strand of noodle was hanging on the edge of the bowl (when one of the stall helpers plonked my noodle in front of me, the others sniggered and said my mee 'meleleh' LOL). This was the minced pork dry noodle with beef ball soup.
Pork noodles was good, simple, greasy. Can't really go wrong with street food. Beef balls was so-so lah, nothing to shout about but dipped in the special home-concocted chilli sauce, it's worth to give it a try.