One note of warning: this is one of those posts that will make you miss home, crave all sorts of nonya food, so much that your stomach aches in homesickness in the middle of the night, and eventually horribly jeopardizing all hopes of getting a good night's sleep.

Back to business! I've got a long post and an even longer list of shots! Mostly food (duh, of course).

Got on the night flight back to Penang (then eventually SP) on the Wednesday night before the Good Friday holiday. I had dinner before the flight but while flying my stomach started groaning in protest, asking to be fed. No can do! Shall not ruin my appetite with sub-standard microwave-heated airline food!! So nge nge tahan...

Touched down close to midnight, and the first thing that came to mind - Ramlee burger!!! The last roadside burger I had was probably 5 years ago if you can believe that. Let me explain this strange occurrence. My second year of uni, there was this popular burger stall that operates just outside the apartment that I rented. So it's relatively common for me to take the lift down and grab a burger on one of those many late night studying marathon. So there was this one incident when after consuming the Ramlee burger, I had a terrible case of food poisoning. All that vomiting with a heavy  is not something you just right click and delete from memory. Took me a whole lot longer.... 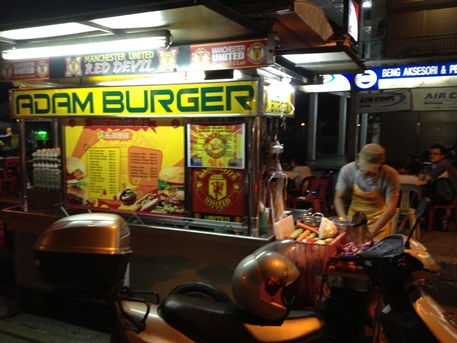 Good news! I am actually asking TY to drop me off at the same burger stall! Lol.

Ordered a burger special with cheese and mmmm.... Still tastes the same as I remembered it, without the partially-digested-burger aftertaste.

Reached SP and there still supper number 2!! Mum made red bean soup kekekeke. Apa lagi, hentam loh. What? I only go back once in a long time, this is the very least I deserve ;)

I feel downright pampered every time I head back, always an overload of TLC.

Eventually it all over loads on my midsection :\

Top right shot - TY having to work even though it was close to 2-3am.... then this Pickles pulak come and stick her chest to TY's feet : that's her usual sign that she wants the owner of the aforementioned foot to rub her chest - she just loves it.

Digressing, I did not bring my camera back, I find it now completely ignored and under utilized after the 4S made its appearance in my life! Well... it is bulky and heavy... now contemplating to get a compact cam... they make such good quality compact nowadays it's almost hard to tell the DSLR qualities from the compact cams!

Day 1 back home: Wanted to sleep in but had to go to the JPJ (road transport authority lah), and Mum pestered me to get up pronto! Re-made my driving license (my old license dunno bu cien qi na li liao), obtained a letter from JPJ for my conversion here and got it all done by noon - perfect, just in time for lunch!

The garden outside our house- flourishing with all sort of plants now (btw, don't you just love the 4S with its in-built HDR-processed photos? :D)

Initially I wanted to go to this place in town called Li Hwa, where killer siu chiong (sorta like lub cheong only much, much flavor, tender and fatz) and sweet sour fish but just my luck they were closed!! Felt like setting the shop on fire, but empathy got the better of me and we headed for Plan B - Marlbrow (ok I admit that I can only remember it's pronounced that way, but possibly not spelled like that). 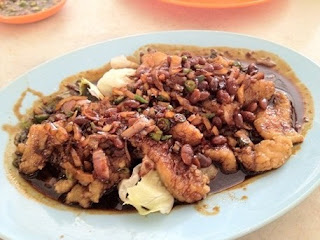 The very awesome sar bi hu!! Literally three-flavoured-fish. Love the sauce and the fish is really, really tender. Not an expert when it comes to identifying fishes but I think it's dory.


Salted egg bittergourd. Too starchy for my liking, I would prefer the slightly drier version, with enough salted egg covering those sliced gourds... mmm...

After a day of hard work and eating, chillax back home... I love moments like these, when I'm properly fed and lying comfortably in the living room, flipping through the channels and stumbling on one of my favourite shows!

Dinner Day 1 is no lacking in any way in superbness! 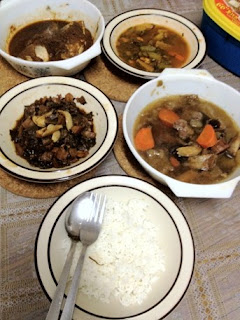 My extreme favourite perut ikan!!!! Last I had this was probably during Chinese New Year last year and I missed it soooo much!! Tua Ee, Mum and gang were really sweet to save up a portion (they made this during Cheng Beng I think), freeze them and patiently wait for my return ;) 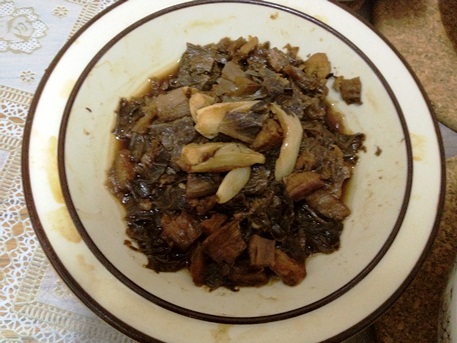 Mum's extremely good buay chai! She bought the chais, which is apparently very dirt with grains/dirt, cleaned them thoroughly and cooked this! She forgot to put in the peanuts, but it's alright, still very good. Got garlic also which is cooked till really, really soft..mmm...

On a side note, Mum also tapao-ed a couple of packets of her homemade buay chai and I just had them today, including peanuts - they are really, really good! Both Su En and I were singing praises heheheh. YUM! Other dishes to complement the already awesome meal, steamed fish tomyum style and Mum's apple soup.


Bought Pickles some treats, realized that she does have a lot of treats, decided to gather them all around to take a snap, then Pickles was really nosy when she saw me shifting all her favourite things around that I thought, just for fun, a pretend photoshoot. The resulting shot: 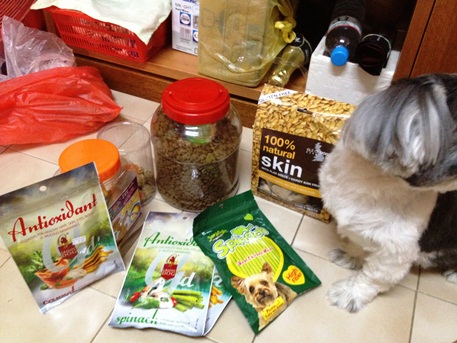 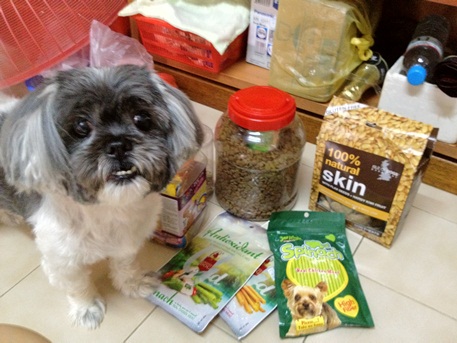 You think you want to buy any products if you see this on advertisement ah??? Kekekkeke.... Pickles face like really cacat, people will think dunno overdose of what kakakakka... Some more bah geh.... Sipek beh khi nia lol.... But still a unique 'photoshoot', I must say LOL. 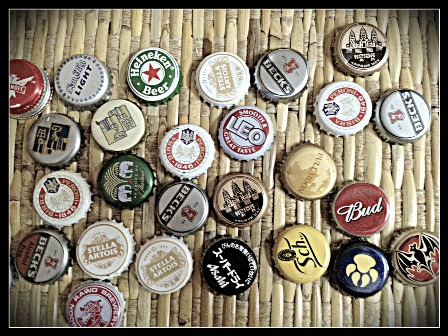 Finally got the beer caps that TY collected on his recent US trip! They are so nice and colourful. My ultimate aim to travel to as many places as I can, sample the local beer and add these to my collection! 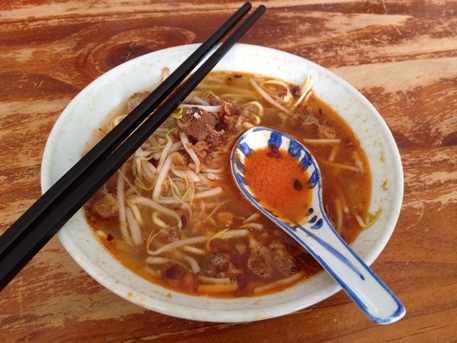 One of those places that I must go every time I go back. Patani Jaya hokkiem mee yeay! Now the uncle like got more helpers d, parents also said that he hiked up the prices d. But the hokkien mee still pretty good, well for me anyways. Hokkien mee with bak iu and bak pieces.. heavenly. 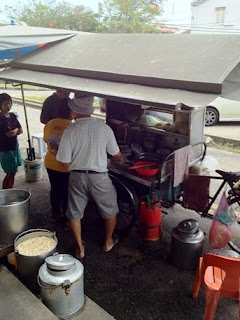 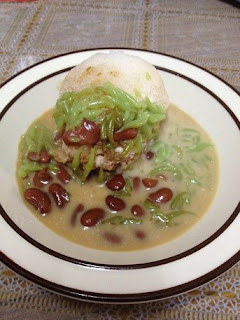 Always captured uncle's front view of the stall, this time snapped from the back.... urh.... not very flattering.

Cendol for tea time! It looked like I had everything I could during that short stay but there's a couple of items I missed out! Laksa and coconut smoothie at the bus station hmmmph :( 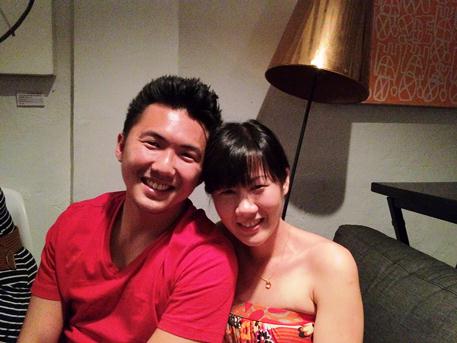 Friday night went to Penang to meet up some friends and also TY's colleagues. Evan brought us to this place called Chinahouse. Great concept there, a place with four sections - restaurant, cafe, courtyard and a bar with a live band. 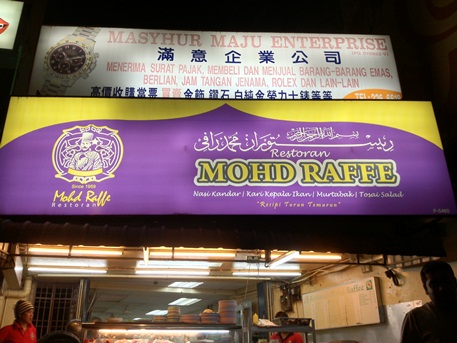 Supper @ Raffe! I only remembered to take this shot, when the roti cheese and fried chicken arrived, totally forgot to take pictures.... hehe.


The crisp, colourful shots from here onwards from TY... LOL! 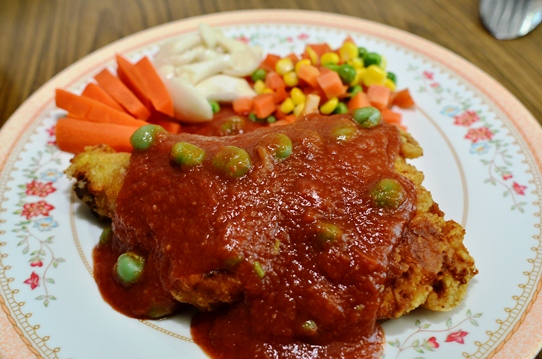 Looks like the shots came out of a flashy food magazine right!!! Got that sheen and all some more, my goodness! Can't even know where to begin to describe the awesomeness of Mum's chicken chop!

Deep fried chicken fillet drenched in the most delicious tomato base gravy with peas. It was a perfect meal, it's as good as it looks, no joke!

Got the recipe too! Might try it out one of these days.... just not really keen about deep frying and the mess I'll have to deal with after that.

This is plain torture.... salivating while blogging this. Need to get a cloth and wipe the keyboard clean later oops :x


If all those photos and hunger-inducing descriptions still has not moved you, this is a sure one! This is THE DINNER!!!!!!!!!!!!!!! 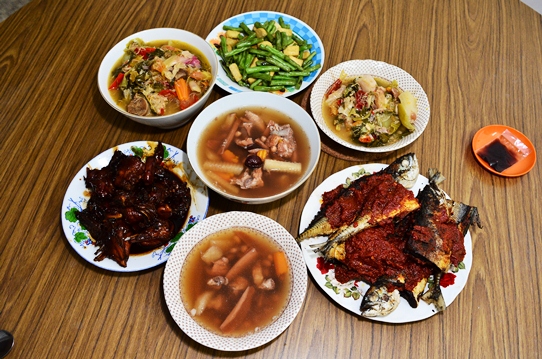 Please collect your jaw from the floor, and yes, just to verify, this left me content with a silly smile playing on my chilli-stung lips post-dinner. Rub it in!!! 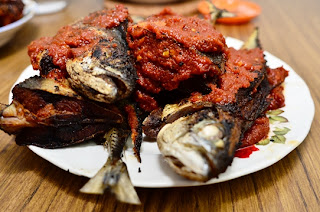 My favourite han cio hu - chilli stuffed fish. I love my Mum and Tua Ee to death (including Papa hehe). Look at the massive amount of effort they went through to put these on the groaning table.....

Tua Ee even had a separate plate just for sambal - in case need to top up ah ;) I had so much that Mum warned me to go slow on the sambal heheheheh. 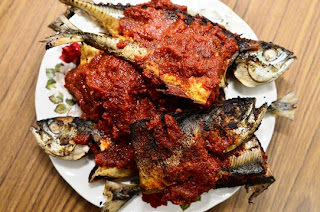 She rarely ever attempts to stop me from eating. On the contrary, she stuffs me up like stocking up food in a pantry before a nuclear bomb alert. 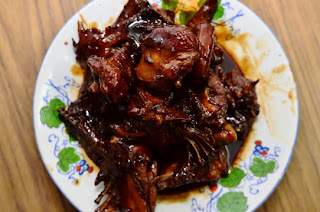 This dinner was pre-discussed and agreed between Tua Ee and I. However, this honey chicken made a sudden and unauthorized presence on the table! Like we don't already have too much food for a mere five people! (and p/s the food here is not all there is, still got more in the pots waiting to refill the plates). 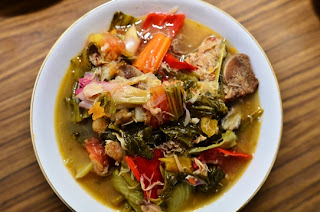 The very pro-looking chai buay! Ichiban! Been a while too since I had chai buay, didn't even have this during CNY.

Sedap slurp slurp. Ate all of these with my bare hands, that's the best way to enjoy a good nonya meal. 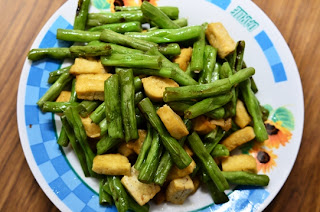 Just to offset the unhealthiness, so, cook one plate of veg hehehe. 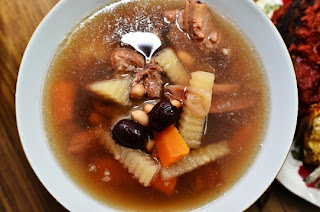 
Day 4 with some Pickles' time. 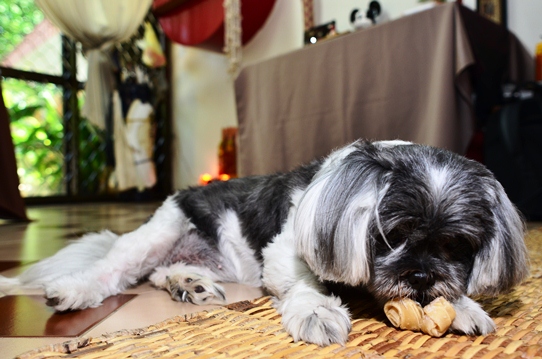 I really like this shot, Pickles looks so chubi, then got green in the background some more. lol.


The battle with TY over dunno what. Interfering with my TV session nia. 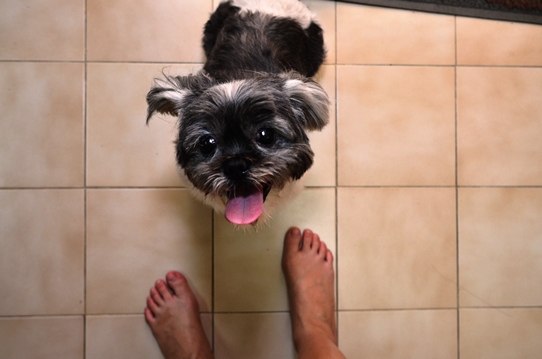 I call it the Baling Extravaganza!!!


Seriously, Ji Ee pulled all the stops this time around. You know how Tua Ee and Mum are not the biggest eaters, they pile little on their plates. So there was four of us, but Ji Ee cooked enough for 7!

Evidence in a moment. 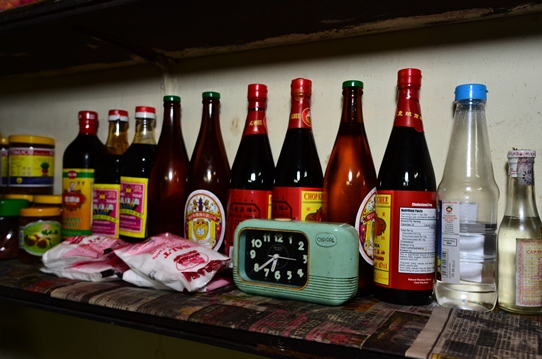 Really like this shot too... Very vintage. Reckon it will look nice in sepia. 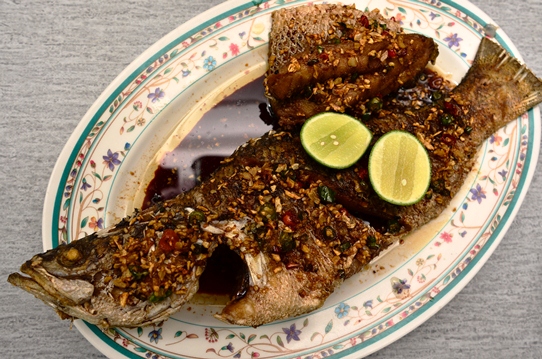 Sar bi hu!!! 10x better than Marlbrow! Like how TY said, the skin is so crispy, but underneath, the flesh is as tender as though it was steamed. Ji Ee really has some godly cooking skills there.. 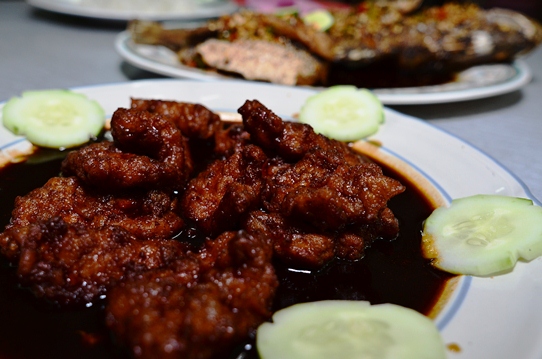 I miss you so much pai kut ong!! As good as I recall it. But this is protected recipe! Must, must get my hands on it one of these days. 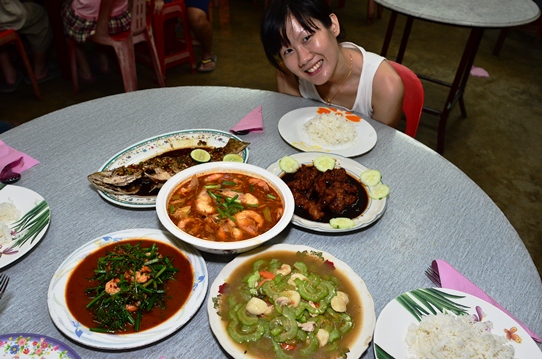 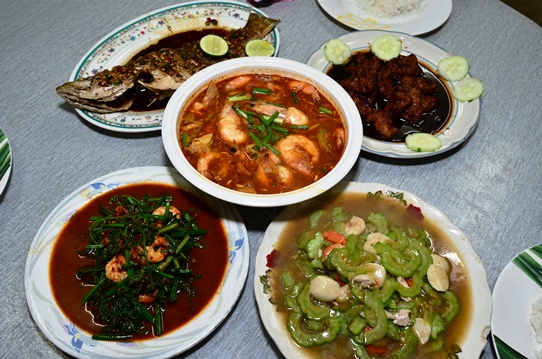 All of these for the four of us! You say la crazy or not!!! Bottom left sambal paku and bottom right stir fried bittergourd. Love the paku very much...

And the number of prawns in the tomyum soup! Walao.... those aren't middle-sized prawns, mind, those are LARGE prawns! Ho chiak maximum! Sinful, sinful, sinful....

Despite the amount, we wiped clean the plates... proud nia. Thanks to the brilliant cooking of Ji Ee :D 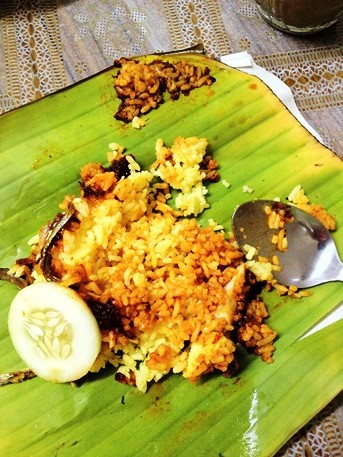 Finally.... my last meal on the morning I leave for Singapore.... nasi lemak wrapped in banana leaf. Wah haven't blogged so much for a while now..... Have more food posts coming up hehehe. Stay tuned!

Posted by Giffo Hoots at April 15, 2012
Email ThisBlogThis!Share to TwitterShare to FacebookShare to Pinterest
Labels: Comfort-Homeliness