Started out from Singapore on the evening of 5th November, though work should really start on the 7th. Journey from Singapore to Chennai took about 4 hours. Arrived 10:30pm Chennai without much delay but unfortunately the same cannot be said about our luggage. Don't get me wrong, just that the luggage took forever to come out on the conveyor. So in the meantime, I dashed off to the toilet and immediately gagged. One of the cubicle still had pieces of shit floating inside. Why the heck nobody bothered to flush? Ah well, this is India, I guess. And it's wet all over.... ugh.. I think I'm spoiled by Singapore.

So, after quickly finishing up my business while trying not to breathe, I collected my luggage and headed out of the arrival hall only to be greeted by a sea of Indians... I searched for a sign with my name on it, the whole time discomforted by the people staring at me, mostly because there just isn't any other single female traveling alone. But I just ignored them lah, which is probably best dealt that way.

Felt slightly panicky when I couldn't find my name on a placard, but spotted one as I walked further on. Phewww...... I certainly don't want to look lost or stranded in this place! Anyways, three of them escorted me to the van, felt like some important diplomat kekekeke. 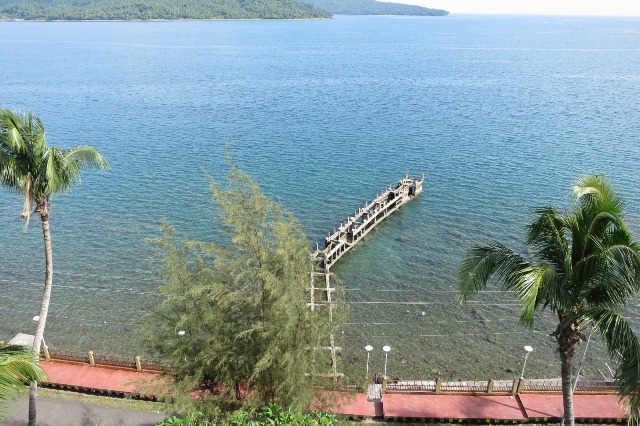 The superb view from our hotel in Port Blair

As I climbed into the van, a small voice in my head was telling me, what the hell am I doing? What if these people just kidnap me into some abandoned warehouse and gang-raped me? Haha, but the thoughts were quickly diminished as soon as they introduced themselves and the company name which all sounded correct. LOL. Talk about being paranoid.

They then whisked me off to the Hilton Hotel in Chennai, which is 15 minutes away from the airport. The roads in India are just exactly like how it is portrayed in the movies! Chaotic and cars zig-zagging in and out... and HONKING! Overtake also honk, slow also honk, fast also honk, ugly also honk -.-

Got to the hotel in one functioning piece, and I must say, wow, impressive! But only too bad I get to spend a couple of hours in the posh hotel. But kinda scary as well, the agent warned me not to get out of the hotel lol. I was still paranoid about the tap water, so, brushed my teeth and gargled with bottled drinking water :S Flipped through the tv channels, they only have local cable. Saw some 'forum' going on with two important-looking Indians but the way they talked is like they're about to get into a fight.

Showered, changed and slept in the cozy bed for 2 hours before grudgingly waking up and got ready for the next connecting flight. Collected my packed breakfast from the hotel (chicken sandwich and a fruit juice; I took the sandwich but handed the juice to the driver hehehe, he seems really pleased). At the airport, met up with the rest of the crew (other 6). I had it real good compared to the others. Some of them have been on a 10-hour flight, reached at midnight and been waiting at the airport since (it was 5am by the time I got there). Hehe, lucky me again! 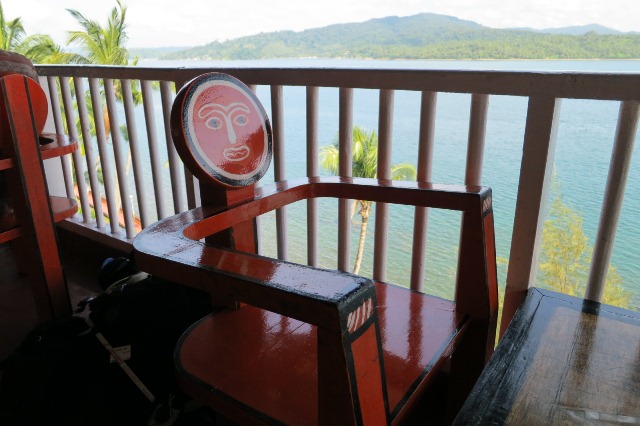 Another shot from the hotel.

At the waiting gate just before going on our flight, we have to board a bus which fetches us to the big, metal bird, it was only about 3 minutes drive away? lol. Convenience? Hmm... maybe. The domestic flight from Chennai to Port Blair was an uneventful 2-hour affair. Everyone was sleepy, including myself. Dozed off through the entire flight (woke up only to eat the vegetarian meal of chapati and some curry, followed by fruits).


2-3 hours later, landed safely in Port Blair. It was a hot, blazing day, 31deg C! I sorta liked Port Blair, I find it's like a Bali of India or something like that. It has a laidback kind of feel to it, compared to Chennai. Lesser vehicles on the road too. Even the airport is kinda quaint lol (digressing, when all of us reached the airport, we were still hanging around for our documents to pass through etc. Everyone else had no problems cos we were the only foreigners to Port Blair LOL. That's how little publicity Port Blair gets).


Dropped our things at the hotel, breakfasted (no pics, but obviously an Indian meal - masala chicken, vegetable curry, chapatis...) and rested for a bit before commencing to get our work visas done at the police station. It's really hard to get anything done here. First we were told to gather around at 9:30am to the police station. Come 9:30am, we were told that superintendent is busy, so postponed to 1pm. 1pm came and still no urgency, back to the room for another nap until finally at 3pm got a call to gather at the lobby along with our luggage. 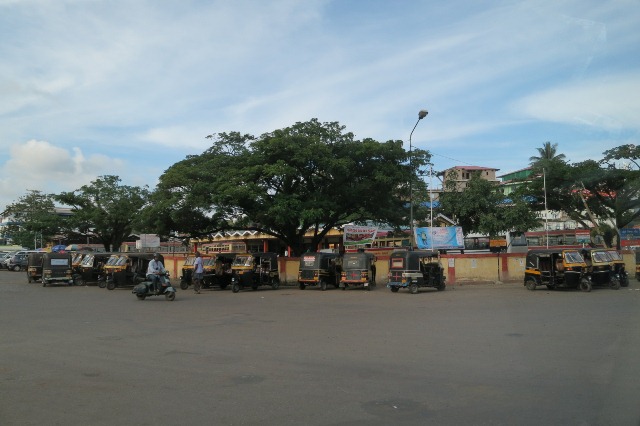 Shots mostly taken from the van. 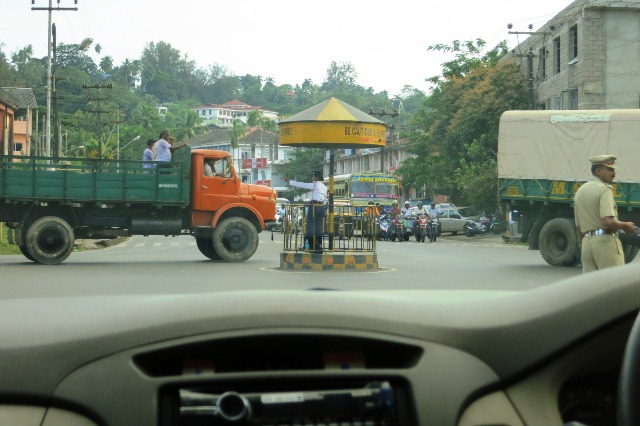 Cute little roundabouts put up on the junctions around Port Blair where police women controls the traffic. 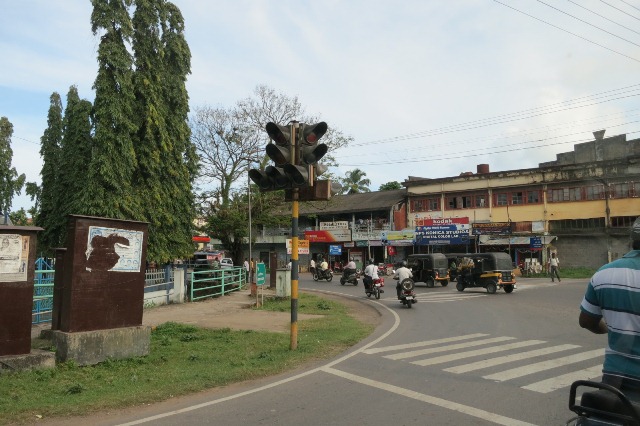 Caste system is truly prevalent in India. We were first called one by one into a small, dingy room with a single fan cooling the room where a police officer checks my documents. Felt like the whole scene was grabbed from a Bollywood movie haha. Officer had a thick, bushy moustache and he was just scolding his assistants (maybe that's just the way they talk?). Then when it came to pasting my pictures on the forms (about 6 photos), they called a girl to come in with a glue -.- Yea, like a guy can't glue photos?

That wasn't all, after that the superintendent (prolly the biggest shot in the building) wanted to see all of us. In a single file we went into his office (this one air-conditioned). He's obviously an important person, had three phones on his side with his officers flipping pages for him to sign. Once, his pen went out of ink and he started sort of shaking the pen and in a split second, another pen was whipped out and presented to him by another officer, lol.

Anyway, I was really unlucky (according to the others) cos instead of getting the quick chopper ride from Port Blair to the vessel, apparently there was a cyclone so the transfer of the chopper to Port Blair was delayed; so they could only transfer us with chase boats. Think of it as a 1 hour + chopper ride versus a 12 hours boat ride -.- Got onto the chase boat by 7pm, had dinner and slept in a small bunk bed before finally arrived close to the vessel at 7am the next morning!

That feeling when you're transferred to a smaller boat and transported to the huge vessel is just indescribable. The size of the vessel just makes me go whoa! in my head. 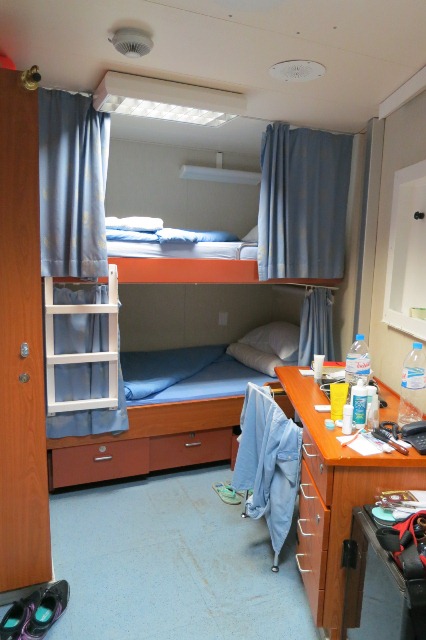 A glimpse of my first cabin (cos I was transferred to another better cabin after a week here). Basic, but really comfortable. I like the fact that there's a toilet/shower attached to every cabin, so there's no need of sharing, overhearing awkward sounds... lol. Only thing is that you share with someone on the opposite shift, so you hardly see each other anyways. But I am super duper lucky, had the whole cabin to myself :D 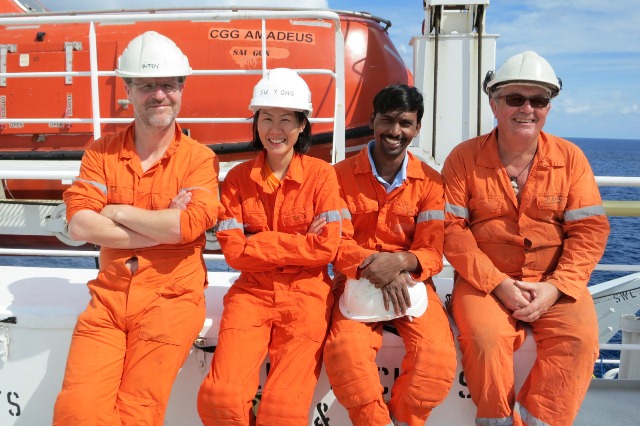 A few of the crew during one of the fire drills lol. Took the chance to just snap about. 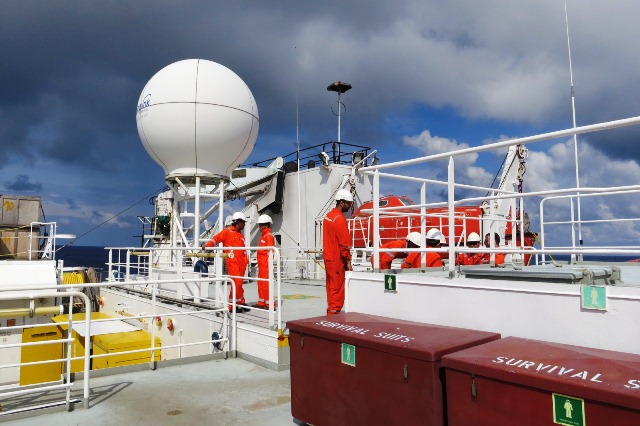 I absolutely love my new job. Compared to what I have to deal with before this, this is an almost stress free job. I work on a 12-hour shift and seriously, I don't think I'm even really working the full 12 hours. I'll be dodging off to the galley to find food, or talking with the other friendly crew, or doing mindless surfing, Facebooking, or simply just leaning over the railings and stare at the horizon. Simply because I have too much free time! 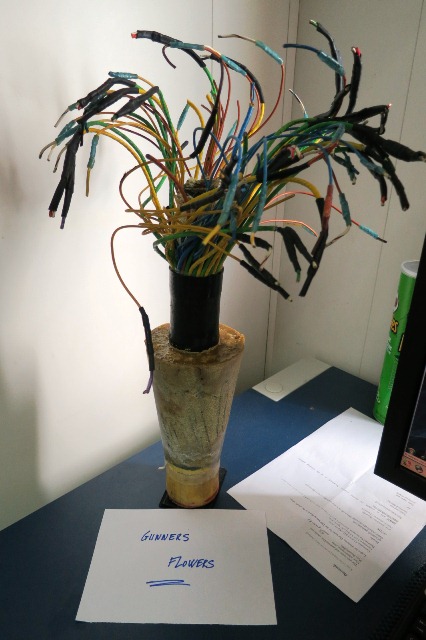 Just a glimpse of the kind of humor you get with these crazy bunch onboard :) 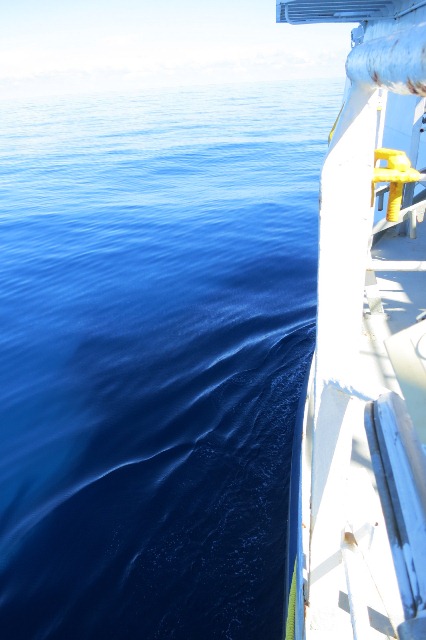 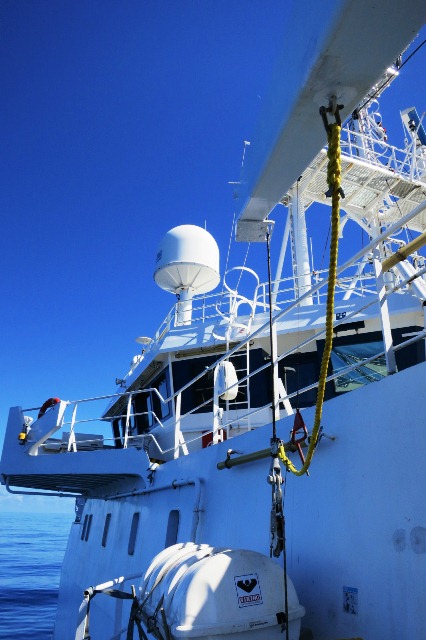 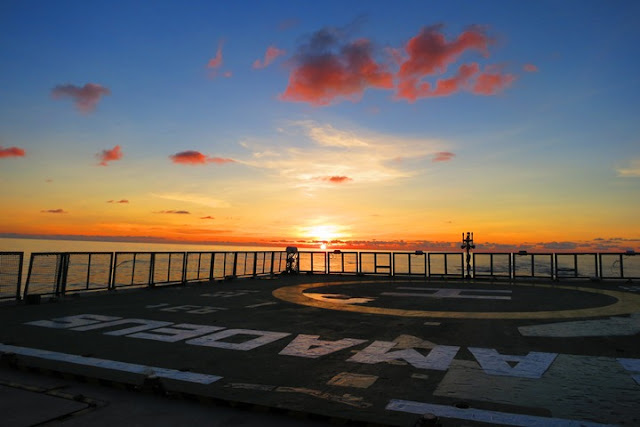 By far, the most beautiful sunset I have ever witnessed. The sky was absolutely clear, with only a scatter of clouds. The clear outline of the sun is absolutely breathtaking. I was quite surprised at how fast the sun sets. Just a few shots later I can see the sun dipping quickly beyond the horizon. 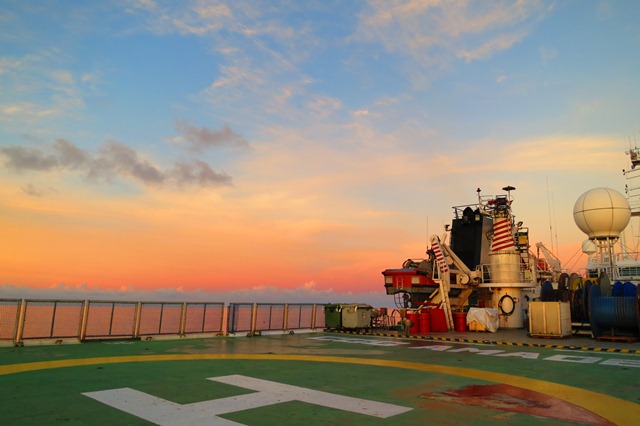 And the surrounding sky just turned into this beautiful blushing pink. 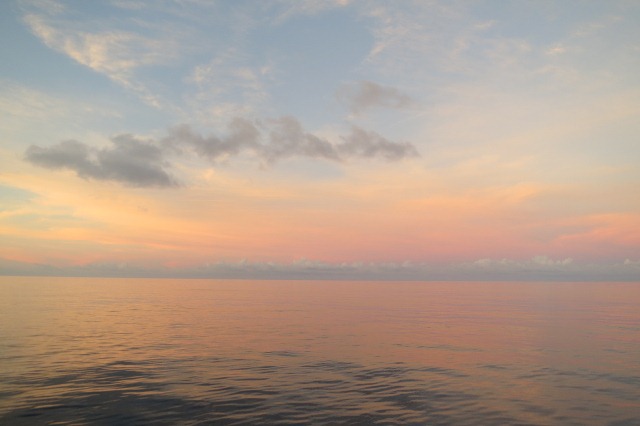 And just a little later, the view changed with the skies rebounding the faint rays of the setting sun, shades of pink reflected on sea, with an almost golden shimmer to it. Absolutely breathtaking. 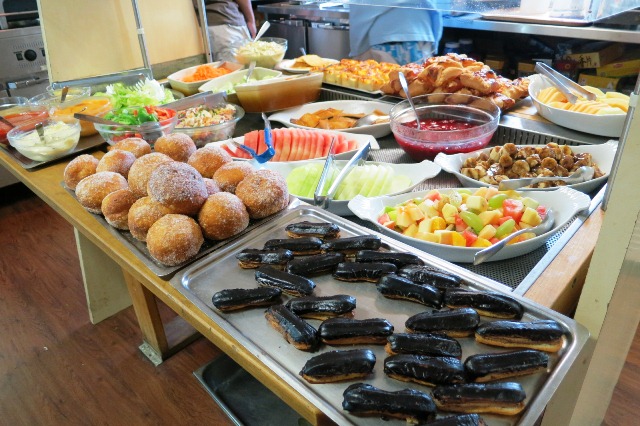 Oh... these people really spoil us here.... we have 3-4 cooks on board, including one pastry chef and one Indian chef. The menu changes at every meal, so technically, there shouldn't be any repeats lol. My favourites are the hamburger days and steak days. The steaks are heavenly! Tender and juicy, they beat some of the best steakhouses to steak hall of shame. 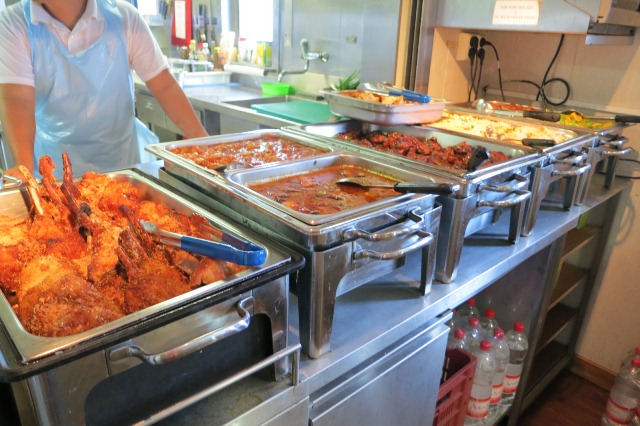 Oh, the Indian food is superb as well. My favourites are the chapati and paneers. But coming from Penang, no matter how good the food is, I still miss my laksa, assam belai, hu chee huan chio, tu tor th'ng, jiu hu char.... arrrgh! I could go on and on :(

There's so much food in the galley that to die of starvation here is almost laughable. There is always a stock of bread that you can toast, along with Nutella chocolate spread, peanut butter spread, packets of yoghurt, baguettes, jams, biscuits, nuts, fruits, oat, cereal along with a multitude of juices and milk, instant noodles, milo, coffee, tea bags, potato chips.... the list goes on....

Not to mention that laundry is kau-tim-ed by the steward :P Just lump all dirty clothes in a bag, dump it to the laundry room, and collect warm, fluffy clothes when it's done :) 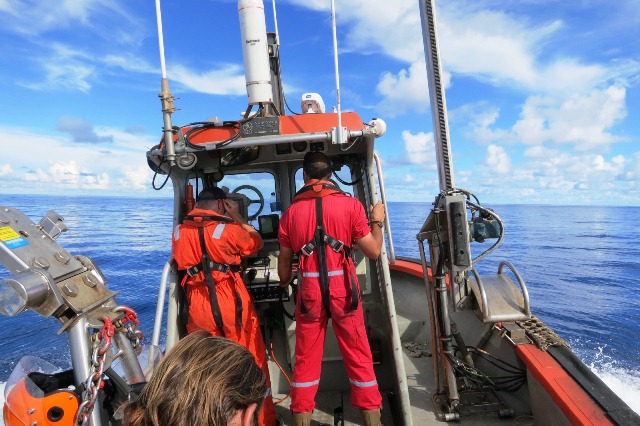 Fun's when you're out on a work boat mission... certainly beats the monotony out of your routine, eh. 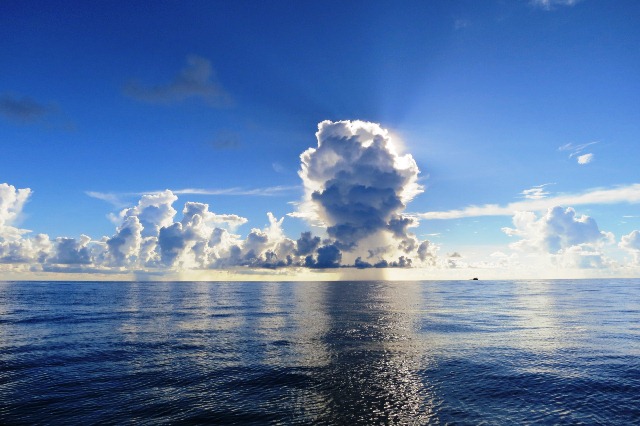 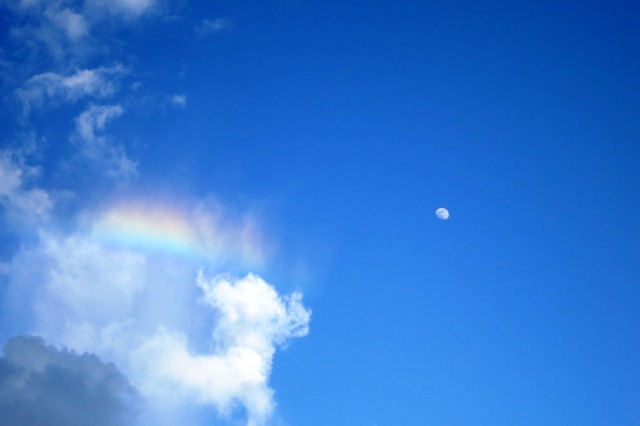 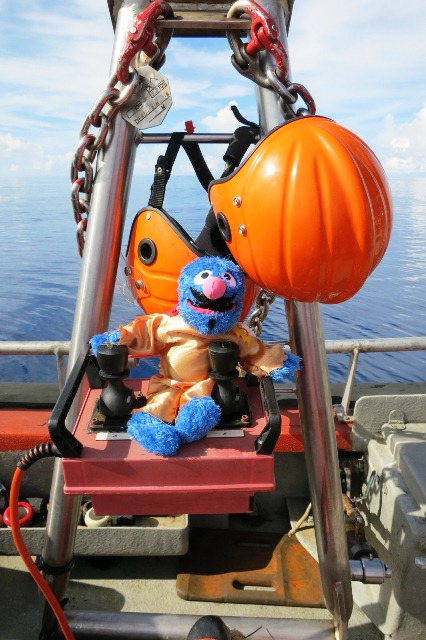 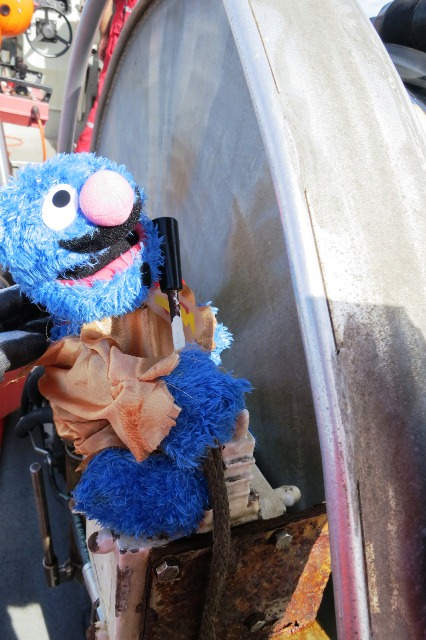 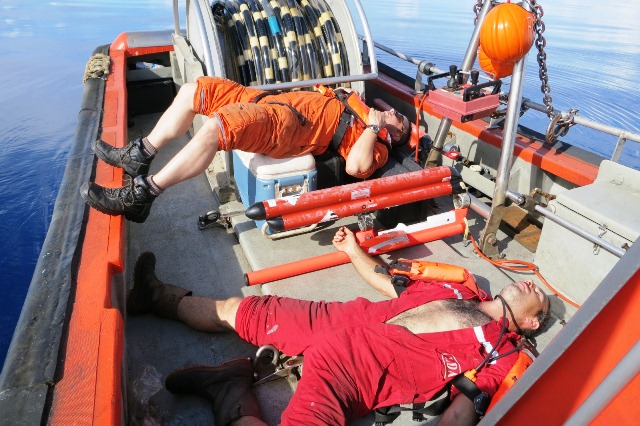 The guys tanning LOL!! The one at the bottom looks like a roadkill. 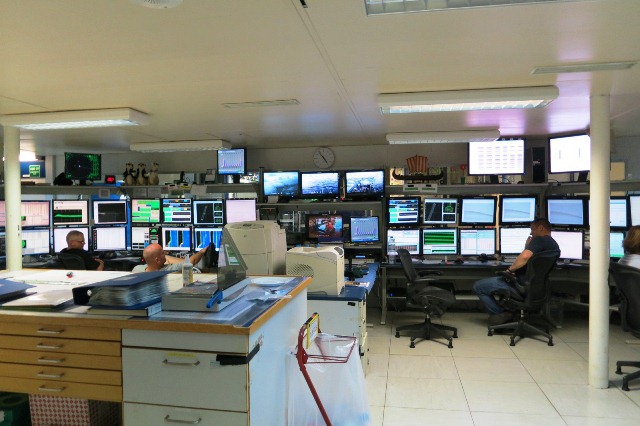 And finally, this is what our office looks like... can you count the number of monitors? lol.... and this is not even the full wide view :P

Posted by Su Yin at November 28, 2012
Email ThisBlogThis!Share to TwitterShare to FacebookShare to Pinterest
Labels: Around the world - Asia, Snippets from the Sea
Location: Port Blair, Andaman and Nicobar Islands, India