I can completely understand if you snigger at the title and think it is extremely cliched. But honestly, we literally did get lost in Hanoi. And in translation. I'll come back to that in a bit. 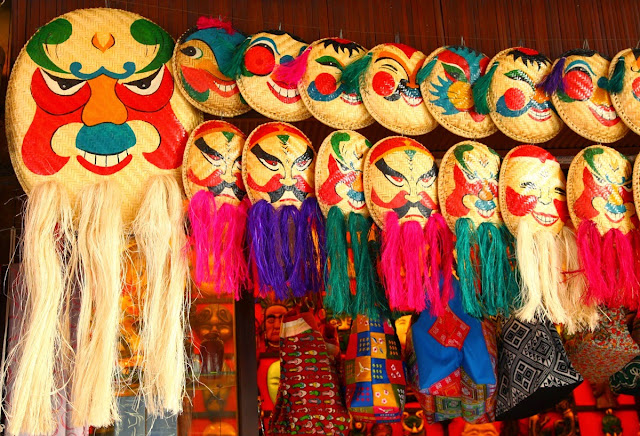 This trip with Mom and Dad, I got a travel agent to sort out the finer details - a ride from aiport to hotel, tour guide, hotels and other transfers. I mean, if it saves me from pulling my hair out planning in detail and sending emails back and forth, I am happy to pay extra for someone else to do the dirty work!

We flew with Malaysian Airlines (digressing, what a horrible airline! They didn't even bother to get everybody's seats upright at landing, selective treatment from cabin crew according to passengers' skin colour and disgusting airline meals) from Penang to KL, then KL to Hanoi.

The night before we left, we sent poor Pickles over to Tua Ee's place for babysitting hehe. I remember her reaction just as we were leaving her there that night, she dodged me (in a playful manner) when I tried to pat her; then afterwards, as we retreated to the car, I could see her confused look (being almost blind, she couldn't tell what's going on) as she tried to search for us :( :( :(

We started out from the house at 4 in the morning, for the 6am flight and arrived Hanoi at noon, local time. The flight was delayed (actually, all flight legs were delayed! Typical.) but otherwise everything else went smoothly. Immigration was a breeze, bags turned up without problems and we found our driver easily. Good omen indeed.

It took almost an hour to get to the hotel, smack in the center of the Old Quarter. Checked in, quick shower and out to explore! 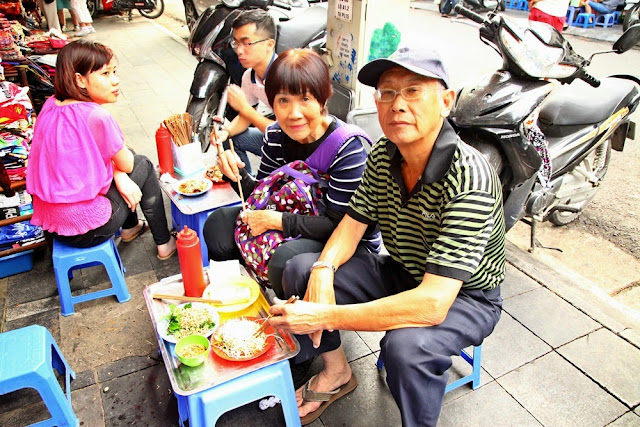 First things first - Lunch. First place we saw had lots of local people sitting on little chairs and eating on little tables - good enough for us! 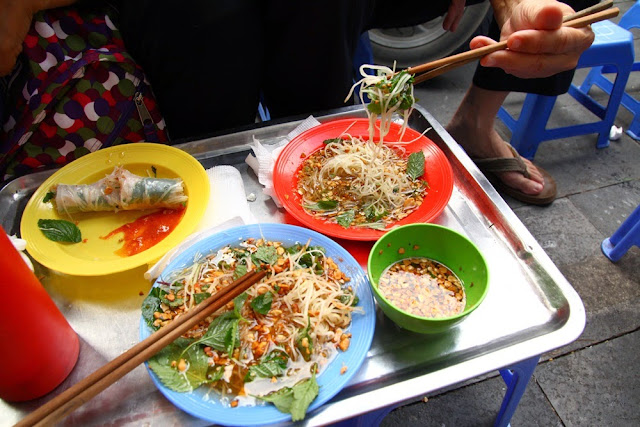 A number of hand languages were exchanged and we were served with two plates of fresh, crunchy salad. They were yummy! Peanuts tossed over julienned cucumber and carrots, mint leaves and more herby leaves that I couldn't identify. The sauce was sweet and only slightly spicy. Very refreshing starter! 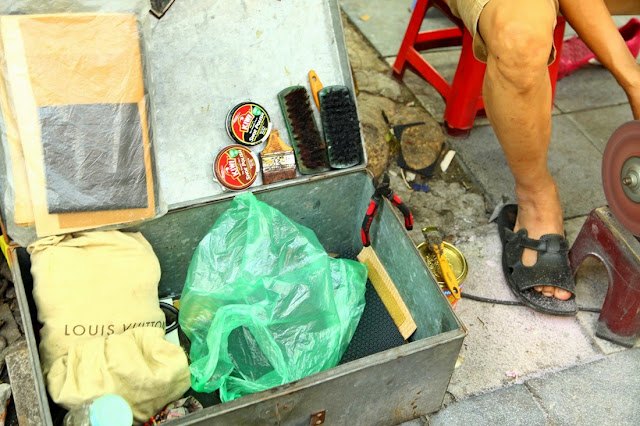 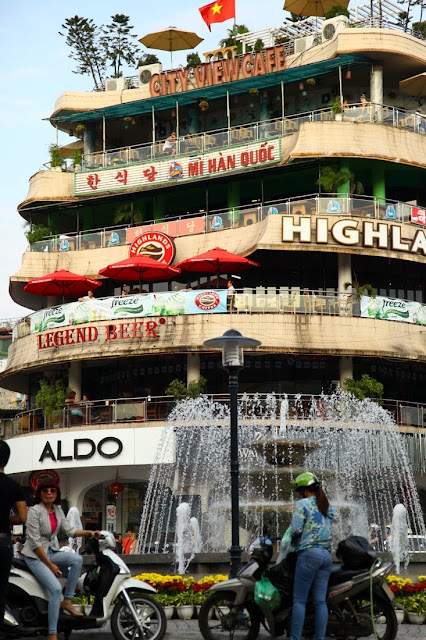 Encouraged by our initial accidental encounter, we ventured further into the bowels of gastronomy, hungry for more. 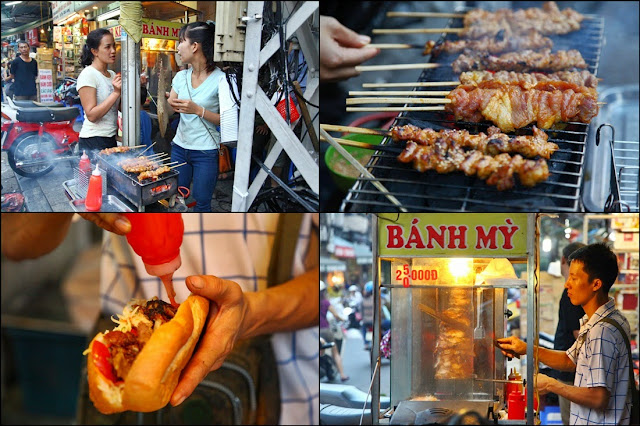 And we were rewarded by our resilience. Succulent pork satay (had to wait a while for THAT one!), followed by a kebab sandwich thingie - toasted baguette with sliced pork kebab, topped with crunchy cabbage and carrots. It was delicious! 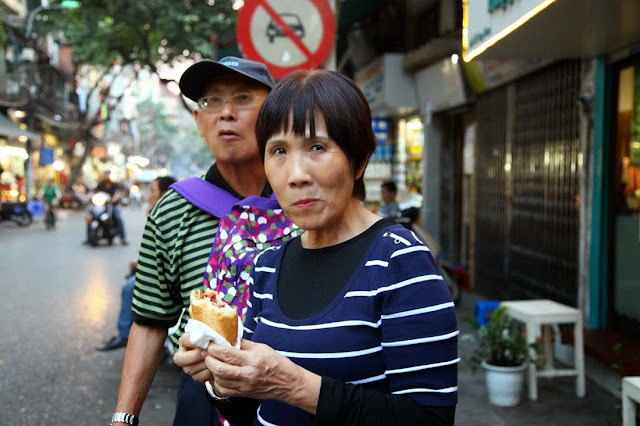 There is something about the vibe in the Hanoi atmosphere. There is a constant activity, the hustle and bustle - but not overwhelming so (unlike the kind you get in major Indian cities!). I could order a cup of hot, strong Vietnamese coffee and sit by the sidewalk all day, watching the world go by.

Exhausted from the day's early start, we got back to the hotel again to rest and nap. We freshened up and were ready to leave the hotel by 7:20pm with a meal in mind before the water puppets theatre show starts at 8pm. 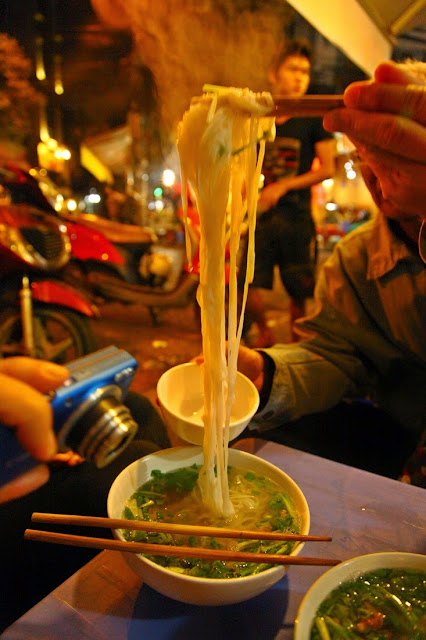 We chose another little restaurant around the corner from our hotel with little chairs and little tables and ordered Phở - the quintessential Vietnamese meal. The bowl came, piping hot with flat rice noodles, beef slices and chives.

It was obviously Mum and Dad's kinda meal (steamed/soupy, fresh, loads of veg). With 15 minutes to go till the start of show, we left and made our way to the theatre - which should only take about 10 minutes walk, tops. I forgot to take the map with me and decided to depend on my natural navigation instincts (I can hear you gasping already there).

So, um, soon it was 5 minutes till showtime and no theatre to be seen. I started to panic, and it was time to roll out Plan B. We hailed a cab who couldn't understand a word of English nor where we were trying to get to (Mum actually chided me for not learning a few words of Vietnamese before coming here). I tried to walk some more and hailed the next cab I see but it was the same person from before! He was just stalking us and capitalising on our desperation, the bastard. Mum had the brilliant idea of showing him our show tickets and he got it right away. We hopped in, 2 minutes' drive later and found ourselves at the entrance of the theatre. By the time we settled into our seats, the lights were dimmed and the show began.... 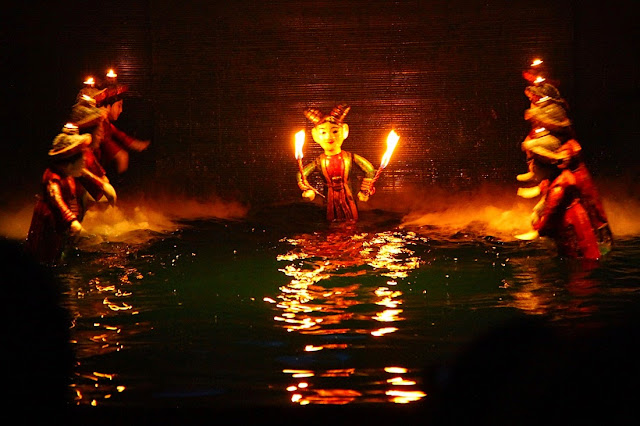 I have to say, I really enjoyed the puppet show. I won't spoil it for you, but I'll say it takes some serious skills to maneuvre those puppets!

And that's the end of Day 1 - in spite of some minor hiccups, it's been off to a good start!

The next day we were up early, well more so for Mum and Dad - They were up at some strange vampiric hour - 5 or 6am and started practising qigong while I snored away. The driver picked us up at 9am for a 4-hour drive to Halong Bay. Stopped at a crafts store -cum-restaurant for a bite. 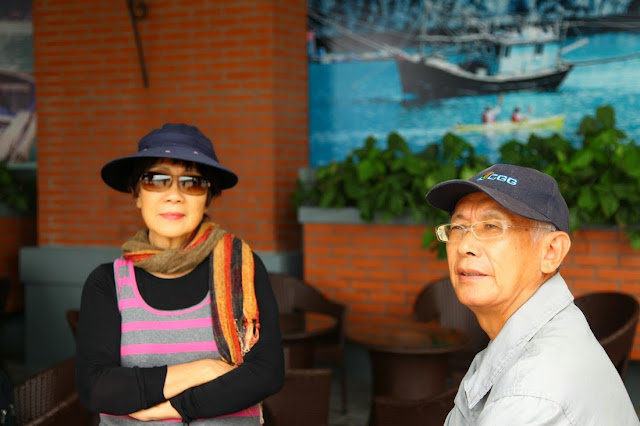 We stayed onboard the Jasmine. I was initially hesitant about booking a cruise. I mean, I spend 5 weeks on a boat at work and the thought of going back to the open ocean for holiday is not in the least bit tempting. 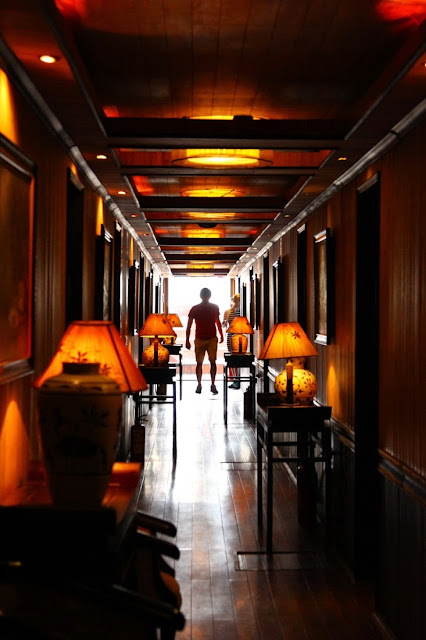 I am really glad I decided to spend two nights in Halong Bay, instead of just one. Beautiful boat, impeccable service and lots of fun. We checked in, then went through a safety briefing and also the itinerary for the coming days - plenty to see and do! After the induction, we were treated to a nice buffet lunch onboard - delicious fresh seafood (tempura squids omg!), Vietnamese salad, steamed fish and more. I'm not a big fan of buffet meals in general, mainly because mass production equals degraded quality, but this one here is definitely an exception.

A short rest later, we gathered again at 3:30pm for a trip to a nearby fishing village. 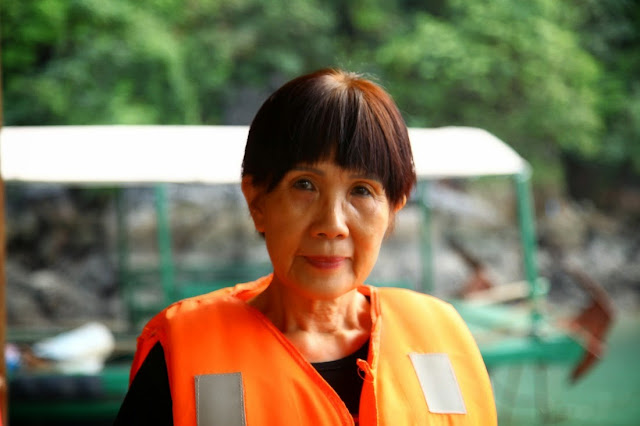 Wanted to go kayaking, but didn't seem like a good idea with my camera. So we opted for a bamboo boat ride instead. 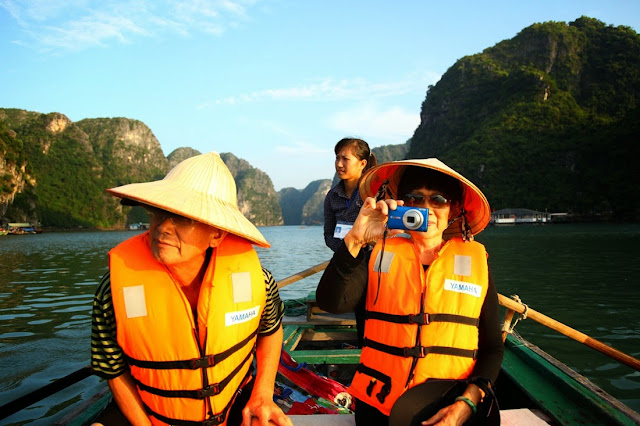 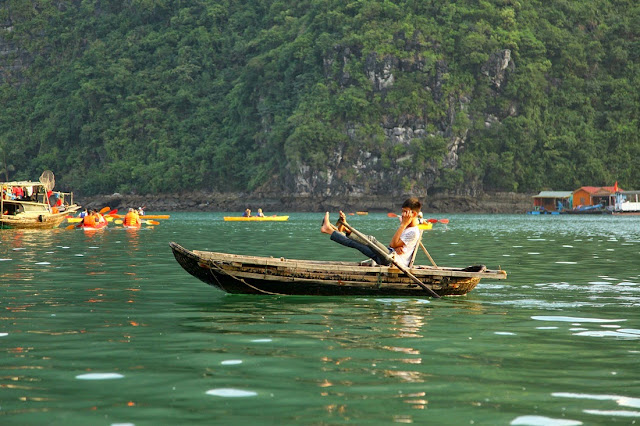 Multi-tasking at a whole new level, this.

Back at the boat, there is a fruit carving demonstration (I love how they have arranged all sorts of activities so we don't run out of things to do on the boat). We watched as the chef transformed a bunch of tomatoes into this beautiful, graceful fish! Then a watermelon into an intricate looking peony.

Dinner was a BBQ affair this time, was another buffet affair - and again, loved it. Steaks on the grill, squids, fishes, prawns, chicken and grilled vegetables. I especially love the dipping sauce - sweet and sour assam powder with a squeeze of lime juice. Phwar!

I think it makes it worthwhile to pay more for a better cruise. While on anchorage, what should have been a quiet and peaceful night (away from the city) turned awry when loud singing and cheesy karaoke songs pierced through the night. They came from a nearby cruise boat and from the looks of it, a bunch of drunk men onboard. Sheesh. 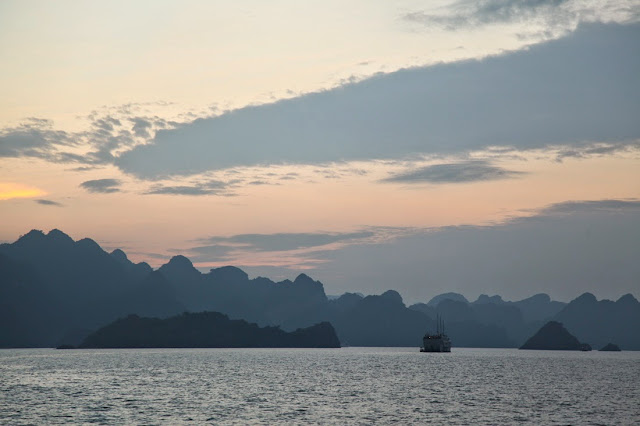 After a breakfast of coffee and croissant, we went up to the top deck for a tai chi lesson (lol). I tried my very best to muffle my laughs watching everyone else trying to mirror the sifu. 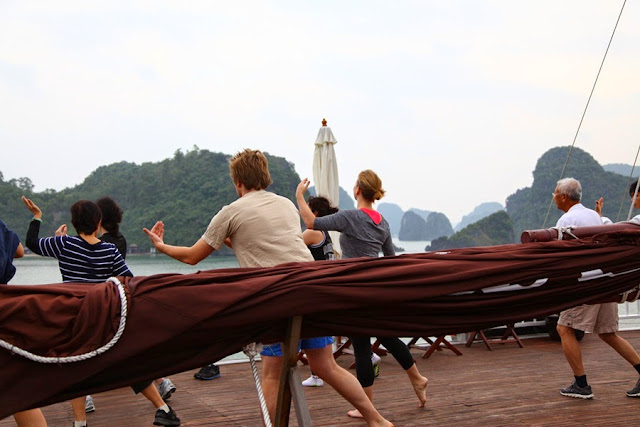 Our adventure continues on an island called Cat Ba. We spent a couple of hours cycling through the greenery and under caves - very pleasant. Well, I cycled while Mum and Dad were sat on the electric car hehe. Then we did more touristy things like a farm visit - we checked out a local farm and the animals, visited a local school while one of the boat staff taught us to speak a few words of Vietnamese. 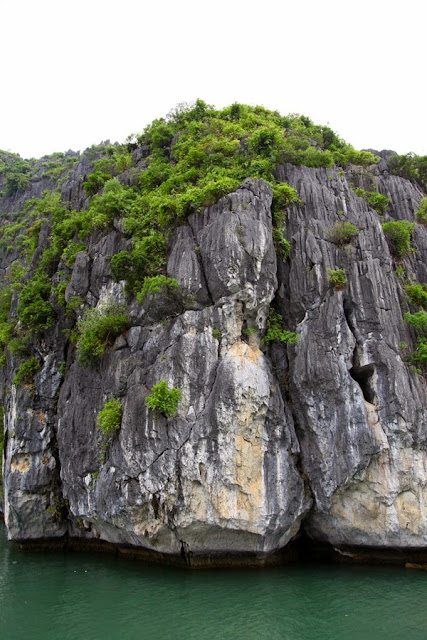 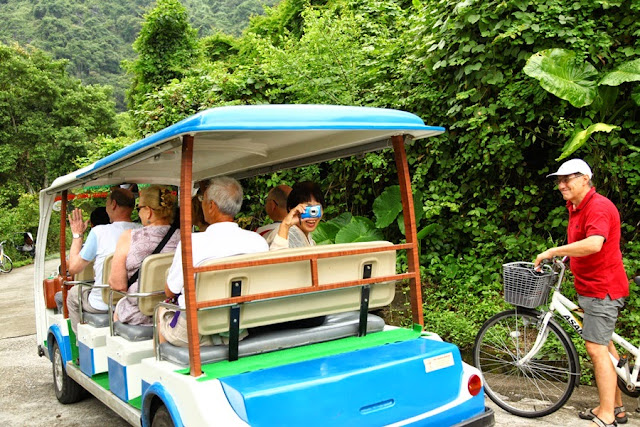 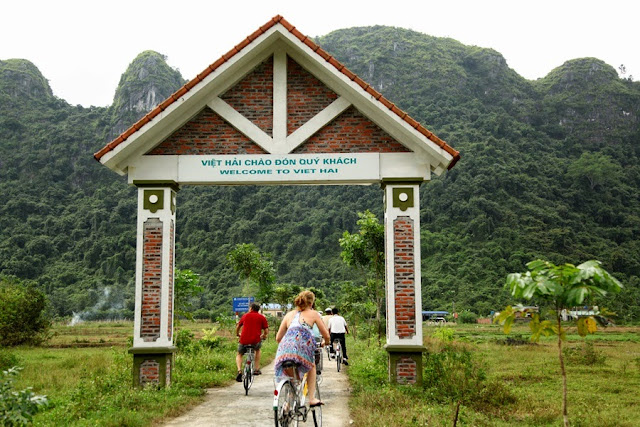 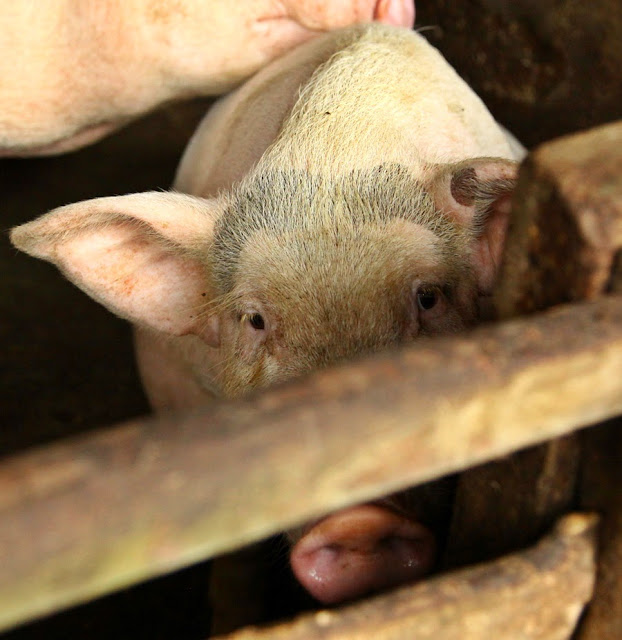 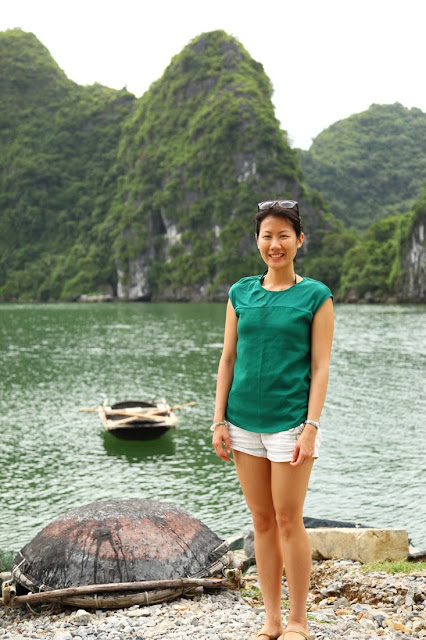 Lovely lunch after the workout!

Left- Salad of all sorts of crunchy texture, really. Finished all of them, even the garnish,
Right - Steamed rice with a sort of marinated chicken in turmeric and stir fried cabbage with a large herb leaf - yes it is edible, very nice! The ingredients all seem so simple but they really hit the spot.

I can't get enough of Vietnamese food. They incorporate lots of greens in their diet and it shows. You can hardly see any obese Vietnamese. Some of the workers I saw in shops have packed lunches from home - none of those fast food crap. 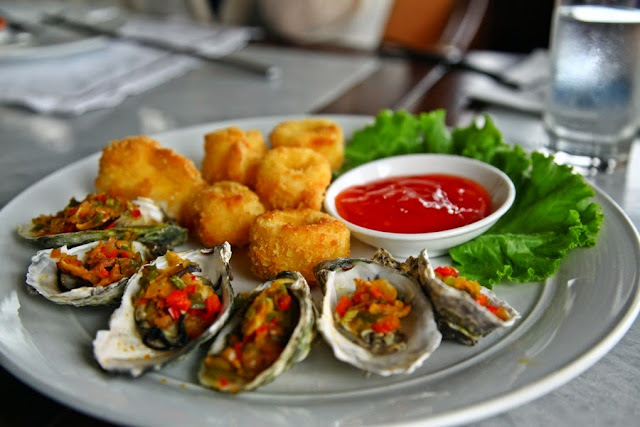 Crumbed scallops and baked oysters with chillis and tomatoes.

After a generous lunch, I burned the calories on a kayak. Mum and Dad stayed onboard. We kayaked under the caves and around a little 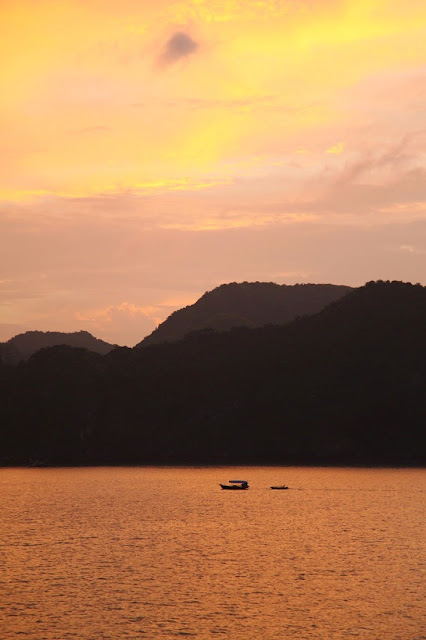 Have I mentioned that the boat staff were really accommodating? Most holidaygoers spend only a night on the cruise, so the BBQ is set up every night. But as we were staying for two nights, we have the option to choose an a la carte meal of authentic Vietnamese cuisine for our second night meal. How thoughtful! 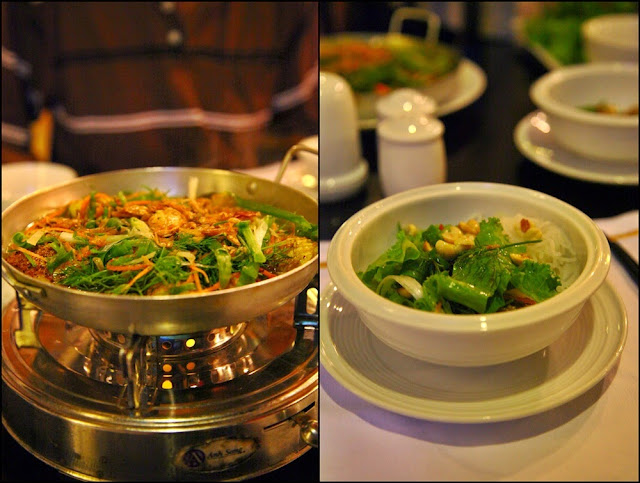 For starters we had spring roll, followed by salad! But the star of the meal is the Cat Ca - pronounced Chut (as in "hut") Ka. Fish cooked over fire in oil and a dozen other herbs and vegetables. The fish is served with some rice vermicelli, more greens, chopped peanuts and drizzled with a sweet and sour sauce. Super! 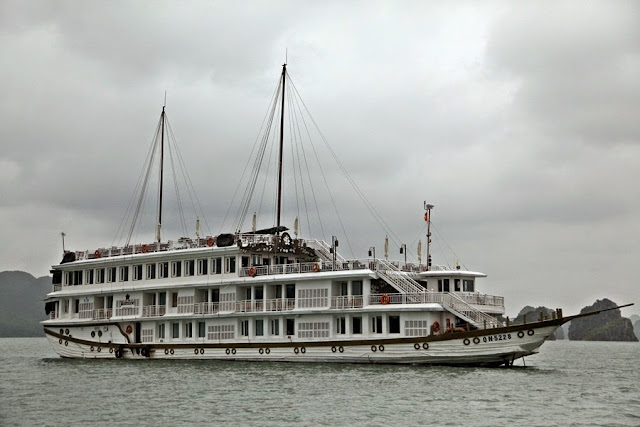 Overcast day - not great for photos but pleasant enough to hike. 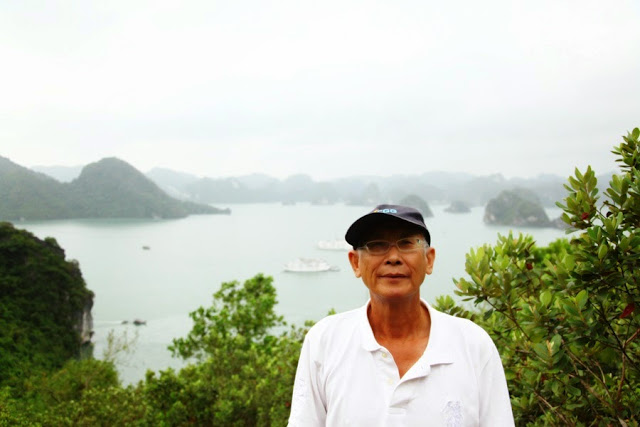 Hiked up the scenic island (about 400 steps or so) on our last day in Halong Bay, but not too impressed with the view. Ended going up and down a couple more times just as an exercise. 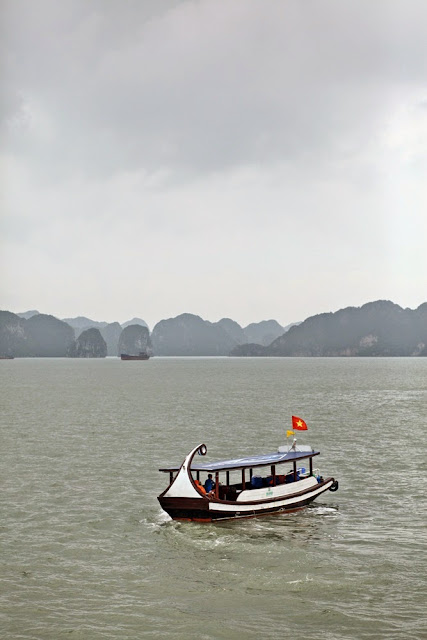 And no, at least the scenery isn't as depressing as a 360 degree of flat blue ocean. The Halong Bay is indeed beautiful and definitely worth to spend a couple of nights in.
Posted by Su Yin at November 25, 2014
Email ThisBlogThis!Share to TwitterShare to FacebookShare to Pinterest
Labels: Around the world - South East Asia
Location: Hanoi, Hoàn Kiếm District, Hanoi, Vietnam