Across the Causeway: Portkey me to Porky Porky

Found some real cheap flight tickets to Singapore and snapped them up. Arrived late Thursday night, much to the annoyance the cousin residing there hehe. Well, all negative vibes diminished once they see that we brought along a few packets of Penang's Indian mee goreng heheheh.

Got up not-too-early on Friday morning, took a cab to Dhoby Gaut then later killed time in Singapore Plaza because Sue Wern only gets out for lunch at 1pm. I love Singapore. Escalators around the MRTs are fast-paced, which should definitely be the case, considering the vast amount of passengers using the service. Everything is efficient, you only need one single EZlink card for traveling. You can afford to wear a skimpy top without having some low-ass passer-by raping your body with his eyes. There are so many interesting characters in this city that I could just buy myself a cup of coffee and sit by the sidewalk all day people-watching.

Sue Wern brought me to this little shop in Chinatown for lunch which she claims serve one of the best xiao long pao. I duly obliged and noticed that the shop has rows of photos with the chef pulling the la mian with customers at his side lol. Every. Single. Piece. Same pose, Different customers.

Photos courtesy of TY. By the way, my camera's ill and I might be getting a new one :( Great fun catching up with this lady who has been missing out for so long. She persuaded me to work in Singapore, but I am just not sure. One thing for a fact is that the Singapore center has so many talented, smart and hardworking employees that I doubt I can out achieve them or even bring myself to work hard. I am a true lazy worm, that's me.

Completely forgot to bring my camera along, so no pictures of the xiao long bao hehe. But it's seriously not bad la. Next time I will drag SW along just to snap a few photos. SW recommended me to try the Marina Bay Sands casino, and that's exactly where we were headed next! Took the train (freaking cheap, 70-80 cents one way) towards Marina Bay and then a bus to the jaw-dropping monumental Sands Hotel. 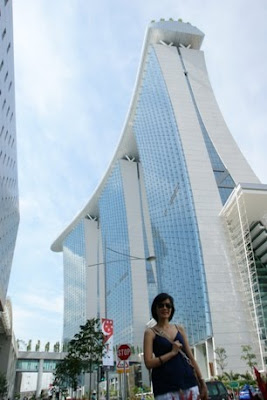 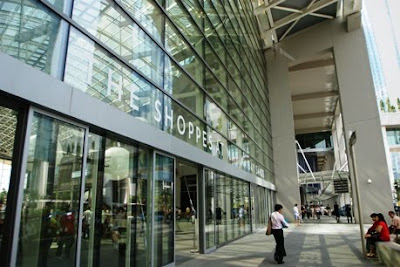 Checked into the casino and photos are not allowed of course. But I think if I had my compact with me then I would definitely sneak a few shots ;) The casino is vast, I think it's been ages since I last went into a casino. Credit cards swapping, stacks of chips placed on bet (minimum bet, what, $100?). Being the cheapskates and the poor souls we are, we played the slots machine (minimum bet a dollar hehe). And what do you know! TY and I both won about $70 net profit. TY made the bigger contribution when he got the superior 7x eagle lol. Secret to gambling is knowing when to stop. We cashed out, not before we eyed this old uncle who traded in his cash slip with over $1000 worth of cash. Amazing. In one day. 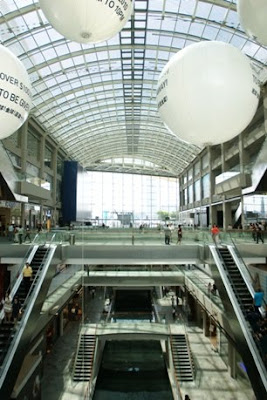 They have this little Venice concept, except sampans are used instead. 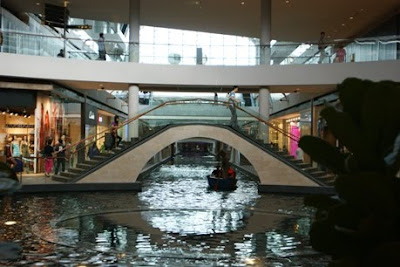 $70 for half an hour on the slots. Not bad for fast income. Before leaving to get showered, we made a pit stop at the Sands Hotel. 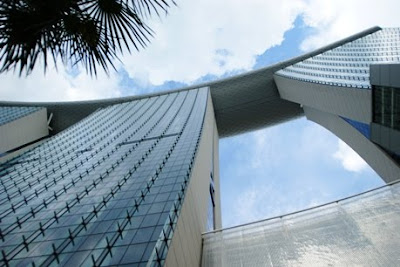 I'm not quite sure how to make sense of the architecture. Some say that the Singapore government has predictions of the end of the world and has made preparations for the great flood or some sort. And there you have it, the modern day Noah's Ark. 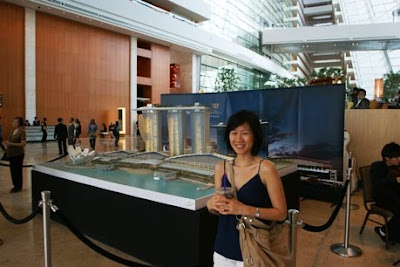 I am totally in love with the natural lights that flood into the building through the high ceilings. 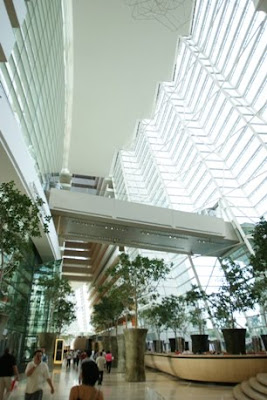 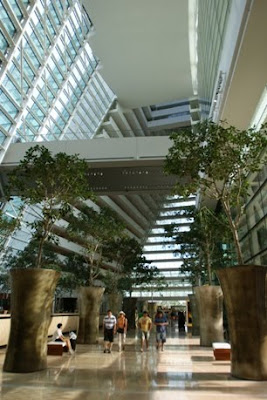 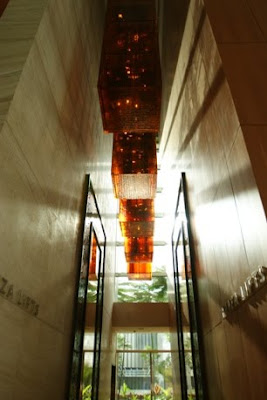 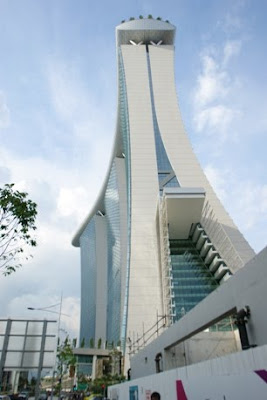 After a quick peep at the Sands hotel, we took the train back to Lavender where my cousin picked us up, showered and proceed to tick off one of my checklist to do in Singapore. 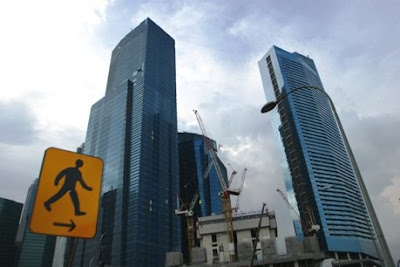 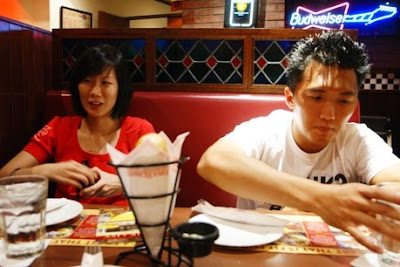 hehe.... I know it's probably one of the last things one would do. Typically on a foreign land one would prefer to sample local stuff but I consider Tulang Rusuk Babi not to be a Malaysian local ;) Anyway, Malaysia's TOny Roma's only serve halal stuff, read: beef ribs which sounds ugh.

We ordered enough to feed a whole village. Ian did most of the ordering and I did all the nodding.

A great meal starts with a healthy salad! Ngeh ngeh. 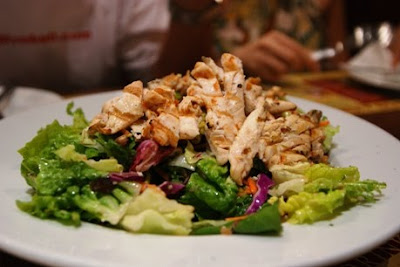 Chicken Caesar Salad. Caesar Salad topped with grilled chicken strips. Don't be fooled by the seemingly mediocre size of the plate in this picture. It's freaking huge! Has blue cheese in it which I have problems adapting to. 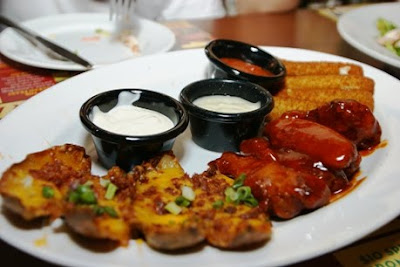 Appetizer Sampler - Fire Wings, Potato Skins, Mozzarella Sticks with three dipping sauces. I love the potato skins! Has bacon bits and spring onions with melted cheese on it.... T-T The skin coupled with the bacon bits are crispy and as you sink your teeth further, you are greeted by the soft potato within. Oh, the Fire wings, or buffalo wings like that also suparbo! Love, love, love.

The Original Baby Back Ribs. 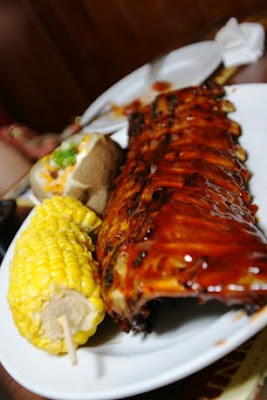 With corn on cob and baked taters on side.


What I think? Hmm..... It's lovely no doubt but somehow the ribs tasted, for a lack of better word, practised to me. I dunno how to explain la. The meat is very tender, they fall off the bone at the slightest pressure. Taste wise, like I said, practised? Rofl. Not really what I expected but then again it didn't exactly fall below expectations. Worth a try but I think I love the fire wings and potato skin more :D

Ok, after bathing and coming back to blog, I think I have something more meaningful to say rather than 'practised' lol. Me thinks the ribs are very moist, which I have no problems with that, if it's within. I think I expected more of a drier outer layer crust. 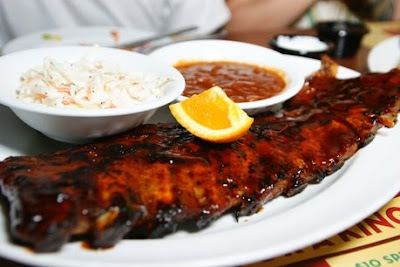 
I definitely preferred the original one as compared to the honey version. Coleslaw is good but the ranch style beans is ugh! It feels so filling, like it expands evermore once it has settled itself in your tummy somewhere. I think I only managed 2 spoonfuls but that glutton TY wiped the bowl clean. Yuck. Later on only found out that Ian Kor Kor doesn't eat beans. If I had known, should have exchanged that for the corn on cob which is fab. 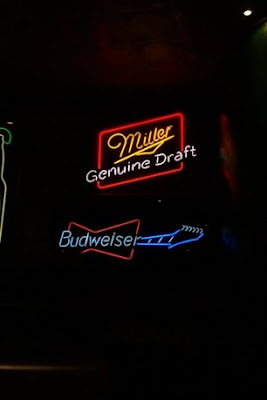 Okie, dinner has ended, but it's not the last meal yet! I need to edit some photos first, then I'll update on our little detour to Marina Barrage :D
Posted by Giffo Hoots at July 24, 2010
Email ThisBlogThis!Share to TwitterShare to FacebookShare to Pinterest
Labels: Around the world - South East Asia