Across the Causeway: The Hunt - from Mustaffa to NatGeo

After that calorie-laden meal, it's time to wish for more fortune which in turn will reward ourselves with more calorie-laden meal! Went to the centre of the palm of Suntec City to dip our hands into the Wishing Fountain. 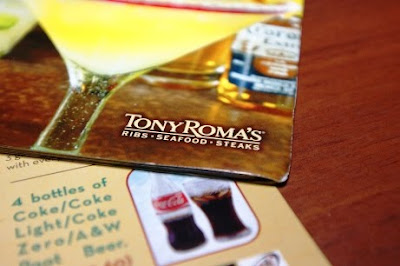 Forgot to include this shot in the previous post, so here it is. 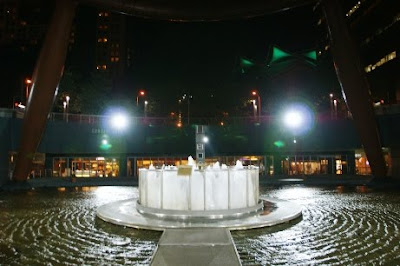 Ian then brought us to the Marina Barrage for a great night view of the Singapore skyline. There were people there attempting to fly kites (I used the word 'attempt' because there was barely a hint of stunted breeze - some kites managed to stay up for quite a while though, surprisingly). 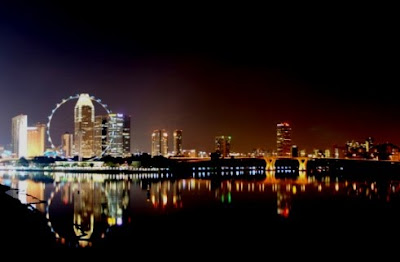 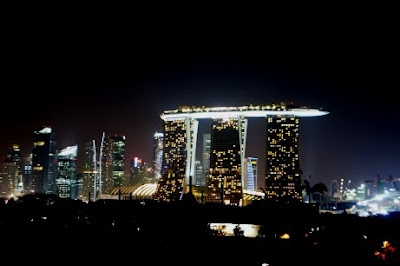 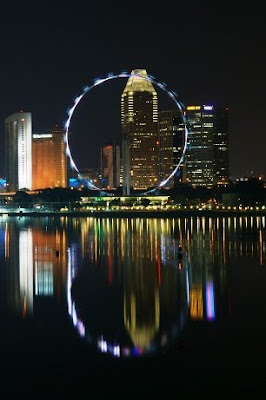 The Singapore Flyer. I still recall my experience on it a couple of years ago. Expensive and during that time, constructions on Marina Bay was still ongoing so the view wasn't that great. A complete revolution takes roughly half an hour. There's also a VIP pass you can purchase where you get a whole capsule for yourself and even organize a 30-minute cocktail dinner or whatever. 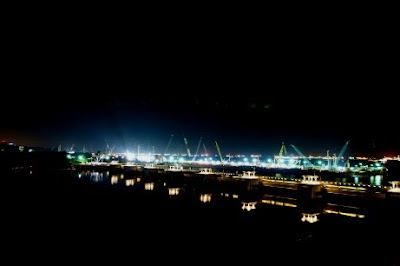 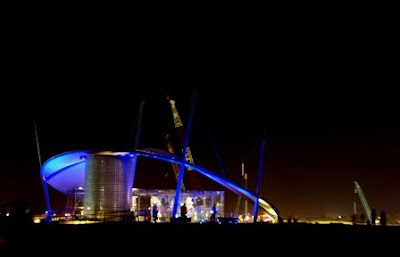 
One of the items on my To-Get List is a pair of Ray-Bans. Evan has been raving about getting them in Simlim Tower whereas me cousin said that she would bring me to Mustaffa, where everything under the sun is sold, 24/7. You name it, they have it. Stacks of genuine Nike shoes are strewn on the racks like goods in a pasar malam. Tempted to purchase a number of items (Current wishlist - Deuter regular backpack, a pair of new sandals and a few dri-fit tops / shorts / pants for gym)... pokai :( Walked out of Mustaffa empty handed though :D

To make up for the single digit burnt calories hiking up and down the Barrage and around Mustaffa, Ian drove us to Lorong 27A Geylang for a bite of supper and also a bit of ogling. 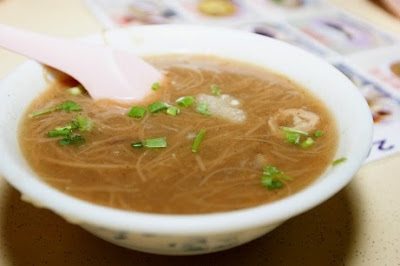 Taiwan oyster noodles - This is a must-have! The gravy has a slight burnt taste but somehow it adds character to the dish. Couldn't get enough of it. 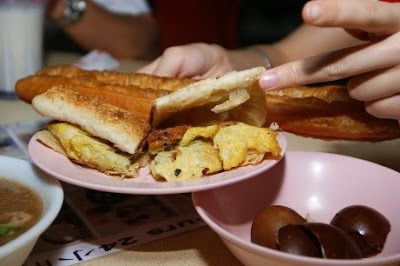 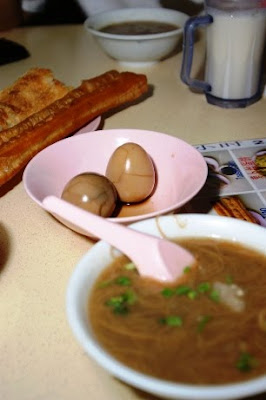 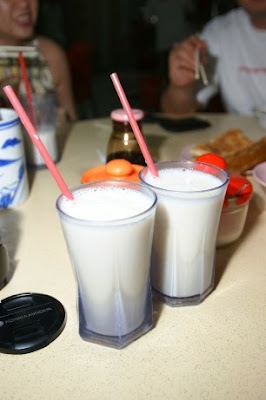 Jeez, now it sounds like a lot for supper. Washed down with soy bean drink. 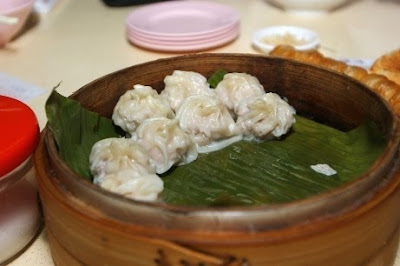 Xiao Long Pao the tipu edition. No soup in the pau wan. Tipu. No like. 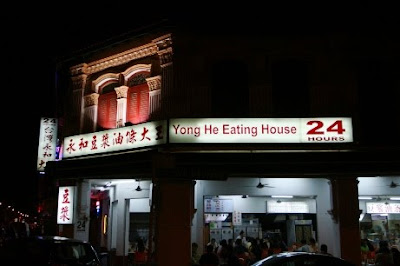 Tucked in bed really late, probably close to 3am. Naturally got up when the sun is already close to its highest point in the sky. Min CC brought us to Toa Payoh, one of the earliest HDB residential allocation area in Singapore. We were there on a mission to get my dream sunglasses lol.

Brunch at one of the food courts there - love the cleanliness. One lady dropped her tray of hokkien mee noodles, and a couple of minutes later, the place is already spotless. Gotta love the efficiency.

Ian recommended me to try the Hokkien prawn noodles, Singapore style. The noodles are moist-ish and mixed with the sambal, I think it's similar to our lam mee? Except not that sticky and doesn't have prawns. 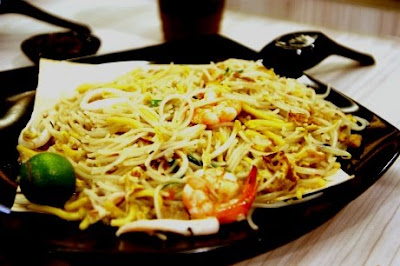 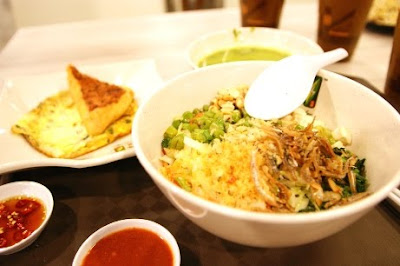 TY and his lui cha. Tastes great too. Min CC related that when she first moved to Singapore, she lost a lot of weight because the food here ain't that great, compared to Penang. But once you're there long enough and discovered the hidden treasures of where some of the great food are, you're bound to be well-fed for the rest of the term in Singapore. I have no doubts with that, since MCC is a full-moon feature now :D 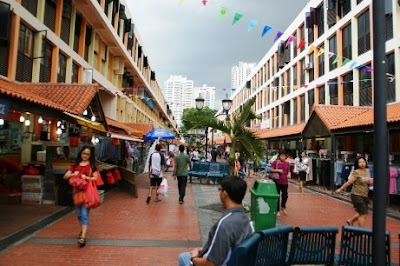 Lucky in the food department, but not so lucky in the shades. Did made my first purchase there though, an Adidas Climacool top and that's it. I did fell in love with an Adidas sporty shades wah super cool, adjustable frames and absorbent layer on top of the frame but it is waaaaayyyy out of my budget - SGD 350 after discount. *faint. 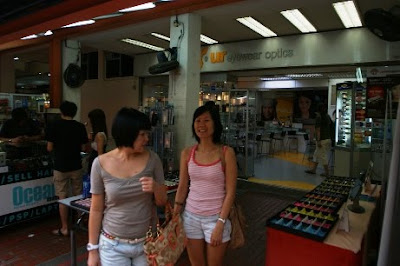 Me likey this shot because I looked tanned - well, compared to Min CC.

We resumed our shady hunt mission in Vivo City. 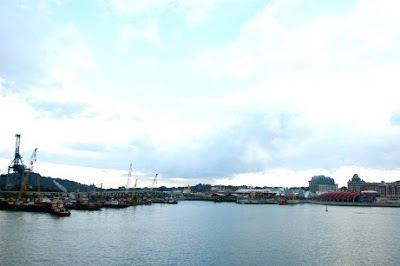 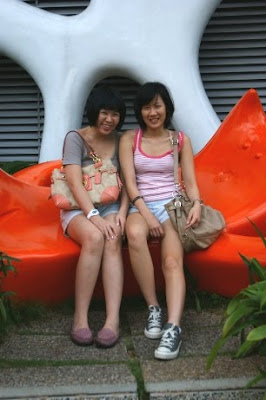 MCC said I look chor lor in this shot lol. Buka a li'l kangkang than her only lol. 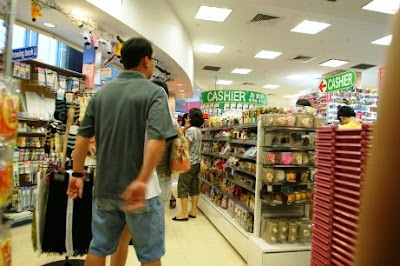 There's a cafe within the store, exhibitions, T-shirts and bags for sale. 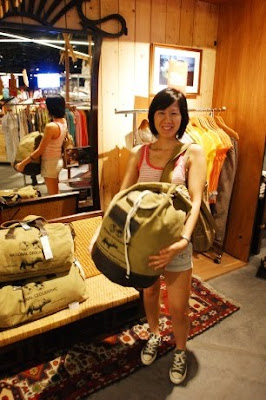 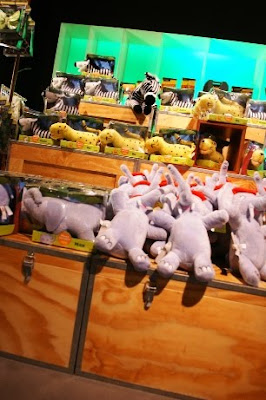 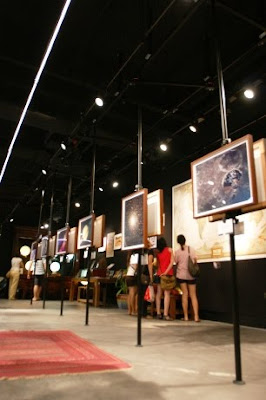 At that time there was an exhibition on Mattias Klum's work. Googled and found the picture I was drawn to in the store. Check out his other works too. Brilliant. 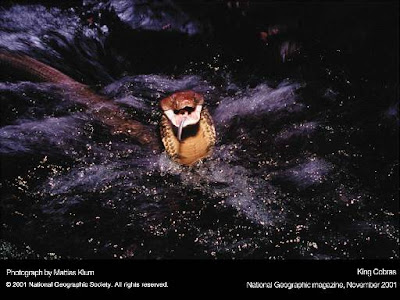 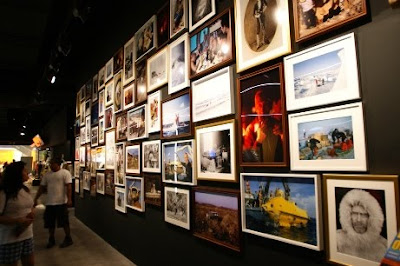 There's also a small room where u experience temperature in the sub-zeros.

Ending with a photo of me and MCC in a cable shuttle on top of a hill which I can't remember the name lol. I suck at memorizing names. Live with it. 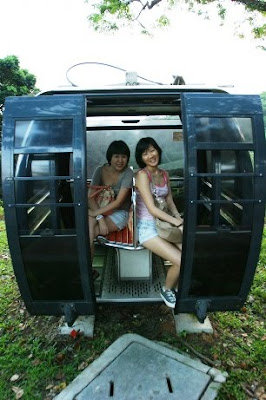 Posted by Giffo Hoots at July 24, 2010
Email ThisBlogThis!Share to TwitterShare to FacebookShare to Pinterest
Labels: Around the world - South East Asia