Hit on the Rewind

I know I'm totally outdated but I'm just only going to blog about my Xmas and New Year's Eve celebration hehehe.... Completely busy with searching for a new place, with work and everything else. And would you believe that CNY is coming up next week, OMG!!! I haven't even went shopping for Chinese New Year clothes :s I think I'll just have to wear something I've worn before, but since no one back home has seen it, it'll pass off as something new :D 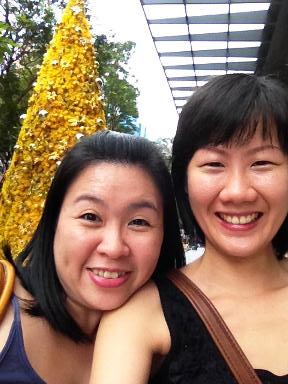 Xmas eve, walked around Orchard, window shopping and had coffee and finally my fave popcorn! I love the caramel ones at Garrett's. Way overpriced but it's worth to give yourself a treat every now and then :D Then headed to Novena to collect the turkey (yes MCC cheated hehehe) and headed back pronto to finish up with preps! 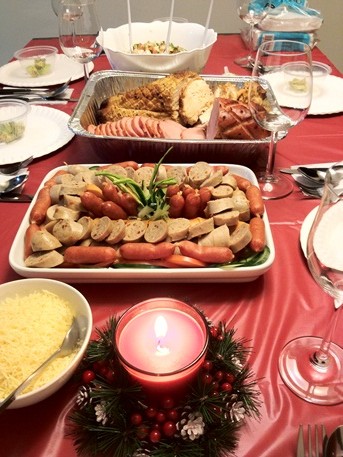 Christmas spread - this is obviously a carnivorous dinner! Sausages, hams, turkey, meat piling on one another, it's sinful enough to lay your eyes on these, let alone to finish these...

Anyway, special occasion cos friends of MCC were around..... Great people, with a lot of funny stories to share :) Check out the only handmade additions to the sausage platter... LOL! Miscellaneous greens to vegetari-ze the meal! We poked some cucumbers to create a Caribbean team leh... lol. Epic fail. 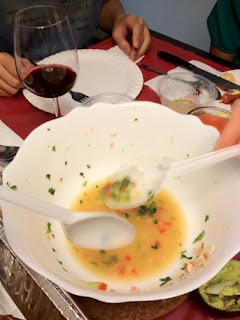 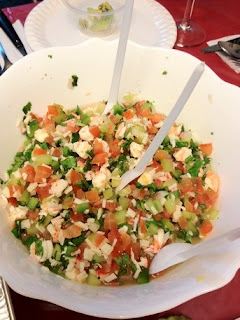 And yes... the only member from the plant family is the ceviche! Credits to Su Jen again for the recipe. Made this dish two Christmases ago in Kuantan. And as ever, it's an instant favourite *perasan* Anyways, sent the first shot to SJ and she reckons there's too much green in it. Had to kinda balance the meal y'know ;)

Prepared this the day before... Had it soaked overnight and SJ says to soak them in lime juice and so I did... with plenty of lime, so much lime juice it was too sour when I tested it the next day!! Lol.... Anyways added more sugar to balance it out and it was perfecto :D

I managed to avoid the Xmas crowd but I couldn't escape on NYE. Since I'd already turned Sue Wern and Chia Chia down to celebrate Xmas with MCC, I couldn't say no again...

So NYE, met up with SW and we decided to have a bite first before heading over to Esplanade. We stopped by Umi sushi where they sell sushi on the go and we bought a few of them and proceed to the seats. As I was taking out the disposable chopsticks, the tiniest of bamboo splinter went right through my index finger! I tried plucking it out but my nails were too short and to make matters worse,  the splinter went in deeper! Not only I succeeded in pushing the splinter deeper in, but also broke the jutting end -.-

SW was really nice, she went to a convenience store to get a nail clipper and I tried clipping the skin around the finger in a feeble attempt to get the splinter out. The pain was still bearable but the thought of having a small piece of wood under your skin just wasn't comforting!

Either way, I had to push the thought aside and we went to Esplanade.... Walao! I tell you... there. was. so. many. people!! I can't believe Singapore had the capacity to hold  such a large number of people. If I didn't know better I'd have thought that Singapore sank a couple of inches deeper every major festive season.

We had to literally swim through the crowd, to get to the eatery. There wasn't place to sit and we didn't bother looking anyways, so we tapao-ed chicken wings, fried rice and onion omelette and went to find a small space to sit and eat. LOL. You wouldn't believe where we ended up.... It's just a small area between walkways. 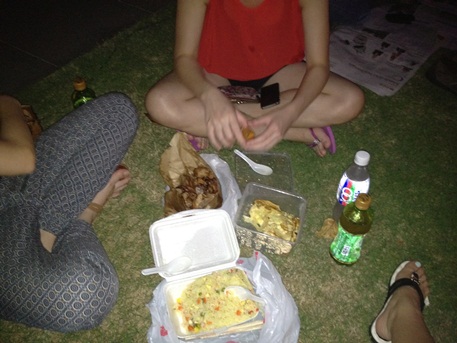 I felt sad for myself at that time... thinking that I could have been sinking on a large plushy couch and watching the fireworks comfortably at home but CC was like darn excited to sit on the grass and eat. -.- Fried rice was really bad, no taste at all, omelette was extremely greasy but chicken wings was good though I didn't have much of those because I just overdosed on chicken wings the night before -.-

It wasn't a good idea to watch the fireworks at Esplanade because the whole stretch overlooking Marina Bay Sands was lined with palm trees -.- Plus, the front harbour overlooking the waters was already brimming with people! It was nightmarish, even more so to the claustrophobic I think. At that point I was beginning to regret my decision to head to one of the busiest places for NYE. And the nightmare is far from over! 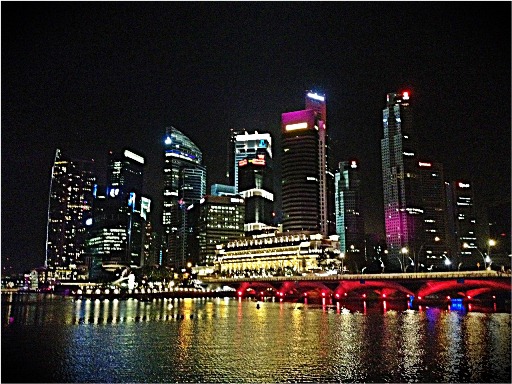 Okla, to be fair, the fireworks are really something to be amazed with. The display has to be the best I've ever seen! I also took a clip of it - the whole 8 minutes, but it's 1.5GB and Facebook, Blogger all refuse to let me upload it :( 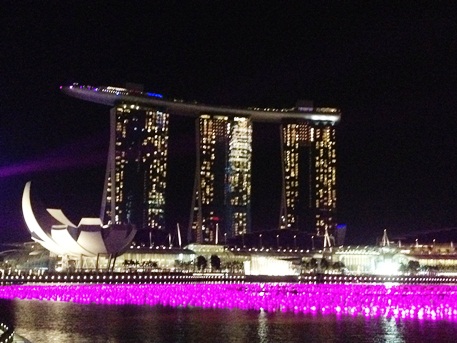 I love the night skyline! Never fails to awe me... So continuing off where we left from the nightmare. After the show of fireworks, we ma decided to head back lor. It was already close to 1am. CC decided to leave with some of her friends so it was just me and SW. We walked towards Raffles Place MRT and guess what? The whole area was filled with MORE people trying to get into the MRT! It was a crazy scene. SW and I, we were looking at each other helplessly. I mean, I've heard of stories from friends and colleagues about how crazy the crowd can get, how impossible it is to get back afterwards, but I always took it all in with a pinch of salt. Now I understand the full weight it bears. Too late :S

So we thought maybe we should just walk further along and see if we can get into that MRT instead. We walked towards Tanjong Pagar using Google maps lol. Oh yea, my phone battery some more almost dying out on me! Talk about a horrible chain of events lol. We walked close to 30 minutes before checking that we are also near to the Chinatown MRT. Thank goodness the service was still within the extended hours and the place was close to deserted! We hopped into the train, and I reached home slightly after 2am.... If we had joined the massive crowd in Raffles Place... I think we would only be able to get back at 3 or 4am. It was madness... 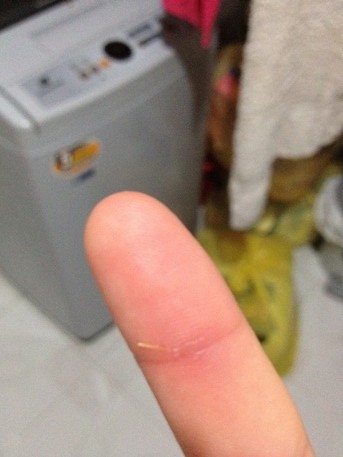 And the splinter? After getting back all hungry from the long walk, I heated up leftover pasta and after washing the plates, I realized that the skin on my fingers were all soft and I pushed the splinter out by pressing on the other deeper end. Amazingly it works and here it is in its full glory, seconds before I chucked it into the bin.

Posted by Giffo Hoots at January 15, 2012
Email ThisBlogThis!Share to TwitterShare to FacebookShare to Pinterest
Labels: Occasions