The Cellular Jail & The Chaotic Market

Second trip to India, finally got some time to explore Port Blair! Otherwise it's usually cooped up in the hotel after spending long hours in the plane, in transit... you get the idea....

And where do we go sightseeing? Not the beautiful beaches... Not the museum... Not even the local town. We went to a prison... lol. Well, not just any prison. A historical prison called Cellular Jail where political prisoners who fought for independence during the British occupation were exiled. 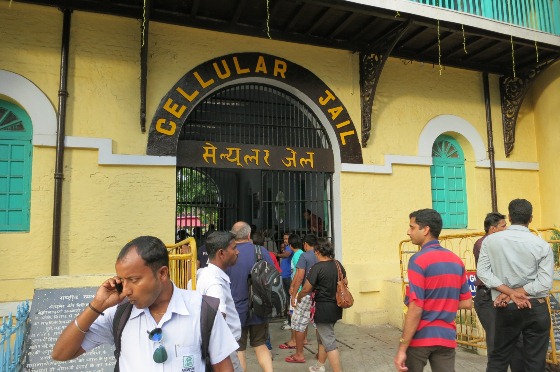 The jail is only a short drive away from our hotel - well, I think in the case of Port Blair, every other location is pretty much a short ride away... The town is that small... 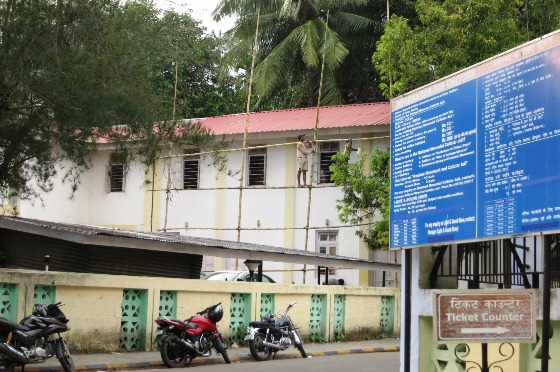 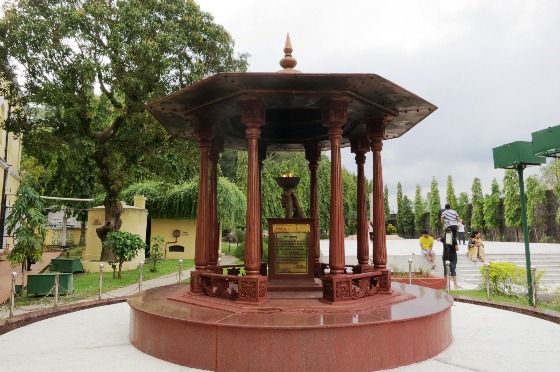 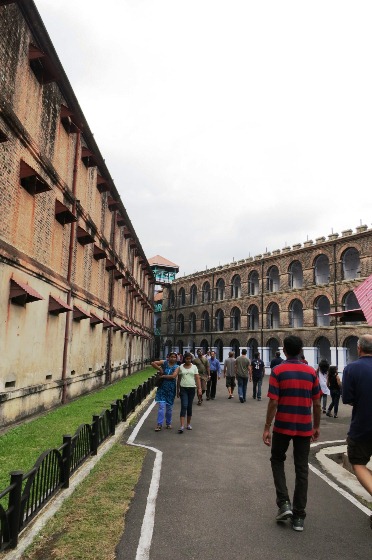 A little history lesson... The jail was built in 1896 by the British in an effort to smother the voices of the Indian freedom fighters. To exile them is a better term to use here. You will notice that most of the tourists here are Indians, you hardly see many foreigners. Which is a shame, really... I just wish that even basic hygiene is more practised by the local people. It's such a shame when a perfectly beautiful place like Port Blair is tainted with trash...

Digressing, there was once we were passing by a government building in Port Blair and first sight that caught my attention was the heaping amount of garbage that was lumped at the back of the building. It was such an eyesore, and then moving towards the front of the building, none of these could be seen! Just horrible.... 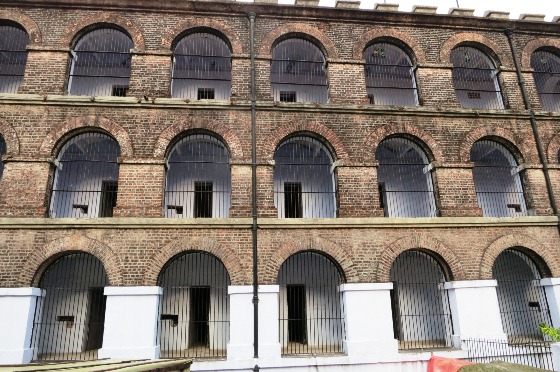 The bricks used to build the buildings were shipped in from Burma! 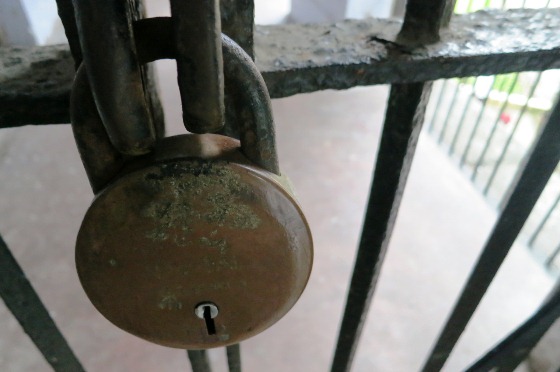 This quaint looking, chunky lock that you don't see around anymore... 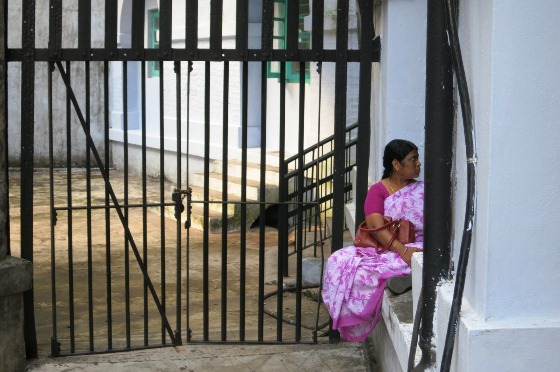 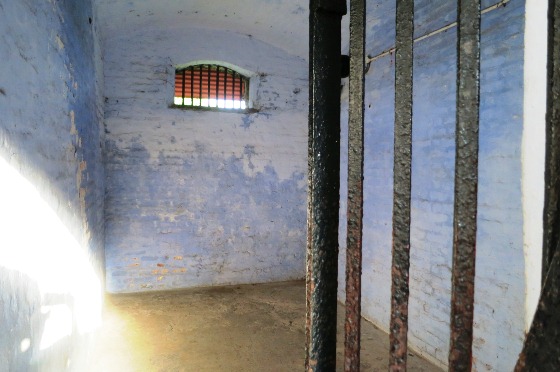 Each cell has a dimension of 4.5m x 2.7m with a small little window at 3m. Prisoners are in solitary confinement. 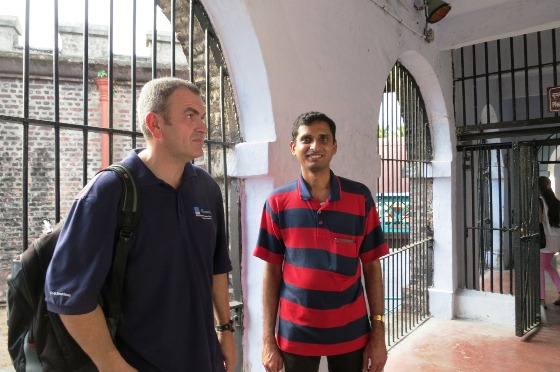 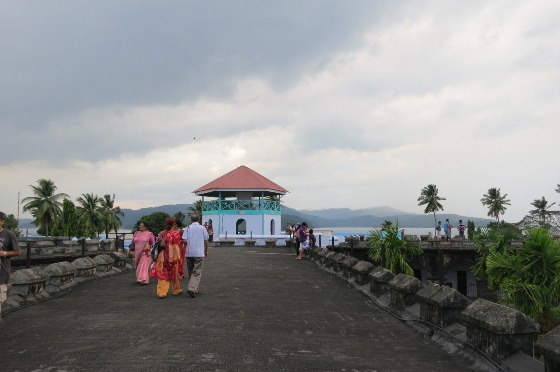 The tower in the middle of the jail serves the guards to watch over the seven wings (now only 2 wings are left). 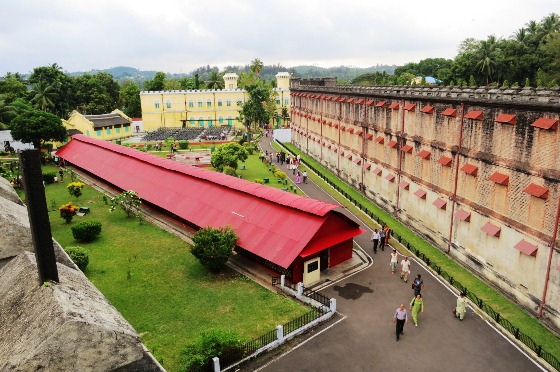 The wings are designed such that one wing faces the back of another wing to eliminate any possibility of the prisoners from communicating with one another. 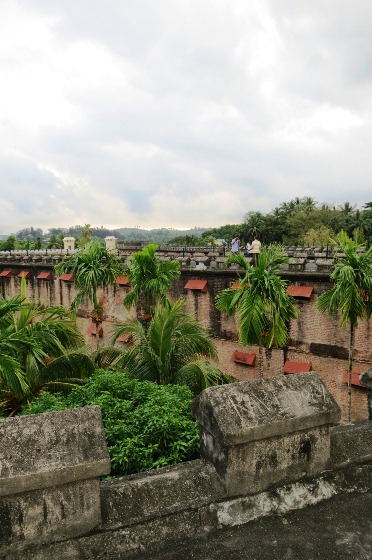 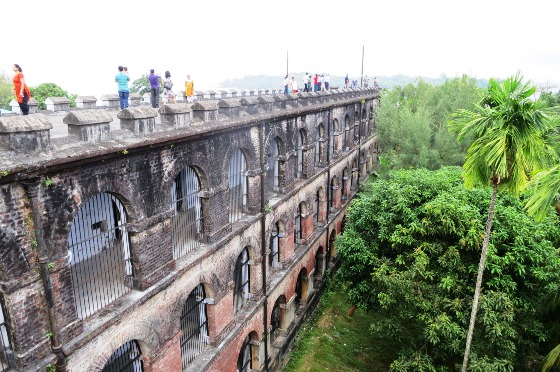 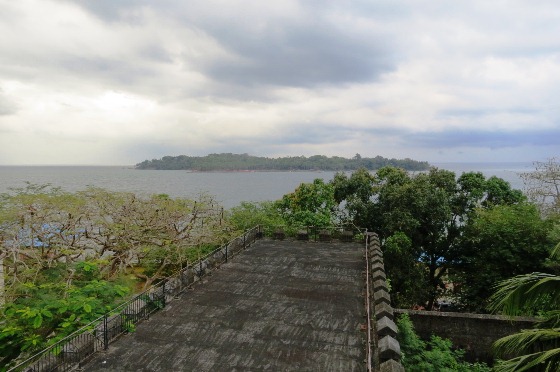 Prison term overlooking the Andaman Sea... Okla, the prisoners won't really get a view of this, but the guards do :/ 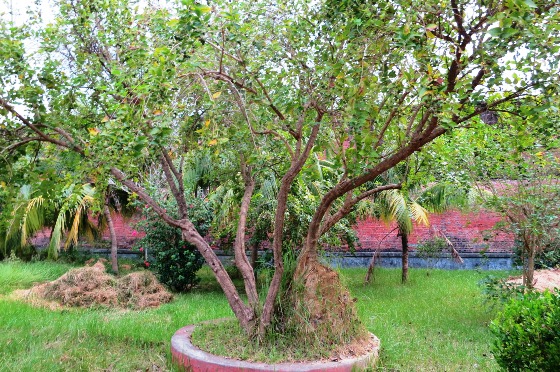 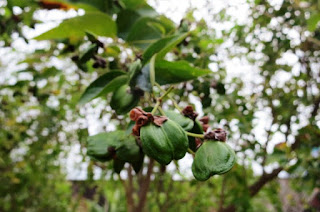 A tree that a passer-by pointed out to bloom only during the night and produces a fragrant scent. Also apparently good for joints lol. 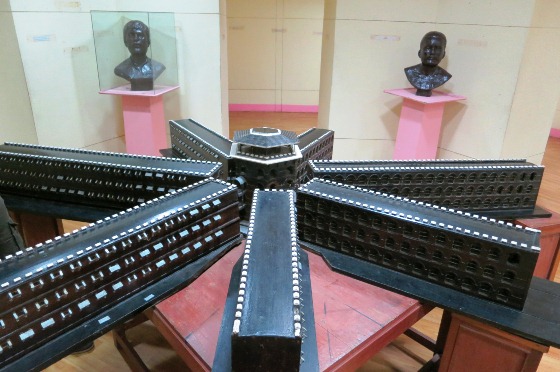 What the jail used to look like in this model. 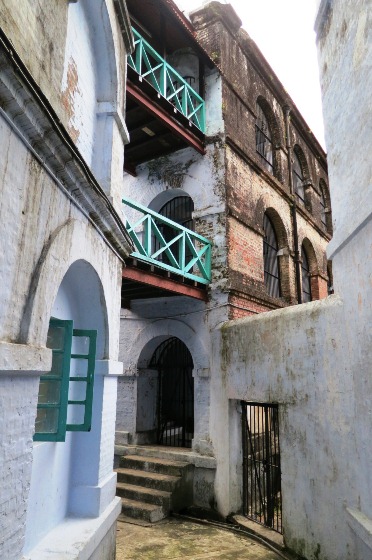 I really do think this is a pretty artsy fartsy shot, don't you think? :P 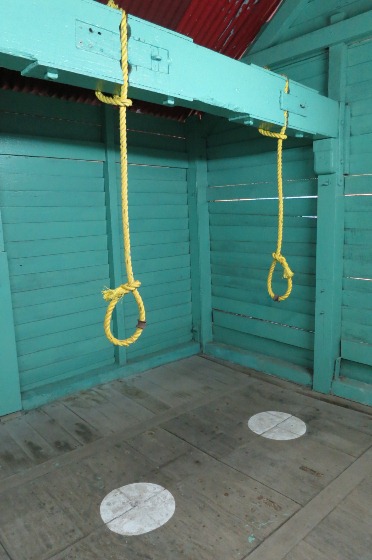 Always a nice touch to visit the gallows... 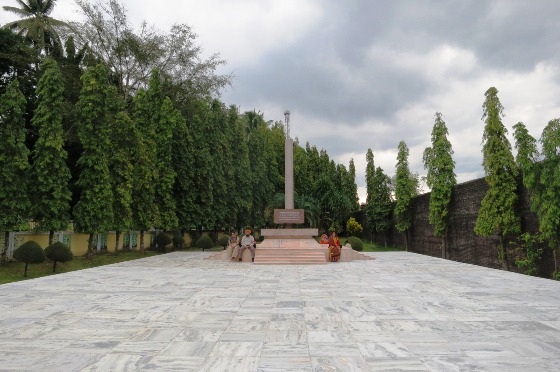 And a marbled memorial erected in honour of the people who have fought for the country. 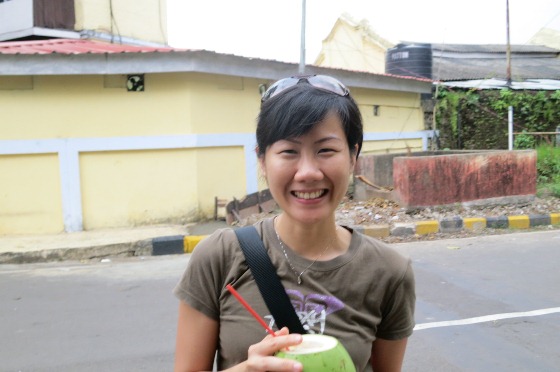 My first attempt at 'street food' in India! Lol... Ok, fine it's not exactly street food but fresh coconut juice, cut on the street side. I still think it's a risk taker! lol. 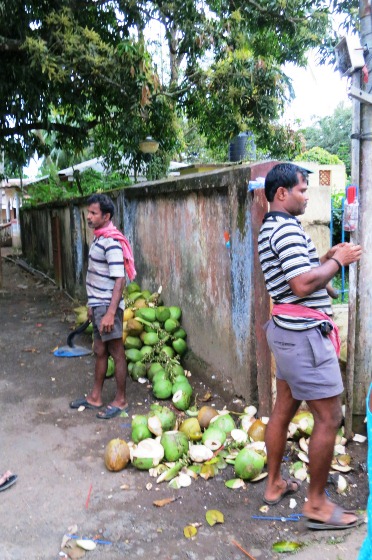 Not in the best conditions I assure you... Well, it seems I was bravest among all the other angmohs. None of them wanted to try the coconut. Venki, our Indian colleague asked if I wanted fresh coconut juice and I was game! Just something strange about the coconuts here though.... They're not really the sweet variety... but more of the salty kind. It was disappointing, to say the least :( I was hoping for fat juicy, sweet ones like the kind you get in Thailand :D

After the not-so-thirst-quenching drink, we were on our way to destination number 2.... the local market. 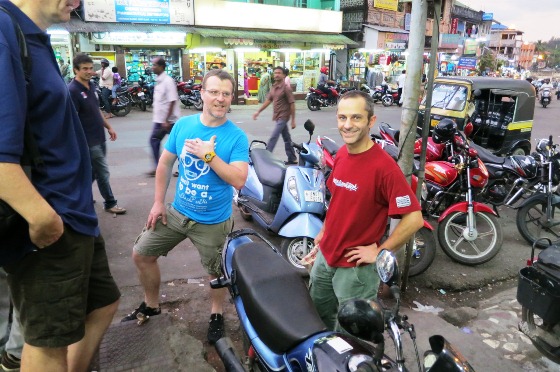 With bunch of angmohs drawing attention from the locals. 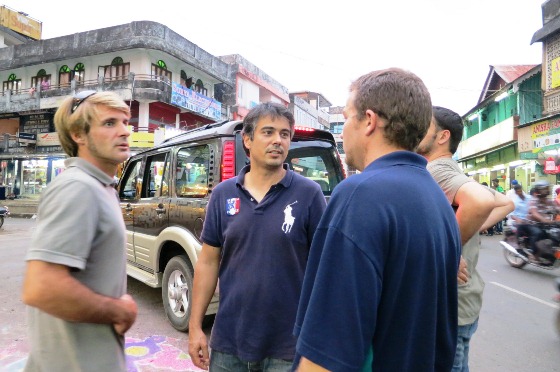 Didn't get anything interesting here.... Also because it was the start of the trip and I didn't want to buy anything to weigh down my luggage. There's a weight restriction on the chopper to the vessel, we can only carry 12kg worth of belongings :( Bleargh.


There's just something about India that gives it a dirty, unhygienic kind of vibe. Not sure if it's just the dust, the people or the colour of the buildings? Hmm... 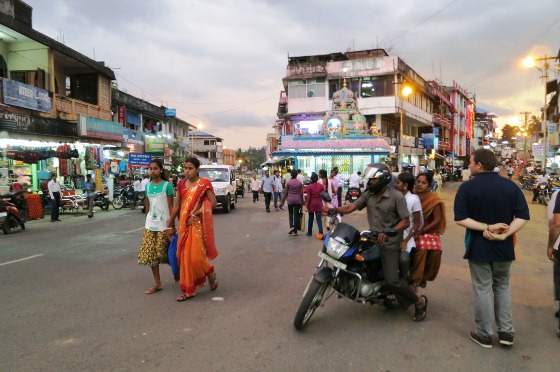 The roads are chaotic - I lost count the number of times we were honked at hahahaha. It is a gamble of life to cross these roads here in India but I trust that it's actually way better here and 'organised' compared to say, Chennai, or Mumbai! Can't imagine what it's like there now.

I quite like this shot on top unfortunately it's slightly marred by that one angmoh at the bottom right corner :/ 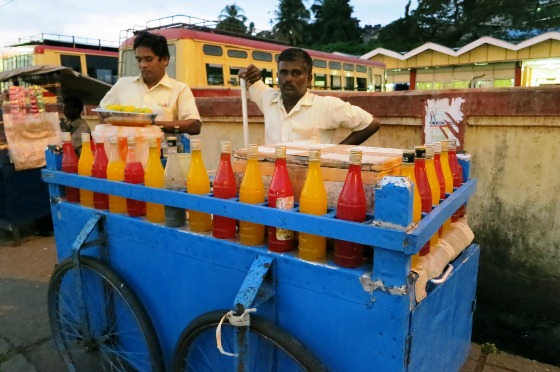 Street vendors selling colourful juices, dare you try them?
The other angmohs again decided to take the safe way back to the hotel via our designated van and driver but three of us - Venki, Denis (the only brave and adventurous French with us) and I decided to hire a tuk-tuk. Lol. I LOVE open-air rides! 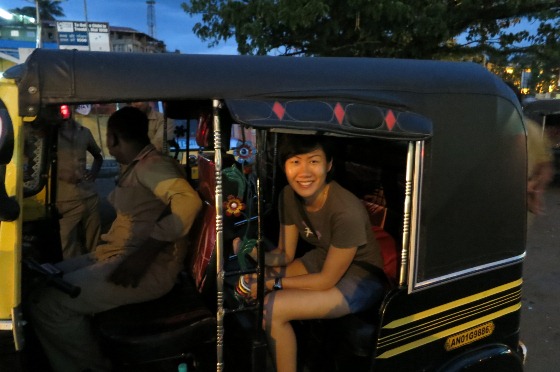 Like all tourists, die die must take one photo with tuk tuk lol. 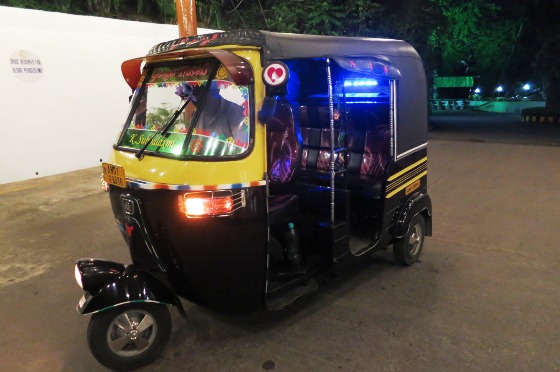 It's actually pretty safe... maybe there's three of us, so the tuk-tuk, being heavier, couldn't speed as fast as it usually does hahaha but we still got back to our hotel in one piece (Amitabha). The tuk-tuk driver even humoured us when Denis requested for a song to be played, like a Hindi dance music lol. But this driver only had some boom boom songs... sipek luan hor....

K, that's all for Port Blair. Keen on extending my stay next time for dives.. hmm....