This happened quite at the last minute when Irwin pestered me to accompany him to join him in watching the wrestling show, which Irwin referred to as being similar to the SuperBowl. It is also the Wrestlemania's 25th Anniv. Everyone else is either not interested, or wanted to spend more time on their presentation work.

Lol, as for me, I am quite interested and I didn't want to be spending my whole weekend working on some stupid 15-minute presentation :P Okla, to be fair, I was quite hardworking throughout the weekdays so that I can properly enjoy my weekend.

We bought the tickets online. Initially Irwin wanted to get the $40 seats but I was a bit reluctant on that part. So we checked the tickets and in the end, got the $25 seats, lower prices would be $20. Anyway they also charge $10 for convenience (that's what you have to pay if you do not want to go to the stadium to get the tickets. These charges allow you to print the tickets out yourself.) and a few more bucks for dunno what shitty stuff and sales tax, so we ended up having to pay $40 each. 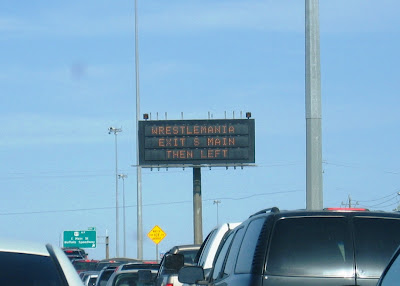 Left early, at 4pm to catch the show which is supposed to start at 5:30pm. See the loooong traffic, and yea, figured most of them are heading to the same place lol. 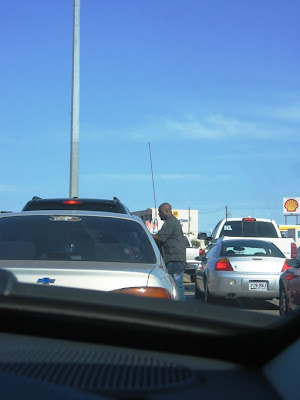 And this fella here is making the traffic worse by stopping at each car to sell Wrestlemania T-shirts. 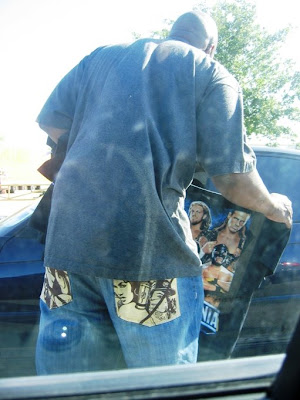 Some more the shirts don't look too nice also. And looks like China made type.


We made good time and reached the stadium (Reliant). Got 2 floors up (yea, we are that far away from the stage, but we didn't realise the extent of it yet). But when we reached our area, we were stopped by one of the working officers there. He said that we need to find the Customer Services because our seating area has been closed.

That time was already 5:25 or something like that. We didn't want to miss the start of the show and plus, the customer relations officers also not very helpful! First she stared around not doing anything although we were standing right at the front of the counter. Then later on after we enquired, she said that the person in charge of the seating replacement is not around so they cannot do anything about it! In the background we can already hear music and screaming that the show has already begun...

Bo chap lor, we just went in but we had to stand somewhere and watch. Better than to miss the matches right, after paying $50! (the additional $10 from parking). The crowd was massive! Everyone was screaming around and the number is definitely more than the ones that went to the rodeo lol! 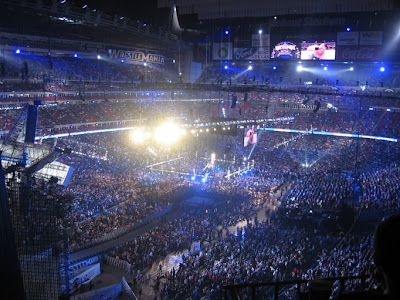 Just look at our seating position! We were seated somewhere at the back of the stage, that wouldn't have been too bad, except that the damn stage backdrop is so damn tall and wide! Nearly completely blocking our view... 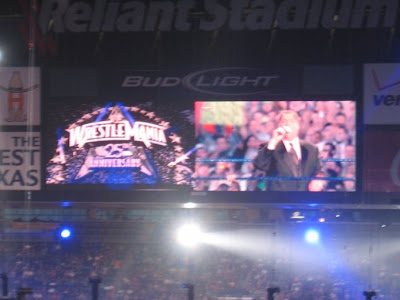 And another sad fact, my camera does not capture zoomed pictures properly... sigh...


The first match started and a bunch of unknown (to me) wrestlers marched out to the ring. 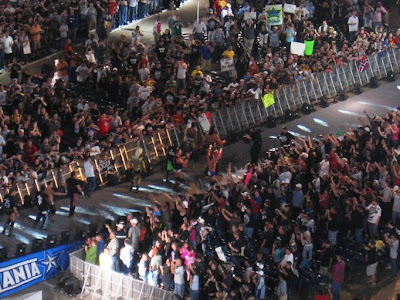 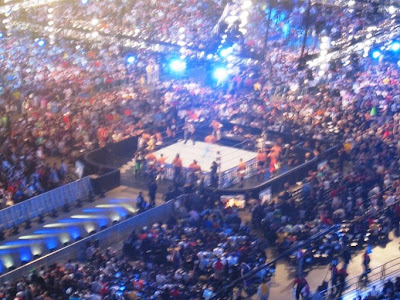 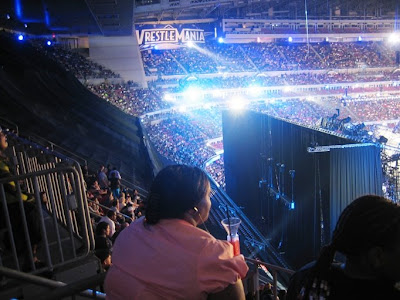 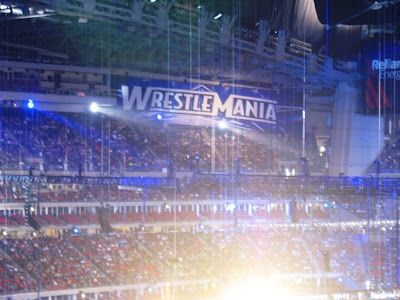 Countdown to the official start. 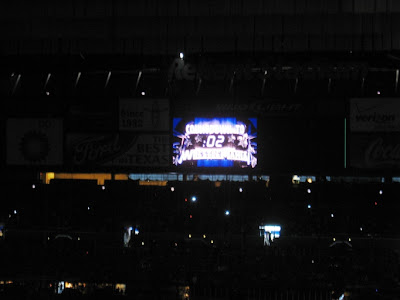 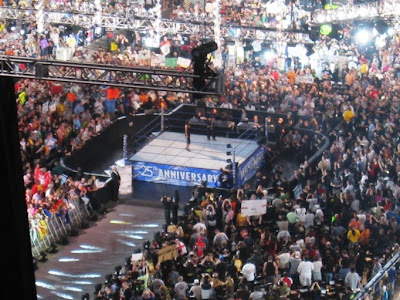 Anyway, got to watch Nicole Scherzinger from Pussycat Dolls perform the opening. There wasn't any booty-shaking and she only performed some American song lol. Sorry la, not very attentive cos was searching for other available seats to change to. 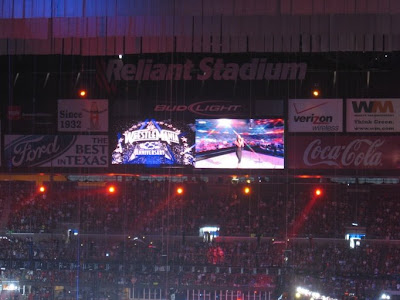 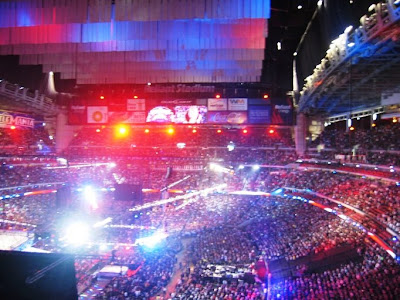 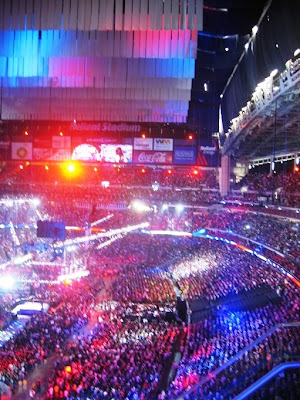 Now, it has been common knowledge that wrestling matches are fake lol, and they do indeed look fake when I watch them on tv. But surprisingly, when you are watching them fighting on stage, it kinda looked real and occasionally you can hear the falls and broken props all the way to where I was seated. 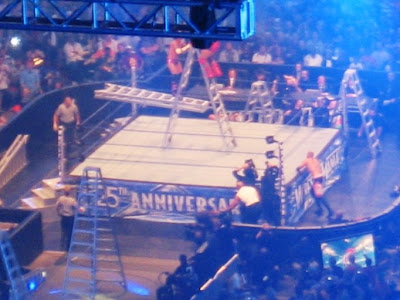 Sure need ladders in a Wrestlemania, otherwise it ain't a WWE. Can you recognise this person's face on the screen? Apologies for the blurred photos :p 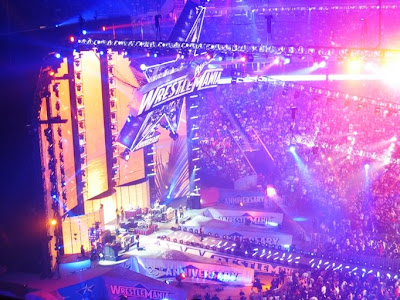 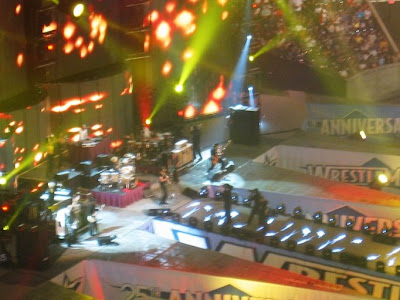 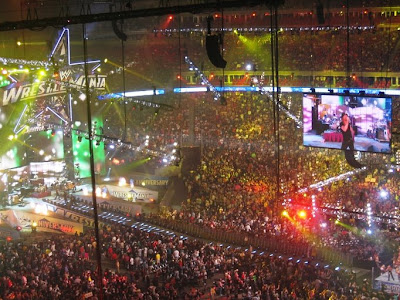 Notice that the angle has already changed? Hahahah, I persuaded Irwin to move to another side of the stadium where we can actually see the front stage, at the very least. I don't want to have to look at the stage backside for the whole night. 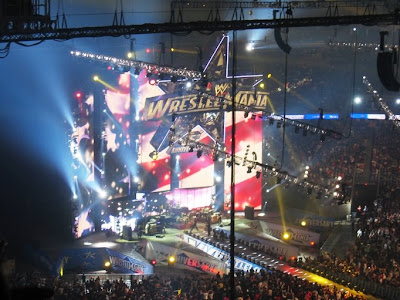 Well, we obviously do not have seats so we had to stand for the entire course of the show, but I didn't mind! Rather stand than not knowing that's going on in the show. Also, apparently we were standing close to the $100 seats. So it is sort of a good deal that we only paid half the price lol. 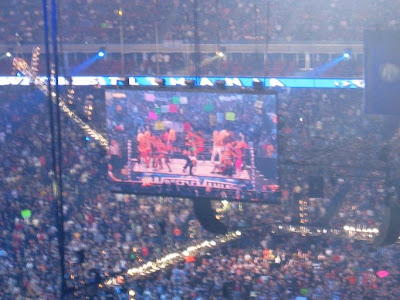 That's the bunch of girls match fighting for the title of Miss Wrestlemania. It wouldn't have been WWE if there isn't at least a girly cat fight match. 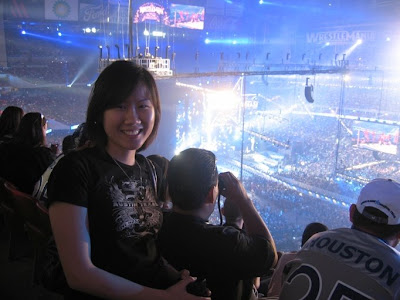 Of course I didn't watch that part of the show, normally it's really dumb and some of the girls look like King Kong with huge boobs. But surprise, surprise, guess who won the match? 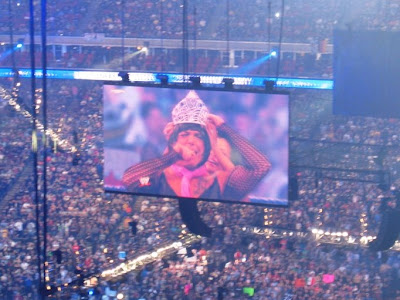 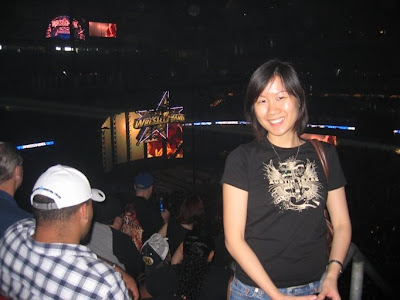 5-men match where the winner is whoever that reaches the suitcase first hung on top in the middle of the ring. 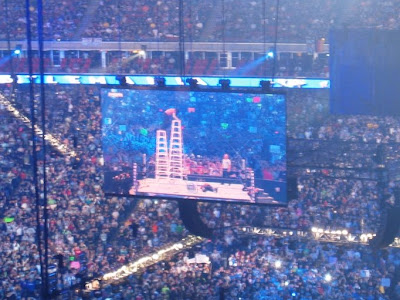 One of the wrestler's move. he climbed to the shorter ladder and then jumped over the higher ladder to land on top of his opponent you can see lying in the stage. Well... the plan didn't work out very well cos the guy lying down on the stage rolled over just in time and the flying guy landed smack to the stage. 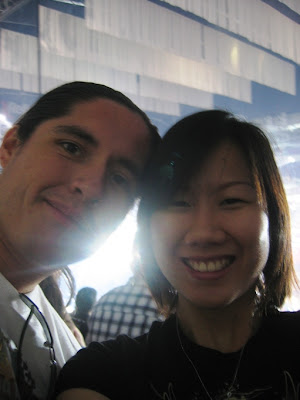 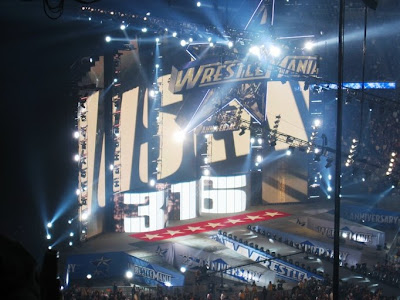 Stone Cold Steve Austin. He didn't fight in this series, he was selected as one of the top 5 hall of fame. So he just got onto a motorcar and drove around the ring, got beer from the audience, threw and splash them around the ring and on to the commentators. Yea.

Lineup of the matches:

Admittedly, I have not been closely following the WWE matches anymore and a lot of names that appeared in the match I have never heard of. I think it has been 3 years since I watched the last match? Lol. I started watching cos Dad likes watching those shows hahaha. 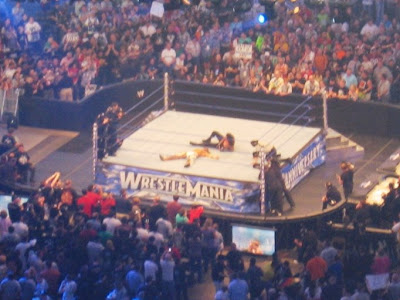 I was completely bewildered as to why the show does not set an age limit allowed to enter and watch the show. Kids as young as 3 and even babies are happily shouting along. And the Americans are a crazy bunch of people! They happily screamed for the wrestlers to break their opponents' legs, kill them, etc. And these people also includes dads with their children!

One other observation... Americans are very supportive of all these merchandise on sale for every single event held. They are always dressed for every event, in this case, 80% of these people are wearing the WWE T-shirts, not just any shirt, but the 25th anniversary one. Damn easy to make money from all these merchandises lor. 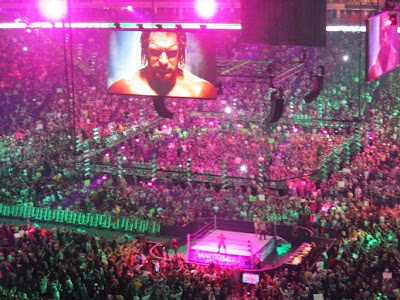 Triple H. I took a couple of videos which I obviously malas to upload them. Anyway it is interesting to watch the show live, close up on the screen and then them physically in the ring.

Definitely fun and interesting as the audience all collectively screamed, cheered for their favourite wrestler, which is usually common.

I have finally presented my technical stuff today, everything went pretty well and I am very very tired as of now... But will need to start packing my stuff cos I am catching a flight to LA tomorrow night! Disneyland, Universal Studios, Venice Beach, Camarillo Factory Outlet, Hollywood, Beverly Hills, (wah freaking long list), here I come!