Left London to Cardiff by coach via the Victoria Coach station, which is only supposed to be 5 minutes walk but as I was not familiar with the route, I ended making a longer detour towards it, with luggage on tow. So, er, it took me 10 minutes to arrive in style!

It takes about 2.5 hours to reach Cardiff and again, I was seated close to some weird, freaky people (as per usual). This particular female, travelling with a friend, was on the phone 80% of the journey. It wouldn't have bother me so much but 1) I was seated right in front of her (hence the sound projection received is full blast), and 2) she has apparently cranked up the volume too. What's even more annoying is she couldn't hear the voice in the phone properly and she thought it logical to raise her voice too... 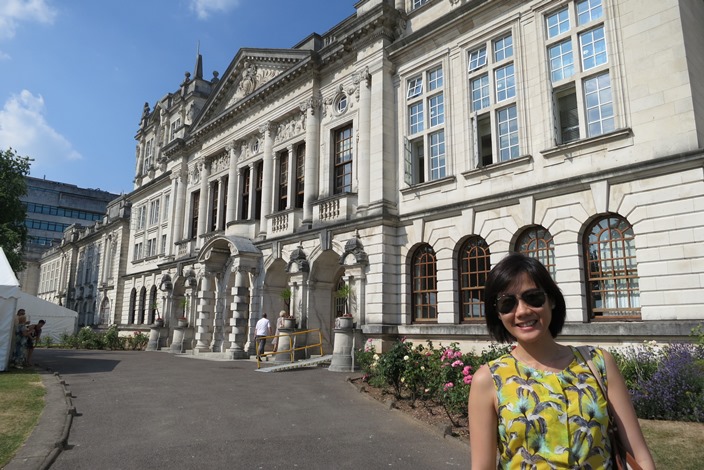 Arrived in one piece (albeit an annoyed piece) in front of Cardiff University where I am soon reunited with another old friend. Soon Wen!

He brought me to lunch at a Chinese restaurant. There's just something about Chinese food that is heart-warming and filling. Had dim sum too but no pics of it. Now, remember I said that I brought the sun? Well, it's still very much evident even in Cardiff. I was practically sweating when Soon Wen was showing me around the University. 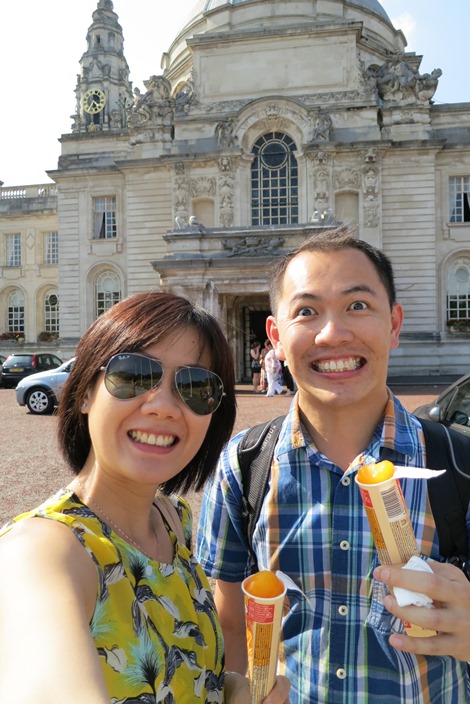 
We initially have got no plans for the day. Well, we had (to visit Bath and Stonehenge), but Caren missed her bus and we thought we will do something else. Soon Wen suggested to visit Stonehenge the next day; leave early, drive south to Stonehenge and then north towards Manchester to collect Caren and then drive to Lake District. All that will total up to about 8-9 hours minimum of drive in a single day and I wasn't looking forward to such a long drive, even though it won't be me behind the wheel. So we decided that we will do Stonehenge today, and leave the rest to the next. 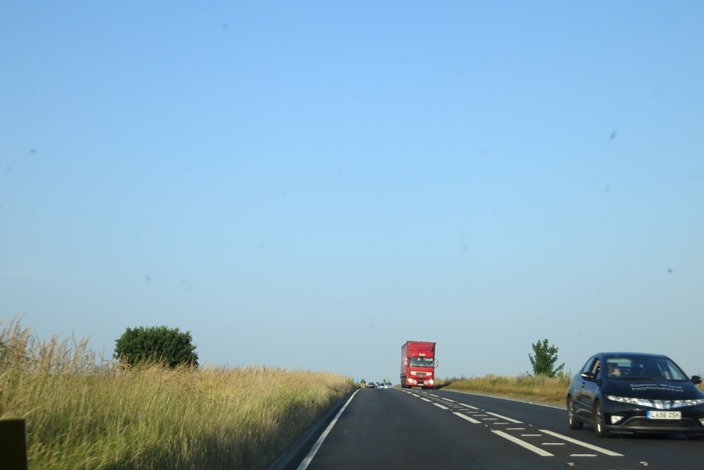 We got around with a rented car; which is only about £22 a day (I think). It was a Ford Focus and my, have we got problems with it! First, the reverse gear is on the top left corner, which is different from the usual default we have back home; bottom right corner. After multiple tries and a phone call, we found out that you have to tug the gear up before switching. :/

Then the next day before leaving for Lake District, we drove into the petrol station for fuel. Soon Wen went out to sort it all and few minutes later he came back in and told me that the fuel pump refuses to go into the gauge!

So I went out to take a look (as if I was any better :P) and true enough, no matter how hard we try, we couldn't get the pump in. The gauge was sealed tightly! We rummaged through the glove compartment and got the manual out (by this time there is already another car waiting in line behind us). But nothing in the manual seems to help.

I waved at the lady in the car behind us to get to the fuel pump in front of us but she signalled no, she will wait. After several more attempts, the lady behind us eventually lost her patience and honked at us (even after we'd asked her to move forward! We concluded that her driving skills must be really dismal that she couldn't manoeuvre between cars to move to the front).

So, long story short, we pulled out and called the rental company. Found out that we can only use diesel to fuel the car. The Focus has a smart function that detects the type of fuel pump and will only allow a diesel pump to pass through the gauge. I guess this is one of the instances where you can say it's a blessing in disguise. Imagine if we'd pumped petrol in! It would have been disastrous.

Ok, back to the drive towards Stonehenge. It was a little bit tricky to get there. Took us over two hours drive to reach! 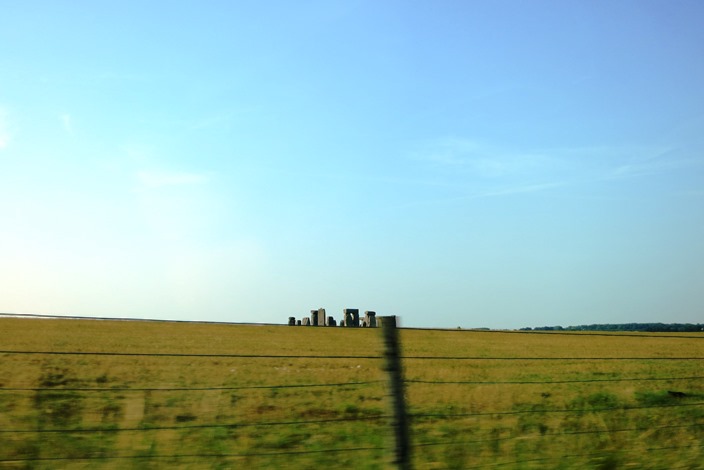 Finally a glimpse of Stonehenge! Super excited by then. 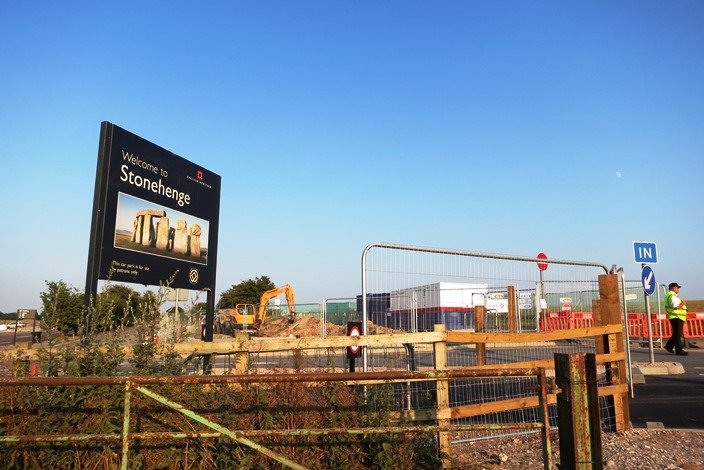 I may have brought the sun, which lasts beyond 10pm. But it has not changed the British attractions opening hours. We arrived at 7:30pm and as we approached the entrance, the guard informed us that it's closed. I initially thought he was kidding, he had a small smile in the corner of his lips. What a sadist! But the truth is, Stonehenge really did close at 7:00pm. (it's in the middle of an open field, for God's sakes!!). Only 30 minutes late, but it didn't matter! :(

What was even worse, the guard refuses to let us into the car park (which is nearer to the Stonehenge without really going too close) and so we had to cross this field and peek through not one, but two fences that blocked our clear view of Stonehenge. 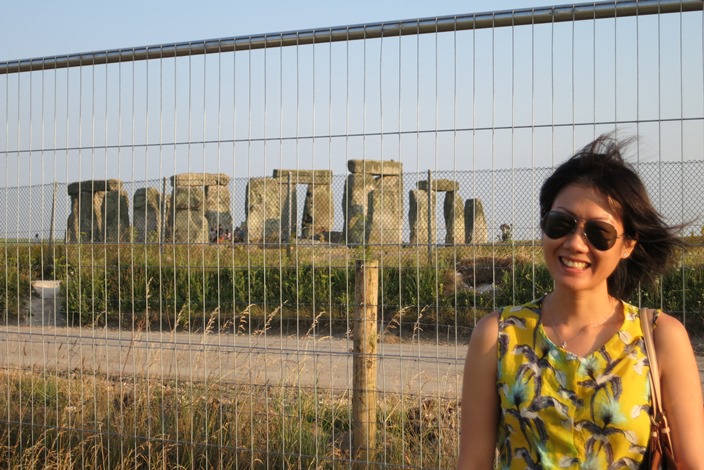 I mean, I still got to see it, just that there is these two annoying barriers in between and it does look like a really sad picture :( 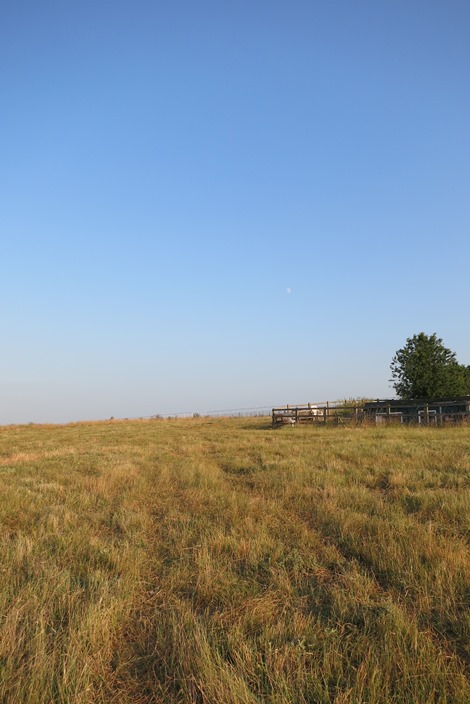 And don't be misguided by the seemingly breathtaking views of the fields just by Stonehenge.... Me and Soon Wen were on our toes looking for a clear line of path... from sheep dung! Smells bad and they are all over the place ; ( 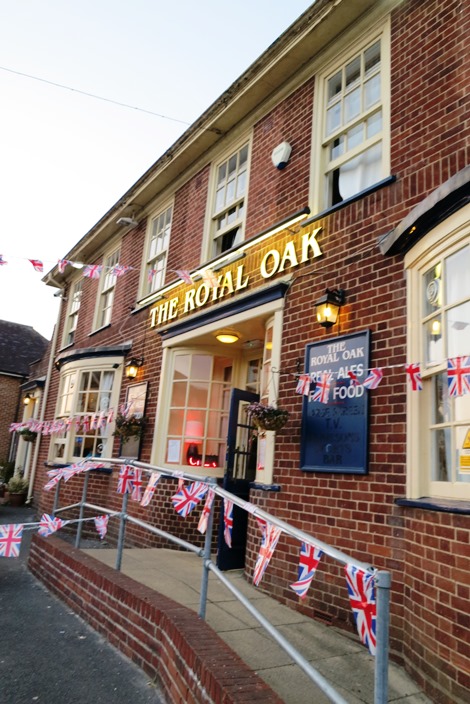 After the not-too-enthusiastic tour of the Stonehenge, we drove around a nearby town called Salisbury trying to look for a meal.

Found this place and decided to go for it (there wasn't much choice in the small town, pizza, chinese takeaway and that's about it). It was kind of a dodgy place, with a few green tables in the middle and a bunch of guys playing poker around them... 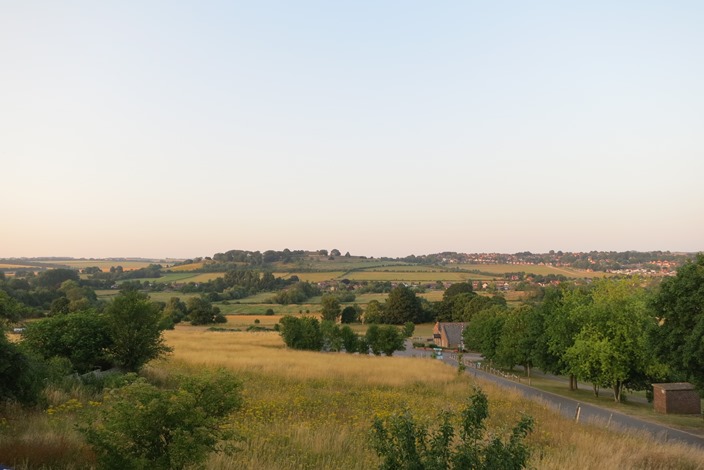 Still, at the balcony we get a lovely view of the dusk skies while enjoying our meal. Getting chilly too. 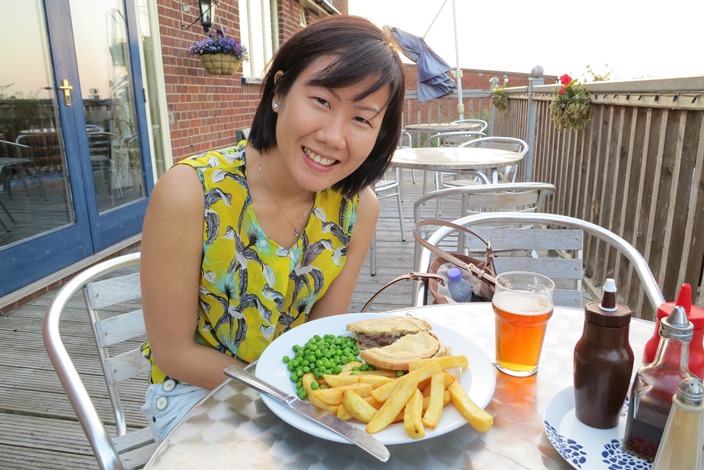 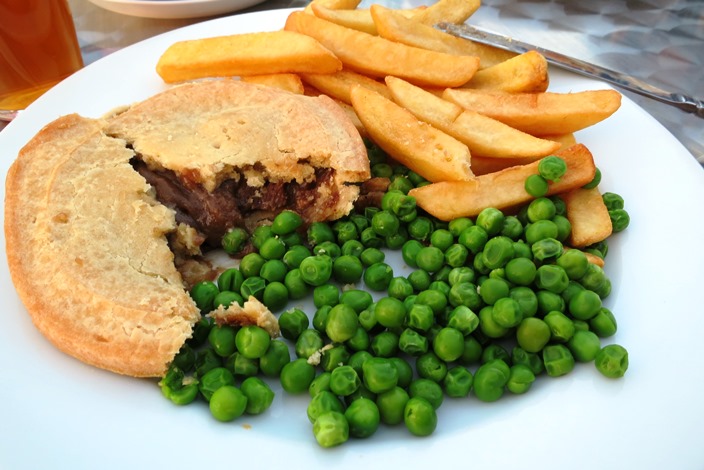 Guinness steak pie with peas and chips. First of it's kind that I've ever had. It tastes very homely, best meal I've had.... since London. Green beans, not from a can, helps too.

Next morning drove over 3 hours to Manchester to pick up Caren.... To begin our next adventure! Lake District! I really liked Lake District and have thus decided that it shall have its own post. 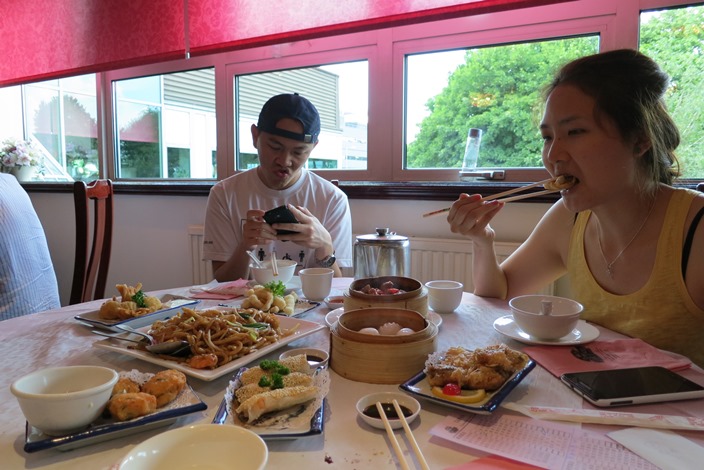 So fast forward, after picking up Caren and having one of the best dim sum meals I've ever had (XO udon was superb: tastes a little like char koay teow; the fried stuff shrimp roll is also extremely good, dipped in vinegar :D Happy tummy). Anyway, I digress.

(Cue plenty of sampat stories about Soon Wen and Caren)...

On the way back after Lake District, and just the day before I leave for Singapore, we detoured and spent the night at Caren's place in Manchester. And where else do you head to when you're in Manchester..... 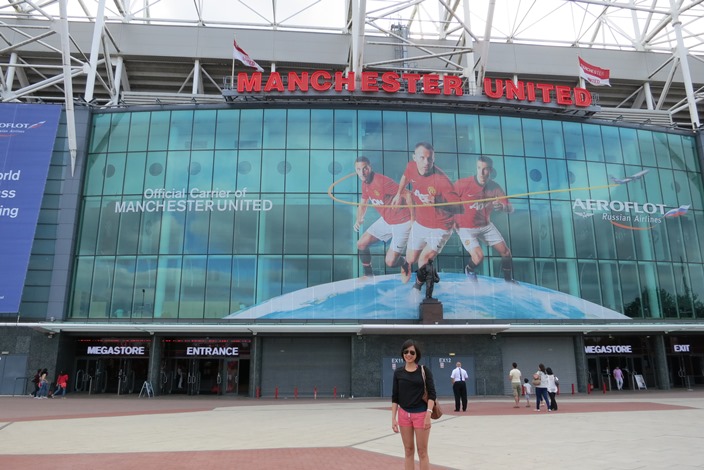 I felt like a complete hypocrite, standing there and posing in front of the Manchester United Old Trafford stadium. Couldn't care less for football but I don't mind making my friends jealous over the fact that I've been there! 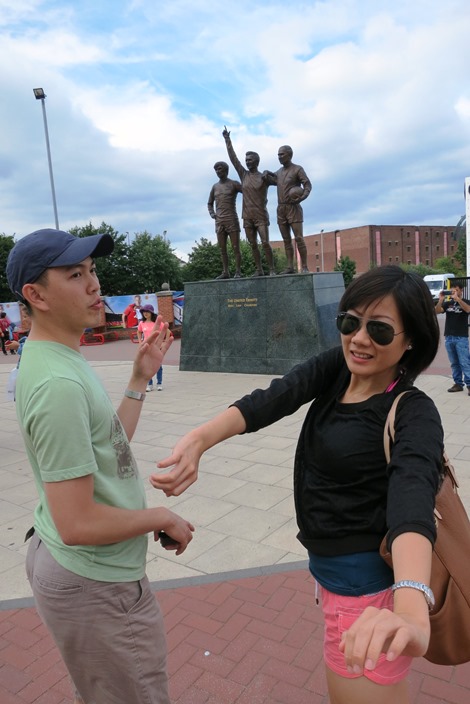 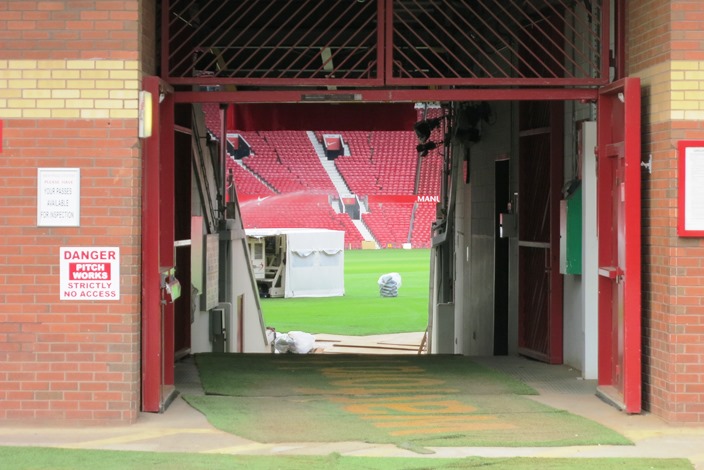 Also, I was supposed to be really 'lucky' to be able to take a peep into the stadium (yawn). 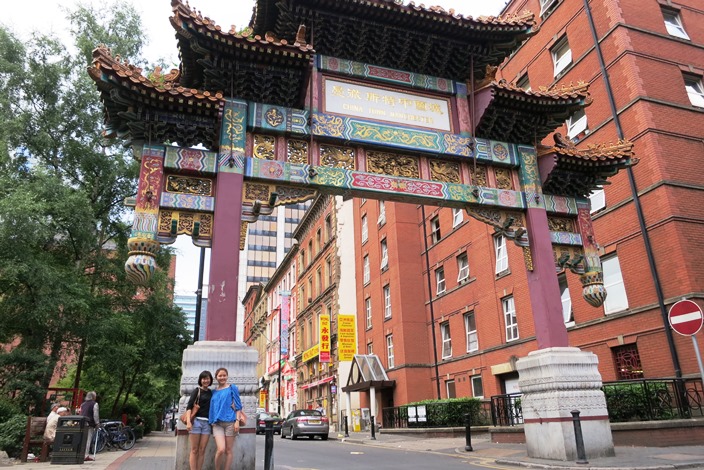 Dinner at Chinatown and picture in front of the famous arches -.- 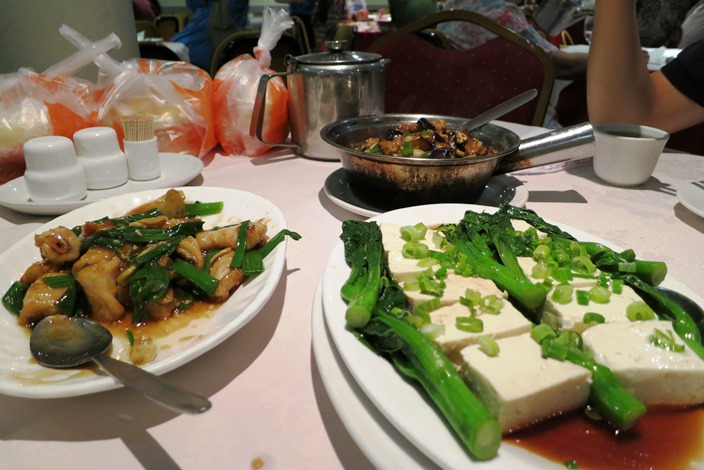 Those little bags at the back of the dishes are confectioneries we got from this bakery that Caren claims to sell the best breads. 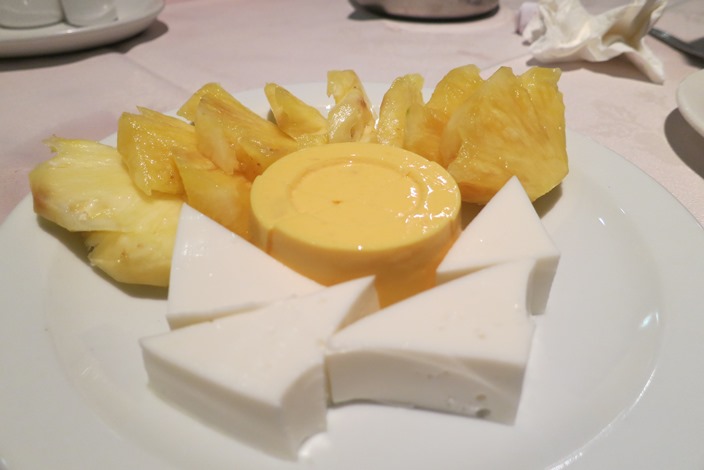 Washed down by dessert - some coconut jelly; pineapple chunks and a type of custard. 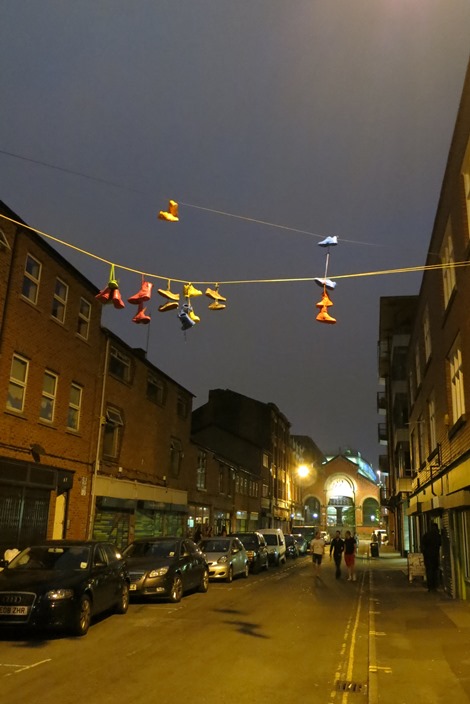 Caren took us around the town; it was a Saturday night and the city is just about coming alive! I love the effort the people took to party around here; there was a guy dressed like a heavy metal rocker, one who was dressed like a superhero... all sorts of costumes and it's not even Halloween! But it was definitely a fun, party vibe and interesting to look. Manchester is also famous for a gay street where we also went, called Canal Street. Take the 'C' away and that's what the core is all about ;)
Posted by Su Yin at August 11, 2013
Email ThisBlogThis!Share to TwitterShare to FacebookShare to Pinterest
Labels: Around the world - Europe, Food-Angmoh Chiak, Food-Oriental Oozes
Location: Stonehenge, A344, Amesbury, Wiltshire SP4 7DE, UK