A Stroke of Yangonese Gold

Goodness me, what a month it has been! Back one day on a flight then out on another flight the next day. But been busy in a good way, I must say. 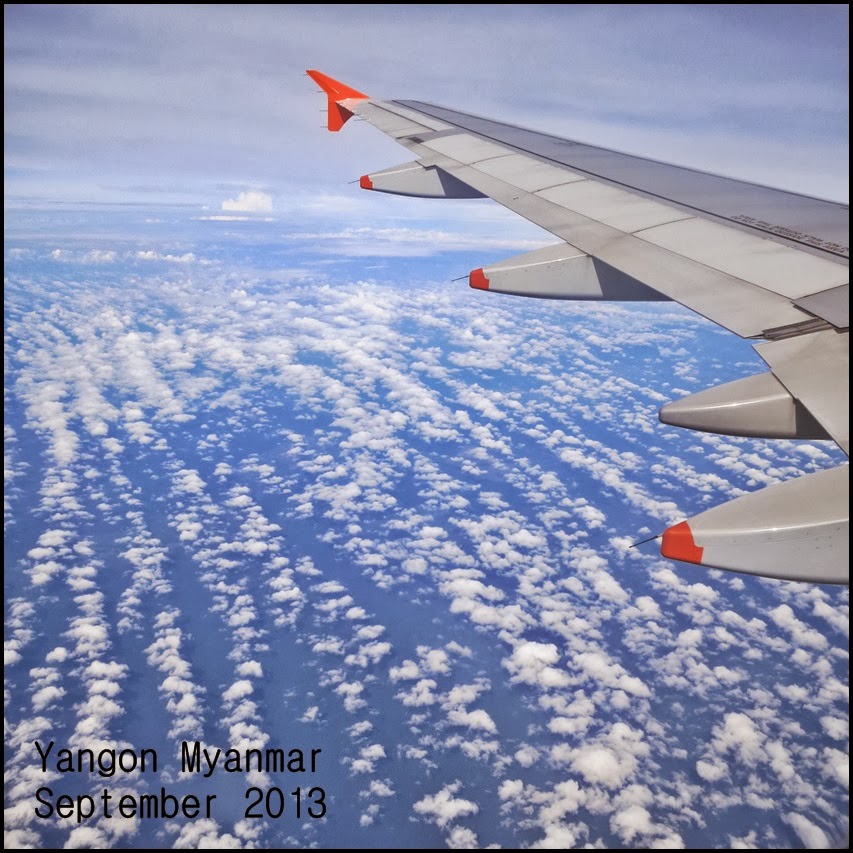 This trip was only planned a week before it actually happened. A friend was working in the city and I decided to visit. Got an early flight in and arrived at the airport just before noon. Around here, things work with Myanmar Kyat (pronounced Chyat) or in USD. Now, if you decide to pay in US Dollars, things get a little bit more complicated. Well, kind of. You just need to make sure that the USD notes you bring are new; without any fold marks, scribbles, or any form of defacement. The Burmese will reject your money if they do not like the condition of the notes. Which can be quite a pain if you need to get somewhere in a jiffy.

Got into a cab at the airport for almost a 30-minute ride to the Kandawgyi Hotel in town (only USD10!). Nice cabbie tried talking to me, explaining how to get to some of the temples from my hotel. He also taught me some words in Burmese (complicated words!!), his English wasn't very good but it's nice that he tried to be hospitable in his own way


On a side note... Been going mad with the photo editing tool that I just discovered. Love how easy and beautiful pictures look now, exactly how I wanted them to look like. Tell me what you think! 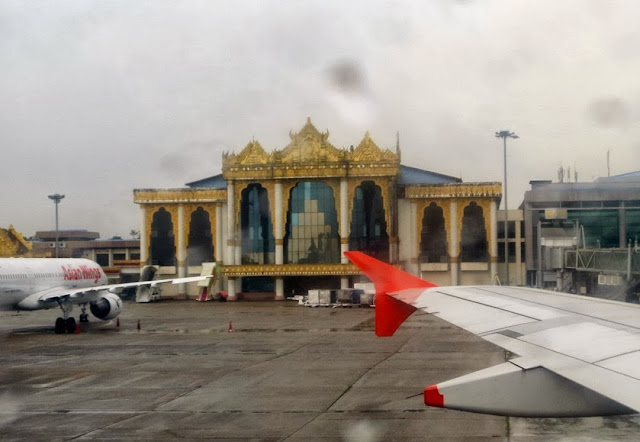 
I was so starved that I put off checking into the room and instead, dragged my luggage to the hotel restaurant straight away. 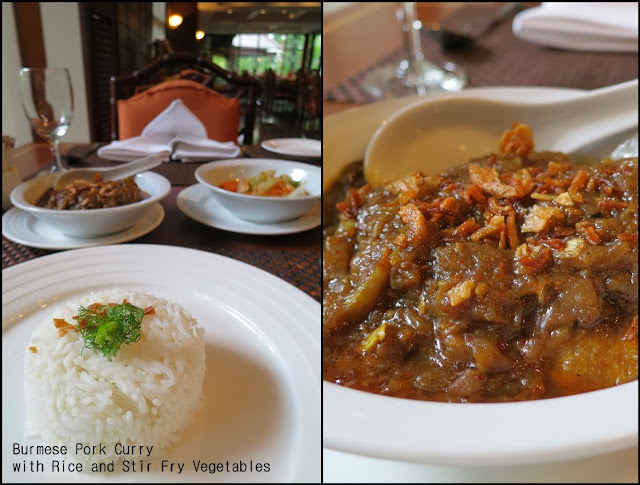 First meal upon touching down on Yangon. Ordered a dish of pork curry with rice and some vegetables of carrots, cabbage, celery. Oh. My. God. The curry. was. absolutely. divine!!! It has got to be on my list of one of the best curries I've ever had. I couldn't get enough of it! Tons of fried shallots add a beautiful crunch. Pork wasn't the most tender of meats I've had but the gravy more than makes it up for it. Completely out of this world. Needless to say, I wiped the plates clean.

A quick shower later and I am out within the hour. Not very lucky with the weather as it started drizzling softly. Anyway, first stop to the main Yangon attraction, the Shwedagon Pagoda! 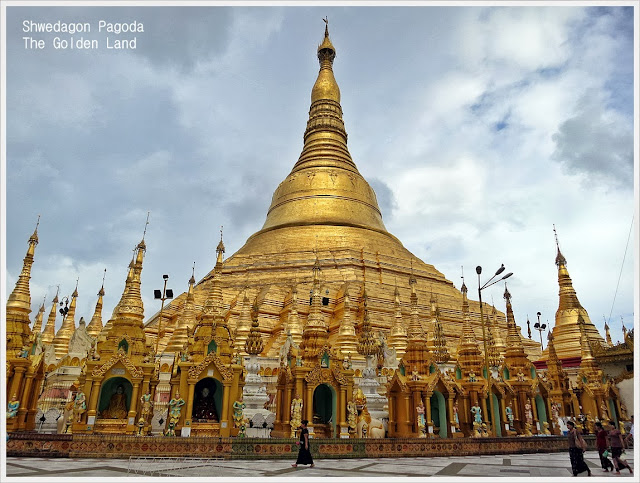 I must admit that I was most impressed and quite taken aback by this beautiful structure at first sight... Even with the overcast skies, the sheen of the gold is not diminished... The very top of the stupa is a wealth of treasure. Gold rings, rubies, jades, emeralds, diamonds adorn the topmost tip. There are a few binoculars placed around the pagoda so you can try and spot them but I couldn't tell! 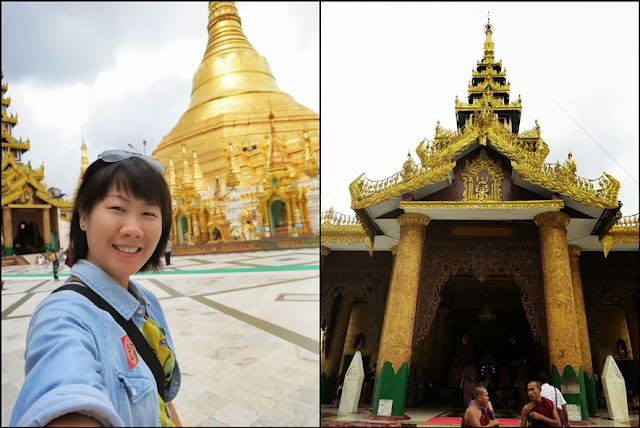 Usual rules comply for entry into the temples, no short shorts and no shoes. But the tiles were really clean and probably washed quite often! 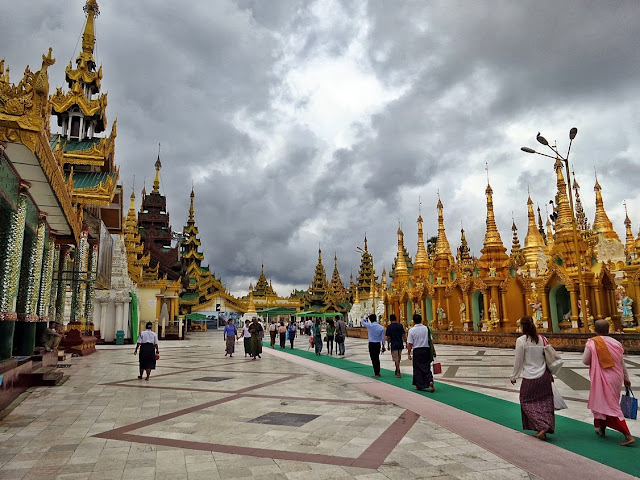 The skies seemed really kacau back then but I like to think they bring out the gold of the stupas nicely. If the sky had been a clear, vivid blue then the gold colours wouldn't stand out as pretty, eh? 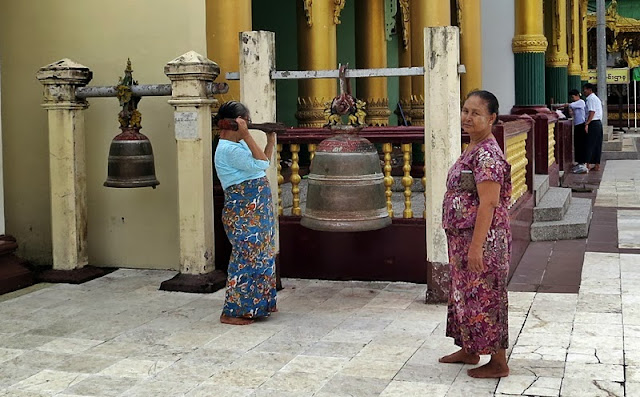 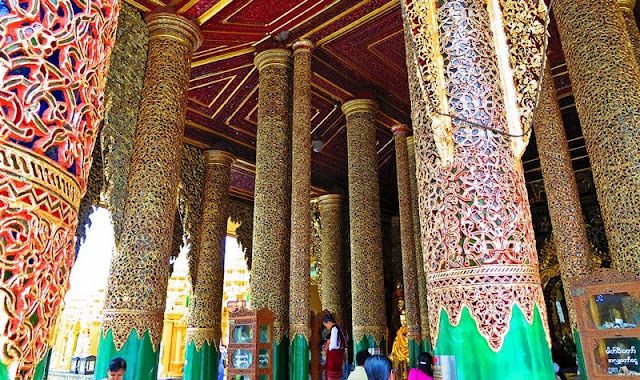 As a friend rightly said, the display of wealth is at odds with the economy and its citizens. Some people barely making a living and all. But I like it that the people here are not pushy about selling their items or services to you. I've been to Vietnam where this is a major headache. They put the pressure on you to purchase their goods and if you say no, they linger on and wait till you break. 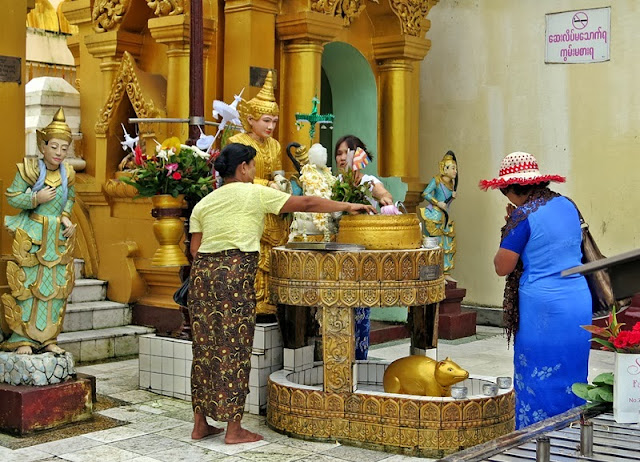 The Burmese believe that the days which we are born determine our fate and horoscopes. I was born on a Friday and thus, that makes me a guinea pig..... As it was also a Friday when I was there, many other 'guinea pigs' are out at the temple praying and making offerings... 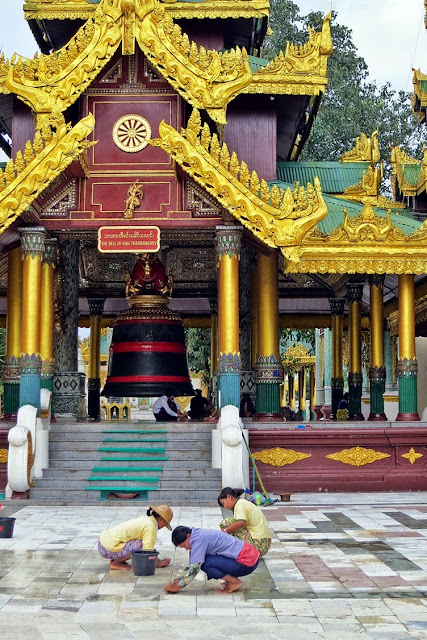 
As I was trying to get my 100th shot of the main stupa, a dark Burmese tour guide told me to stand at another corner to capture a better image. Then he started going on about the temple and how he used to live in Japan (he speaks fluent Japanese!); married a Japanese; but eventually got a divorce. He (Myo Aung, but can opt to call him Chris) went on lamenting about how local Burmese women are not interested in him any more, as he is a divorcee. I told him to get a girlfriend instead of a wife and he gave me an earful hehehe 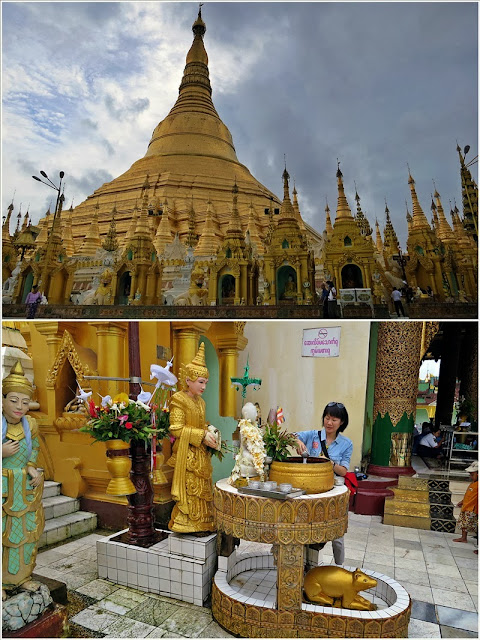 He then dragged me to the guinea pig altar and taught me how to perform a prayer. 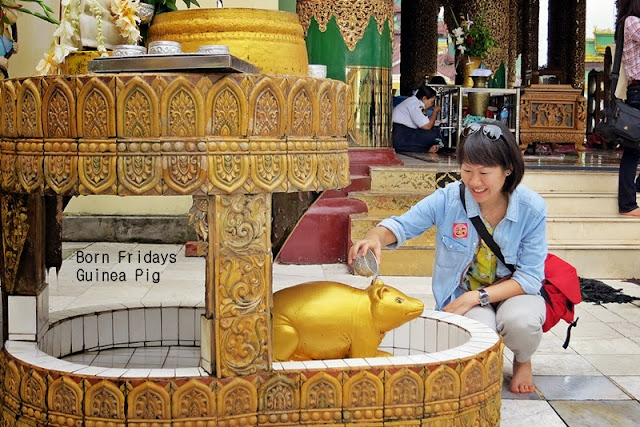 He also told me that female 'guinea pigs' generally have many boyfriends and are quite a player. I vehemently denied all such accusations, lol.

Seen anything interesting in this line of crafted statues? hehehe... I'll give you a hint, balls!!!

This row of little imps are high up on the roof and it obviously wasn't me who spotted them... Chris did! He's the funny tour guide who eventually nicknamed me 'Sweetie' (suka hati give nickname... Such a casanova!). He fed me with all sorts of stories of the temple, Yangon and Burmese in general. A charismatic person to talk to. I casually mentioned to him that I intend to visit the Bogyoke (pronounced Bo-jowk) Aung San market. He was keen to bring me there and managed to persuade me to take a local bus and visit another temple (because he hasn't got any customers at the moment). 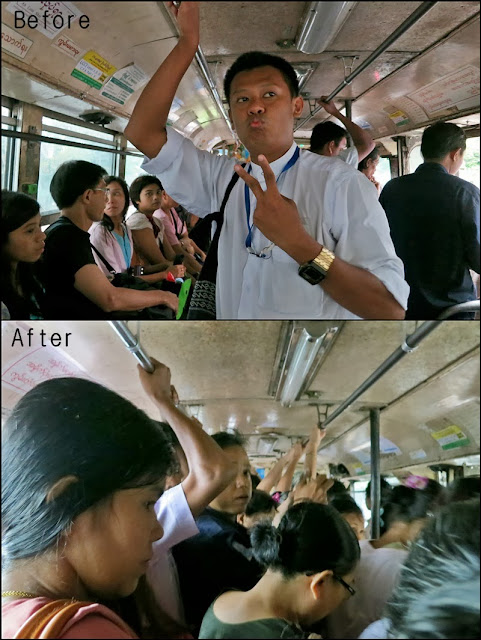 Most Yangonese (quite a mouthful, this) take the bus (a tad obvious from the top picture, I guess) and I was eventually pushed into a corner but managed to get a seat when the previous tenant got out. As I made myself comfortable, more people started inching in until this lady, who was standing right in front of me, had her crotch pushed against my knees! I'm just glad that that part of her is covered and I am furthermore wearing long pants.... Literally too close for comfort! 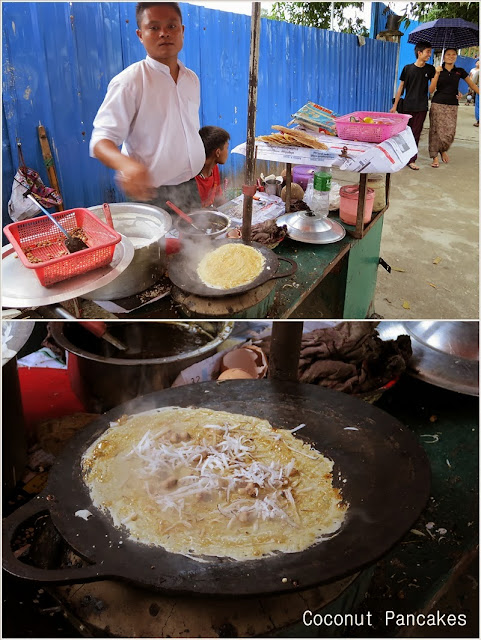 Saw this roadside stall selling pancakes. I was definitely keen to try. 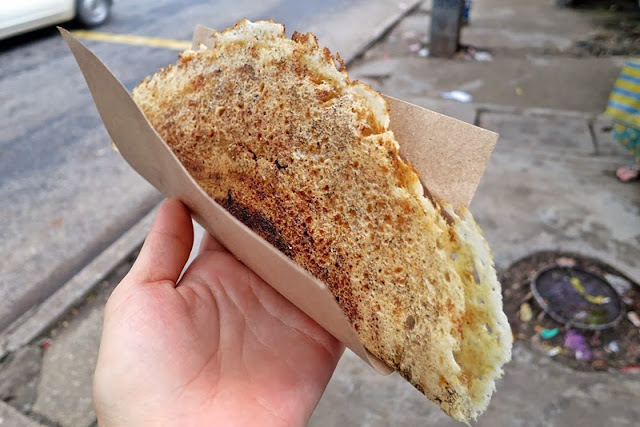 The pancakes were delicious - crispy and sweet. Anyway, shopping time!! I went straight to a jewellery stall to look for a jade bracelet - one caught my fancy but I cannot reveal how much it costs; way too much 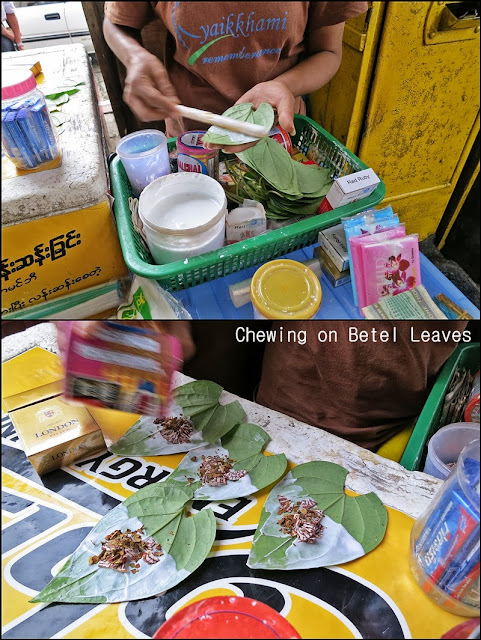 Betel leaves/nut chewing (a quick search revealed that it is the very same as the daun kaduk!) is very common here. It used to be pretty common back home as well. I remember Ah Kong would chew them sometimes, for his nicotine fix. Road stalls are set up like a convenience store where you can get your supply of cigarette, nuts or betel leaves.

The leaves are slathered in limestone juice and some pieces of betel nut (areca nut) are added. The nut is red and gives off a black/red stain, evident among the dark-enameled smiles of the locals here.

After the impulsive shopping, Chris brought me to one of the highest viewing point in Yangon city, a building called Hitachi tower, lol. 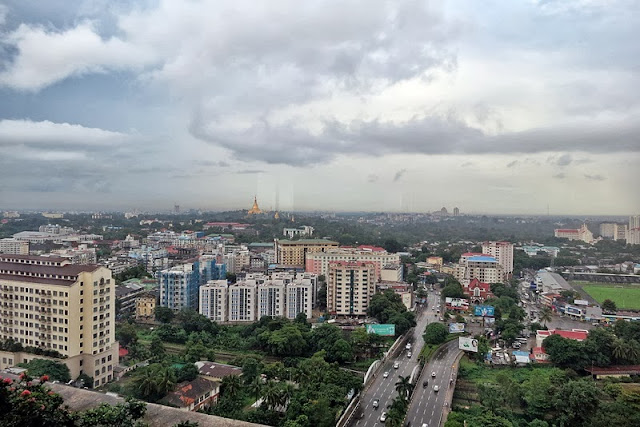 View from top of the tower (inside a cafe). See if you can spot the famous landmark! It's just strange for me that the tallest building is a corporate tower, here in Yangon. 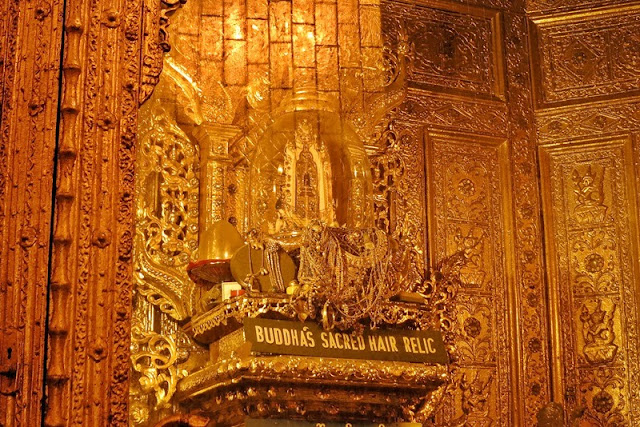 Look closely and you might just be able to spot the single strand of hair from Buddha! This is by far the most luxurious temple I have ever stepped foot into.


Filled with treasures; gold, antiques from thousands of years ago, diamonds, rubies, some notes and coins from the olden days, jaw dropping stuff! 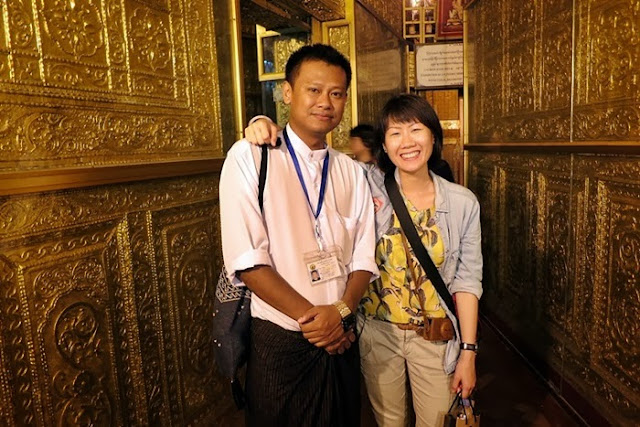 Chris requested I put my arm over his shoulders for this photo. After the lone tourist who was randomly targeted to take this photo handed back my camera, Chris explained the significance of the casually rested hands on shoulders means a satisfied customer. Erm.... okay. 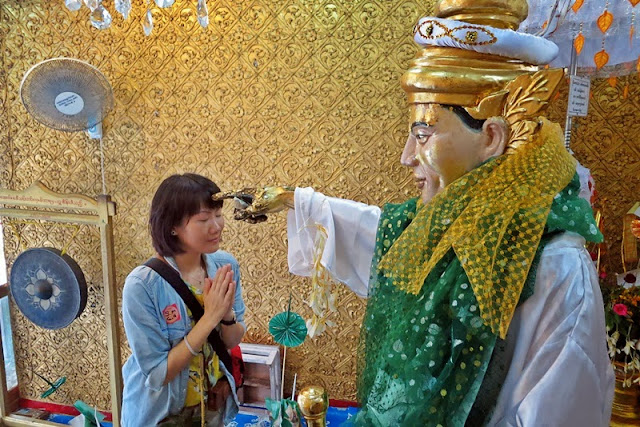 Chris insists that I put my hands together in a prayer and to shove my forehead to the statue's pointing index finger. I felt silly doing it while he took a picture but nevertheless started furiously wishing for a number of things 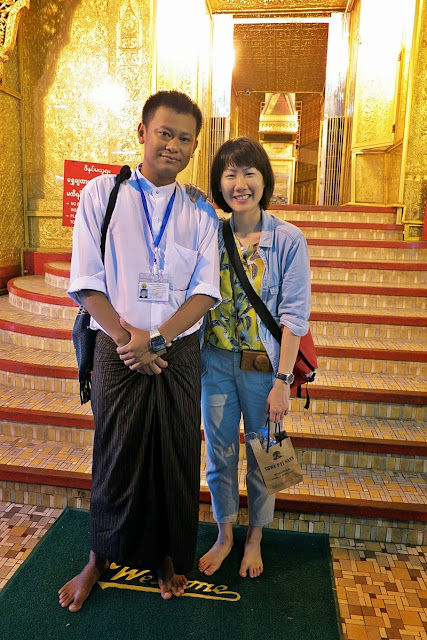 By then, Chris has started confessing his love for me and that I must, must call him by tomorrow hahahaha, what a strategy to pull off on your customers! But if you are ever keen to visit Myanmar, this guy here is the person you want to go to!


Day 2 - Breakfast and walk to the Kandawgyi Park. We realize that there are just too many couples hanging out at the park - even though the weather is less than ideal (small shower); and umbrellas start popping all over while we left it to imagination as to what was going on under the guise of the umbrellas. 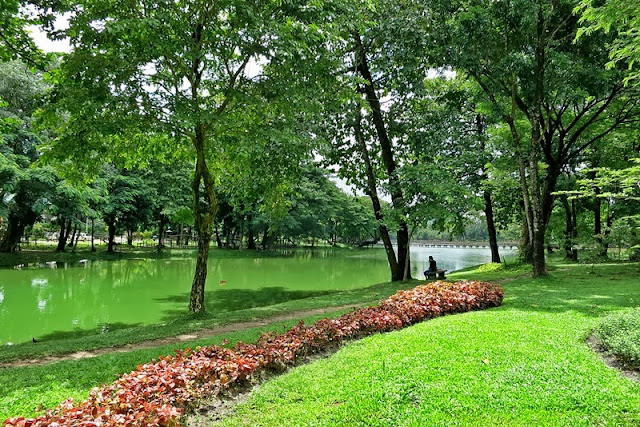 On a hindsight, the park looks really appealing from the photo. But lake is green and gross in reality... :/ 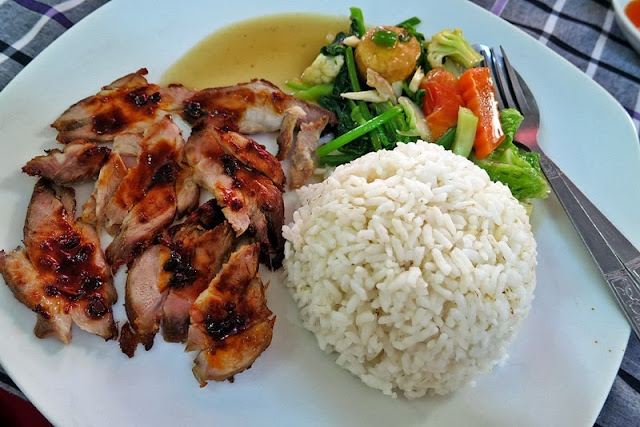 Lunch of roast pork with stir fry vegetables. Roast pork is a bit like our version of char siew - I liked it. 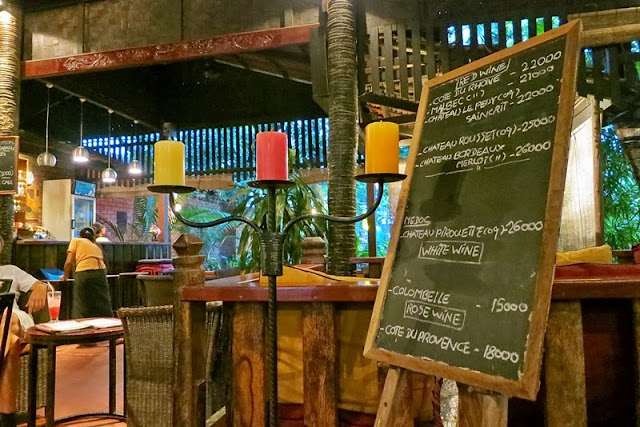 Tea time at this cosy French-influenced place and I ordered some crepes of which I forgotten to take photos of!!! They were absolutely divine - banana with chocolate crepes. 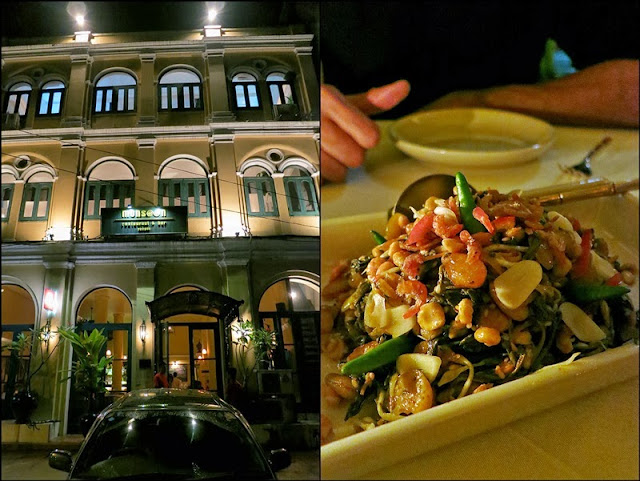 Finally dinner at Monsoon. Vinnie & I were contemplating where to go, and finally settled on Monsoon after having read some good reviews of the place. Ordered a 'Tea Salad' which is something very different - I've never had anything like it before. Made with tea leaves and a combination of peanuts, dried prawns, shallots, (not spicy, despite the daunting green chillis poking out of it- decorative purposes) and some unknown ingredients. It's bitter and slightly sweet. Quite nice but couldn't finish it!


And just like that went my day and a half in Yangon, wish I had more time to explore other places - Old Bagan, Inle Lake and the Mandalay - legendary Myanmar destinations...