Was a less-than-desirable affair. But it could have been worse, I suppose.

Let's start with less depressing, pre-birthday events, shall we?

Went on a biking trip with Justin, rode from KL to Betong, Thailand. I've always wanted to ride a super bike, wanted to get a license, wanted to own one big shiny boys' toy. But never got around to actually do it. So when Justin is finally free to spend a few days to ride, I took a bus up from Singapore to KL. 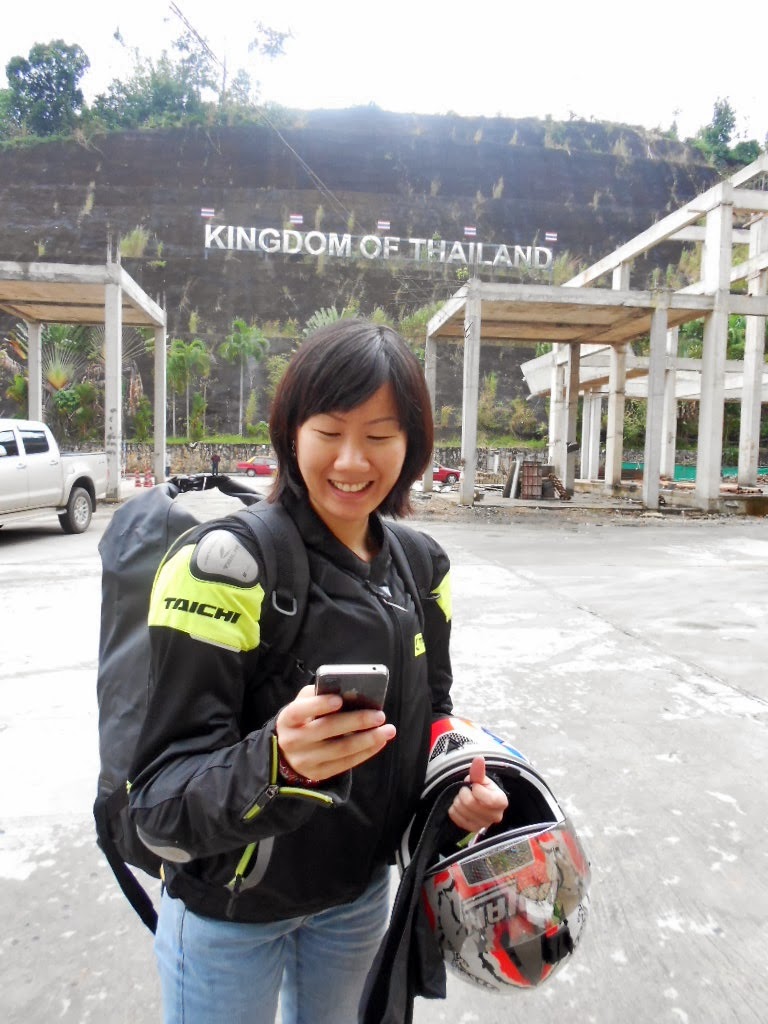 The bike is really stable, even at a speed of 100km/h. However, once we get beyond that speed, at 120-140km/h, I had to strain my neck to keep my head forwards because of the force from the acceleration and speed - that gave me a sore neck for a couple of days afterwards. But so much fun!

Pushed the speedometer all the way to 230, whoosh! 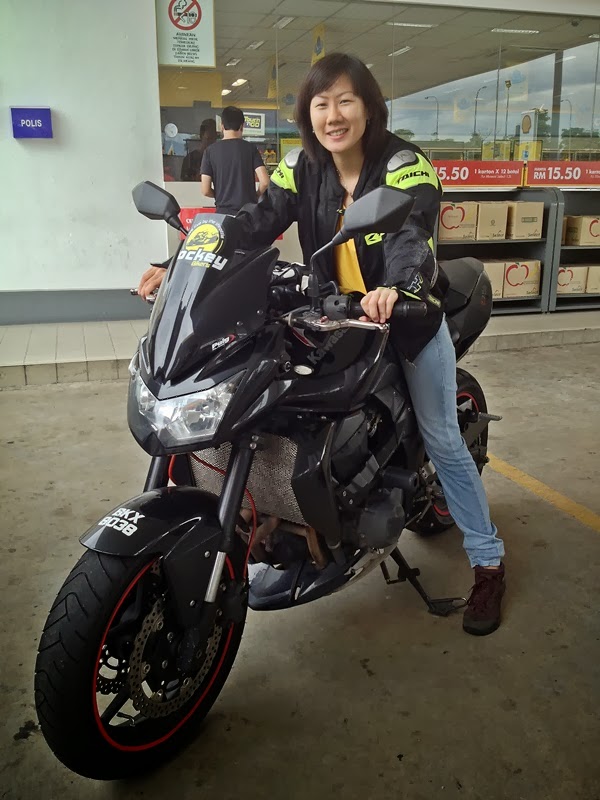 Justin got hold of the Kawasaki Z750, what a beauty! I love, love, love the roar of the engine when it's brought to life. It's massive too! But hey, at least my feet touches the ground :) 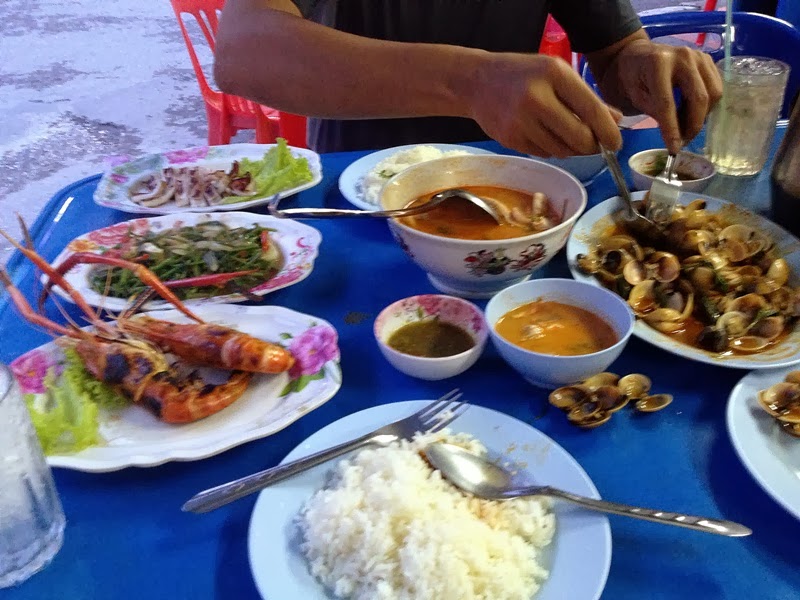 Omg omg omg our dinnerin Thailand!! I only had some oat biscuits in the morning (expecting Justin to arrive 10ish) but he only came at 1pm because the bike was undergoing some maintenance (don't want to rush that one). Along the way I may have had a chocolate bar or two but I was STARVING by the time we got to Betong. I refused to have anything other than authentic Thai food so we let ourselves loose.

Clockwise from top - Seafood tomyum (good, but I've had better); spicy, sour lala (now I'm not a huge lala fan but omfg this is awesome! I was less than enthusiastic when Justin ordered these, but I think I ended up gobbling most of it

The hunger strike is more than worth it! Sigh. If I imagine hard enough, I can almost taste it...... 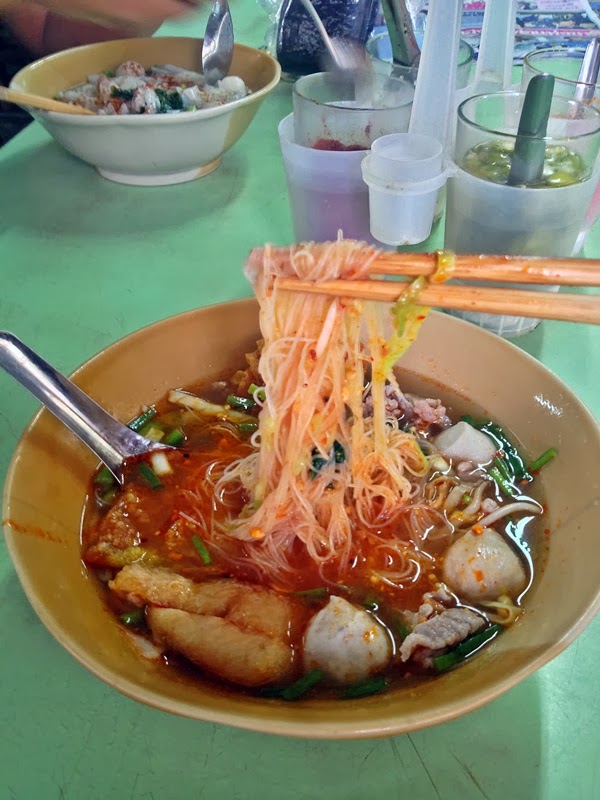 It appears as though any random stalls sitting innocently in a shop still makes better tomyum than the ones you find in Singapore. This tomyum beehoon is delicious, spicy and full of flavour. Best eaten on a rainy day :) Oh, we got really crap weather while we were there - it rained all day and we had to call the masseuse to drop in to our rooms for a massage. It was a tough and testing period. 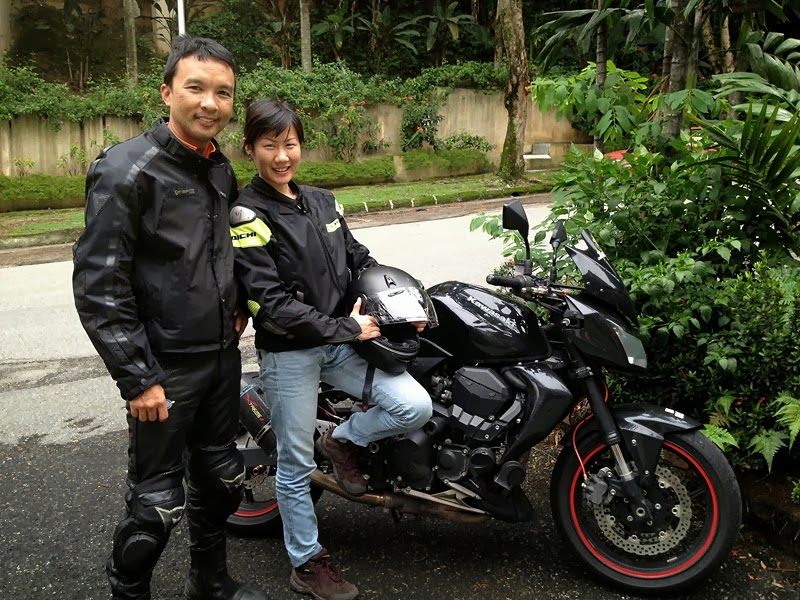 Justin taught me to pose this way -.-


Back in Singapore, MCC & IKK wanted to treat me to a birthday dinner, and asked what I'd like to have. Good old chu char I say! Haven't been to the South Village one for a while and needed my salted egg yolk pork ribs fix. 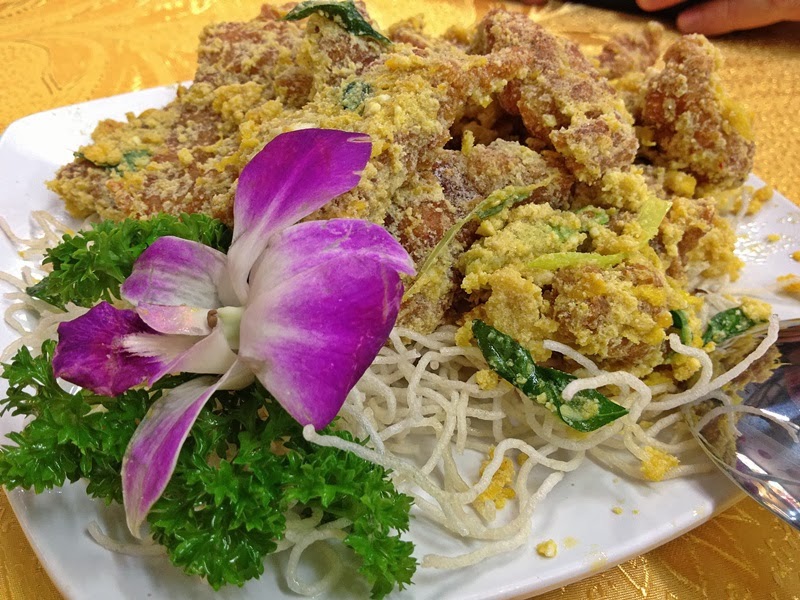 There's no other restaurant who can make a salted egg pork ribs the way South Village does.  Crispy batter on the outside and oozing on the inside. Awesomeness. 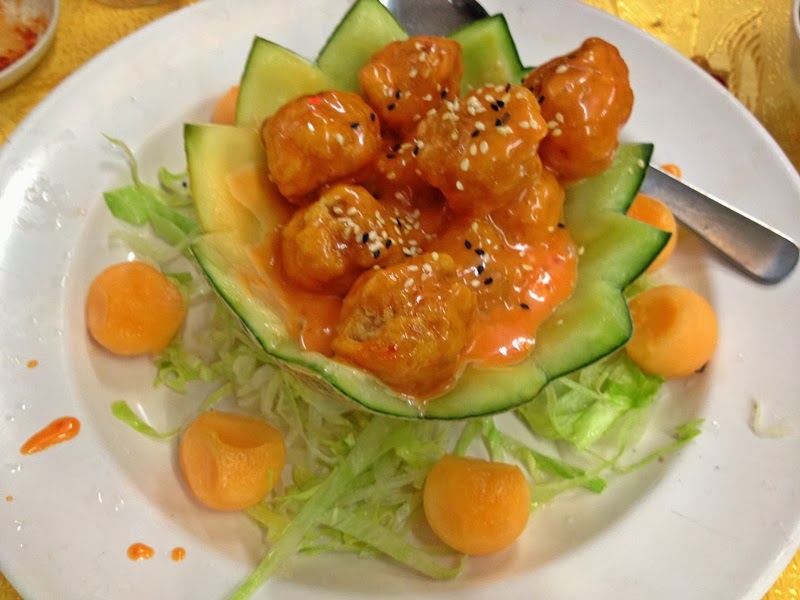 And of course, the honeydew prawn balls. Bliss.


We ordered some 4-5 dishes amongst the three of us (tofu, dried chilli frog meat, veg). Needless to say, we were stuffed.... But there's always room for dessert, right? 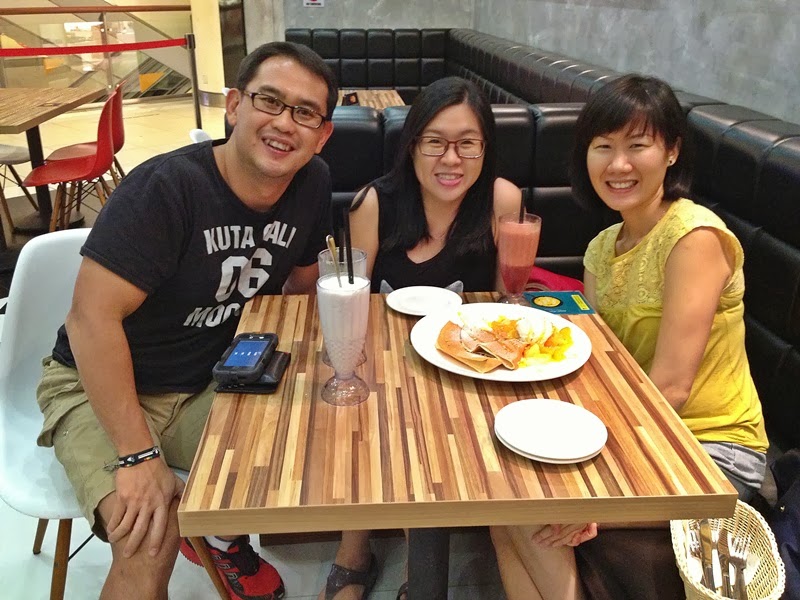 We were craving for ice-cream and wanted to go to Udders at Upper Thomson but IKK said parking will be a pain, so we settled for the mall opposite Mustafa (which I can't recall the name now). Got into Swensen's then decided that the choices are limited and also it was too cold in the restaurant -.-

And thus, we walked out without shame, and went into the Paddington House of Pancakes. It was my first visit there; I've just never been particularly attracted to a place that only serves pancakes but hey, there's ice-cream! 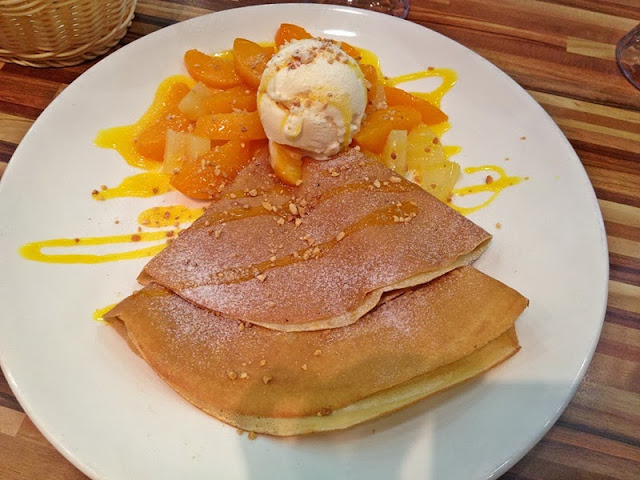 Um, in substitute of a birthday cake, perhaps? Crepes were delicious, btw. But the crepes I get onboard is much, much better (typing this after I've had a few of them, yum yum).

Japanese lunch buffet with Su En day after at Kiseki, Orchard Central. Yes, my life on land seems to be filled with me stuffing my face, I know. So it's completely justifiable. To satisfy all cravings and eat as much fresh food as I can. I sure as hell had plenty of fresh food.... loaded up on the salmon sashimi, plate after plate. I am content. With the sister, so many people say we look alike. I think I look better :D 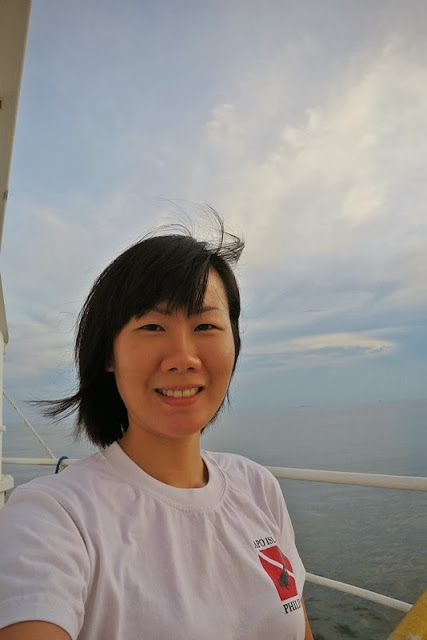 You poor thing, you.... at least it was a really nice and calm day out at sea. 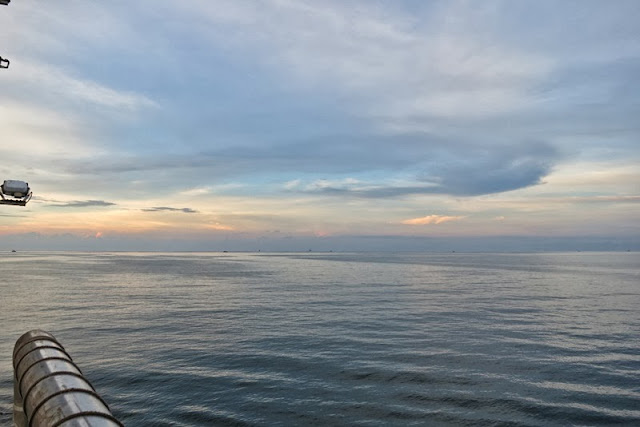 There you go, my birthday cake. Amongst a pile of chocolate cake.


The pastry chef *forgot* to make one for me. Also, we have run out of cream cheese so not even baked lemon cheese cake for me!

I don't want to live in this world any more...

While we're at it.... Christmas onboard: 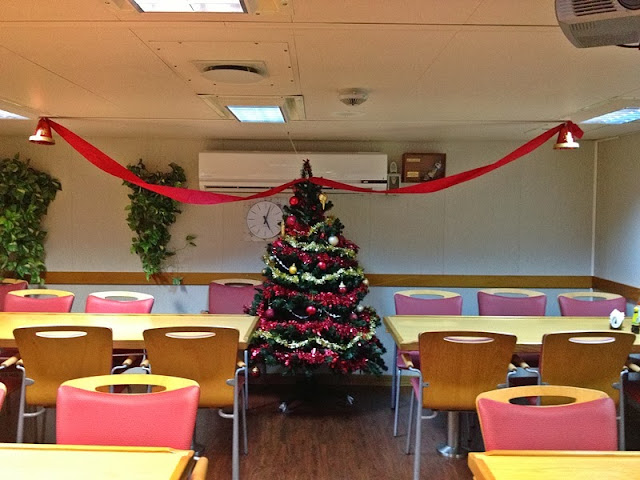 The galley cooks overdid themselves this time... 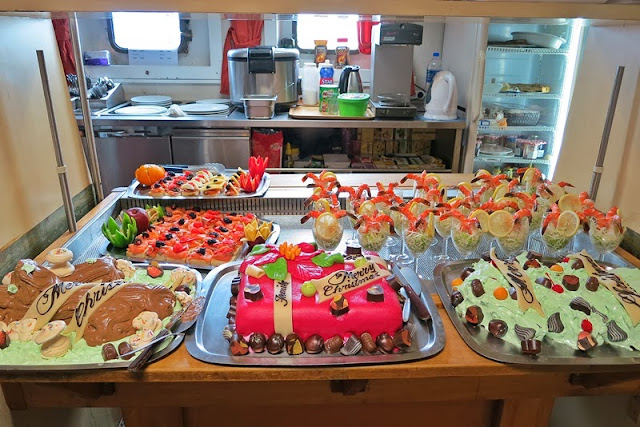 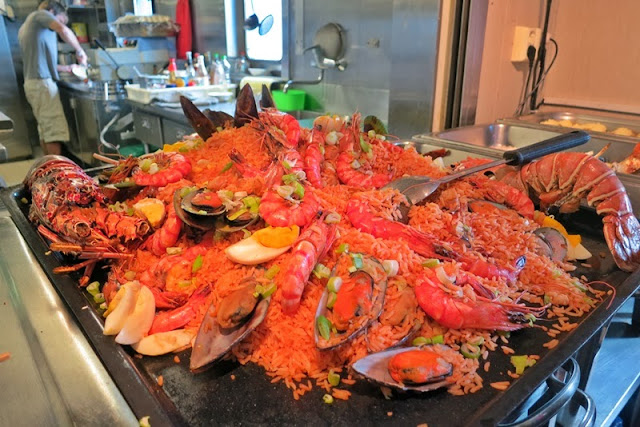 Bloody photo turn out so red for what?

Photos from phone and the S100. Not satisfied with the quality any more.... 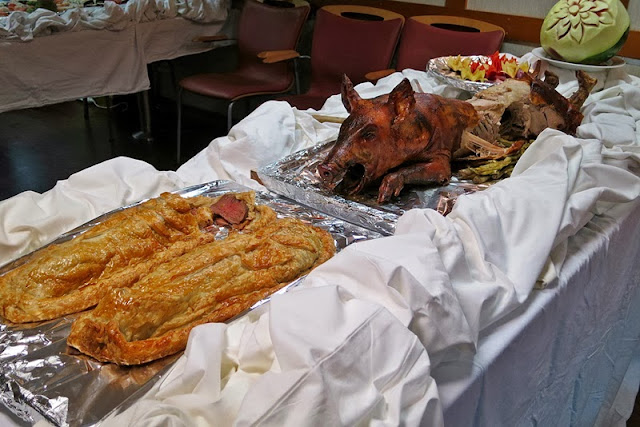 Had lobster, slow-roasted suckling pig, prawn in a zesty dip sauce - for breakfast. Overkill, yes. But it's Christmas Day!

It was a day full of mince pies, crackers and good cheese, chocolates, sweeties and my secret santa gift! 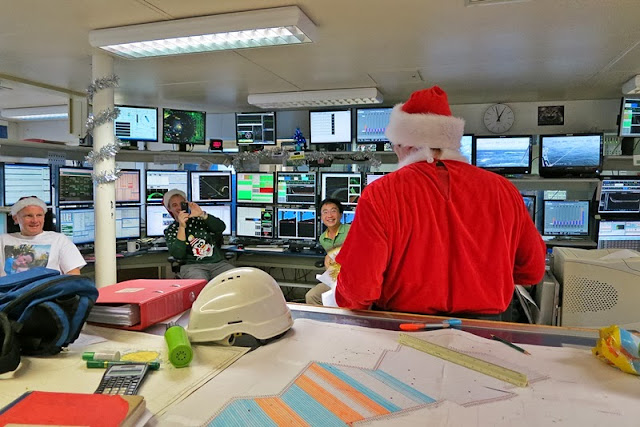 I got a toy remote-controlled helicopter. It's a bit erratic but so addictive :)  Chief Navigator donning the jolly man's suit hehhehe. 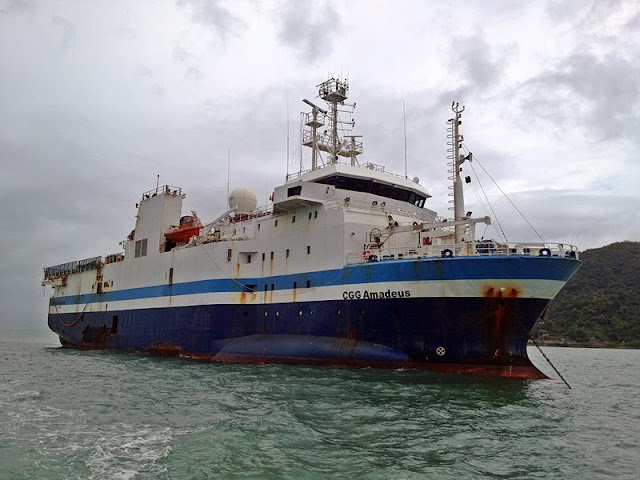 Not the prettiest boat but it's still my second home.... :)
Posted by Su Yin at December 28, 2013
Email ThisBlogThis!Share to TwitterShare to FacebookShare to Pinterest
Labels: Bookmarked, Snippets from the Sea
Location: Java Sea