OK, first things first. I must vent my frustration. It took me three days to complete writing this blog entry only to accidentally delete the published post. And no, it wasn't because I was bring silly, but because Blogger created many duplicated draft copies, I accidentally deleted this one. There is no backup and now I am starting from scratch, not a happy person now!!

So.... yea.... The initial plan was to go on a 18-day hike to the base camp of Mount Everest - The Annapurna Base Camp. I mentioned this to Vinnie and was immediately convinced otherwise by Vinnie. The popular hike up to the base is supposedly really crowded and unpleasant, just like another tourist attraction. I'm not a fan of big crowds so that definitely didn't sound appealing. Alternative? Bhutan, apparently.

Flew to Paro via Kolkata. Only DrukAir flies in and out of Bhutan and even this in itself is quite a novelty. As we disembarked from the plane, we were able to leisurely walk towards the terminal, taking pictures along the way. Other passengers were doing this as well, posing with the plane and the scenery from the airport, in general. It is certainly a nice change from those rigid airports when the officers will bark at you to get off the runway ASAP or the boring sky bridges that brings you straight from the plane to terminal. 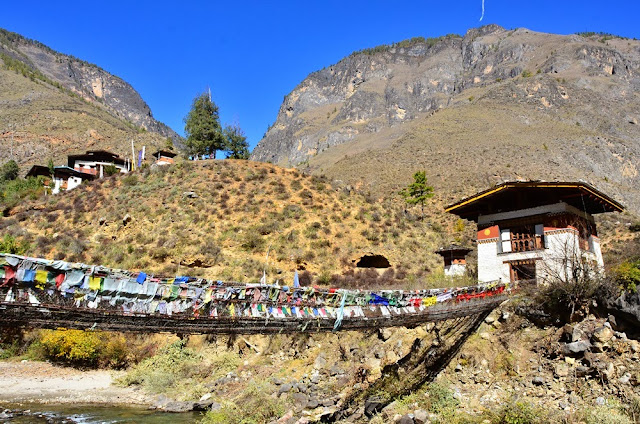 What a beautiful, beautiful country! Skies a surreal shade of blue and the sun! Well, the sun was glaringly bright, you'll definitely need to be donning a pair of sunnies. Quite unsurprisingly so, since we are on a higher altitude - over 2200 meters above sea level - and 9 degrees Cold!

We begin our journey towards Thimphu, the capital, approximately 1.5 hours from Paro. 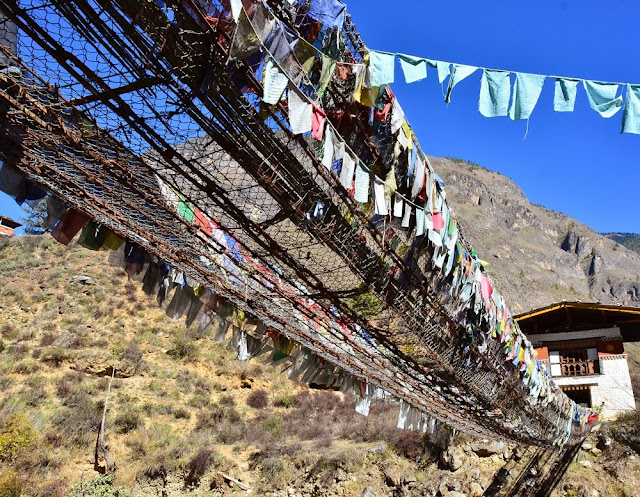 Balls of steel needed to cross this steel bridge!


My legs felt like lead trying to cross over. It didn't help matters with the gushing river in full view right underneath! 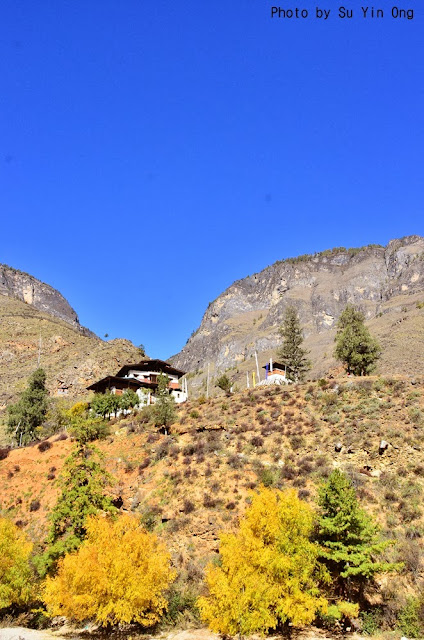 Effortless photography it is right there. I didn't even bother with my S100 compact, I was using TY's D7000 pretty much 95% of the photos taken. 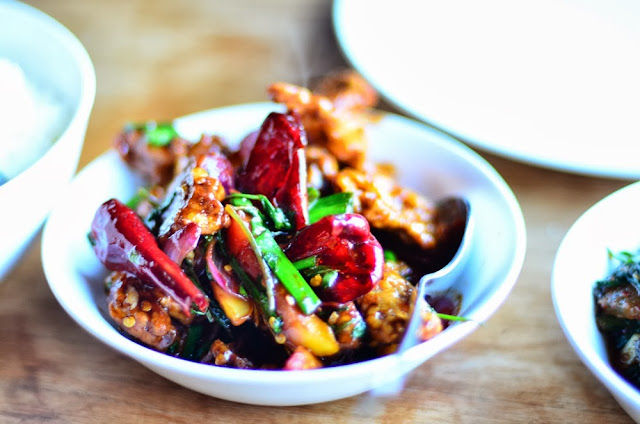 You are not likely to be faced with a shortage of chillis in Bhutan. It is a staple food item here. Chillis are not served on the side or as a dip, but as a dish on its own. Paired with cheese and sometimes mushroom. We ordered this chilli pork and I can comprehend a need for chillis here. Amidst the cold, my stomach was burning  throughout. Hey, I'll take any heat I can get! 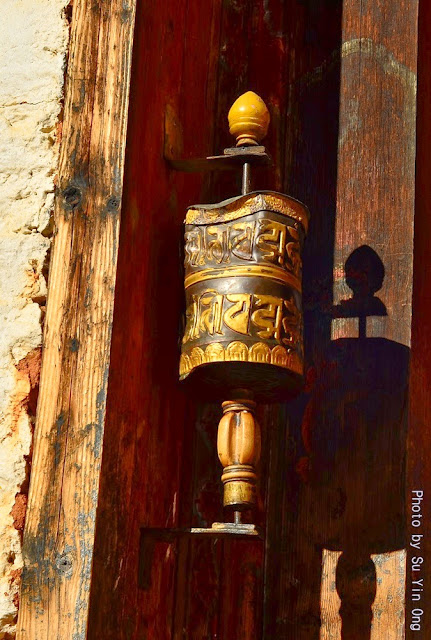 Prayer wheels installed usually at the entrances of temples and dzongs. Prayer mantras are inserted in the wheels and you rotate the wheels for an abundance of wealth, health and wives

. No, not really, but I find them a nice touch and even bought a smaller version to hang in my future house :) 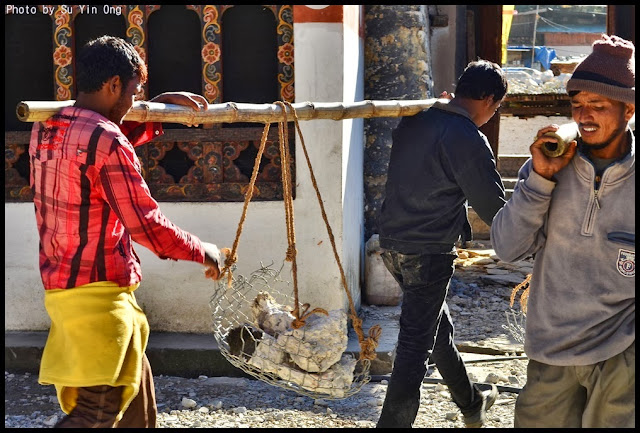 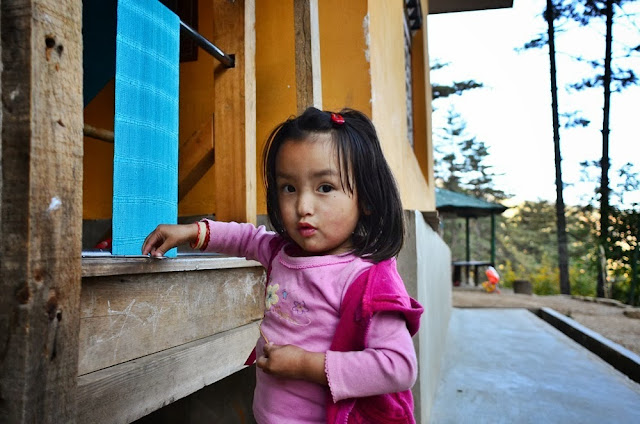 Little girl who was playing just beside her mother (who was making silk shawl by hand). Digressing, the Bhutanese women have got beautiful, striking features. I mentioned this astute observation to our guide (Kinley), to which he replied, "Yes, they are very beautiful. Until 30 years old". Well, well, well. We spent the next couple of days collecting samples and making careful observation.

There is a definite truth in Kinley's words. I'll bet kids do that to you, fast tracking on the Road to Olddom. 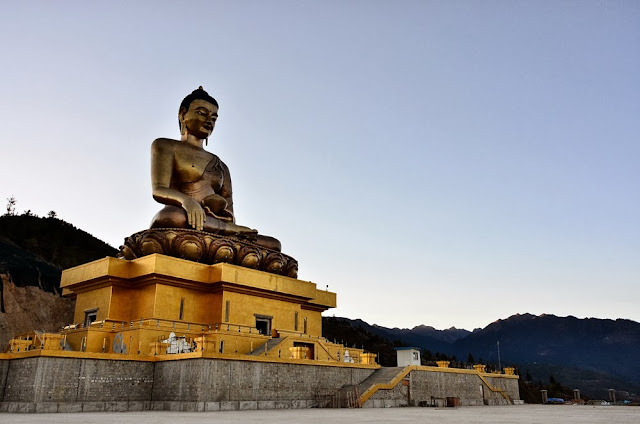 Visited a large Buddha temple in Thimphu. It is still under construction, so we walked around the outer area. The temple is donated by Singapore (surprise, surprise) and reminds me of the statue of Jesus Christ in Vung Tau (which in turn, reminded me that I have yet to blog about it. Oh well.).


It. Was. Freezing. Cold! I swear I must have been bundled in 3-4 layers of clothing but it's the wind that gets to you, really. 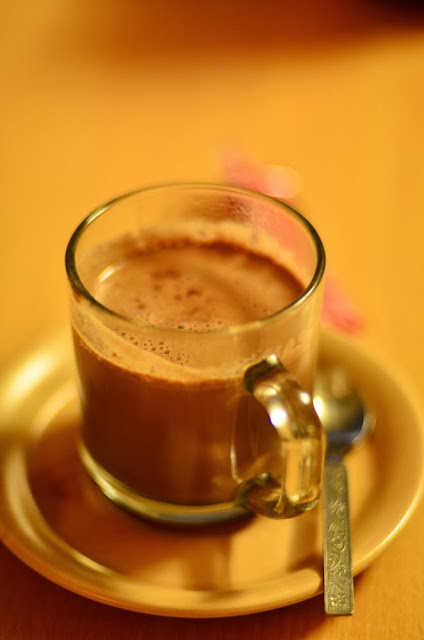 Extra strong hot chocolate on a cold night, what more would you ask for? 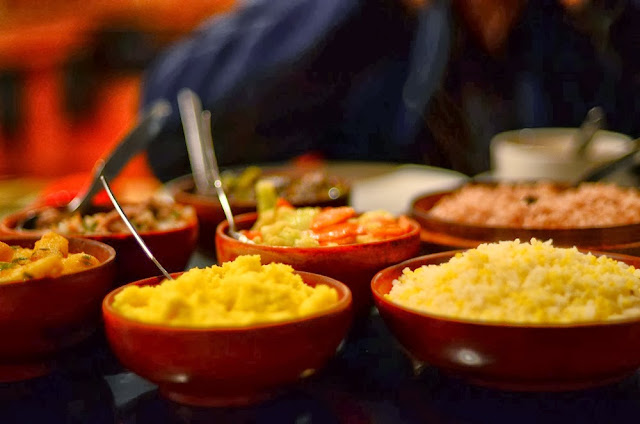 Dinner in Thimphu on our first night - only 10 dishes or so served. Red rice, various stir fried vegetables, fried rice, eggplants.... It was meh, so I didn't bother taking more pictures.

Interesting fact about Bhutan: Being a dominantly Buddhist country, the people do not slay farm animals. It is therefore against the law to farm pigs, as they do not produce milk or eggs and can only be reared as food. But thing is, the Bhutanese are not vegetarians. Cut meats and poultry are imported from India and can be served in Bhutan.


This I find to be a hypocritical aspect of Buddhism. It may not be widely practised, or even laid out as a  law in Buddhism. But in the case of the Bhutanese Buddhist, does it make you holier if you let others do the dirty work for you? As long as you do not get your hands stained in blood, does that make you a good Buddhist? But who am I to judge, I am not trained in Buddhism.

Next morning early drive to Punakha. The journey takes about an hour. It was quite unfortunate that we had to spend many hours driving and confined in a car. But it can't be helped, really. In the mountain region, the roads are narrow and winding. For obvious reasons, we can't go fast. Some of the roads are littered with potholes so bad that I developed a headache just sitting through it. 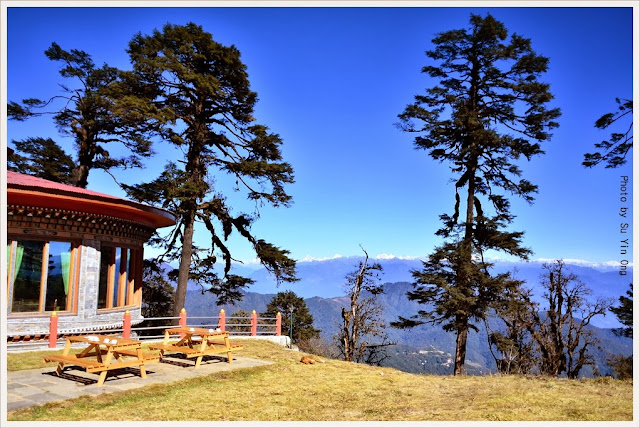 Still, the Dorchula viewpoint is worth every pothole! Kinley told us that we should be able to get a really good view of the Eastern Himalayas. And we did! Not a cloud in sight! 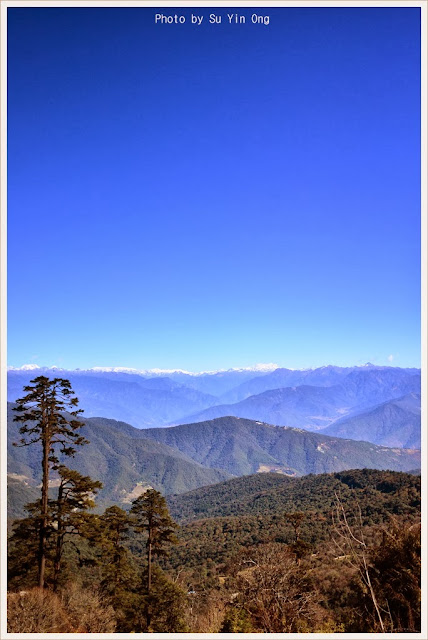 Divine, isn't it? This is why the best time to visit is during the winter season. Endless stretch of blue skies. Summer is not a good time to visit as it rains frequently and some mountains are infested with leeches. Eugh. 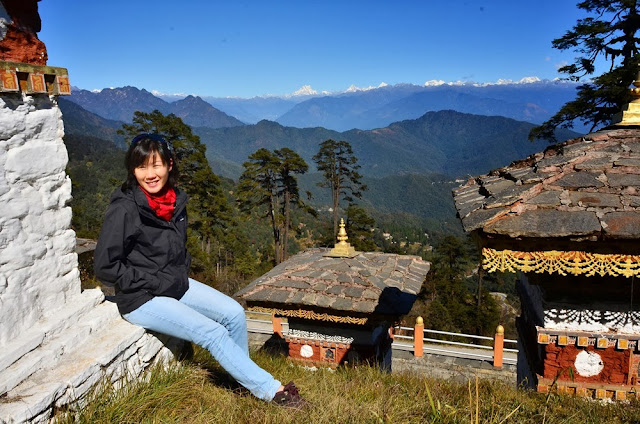 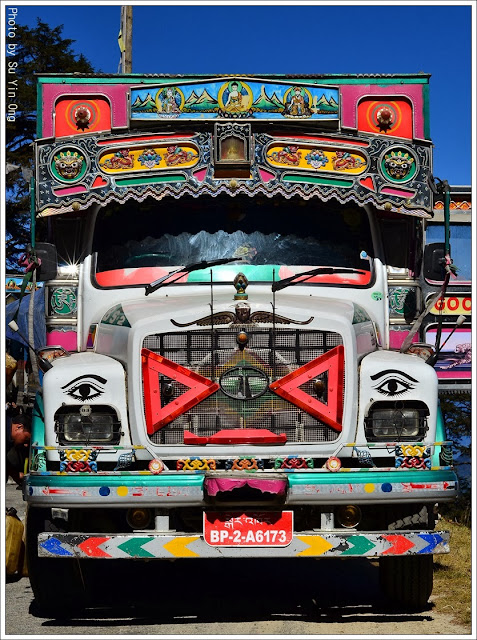 One of my favourite shots. These trucks are really cool to photograph, huge mean machines softened by colourful hand painting. They are imported from India, hence the Indian art influence. 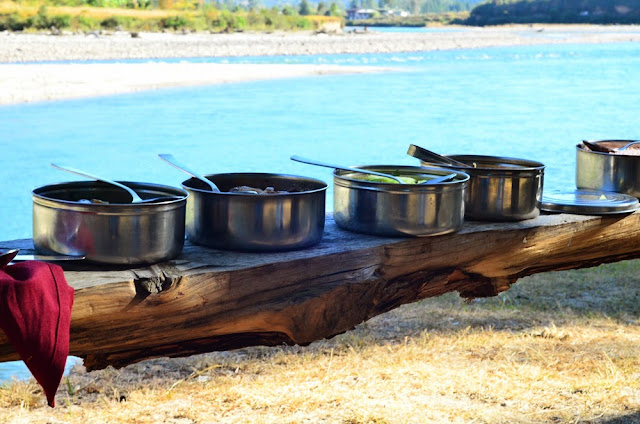 After what seemed like an eternity, we finally arrived in Punakha. Collected our packed lunch from a restaurant and drove to the riverside. It is all very nice and a blissful meal, complete with a great view.

Background scenes include a few toilets nearby that stank; clogged full of (insert word here that I cannot use in public) and piss. Hehe. And the moment we opened our goodies (red rice, various stir fried vegetables and chilli chicken), a stray dog magically appeared 8 feet away, lol. Along with a flock of crows.

Those damn crows are a persistent bunch. They hop really close (thinking that you can't really see them) and make this annoying gawking sounds. I spent more time keeping an eye on my food than doing any actual eating, hmmph.

Oh while we're on the topic of dogs; there is just an excessive number of strays in Bhutan and in India. I really don't mind them but once there's a huge number roaming the streets, that can only spell trouble. They occasionally chase passer-bys. And they howl. All. Night. Long. 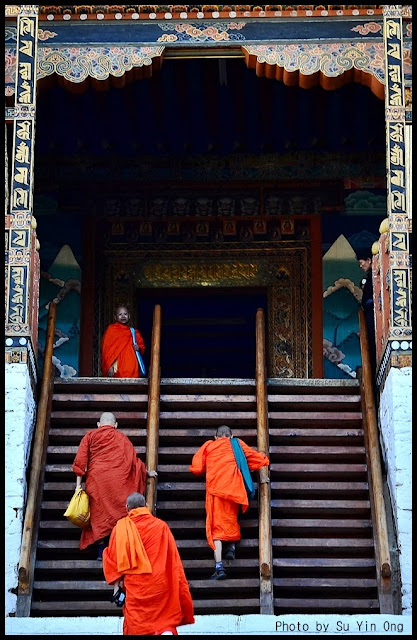 Monks climbing up the stairs to the Punakha dzong. 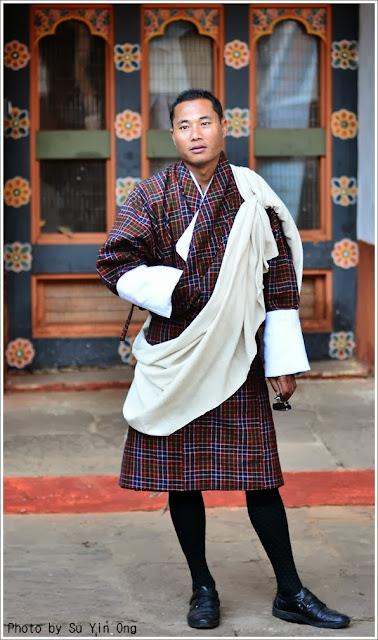 Kinley, looking resplendent in Gho, the traditional Bhutanese costume for men. It's really a day-to-day wear, not only for the tour guides, but for government officials, etc. Bhutanese who want to enter dzongs must also don the costume. The female version of the costume is called Kira, very cute, google it up if you're interested :) 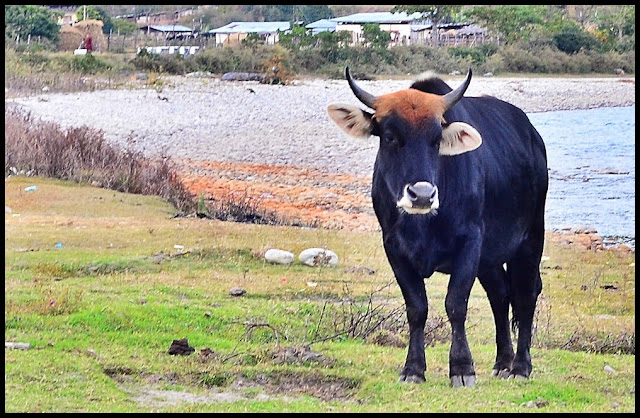 Funky-looking cows were the highlight of the trip. And funky-tailed dogs. 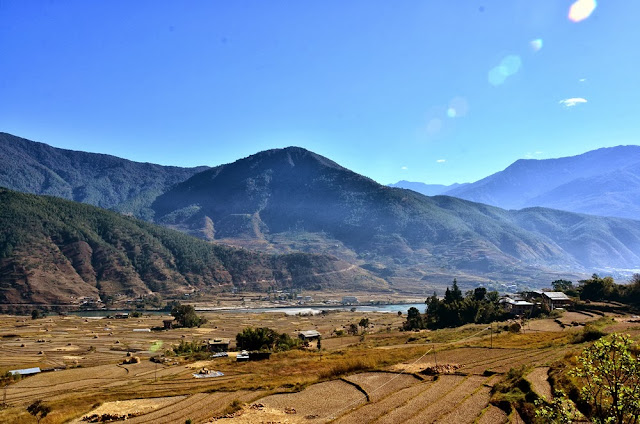 View from our hotel in Punakha. How can you not fall in love with the rolling hills and sweeping valleys?

The Punakha dzong in the morning. Minimal editing!


We left Punakha and made our way to Phobjikha, a four-hour affair. Stopped by at the Talo monastery to poke our noses around. 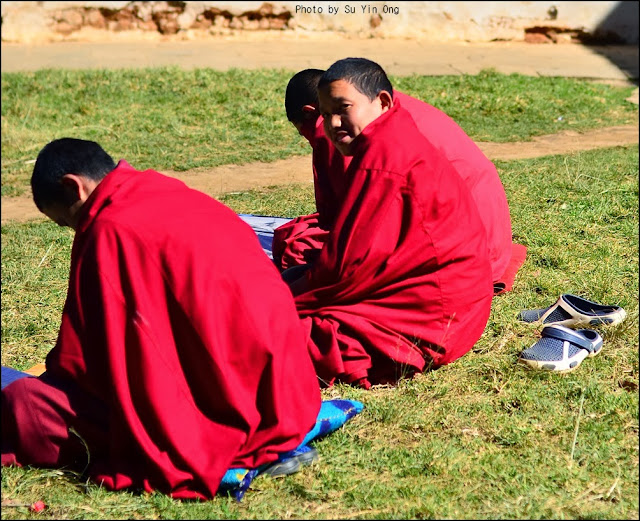 The student monks have an exam approaching, most of them are out in the sun, heads buried in books. 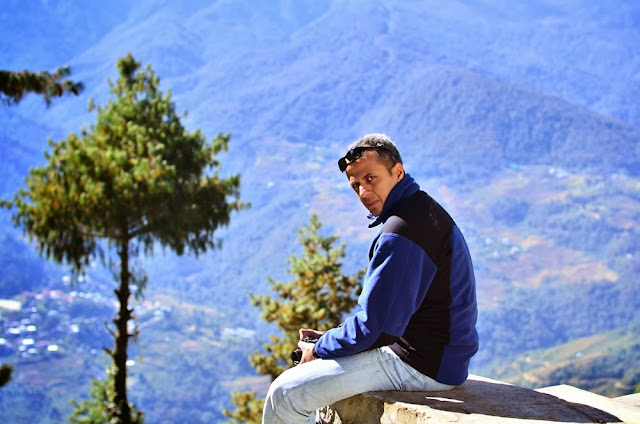 With a view like these, I would be raring to do some revision myself!


We had the pleasure of chatting with one of the teacher monks in the monastery. He talked to us about the monks' way of life - waking up at 6 in the morning, spending most of the day reading, studying and meditating. For most Bhutanese, it has become more of a job than a spiritual path. While I was there (being the only female in the monastery), I could sense eyes lingering on me longer than need be. 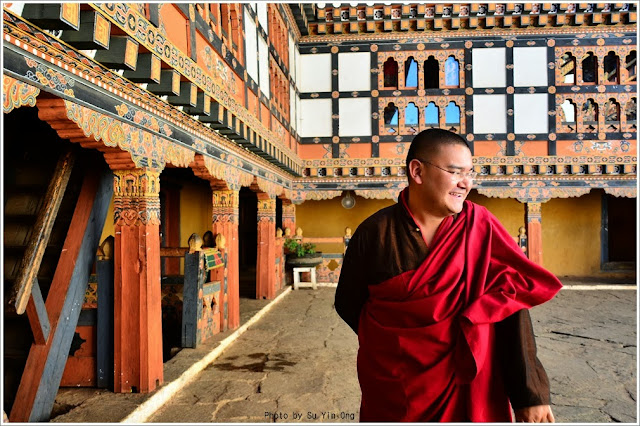 We later took a stroll towards the local farmhouses. Kinley invited us into one of the farmhouses (which we later speculated to belong to his sister) for a feel of local hospitality. It is a quaint place, with hand-painted motifs on the walls. There is also a room which acts as an altar, a place for special religious ceremonies. The decorations are protected with plastic and only revealed on important days. Several bowls of yak butter lined the altar.

The lady owner offered to serve us local drinks, to which we duly agreed. It's a very... unique... concoction. She first heated butter on a pan (over charcoal, how quaint) and added an egg to the butter. A generous dose of rice wine is mixed together and served. 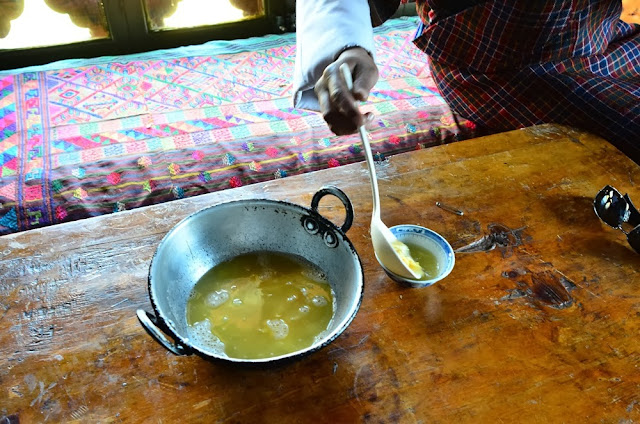 The waft of egg and rice wine in the cold is very nice, but I can't say the same of it as a drink. We struggled to finish the rice wine (even though we were each given only a small bowl) and politely declined when offered a second helping hehehehe. 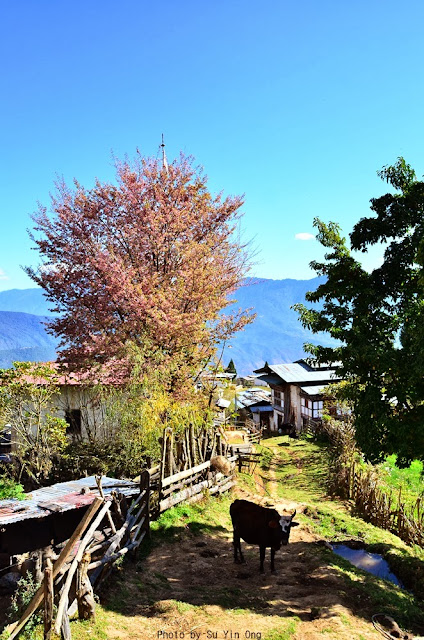 I have this top picture as my laptop wallpaper now. What a gorgeous view. Have I mentioned that the skies are a surreal shade of blue? 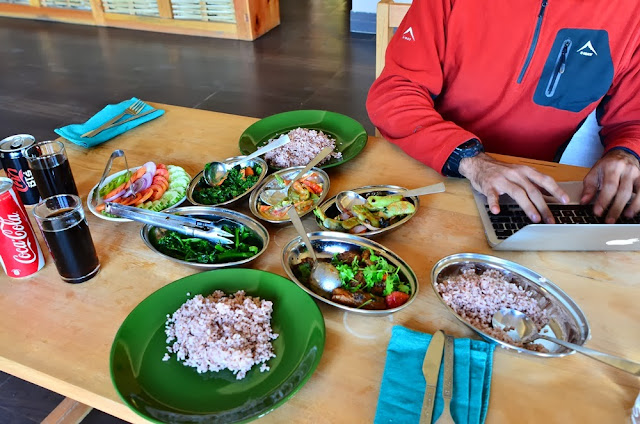 Ending this post with the usual food shot. Of red rice, various stir fried vegetables and spicy chicken. The broccolis were really quite good! Well, better than the ones I'm having onboard now anyways (frozen veg, defrost, cooked, re-frozen and re-heated...yummy). Give me fresh greens anytime, I'll be a happy person

Posted by Su Yin at December 17, 2013
Email ThisBlogThis!Share to TwitterShare to FacebookShare to Pinterest
Labels: Around the world - Asia