Sex And The City 2

How can you not love Samantha? Lol.

Eve-Lyn somehow got us free tickets for the premier of SATC2 (won from Fly FM lol) and I was oblivious to that fact. Dressed in my work clothes, I felt like the ugly duckling amongst the other fancy, overdressed moviegoers. Whatever lah, care I don't. But Carrie I do! 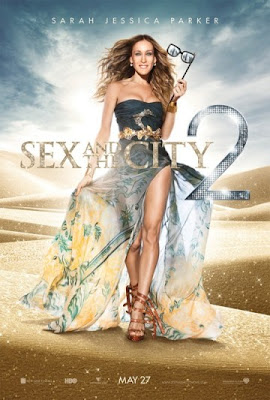 ***Spoilers ahead*** Read at your own curiosity-kills-the-cat-risk.

The first SATC left us with Carrie and Big happily married in a small wedding ceremony. Fast forward 2 years later, they now live together in this OTT townhouse complete with a security locked walk-in closet.

Carrie is paranoid that she will end up being one of those boring couples who lay on the couch and watch tv, not talking to each other when Big slowly moulds into that sort of figure.

Then Samantha gets a filthy rich Saudi Arabian businessman who is interested in her PR profile. He offers her and friends a 7 star stay in Abu Dhabi in exchange for publicity on his hotel. So the so-called adventure begins with the four girls being flown off into a foreign land with a hundred luggages and kua cheong dresses intact.

Sorry to say but the movie is a flop. I find most scenes to be cliched and the girls look kinda awkward together. Oh but I love Samantha's witty comeback! Got me LOL-ing the whole movie through. Her shocking in-your-face-flirt comments are to die for. There is a scene where the girls hang out at a bar in the Abu Dhabi and then they got called up to the stage where they sang the karaoke version of 'I am Woman'. Super eye-rolling. Then Miranda takes the role of the one who gets into the travel books, culture. Like they had to force a tour guide into one of the girls so that the audience knows what's going on.

Oh! One thing that I am super impressed is the number of scenes that actually got through the ridiculously strict censorship board! Hahahahhah the 18sx scene I love the most is the nanny go-braless scene. You also get to see male anatomies standing at attention ;) Priceless. 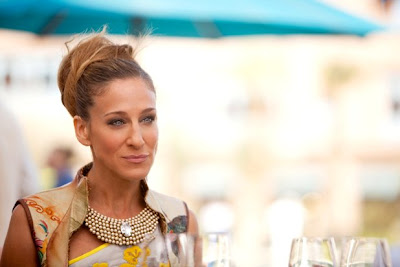 What else to look forward to? Clothes! I find as though the directors are trying to stuff in as many glaring / couture / outrageous / gorgeous clothes into the movie. Even when Carrie and Miranda were headed to the souk (spice market) they were dressed like wanna go cruise or something liddat lol. 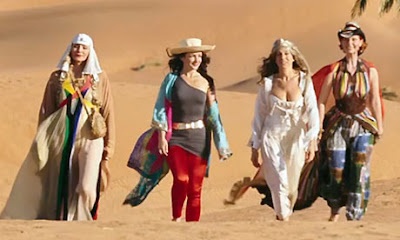 But cannot deny some of them are really gorgeous. I love the figure hugging black dress that Samantha wore during the opening scene, the orange dress Carrie wore on the beach in Saudi, by the pool side... but some are a bit kua cheong la, like this one here on the desert la. Camels also can get scared wei.
Oh jeez, Carrie looks really old in the movie. Even Samantha can look more fab than her.
Posted by Giffo Hoots at June 16, 2010
Email ThisBlogThis!Share to TwitterShare to FacebookShare to Pinterest
Labels: Review