Started lesson on Butterfly.
Kicking, curvy motion with legs bending only a little bit. Stomach push in, the rest follows. Did a few laps of kicking, with breast-stroke breathing.
Hand motion drawing a circle right down to the chest, then pull all the way upwards till thumb touches thigh. Hands straight, move parallel to water surface and land again. Try with kicking, but without breathing.
Breathing: heads up as hands at the back and tuck chin in as hands goes under.
Attempt fly with breathing.
Then alternate practices with fly and front crawl.
Posted by Giffo Hoots at August 23, 2007 No comments:
Email ThisBlogThis!Share to TwitterShare to FacebookShare to Pinterest
Labels: Aqua Dynamics

Back crawl - stressed on face up, body straight.

A few laps on breast stroke.

Dinner with all the lao pengs at Mumbai House, Crystal Point which costs RM40 per pax. Quite pricy in my opinion... since it's not exactly well-known and not in a hotel. Previous dinner while I was head of S&R was at Berjaya Georgetown Hotel and the attraction was Haagen Daazs ice-cream also included. But this one here... the only ice-cream served was this funky tasting jagung-like ice-cream with bits of raisins. 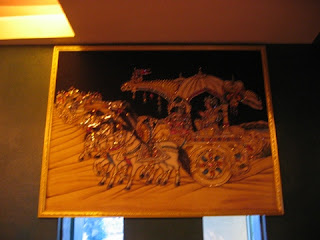 Anyway, curry was good, especially the naan with mutton curry and mint sauce. The environment was not bad too, though lighting may be way too soft and bit too dark to eat in. They serve drinks in this cute container. 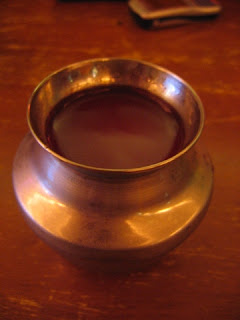 Some kind of cordial 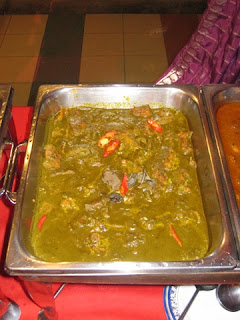 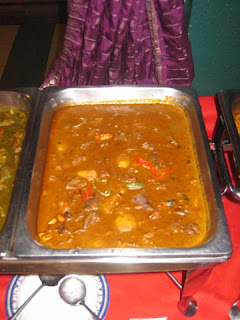 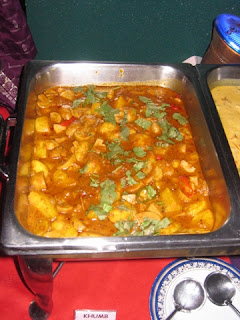 Khumb of potatoes and button mushrooms 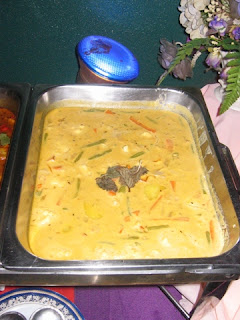 Po Koon, back from Japan bought the load of us gifts. I got this cute pair of Jap socks and fan. 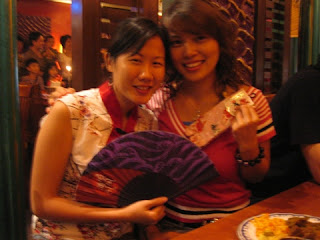 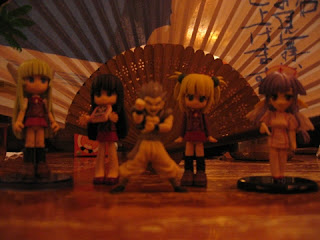 Figurines for the guys

Now feeling heaty after all those curry... 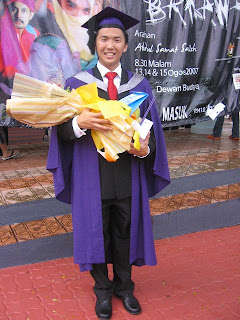 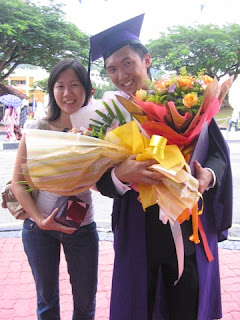 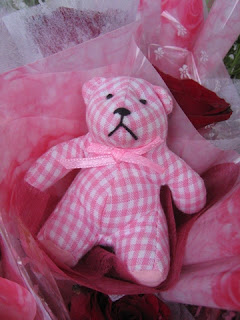 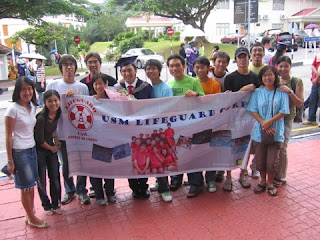 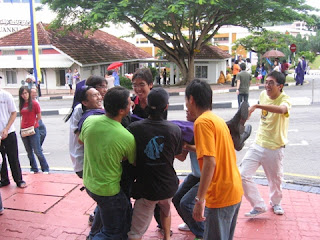 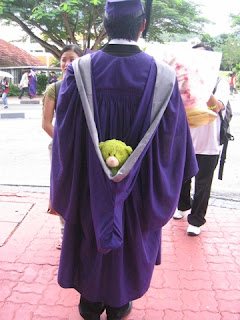 Posted by Giffo Hoots at August 18, 2007 No comments:
Email ThisBlogThis!Share to TwitterShare to FacebookShare to Pinterest
Labels: Events

3 days ago, I was finally tested on my skills of lifesaving.
I had changed duty slots with Chin Teng, and then changed positions on high chair with Hong En, so there I was on the pool deck.
Just a short time later, I can see those two big-sized Middle-Easterners creating quite a splash some distance away. I can see the bigger of the two struggling and actually pushing his friend down. That bulky guy is drowning.
I did what I could think of first, grabbed a kickboard and went down into the water. I pushed the kickboard to the drowning guy, but he was too busy pushing his friend down and trying to stay afloat that me doing so could be as significant as making hand signals at him.
Seeing that my kickboard plan failed, I did the next best thing I thought then. I went forward, and tried to get him out onto the surface, his whole head was already submerged in the water. He was so huge, that I could only get him out for a max of 3 seconds, then HE PUSHED ME DOWN WITH HIM. I must admit, I was pretty darn terrified. Next thing I know, I was down the water and feeling my eyes getting blurry as I wear contact lenses.
Did my best to pull him to the side of the pool and just as I was about to reach the side, luckily Cau Cieh took hold of the guy and gave him a final pull to the side.
I am so glad nothing worse took place, to me I mean. Anyway I learnt two things. Have done the kickboard maneouveur thing, and two times out of two times the victim was not able to catch hold of the board. Next time I swear, I'm not going in without something as solid as a pool buoy. Second, this is what I learn in the first case, never do plunge in, it will actually confuse your coordinate. That one time I did that, as I resurfaced, I had to search back where the victim was. I would suggest straddle jump as a better alternative.
I don't know why some lifeguards take pool duty so leniently. We deal with lives, and some of them are very much not alert on the pool deck.
As much as I blame myself for my mistakes, knowing that I could have done much better, I had to give myself a pat on the back, that I managed to save someone triple my size. Later on, looking very shaken, he thanked me. Oh, I was real modest about it, told him, "No problem, it's our job :)".
Posted by Giffo Hoots at August 18, 2007 No comments:
Email ThisBlogThis!Share to TwitterShare to FacebookShare to Pinterest
Labels: Aqua Dynamics

New lesson on back crawl (back stroke)
Back to the wall, lean head on deck, and perform back flutter kick. Kicking supposed to keep body horizontal.
Floating face up with flutter kick, hands at sides. Face tilted to sky, stomach in. Also try floating, with toes above water surface, hands sculling.
Hand movement: Lift hand up, touch ear, twist wrist till little finger faces backwards, and let fall into water. Push underwater, elbows bent, palms to the side. Repeat.
Practise, alternating with front crawl and back crawl.
Posted by Giffo Hoots at August 14, 2007 No comments:
Email ThisBlogThis!Share to TwitterShare to FacebookShare to Pinterest
Labels: Aqua Dynamics

Still on breaststroke.
Breast stroke swim with hands at side, only kicking, to encourage lifting of head to breathe.
Breast stroke hand pulling with flutter kick.
Water treading, hands in circular motion: opens to the side and U-turns back, cyclic motion of legs, one at a time.
Posted by Giffo Hoots at August 10, 2007 No comments:
Email ThisBlogThis!Share to TwitterShare to FacebookShare to Pinterest
Labels: Aqua Dynamics

Got to cure a bit of homesick-ness during the weekend and grandma's famous perut ikan! No other dish can beat this one.... and no other person can make it better than her. 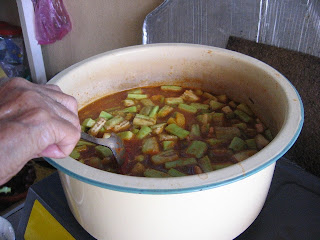 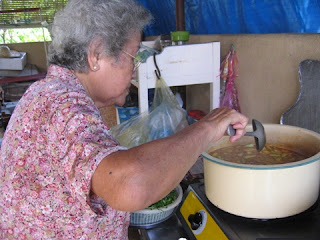 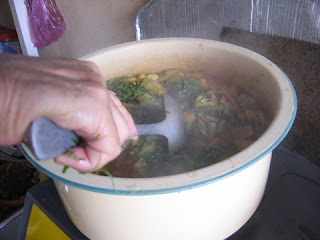 And then dim sum in the morning, 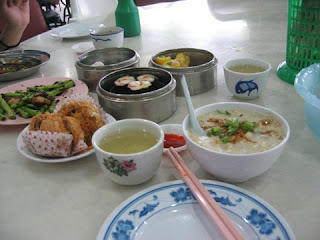 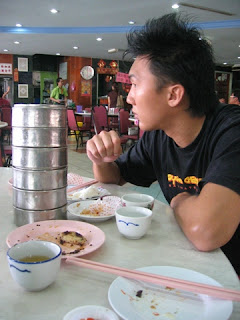 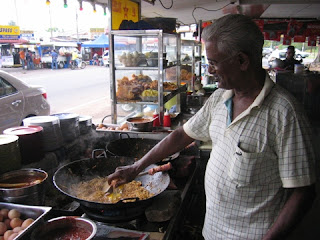 And lastly, my favourite picture of the day, such a cute expression.... (Pickles la I mean) 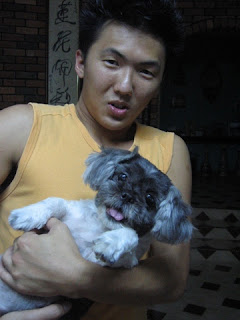 Posted by Giffo Hoots at August 08, 2007 No comments:
Email ThisBlogThis!Share to TwitterShare to FacebookShare to Pinterest
Labels: Comfort-Homeliness