Status: In a Relationship... with a phone.

How long has it been since I actually blogged? I started off as a person who vents her anger and frustrations through the blog but recently, this blog has shifted directions and seems to serve as a diary and equates more of a food blog. Hell no!

Recently, I've been hanging out with my friends a lot more frequently than I did back in Penang. One big turn-off with these people are that they are constantly on the phone/texting. It hit me in a wave of realisation that no matter how we all strive to keep in touch and bond, but when that moment of opportunity comes along, instead of optimising every precious moment, again, we text and face our mobiles more than our own friends.

When I am out with my friends, I normally ignore my phone unless a call comes in. Any messages are deemed non urgent and can always be replied when conversation is sparse. Therefore, I am constantly annoyed when friends of mine treat their phones with more respect than myself!

Each beep or tweeting of the phone is hurriedly answered like a newborn baby crying for milk. What the hell? Don't these people find it rude to answer calls and text in the presence of others?

Ok, I am ranting. Admittedly I do the same, sometimes but not overly so. I may not be very popular to receive text messages every few minutes but I do have the sense to not be in an overly obsessive relationship with an object that will never give me the same luv.

Cheers!
Posted by Giffo Hoots at November 22, 2009 No comments:
Email ThisBlogThis!Share to TwitterShare to FacebookShare to Pinterest
Labels: Rants

A short post on this banana leaf place I had at Jalan Telawi, Bangsar. Andy first introduced the place to me during the first few weeks' stay in KL. And now, I shall pass this valuable information to my fellow peers.

I had a banana leaf rice craving and so I suggested this place to Stanley, of course he terus 'on' already hahahaha. 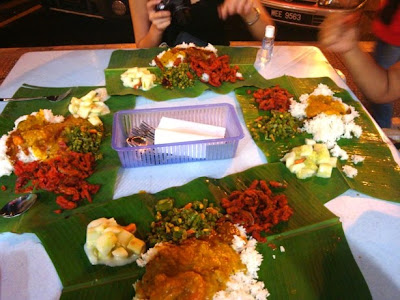 We got ourselves the vegetarian set, which comes with this cucumber salad, deep fried brinjals and mixed veggies. 3 different types of sauces can be selected from - dahl, fish curry and another which I cannot recall. I asked for all of 'em. 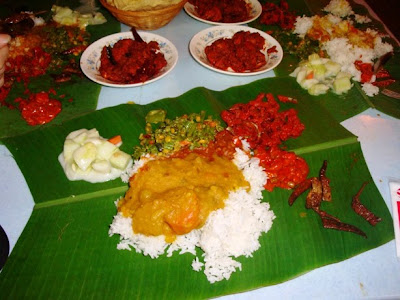 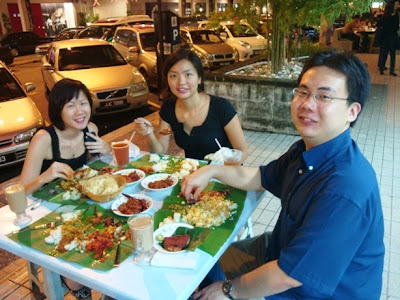 Meet Jessie, our Chinese colleague who will be undergoing a cyst-removing operation from her ovaries the coming Monday... She's a hyper girl! Very nice and has got style, babeh! :p

The so-called CGGV FoodVenture headed by the food lover Stanley actually planned to have a bit of a fancy dinner somewhere in KL. At the same time, we also wanted to have something German and beer to celebrate, uh, Octoberfest (ok, I admit it's already mid-November and I'm seriously slacking in updates, not that the readers care anyway right? :p). But that is all crap lah, who needs a reason to celebrate when the highlight is food, food and more food? 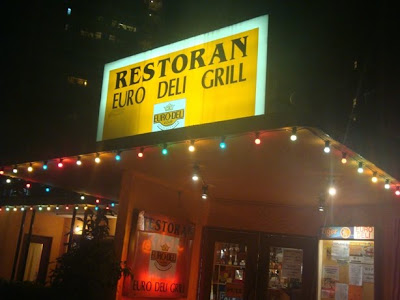 After work on Friday, we headed off to the Euro-Deli Grill off Jalan Yap Kwan Seng. Euro-Deli serves Swiss-German dishes and obviously non-halal, Euro-Deli products of pork, ham and sausages can be found at Cold Storage, Tesco, Jusco and other supermarkets though I cannot recall ever purchasing their products from these hypermarkets. Anyways, any non-halal grills is a definite must try! :D 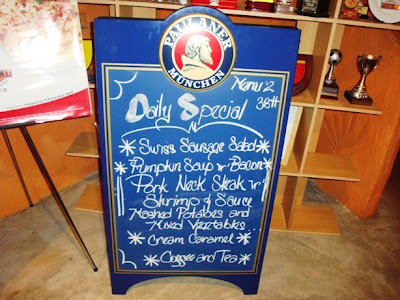 The restaurant is also having an Octoberfest promotion but that was to be on Saturday, Oct 31st, which is the next day. The buffet spread seems to be made up of various mouth-watering dishes with meat making up the majority. At RM70+ per pax, it's an all-you-can-eat but since we're there already, doubt that we'll be making a beeline here anytime soon. 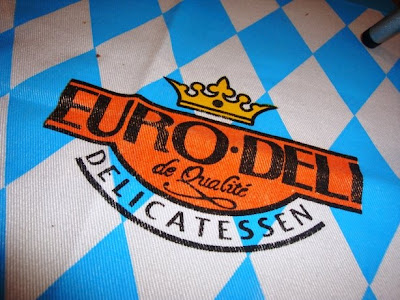 The place has a quaint decor and a big plus- very good services! The waiter, bustles over and is always offering help or eager to answer our questions and has a great sense of humor. We started our dinner selection with a bottle of German beer. 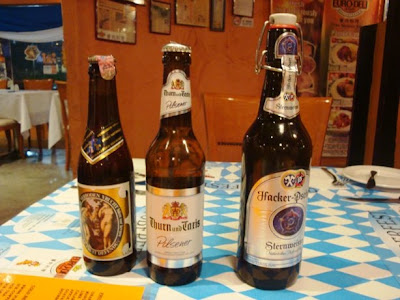 There are three different types the waiter offered/recommended. I chose the one on the further left, which is called the Forbidden Fruit. 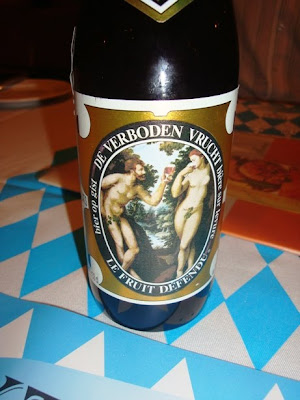 As I chugged on my liquid gold, I noticed that there were sediments at the bottom of the glass. A quick call for our waiter answered my queries. Those 'sediments' are actually (dried?) fruit bits that are supposed to enhance the flavor of the beer. Sadly, our waiter could not tell us what sort of fruits were used, though I suppose the name of the bottle should give us a clue ;) 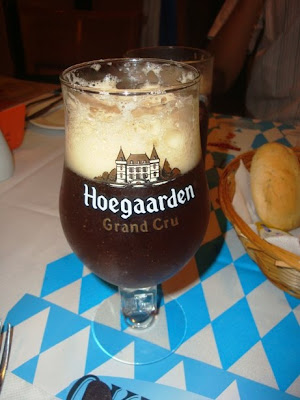 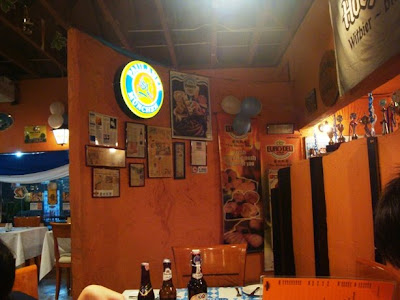 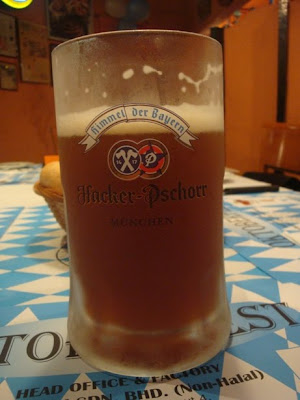 The other 2 fellas got themselves the bigger beer bottle (determined to outbeer me), Hacker Sterw. Though I did not get a chance to taste it, the guys seem to love the taste.

All of us had a hard time deciding on our main because all of the dishes look so good on the menu! In the end I settled for Stuffed Pork Belly. Lam went for Pork Knuckles and Stanley wanted ribs. But then I pointed out another dish on the menu called 'Mixed Roast' which includes all ribs, knuckles and belly, which made Stanley do a double take lol. Obviously he went for the, uh, universal one hahaha.
For starters, all of us shared Swiss Sausage Salad. I think it's probably a bit of a mistake to jump right into a meaty appetiser lol. Oh, by the way, did I mention that almost everything in the meny consists of m.e.a.t? And yes, that includes dessert (Rosti Potatoes with bacon, Quiche Lorraine- Homemade Bacon Pie, Spatzle with Bacon... you get the idea). God. 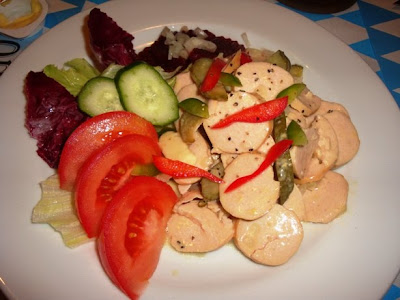 Sliced Swiss sausages, tomatoes, gherkin (pickled cucumbers), beetroot, red cabbages, lettuce, onions and some sliced capsicums. It's a cold dish and I thoroughly enjoyed every bit of it. 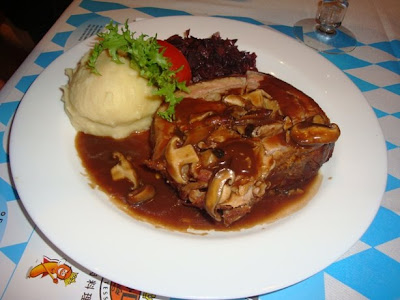 And my Rolled Stuffed Pork Belly arrives! Stuffed with what you say? More meat of course.... Drenched in mushroom sauce, the saliva-inducing meal comes with sauerkraut and mashed taters. The dish doesn't look very intimidating from this photo, but I assure you, the serving is huge. 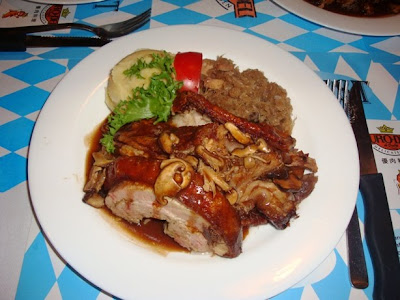 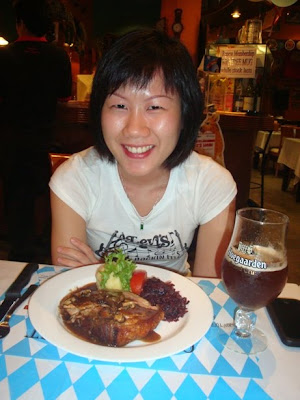 Can tell the beer is taking effect... Face is slowly transforming into a large tomato. The salty pork makes it a great combination with the beer. Sigh.... Getting hungry blogging this. 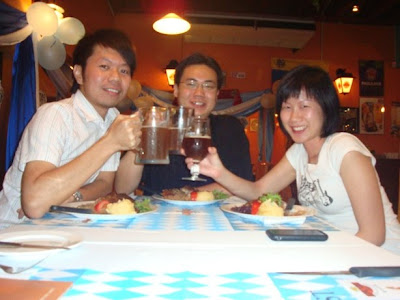 Obligatory group photo.
I hard a difficult time trying to clear my plate, which I ended up unsuccesful. Instead, I asked for the waiter to pack up the rest of what was left on the plate (50%). Stanley, of course came out tops and cleared his plate clean whereas Lam can only be credited for finishing his meat but not the vegetables. bad boy! 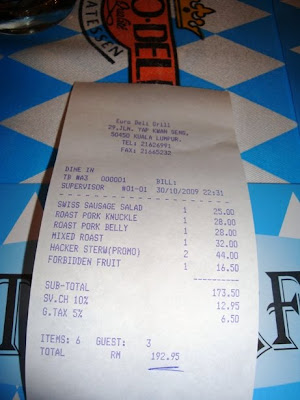 Bill came to about RM60+ per person. A great meal to enjoy once in a while.... but I must say I felt a bit sick after consuming so much meat and with the bloaty effect of the beer.