I know it's a bit ironic to blog about greasy food when my previous post I was rambling about going on a detox diet. Bah. Anyway this was about a couple of weeks ago, completely forgotten that the pictures were still stored in the camera.
Obviously it was Stanley again who came up with the location of the next Food Venture. He says that he's been very curious about 'perut ikan', ever since I mentioned it to him some time ago when we were discussing nonya cuisine. Then I think he went on a search of restaurants around KL serving this type of dish lol.

The restaurant is a one-lot large and is situated in SS2, Petaling Jaya. Wasn't very hard to find the place. It's situated in the not-so-happening part of PJ. We reached at 9:30pm and were quite anxious whether the cook will still be willing to serve us as the place closes at 10pm. To our relief, they do.

BiBiChik, cute name for a not-so-cute restaurant. The place is also featured in Ho Chak 8TV. 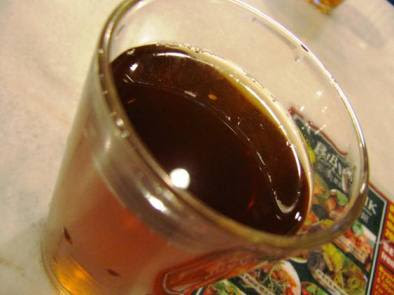 After much debate and discussion, we finally decided on 4 dishes -_-. Of course a bit too much for 2 people dining but Stanley's greatest sin is gluttony triple -___- 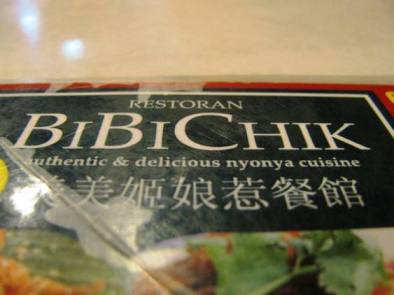 Menu. Some of the restaurant specialty is the honey sotong or something like that and I forgot what else. 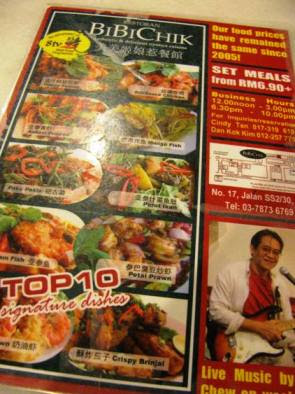 BiBiChik also offers a live band performance on weekends. As we were there on Friday, we didn't get to experience that.

Anway, I ain't there to listen to no jazz. Let the stars come out! 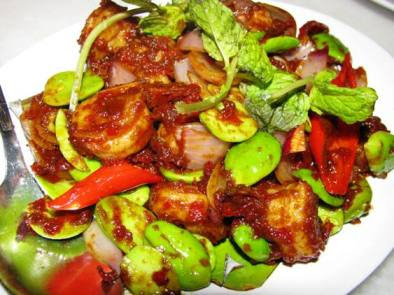 What I think:
I am so used to Ah Ma's style of sambal petai that I do not find this homesick curable at all. BBC's version has a more prawns than petai (Stanley noted that the name of the dish is prawn sambal with petai, implying that petai as the side, so lack of petai is acceptable), sambal is too dry for my liking (I always prefer a healthy moist and rich sambal) and petai seems undercooked. Sigh. Upside is the abundance of prawns though. 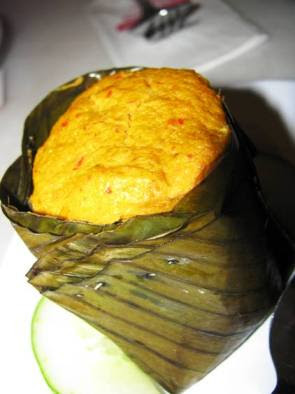 Again, another disappointment. The foundation of the otak-otak were all there but the 'oomph-ness' just isn't. All the fish fishes were stuffed to the bottom of the otak-otak instead of evenly distributed here and there and throughout. The daun kaduk is also undercooked. A typical (good) otak-otak would crumble as you pierce your form through but this is one feisty otak. We had to tear and pull to wreck the leaves apart. -__-

Steamed otak-otak is typically Northern nonya style whereas in the South, grilled otak is more common.

Peeling off its layers... 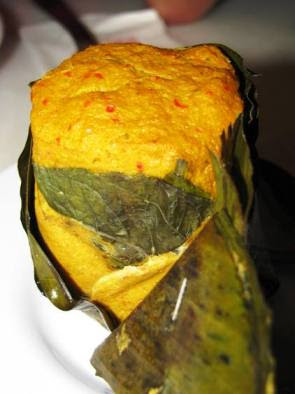 Another shot of the otak with the banana leaf (? not confirm with this, maybe lotus leaf? No idea) 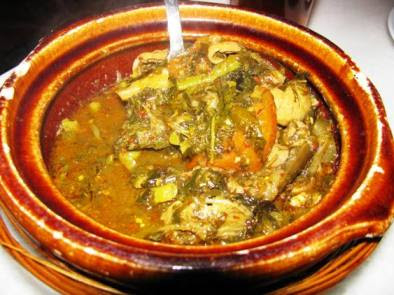 What I think: Again, I think I will be giving more and more biased opinion just because I am accustomed to Ah Ma's great cooking. First of all, the fish stomach were cut too large and tend to be really chewy. They don't smell good too. Weird in fact. However Stanley seems really satisfied with the perut ikan. He finds it similar to assam laksa and has no problems adapting to its fishy taste.

By the way, as the food arrived, both Stanley and I were really into taking pictures of the food, not even touching them. The cook/owner seems to get suspicious and marched to our table asking us why we are snapping pictures hehehhehe. She had this very cute paranoid look. We assured her that it's only for personal view and we would like to recommend the place to others too only she left us in peace. She also said that rarely youngsters know how to savor perut ikan ;) 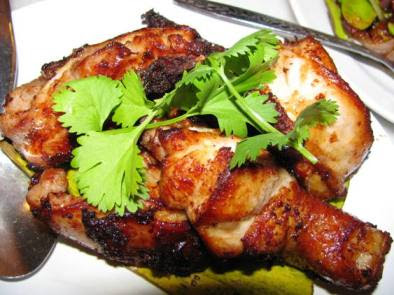 Which I find similar to belacan chicken. This one gets a thumbs up from me. The inclusion of garlic in this dish is very obvious, which I definitely don't mind. I suppose I've always liked belacan chicken and I think you can never really go wrong with marinating and frying chicken hehehe. Stanley didn't like this one though because he found one of the pieces of chicken is still a bit raw close to the bones.

Bill came to about RM54 overall. I think the prawns with petai costs the most. I wouldn't be raving about this place, as I don't find the dishes 'click' with me lol. I still think Aunties Ssam rocks. I think I'll bring Papa and Mom over there whenever they visit KL. 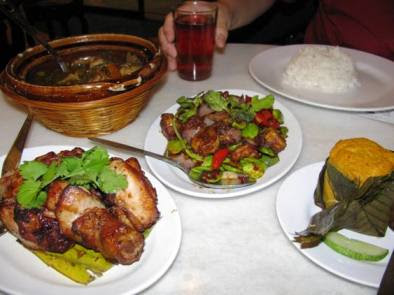 Anyway, what do you think of the pictures posted? Are they too large as compared to earlier posts (where I use the default sizes on blogger). Please comment.

Also since my photos are hosted on Photobucket, photo loading seems to be as fast as a crawling snail. I think I will revert to the default blogger layout.

p/s I went through my old posts, trying to search for an entry on Ah Ma's perut ikan and to my horror, there is actually an entry.... without a clear picture of the perut ikan! How can!

p/p/s Seriously considering taking some time off work - as in a long period of time - to learn Ah Ma's magic in nonya dishes prep.
Posted by Giffo Hoots at April 04, 2010
Email ThisBlogThis!Share to TwitterShare to FacebookShare to Pinterest
Labels: Food-Local Slurps, Review