I should call the Detoxification entries as 'The Failed Attempts of Detoxification' hahaha. I admit I succumb to temptation faster than you can say "McDonald's".

But McDonald's wasn't my downfall.
I prepared so much fruits and vegetables for Day 2 till I can sense the paper bag that holds all the food container and fruits is close to tearing apart :p

Before the downfall is revealed, let's go on a detox fairy tale walk and see what I had for Day 2 :p 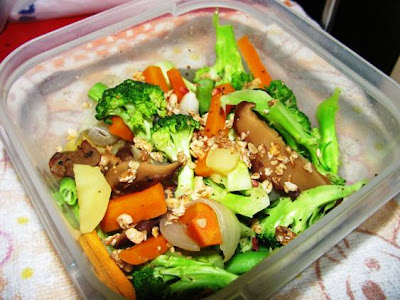 Snap here, snap there, in the end they all look the same.... just possibly the carrots and the broccoli changed position. Well not my fault since there were very limited ingredients I bought at the market.
Anyway these vegetables were cooked the same time I made the porridge for Day 1. Hehe.. so you see the remnants of the mushrooms, red dates etc. Tastes goooood nevertheless! 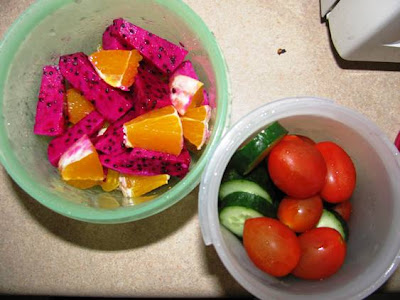 The red from the dragon fruit kind of got assimilated into the oranges so they look really cute with dark pinkish edges.
There's really a load of food for today... plus bananas and there shouldn't be any reason I should feel mournful or close to giving up... until I received an email saying that Kak Nurul (someone from admin) made sambal udang petai T____T

My weakness! How can I refuse that! Some more I ngam ngam went into the pantry and Kak Nurul was just taking out the huge bucket of sambal petai and was just about to heat it.

The sambal udang and petai is heavenly loh ^^ Also had those with fried egg and ikan masin. Also got brinjal but there's like only 1 left after a few people helped themselves then I paiseh take the last one because I didn't contribute anything hehehe.

Justin and Shifa were livid.

Hehe.... nolar, they were pretty cool about it, but that was after they 'cuci' me kau kau. I coaxed them also lar saying I will still join the program lol. But it was really worth it la after kena scrub like that. Petai is soooooo goooood.

Dinner is a little bit more subdued. No cooking involved: 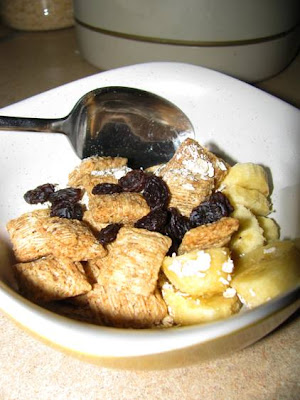 Bear in mind this is the non-ganas detox so cereal and milk oso can yay! Had my favorite Post's Shredded Wheat with Honey Nut yummmmm with sliced bananas, handful of raisins and almonds. 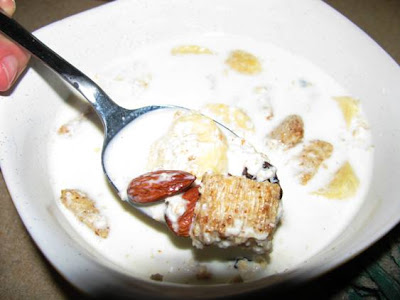 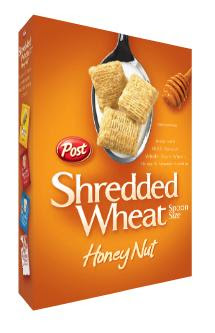 My newest addiction... Dunno why but I feel super happy whenever I eat Post cereals :D Used to favor the Post Selects Cranberry ones but after I tried this, all else seem bleargh. 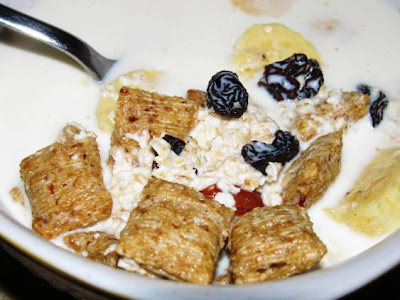 I'm already contemplating what to have during the 'buka puasa' meal.... Well technically, the puasa already buka-ed but what the hell!