Happy Year of the Tiger!

It's been pretty hectic since I left back up north to SP. I took half a day off from work on Friday and then a train to Subang Jaya to meet up with my cousin there. Initially my cousin wanted to leave as soon as possible as to avoid the horrendous jam that can only co-exist with all those balik kampung festives.
Mana tau, as I met up with her at Dorothy Perkin's, which is already close to 1:30pm, she had the nerve to shop and get in some last minute CNY clothes there. Then, only we headed over to Sakae for lunch. Lol, there goes our plan to have an early start on the road.

Digressing, while waiting for my cousin to meet up at Subang Parade, I broke my non-coffee puasa lolz. It has been a month (plus minus) since I'd last had a cuppa. It was a combination of having to wait for Elyza and also a slight headache that prompted me to order an iced Americano. *smack lips.
By the time we were leaving KL, it was already close to 3:30pm. Elyza will drive during the first half of the journey and I will settle the rest. Elyza just bought a smart tag, thinking that it would save her a lot of hassle on the road but dang! First toll the darn reader beeped us and blinking the message "Kad Tidak Sah". What an ass toll! Elyza was furious because she had just used the card earlier during the day and it was working fine, plus, she reloaded like RM200 in it the day before. Further checks with the customer service hotline (took us quite a few minutes to get through their number) had us informed to check with the PLUS office buildings nearby toll exits.

Traffic was pretty heavy but it didn't come to a total standstill. The worst one was during my turn to chauffer. Just after Auto City in Juru we hit the total traffic jam jackpot. Imagine the horror:

And yes, she drives a manual, thank you for your concern, yes my feet does hurt after that.

Finally we reach SP around 8:30pm, which wasn't bad at all considering a total of 5 hours' drive on a Friday before a major festive celebration. I asked Elyza to call Ah Ma to check whether she'd cook and if there are any leftovers but she nagged and replied that it's too mafan for Ah Ma to cook for us so forget about is, got out of the highway into Taman Sejati to a hawker centre.

I checked my phone there and see a few calls missed. First was Mom, so called her up quickly and before I could even say hello, she was hankering the whole way through, "How come didn't answer my call? Don't know how to call already ar? Blah Blah Blah." Told her impatiently that I was driving that's why didn't hear and didn't pick up the call loh. Mom said Grandma did cook a bunch of stuff and asked us to come over quick.

Luckily I didn't order yet, so we just finished Elyza's lor bak and lor mee and headed for Grandma's.
Yumz! Because that was also Ah Ma and the other Aunties went to pai pai at Ah Kong's humble condo, so there were the usual tu tor th'ng (pork stomach soup, ohhh melt*), jiu hu char with lettuce and sambal belacan, lor ak + hard boiled egg, (hungry d T-T) but I didn't take any pictures lar, cos I was too tired and blardy hungry d...

I applied for a whole week off work for CNY! Snapped a number of pictures but completely forgot to pack my camera cable together lol. We'll see if Elyza has a similar cable later so I can upload them. 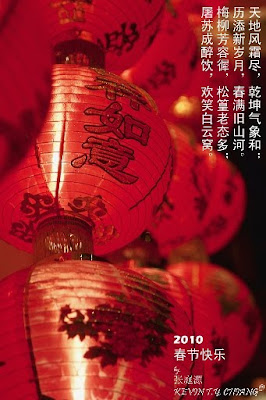 Posted by Giffo Hoots at February 15, 2010
Email ThisBlogThis!Share to TwitterShare to FacebookShare to Pinterest
Labels: Occasions