On Sunday, which is the 8th day of the Lunar Calendar, and also coincidentally Teen Yuen's birthday according to the Chinese calendar, I was invited to have dinner with TY's family. The whole bunch of them from Kuantan will be travelling from Kuantan early morning and then we will meet up in KL.Korean food @ Ampang! :D 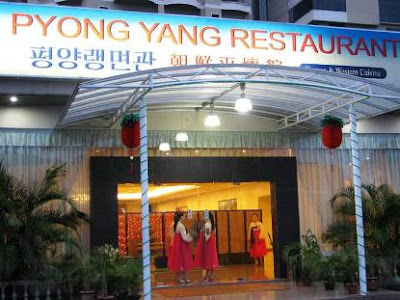 I suppose it's sorta like a high-end Korean restaurant. Dinner could fetch up to RM50-100 per pax.Arrived at the restaurant close to 7pm I think. There were two sections that made up the seating area. A half consists of tables surrounded by partitions to ensure privacy, and the other half of a large open area with a stage in front. To my surprise, only a handful of tables were occupied then. But I guess it's still very early.The waitresses in the restaurants are from Korea and it certainly lends a hint of authenticity to the restaurant. All of them are very sweet looking, with fair and smooth skin (makes you wonder whether they have gone under the knife - at least 75% of Korean women are known to have performed cosmetic surgery. 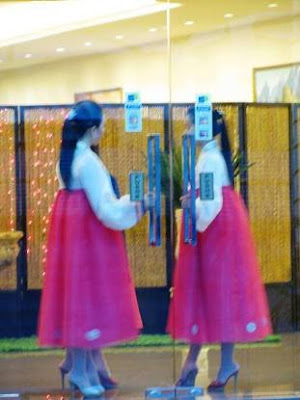 Check out those heels the girls have to put on under their han-boks. Can you imagine walking in these all night long? lol. But after a quick calculation, taking off the heightened platform of the heels, I estimate the heels would come to about 3 inches high. 4 inch would be a killer, 3 inches - tolerable but definitely sore at the end of the day. Wei En mentioned that these girls have been trained in Korea and are sent over to Malaysia for a limited period.Our table has been reserved and it happens to be the very front one just by the stage. The elders did the ordering while we young ones were snapping pictures or crapping. 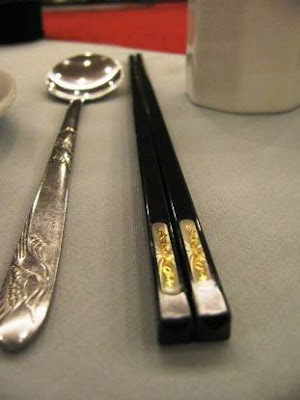 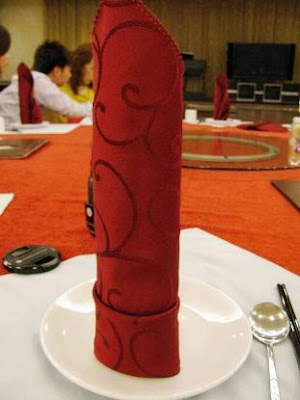 By the way, did I mention that taking photographs are prohibited from being taken in the restaurant? I didn't know until 3 quarter of the meal was over. 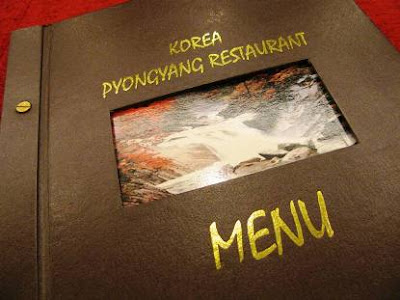 I can't recall the names of the dishes served in this restaurant, so I went on a mission to search for the menu and to my dismay, an official website is lacking and I even stumbled into a few blogs which mentioned of the place, but had difficulty capturing photos of the food, and even shots of the menu lol. I guess I was slightly a bit more lucky because some of these bloggers were already stopped from photographing before stepping into the place, whereas I had the opportunity to take multiple shots of every dish except 1. Oh, make that 2. Didn't take the dessert (watermelon slices) simply because it's not special enough to be captures ;pAnyway, attempts to research more on search engines were futile, some leading me into histories of Pyongyang (a town in NK) or location of embassies. Bleah. I'll just try to describe the dishes in my own words la. I also found out that Pyongyang is billed to be the only North Korean restaurant in KL.

First to be served were some small side dishes (banchan) so accustomed to the Koreans.

What I don't like when these small plates are served is that, they are all placed far apart in between and seated in such a huge round table, I had difficulty in trying out the other dishes, lest I look like a glutton reaching and stretching out my arms with my chopsticks flinging across the plate at the far end. 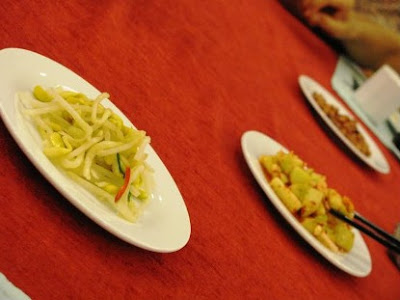 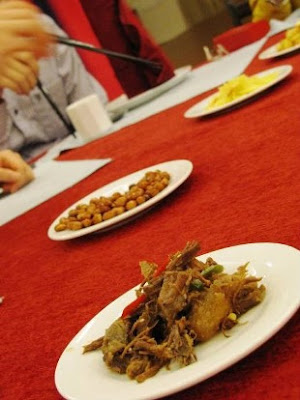 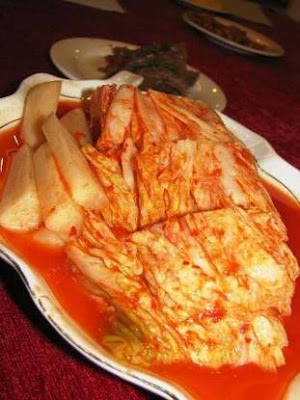 Kimchi. (Truth be told, I don't think I can detect much difference on a possibly RM10-20 plate of Kimchi sold in a high end Korean restaurant to the RM4 a jar Kimchi sold in Tesco. Sourness level possibly the same. Maybe my taste buds a bit tak bley pigi). And you can't argue on the freshness cos, kimchis are fermented for a period of time... so I guess we're paying for the ambience? But anyways I did not have to pay for dinner so.... however that will make the whole post sound dumb (like, this is alright la, since I don't have to pay for it...) ok I am being a complete cheong hei, so let's move on damnit. I'll pretend like I paid for it la, just because. 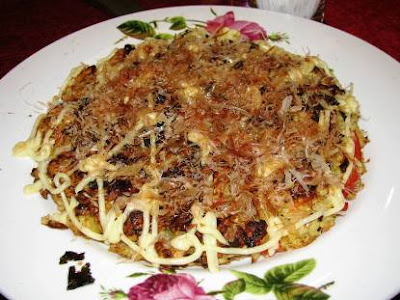 This is one of my favorite. Some sort of a vegetable pancake (I think) topped with bonito flakes (katsuobushi). 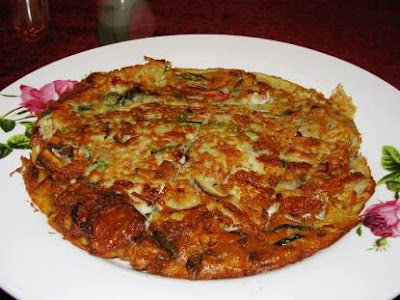 A form of omelette fried with a chockful of starch. Nothing special I think. I also can make:p
Meat dumplings. Okie okie lor. 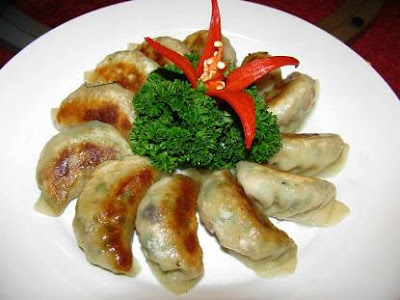 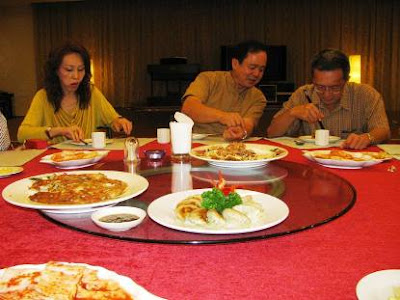 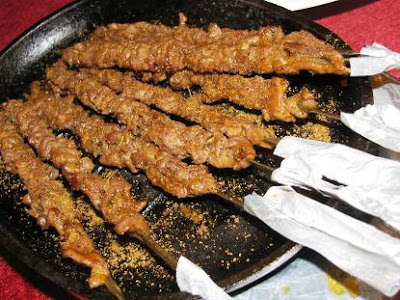 Grilled beef skewered over foil. This is very yummy too. I'm not sure what sort of herbs and spices they marinate the beef with, but they're doing a good job. Add with a blob of mustard and you're good to go! By the way, beef are considered to be prized among all meats. 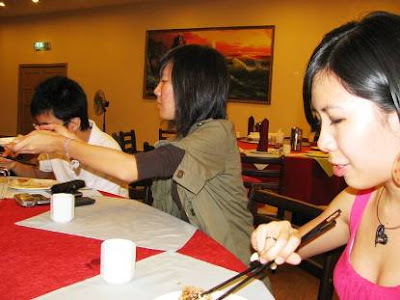 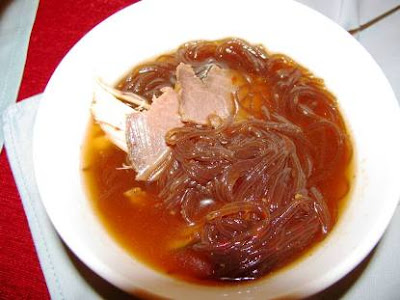 It is served cold and typically cold dishes (some mixed with ice cubes) are taken during winter and is believed to balance the body temperature. Weird eh? I would do it the opposite way. Whereas during the summer months, the Koreans have something spicy pulakz. 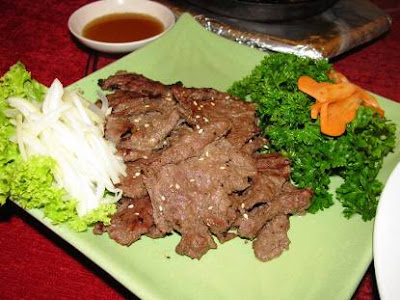 Ooooh! This is also another fave of mine! BBQ-ed beef strips to perfection, sprinkled with sesame seeds, immerse in the sauce plate, add a li'l bit of raw chopped onions and yummmzzz. 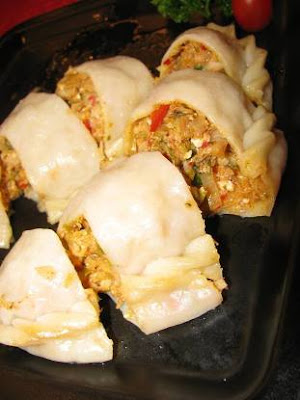 Erhh... This is a bit dumpling-ish, loads of stuffing which I cannot recall, I know it kinda reminds me of otak-otak but not quite.... no fish in it, meat, some veg and some sort of herb or what that creates the yellow color. 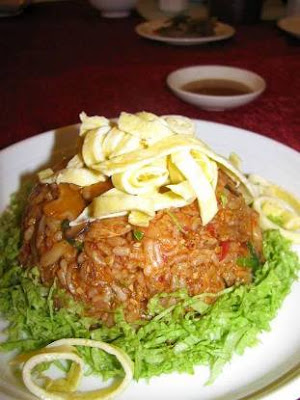 Kimchi fried rice! I also know how to make! :p Okla to be fair, Pyongyang's version of fried rice seems to be much wetter. But my version uses leftover rice (as should be done for fried rice, or you end up with wet rice) and I put in more ingredients into the rice ok... costs less than RM10 per plate ;) But it's good la anyways :D 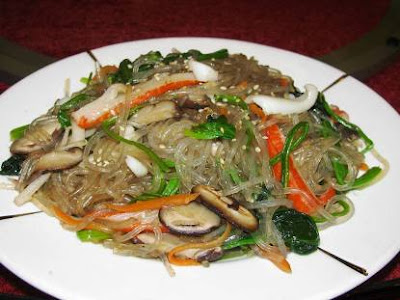 Then makan makan halfway d, the Korean waitresses came out on stage and started performing a Korean dance. Again, I sneaked a picture.

The girls are definitely very pretty, and are pretty graceful. I do notice that they change into lower heels for the dances. 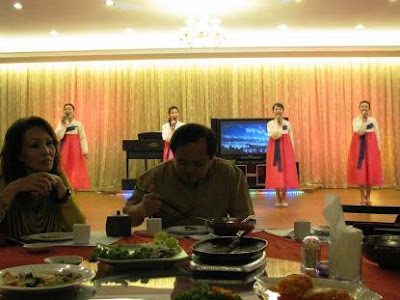 Then after dancing with the fans, a few of them started to sing Karaoke on stage. 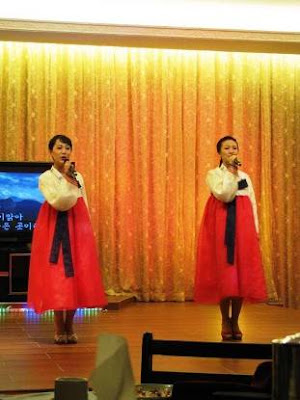 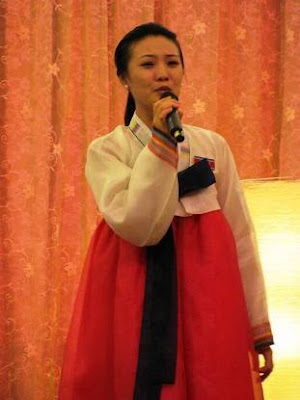 When they started to sing, they made all this kind of cliche moves, some like very emo, some like the dong dong chiang MV you used to see 15 years ago, like very practiced moves and not natural liddat, you know?
I think that they should have stopped at the cultural dance. Even the songs that they sang also are English (Barbara Streissand)..... But I do think that uncles or kam yu lous would love to see them perform... I mean no offense, these girls are memang pretty, polite, graceful and all that, but the singing is totally unnecessary. They remind me of an extremely loud and outdated Chinese wedding dinner. 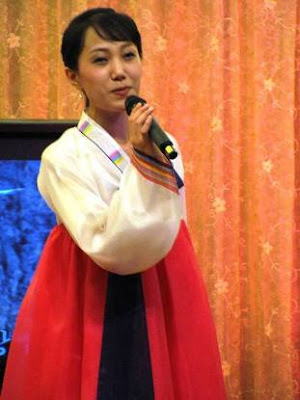 Okies, a couple of group photos!
Not exactly the whole group, those are with TY (darn slow in editing...) 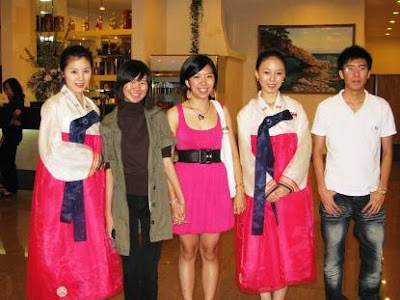 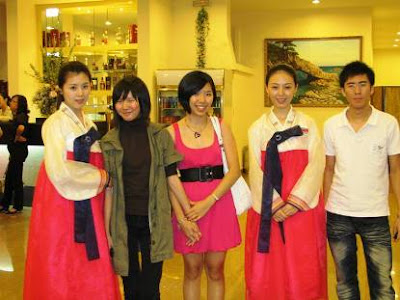 and a different mode.
Happy tummy ^^