Ah, the City of Lights, the City of Love - or whatever euphemism you have in mind, Paris is one of the most vibrant and intriguing cities I've been to. 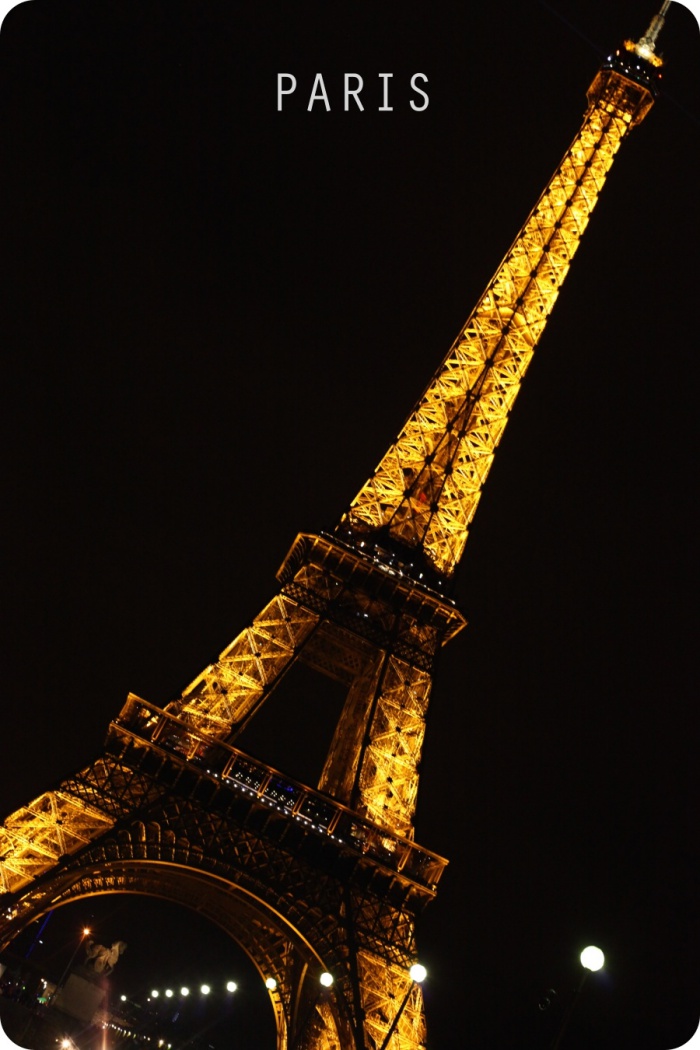 In preparation for the trip, I'd attempted to refresh my memories from past French classes to some insignificant degree of success :) Which really isn't a big deal as many Parisiens are able to speak English (if you ask nicely!). The metro is a maze of network and confusing even to try and use the machines to buy tickets!


Weather wise, we were lucky. Smack in the mid of summer time and it wasn't too warm even with the heat wave sweeping through Europe. It was fairly pleasant on the first two days we were there- flip flops and shorts kind of weather. After a couple of weeks when we came back, it started to get cooler - windy and bit nippy at temperatures hovering around 12-15 C. 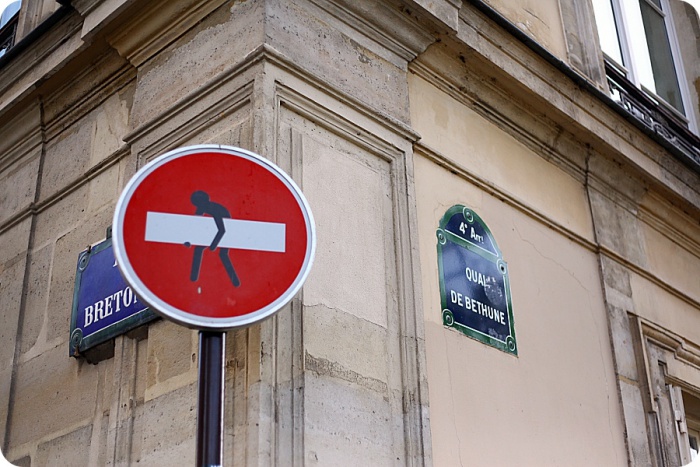 I absolutely loved the city - brimming with energy, full of character, and plenty to see and do. The beautiful buildings are tastefully designed, quirky signs and art add colour to the drab of a city.

After Paris, going to a neighbourhood in Singapore (concrete slabs!) is going to be an absolute bore! Don't get me wrong though, it's not quite rose-tinted glasses, the subways in Paris are filthy and stink of pee, garbage littered all over, dog poop on the pavement... but it IS a city - that's that you would expect to see .... unless you're in Singapore. 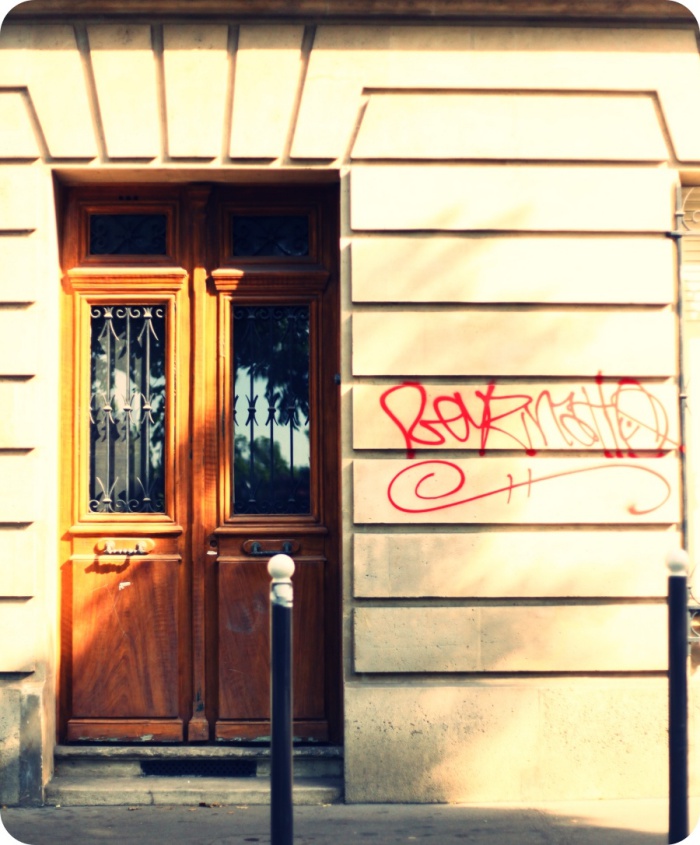 Day 1 we were there and hunting for breakfast - we were already awed by the most delicious baguette (with toppings) we've ever tasted. A delightful crunch on the outside, and soft on the inside. The cheese was fantastic, the meats were incredible, and the coffee was..... errrr, drinkable. 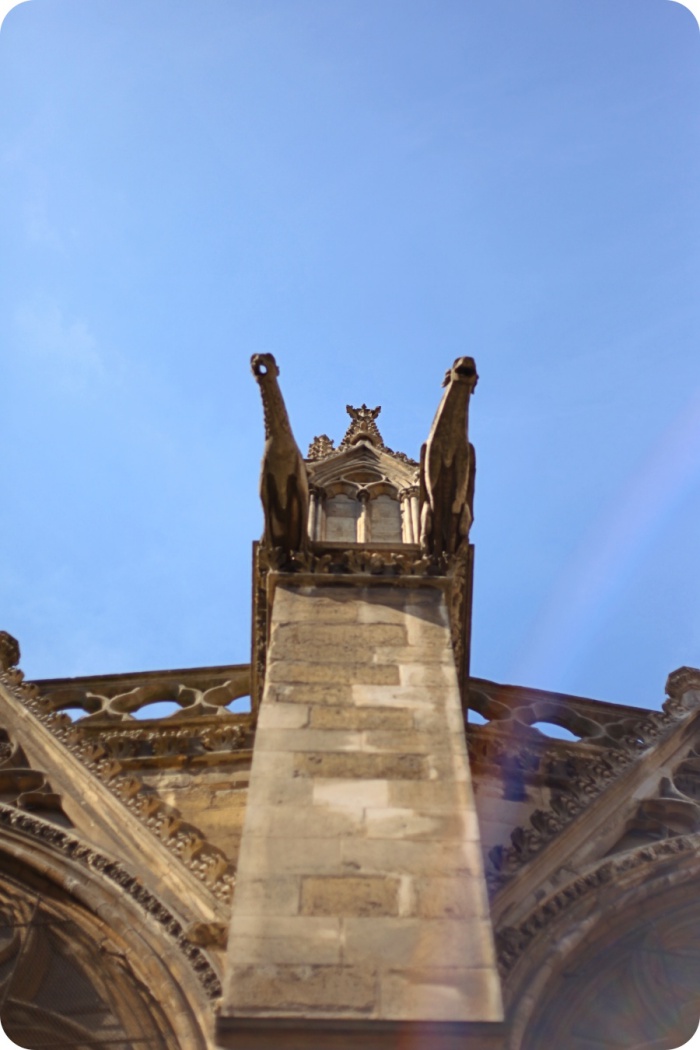 We did the usual touristy trail - started off towards the Iles (islands) smack in the middle of Paris, and then to Notre Dame, which we did NOT get in ;( , the queue covered from the front of the building and through the entire side of it! As much as I'd like to see the famous statues, an hour long wait is too much time to be wasted standing in a line! 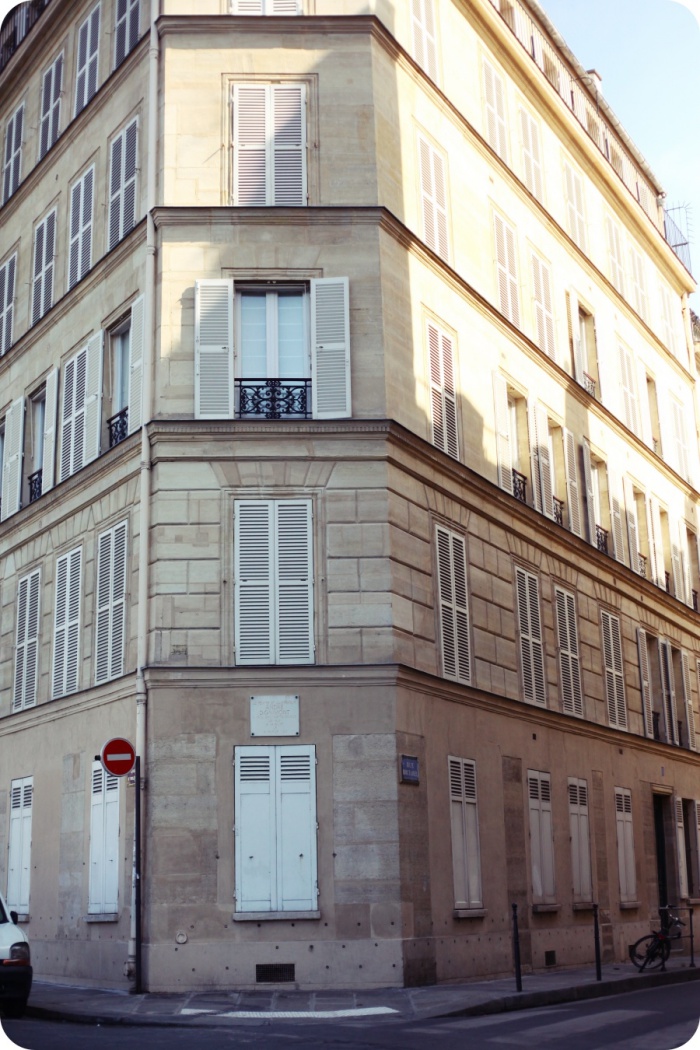 Paris is a huge city, and getting around by foot took a while. We were walking like I've never walked before. It became excruciatingly painful for me to continue as my sandals started rubbing against my toes and chafing my front soles. I started to whine and V brought me to the Galerie Lafayette aka marketplace! There are even queues to enter Chanel and a large resting area which seated 99% Chinese - these are mega shopaholics! Digressing, on the way out of Europe and getting our tax refunds, we eyed a number of Chinese with a chockful of receipts while we clutch onto a measly few, hehe.


We only figured out the next best thing to do is to get on the city bikes scattered all over the city. 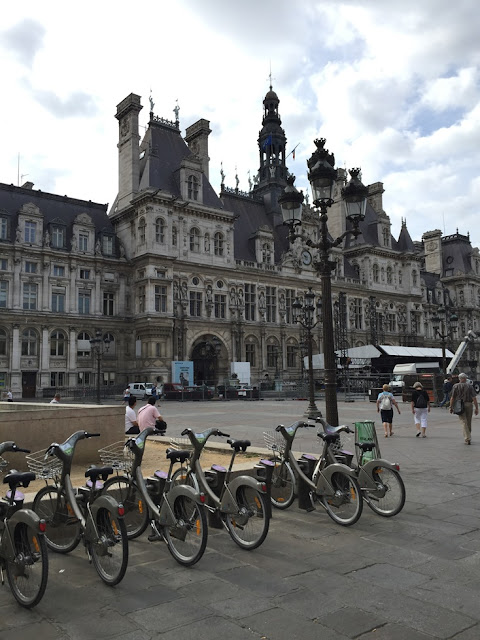 Which is easy enough - wherever you see this bicycle station lined with city bikes, go to the "meter" and navigate the options from there (English available!). You'll need a credit card to get the registration done, and it spits out a receipt with your booking number on it. You'll need this number everytime you want to take a bike out.

At only €1.70 with a validity of 24 hours, it's a handy system for getting around the city. There's a catch though: each time a bicycle is taken out, it is free for 30 minutes. If you exceed that time limit, an extra charge of approx €1 is billed for every hour extended.

The famous Berthillon ice-cream in the Île de la Cité, one of the must-dos in Paris. Perfect by mid-day as it started to get warmer. 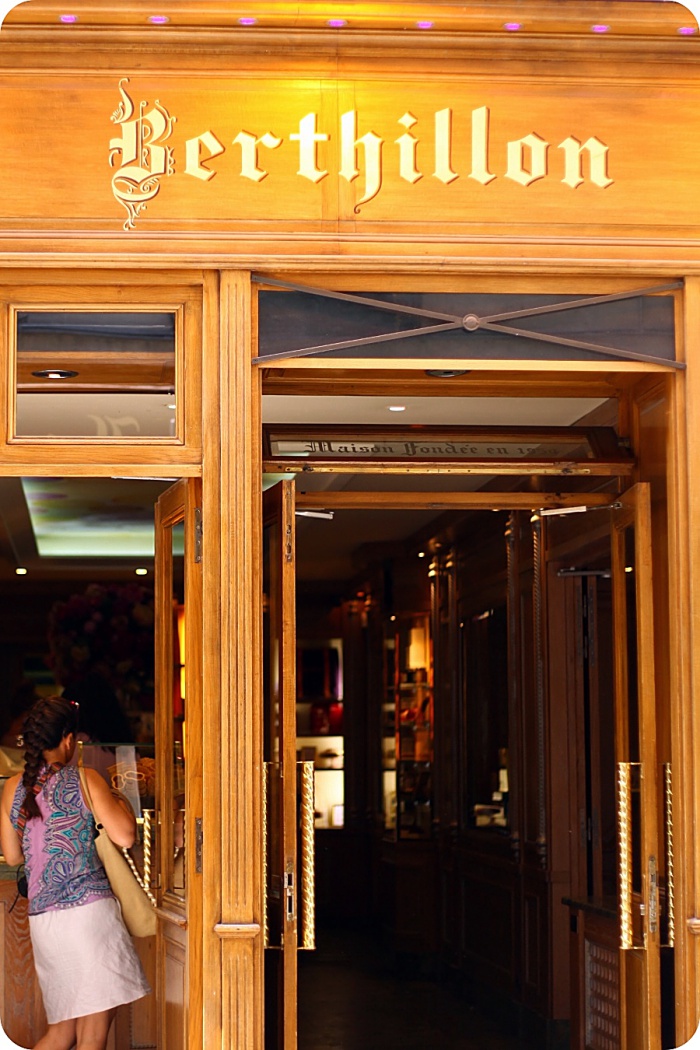 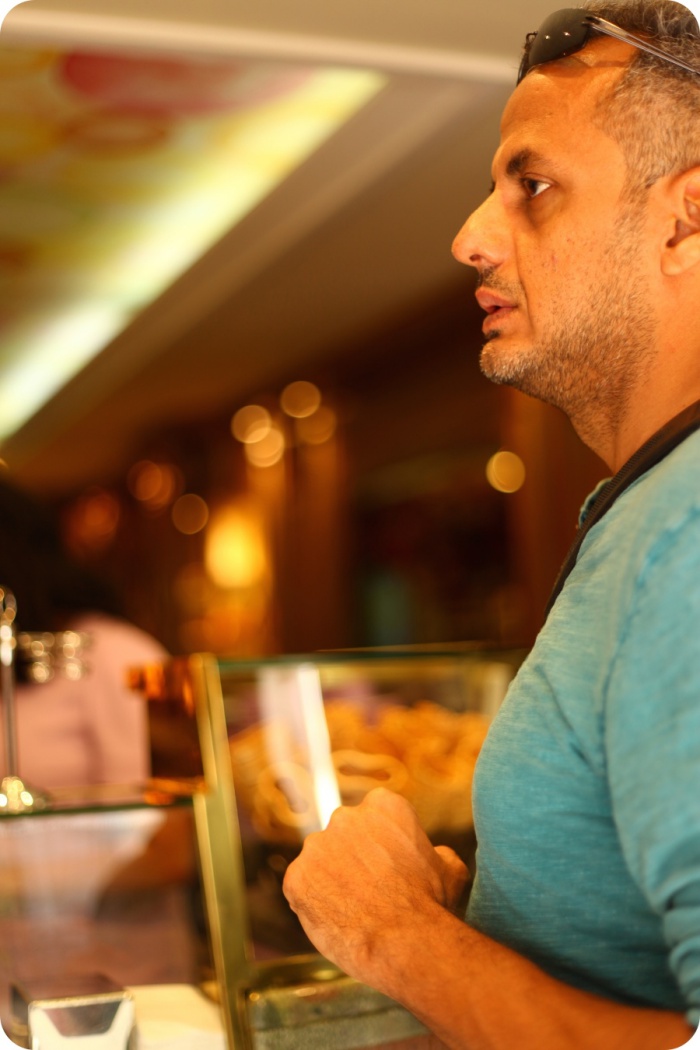 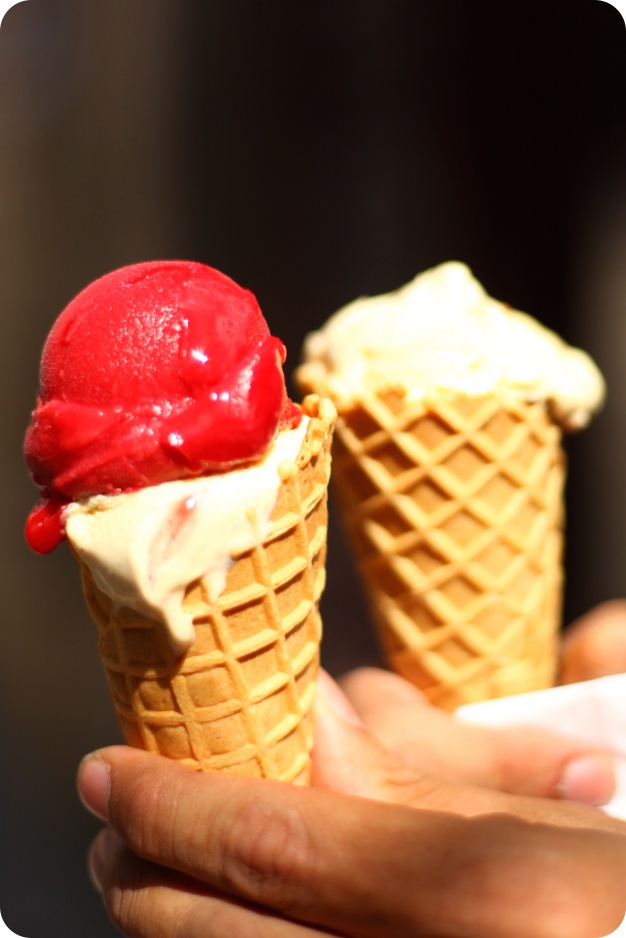 They do look very appetising in the photos, don't you think? It wasn't all that fantastic or mouth-wateringly epiphanic ice-cream. I had vanilla ice cream and berry sorbet on cone, because the mighty interwebz sang praises for their sorbet. They were nice, but not fall-to-my-knees-and-worship nice. 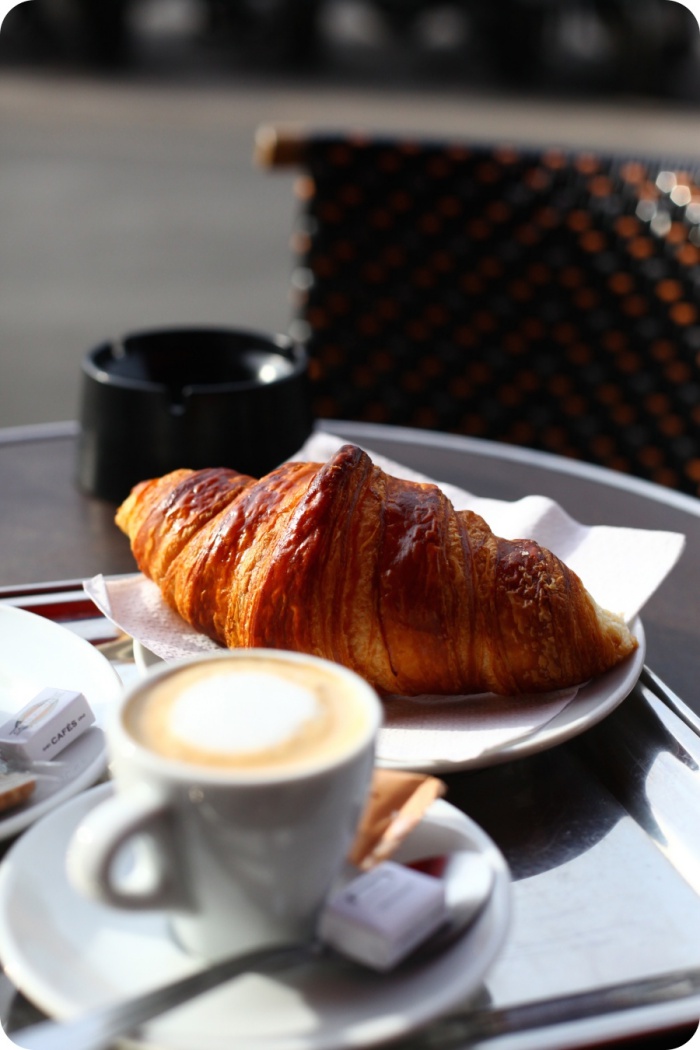 I can completely understand the culture of sipping coffee by the pavement and watch the world go by. People-watching is actually interesting in Paris. The spectrum of individual characteristics is broad, from the tattooed, pierced Goth to the fashionably chic. I could do it for hours (except that the coffee is pretty meh here....)!

Another obvious itinerary while in Paris is to visit the museums. But the idea of being cooped indoors when it's a beautiful day out just doesn't appeal to me. Still, we are talking about the Louvre here and that in itself is an exception to the rule.

First thing we saw as we approached the Louvre: crowds of people (each one of them taking photos of themselves pinching the tip of the Louvre - very original), and an even bigger crowd forming a long snaking line to get in.

A sign beside the start of the queue stated a one-hour wait to enter the Louvre. Another sign gives priority to pre-purchased tickets, something that has escaped my mind. Silly me, I have underestimated the queues! I was gutted, especially after I'd missed Notre Dame also because of insane queues. To add insult to injury, it was a Sunday and possibly the best time to visit a museum as most other attractions/businesses are closed.

We both agreed we will not waste our holiday in a queue and as we were planned to be back in Paris 2 weeks later, it was a unanimous decision (albeit grudgingly) to skip the Louvre and save it for the next time. 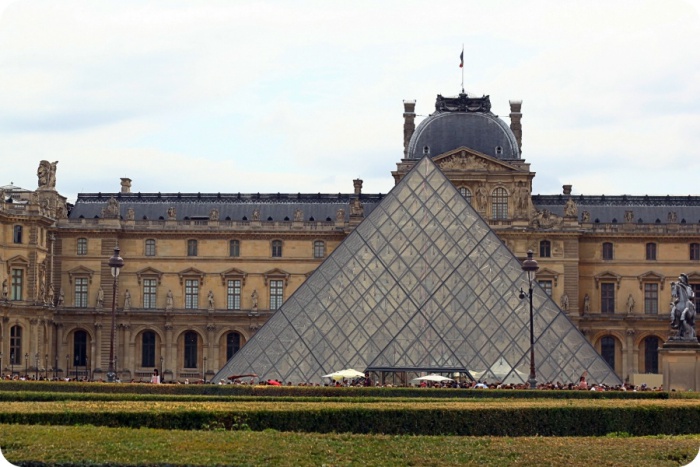 I trudged sulkily along, and could only manage to smile for the camera, hehe. We strolled on the grounds and was about to head for the Champs Elysees when we came across another entrance to the Louvre! At first, we weren't sure, as the entrance says Pont des Lions and we thought it was another separate museum. So we went in regardless (as a consolation to missing the Louvre) and it looked like an extension to the Louvre. I asked a staff and yes it is!

Wow, we just found a secret (ok, lesser known) second entry to the Louvre without the hassle of a queue! Superb, we rubbed our hands in glee and set to check out the art collection, while ensuring a thoughtful expression is maintained throughout (the trick is fingers rubbing chin lightly - works better if you have a beard). 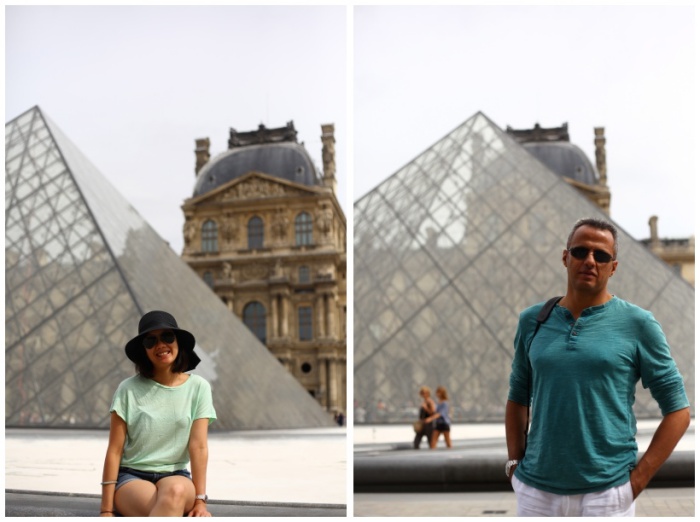 Stemmed from our stubborn refusal to stoop as low as purchasing a selfie stick, this side by side photo will have to do.

Sneaked this photo of a massive crowd ogling at the Mona Lisa. They actually placed the painting 7m away from the general crowd. The more hilarious aspect is how people honestly believe by zooming in and capturing a photo from THAT distance can benefit them in any sense? I spotted a few trying to take selfies with the famous painting, too. Heh.

And then photos from 2 weeks later when we were back to Paris - and visited the iconic Eiffel Tower! 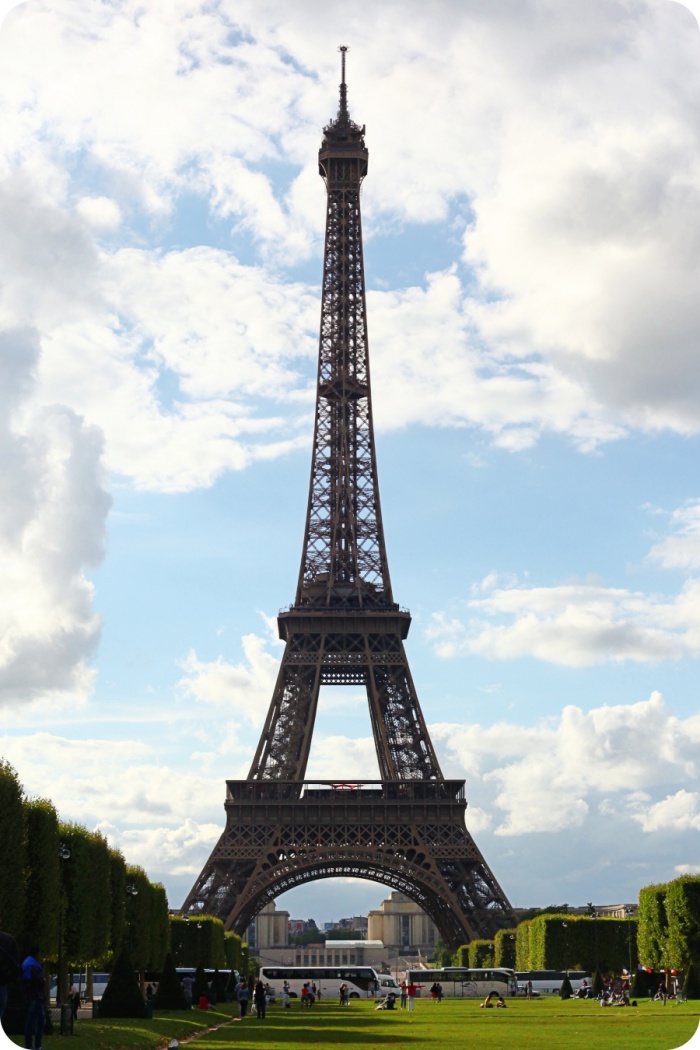 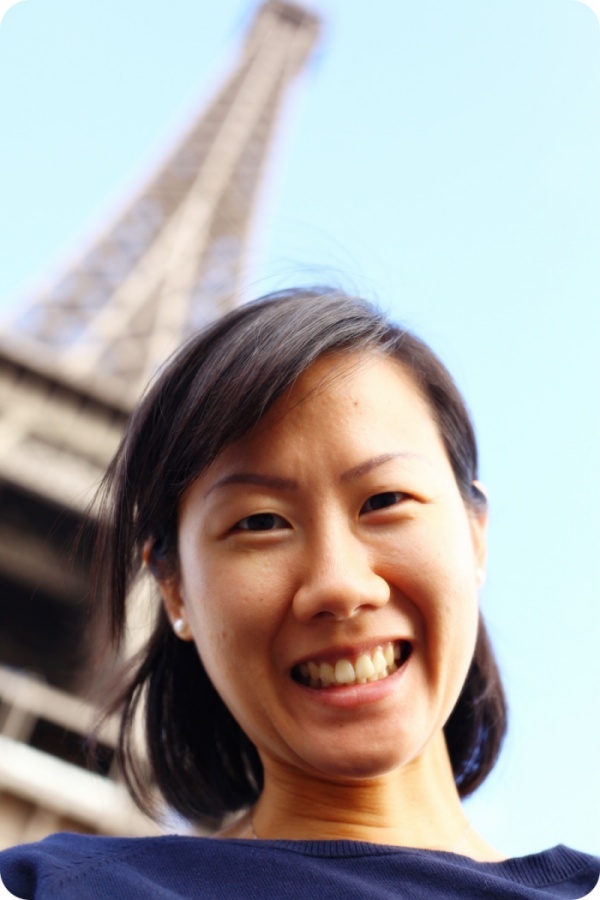 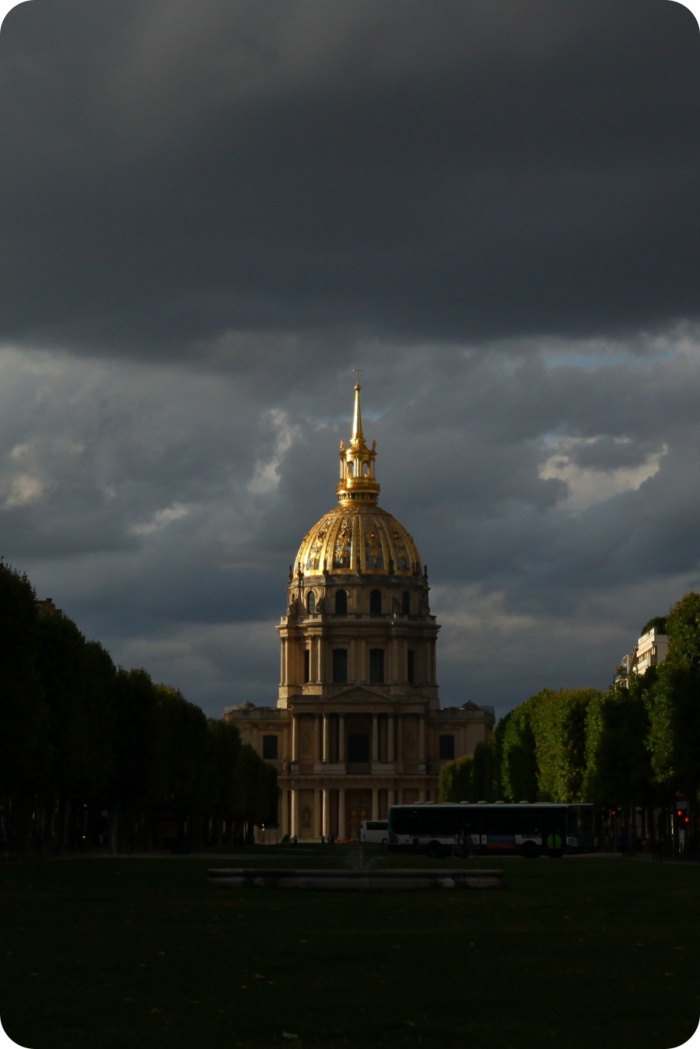 An overcast, moody skies gave way to a slice of sun ray, giving this building a golden moment.


One of the most defining moments in Paris - we were cycling and headed towards the Louvre when we passed by a small group of people playing classical music. That is such a treat, we cycled over, listened for a good 10-15 minutes before resuming our journey... 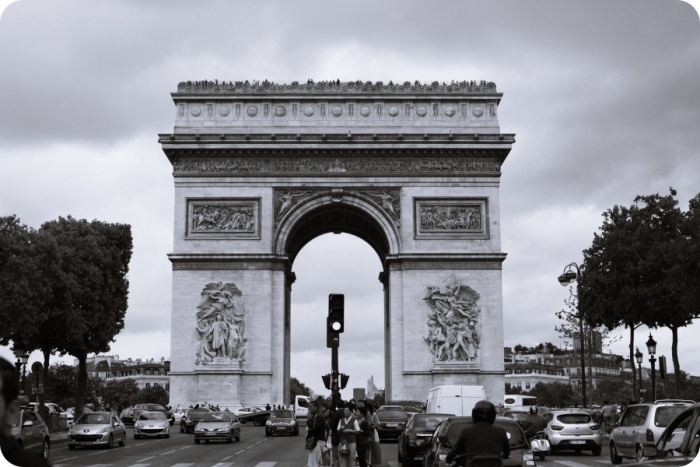 And one of my favourite shots of the Arc de Triomphe. 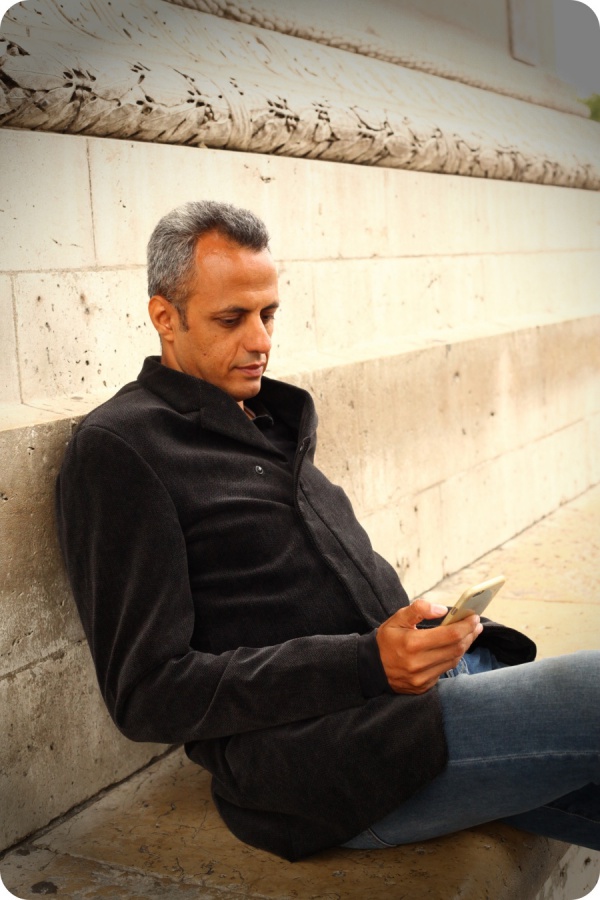 And my favourite person with his inseparable phone.

The underbelly of Arc de Triomphe 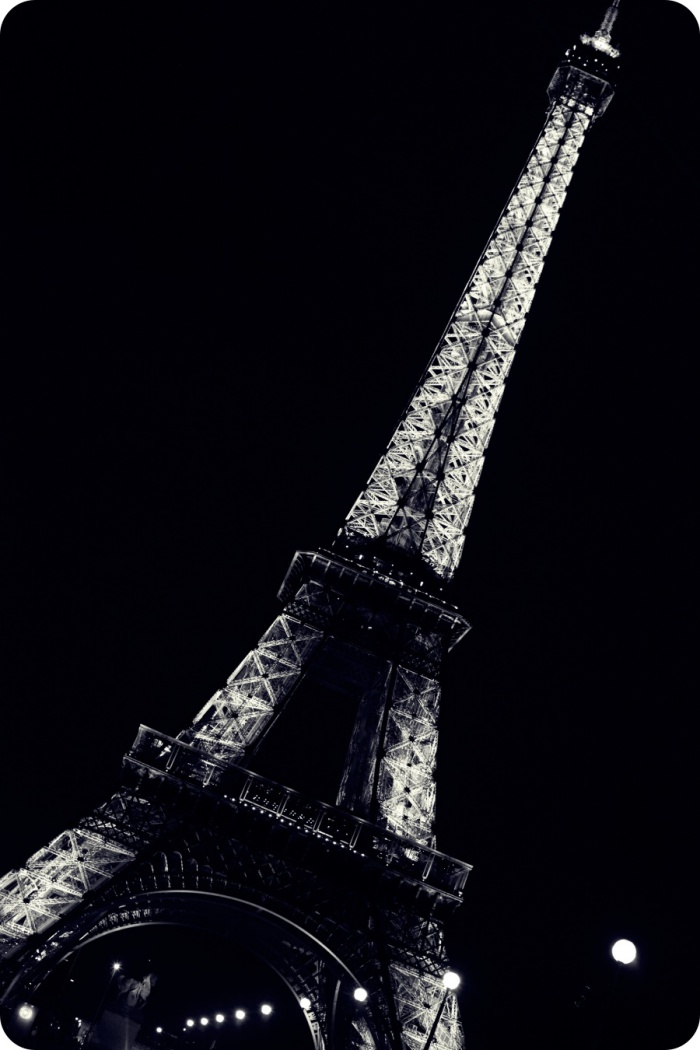 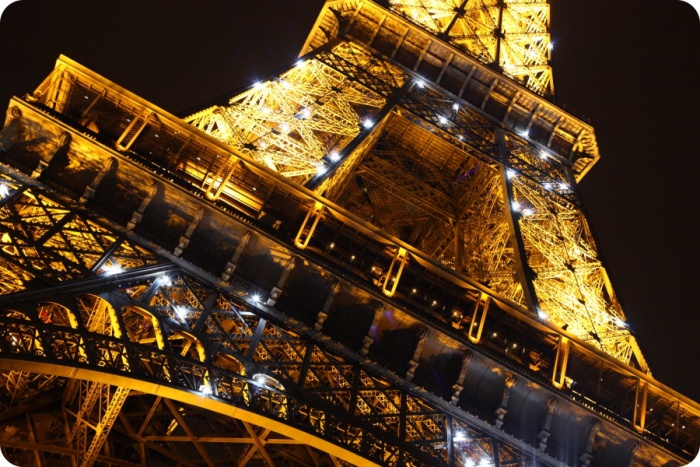 At every hour, the giant tower sparkles and glitters with a thousand light - it was magical and hard not to fall in love with the city.

We went on several mind-blowing foodie excursions around Paris (our itinerary revolves around eating, sightseeing is secondary)- quite an experience! See them no particular order:

- The much hyped Frenchie To Go

Posted by Su Yin at August 22, 2015
Email ThisBlogThis!Share to TwitterShare to FacebookShare to Pinterest
Labels: Around the world - Europe, Clicks